Cinnamon rolls are a favorite among all age groups. Luckily, cinnamon rolls are one sweet treat that is not only meant for dessert. Unlike cake or brownies, this is a baked good that is breakfast-approved. If you can enjoy cinnamon rolls and are looking for some breakfast inspiration, look no further. We have some great drink and side options for your next cinnamon roll breakfast.

Cinnamon rolls are sweet, so they work well when paired with contrasting flavors. You can contrast sweet with sour, bitter, and savory. Some good drink options are coffee, milk, and orange juice. You can add a side of fruit like apples, pears, oranges, or even a mixed fruit bowl. Lastly, if you want to add a savory element, scrambled eggs or bacon are a great choice.

There are so many different things that you can eat alongside your cinnamon roll for breakfast. Of course, you could have the cinnamon roll by itself if you are an on-the-go person. But, if you have the time, adding vitamins and proteins can make for a more balanced breakfast. We have collected for you the best drinks and sides to balance out your morning meal. Keep reading for some delicious additions to your cinnamon roll breakfast. 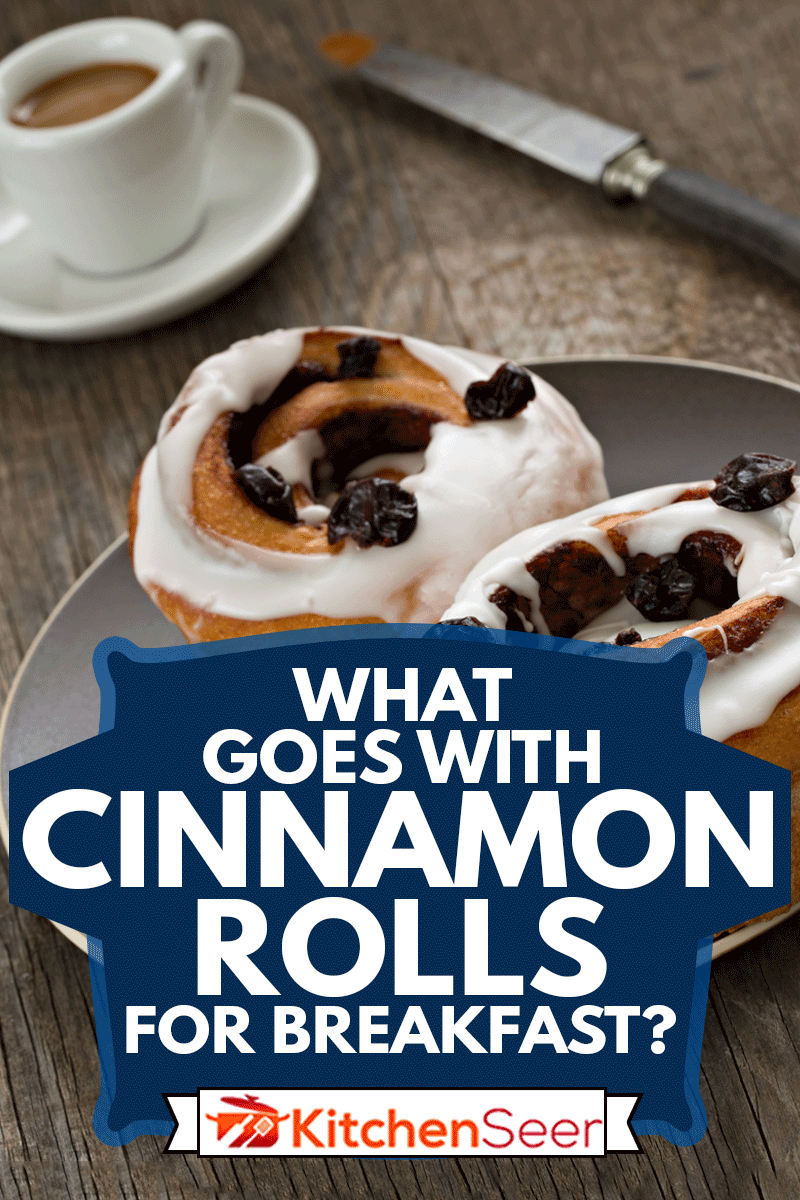 What to serve with cinnamon rolls for breakfast?

When you are enjoying a cinnamon roll for breakfast, it's important to remember that it is still, in fact, breakfast. Since this is the start of your day, you want to fuel yourself properly. Some good things to serve with cinnamon rolls are fruits and fruit juices for vitamins and contrasting flavors. Proteins, including meat and eggs, are a savory side while adding nutrition. You should avoid anything sugary like sweet cereals due to the sugar already in your cinnamon roll. 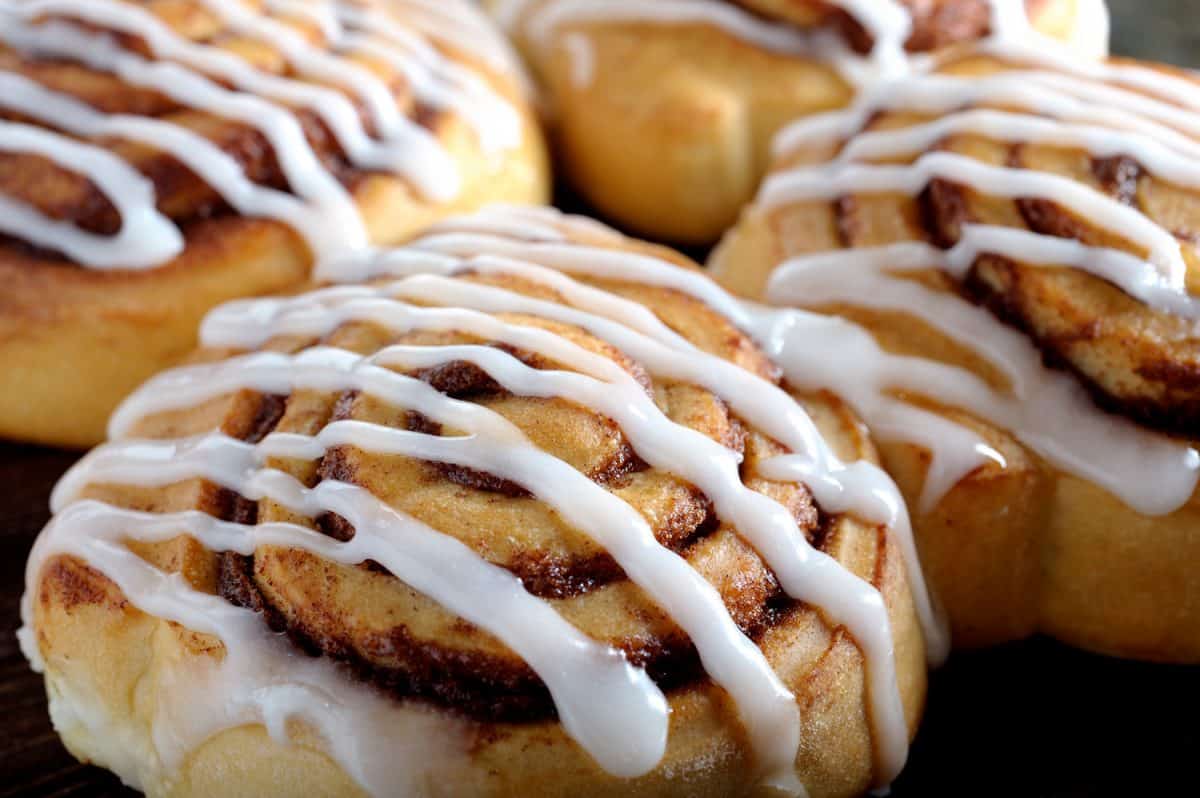 The best foods to pair with cinnamon rolls are savory or sour. It is a good way to offset the sugar in the roll and icing. The food category can be separated into fruits, meats, and eggs. For a solid breakfast, you can pick one from each group to complete your meal. 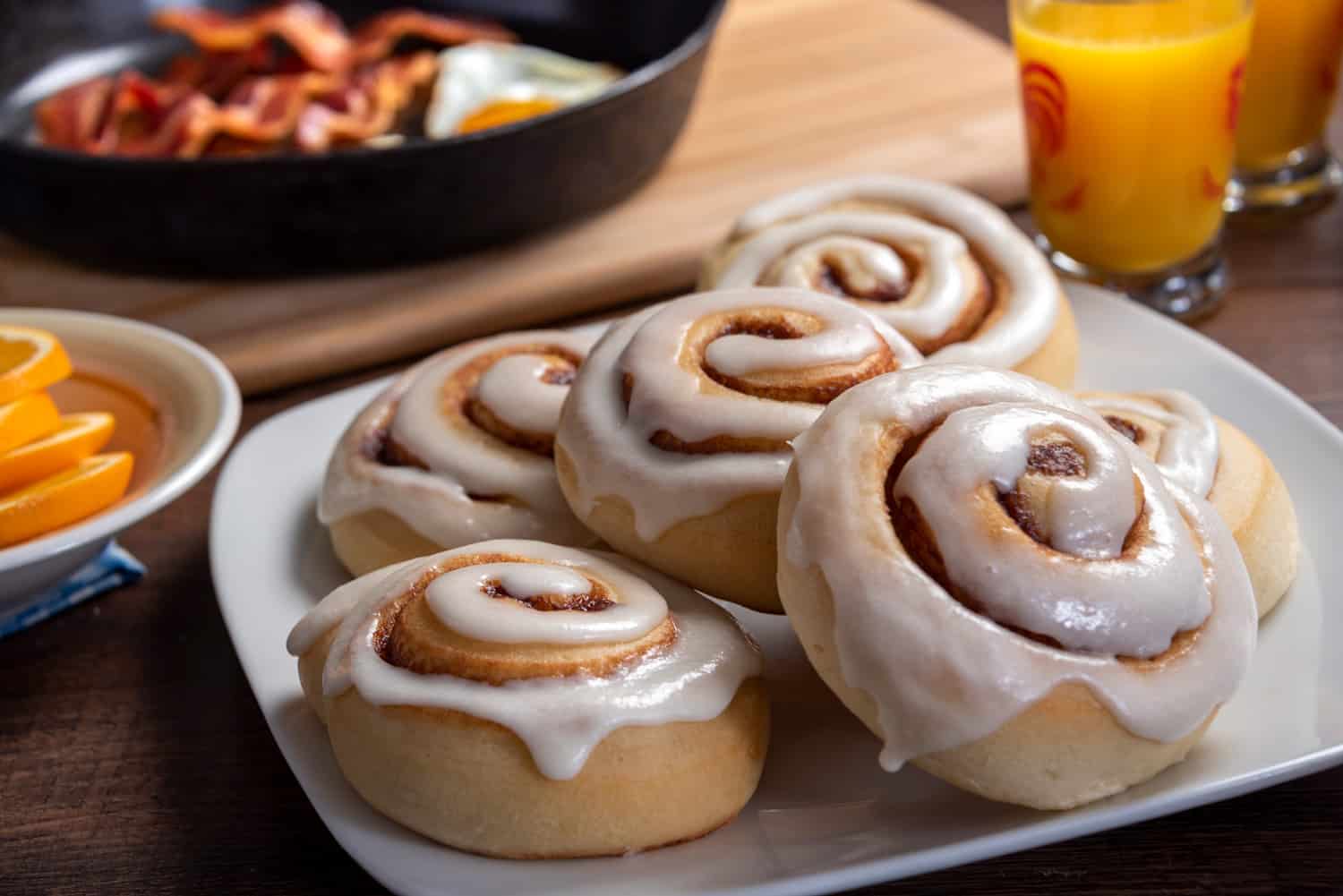 Cinnamon rolls go great with fruits. A lot of that has to do with the central spice: cinnamon. Cinnamon itself is regularly paired with fruits in dishes. Apples are probably the most popular fruit choice, with cinnamon apple being a popular flavor. Pears go nicely with cinnamon as well. You can also go for any berries, such as strawberries or blueberries. 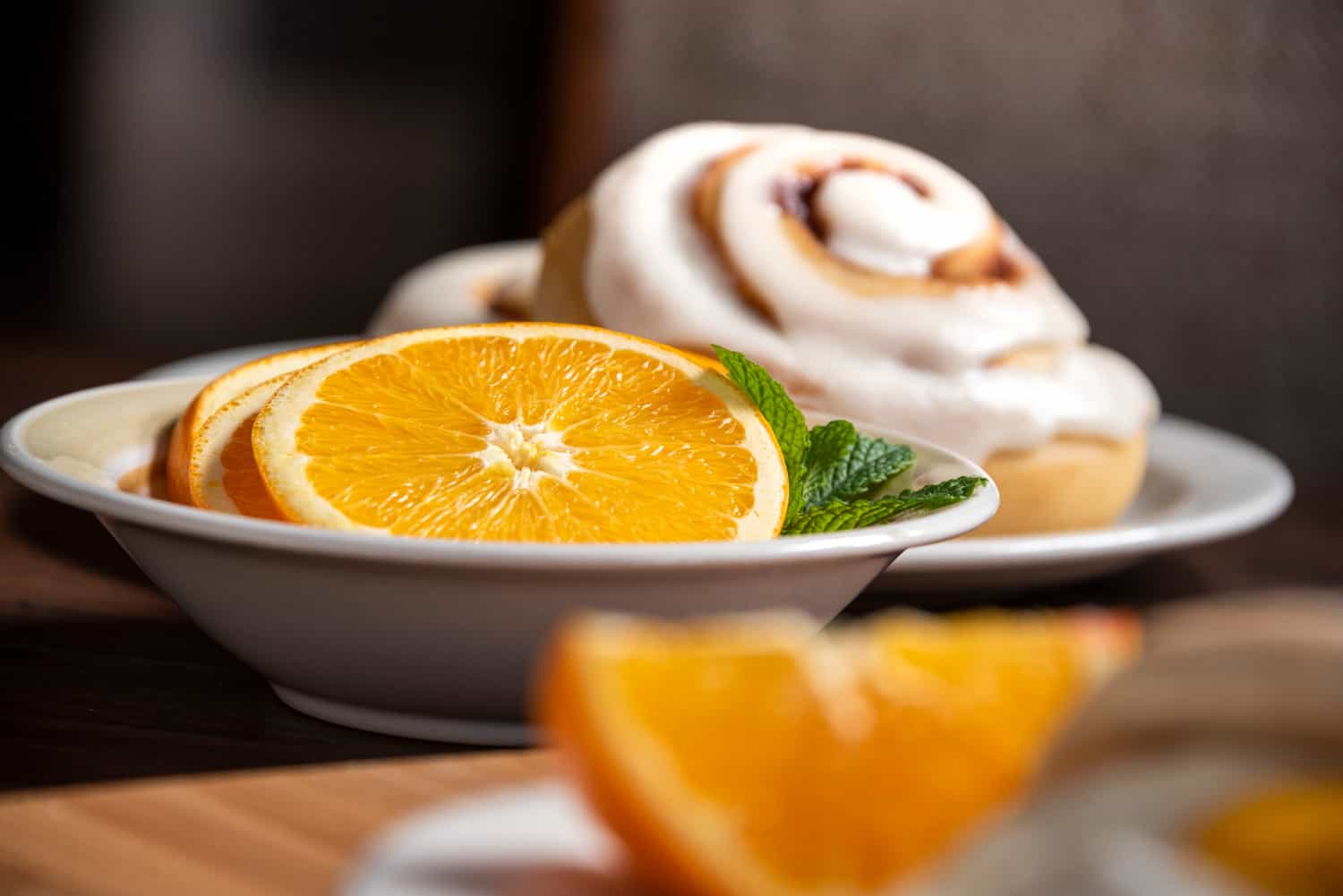 Essentially any fruit will be a good pairing with cinnamon rolls. Having a mixed fruit bowl is a good option because it includes a range of fruits. You can also citrus fruits like oranges and grapefruit. The tartness of citrus would be a nice contrast to the sweetness of the cinnamon roll. Fruits have natural sugars but also have vitamin C, which is a daily need.

Not everyone eats meat, but if you do, then you are familiar with the classic breakfast meats. Adding meat to your breakfast adds a salty and savory source of energy. Bacon is a breakfast staple and tastes amazing when paired with something sweet. Sausage is popular as well. You can also go for different flavors of bacon or sausage-like maple or something more smokey. If you are worried about the nutrition in bacon, read our article on if microwaving bacon reduces fat and calories. 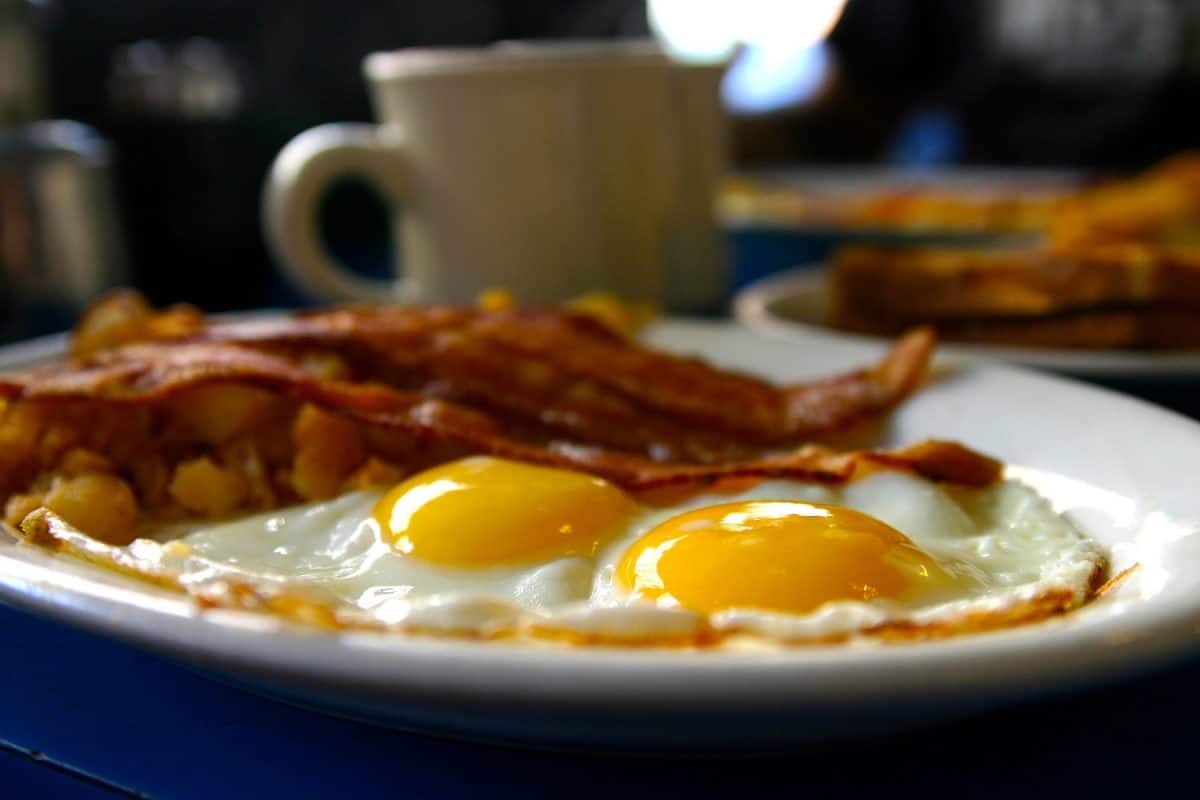 Eggs are the last popular breakfast food to pair with cinnamon rolls. They can be prepared in so many ways, including scrambled, omelet, boiled, and sunnyside up. For breakfast-time, scrambled eggs are a go-to due to how quick and easy they are to make. If you have a little time, omelets with added ingredients can be an even better option. You can combine eggs with meats and veggies in an omelet to be an all-in-one side. 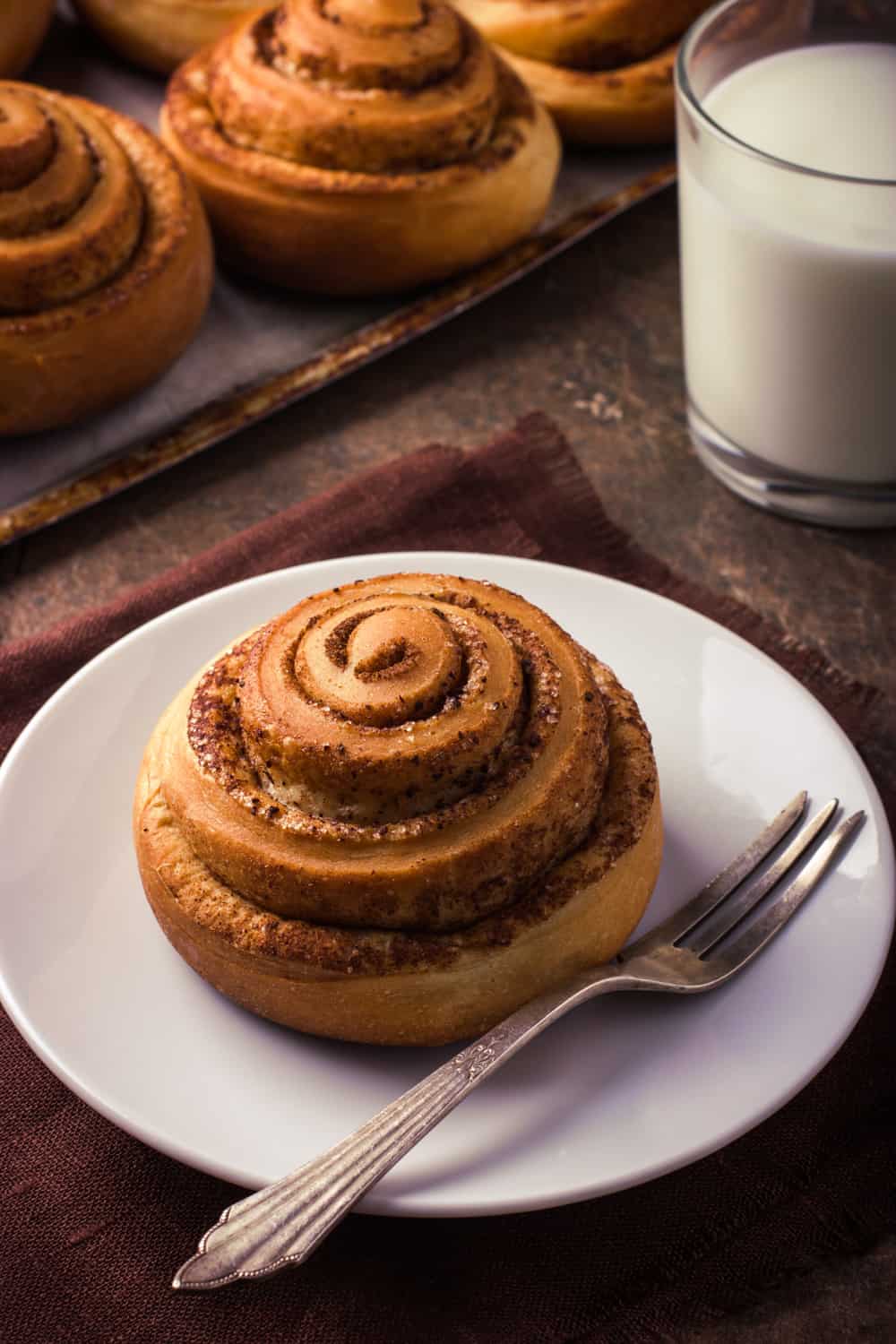 When choosing a drink to go with a sweet pastry for breakfast, you want to go for flavors that work well with sweets. Going for a tangy, neutral, or bitter drink can add variety to your breakfast. The categories of drinks include milk, coffee, and juices.

When you think of drinking anything with a cinnamon roll, milk is probably the first thing you thought about. Milk has a neutral flavor that can complement the sweetness in your cinnamon roll. Non-dairy options like oat milk, soy milk, or almond milk can have the same effect. All of these kinds of milk are available in different flavors as well. You could switch it up with chocolate, strawberry, or vanilla milk.

Coffee and sweet pastries are a match made in heaven. You can sweeten up your coffee if that is your preference. Flavored creamers like hazelnut and french vanilla go well with cinnamon.

When going for creamers, one thing to consider is that having a slightly bitter coffee will enhance sweet tastes. So next time you have coffee with your sweets, try a little less creamer and see how different the experience is. 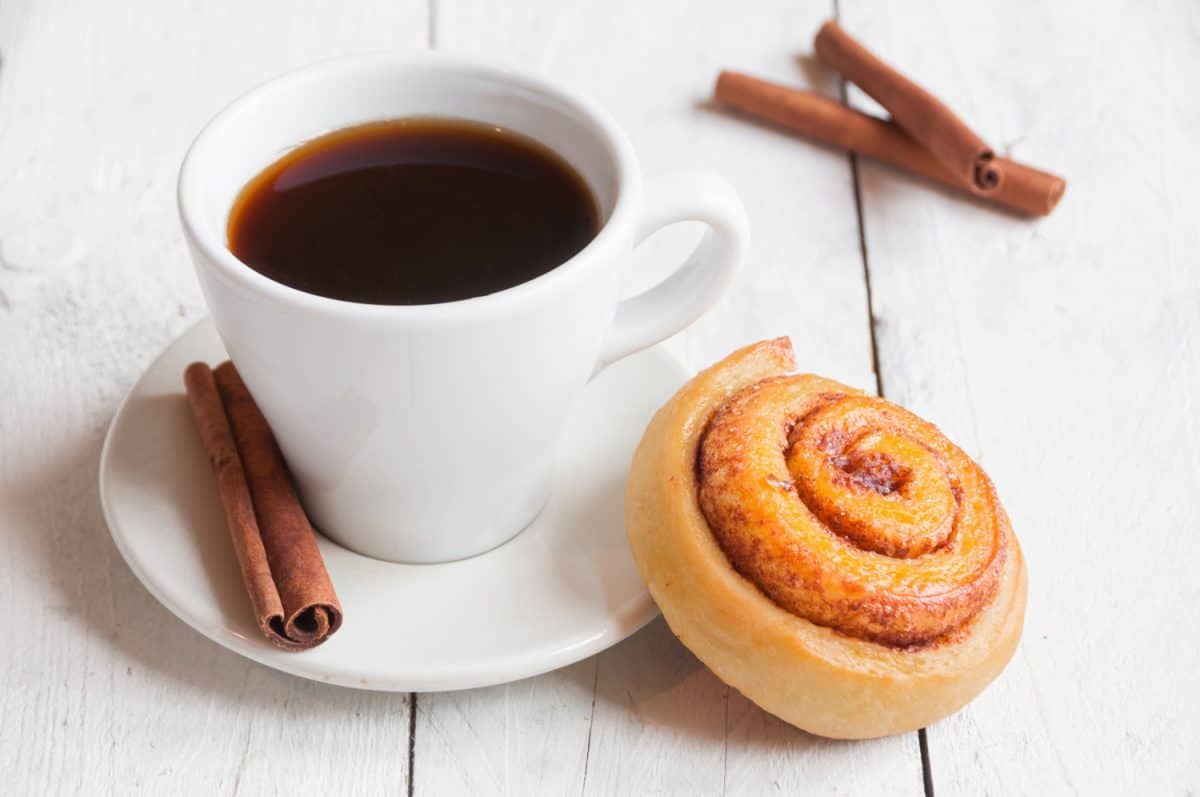 The juice options similar to the fruit options are endless. You can have apple juice, orange juice, and just about any other fruit juice. The only limit is your flavor preference. Something to take into account is the relationship of the flavors. Just like bitter coffee, tangy juices like orange juice will make the sugars in your cinnamon roll stand out. 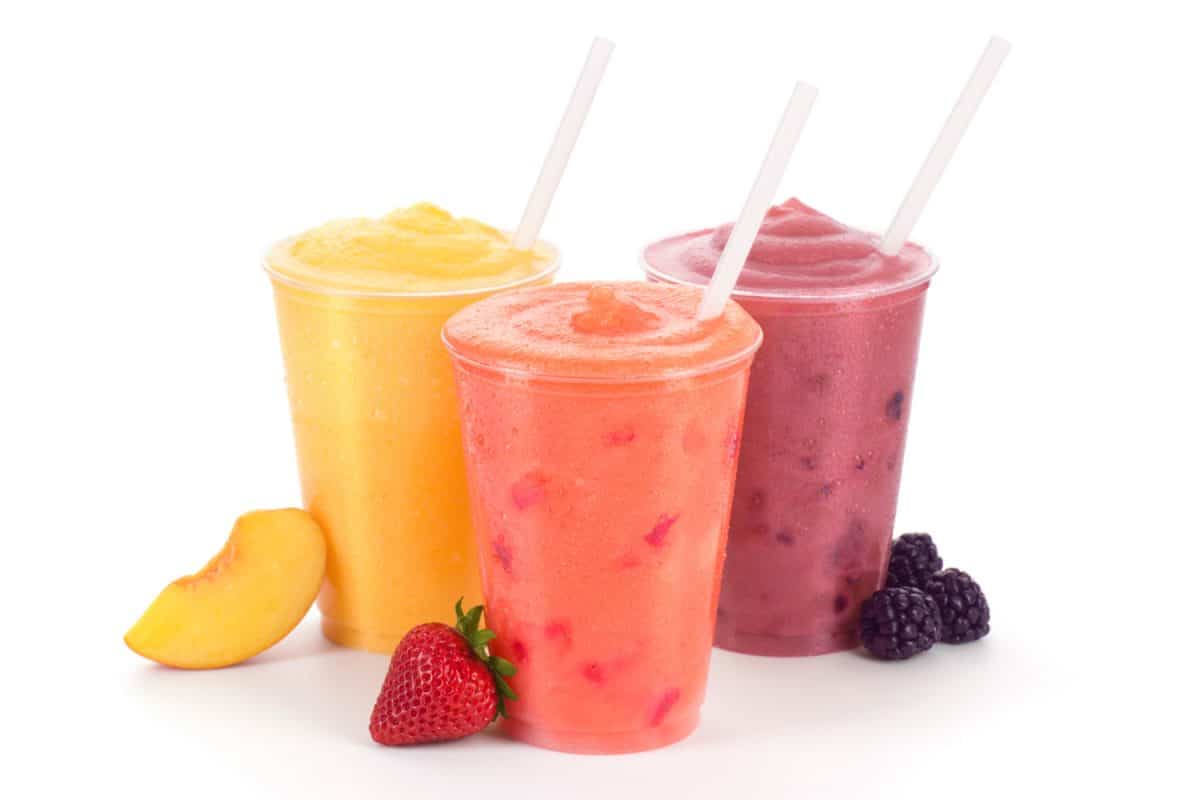 Smoothies are another all-in-one side/drink that can fuel you up. The great thing about smoothies is that you can hide added nutrients in them. For example, if you were to make a strawberry banana smoothie, you could add some spinach or other greens for added nutrients. The best thing about this is that the taste is not very affected by the addition of greens. You can add a healthy twist to your sweet breakfast.

How do you spice up cinnamon rolls?

Cinnamon rolls can be spiced up in a few ways. You can add nuts on top of the icing for an added crunch. Slivered almonds, chopped walnuts, or sliced pecans would pair well with cinnamon rolls. Fruits can also be added during baking to add another dimension of flavor. You can add small chunks of apples, peaches, or blueberries for a flavored cinnamon roll. 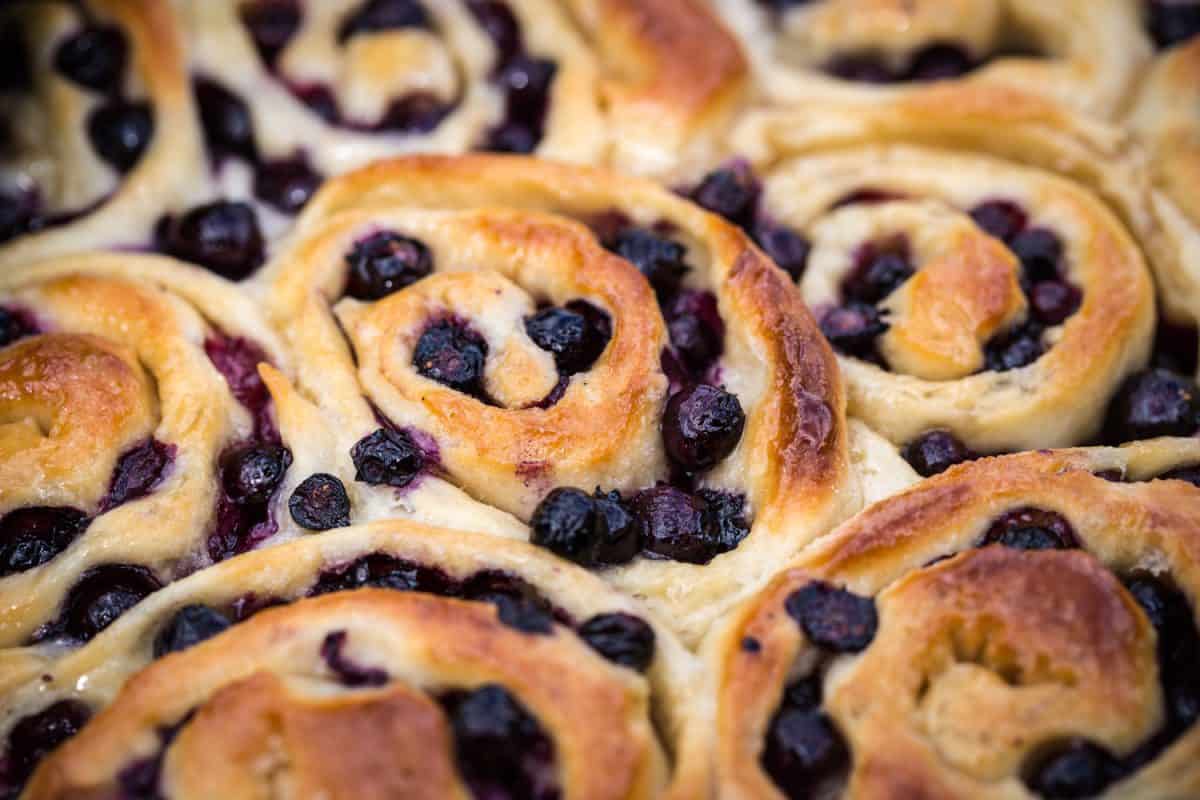 Chocolate is another addition to cinnamon rolls that can spice it up. That can be in the form of chocolate chips, Nutella, and also white chocolate. Also, to literally spice them up, you can add extra spices outside of the normal ingredients. You can add spices like ginger, nutmeg, and cardamom. If you are making your own cinnamon rolls, read our article on baking sheet alternatives to keep them from sticking to the pan.

To sum it all up, cinnamon rolls are a sweet breakfast treat that can be enjoyed with a range of different foods. The key to building a breakfast around a cinnamon roll is having flavors around it that are very different. In the act of creating flavor balance, you can also create a nutritional balance. Elements of protein and other vitamins can be added through fruits, meats, and eggs. There aren't too many rules to breakfast, but you want to make sure you are eating things that fuel you until your next meal.

Can You Make A Milkshake Without Ice?

How To Make Beef Jerky In Convection Oven [7 Easy-To-Follow Steps!]

Can You Make Hamburger Helper Without A Lid?