Onion soups have been a comfort food for over a millennia, with French onion undoubtedly being the most popular. Have you decided to try your hand at making a homemade French onion soup? Are you wondering what type of cheese this soup is traditionally topped with?

Don't be intimidated by the fancy name. Gruyére is a wonderful cheese that you shouldn't be afraid to use! Continue reading, and we'll help you out with a few other recipes you can use any leftover Gruyére on. If Gruyére is hard to find in your area, we have some helpful recommendations for other cheeses that can also work in your French onion soup. 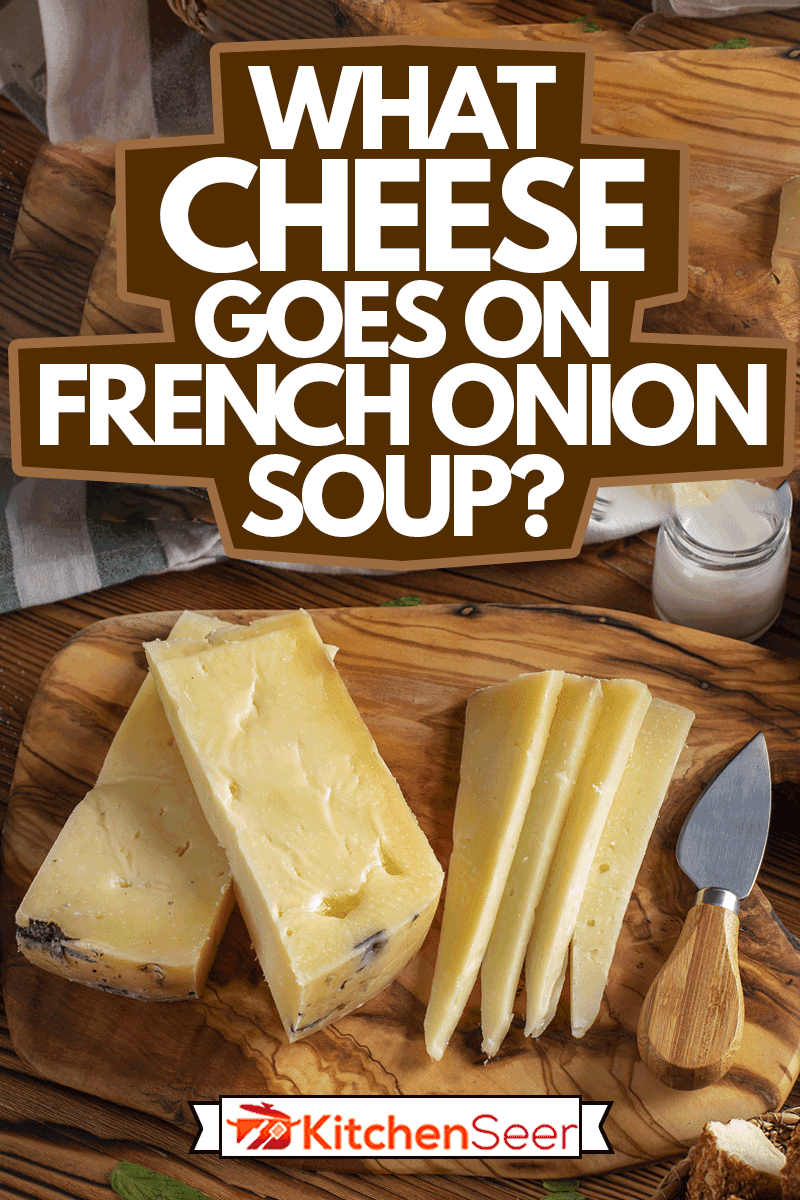 For hundreds of years, onion soups have been a staple in many different cultures, from Japanese clear onion to English creamy onion soup. The most famous of the onion soups, the French onion, is thought to have originated in Paris in the 18th century. However, it's impossible to know the true origins of this popular soup.

French onion soup is commonly considered a comfort food dish. It is said the French served it at weddings as a hangover cure. The classic French onion recipe calls for onion, butter, wine, beef broth, croutons or baguette slices, and Gruyére cheese. It pairs well with a red wine due to the beefiness of the soup.

Why Gruyére if you can? 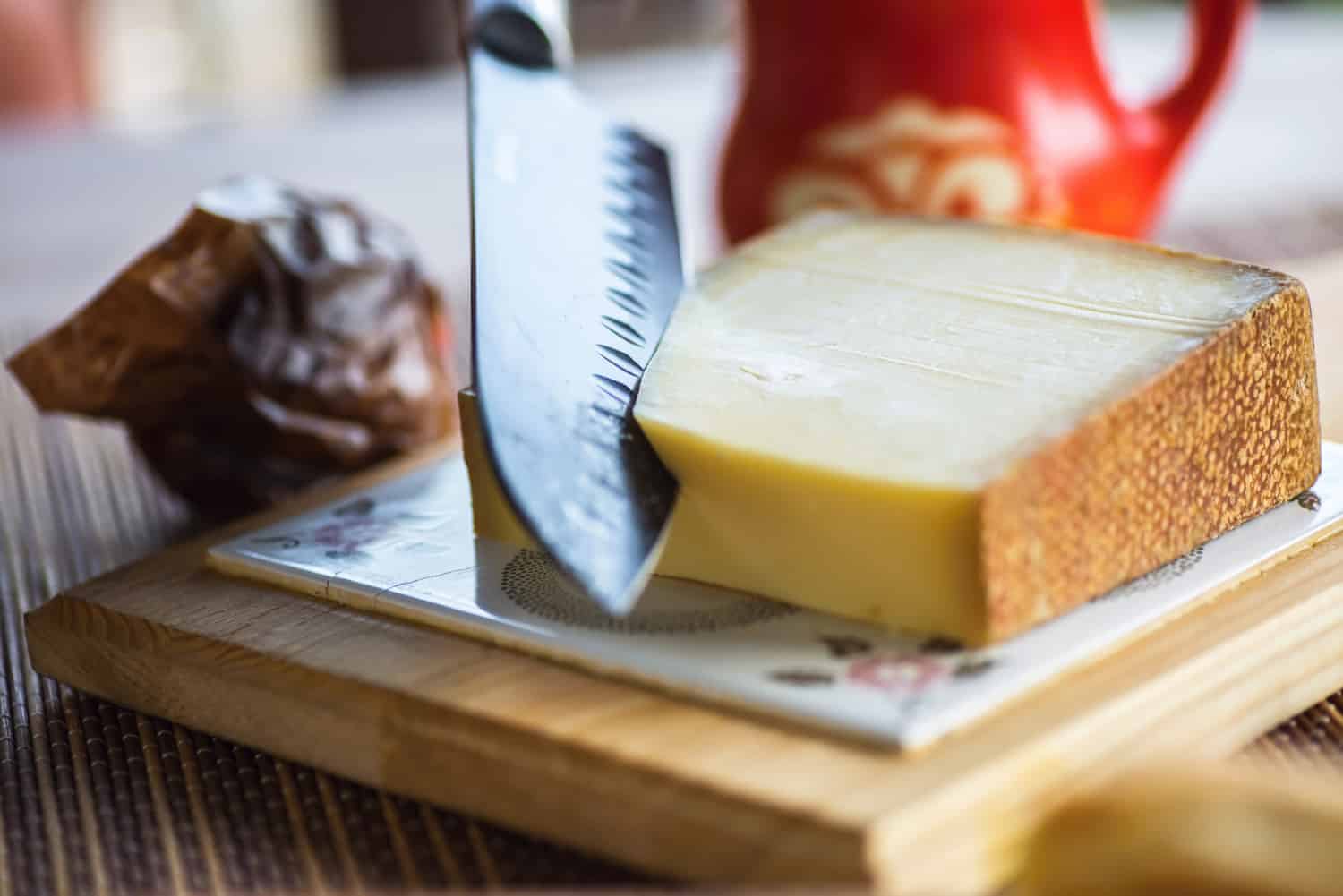 Gruyére (pronounced Groo-Yehr) is a semi-hard, yellow Swiss cheese named after its founding town of Gruyéres, Switzerland. Unlike traditional Swiss, it has very few, if any at all eye holes.

Eye holes are formed by gas bubbles released by the bacteria used in the making of the cheese. If it does have eye holes, they will be very small compared to traditional Swiss or baby Swiss.

Gruyére's flavor profile will depend on its age. Young Gruyére will have a creamy, nutty, salty flavor, while older Gruyére will produce a more earthy flavor profile. Most Gruyére has a typical age time of five to twelve months. It is typically found in the deli section of most supermarkets.

Gruyére is known for its wonderful flavor profile, and it melts easily, yet it is not the star of the show, making it a perfect cheese for baking. It doesn't drown out the wonderful carmelized onion flavor in French onion soup; instead, it gives a little bit of creaminess and gooey melted goodness on top. 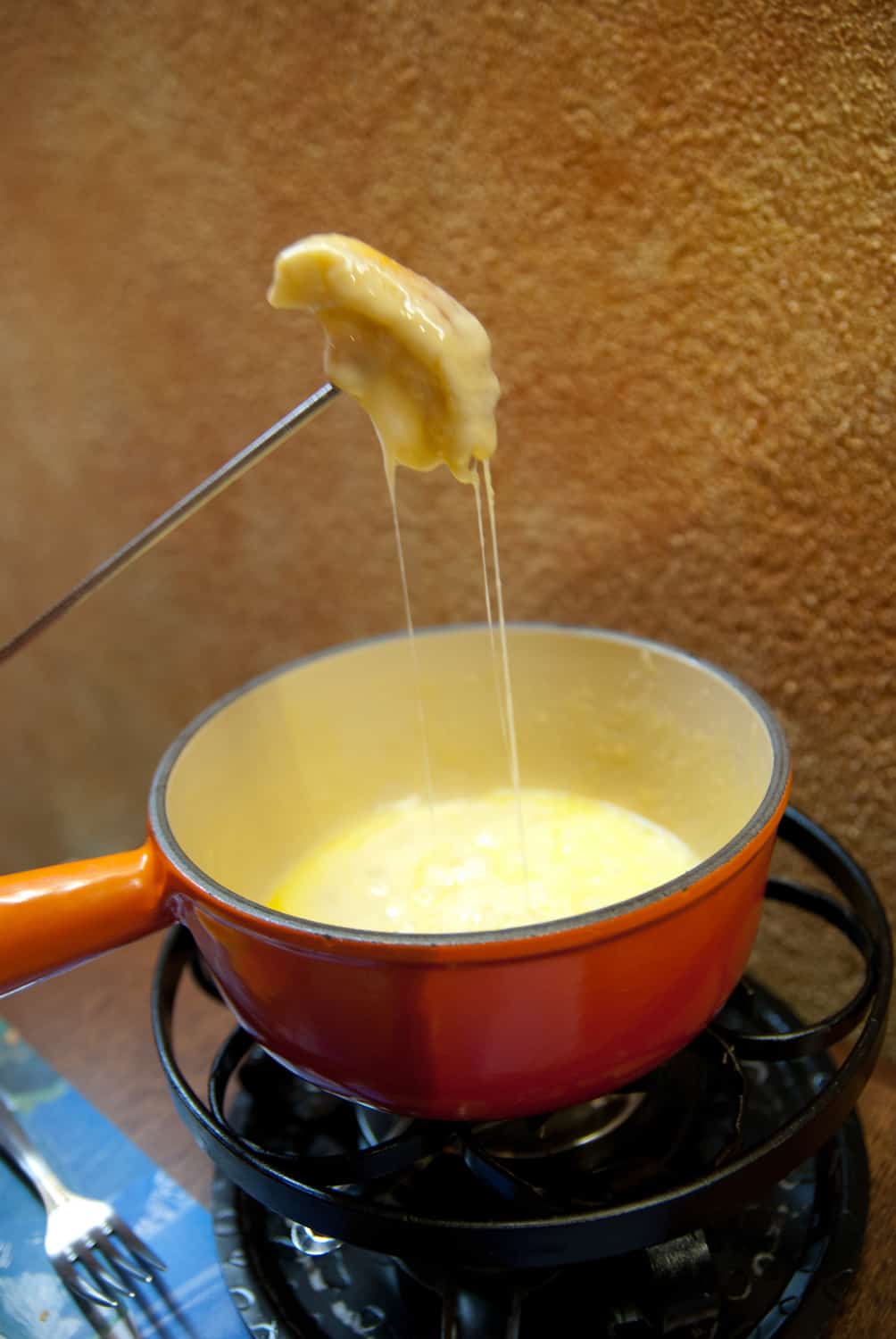 If you've got Gruyére leftover from your soup, fear not! This mild cheese can be mixed with mozzarella for a great flavor enhancement on your next pizza dish! It pairs well with both white and red pizza sauces and produces an even melt without blistering on the pizza.

It can also add a new flavor profile to your next mac and cheese dish or be used with fondue. You can jazz up your next batch of mashed potatoes by using Gruyére, bacon, and sweet onions on top or in the mix! It can also be added to the other cheeses in your favorite quiche dish, and there is a recipe for a great creamy Gruyére spaghetti. 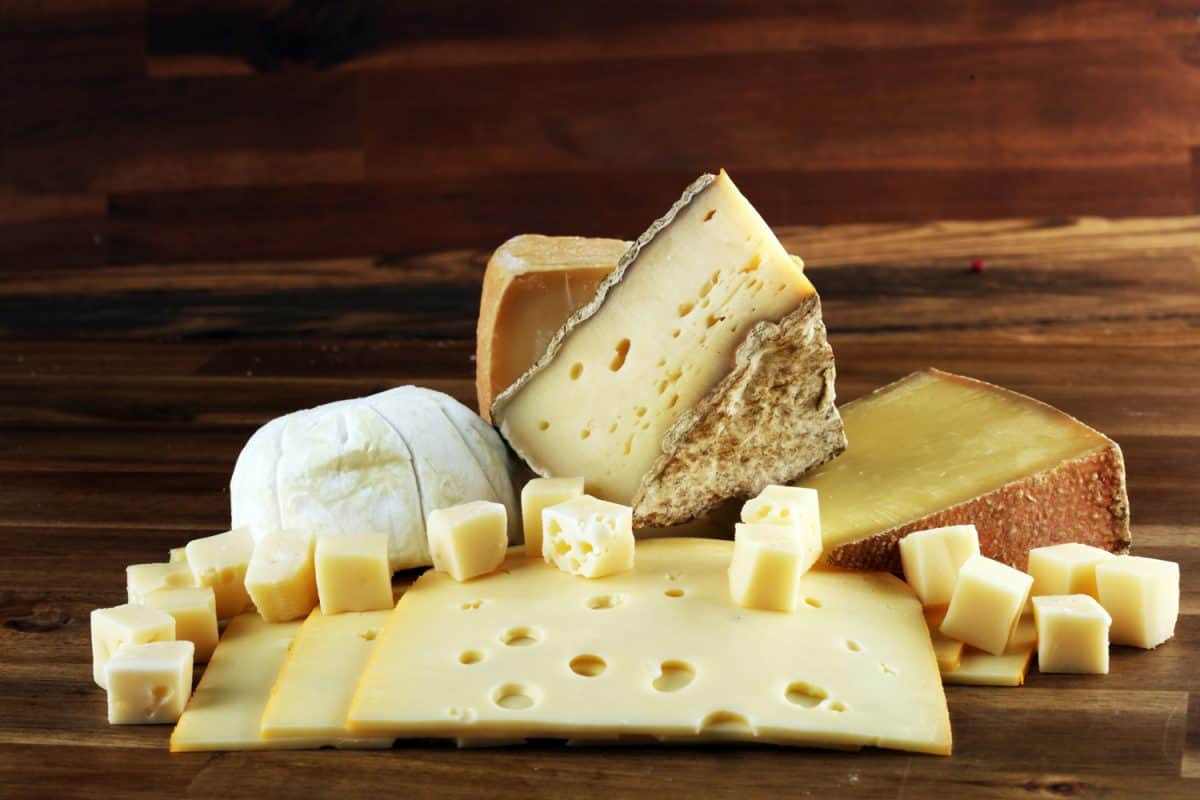 To substitute Gruyére, you will want to choose another semi-hard, yellow swiss cheese for best results in a classic recipe to mimic the intended taste as best as you can. Jarlsberg, Raelette, or Beaufort will all work well if you can't get ahold of Gruyére.

If Jarlsberg, Raelette, or Beaufort are unavailable, the next best options would be mozzarella, gouda, or, lastly, parmesan. If none of those can be used, you can opt for Provolone.

Check out these French onion soup crocks on Amazon

Choosing your onion for French onion 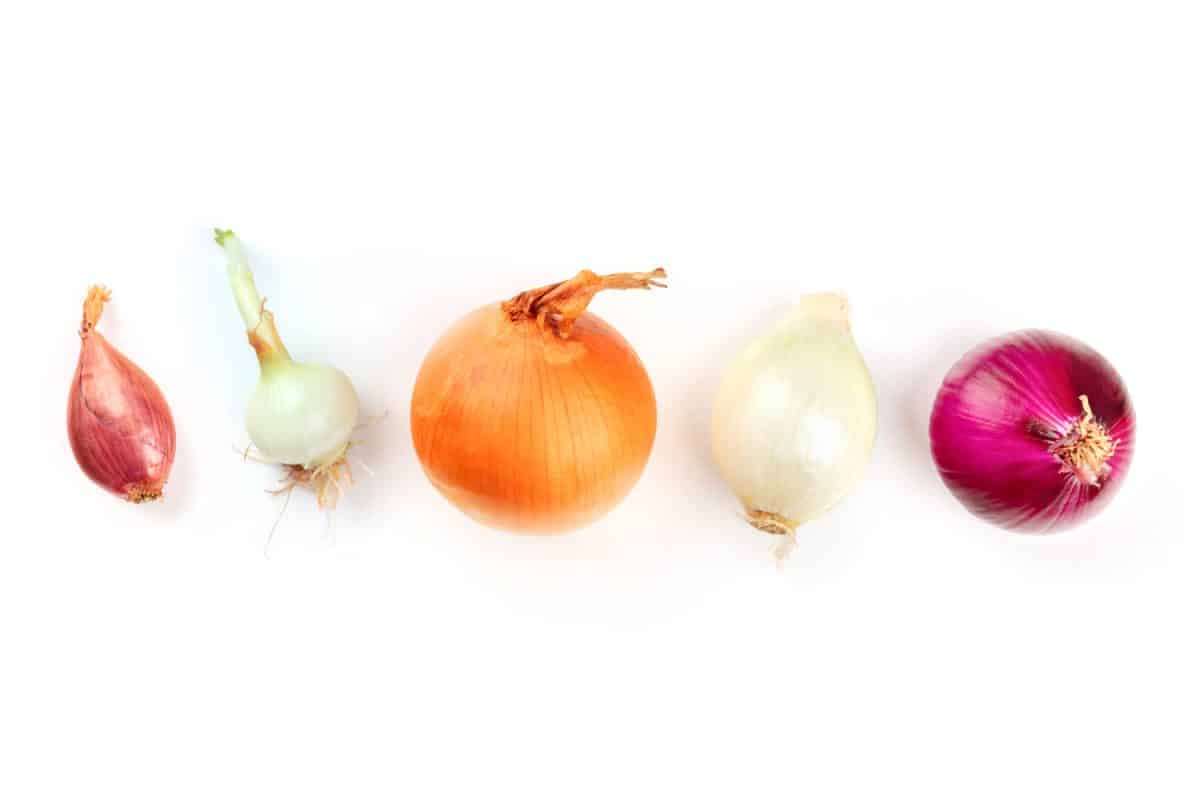 You can use any onion for French onion soup. However, the onion you choose will slightly change the flavor profile of your soup. Most classic recipes call for a sweet onion, resulting in a mellow and sweet flavor in the soup. Other onion variants are described below.

You can feel free to mix it up and use a variety of onions in your soup as well. Many cooks think this results in the best flavor profile.

How do you keep the cheese from sinking to the bottom? 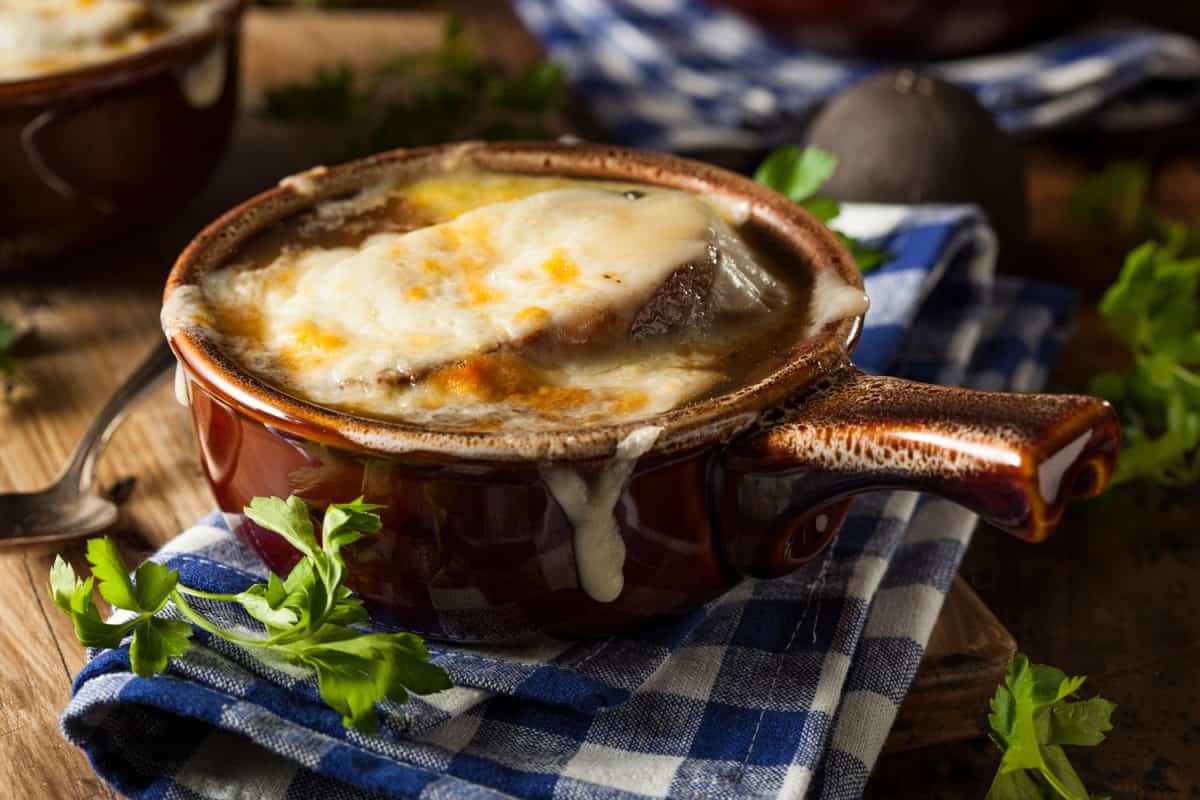 If you finely grate your Gruyére cheese on top, you should have an even melted cheese and no issues with sinking! Finely grated cheese is the key to proper melting and preventing any fall-through in your soup. The bread topped on the soup before baking also helps in regard to preventing cheese fall through if using a substitute.

Here is a helpful video on how to add the Gruyére cheese before baking. 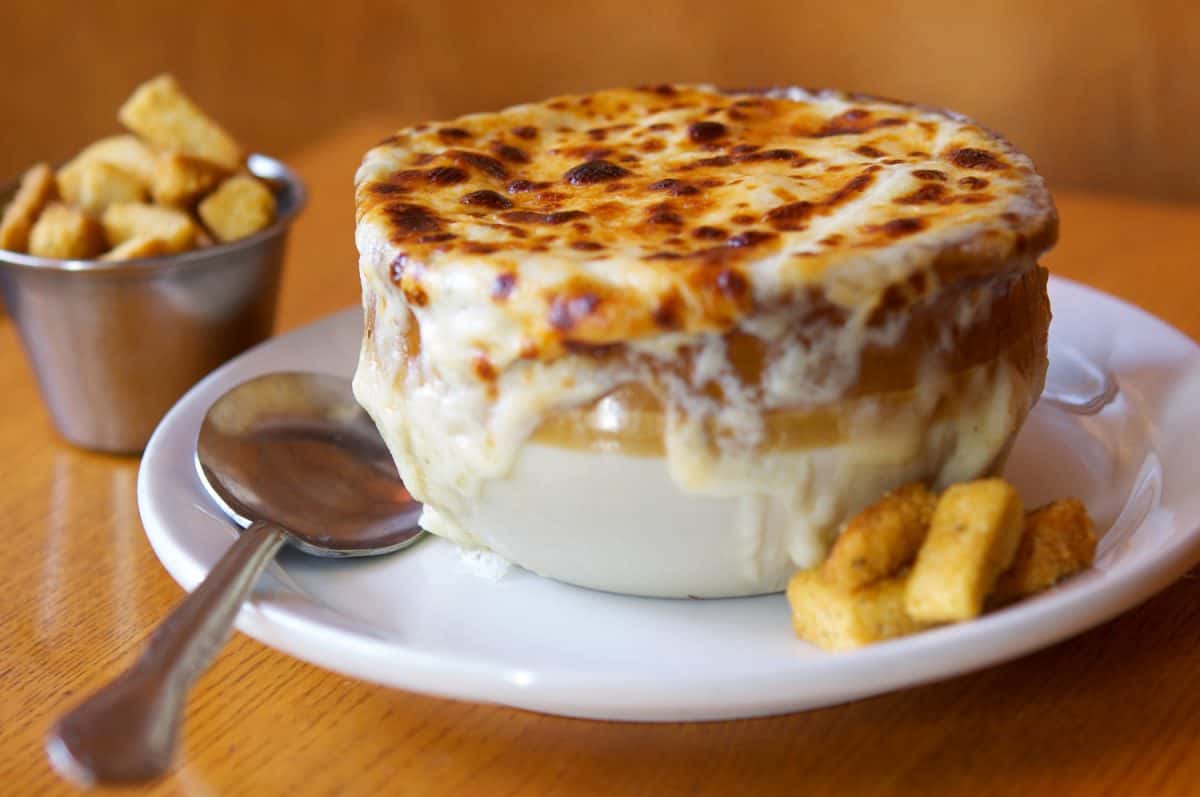 If you must substitute Gruyére, your best option for similar taste is another Swiss. If that can't be done, the best commonly found cheese will be mozzarella, gouda, parmesan, or Provolone. However, all attempts should be made to use Gruyére for the classic French onion soup recipe!

Or alternately, you can opt for a Vegan recipe sans cheese! If you're looking for a healthier option, then picking Provolone or mozzarella is your best bet to cut back the fat and caloric intake of the classic recipe.

French onion soup is more indulgent than its broth-based counterparts. This is thanks to the bread and cheese topper, adding in extra calories, fat content, and carbs to the dish.

In a classic recipe bowl of French onion soup, you can expect:

The cheese topping is definitely the most unhealthy part of the soup. Though Gruyére has a wonderful taste, it is not the most healthy of cheeses. One ounce of Gruyére (equivalent to one slice) equates to 117 calories and 9 grams of fat. With that fat content, you are indulging in 10% of your daily recommended fat intake.

To compare, Provolone has 98 calories and 7 grams of fat in the same serving size. The least caloric and fattening option will be Mozzarella with 4.8 grams of fat and 78 calories per ounce of cheese.

Onions hold many health benefits from aiding in digestion, reducing glucose, and providing cardiovascular advantages. They are also nutrient-dense vegetables containing vitamins C, B, and potassium.

You can make an even healthier option by substituting half of the beef stock with chicken broth and opting for provolone cheese instead, or going with no cheese at all and a Vegan recipe. 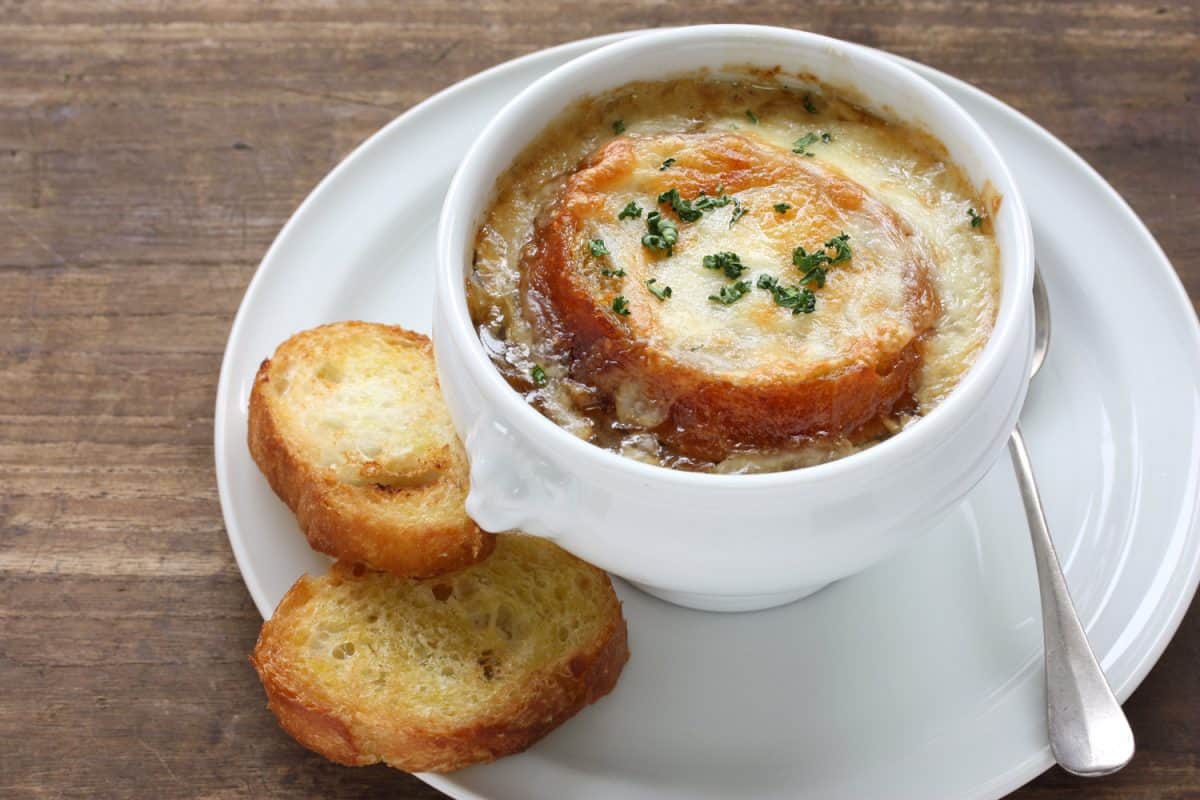 The classic French onion soup recipe always includes Gruyére cheese. However, you can modify your own recipe to include or omit the cheese. There are many vegan recipes online that are sans cheese.

For the classic indulgent and decadent French onion soup, you will want to find some Gruyére in your supermarket's specialty cheese section. However, can you use a substitute or make the dish without cheese altogether? Absolutely! The beauty of cooking is that you can modify and enhance the recipe however you deem fit!

If you've enjoyed this article, please consider these for further reading:

How To Caramelize Onions In The Oven

Should Butter Leak Out Of Croissants?

Are Potatoes Bad If They Are Soft Or Green?