There's nothing better than a warm, gooey cinnamon roll on a Sunday morning. It's the soft center of this breakfast treat that sets the mood for a good day. On the other hand, there may be nothing worse than expecting a moist pastry and biting into a dry roll instead. Whether baked from scratch or popped out of a Pillsbury™ can, cinnamon rolls tend to go stale. That's why we've done a little bit of research to find out how to keep rolls soft for days.

The number one way to keep cinnamon rolls moist is proper storage. To avoid dry rolls, keep them airtight. If, for some reason, they do go stale, storing them with a slice of apple or soft bread can sometimes bring back moisture. Otherwise, you can microwave them one at a time with a cup of water to soften them up.

From mixing to storing, this guide will teach you the best ways to ensure your rolls have that classic texture we all know and love. 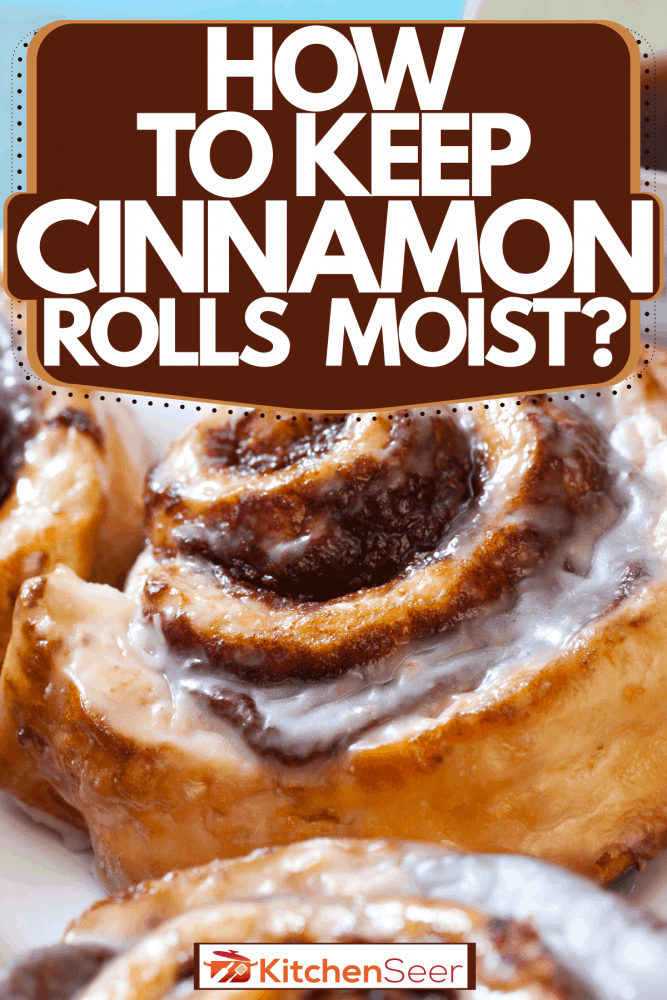 How do you keep cinnamon rolls soft overnight?

While everyone appreciates a cinnamon roll with their coffee, few actually want to bake them first thing in the morning. But you don't have to drive to the nearest Shipley's with your bathrobe on to avoid early morning baking. Instead, bake them the night before so you can wake up to a homemade roll waiting on your counter. 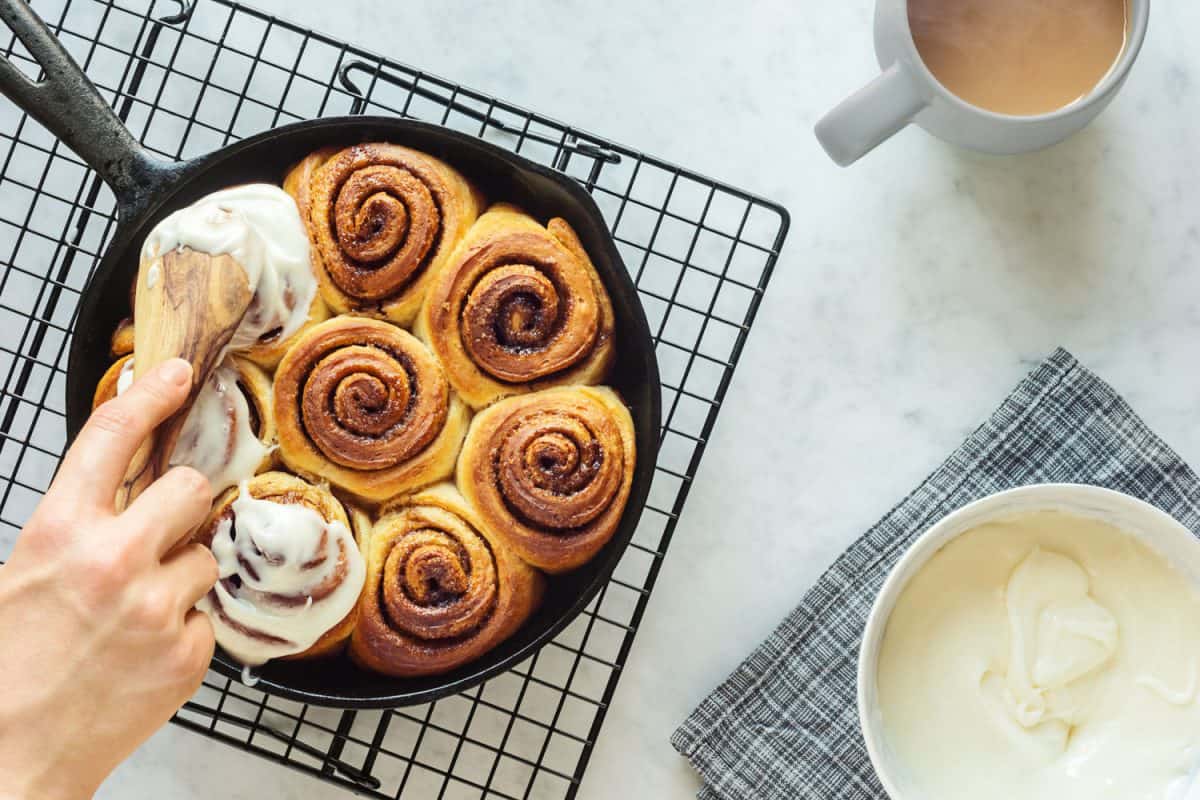 To make sure that the rolls maintain their moistness that night and every night after, tightly wrap them individually in foil or cling wrap or double wrap the entire pan. This will keep air from drying them out. Then you'll have a perfect breakfast already prepared for the morning. Be sure to always rewrap your cinnamon rolls after plucking one out so that they stay soft down to the last roll.

How do you moisten dry cinnamon rolls?

We all know the feeling. You wake up excited to start your morning with the doughy, sugary, cinnamon-filled roll only to find someone else beat you to it and left the rest uncovered and dry. Before you throw away the pan and settle for a boring piece of toast, here are a few methods to try to resuscitate your rolls.

The first and easiest way to bring moisture back to cinnamon rolls is with the microwave. Don't just pop them in for a minute, though. For this method to be effective, you should first microwave a cup of water until steaming. Meanwhile, butter the roll you want on all dry or bready areas. Then, with the water still in the microwave, heat the roll in 30-second intervals until warm and soft.

Another more time-consuming way to soften your cinnamon rolls is by adding a slice of bread or apple to the storage container. This may seem strange, but it is actually a common method to keep other baked goods, such as cookies, from becoming stale. Basically, the rolls will absorb the moisture from the bread or apple. After a couple of hours, you should have soft rolls. Just be careful not to put more than one slice, or you'll end up with mushy rolls.

Do cinnamon rolls with icing need to be refrigerated? 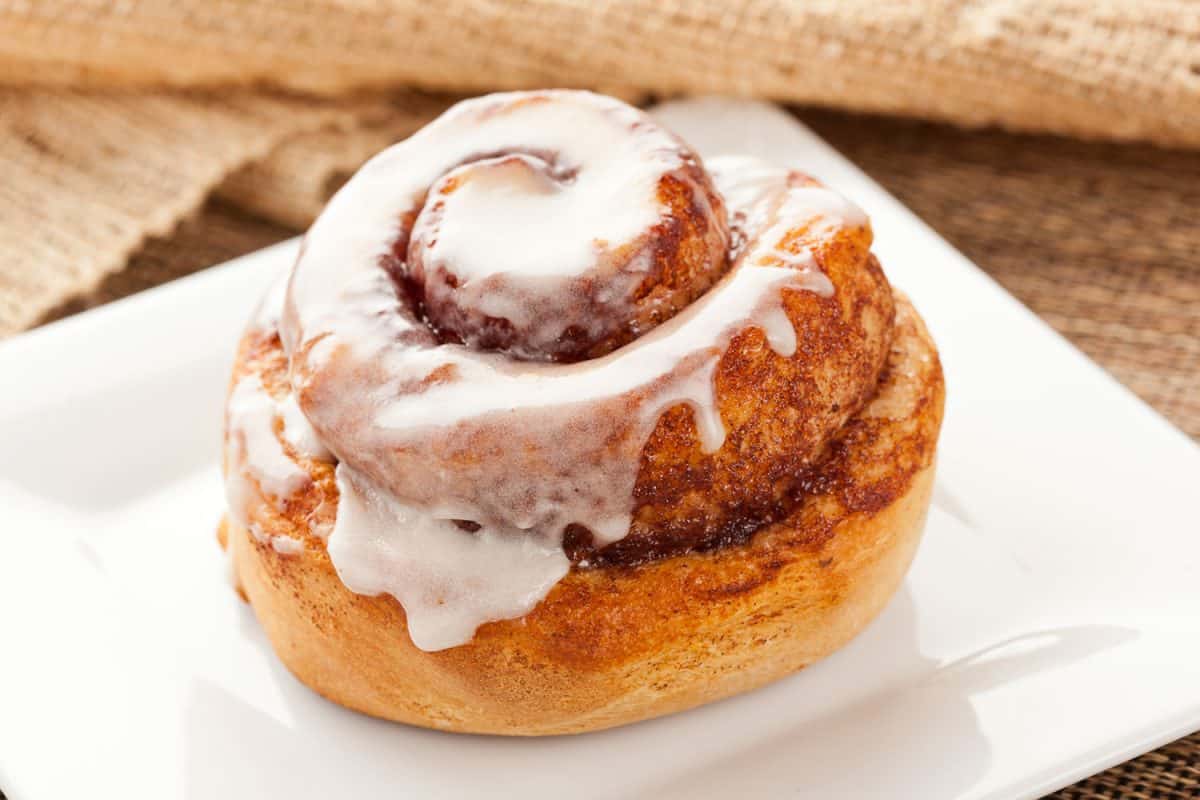 It's best to keep cinnamon rolls at room temperature, iced or not. If kept in the fridge, they may last longer, but the cold and dry air may harden the rolls. On the counter, rolls stay good for two to three days (if they're not all gone by then) and can retain their softness.

The icing is really the part that people worry about sitting out. However, the large amount of sugar in cream cheese icing acts as a preservative and keeps it from spoiling. In addition, if the rolls are wrapped as tightly as they should be, it is unlikely for bacteria to be an issue.

What can you do during baking to ensure moistness?

As important as storage is, it's not the only way to guarantee soft cinnamon rolls. Before your breakfast bake has even gotten the chance to sit out, there are things that can help make sure it is perfectly gooey.

Many times, the hardness of a bake can be traced all the way back to the beginning stages. The consistency of the dough is key to a good outcome, and cinnamon rolls are no exception.

While some doughs are meant to be stiffer or crumblier, others like cinnamon roll dough is meant to be a little tacky. When dough is tacky, it is a little bouncy and sticky. It makes sense that for a soft, moist roll, you'd need a soft, moist dough, right? If there's too much flour in the dough, the rolls will be dry and hard.

You will know that your dough is moist enough when it is a little sticky, but it pulls away from the sides of the mixing bowl and doesn't make a mess when kneaded. To learn more about how flour affects dough, read our article comparing bread flour and all-purpose flour.

How much should you knead the dough?

Another common mistake when making any kind of dough is overworking. When the dough is kneaded, it produces gluten. Too much gluten makes for a tough, bready dough that is not ideal for cinnamon rolls. Unlike with bread, which you usually knead by hand after using the mixer, cinnamon roll dough should only be kneaded in the mixer until it is mixed and pulls away from the bowl. No hand kneading is necessary.

Overworking can also happen when rolling out the dough after the first rise. Make sure not to roll more than is necessary to achieve a flat, semi-rectangular shape. Try to avoid restarting the rolling process, or you may end up with tough dough.

Pouring a liquid onto your uncooked rolls may seem strange, but it's actually a very traditional way to guarantee moistness. In fact, many bakers swear this trick makes them feel just like Cinnabon® rolls. Not only does the cream seep into the dough, but it also makes the cinnamon sugar filling gooier and less grainy.

After your cinnamon rolls have finished their final rise, warm some heavy cream in a bowl (if you don't have heavy cream, then you can use coffee creamer, half and half, or whole milk in its place). Then, right before your cinnamon rolls go in the oven, pour the warm cream over the top. It's important that the cream is warm. If it is too cold or hot, it may affect the rise of the rolls.

Don't have a casserole dish to make your cinnamon rolls in? Check out our article, What Can I Use Instead Of A Casserole Dish?

Do you ice cinnamon rolls while they're hot? 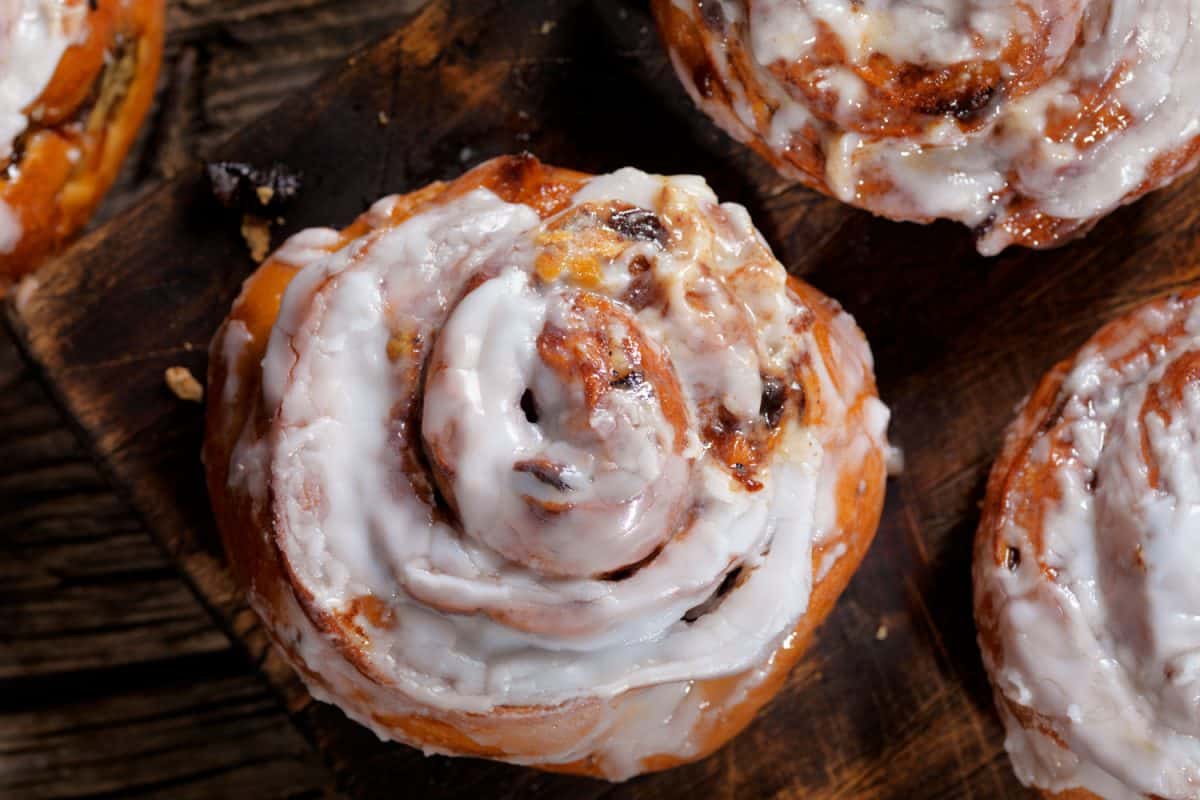 One method of creating moistness in cinnamon rolls is the double frosting method. This is when you begin to ice your rolls while still hot. We say begin because you should only use enough to cover the hot rolls, which should be about a quarter of your icing. This allows for some of the icing to melt down into your rolls and give them that gooey center. After they have cooled some, you can top them off with what is left of the icing.

Whether scratch-made or canned, there's a lot to achieving that perfectly soft cinnamon roll. And while we may have made it sound complicated, the most important thing to know is to keep those rolls sealed tight! As long as you can do that, you're sure to have cinnamon roles that stay gooey and moist for as long as you and your family can make them last.

How Much Ranch Seasoning Is In A Packet?

Can You Use Sunflower Oil Instead Of Vegetable Oil?

For How Long Should You Cook Spaghetti?