Baking pastries is not an easy task initially. It takes many tries before you manage to make consistently good batches. One element you have to play around with is temperature. So, what's a good temperature to bake cinnamon rolls? If that's your concern, let's go over the details below.

Generally, the temperature range to bake cinnamon rolls is around 325-375 degrees Fahrenheit. The bakeware you use can also influence the result. So, you might have to make adjustments depending on the material of the baking sheet.

Whether it's your first batch or attempting to perfect your technique, getting the temperature right is the first step toward success. After all, it influences if the cinnamon rolls will be undercooked or overcooked. Other factors come into play. If you'd like to learn more, keep reading. 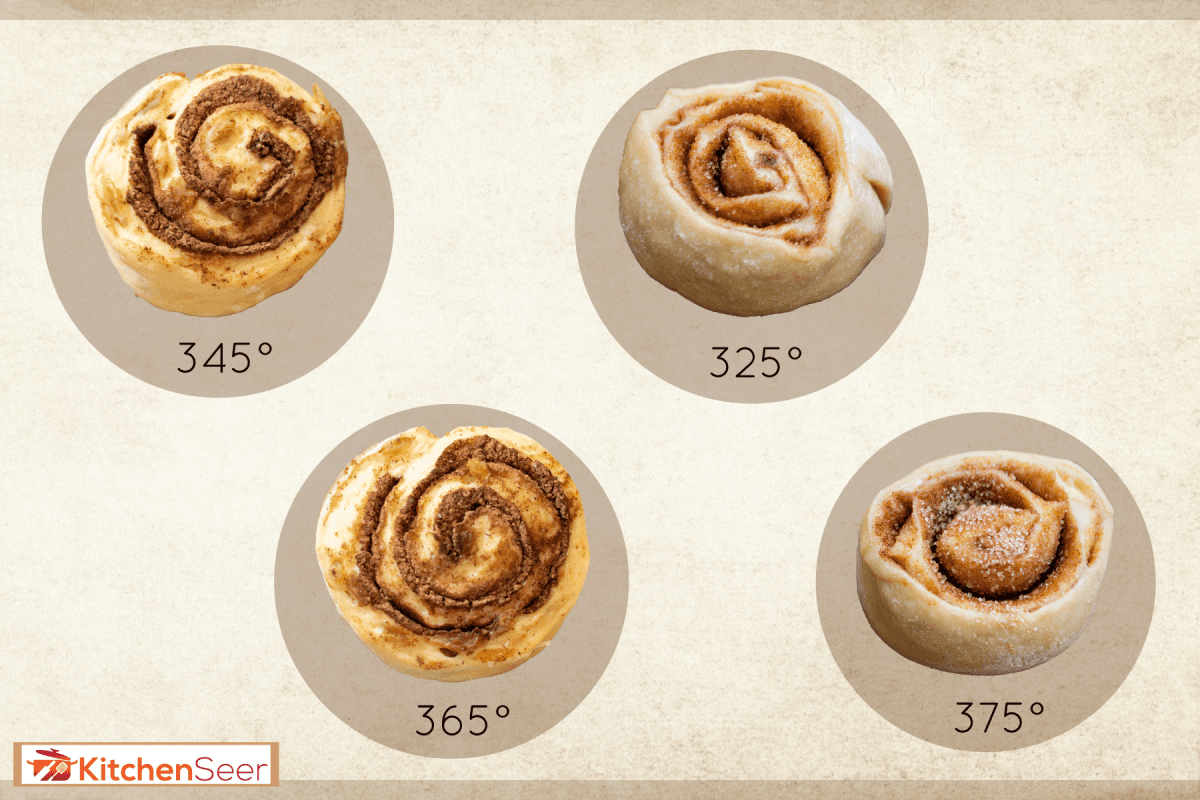 It's no surprise that the first few batches of cinnamon rolls you bake end up below your expectations. Maybe you're using a recipe you found online. Otherwise, you're simply following instructions from a friend or family member. 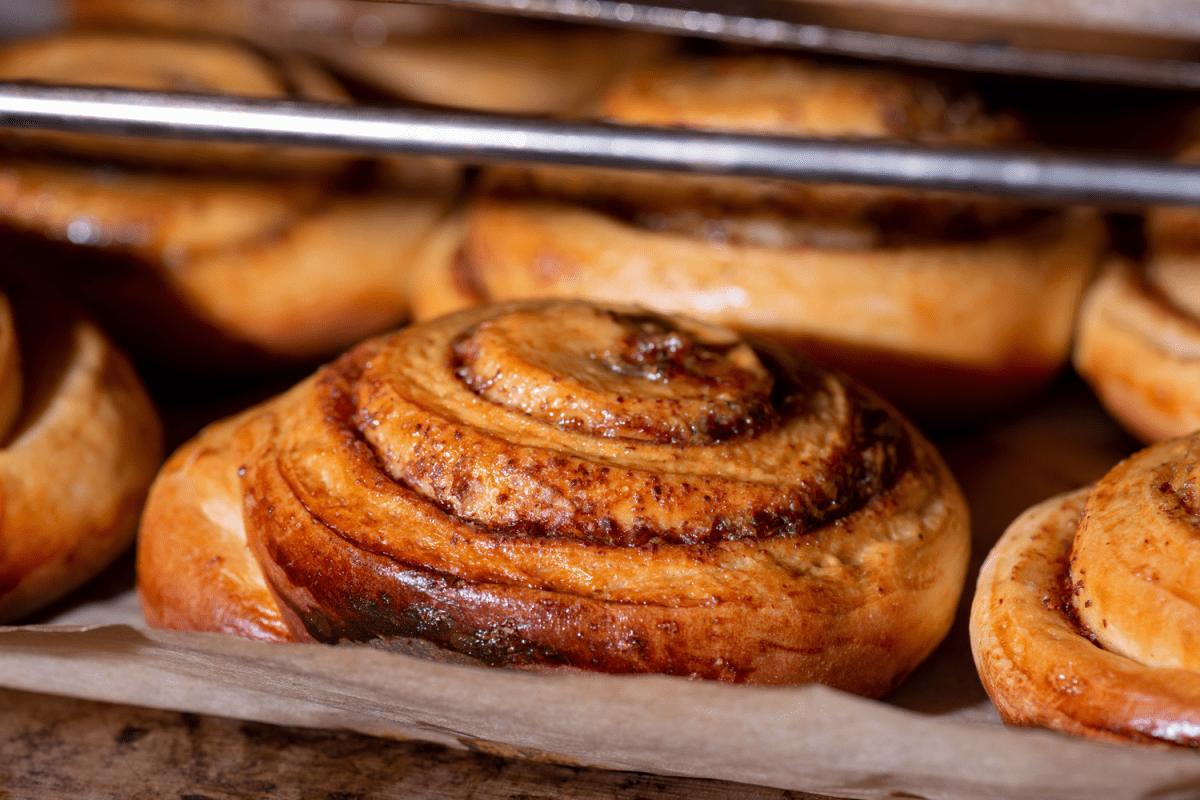 The problem with recipes is that you don't get all the information you need. Little details are missing that can affect the outcome. Let's start by addressing the standard temperature ranges for baking cinnamon rolls.

Most bakers use a temperature range of 325-375 degrees Fahrenheit. You can use the lower end if you find that your cinnamon rolls are dried out and overcooked.

However, an oven at 350 degrees Fahrenheit seems to be the sweet spot.

How Long Should You Bake Cinnamon Rolls?

Using the correct temperature isn't enough. There's still another factor to consider: time. It's crucial that you don't forget the baking time for the recipe. That's not to mention that you will also need patience.

Sometimes it can be a bit tricky to wait the entire time. So, you might hesitate and do something that would alter the outcome. Maybe you open the oven door to check how it's doing.

That could be a mistake because you're letting heat escape the oven. Regardless, the general baking timeframe depends on the oven temperature. The lower the temperature, the more you'll have to wait.

You can bake cinnamon rolls at 350 degrees Fahrenheit for 20-25 minutes. At 375 degrees, leave the cinnamon rolls inside for 15-20 minutes. Even then, you might want to break the rules in some cases.

Doing What Works Best For You

There are times when you will want to imitate a specific product. Maybe your inspiration behind baking cinnamon rolls is Cinnabon. And, as you already know, they're typically soft.

Some would describe the interior as gooey. Many love that part for a good reason; it tastes like no other. Nevertheless, how do you replicate that at home?

It turns out that you will have to undercook it slightly. In other words, take the baking time and subtract one to three minutes. This way, you get that Cinnabon goodness you're craving.

You will cook the cinnamon throughout at an internal temperature of 190 degrees.

What Are The Problems You Will Run Into Baking Cinnamon Rolls? 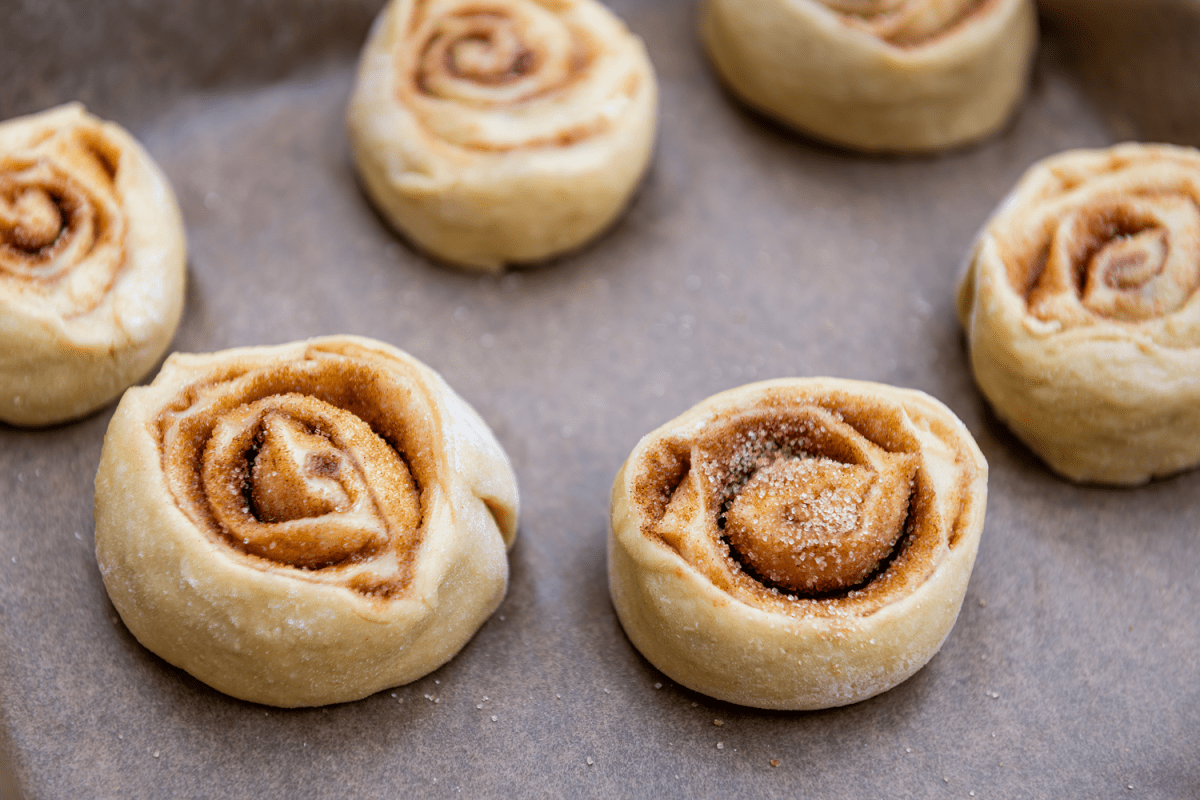 Putting information into practice isn't always easy. Sometimes we run into situations that guides don't account for. One issue that comes to mind is sides that brown too early.

The top or the bottom can brown way before the cinnamon roll is ready to take out. When this happens, the top or bottom becomes dried out. Of course, you'll have to adapt to the situation.

There are two ways you can avoid making a bad batch. Though, it will depend on which side browns early. If the top is ready too soon, you can limit the browning by tenting the pan with aluminum foil.

In addition, you'll have to lower the temperature by 25-50 degrees Fahrenheit. Bake for 15-20 additional minutes since you're reducing the temperature.

If you're having a problem with the bottom browning too quickly, you can change the baking sheet. Some suggest using an insulated baking sheet instead. Otherwise, you need to limit the radiant heat transfer.

You can do that by putting the main baking sheet one rack higher. Then, place an empty one underneath. The baking sheet on top won't heat up as quickly.

Does The Bakeware You Use For Cinnamon Rolls Matter? 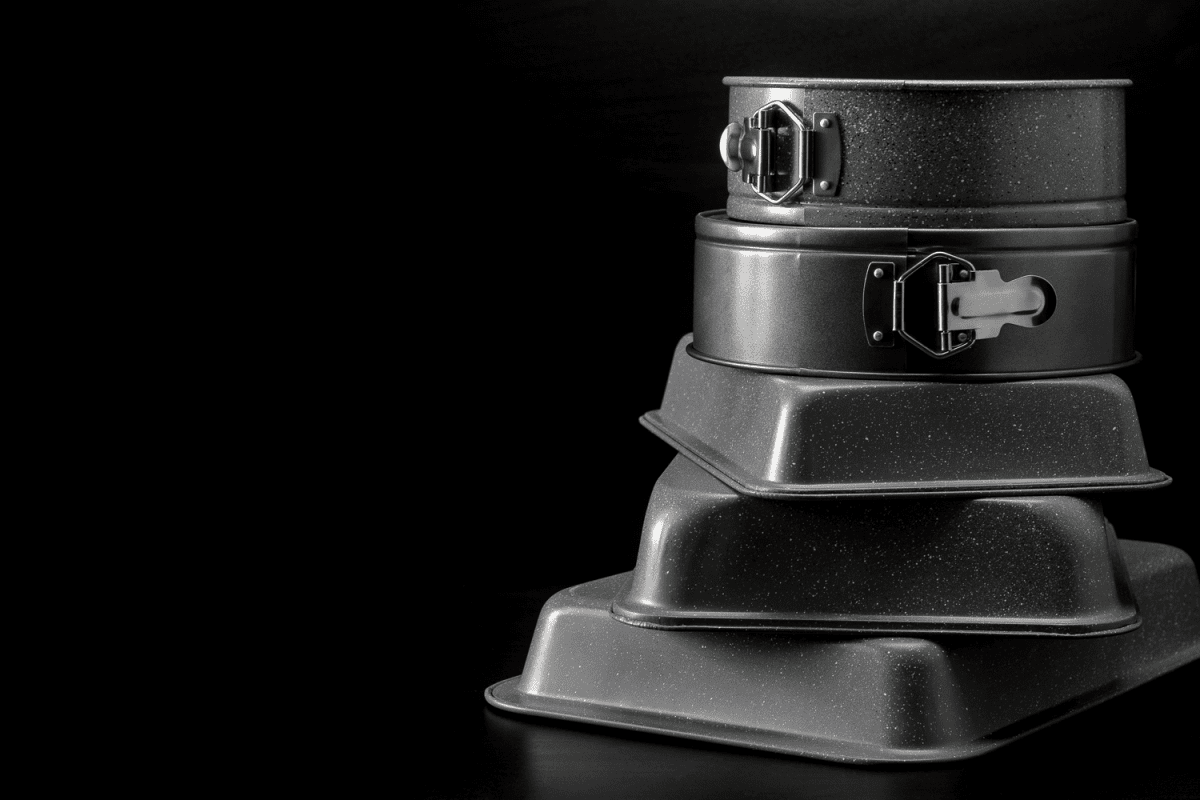 Another detail that some recipes don't mention is the material of the baking sheet. It might not seem like it makes a difference, but it does. When applying heat to a baking sheet, it will act differently depending on the material.

Baking sheets are aluminum, stainless steel, ceramic, glass, or silicone. So, it raises the question, how are they different? It mostly has to concern how quickly they can heat up.

The best material to use would be aluminum. It's the type of baking sheet most professionals would use. The reason is simple.

Aluminum is a great heat conductor. In other words, it's good at transferring the heat it absorbs to what you are baking. It's especially the case when you use a quality aluminum baking sheet.

If the baking sheet is cheap, it may deform. Therefore, your pastries will come out unevenly cooked. Cinnamon rolls have a problem with sticking to the metal.

You can line the sheet with parchment paper to avoid this.

Glass bakeware has a foot in the baking community because you can see what's happening. If the bottom is browning too quickly, you'll know by looking through the glass. It helps you catch problems before they happen.

However, using glass comes with its problems. It's slower to heat up. Therefore, it will take longer to bake. It's up to you if the benefits outweigh the waiting.

Ceramic pans perform about the same as glass bakeware. The only difference is you can't see the bottom.

A cast iron is another decent option you should consider. It's a decent conductor of heat. But, it retains heat better. Sure, it's going to take longer to heat up.

Once it's there, it can provide an even and steady heat source. It's one of the reasons bakers don't mind using them for pastries.

If you want to make sure one side doesn't cook faster than the other, give cast-iron a try.

How Do I Know When My Cinnamon Rolls Are Done? 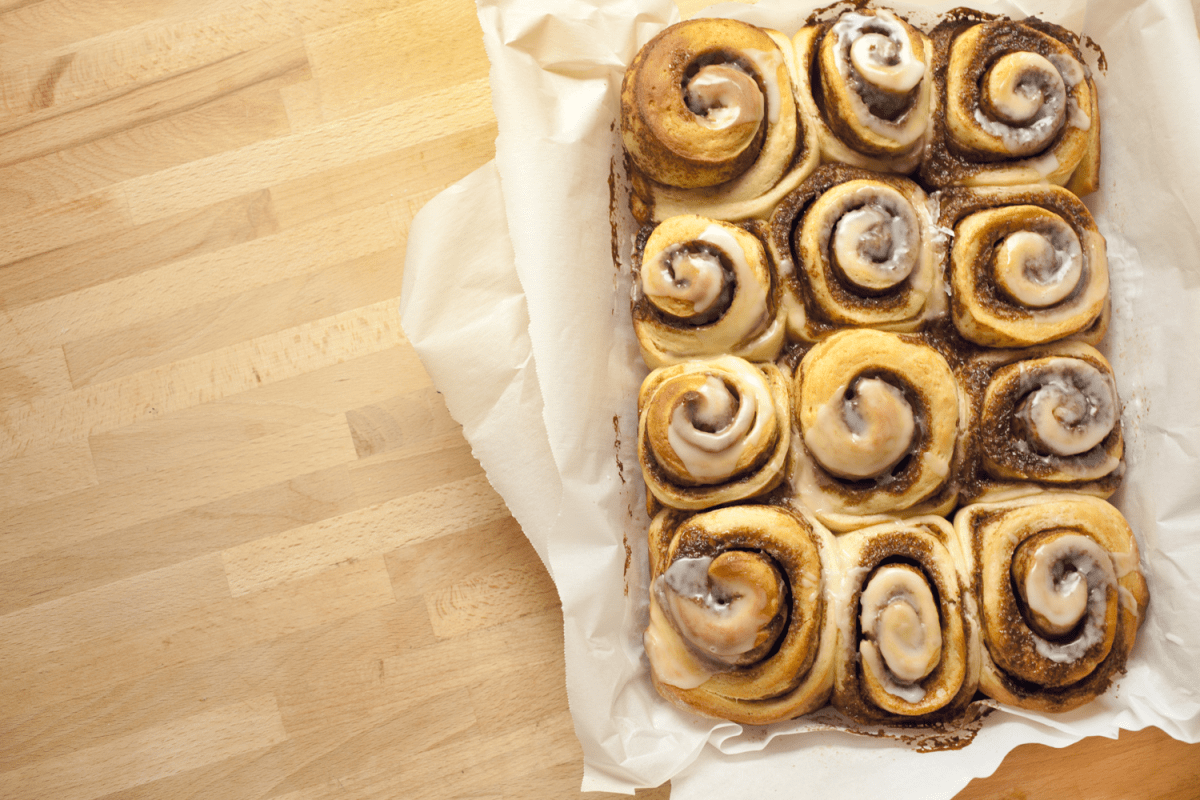 Looks can be deceiving. Once you take the cinnamon rolls out of the oven, you can't be sure they're ready. You can't tell the doneness of the inside from the outside.

There are a few ways to tell when it's ready to consume. Start by checking out the center-most roll. Use a fork or knife to pull it out of the bunch.

Take a look at the dough. If it looks raw and sticky, it needs more time in the oven. One way you can check the interior of the roll is by using a toothpick. Stick the toothpick into the center. Then, take it out.

If the toothpick doesn't come out clean, put the rolls back in the oven. The rolls will look ready when the top is golden to dark brown. The bottom should also be a light golden brown.

The internal temperature will hover around 190-200 degrees Fahrenheit.

Why Didn't My Cinnamon Rolls Rise In The Oven?

Proofing dough is an essential step in making pastries. It's what helps make them light and fluffy. The oven is an area people often recommend for proofing.

However, situations can go wrong. If the dough fails to rise in the oven, the reason might be because of the temperature inside. Yeast thrives in warm temperatures.

But, if it gets too hot, the yeast will die. It begins dying off at 120 degrees Fahrenheit. Temperatures higher than that will kill the yeast completely. Make sure there isn't anything that's making the inside of the oven hotter than usual.

Otherwise, try another spot to see if it keeps happening. If the rise continues to fail, there might be something wrong with the yeast.

Should Cinnamon Rolls Touch When Baking? 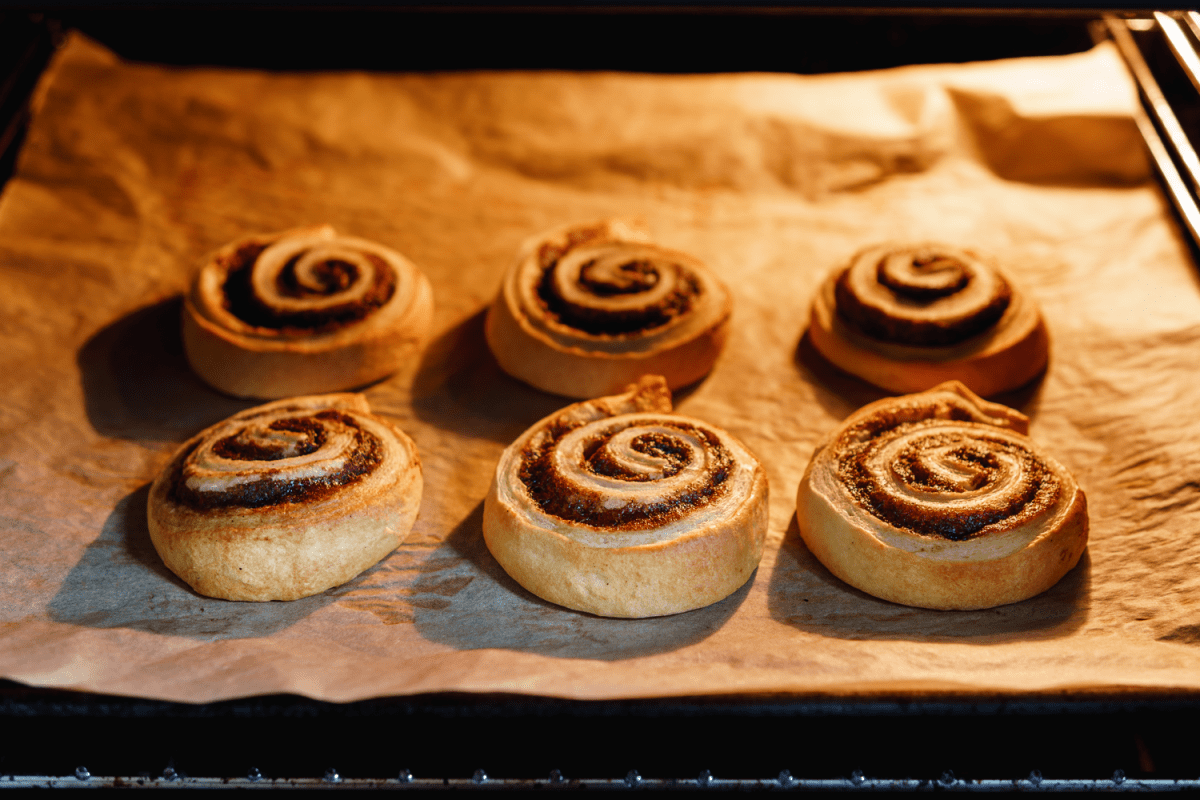 There's almost no way to prevent cinnamon rolls from rubbing up against each other in large batches. If that's concerning to you, it shouldn't be! It can reduce the exposure to heat on the sides.

Once they're ready, you will see that the sides remain nice and soft. It also creates taller rolls. Of course, if that's not what you want, you can space them out evenly.

Spacing the rolls out will help the surface get a harder crust. The rolls will be wider instead of taller too. In any case, it's up to you if you want to leave them touching each other or spaced out.

Just keep in mind that they produce different results. 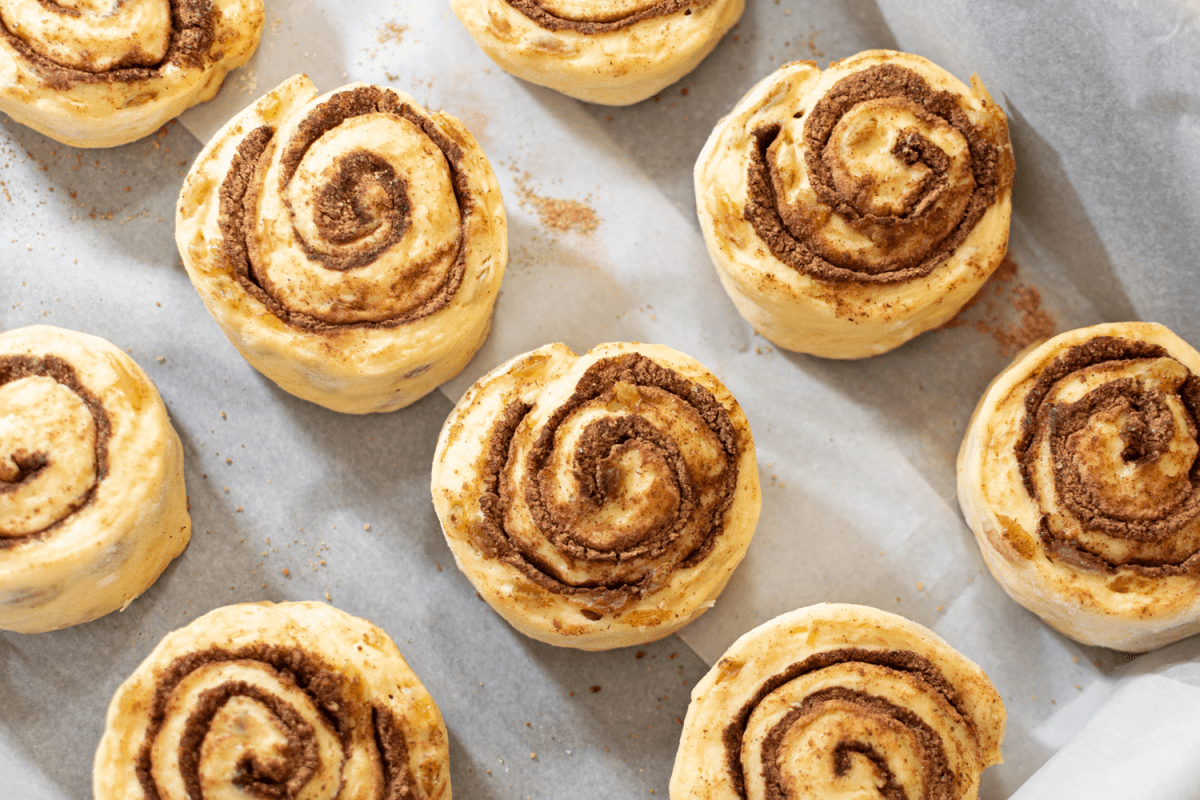 Your batches of cinnamon rolls will get better with time. It's crucial that you experiment with the baking temperature. This way, you can see what works for you and your tools. We hope you found the information above helpful.

Before you go, do you have other cinnamon roll concerns? Do you plan on refrigerating them? To learn more, check out:

Can't eat all of them right away? To find out how long they can last, check out:

Dough Is Too Wet—What To Do?

How Much Does It Cost To Make A Cheese Board?