No matter how much cardiologists caution their patients, countless Americans can’t resist the savory taste of bacon. However, as more people become health-conscious, foodies have been trying to figure out how to make this food a little less fattening (and we’re not talking about subbing with turkey!). One health hack chefs have suggested is to pop your bacon in the microwave. According to some people, this convenient cooking method lowers bacon’s fat and calorie count. But is this tip too good to be true? Please keep reading to discover all the research we’ve done on this tasty topic.

Recent studies suggest microwaved bacon has less fat and calories than traditional pan-fried bacon. A significant reason for this is that your paper towels will absorb all of that greasy bacon fat in the microwave. While this isn’t great news if you like storing bacon drippings, microwaving bacon seems to enhance its nutritional profile.

If you’ve never tried microwaving bacon before, then you may have a few questions about how to do it right. Below, we’ll go over a few pro tips for cooking yummy bacon in the microwave. 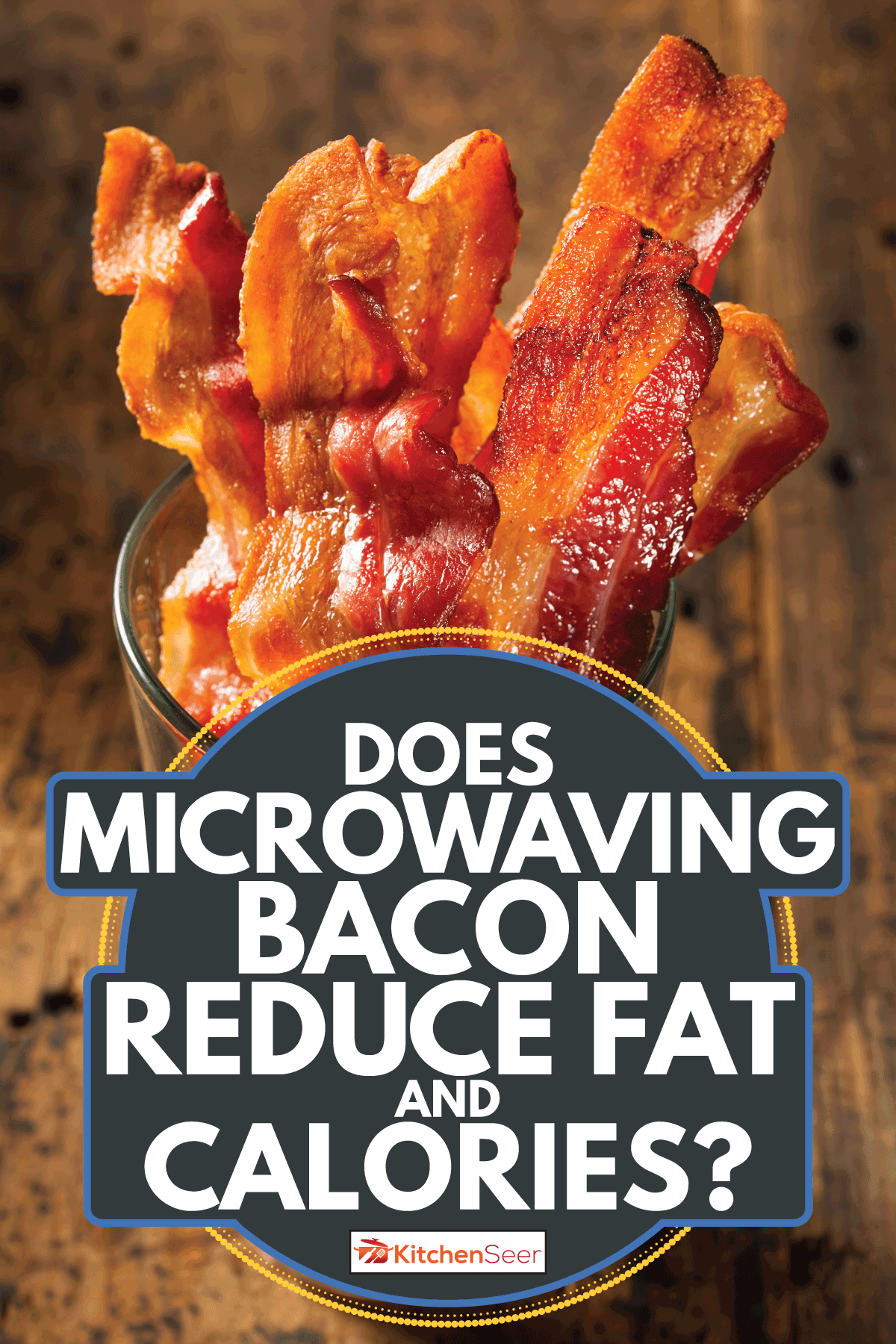 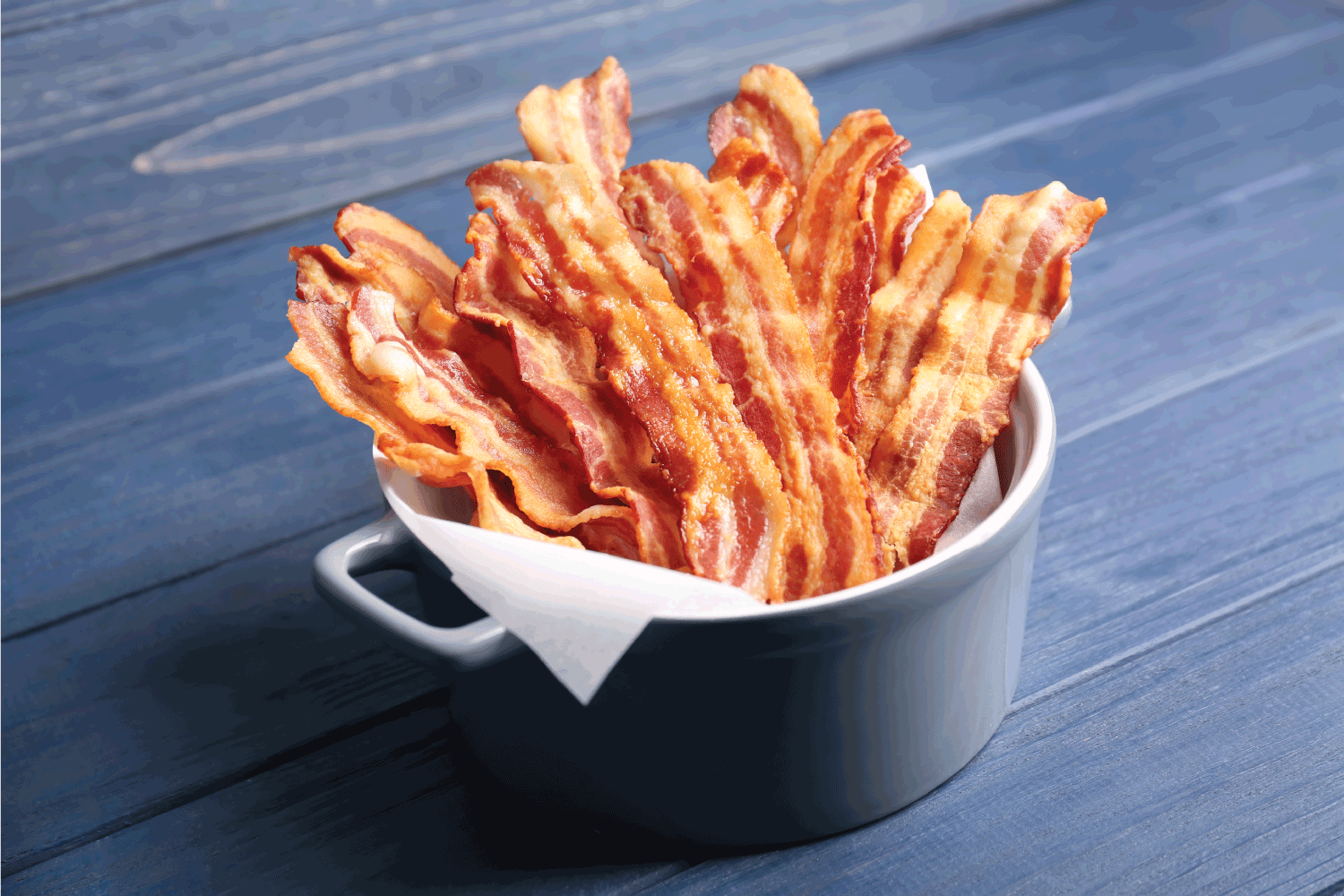 Although scientists are still investigating why this is the case, a large part may have to do with the preparation method. Chefs always place bacon on two layers of paper towels when popping them into the microwave. Not only does this trick make cleanup a breeze, but it also absorbs all of that excess fat.

By contrast, when you cook bacon on a skillet, there’s going to be a lot of splatter in your pan. This is great for chefs who use bacon drippings in other recipes, but it’s not so hot for our health. If you are going to fry bacon in a pan, be sure to use a screen to save on cleanup time.

Is It Bad To Cook Bacon In The Microwave? 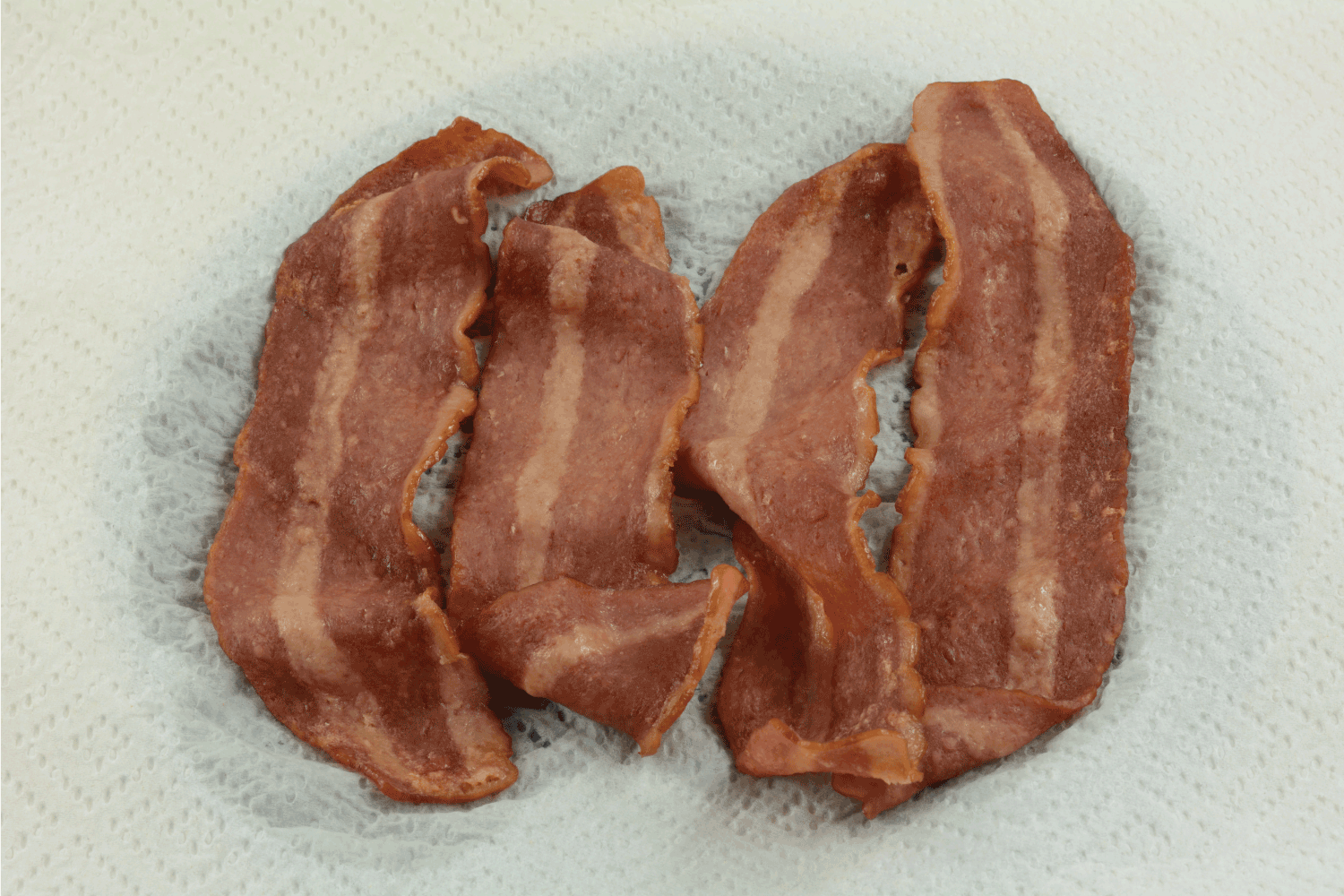 Cooking bacon in the microwave may not be traditional, but there’s nothing wrong with it. In fact, many home chefs prefer putting their strips of bacon in the microwave. Not only is it easier to prepare your bacon in the wee hours of the morning, but it’s also simpler to clean all of the bacon splatters. As long as you line your bacon with plenty of paper towels, there’s less risk of having to wipe away an oily mess after breakfast.

However, some people complain that microwaved bacon doesn’t have the same taste as skillet seared bacon. It’s also easier to miscalculate your microwave time, especially with thinner strips of bacon. If you’re not careful, your bacon could easily get burnt while in the microwave.

On the flip side, cooking bacon in the microwave removes more calories and fat than other cooking methods. So, if you’re more interested in a healthier option, microwaving may be better for you.

At the end of the day or, should we say, the “beginning of the day?” choosing to cook bacon in the microwave is a matter of personal preference. There’s nothing bad about using this kitchen device, but some people might not like the tradeoffs in the taste department. If you’ve never tried cooking bacon in the microwave before, you should give it a try and see if it meets your expectations.

How Many Minutes Do You Microwave Bacon? 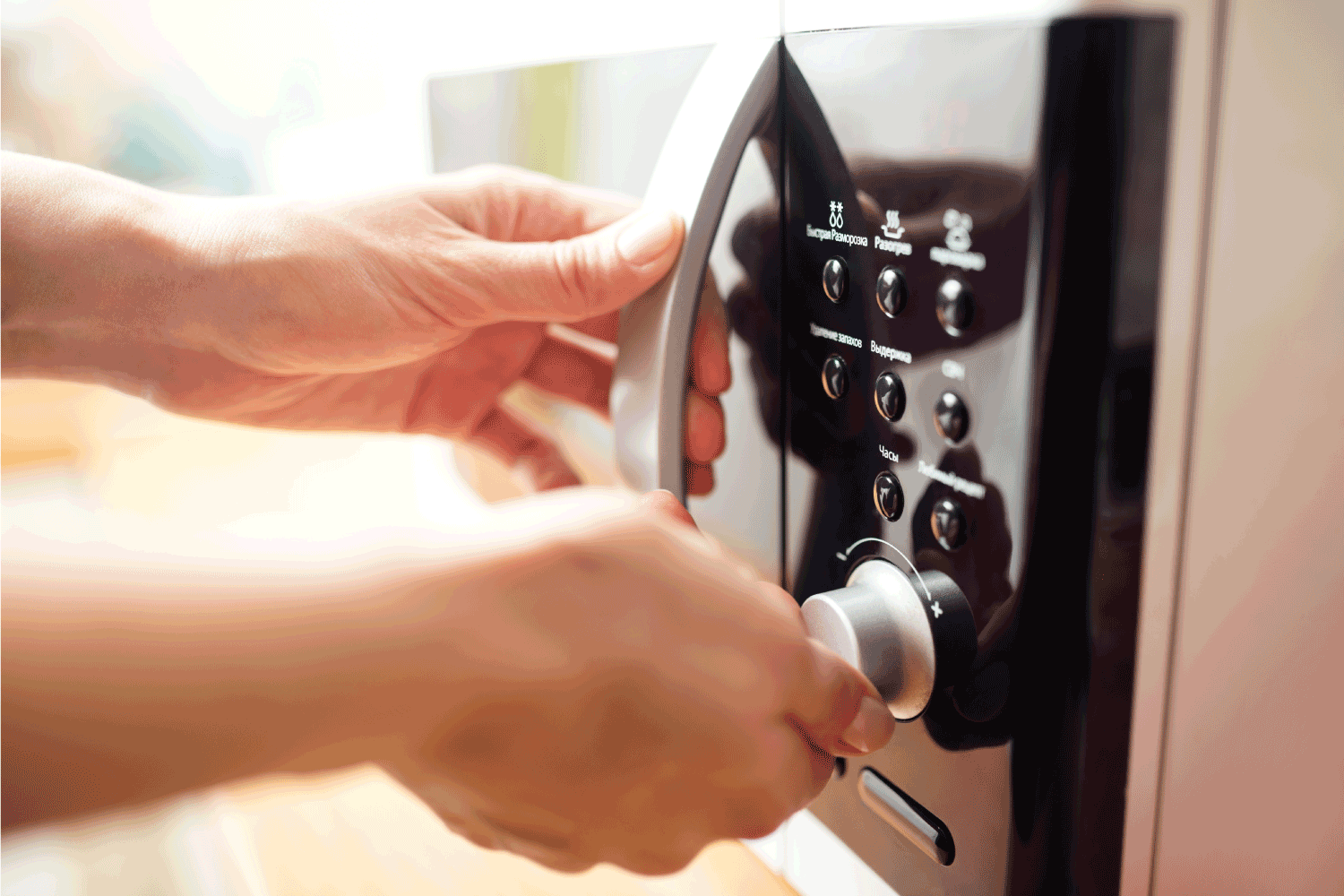 There’s no magic number for how long to keep your bacon in the microwave. Chances are you will have to adjust your microwave’s intensity and time depending on the thickness of your bacon strips and how crispy you like them.

However, here’s a general guide you could use to cook your bacon in the microwave:

If you’d like a video guide to cooking bacon in the microwave, be sure to watch this popular YouTube video.

How Do You Make Bacon With Less Fat? 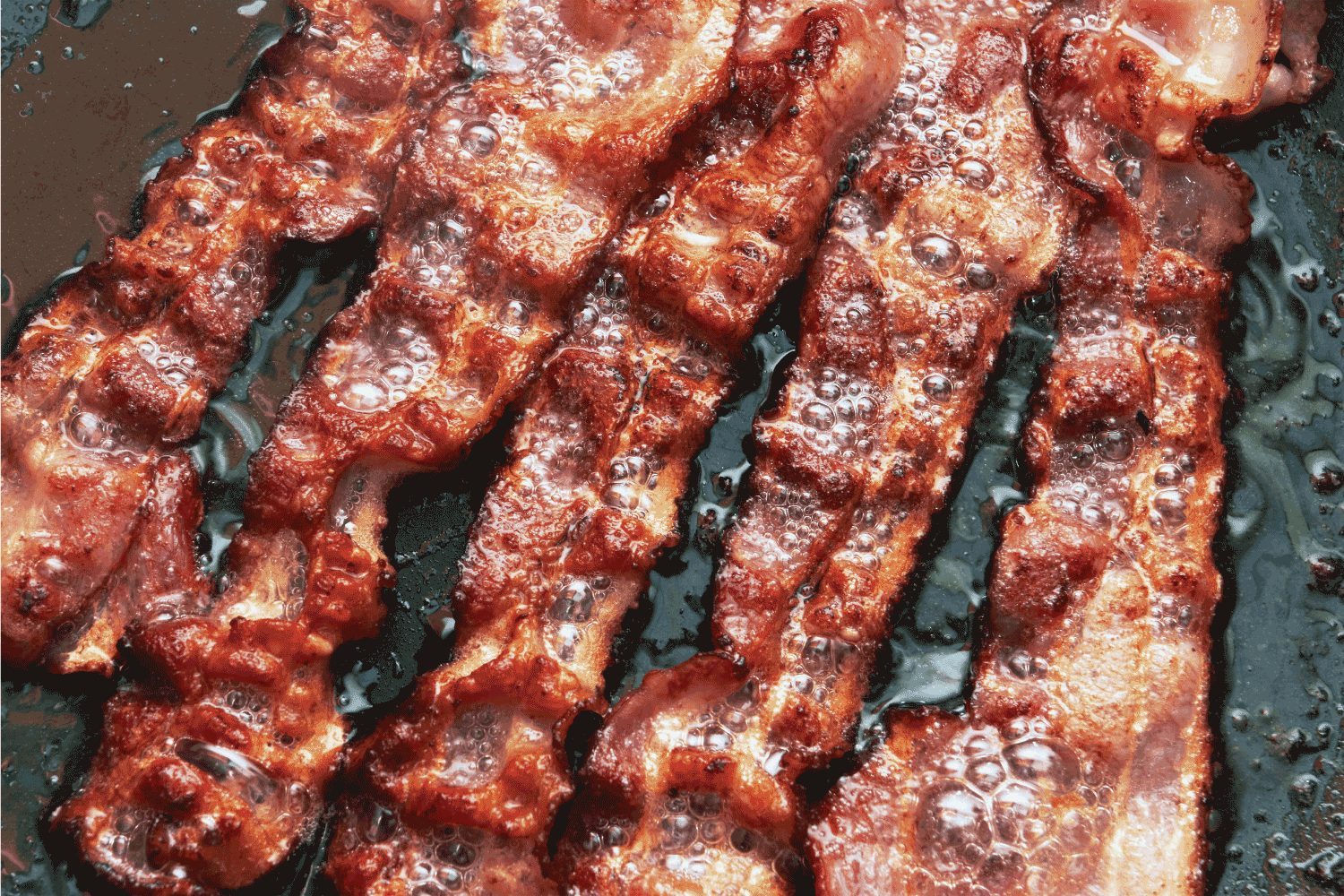 No matter what cooking method you use, there’s always going to be fat in bacon. However, you could dramatically reduce your fat intake by starting with the leanest cut of bacon in your shop. While this may seem like an obvious tip, it’s the most effective way to reduce fat content. The less fat there is in your bacon, the less you will end up putting in your belly.

Traditionally, back bacon is considered the meatiest cut you could purchase, while side-bacon is the fattest. However, you could generally tell how much fat is on your bacon strips as you’re going through the supermarket. Take a close look at the white lines on your bacon and look at the total fat content for each product.

While you’re prepping your bacon, you could also cut off the white fat lines and discard them. Nutritionists also recommend draining away excess fat while cooking to decrease your overall fat intake.

Is Baking Bacon Healthier Than Frying? 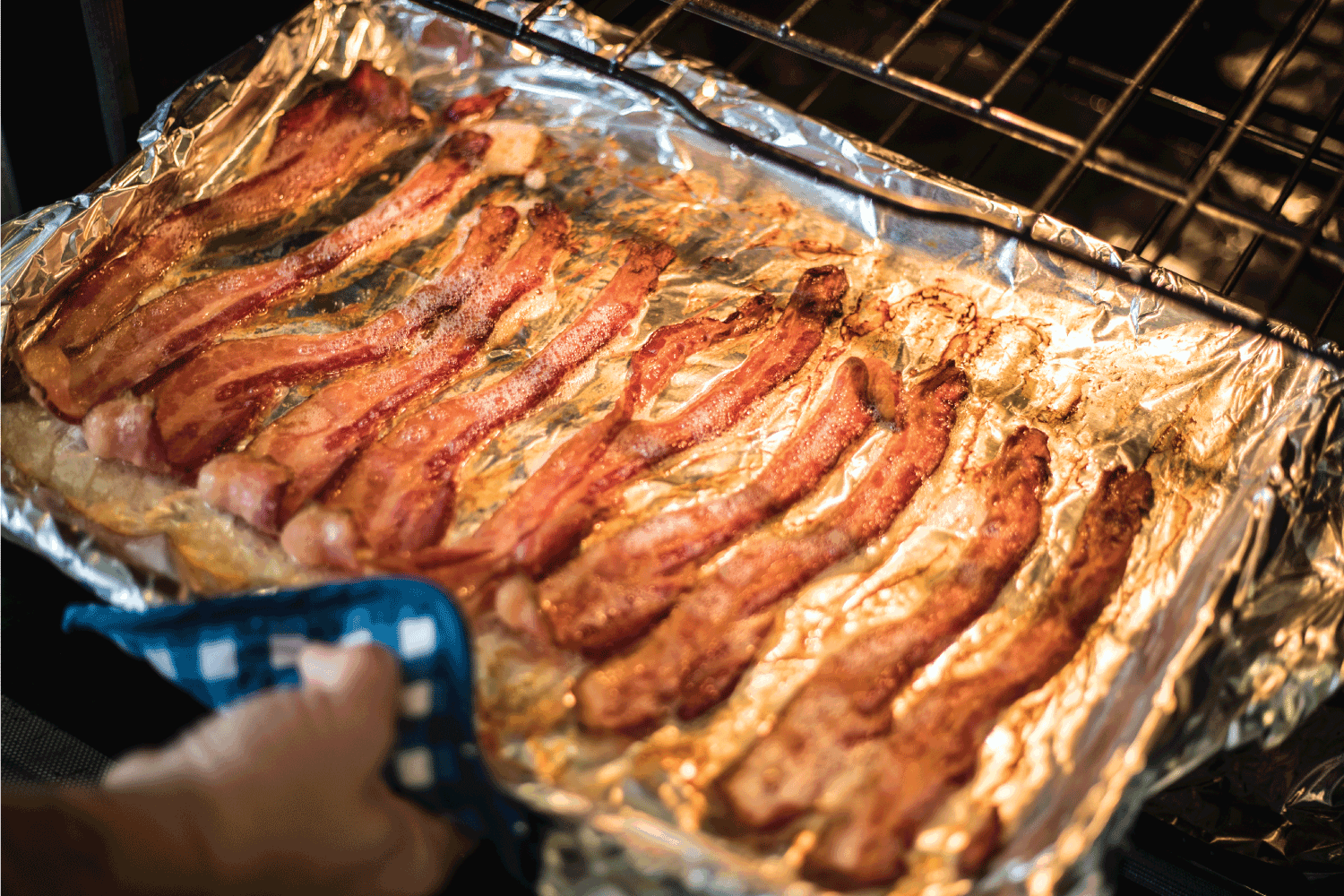 Like microwaving, baking seems to get rid of excess fat from your bacon. This is especially true if you’re using a baking rack with paper towels underneath. The oil from your bacon will fall onto the paper towels, which means it won’t get into your gut.

Many chefs have also expressed great results using a rimmed baking sheet with parchment paper to bake their bacon.

While you could dry bacon from a frying pan, it’s far more difficult to fully remove all that excess oil. Plus, frying already has a bad reputation as one of the worst cooking methods from a nutritional perspective.

However, since bacon tends to splatter, you should be extra careful about oven smoking. To learn more about this safety hazard, please read our post explaining “Oven Smoking — What To Do?”

Is Air Frying A Healthy Way To Cook Bacon? 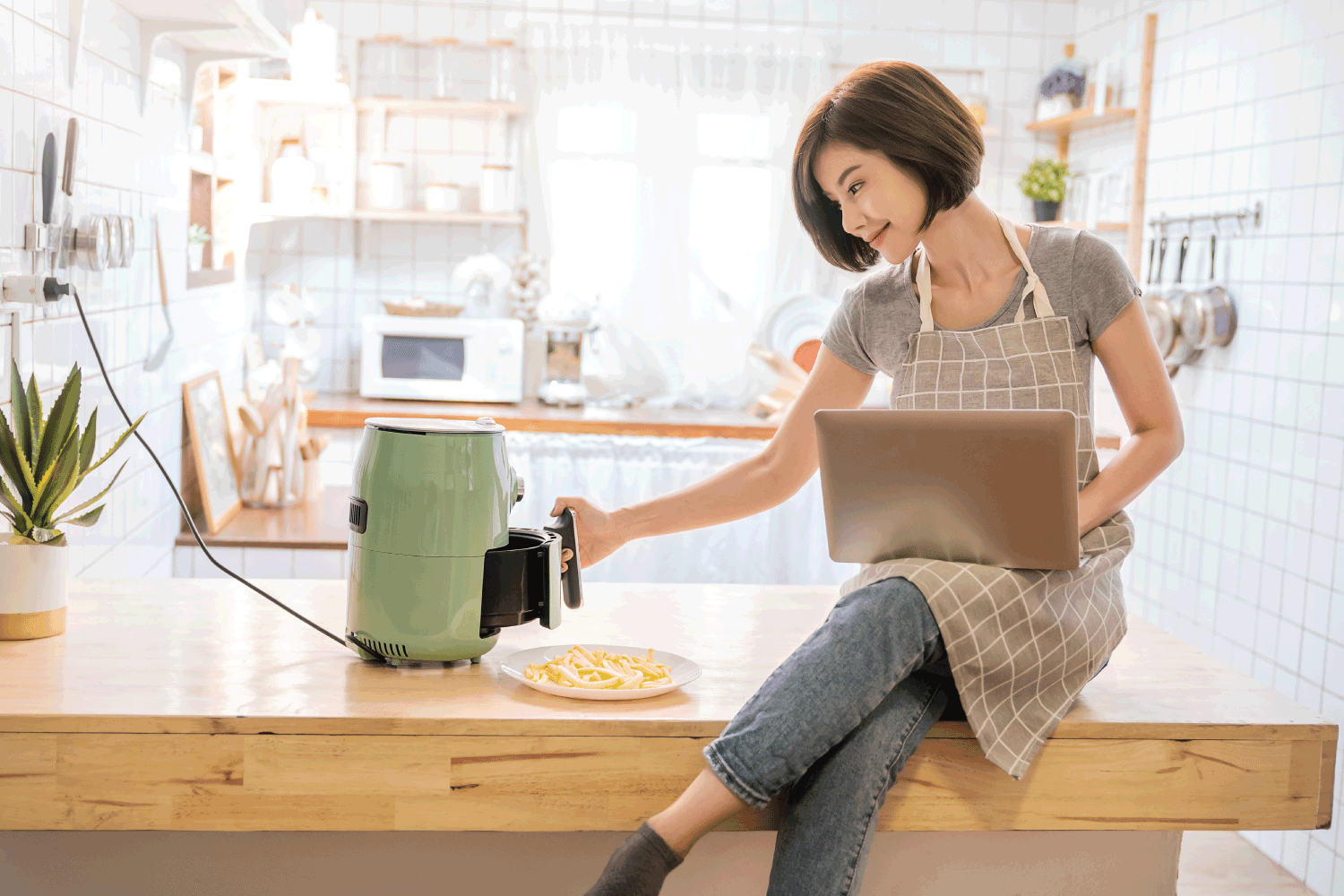 Although many people have tried to cook bacon in an air fryer, it doesn’t get rave reviews from pro chefs. Indeed, many people who try to use an air fryer complain about bacon fat swirling inside their unit. If you use this method, you will have to clean out all of this excess oil a few times, especially if you’re making a large batch of bacon.

While it’s not impossible to cook bacon in an air fryer, you need to be prepared to frequently dump the oil. You also have to be extra careful about handling this oil to avoid a messy cleanup.

Bacon might not be the bomb in air fryers, but there are plenty of other recipes you could whip up in this unit. If you need a little air fryer inspiration, be sure to check out Kitchen Seer’s post “10 Ways To Air Fry Potatoes.”

Bacon will never be considered a superfood, but you can make it healthy-ish by using the microwave. Most reports suggest microwaving bacon helps dial down the total fat content and calories. However, this health tradeoff may not be worth it for fans of skillet-fried bacon. While microwaving bacon has a lot of pros, your tongue will always be the ultimate judge. Be sure to try microwaving, baking, and frying bacon to discover your preferred cooking method.

How To Make Pizza Crust Crispy On Bottom

Can You Grate Cheese Ahead Of Time?