If you’re going to handle hot pots and pans, you need some way to keep your hands protected. While oven mitts are safe and sometimes stylish, many chefs claim plain old towels work just fine. You may have even seen a few TV programs where hosts grab side towels to handle their scorching cookware. But just because people use towels on TV doesn’t necessarily mean it’s safe, right? If you’re curious whether to ditch your mitts for towels, be sure to read the research we’ve compiled below.

You can use a kitchen towel in place of an oven mitt. Some people even claim that using kitchen towels to hold hot items is a more comfortable and versatile option. However, choosing between towels or mitts is primarily a matter of personal preference. Whatever product makes you feel secure is the right one to use.

Every pro chef must have plenty of towels in the kitchen. Not only will these towels help wipe away spills, but they could also be helpful when handling hot objects. But how exactly do you use towels in lieu of oven mitts? Please keep reading for more hot tips. 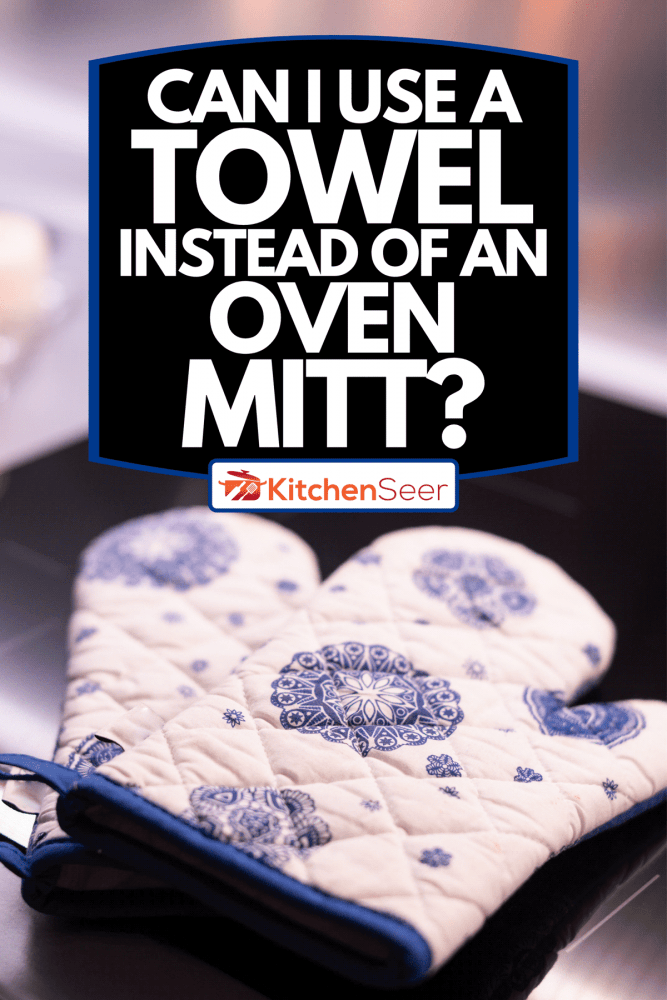 Is It Okay To Use Towels Instead Of Oven Mitts?

If you prefer using kitchen towels to oven mitts, it’s perfectly alright to do so. The key feature you need to consider is whether you feel safe using them. As long as you feel in control when handling cookware with towels, it’s OK to use them. Also, please note that you usually have to fold towels two or three times before picking up hot items. Generally, towels won’t create enough of a buffer if you use one layer. 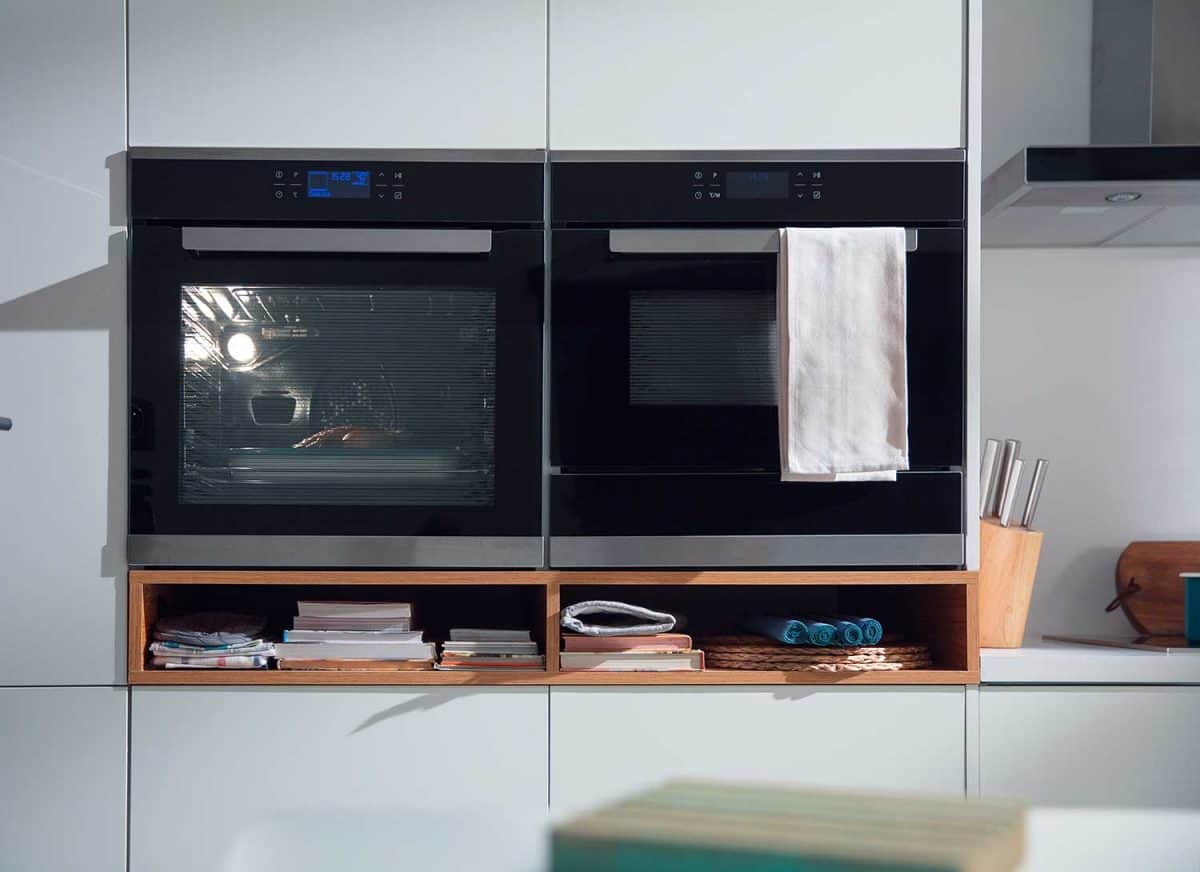 Why Do Chefs Not Use Oven Mitts?

It’s unknown how many chefs are anti oven mitt, but many online forums suggest professional chefs prefer using towels. The main reason given for this preference is that towels are more convenient. Typically, there are plenty of dry towels lying around the kitchen, so it doesn’t take that much time to find one.

Another benefit of using towels is they’re easy to wrap around awkward pans or pots. For this reason, some people claim they get a better grip with towels versus oven mitts.

Often, people in the pro towel camp claim they’re easier to keep clean. This might be because chefs have loads of towels hanging around, so it’s easy to always have a clean batch on hand. By contrast, most people only have one pair of oven mitts, which means they’ll need to schedule their washes strategically.

Just keep in mind that most of these arguments are personal preferences. Some chefs enjoy the convenience of having many towels nearby. However, you can find plenty of other people who say they enjoy wearing oven mitts.

If you’re new to cooking, you should try both of these items and see which you prefer working with. You may find that oven mitts work best for some tasks, while towels are fine for others—in which case, you could keep both in your kitchen!

By the way, if you need tips on safely placing pots in the oven, you’ve got to check out our post on “Putting Le Creuset Pots In The Oven.”

Why Is It A Bad Idea To Use A Wet Potholder Or Towel?

It’s never a wise idea to use wet potholders, towels, or oven mitts when handling hot items. The excess water will conduct heat, which defeats the purpose behind these items (i.e., to protect your hands). You will scald your skin if you use a damp towel while cooking.

However, there are a few silicone oven mitts that promise to be waterproof. So, if you’re extra afraid of mistakenly using a wet towel, you may want to research one of these products.

What Is The Difference Between A Tea Towel And A Flour Sack Towel? 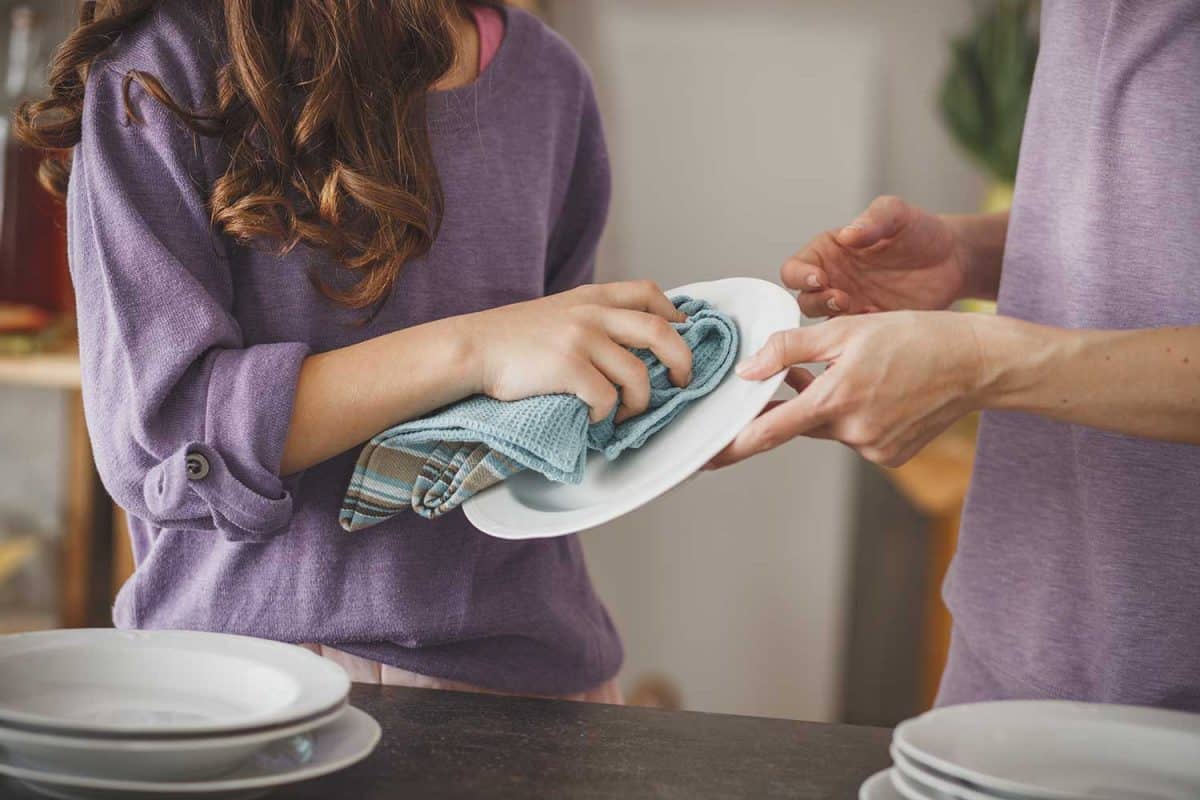 Surprisingly, there’s no such thing as a generic kitchen towel. Indeed, most kitchen towels nowadays fall into two categories: tea towels and flour sack towels. While these towels share many features, there are a few nuances new chefs should keep in mind.

First off, tea towels were initially invented for that beloved British custom: tea time! As you’d expect, these towels were often ornately embroidered and used for delicate tasks like protecting your hands while opening a tea kettle. Traditionally, tea towels are made with linen and are rather thin. This makes tea towels fantastic for drying breakable items like glasses, chinaware, and, of course, teacups!

Flour sack towels originated out of desperation rather than decadence. As more households in the 1930s tightened their belts, they started using flour sacks in the kitchen. Today, most flour sack towels are made with cotton and have a thicker texture than tea towels.

How Do You Make Potholders Out Of Dish Towels?

Even if you don’t consider yourself crafty, it’s not all that hard to transform dish towels into DIY potholders.

For a video tutorial on this simple method, be sure to check out this YouTube video.

Microfiber is another popular material used in a few towel brands. Since these towels have countless tiny fibers, they’re excellent for scooping up dust, dirt, and grime. However, chefs should know this material wasn’t designed with heat in mind.

Unlike standard cotton towels, microfiber products tend to be thinner and less heat resistant. If you have microfiber towels in your kitchen, it’s best to reserve them for drying and polishing rather than picking up pots. If you are going to use microfiber towels to carry hot pots, be sure to ask the manufacturer whether it’s safe to do so. 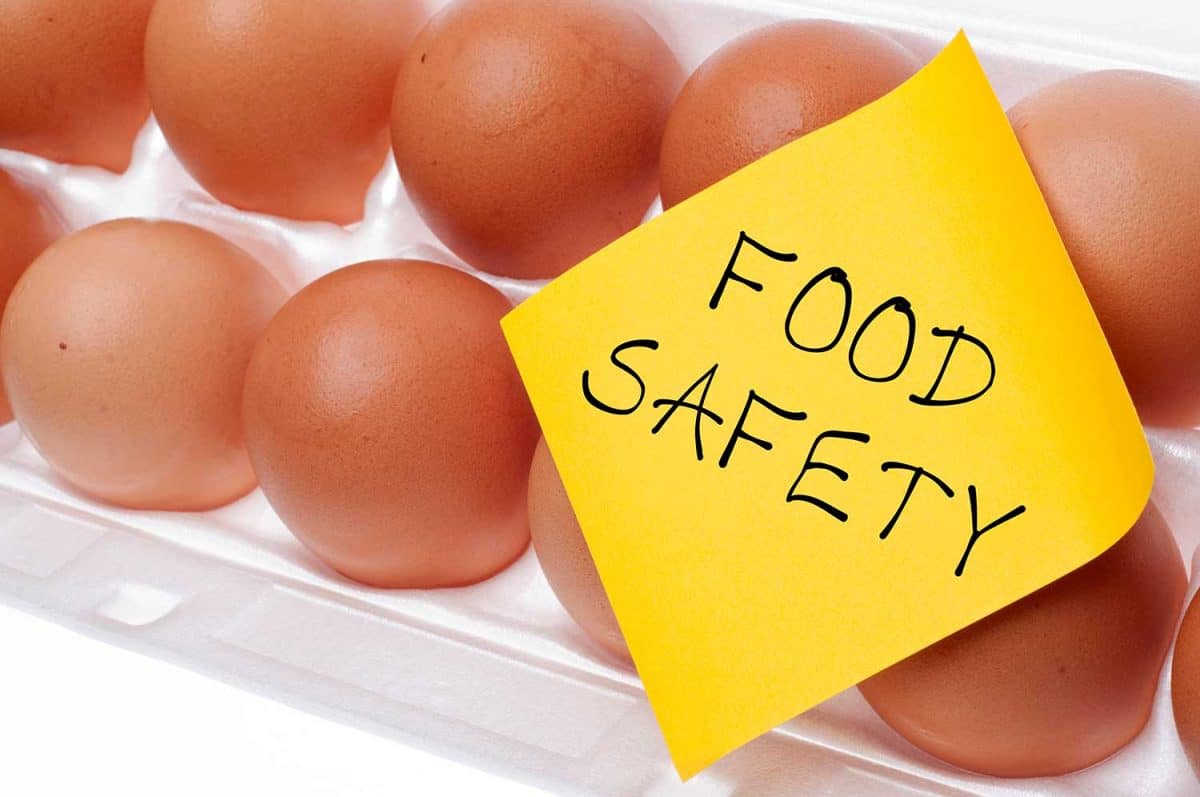 When you’re concentrated on cooking, it’s easy to lose track of where each towel has been. Unfortunately, this means bad bacteria could easily creep into your towels and onto your pots. So, if you’re using towels for many purposes, there’s a chance it could spread common illnesses like staph or salmonella.

For this reason, you need to be extra cautious when using towels to clean up messes, cover coughs, and prepare meals. If you have any doubts about your towel, don’t use it! It’s always better to toss dirty towels in the laundry and grab new ones before cooking.

Pro tip: Many chefs pre-measure their herbs and spices in ramekins before seasoning raw meat. This simple strategy decreases the risk of spreading harmful bacteria to salt and pepper shakers. It also makes it less likely you’ll reach for a towel while you still have bacteria on your hands.

To learn more interesting tips on using ramekins in the kitchen, be sure to read KitchenSeer’s “Ramekin 101” guide.

Towel Or Oven Mitt? It’s Up To You!

While you should always have kitchen towels nearby, choosing to use them instead of oven mitts is up to you. Just be sure you’re not using a damp or dirty towel to grab your hot pans. Wet towels or oven mitts won’t keep your hands safe in the kitchen.

By the way, if you’re going to carry towels around the kitchen, you’ll need a good apron. If you’ve never worn an apron before, then you’ve got to check out our previous post entitled, “Are Aprons One Size Fits All?”

Can Silicone Pot Holders Go In The Dishwasher?

When Should You Take Off Your Apron?

How Should You Hold A Red Wine Glass?