If you love cooking, chances are there's a ton of equipment you have up for the task. One of them might be a Staub cast iron. As you might know, standard cast iron pans require you to season them after washing them. While that's a necessary process for usual cast irons, is it a requirement for one by Staub? If that's what you're wondering, let's take a deeper look!

Staub recommends that you season your cast iron once in a while with a light brush. Though, it's not a necessity to do it like you would standard cast iron. This is because it is not unfinished like typical cast iron. It is an enameled variant that can hold up in more situations. However, seasoning one still has its benefits.

Seasoning can be a bit of a chore. You have to deal with the messiness of oil. But, Staub eliminates that part of the equation for you. Though, that doesn't mean you shouldn't season it at all. Even Staub recommends seasoning from time to time. If you'd like to find out why to do so, keep reading ahead.

Regarding the seasoning, Staub recommends you do it once in a while to preserve the shine.

Of course, you shouldn't do this straight out of the packaging. Unlike unfinished cast iron, enameled variations use the enamel for a reason. It functions much like the seasoning on regular cast iron cookware. 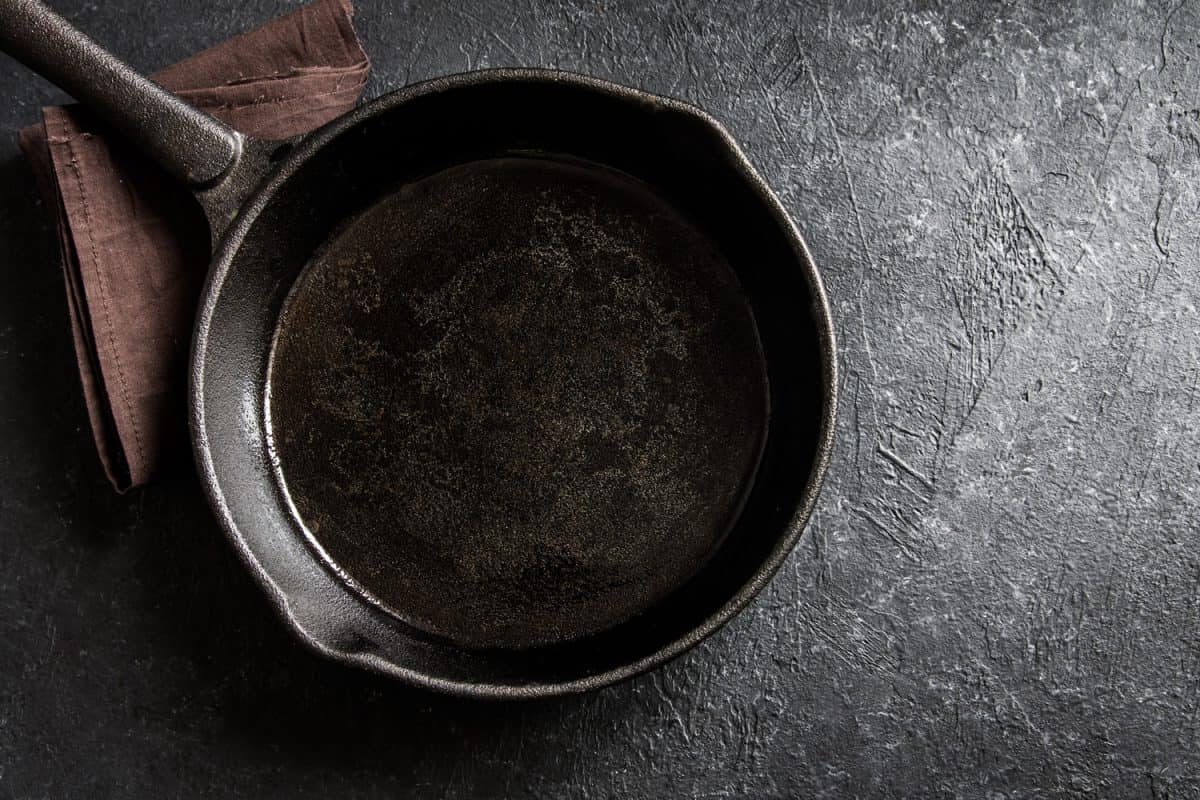 So, if you season it the same way you would an unfinished cast iron, you might experience a lot of flaking. The seasoning itself will start coming off. This situation is a standard occurrence.

Washing and maintaining enameled cast iron like Staub is a less complicated process. If you'd like to know how to do so, let's take a look.

The first instance of maintenance is when you first acquire the cast iron. Staub claims that all their products are enameled on the outside and inside.

Instead of the old tried and true standard of seasoning before use, Staub recommends washing the cast iron in warm water and dry entirely before use.

How Do You Season a Cast Iron Staub? 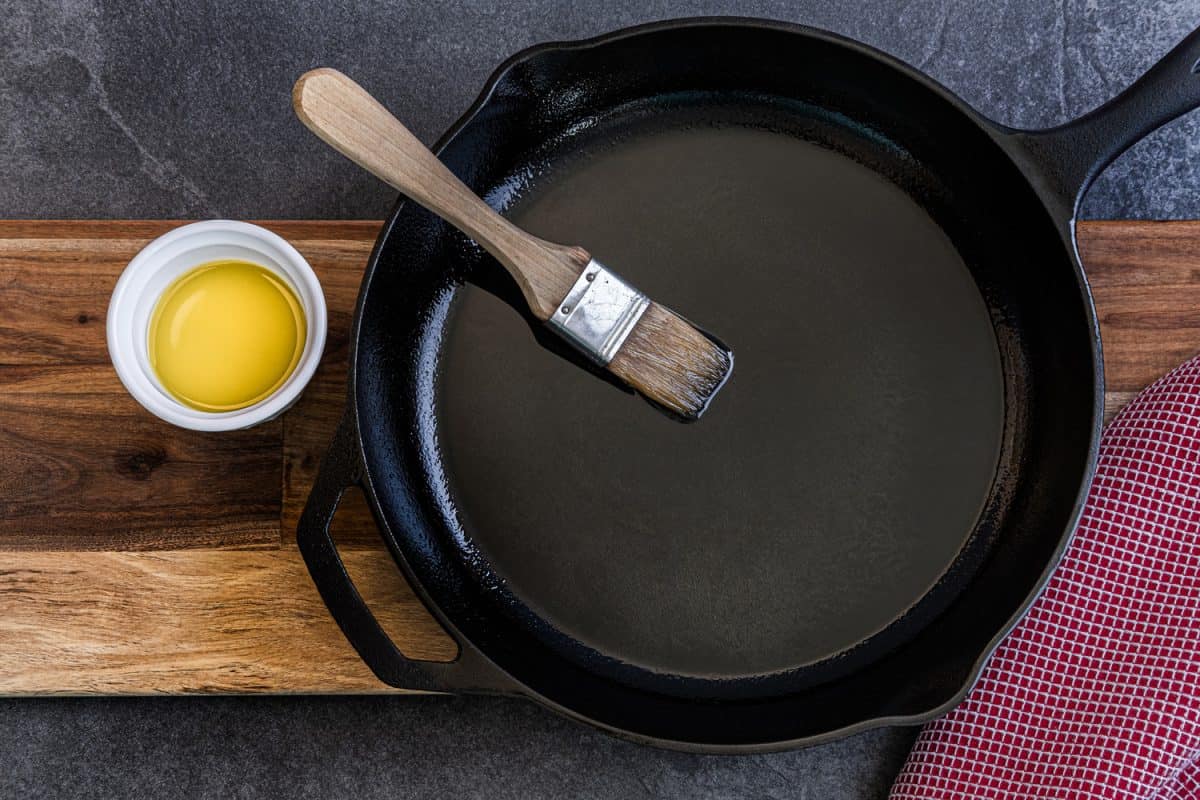 Now here comes the part you've been looking for. Seasoning a Staub cast iron is not the same as a standard one.

Standard cast irons require you to use any vegetable oil on all sides of the cast iron. The reason is that it helps prevent rust from developing in all areas.

While that may be true for unfinished variations, Staubs products do not require you to do so. Instead, they recommend brushing a little vegetable on the inside surface.

Though, like standard cast irons, you will have to heat it at a low temperature for a few minutes. After this period, you should wipe off any excess.

If you're wondering about seasoning after cleaning, there's no need. Again, after looking further into Staub's recommendations, they do not require you to season their cast irons.

Instead, you can go about cleaning them like you normally would any other cookware. However, that's not too specific.

Let's take a look at how you can wash and maintain a Staub product.

Can You Use Soap on Staub?

Click here to see this dish soap on Amazon.

The first concern that might come to your mind is, can you use soap on Staub? If you're familiar with traditional cast iron, you'll find that the consensus is that you should not use soap.

Or, if you'd like to use soap, you have to use a small amount to reduce stripping away the beneficial oil on it.

If you hate having to avoid soap, you'd be pleased to find that Staub products have few restrictions on them. You should avoid using abrasive detergents or sponges on your Staub cast iron.

Instead, use warm soapy water with a nylon brush to scrub it. This way, you preserve the enamel and the looks of the cast iron.

Again, this explanation isn't much to go on if you want to clean it while maintaining peace of mind. So, without further ado, let's go over a quick guide on washing your Staub cast iron.

Let's say you finish cooking and now you need to clean the cast iron. The first step is to let it cool down for 15 minutes.

Then, use a mix of soap and warm water on the inside of it. Use a non-abrasive scrub, preferably a nylon scrub brush, to remove any residue.

Rinse it out and let it dry before storing it away. To prevent moisture from building up on the inside, leave the lid open.

As mentioned above, you don't need to go through the lengthy process of cleaning standard cast iron. Though, that doesn't mean you should neglect the outside of your pan.

It's best if we keep our cookware looking as good as new. After a while, you might notice some dirty spots on the outside.

To remove those eyesores, you'll need a kitchen cleanser.

To use the cleanser above, you'll start by dusting it on the surface of the pan with some water. The paste should sit for about 1-2 minutes.

After, use a non-abrasive brush to scrub. Rinse and wash the residue off with warm water. At this point, your Staub cast iron should have a refreshing new look! 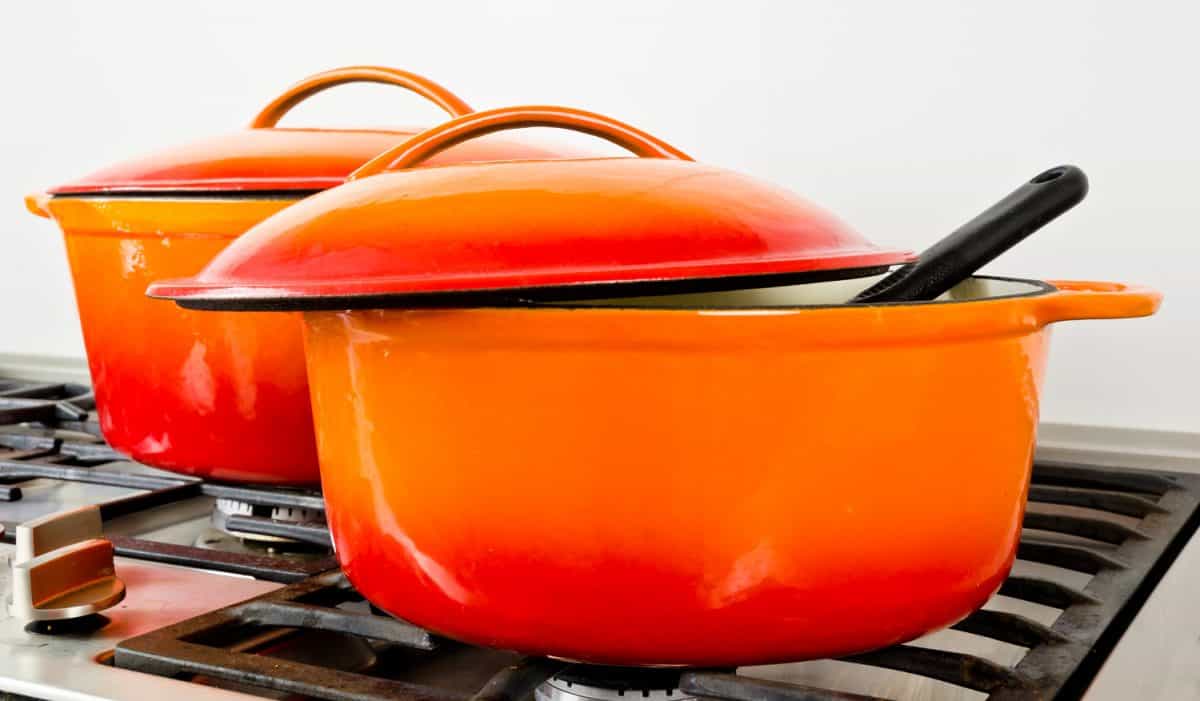 Now that you know how to maintain Staub cast irons, it might be confusing how it works. After all, a cast iron that requires no seasoning sounds like a dream.

It might have you wondering, are they preseasoned? In that respect, no, they're not.

It comes with the added benefit of protecting the core material of your pan. In this case, it protects the cast iron pan itself. For this reason, manufacturers like Staub won't recommend you season the cast iron entirely.

In addition, the enamel is a great heat conductor, prevents rust on your cast iron, and washes easily. Does it come at the cost of performance in some areas?

The answer depends on several factors. But, that's a topic for another time.

Unfortunately, it also has its cons. We can't always have good things!

If you'd like to know what it has to offer, let's go over the benefits! The first and obvious benefit straight out of the box is durability. It won't rust. It's washable with soap, looks great, and requires less to maintain.

But, all good things must come to an end. The inner enamel coating is not that durable. If you're clumsy in the kitchen, an enameled cast iron might not fair well.

It's susceptible to chipping and scratches. In comparison, if you drop an unfinished cast iron, you won't have to worry about damages to the surface.

How Do You Clean a Burnt Staub?

After using Staub cast iron for a while, it might start to develop some burned spots. Now, how do we get rid of it?

As some forum users suggest, the first method to try is boiling it with baking soda and water inside. If the burn area is stubborn, you will need to make a paste out of baking soda.

Add a few drops of water into a spoonful of baking soda. Cover the burn area with the paste evenly. From here, let the paste sit in the pan overnight. You can use this paste on stains on the outside of the pan too.

After a day, use a non-abrasive tool to scrape off the paste. Get as much of it out of the area. Then, rinse it with water and dish soap.

If there are leftovers, you can use an abrasive sponge to get rid of the remaining marks. Though, it's better to use a bit of elbow grease to remove it without an abrasive material.

The second method is less likely to occur. So, let's go over how to do the first one. The materials you will need are:

First, fill your Staub cast iron with one quart of water. Set it on a burner on medium heat. Wait until you see bubbling indicating the water is boiling.

Once it's boiling, add two teaspoons of baking soda. Stir it with a wooden spoon and let it simmer for a few minutes.

At this point, you want to take your wooden spoon and scrape the burned area. If this method is successful, the burned bits will be floating in the boiling water.

Turn off the burner, pour the solution down the drain, and rinse your cast iron with hot water.

Your cast iron should look as clean as before! 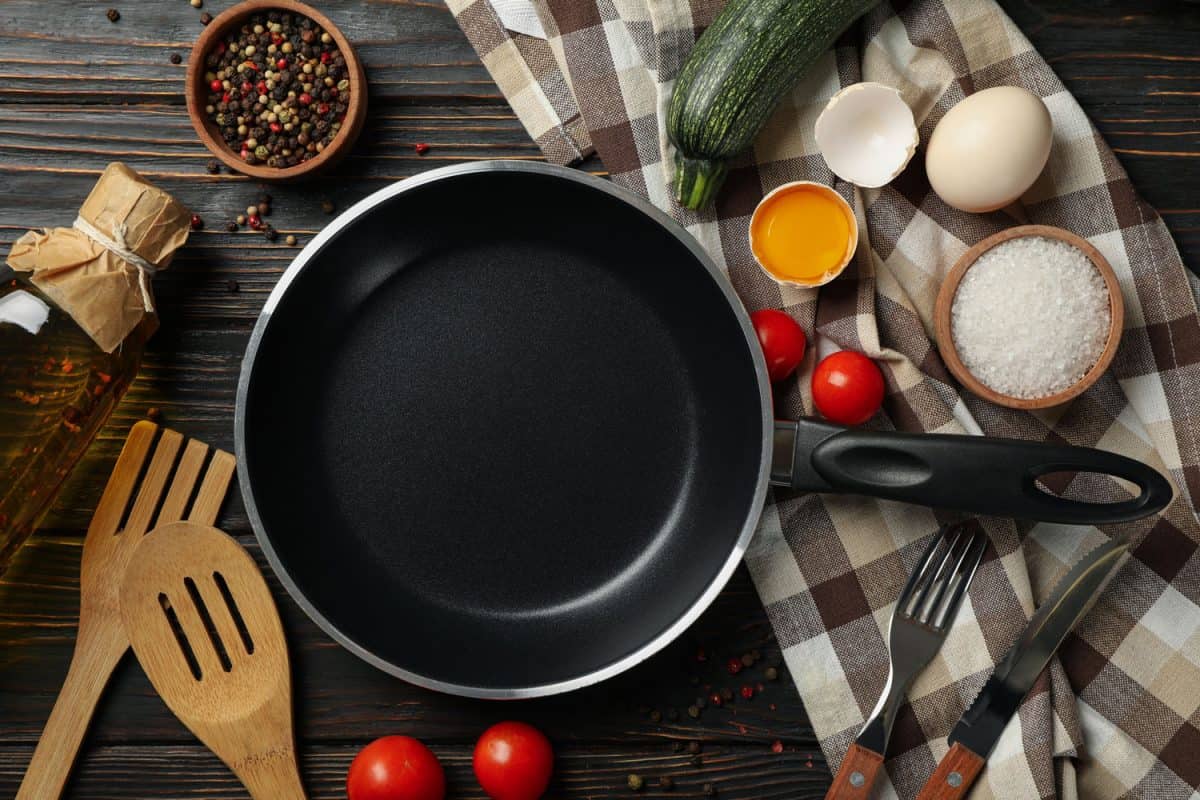 Maintaining your kitchenware should be at the top of your priority. So, it's no wonder you went searching for answers when your Staub cast iron needed some maintenance!

If maintained correctly, it can last you for a long while. We hope you found the information above insightful.

Before you go, do you have other cast iron concerns? Are you still thinking about picking up a standard cast iron? You might want to know how often you season one. To find out more, check out our post here.

Do you need ideas on what oil to use for your cast iron? You can find out more by checking out our post here.

How Long Is A Chef’s Knife?

Can You Put A Loaf Pan In A Crock Pot Or A Dutch Oven?