Cast iron skillets are a popular choice for cooking because of their even heat distribution and durability. However, what do you do if your food keeps sticking to your cast iron skillet? Let's take a look at how to approach this problem.

If food is sticking to your cast iron skillet, then it will need to be reseasoned. In order to do this, follow these steps: 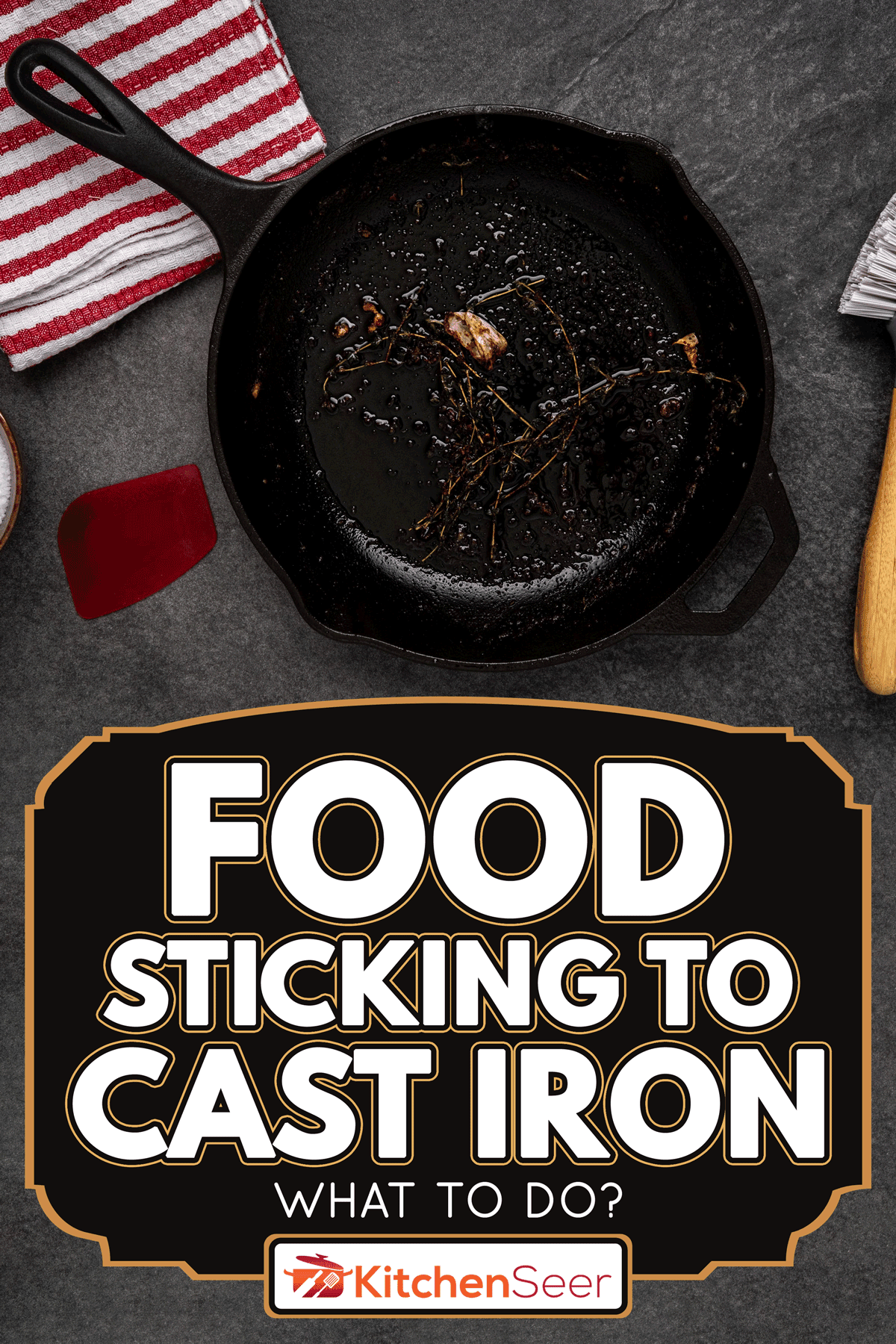 How To Keep Cast Iron Skillet From Sticking

There are a few things that you can do to try to prevent food from sticking to your cast iron skillet. First, make sure that you are using the correct type of oil before cooking.

Vegetable oil, canola oil, or extra virgin olive oil are good options. You may also need to add more oil than you would with other cookware.

Another thing that you can do is to make sure that your skillet is properly seasoned. To season your skillet, follow these steps: 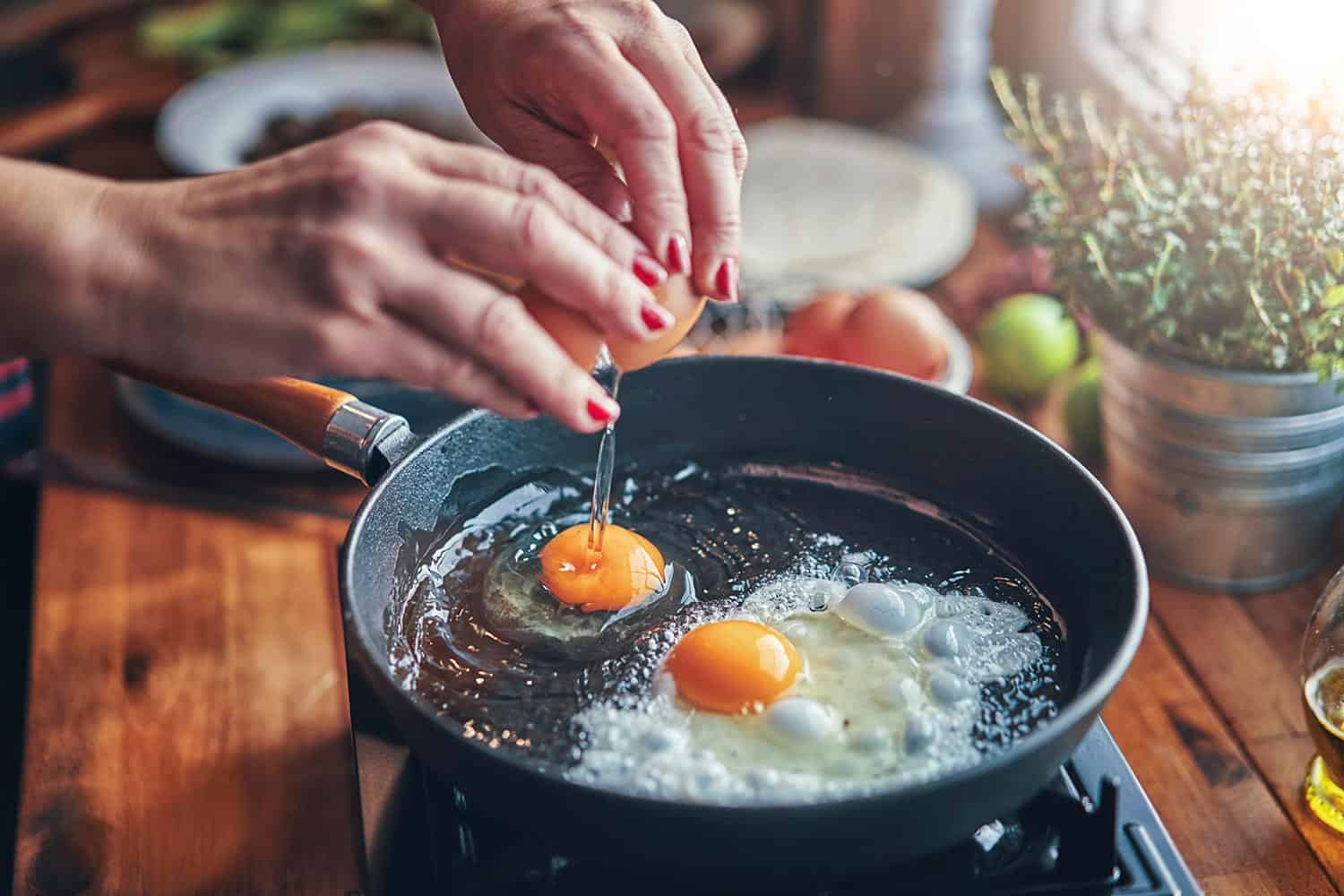 The first thing you need to do before using your cast iron skillet again is to clean it thoroughly. Use hot soapy water and scrub it with a brush. Rinse it well and let it dry.

After the skillet is clean, you will need to apply a thin layer of oil to it. You can use vegetable oil or canola oil, both of which have a high smoke point. You can use a cooking brush or a paper towel to help spread the oil evenly.

After you have applied the oil, put the skillet in a preheated oven at 375 degrees Fahrenheit for one hour. This will help to seal the oil in and help to prevent food from sticking. You can also do this on the stove over medium-high heat.

Let the skillet cool down once the hour is up before using it. Cast iron skillets get extremely hot, so be careful when removing it from the oven.

Now that your skillet is properly seasoned, you should not have any more problems with food sticking to it.

Now that your cast iron is properly seasoned, make sure to apply a thin layer of oil before cooking again. This will help to keep the food from sticking. You can use any type of cooking oil that you like.

Now that you have your cast iron skillet, it is important to know how to use it. Cast iron skillets are great for cooking breakfast, lunch, and dinner. They can also be used to cook main courses, side dishes, or desserts.

One thing that makes cast iron so versatile is that it can be used on the stovetop or in the oven. In addition, due to their durability, they can be used for generations when properly cared for. 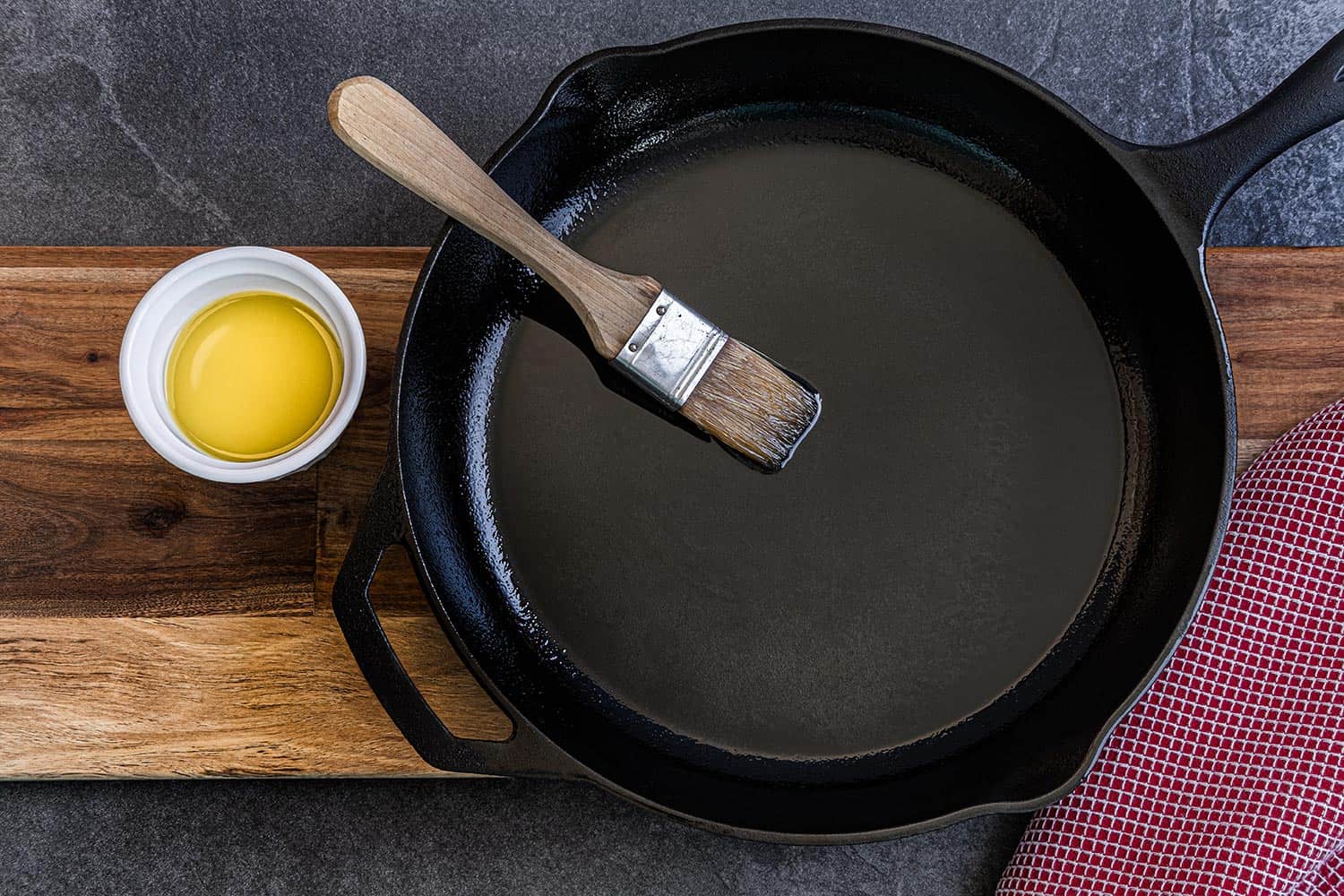 How Often Should You Season A Cast Iron Skillet?

It is important to season your cast iron a few times right after being purchased. How often you should season a cast iron skillet after that depends on how often you use it.

If you use it frequently, you may need to season it every month or two. On the other hand, if you only use it occasionally, then you can season it every six months or so.

Some cooking experts recommend applying oil to your skillet after each use. This will help to keep the food from sticking and will also help to maintain the seasoning. Simply apply the oil using a paper towel or cooking brush, and you are good to go.

What Is The Best Oil To Season Cast Iron?

When seasoning your cast iron, you want an oil with a high smoke point. A high smoke point is important because it means that the oil can be heated to a high temperature without smoking. This is what will help to seal in the seasoning.

Some of the best oils to use are vegetable oil, canola oil, avocado oil, and grapeseed oil. These oils have a high smoke point and are also healthy fats. You can use any of these oils or combine them to season your cast iron.

Olive oil or butter aren't great choices for seasoning a cast iron because they have a high smoke point. As a result, the oil or butter will degrade as you start cooking with it, defeating the purpose of seasoning the skillet in the first place.

However, when it comes to having a nonstick surface just before cooking, olive oil and butter are great choices. 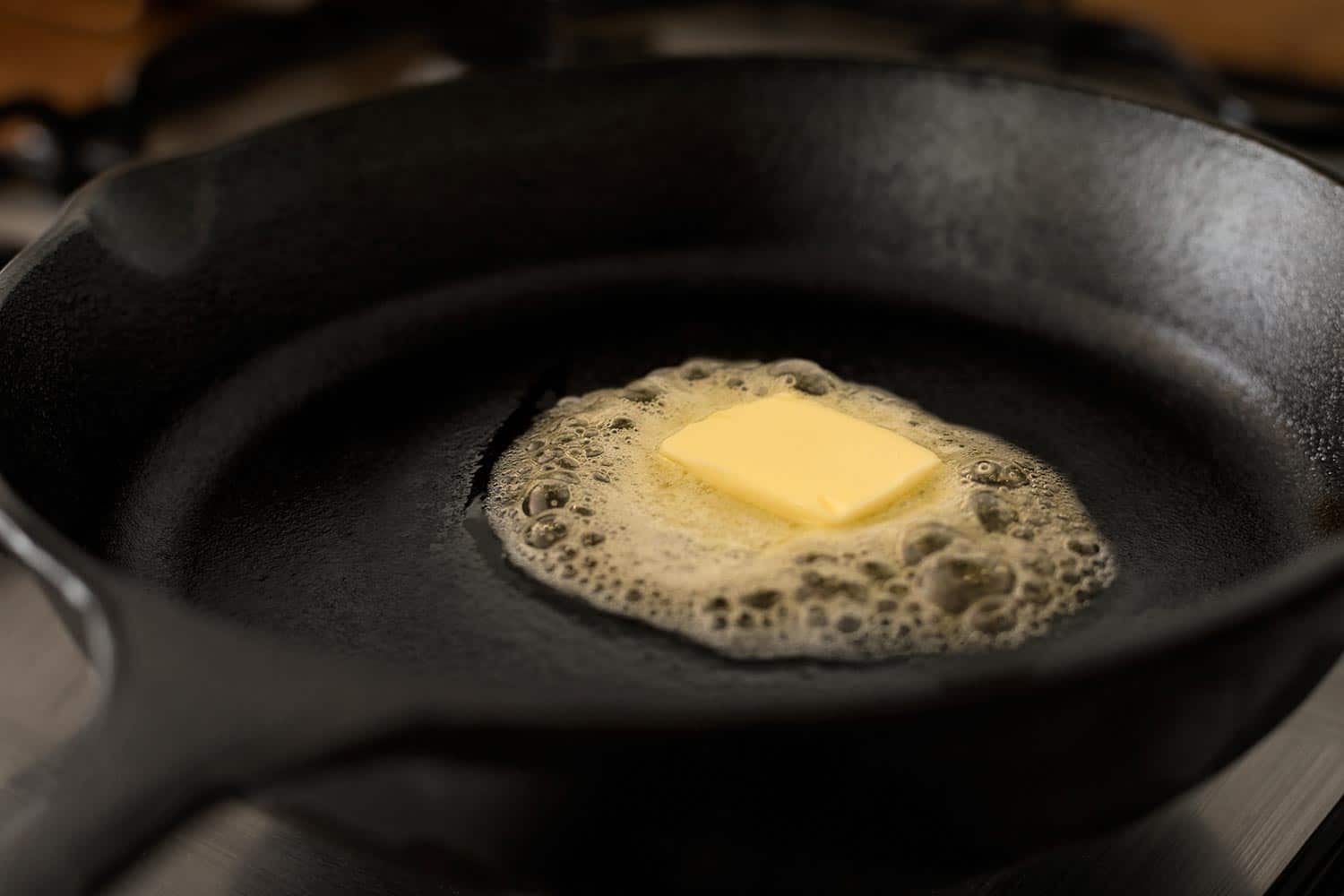 What Is The Proper Way To Clean A Cast Iron Skillet?

One thing to note is that cast iron skillets can't be cleaned like other cookware. You can't put them in the dishwasher, and you can't use soap to clean them.

If you have food stuck to the cast iron skillet and hot water and a scrub brush aren't doing the trick, then add some kosher salt to the skillet. The salt will help loosen the food and make it easier to clean.

Scrub the skillet with the hot water and brush until all of the food is gone. Rinse it well and let it dry. 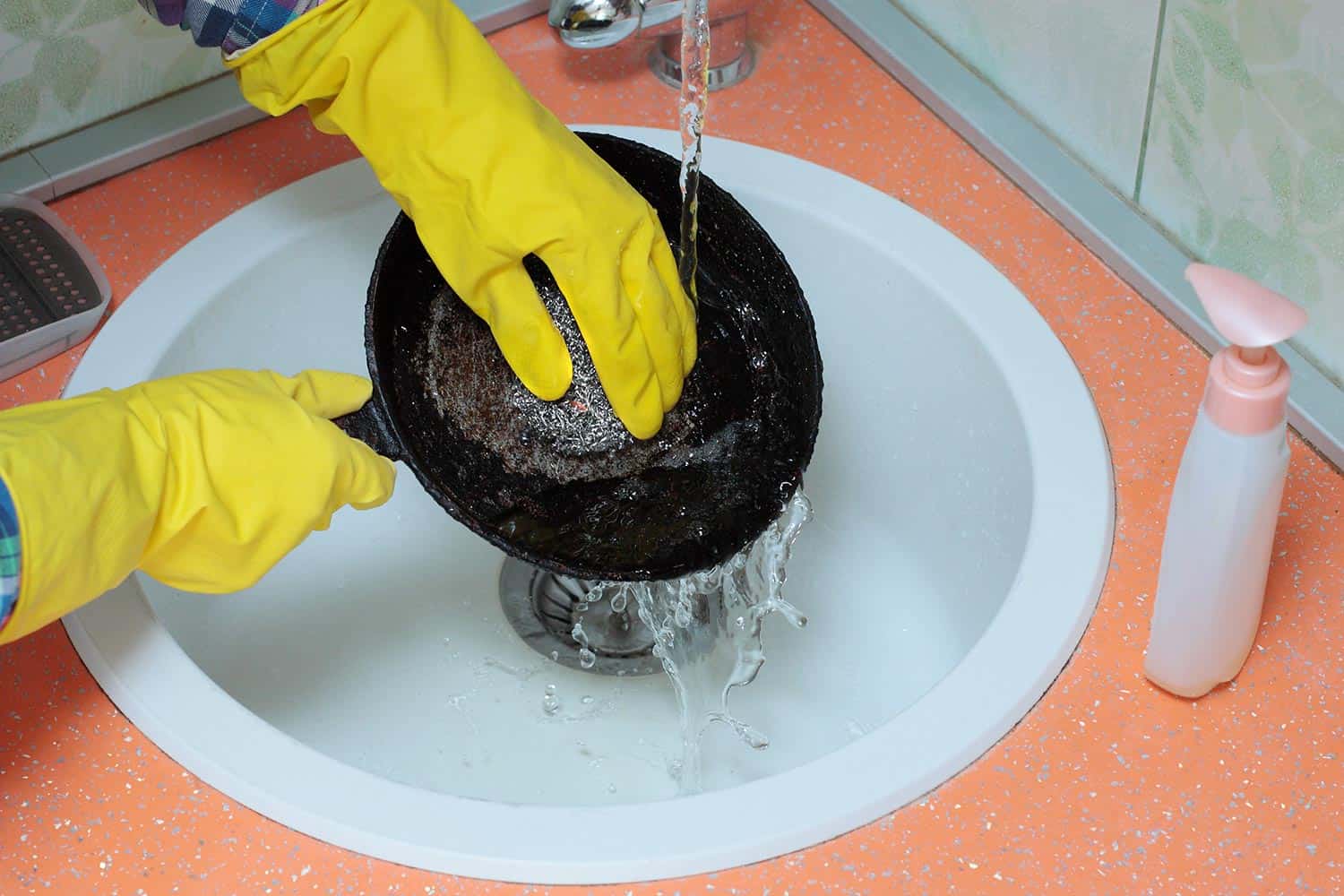 Can You Wipe A Cast Iron Skillet?

Depending on what you cooked in the cast iron skillet, you may be able to wipe it with a wet paper towel. For example, if the food was vegetables, the skillet should be pretty easy to clean.

However, if you cook something like bacon, there will likely be grease and bacon bits stuck to the skillet. In this case, you will need to use a scrub brush and hot water to clean it.

To be safe, it is better to clean it with hot water and a brush as mentioned earlier. The last thing you want is any bacteria or food residue to be left on the skillet.

What Are The Benefits Of A Cast Iron Skillet? 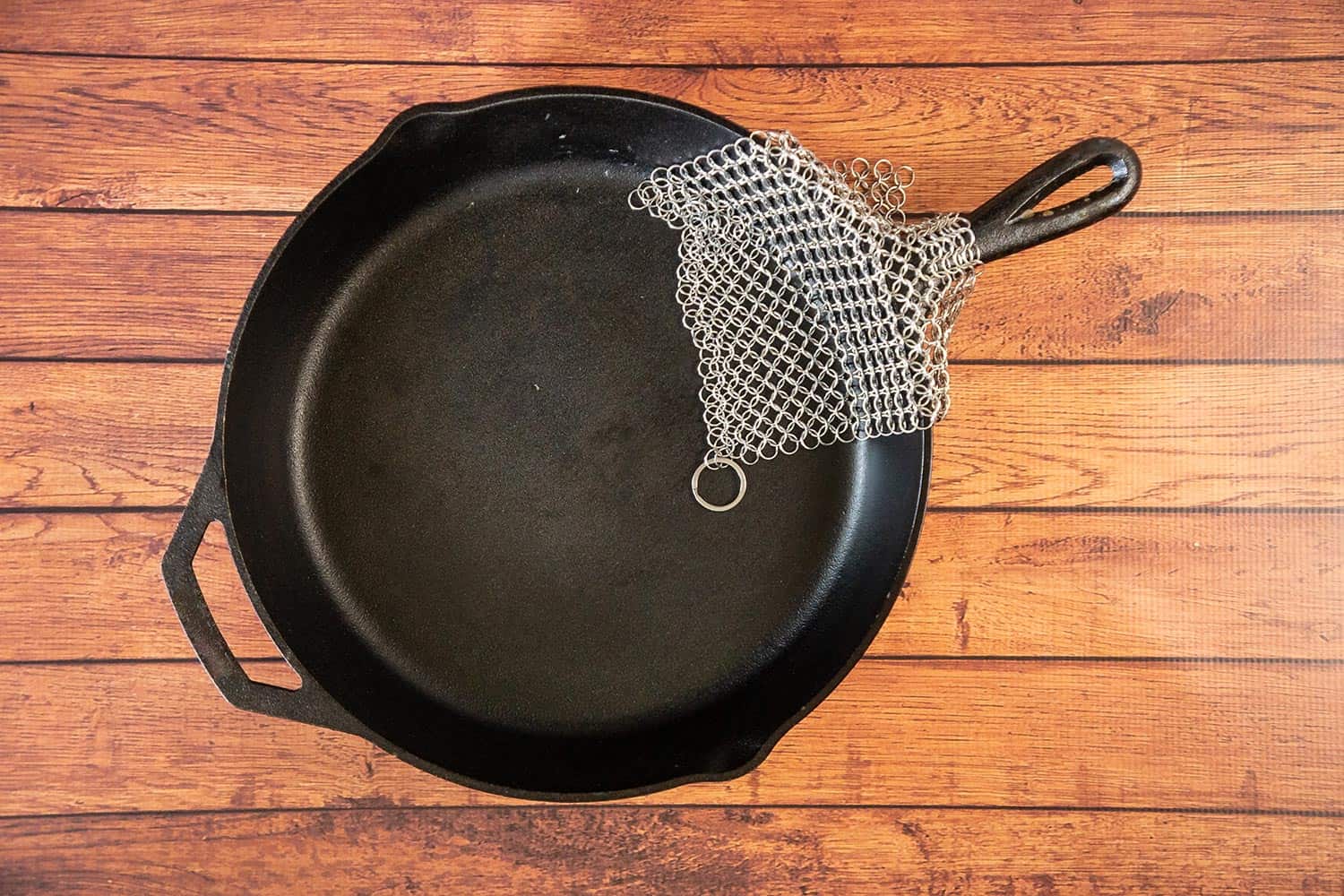 When properly seasoned, cast iron skillets have several benefits. Let's take a look at them below:

When it comes to durability, cast iron is one of the best cooking materials. It can withstand high temperatures, and it is virtually indestructible. As a result, it can be used for decades when cared for properly.

That's part of the reason you see outdoor enthusiasts and campers use cast iron skillets.

When properly seasoned, cast iron skillets are also nonstick. This is a great feature for cooking because it means that you don't have to use any oils or fats when cooking compared to other types of cookware.

Cast iron also holds heat well. This is another feature that makes it great for cooking. The skillet will stay warm long after you have taken it off the stove.

A tasty benefit to cast iron is that it gets more flavor after each use. This is due to the seasoning that is built up on the skillet over time.

Another benefit to cast iron is that it doesn't leach chemicals into your food. This is a big plus for people who are looking to avoid unhealthy chemicals in their food.

Cast iron is also easy to clean. All you need is hot water and a scrub brush. As mentioned earlier, when camping, you can simply use a bit of water and a paper towel to clean it.

Cast iron is also affordable. You can find a quality skillet for around $25. This is a fraction of the cost of other types of cookware. Also, when you compare its lifespan to other cookware, it makes it a bargain.

When properly seasoned, cast iron will give you the nonstick surface, durability, and flavors that you are looking for in a skillet. In addition, they are affordable and easy to clean, making them an attractive option for anyone. Just be sure to season it properly before use!

Should You Season Staub Cast Iron?

What Oil Is Best For Cast Iron Cooking?

How Often Do You Season A Cast Iron Pan?

How Long To Cook Rice In A Pot

Does A Wok Work On An Electric Stove?

Can Le Creuset Ceramic Go On The Stove?