Cooking over a campfire? Stove-top cooking? Baking in the oven? Cast iron can accommodate a vast array of ways to cook and create perfection under any of these circumstances. Finding the right oil can keep cast iron seasoned. We have researched the numerous options on the market for you so that you can make an informed decision about cooking oil for you and your household.

Cast iron cooking provides many menu options, and the oil used while cooking should do the same. Important considerations for which oil to use include smoking point, flavor, perpetual seasoning, and easy clean-up. Based on these factors, olive oil, canola oil, avocado oil, or vegetable oil are some of the most versatile answers for your kitchen.

There are many choices of oil from standbys like vegetable and olive to avocado or sunflower oil, or even vegetable shortening. Each of these has properties that complement cast iron cooking, but some supersede the rest. 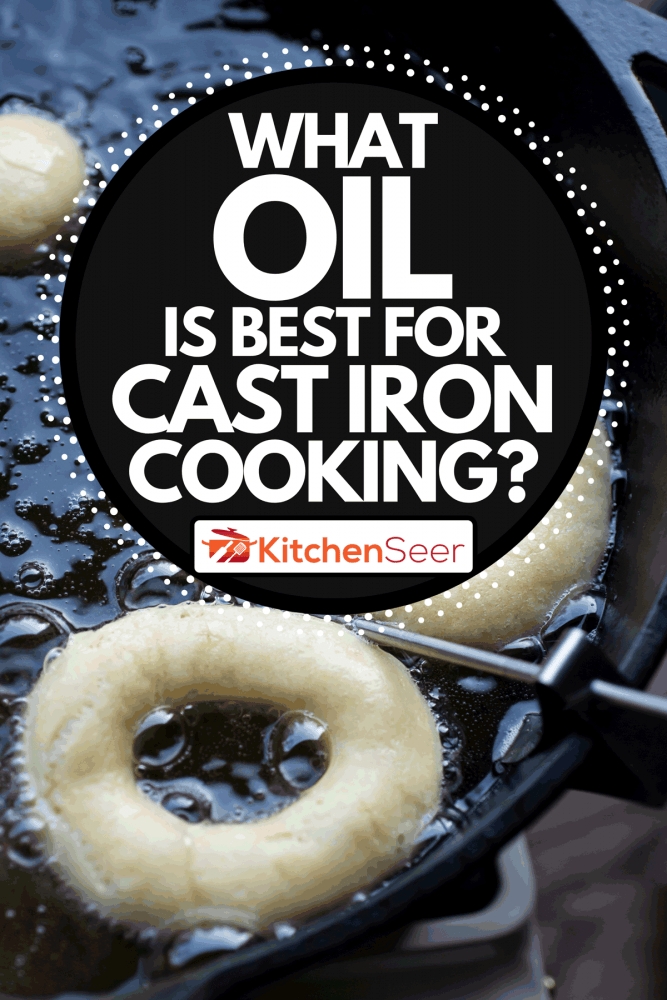 The smoking point of cast iron is a point of no return. It means that the oil has changed from a cooking base to burning in the bottom of the pan. Burning becomes a problem because it changes the oil composition and releases things called free radicals or toxic fumes. No one wants to inhale or cook food with something that has entered the toxic zone.

In order to keep you and the food you are putting into your body safe, choose an oil that matches the temperature zone used for cooking. Extra-virgin olive oil has a relatively low smoke point, around 375 degrees. However, light or refined olive oil's smoke point is around 465 degrees. Avocado oil has the most tolerant smoke point at 520 degrees.

Depending on the dish, it may depend on the choice of oil for the meal. Asian cuisine may require peanut or sesame oil to imbue a certain palate. However, sometimes a more neutral flavor is called for. Oils like soybean, canola, sunflower, or refined olive are all known for their neutral flavors.

Clean-up the kitchen with ease after cooking with cast iron. Wiping out the skillet with a clean cloth or paper towel is the first step. Afterwards, rinse with water and a little bit of vegetable-based soap for the truly tough and stuck-on spots.

What oil is best for cooking?

Based on the versatility of cast iron, the recipes that can be created in it, and the general need for a neutral flavor palate, as well as consideration to the smoke point of various oils; recommendations for the best cooking oils in cast iron include avocado, refined olive oil, canola oil, or vegetable oil.

Avocado oil has the highest smoke point, which means it can withstand the most heat and still retain all of the nutrients our bodies require from oil. This allows for whatever cuisine and temperature you may require for your recipe. This oil has a neutral flavor palate and is versatile for sautéing, searing, and salad dressings. This is not the oil for baking, frying, or roasting.

Refined or light olive oil is the most dynamic and healthy oil that you can use. It has a significantly higher smoke point at 465 degrees than extra-virgin olive oil at 375 degrees. Also, this oil can be used from sautéing to roasting or even baking. It has a neutral flavor palate, and clean-up will be a cinch.

Canola oil has a high smoke point of 425 degrees and can be used in any number of ways, just like refined olive oil. It took has a neutral flavor palate.

Lastly, vegetable oil is a well-rounded oil that can withstand 400 degrees while cooking. Its uses vary as well from baking to sautéing to searing. The health benefits of vegetable oil may be questionable because it is not made of the monounsaturated fats or good cholesterol, found in olive oil or sunflower oil. However, its use in the frying pan is effective.

What is cast iron good for cooking?

Cast iron cooks everything. When camping, take the cast iron along, and with a little food prep, you can have a delicious supper over the campfire. You can even have cake for dessert. In a cast iron, heat conducts in an even layer throughout the whole pan. It stays warm afterward until leftovers are put away, and the clean-up is quick and straightforward.

When the pan is new, some of the best foods to cook in the first few recipes include meats with high fat content. Roasting vegetables in oil tastes wonderful and helps season the pan as well. After the pan is seasoned, literally anything can be made and made well in cast iron. The pans are also usually large enough that cooking for a crowd will not prove to be a problem.

Baking in a well-seasoned cast-iron pan produces wonderful results. Recipes may include anything from pretzel bread to dump cakes to English muffins or even pizza. For baking clean-up, keep a scraper handy to help with the tough patches. More information can be found on baking with cast iron here.

Can you cook with butter in cast iron?

Cooking with butter in a cast-iron skillet or pot works very well. However, because of the low smoke point of butter, the important factor is to have your skillet pre-seasoned. Pancakes in butter over a cast-iron skillet come out light and fluffy. A pat of butter before scrambling or poaching eggs will make the egg slide from the pan.

How do you keep food from sticking to cast iron?

Keep food from sticking to cast iron by keeping it seasoned. If used often, re-seasoning may need to take place a few times over the course of the year. Also, when cooking, make sure to add oil or butter to the pan in an appropriate amount. Many recipes call for one to two tablespoons of oil because of the nutrients it provides for our bodies.

How often should you season cast iron skillet?

Perpetual seasoning of cast iron will keep everything in check. Seasoning cast iron means that oil has been baked into the pan, creating a surface that food will easily slide out of. As cast iron gets used over time, seasoning creates a darker surface that becomes effortless for cooking and cleaning.

If seasoning cast iron at home, use an oil with a high smoke point to coat the pan. Put a baking sheet or another dish larger than the pan on the rack below it in the oven. Then, take the cast iron, turn it over on the rack, and bake it in the oven for one hour. Cast iron holds up to heat, so it has a significant range. Heat to at least 350 degrees, but up to 500 degrees for seasoning. Once the hour is over, turn the oven off and allow the cast iron to cool on its own before removing it. Over time, this process creates an easier work surface. For more information on how often to season cast iron, click here.

What oil is best for seasoning?

The best oil for seasoning needs a high smoke point. While multiple types of oil can work, some of the best include avocado, canola, or vegetable. Olive oil is a great oil to use on food, but unless it is the light or refined kind, its smoke point is comparatively low. Avocado oil's smoke point is around 520, the highest. Canola and vegetable oil have smoke points around 425-450 degrees.

What should you not cook in cast iron?

Cast iron properly seasoned over time works wonders with any recipe. If the cast iron is new or newly seasoned, consider avoiding or reducing the number of acidic foods that may make it difficult to retain that shiny, smooth cast iron surface. Acidic foods are things like tomatoes, citrus, or vinegar.

If the cast iron recently came home from the store, or it hasn't been seasoned multiple times, consider waiting to cook eggs or fish. Cast iron pans do great with these types of foods, but not until after some seasoning has taken place.

Choosing a cooking oil based on smoke point and flavor will enhance any meal made in a cast-iron pan. You'll have easy clean-up using cast iron. Keeping the pan well seasoned will ensure a non-stick surface for your stovetop and baking needs.

Should You Cook Steak In Butter Or Oil?

How To Substitute Buttermilk For Heavy Cream?

Does Almond Butter Need To Be Refrigerated? [Before And After Opening]