At this point, it's nearly impossible to be unfamiliar with the recommendation of seasoning a cast iron. However, how long should it take to complete? Does it change depending on where you're seasoning it? If that's your concern, we've researched the issue to provide some answers.

The time you need to wait seems to be consistently about 30 minutes to an hour. For example, cast iron seasoned with canola oil will take nearly an hour to finish at 450-500 degrees F in the oven. Stovetop seasoning will take a bit less time, but it involves more effort.

Seasoning a cast iron is a simple job, but it helps to know what exactly you're doing. There's a reason why many manufacturers recommend heating cast iron at high temperatures for long periods; the main focus is polymerization. If you'd like to learn more on this topic, keep reading.

The Science Behind Seasoning Cast Iron

Seasoning cast iron sounds simple in practice. All you need is time and some oil. It involves applying the oil all over the handles, sides, cooking surface, and bottom. Once the oil is on, you leave it in the oven for however long it should take. 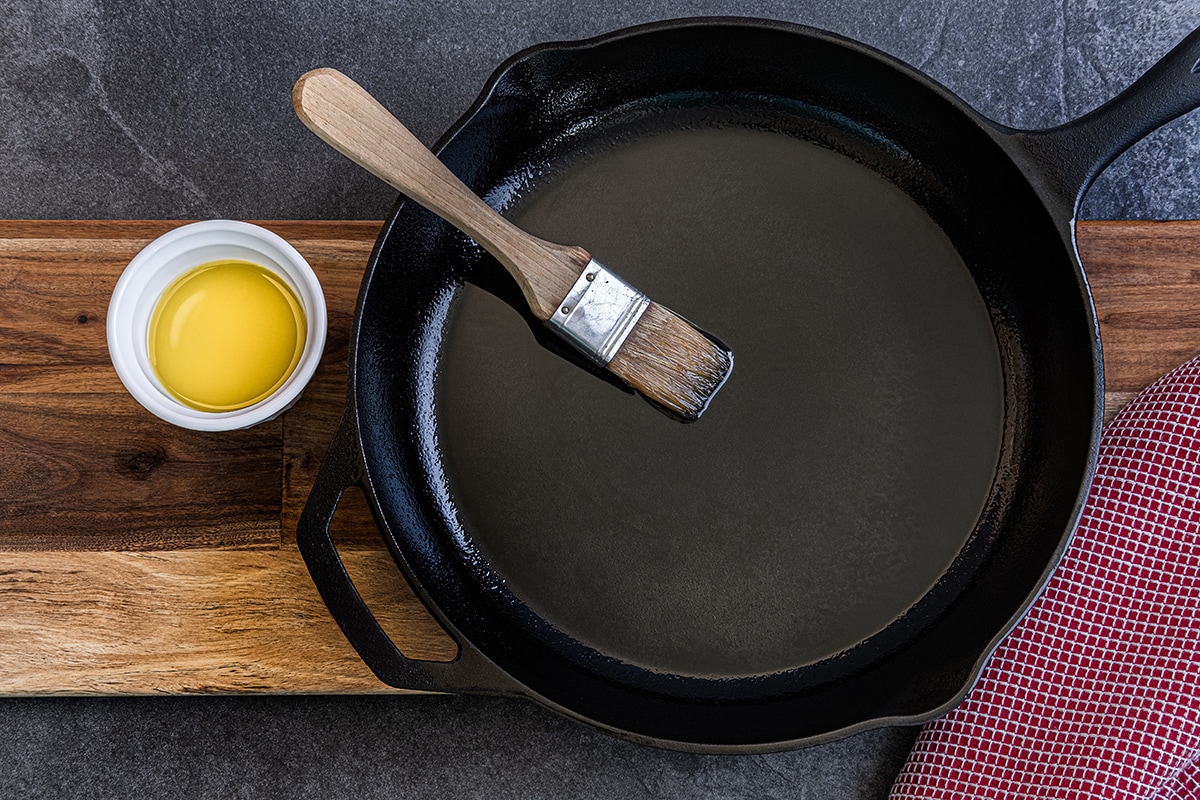 That last part is what leads you here. How long does it take to season cast iron? Of course, you could always follow the instructions of the cast iron manufacturer. One of the more well-known brands is Lodge Cast Iron.

Lodge Cast Iron recommends baking their cast iron cookware for an hour at 450-500 degrees Fahrenheit. We could follow this advice, but we have more factors to consider.

The Oil You Use Matters 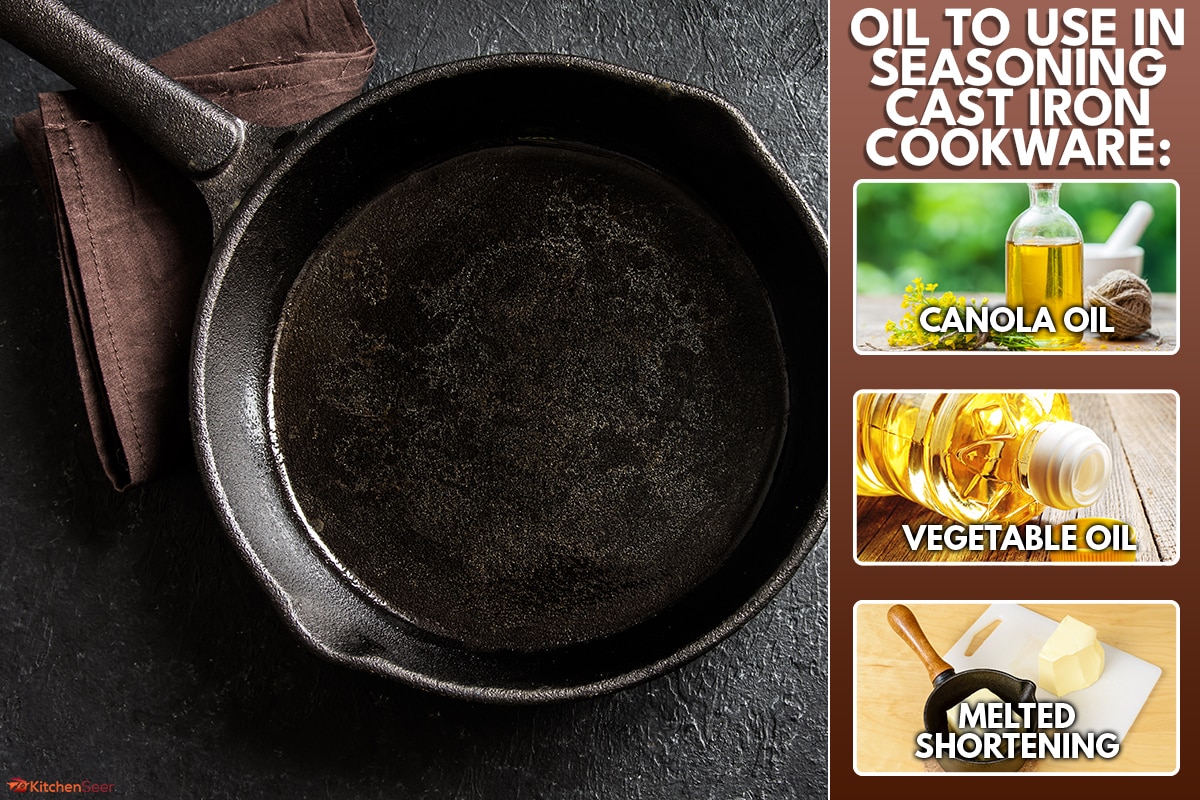 More specifically, we should consider the oil you are using to season the cast iron cookware. If you try following the general advice above, the seasoning process might not end well. Luckily, Lodge Cast Iron does offer an oil recommendation.

Click here to see this seasoning spray on Amazon.

You can purchase their seasoning spray, but that's not necessary. Their spray is 100% canola oil. So, most homes should already have this lying around. However, if you don't have canola oil, you may also use vegetable oil or melted shortening.

Now it leads us to the question—why does Lodge recommend these oils for seasoning?

Lodge Cast Iron states: "All cooking oils and fats can be used for seasoning cast iron but based on availability, affordability, effectiveness, and having a high smoke point, Lodge recommends vegetable oil, melted shortening, or canola oil..." 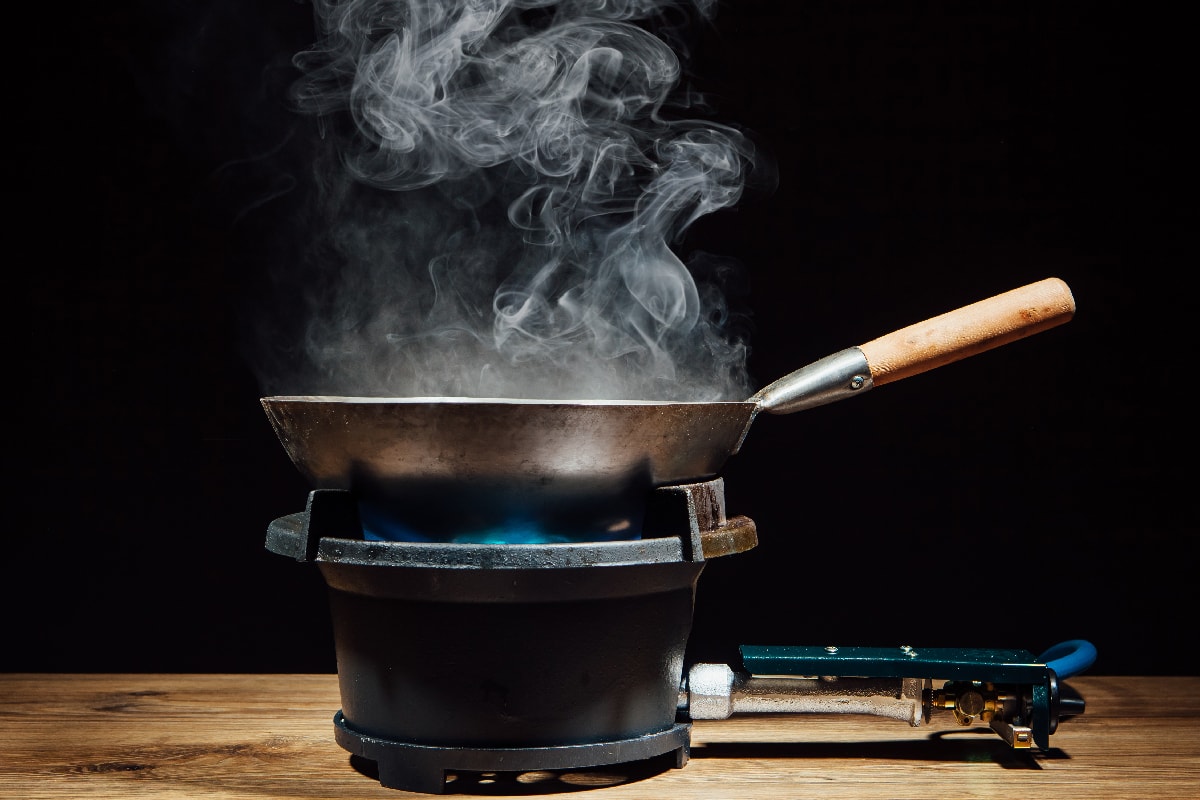 The most crucial part of the quote above is the mention of the smoke point. As the name implies, the smoke point tells us the temperature it takes to make an oil smoke. However, why should you care about this?

It's important to consider because we're focusing on reaching the oil's smoke point. When oil begins to smoke, a chemical reaction called polymerization occurs. In simple terms, it's the process where the oil changes from a wet liquid into a slick, hardened surface.

Now we know the reasoning behind the recommendations Lodge makes. At this point, you could follow along without a problem. Let's go over the seasoning process. We'll start with the oven method first. 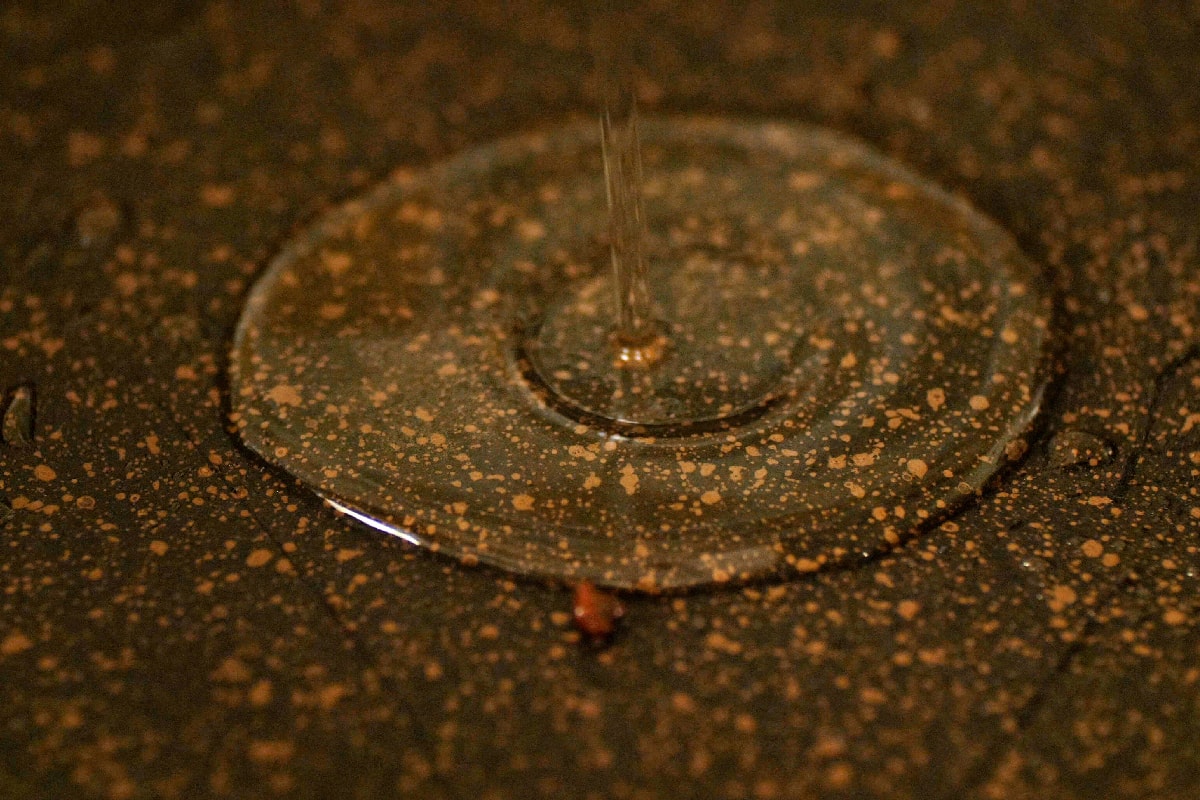 Once you finish applying the oil, insert the cast iron cookware into the oven face down. At the bottom rack, underneath the cast iron, place a baking sheet to catch excess oil—just in case.

Here's where seasoning times might differ. If you've preheated the oven to 450 degrees F, it should take about 30 minutes to polymerize.

If you didn't, the oven and oil on the cast iron need time to heat up. So, you'll need to add half an hour. In other words, it will take an hour for the oil to polymerize.

However, it isn't too big of a difference. The oil should be heated just at or above the smoke point to polymerize. If you're working with temperatures below 450-500 degrees F, the cast iron might need more time in the oven.

Crisco shortening is also a good option since it has a smoke point of 360 degrees F. However, others claim it has a higher smoke point nowadays because it uses soybean and palm oil.

Click here to see this Crisco shortening on Amazon.

It may take about an hour to an hour and a half to season cast iron cookware at 400 degrees F.

Once you start using temperatures below 400 degrees F, the little details become more significant. More specifically, you want to apply a fine, thin layer of oil to the cast iron cookware. You may use any oil you'd like here.

However, you may be thinking—isn't this temperature too low to reach any oil's smoke point? It is, but any oil should be able to polymerize as long as the layer is extremely thin.

In addition, it will need enough time in the oven. Therefore, you'll want to buff the cast iron cookware as much as possible.

Buff it until it looks dry; it might look like you've removed all the oil, but there's still some on there. At this point, place the cast iron cookware in the oven for 1-2 hours.

You'll have to repeat the process several times to get good coverage.

Seasoning On A Stovetop

If you don't have a large oven, you could also season cast iron cookware on a stovetop. It takes less time but more effort; the time it takes to finish depends on how fast you work.

Before starting the process, clean your cast iron cookware. Once it's dry, place it on the burner on medium heat for about 10 minutes. We're focusing on getting the cast iron hot.

Once it's hot, pour some oil on the cooking surface. Remember, you don't want to use too much. Then, take a cloth and rub the oil over the surface, sides, and handle.

Be careful as you're doing this; the cast iron will be hot to hold with your bare hands. Use oven mitts or something similar to hold the cookware.

Click here to see this handle holder on Amazon.

After applying the oil to the cast iron, buff it with a fresh and clean cloth; buff (polish) it until it appears dry. Then, let the cast iron cookware continue heating up.

During this process, smoke will appear. Once it stops smoking, you'll know the job is over. If you need a demonstration, here's a YouTube video to help:

Why Is Cast Iron Not Black After Seasoning?

There are countless examples online of what seasoned cast iron cookware should be like; it usually gains a black finish. However, what if yours doesn't turn out the same?

You might not have to worry if your cast iron doesn't gain a black finish. As long as the surface is dry and not sticky, it should become darker over time. One cast iron manufacturer states: "Newly seasoned cast iron may have a brownish tint to it. It's not rust, it's just the initial patina baking in."

The cast iron should turn darker as you use it. However, there's a faster way to turn it darker. If you'd like, you can apply a few more coatings.

With these new coatings, you'll want to use a higher temperature in the oven. Temperatures around 450-500 degrees Fahrenheit guarantee the cast iron will come out with a black finish.

What Happens if You Over-Season Cast Iron? 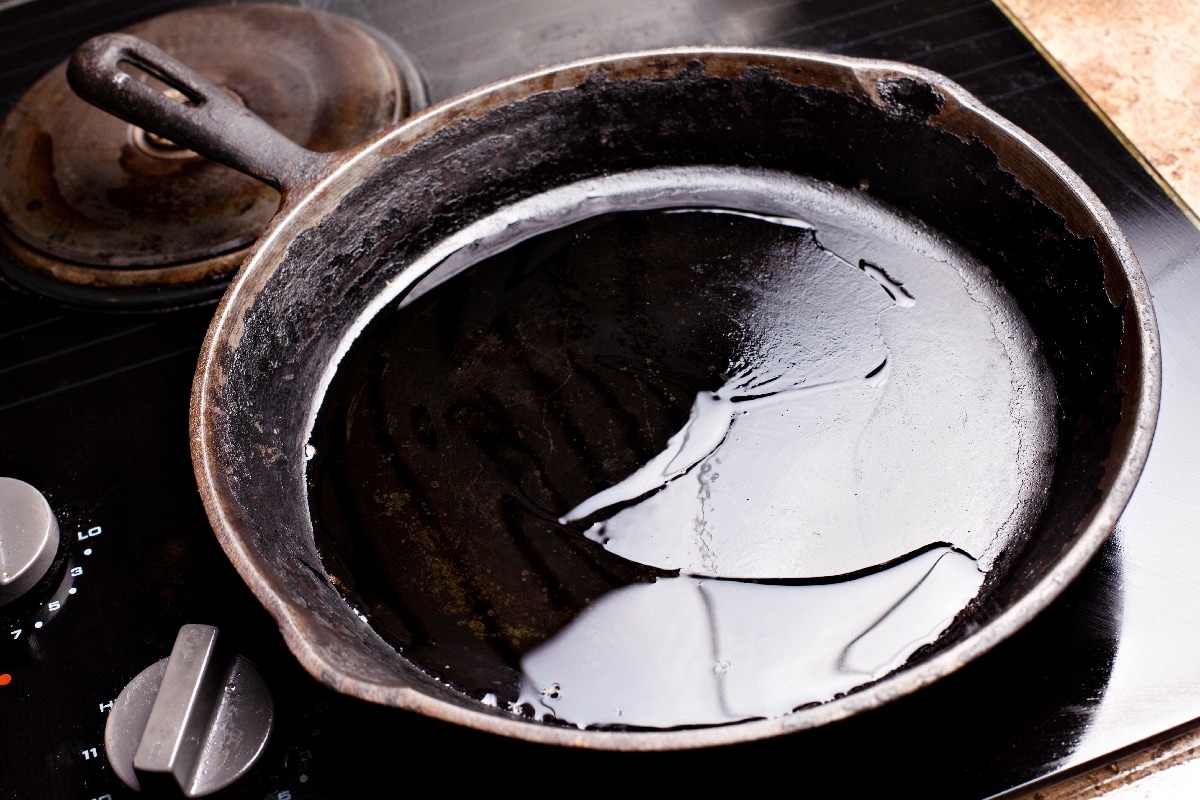 If you're focusing on all the details, you'll notice that many people recommend avoiding using too much oil. So, we can assume there's a possibility of over-seasoning cast iron.

It raises the question—why should you avoid using too much oil? After all, the oil turns into a plastic-like film at high temperatures. With this information in mind, you might get the idea that more oil means a thicker layer of protection.

However, that's not the case. Using too much oil usually makes the cast iron cookware sticky. Making a mistake like this will require more effort to remove the sticky mess and season the cookware again.

There are so many recommendations online—it's hard to keep track. However, one hour of seasoning time seems to be the consensus. If you're seasoning the cast iron cookware at a lower temperature, that timeframe becomes an hour longer. We hope this is informative enough to clear up any confusion.

Before you go, do you have other cast iron concerns? Are you wondering if it's worth seasoning the bottom of it? For more information, check out:

Do You Season The Outside Of A Cast Iron Skillet?

After seasoning the cast iron, you'll probably want to compare the results. This way, you can get a good grasp of what's going on. To learn more, check out:

How To Tell If Cast Iron Is Seasoned

Are Casserole Dishes Dishwasher Safe? [Here’s Which Ones Are]

How To Keep A Casserole Dish Warm [7 Effective Ways!]

6 Of The Best Ovenproof Skillets