A poorly seasoned cast iron pan will often feel and look sticky, it may sometimes have rust or it is flaking. If your cast iron pan has any of these qualities, you should strip off the old seasoning and re-season your pan correctly. It is a long and laborious process but doing this will make your pans last longer. 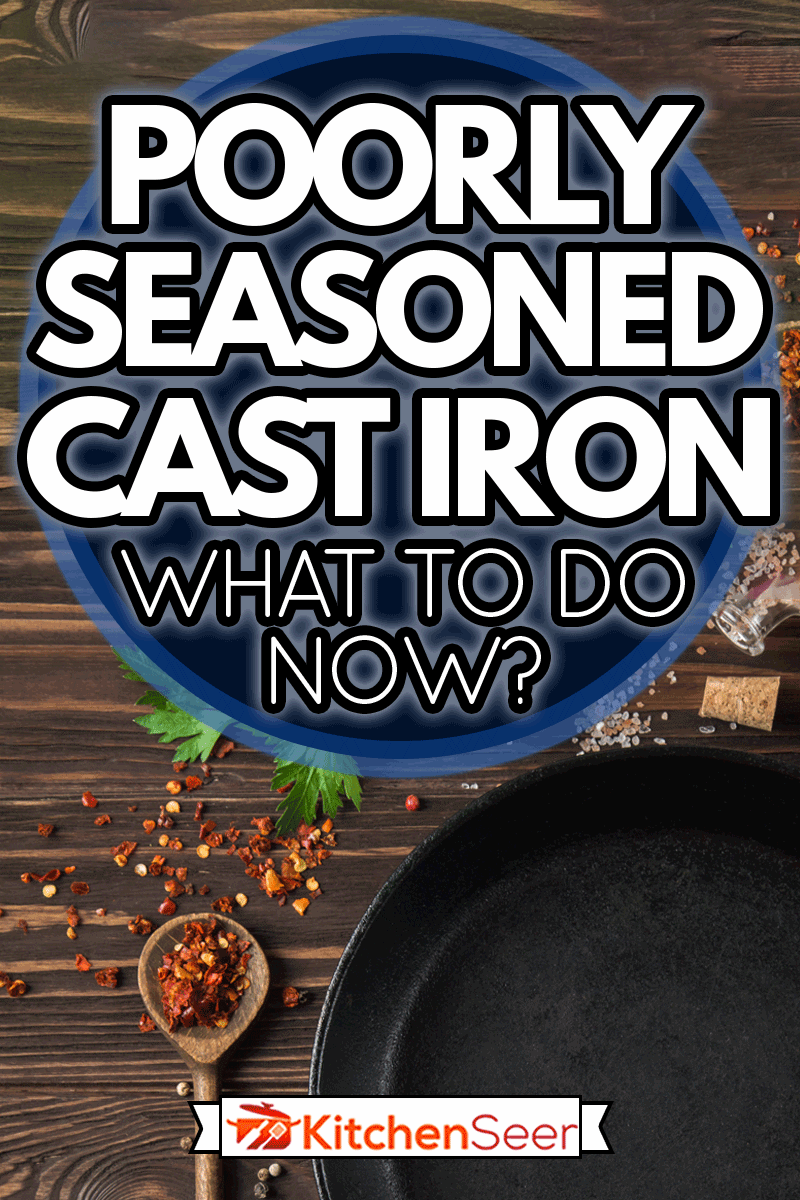 What Do I Do With Uneven Seasoning Cast Iron? 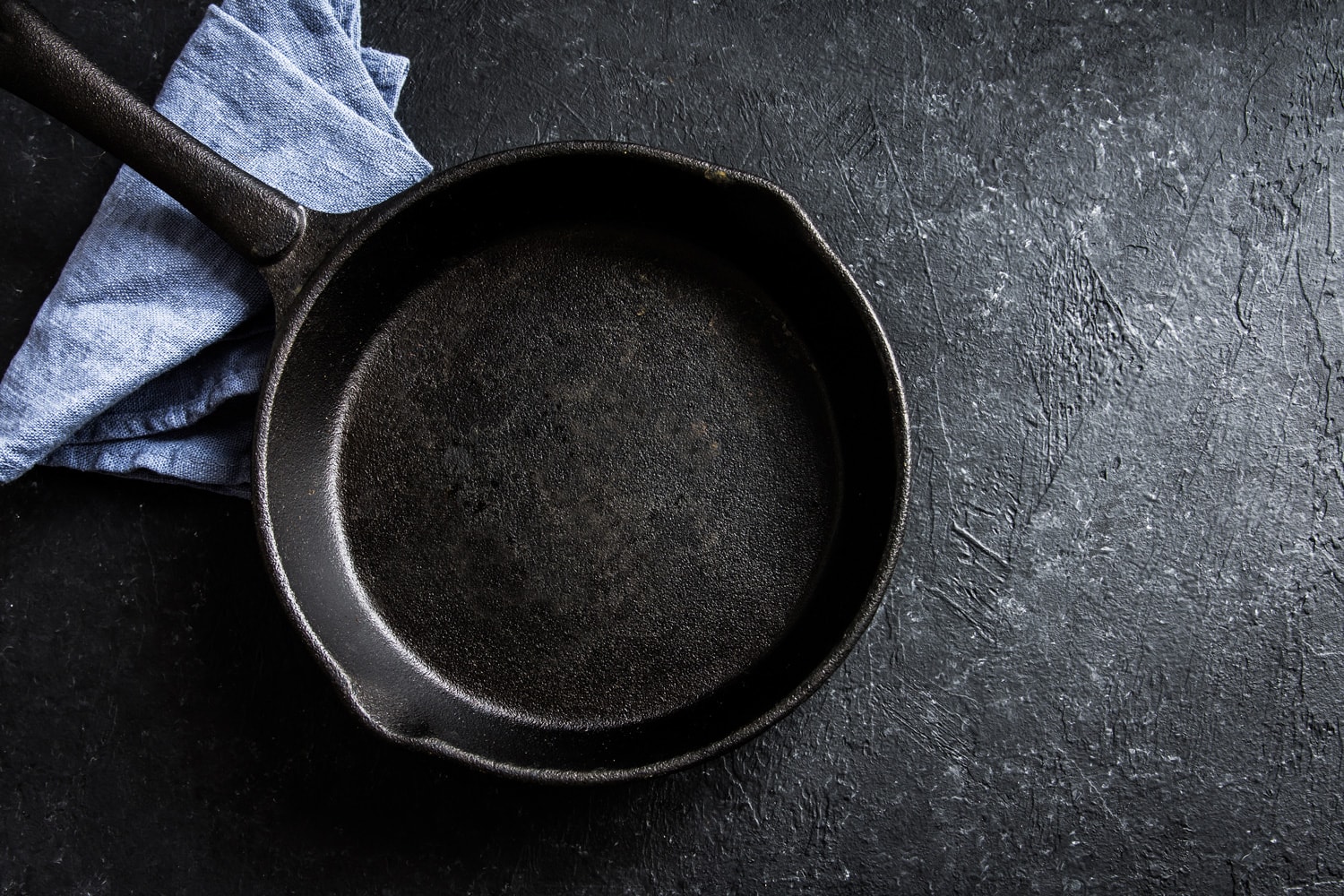 However, one thing that cast iron owners should know is that its durability comes from the way it is maintained. Cast iron cookware needs to be seasoned all the time. If a cast iron pan is not continuously seasoned every time it is used, corrosion will occur and wear down on the pan's metal.

If you have cast iron cookware, you're probably wondering if it's properly seasoned. A lot of people think that as long as the pan is black, shiny, and smooth, it is already well-seasoned. Poorly seasoned cast iron pans should be restored by re-seasoning them properly.

Why Is My Pan Sticky?

Some cast iron pans feel sticky to the touch when stored. This stickiness is often caused by using too much oil on the cast iron pan, leaving it to pool in a layer over the surface. It can also be caused by not baking the pan long enough in the oven, or the temperature in the oven isn't hot enough.

To prevent this issue, your cast iron pans should be heated to the oil's smoke point. It should be baked long enough to polymerize the oil and make a shiny, non-sticky surface.

Remember not to put too much oil on the pan because a thick layer of oil will take too long for it to be polymerized; your pan will become sticky. When applying the oil to your cast iron pan, wipe off the excess until it looks like it's gone. The oil layer should be thin, and you can bake it in a 450-500°F oven for an hour.

What Do I Do With Rusty or Flaky Pans?

If your cast iron pan has rust on its surface or it is starting to flake off, this is typically a sign that the seasoning of the pan has started to wear off. This usually happens if you don't regularly season the cast iron pan. The seasoned layer gets washed off every time it is cleaned.

To restore your cast iron pans having rust or flaking issues, here are some steps you should follow.

How to Restore Rusty or Flaking Cast Iron Pans 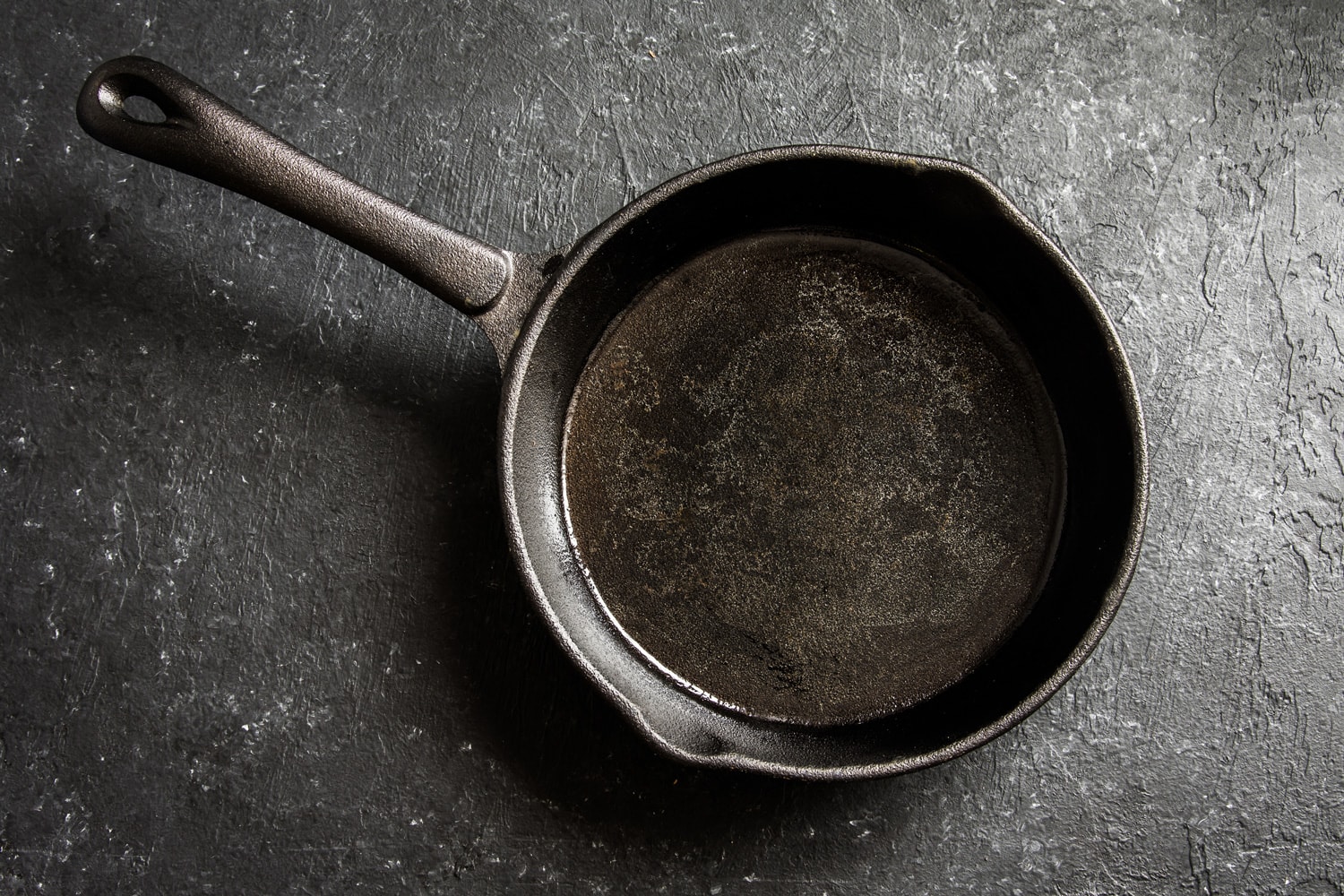 Best Oils To Use For Seasoning Cast Iron 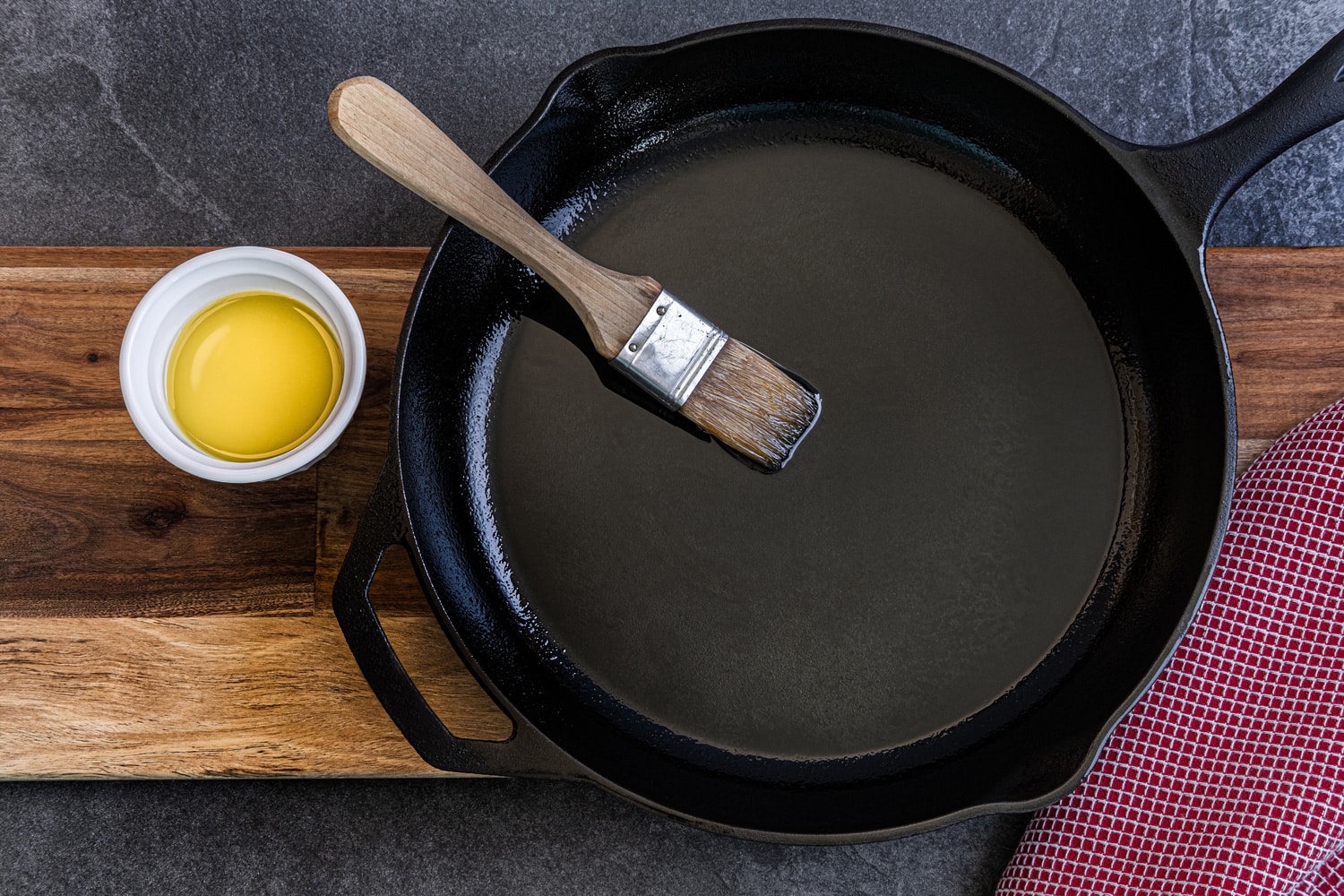 Now that you've decided to strip and re-season your cast iron pan, you're probably wondering what kind of oil should be used to give it that nice, sleek layer to season your pan. Oil is needed to create that non-stick layer on the pan, and this can be done by letting it polymerize through baking in high heat.

Here are some suggested oils you can use to season your cast iron pans:

Grapeseed oil has a smoke point of about 420°F and is flavor neutral. A lot of people like using grapeseed oil for seasoning their pans because mild flavors blend well with it, and it is generally inexpensive.

Check out this grapeseed oil on Amazon.

Canola oil is very common. It is easy to acquire, and this oil has a smoke point of 425°F. The taste will not compete with the flavor of the food that you will cook, making it a great choice for seasoning.

However, canola oil isn't the strongest oil for seasoning cast iron because it tends to break down easily. You will need to re-season your cast iron pans more than usual.

Get this canola oil on Amazon.

Similar to canola oil, vegetable oil is easy to get. It has a smoke point of 400°F. It is very inexpensive and flavor neutral, but a caveat that it shares with canola is its weak seasoning layer. Fortunately, you can build up your seasoning layers as you go along and keep using your cast iron pan.

Get this vegetable oil on Amazon.

A lot of cast iron enthusiasts like using avocado oil to season their pans because it gives them a very tough, durable seasoning for their cast iron pans. Avocado oil has a very high smoke point—520°F, so it might take some time before it completely dries out in the oven.

While it can give your cast iron pan that high-quality seasoning, you'll have to shell out quite a bit of money to do so because avocado oil can be quite expensive.

See this avocado oil on Amazon. 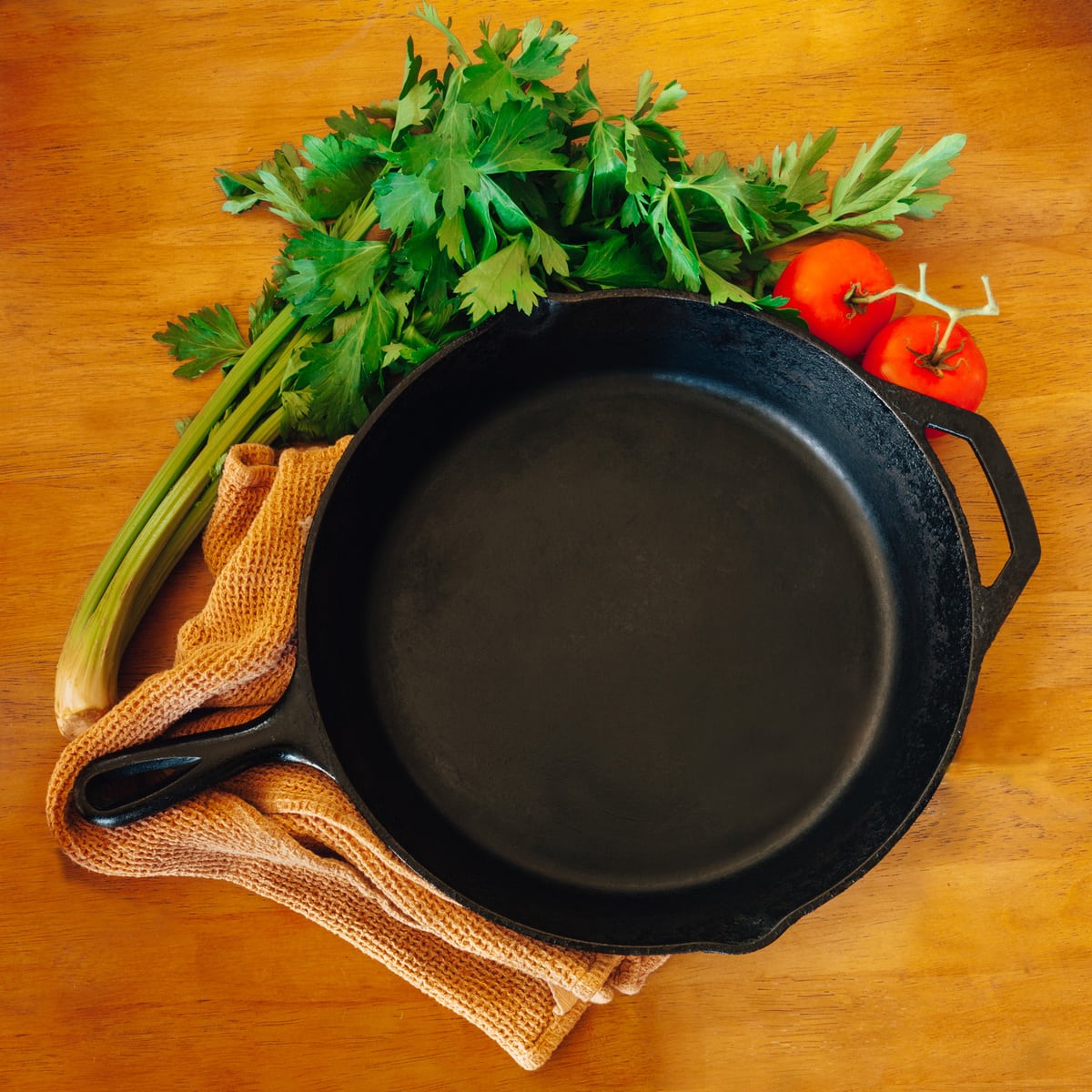 A cast iron pan is one of the toughest, sturdiest pieces of cookware you will ever have. To do this, you should check that the pan is well-seasoned and it is stored properly. A poorly seasoned cast iron pan will give you more trouble than what it is worth, so it would be best to always check and restore your cast iron cookware as soon as possible.

Checking out more information about using cast iron pans? We've got a couple of articles that you will enjoy:

Left An Empty Cast Iron Pan On The Stove — What To Do?

Food Sticking To Cast Iron – What To Do?

Can Cuisinart Pans And Pots Go In The Oven? [Inc. The Lids]

How To Keep Pancakes From Sticking To The Pan