Sautéeing onions and peppers may seem simplistic, but some chefs claim there’s a special way to make this classic combo. A large part of this “technique” has to do with timing. According to some people, peppers and onions cook at different rates. So, should you be selective over which ingredient you add first? Do onions cook faster than peppers, or vice versa? If you want to learn more about how long it takes to cook onions and peppers, you’ve got to check out the research we’ve done on this topic.

Honestly, onions and bell peppers take roughly the same amount of time to cook. However, most chefs claim that you have more leeway with onions. For this reason, most recipes for sautéed peppers and onions put the onion in first.

If you cook the onion longer, it will develop a golden caramelization. As for bell peppers, they can get soggy if you overcook them. To avoid this scenario, it’s best to give onions a head-start and constantly monitor your bell peppers’ texture.

Making bell peppers and onions is one skill that every chef should add to their repertoire. If you’re a little rusty with your sautéeing skills, you may want to check out the info we’ve compiled on cooking these ingredients. 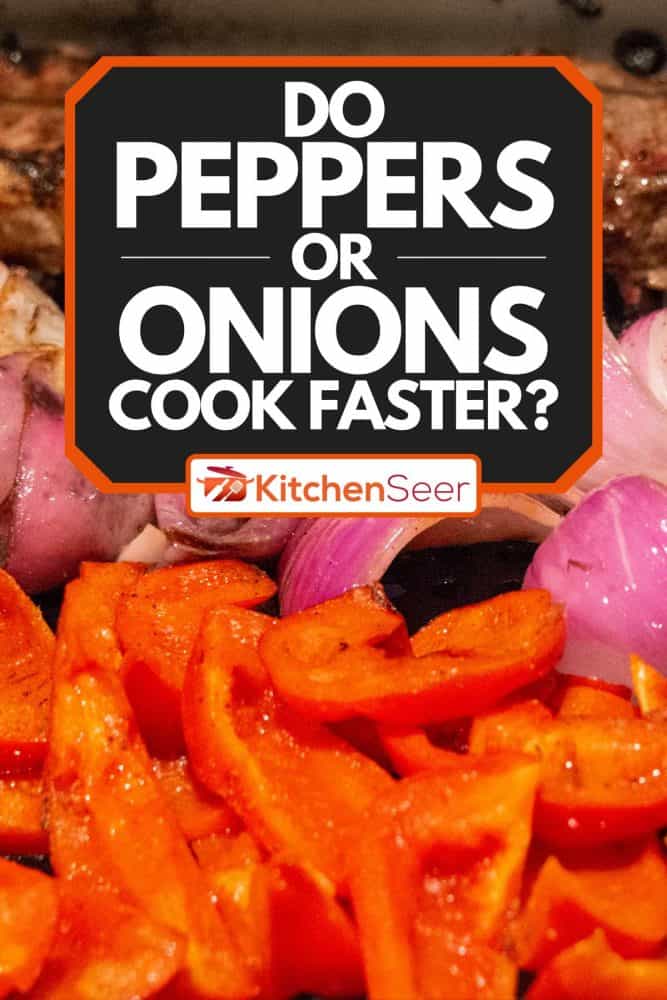 Do Onions Or Peppers Take Longer To Sauté?

Both bell peppers and onions take roughly the same time to cook. Many chefs add these ingredients to their heated pan and let them cook for about 7 - 10 minutes. For a video explanation of this method, please watch this popular YouTube video:

Although onions and peppers have roughly equivalent cooking times, you’ll run across many recipes that say to put the onions in first. The main reason people do this is that it takes longer for the onion to caramelize fully.

Also, some chefs claim it’s easy for bell peppers to get soggy the longer you leave them in the pan. People who prefer a little “bite” in their peppers should consider adding them after their onions turn translucent.

While many people prefer the onion first method, you have to adjust the timing to suit your taste preferences. For instance, if you don’t mind your onions being less than golden brown, feel free to add both ingredients first. Heck, some chefs claim they like to put peppers in the pan first to get them softer.

Everyone has a different idea on the ideal texture for sautéed peppers and onions. We’d recommend trying all three methods to see if you notice a significant taste difference.

By the way, if you want to learn an alternative way to cook onions, please check out our guide, “How To Caramelize Onions In The Oven.”

How Long Should Peppers Be Cooked For?

Choosing the ideal time to cook your bell peppers largely depends on your desired texture. However, most recipes say it’s best to cook peppers over medium-high heat for no more than 10 minutes.

As you’re cooking your peppers & onions, be sure to give them a good toss and check their texture with a fork. Most people don’t like eating soggy peppers, so be sure to taste test a few slices to ensure they have the right amount of “bite.”

Why Do You Cook Onions First? 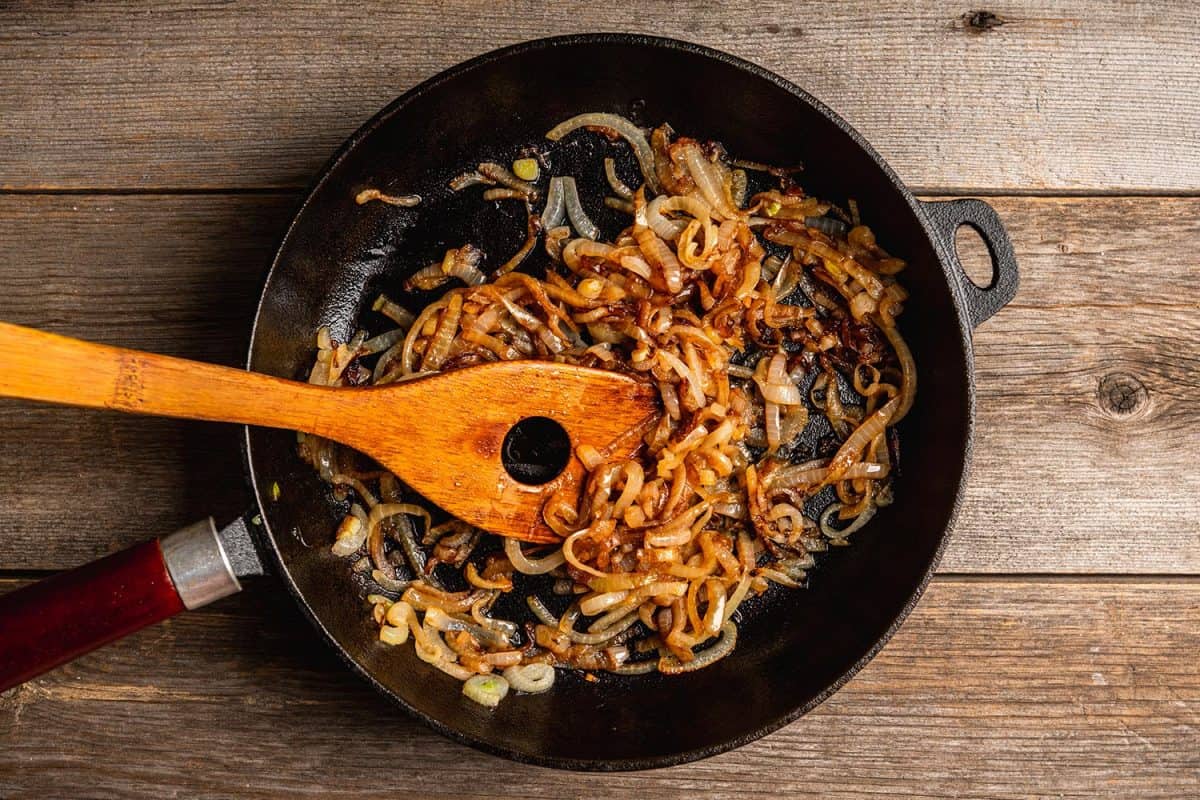 There are two reasons most chefs put onions in their hot pan before bell peppers. First, they want to get their onions nice and caramelized. It usually takes longer for an onion to reach a sweet gold brown color, so you need to put this veggie in first to give it a head start.

Secondly, many foodies aren’t concerned with cooking their bell peppers as much as caramelizing their onions. What we mean is, people, don’t mind if their bell peppers still have a bit of “crunch” when they’re served. Chefs also want to avoid bell peppers getting too soggy, which could quickly happen if you leave them in the pan too long.

Please remember, you don’t need to put onions in your hot pan first when making onions and bell peppers. Try various methods of preparing this dish until you find what works best for your tastebuds.

How Do You Sauté Onions And Peppers Without Oil? 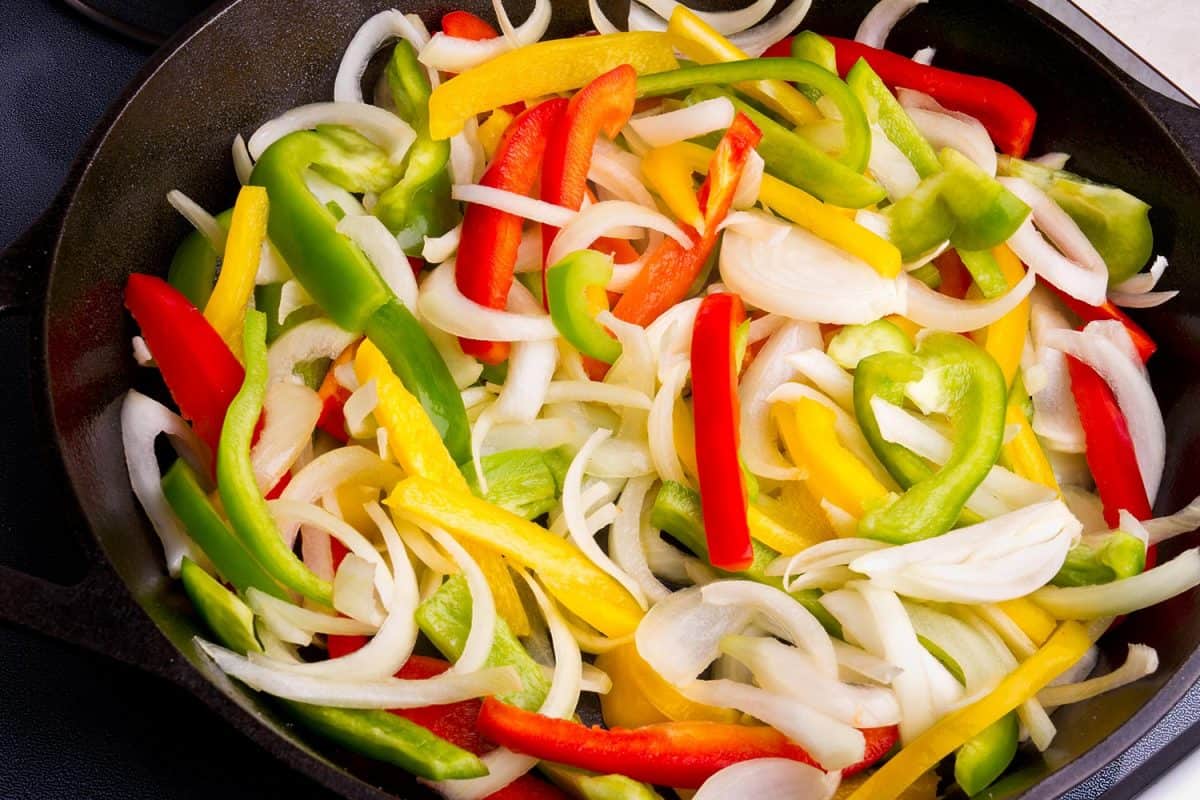 Most recipes call for sautéeing onions and peppers in oil. However, if you don’t like using oil (or don’t have any at home), you could use many substitutes to give your peppers and onions a nice sear.

Arguably, the easiest way to cook peppers and onions without oil is to add a few tablespoons of water to your pan. Just be sure to monitor your pan as the water evaporates, as you may need to add more.

In addition to water, you could add ingredients like chicken broth, vegetable broth, or even beef broth to add some flavor. Other popular ways to add depth to your onions and peppers include soy sauce, balsamic vinegar, Tamari, and sherry.

If you’re not opposed to eating butter, you could use it in your sautéed onions and bell peppers. However, for those who are more health-conscious, be sure to look into clarified ghee. Since ghee is a purified form of butter, it tends to have more health benefits like a high concentration of omega-3 fatty acids.

If you need more tips on cooking bell peppers and onions without oil, be sure to check out this video:

Do You Have To Cook Peppers Before Eating? 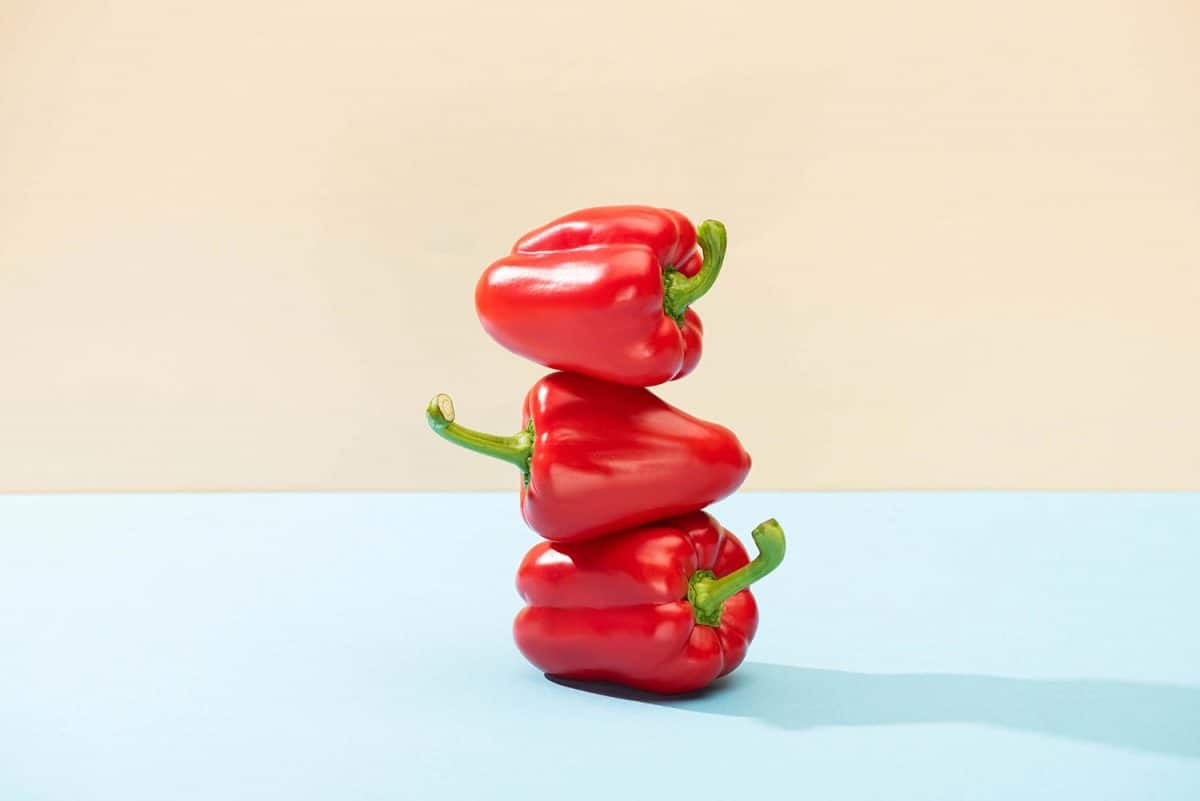 It’s safe to eat bell peppers without cooking them. Raw bell peppers have higher concentrations of vitamins and minerals than cooked bell peppers. This is especially the case for red bell peppers, which have the highest amount of beneficial compounds.

While most recipes for peppers and onions taste better with tender peppers, there’s nothing wrong with eating raw bell peppers. Just be sure to always wash your bell peppers thoroughly before eating or cooking them.

If you’re a fan of eating bell peppers, then you may want to invest in a handy “pepper corer.” Yes, some devices help you get rid of bell pepper seeds without making a mess!

What Onion Should You Use With Bell Peppers? 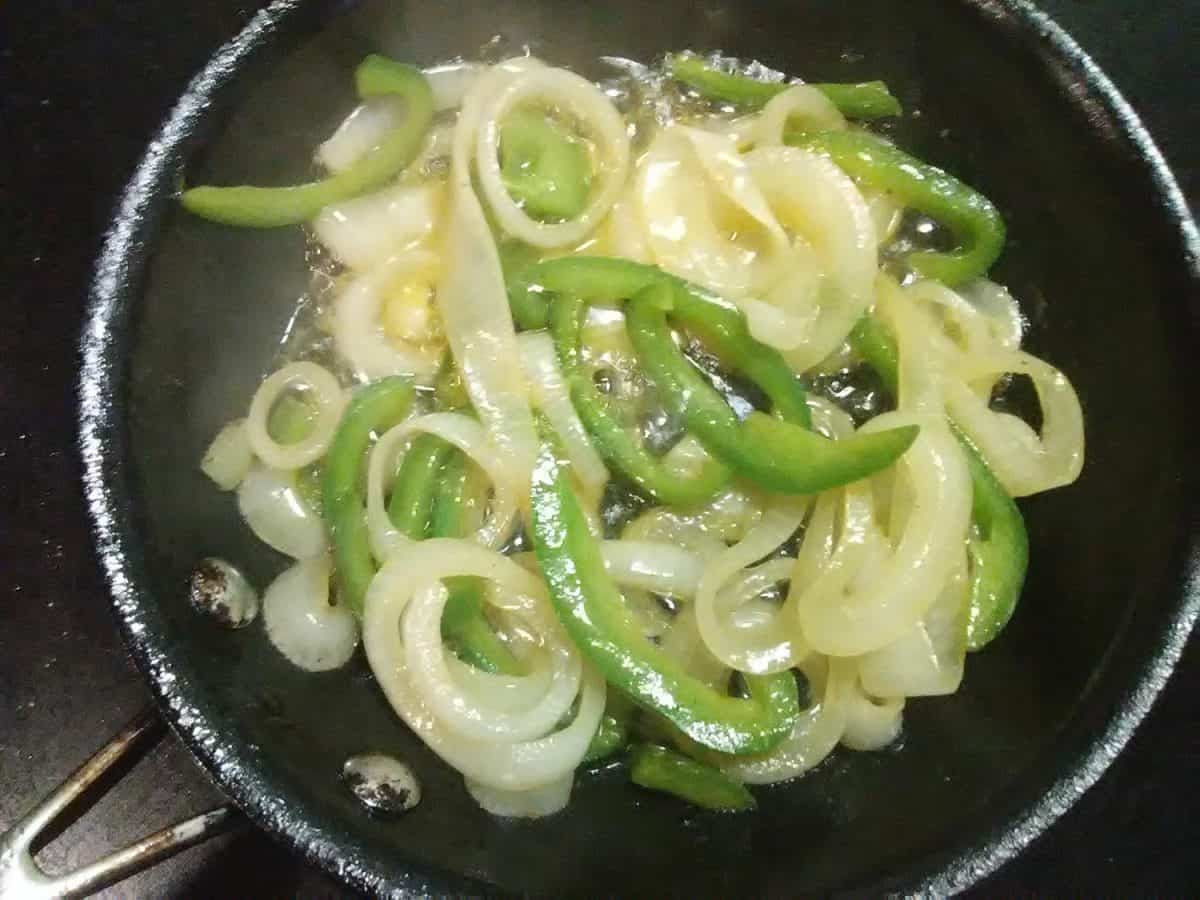 You can use any onion variety you want when sautéeing with bell peppers. However, most recipes call for either yellow or red cultivars. Interestingly, a few chefs recommend using both red and yellow onions to provide subtle contrasting flavors.

Be sure to experiment with different combinations of onions until you find what works best for your taste preferences.

FYI: You could learn more about how red onions differ from other varieties in our post “Can You Cook with Red Onions?”

How Do You Sauté Peppers And Onions For Sausage? 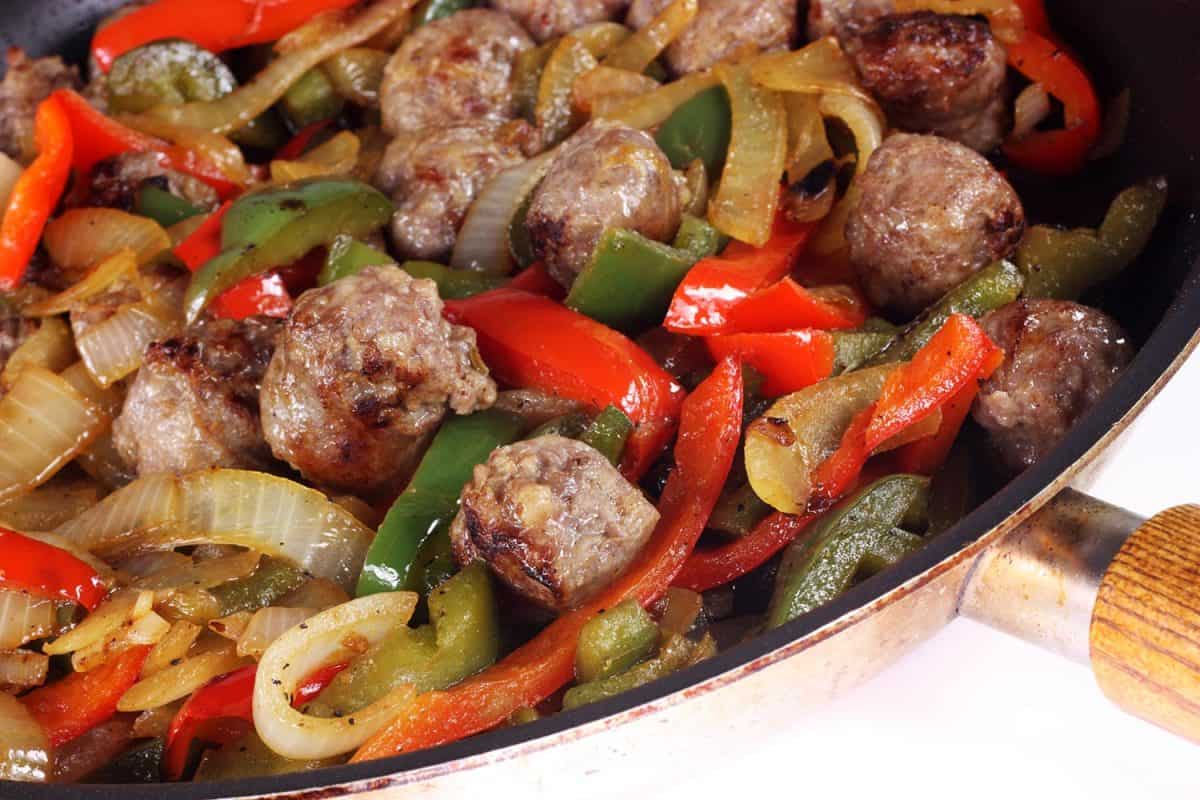 It seems like everyone has the “ultimate” recipe for sausage with sautéed peppers & onions. However, here’s a simple guide anyone could follow to make this iconic dish:

If you want to see a video demonstration of this recipe (plus a few embellishments), please watch this YouTube clip:

To make prep-work easier for this recipe, you may want to consider using a mandoline. This versatile device helps you cut the ideal-sized slices of both onions and peppers in a few seconds.

Find The Right Time For Your Pepper & Onion Preferences

It takes roughly the same amount of time to cook onions and peppers on the stovetop. However, many people prefer to put their onion slices in first to get them nice and caramelized. Chefs who like to leave a little “crunch” in their bell peppers should also consider adding these pepper slices after their onions turn translucent. As long as you stay nearby to monitor your onions and peppers, you shouldn’t have an issue figuring out when they’re ready to plate and serve.

What Potatoes Are Best For Chips?

Can You Make Bread Without Yeast?

How Long Do Ramen Noodles Last?