Stuffed peppers are a hearty, well-balanced, and versatile meal. You can use whatever filling you want to put your own spin on this classic dish. If you are planning to make stuffed peppers soon, you might be wondering what peppers are the best to use and how long they need to be cooked. We have done the research to answer these questions for you.

Bell peppers are recommended for stuffed peppers. They are big enough to be stuffed and have a mild taste that complements the stuffed pepper filling. 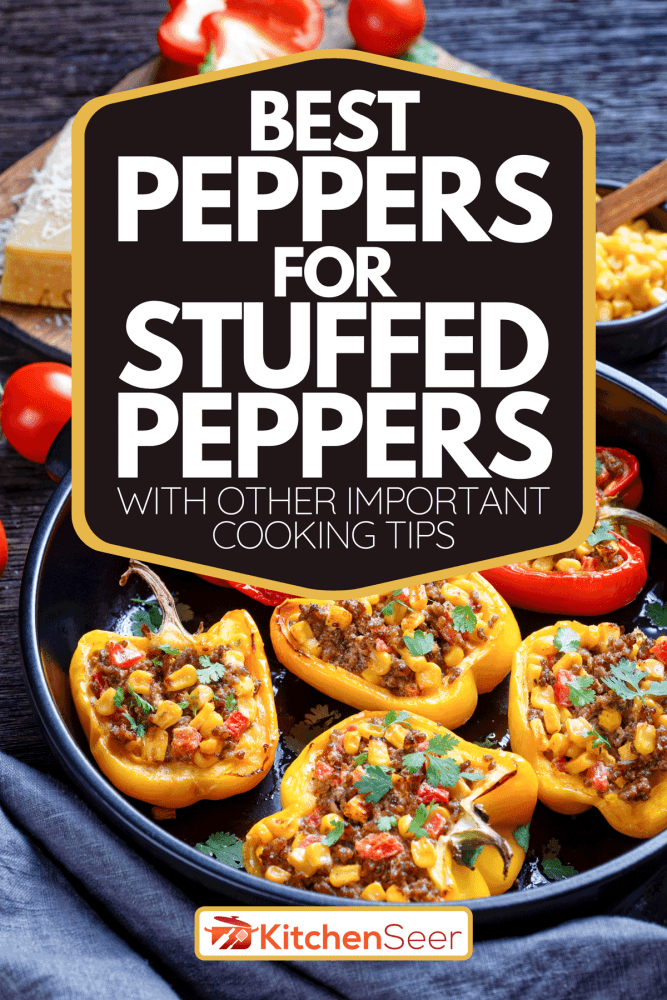 Using different peppers for your recipe will completely change the flavor profile of your dish. Let's take a look at peppers that can be used for stuffed peppers and how they will contribute to the overall taste. 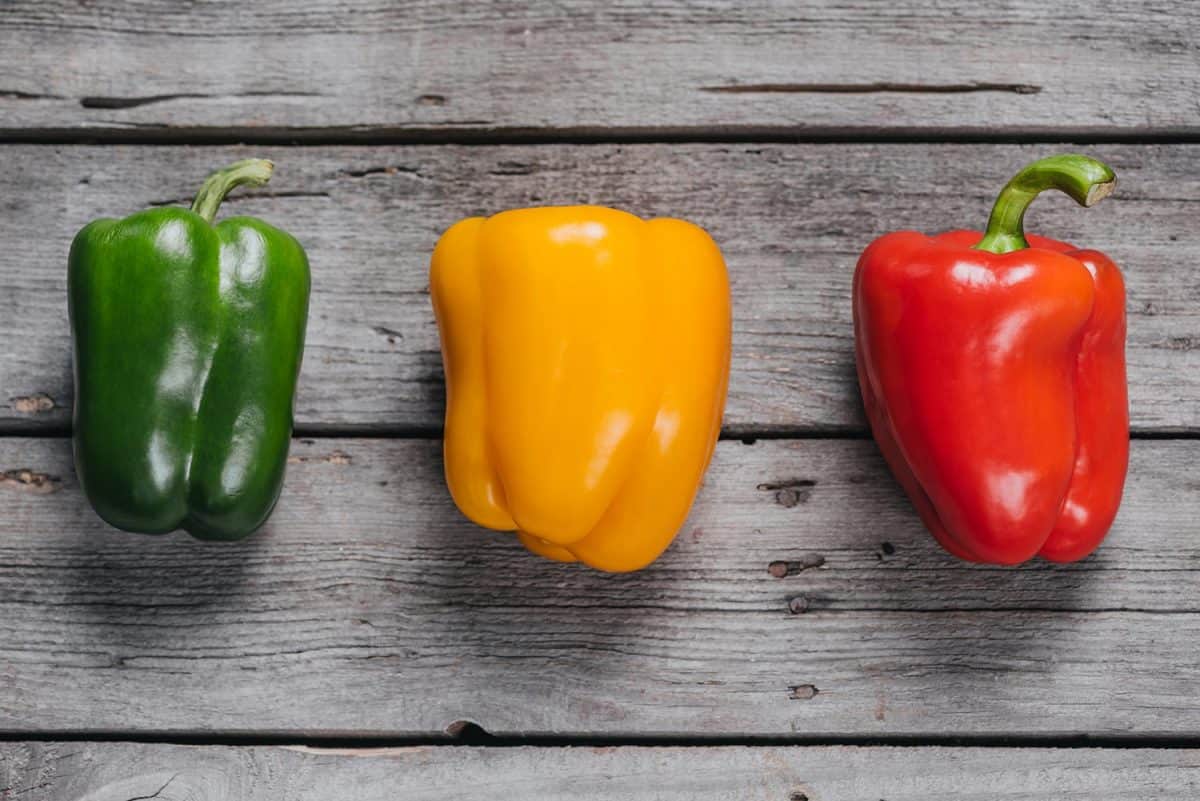 Again, most people use bell peppers when making stuffed peppers. They add flavor to the dish without overpowering the other ingredients. They are also hearty enough to be filled and cooked without becoming too mushy or falling apart.

What Color Bell Peppers Are The Best?

However, red peppers have a lot of benefits that make them a good choice. They are higher in nutrients and sweeter because they are fully ripened. 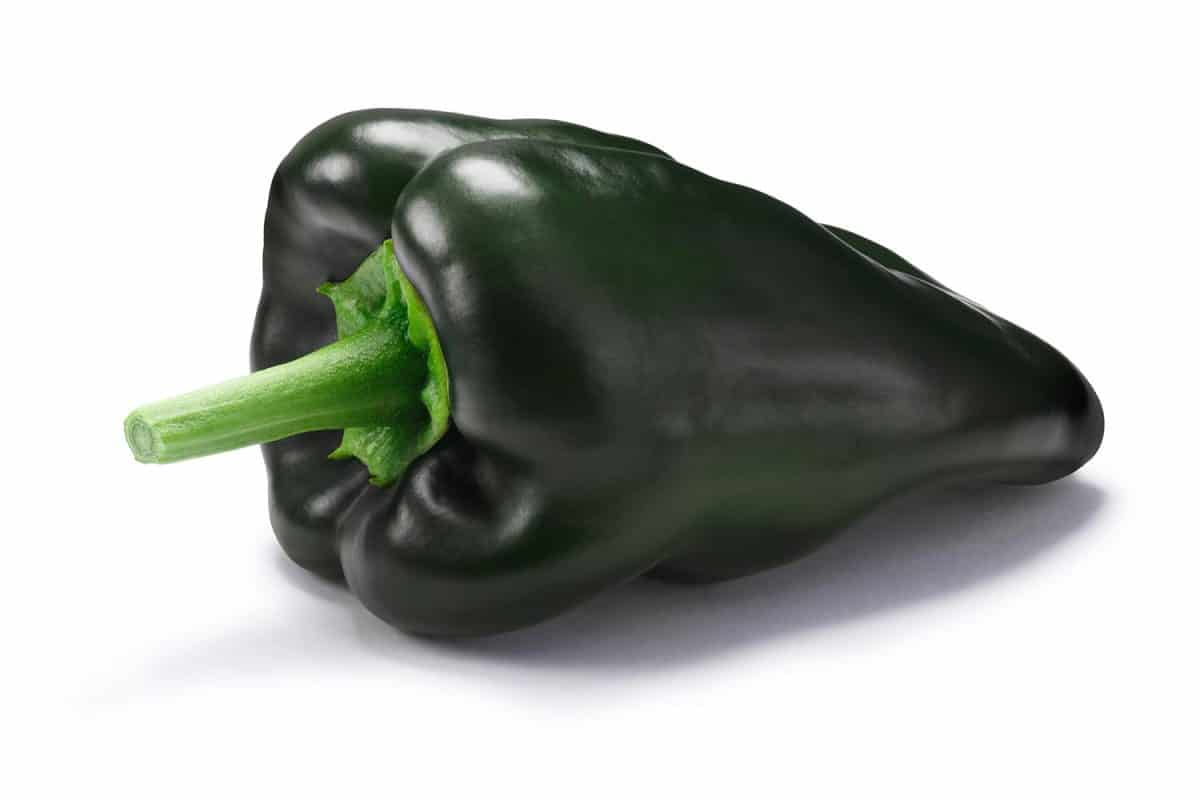 Poblano peppers can grow as large, if not larger, than bell peppers, and they are the most similar pepper to the bell. This means that you will have no problem filling them if you choose to use them for your stuffed peppers instead.

They pack some heat where bell peppers are sweet, but they are mild compared to some of the other hot peppers available. If you want a mild spice, choose green poblanos since they become spicier as they ripen.

You can use your traditional stuffed pepper filling in poblanos because of their mild flavor. If you prefer, however, you can complement the mild spice of the pepper with a spicier filling. This recipe uses chili as a stuffing for poblano peppers. 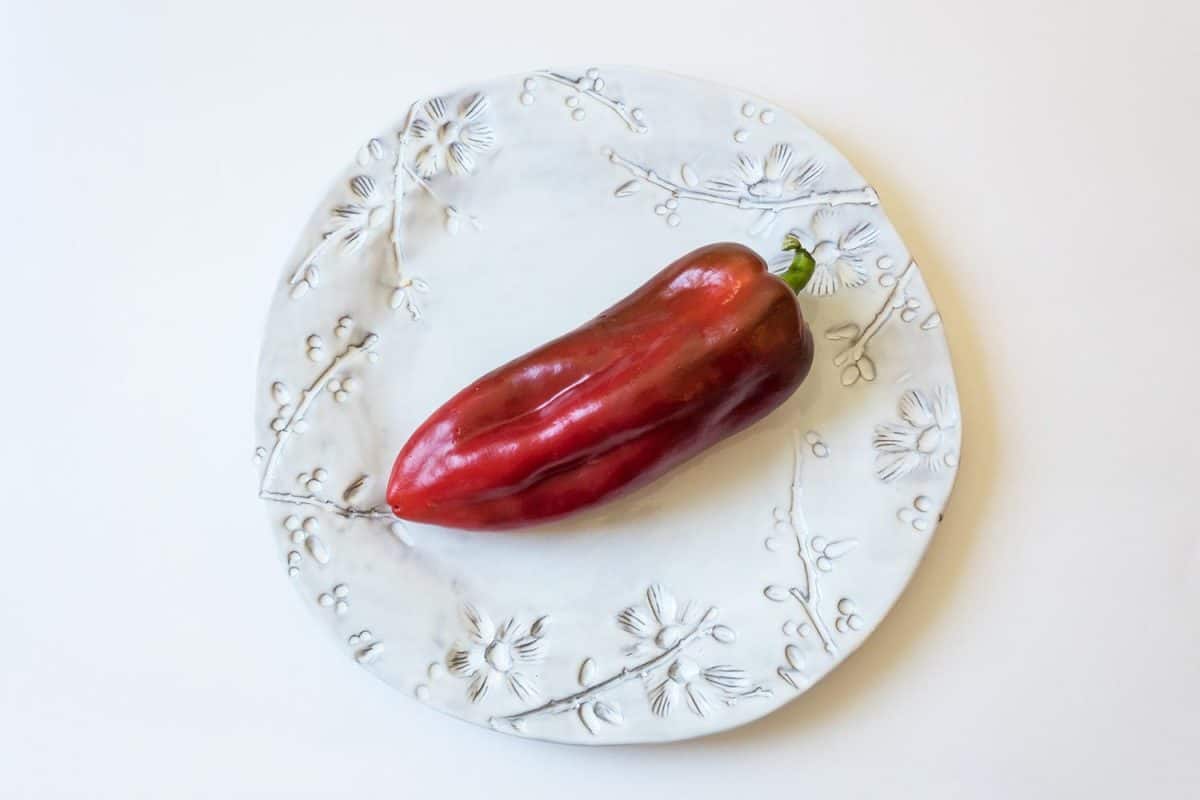 If you want to add some heat but need something milder than poblano peppers, the cubanelle pepper is right for you. These peppers have thinner walls than a bell pepper, but you can stuff them without worrying about them breaking.

Again, their mild taste allows you to keep your stuffing recipe the same or branch out and try something new. This recipe calls for sausage rather than ground beef for the filling. 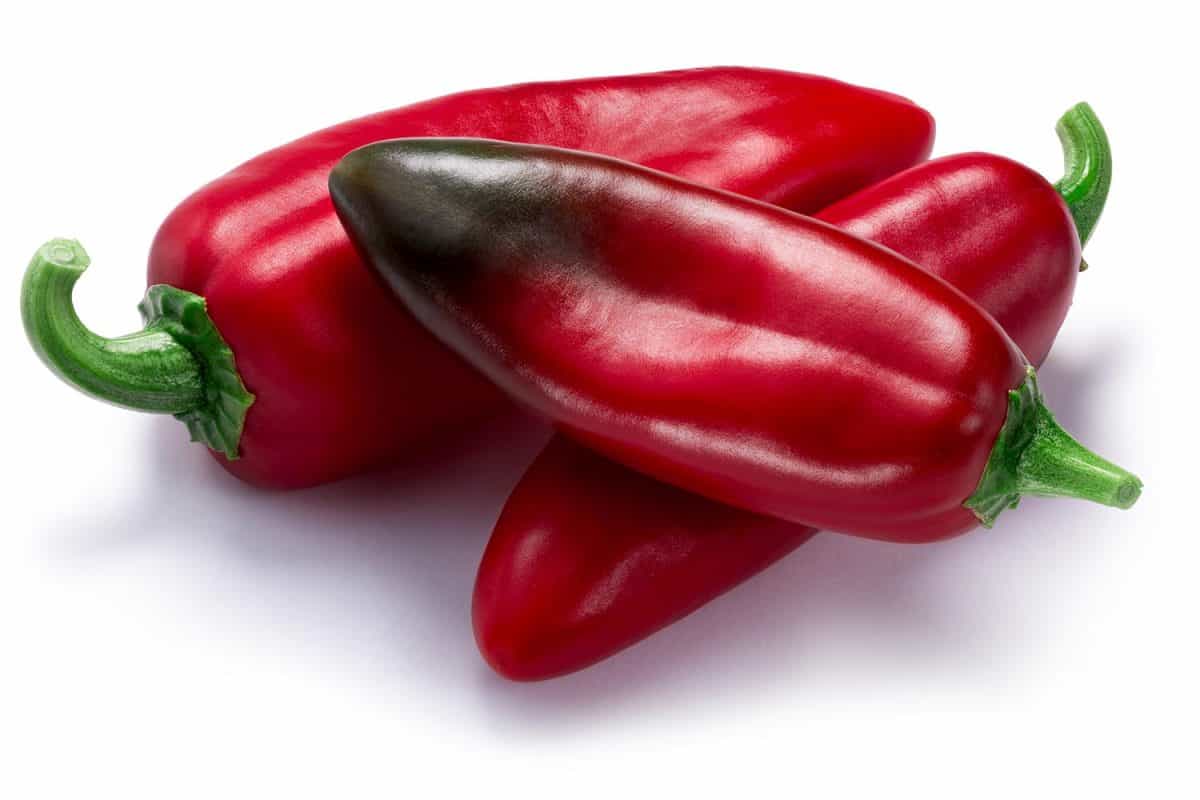 Anaheims vary in heat, in comparison from that of a mild poblano to a spicy jalapeno. Be careful using this pepper if you have children in the home because you might struggle to differentiate between the mild ones and the hotter ones. Anaheim peppers are good vessels for a southwestern-style stuffed pepper, like in this recipe.

How Do You Hollow Out Bell Peppers? 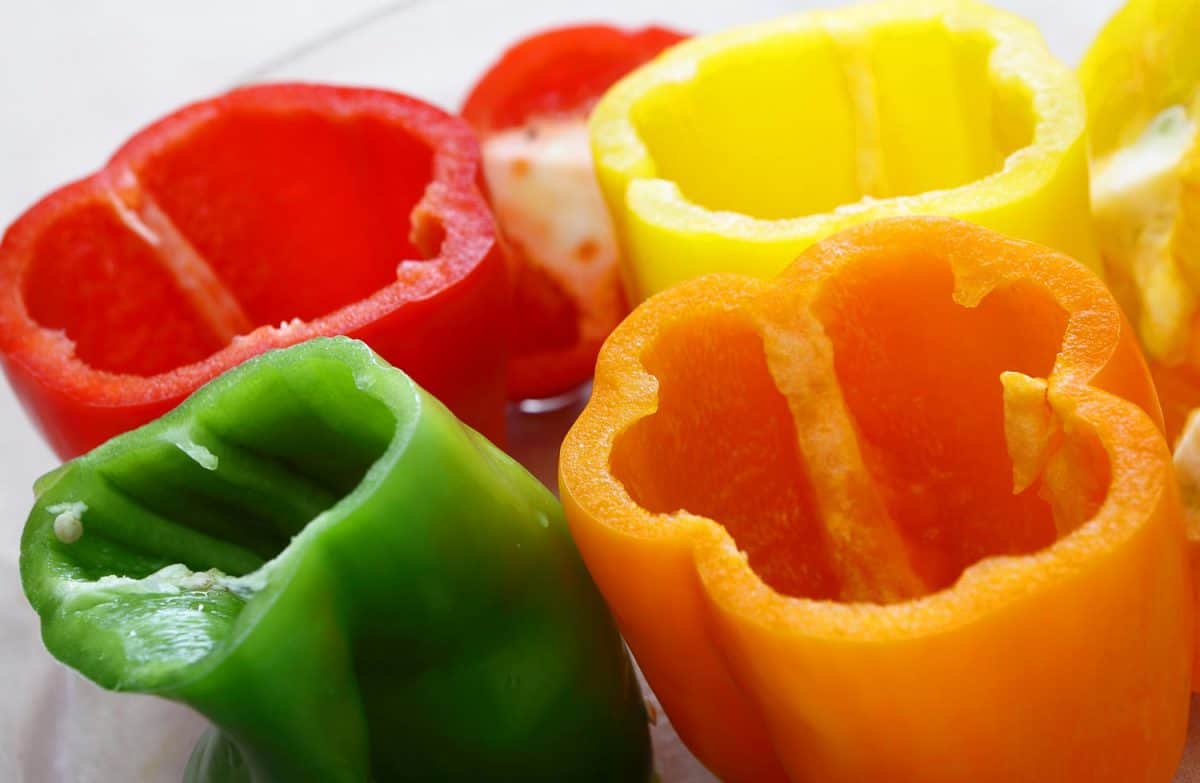 You can hollow out peppers in different ways, depending on how you need to use them. For stuffed peppers, hollow out the peppers without cutting them apart.

To achieve this, cut the top off of the pepper, including the stem. If the seeds don't come out with the stem, use your hands to snap them away from the pepper and pull them out. Then, use a small paring knife to cut any remaining membranes out of the pepper.

Do You Need To Boil Peppers Before Stuffing Them?

You don't have to boil peppers before stuffing them. Use them without boiling first if you prefer a more crisp texture. If you prefer softer peppers, you can boil them.

How Long Does It Take To Soften Peppers In The Oven?

Peppers need to cook for 15-25 minutes in the oven to soften. The longer you keep them in, the softer they will get, so try experimenting to see how many minutes it takes to soften the peppers to your liking.

Can You Microwave Bell Peppers To Soften Them?

You can cook bell peppers in the microwave to soften them. Livestrong suggests cooking them on high for 4-6 minutes if you want to soften them this way.

Do You Put Raw Meat In Stuffed Peppers?

Yes. You can use raw meat in your stuffed peppers. The meat will cook thoroughly while the peppers are cooking in the oven. However, you can cook the meat beforehand if you prefer, which can prevent your peppers from softening too much.

Cooking time and procedure may vary depending on what you are using to cook them. Take a look at the instructions for cooking stuffed peppers based on the method you choose.

Most stuffed pepper recipes advise cooking them in the oven. Plan on baking your stuffed peppers in the oven for 25-35 minutes at 350 degrees. You can put your peppers close together in a deep baking dish so they don't fall over while cooking.

Preheat the air fryer to 350 degrees and cook the stuffed peppers for 10-15 minutes, interrupting the cooking time to add cheese if desired.

How Do I Know When My Stuffed Peppers Are Done?

Keep in mind that there are many variables that affect how long it takes to cook stuffed peppers. Using uncooked rice or meat will result in a longer cook time than using meat and rice that are already cooked.

Whether or not you choose to boil the peppers ahead of time makes a difference as well. Cook your peppers for the lowest recommended cook time and increase as necessary until they are done.

Stuffed peppers are done when the filling is cooked through and the peppers are tender. Like with most cooked foods, the filling should be cooked to a temperature of 165 degrees.

What Can I Serve With Stuffed Peppers?

Stuffed peppers are traditionally stuffed with rice, cheese, sauce, and meat, taking care of most of the food groups. This leaves your options open regarding sides to serve with them. Here are some suggestions:

A light side salad complements the heaviness of the meat, rice, and cheese that are in the peppers. Sticking to traditional salad vegetables will increase the nutrients in your meal and help fill you up without adding more heaviness.

If salad is not your cup of tea, you can pair your stuffed peppers with any vegetables that you prefer. Again, they will help balance your meal and increase the health benefits.

Bread is everyone's favorite carb and works well with stuffed peppers. You can use the bread to sop up the sauce in your stuffed pepper pot.

Rice, quinoa, or potatoes would make a filling side for this vegetable entrée, especially if you are using a light filling. However, if you put rice in your stuffed peppers, another starch may be too heavy to use as a side dish.

Not sure what to have for dessert after enjoying your stuffed peppers? Take a look at these articles for inspiration:

What Potatoes Are Best For Chips?

Which Oil Is Best For Searing Steak?