Stuffed peppers are a delicious meal any time of the year. This dish is easy to prepare, and the stuffing options are endless. If you are thinking about cooking stuffed peppers for dinner, you probably want to know how long to bake them. Lucky for you, we have all the information you need about baking stuff peppers.

Sometimes, peppers cook as fast as 20 minutes or as long as 90 minutes. It all depends on the above factors.

Since there are many possible ways to make stuffed peppers, there is no specific bake time that works for every stuffed pepper dish. But don't let this discourage you from making stuffed peppers because they are an easy and delicious meal. Keep reading to learn about stuffed pepper cook time. 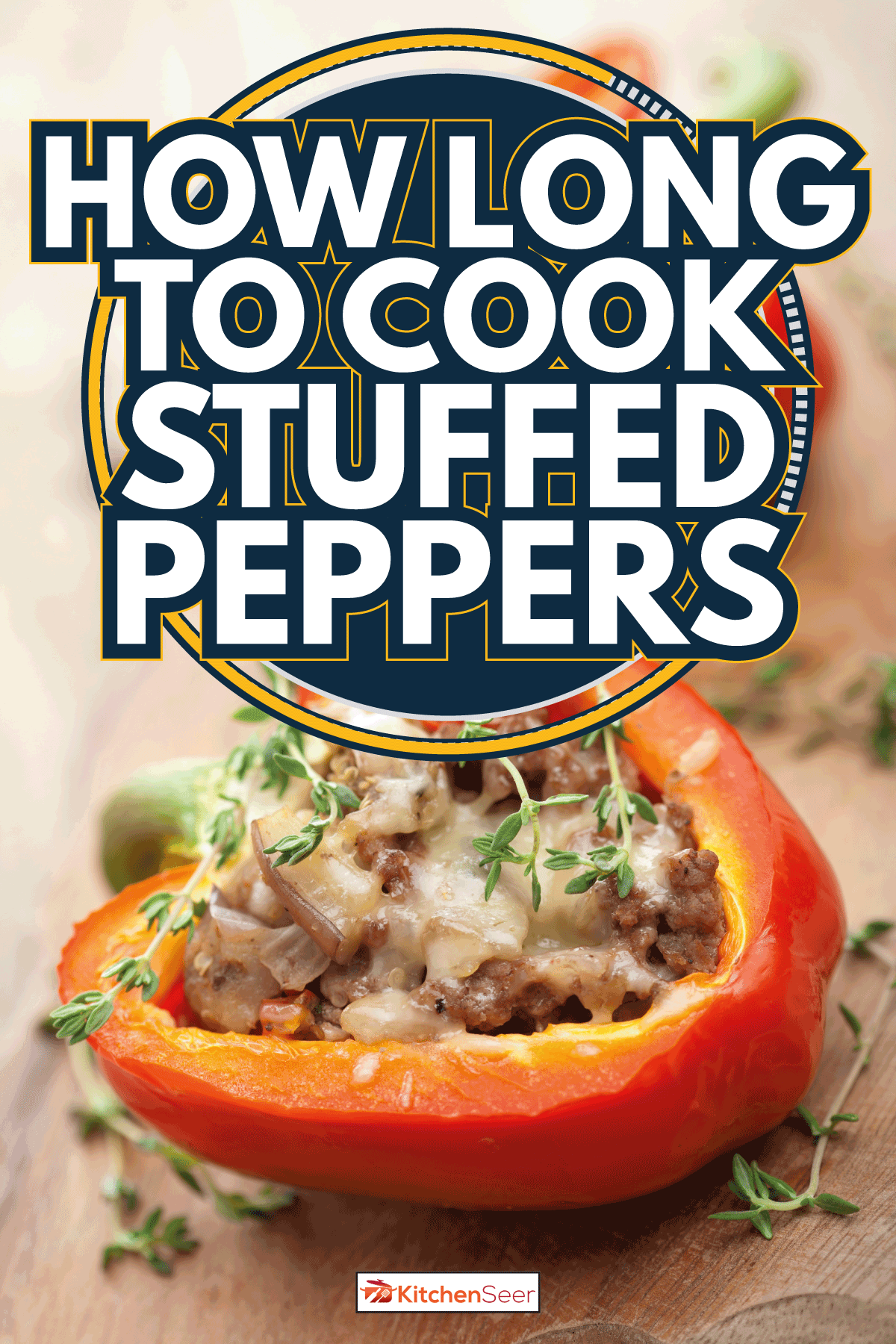 How Long Do Peppers Take To Cook?

Most recipes say stuffed peppers take about 35 to 45 minutes to bake. However, there are a few factors that change the cooking time of stuffed peppers. Let's take a look at these factors: 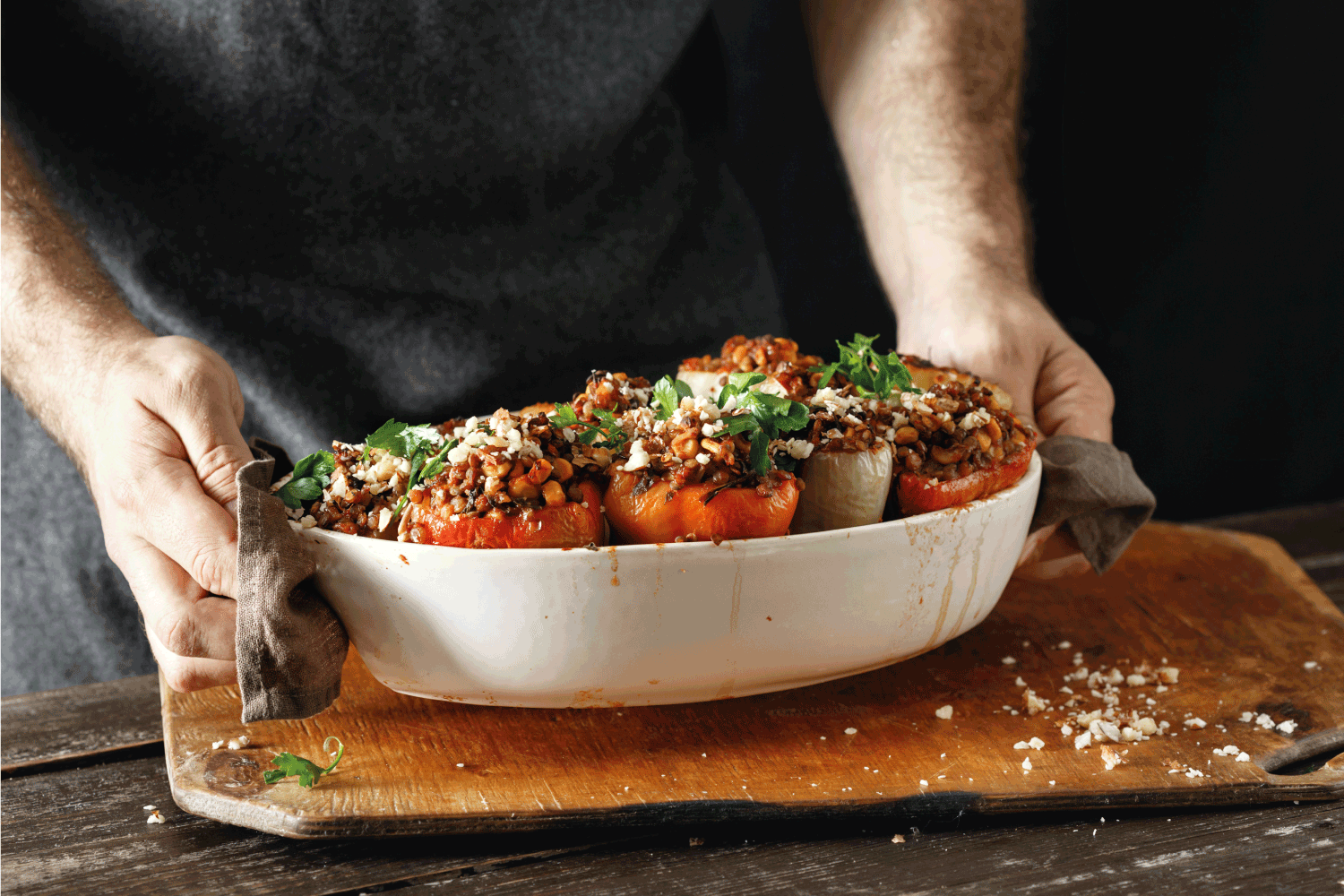 Remember that an extremely high oven temperature can lead to uneven cooking, dried-out peppers, and burnt ingredients. This is why it is recommended to bake peppers in the 350°F to 400°F range.

If you have a convection oven, you should read this article: Do Convection Ovens Cook And Bake Faster? [Including Typical Cooking Times For Common Dishes].

Cut Of The Pepper

Stuffed peppers are typically prepared two ways. The first way is in a whole pepper. The top of the pepper is cut off,  and the seeds are scooped out. Then the pepper is filled with the stuffing. Sometimes, the top is saved and put back on top. It acts as a lid to keep the filling moist. The whole pepper serves as a bowl to completely contain the filling.

The possibilities of pepper stuffings are endless. Whether you are vegan or a meat-lover, there are flavor and filling options to suit every diet.

There are two common ways to prepare the filling for stuffed peppers. The first is cooking the filling in a pan on the stovetop before putting it inside the pepper. Even if you use meat, the meat is cooked all the way through before you add it to the pepper with this cooking style.

The other way to prepare the pepper filling is to use raw ingredients. This could include raw vegetables or raw meat. We don't recommend using an uncooked grain source like rice or quinoa. Uncooked grains will not cook inside a pepper.

Some people prefer this method for preparing the filling because you don't use a stovetop. However, if any raw ingredients are used, especially meat, then your stuffed peppers will take longer to cook. It is imperative to cook the filling all the way through if raw meat is used.

For more information about prepping meat, check out this article: Can You Cut Meat On A Wood Cutting Board? [Raw And Cooked].

A Closer Look At Stuffed Pepper Cook Times And Temps

Now that you know all about what affects the bake time of stuffed peppers, let's take a deeper look at specific cook times for the different stuffed pepper preparation methods:

Filling a whole pepper with cooked ingredients is the most common way to prepare stuffed peppers. For this style, the recommended baking time is 40 minutes at 350°F or 30 minutes at 400°F.

Stuffed peppers prepared in this manor cook the fastest. As soon as the pepper is cooked to your desired softness, the dish is ready to eat. Usually, they are ready in 20 minutes at 400°F and 30 minutes at 350°F.

Out of all the ways to prepare stuff peppers, this way takes the longest to cook. The combination of whole peppers and raw ingredients means it takes 60+ minutes to cook the filling all the way through.

Also, since you don't want to risk burning the outer pepper, we recommend cooking at a lower temperature of around 350°F. If you try to increase the oven temperature, you may burn the pepper and not cook the filling all the way.

If you must use raw filling, putting it in halved peppers decreases the baking time. They can cook as fast as 25 minutes at 400°F and 35 minutes at 350°F.

If you need a timer to know exactly how long to cook your peppers, this is an excellent option. You receive two digital timers with this set. Batteries are included and last for over 1,000 days.

How Do I Know When My Stuffed Peppers Are Done?

However, some people prefer their peppers less or more done. It is ultimately up to you to decide when they are finished. Keep in mind that if you use raw meat, then you should double-check the filling with a meat thermometer to ensure the meat is cooked all the way through. 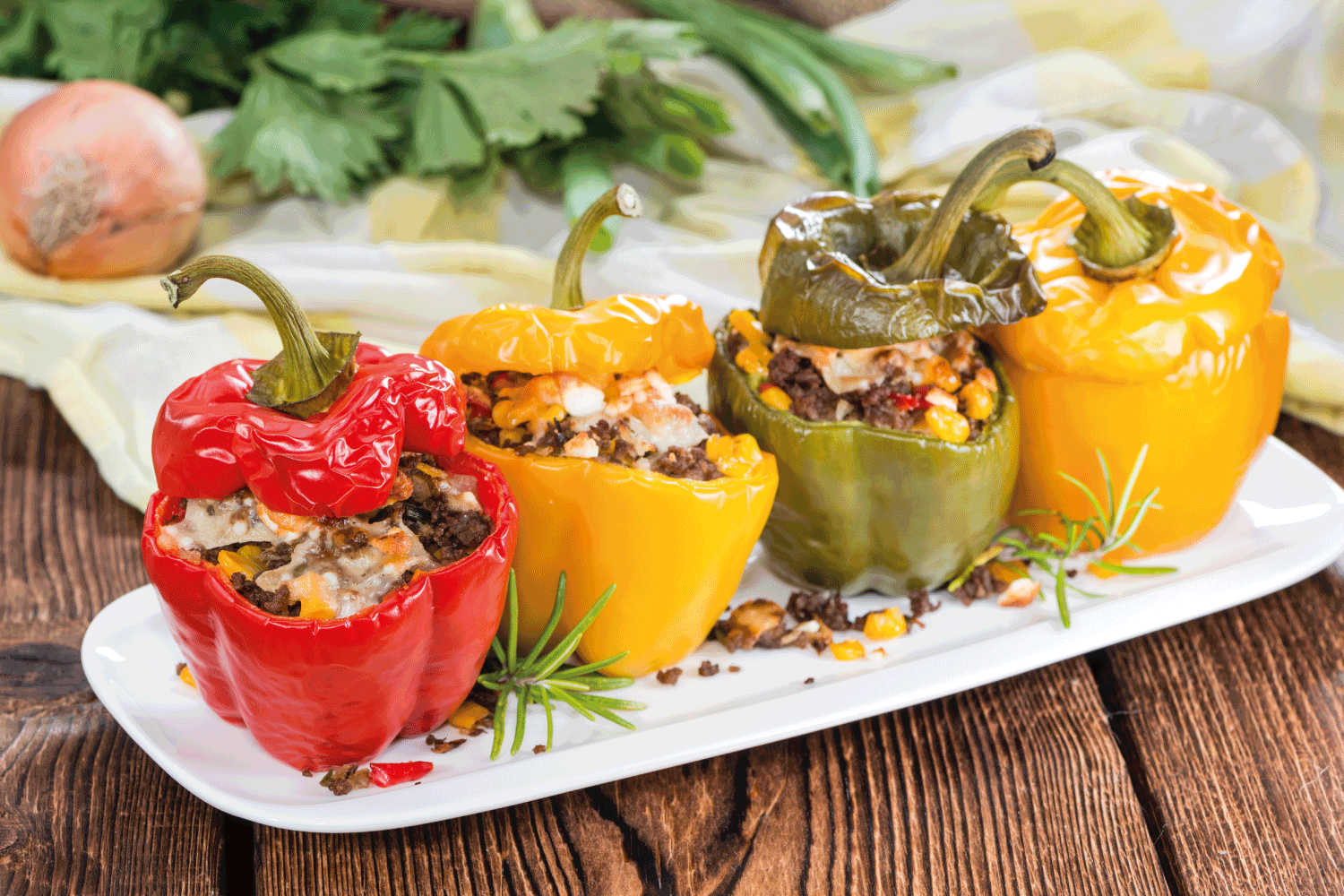 How Long To Cook Stuffed Peppers With Raw Meat

Stuffed peppers with raw meat in the filling need to bake for at least one hour. However, cooking time varies. Sometimes, it may take closer to 90 minutes to cook the meat all the way. It is important to note that the oven temperature should be at least 350°F.

The best way to guarantee your pepper is fully cooked is to use a thermometer to check the internal temperature of the meat inside. Ground meats should cook until they are at least 160°F.

This foldable food thermometer is easy to store and records accurate measurements in as little as two seconds. It is a great option to make sure the meat inside your stuffed peppers is done.

Lasagna is another popular dinner dish that many people prepare regularly. If you are curious about lasagna bake time, read this article: How Long Should You Cook Lasagna? [Including The Pasta Noodles & Time In Oven].

How Long To Bake Stuffed Peppers At 400°F?

Bake time at 400°F for stuffed peppers varies. On average, bake time is between 40 minutes and 60 minutes at this temperature. But, halved peppers may bake as fast as 30 minutes or less, while whole peppers with raw meat in the filling may bake for up to 90 minutes. 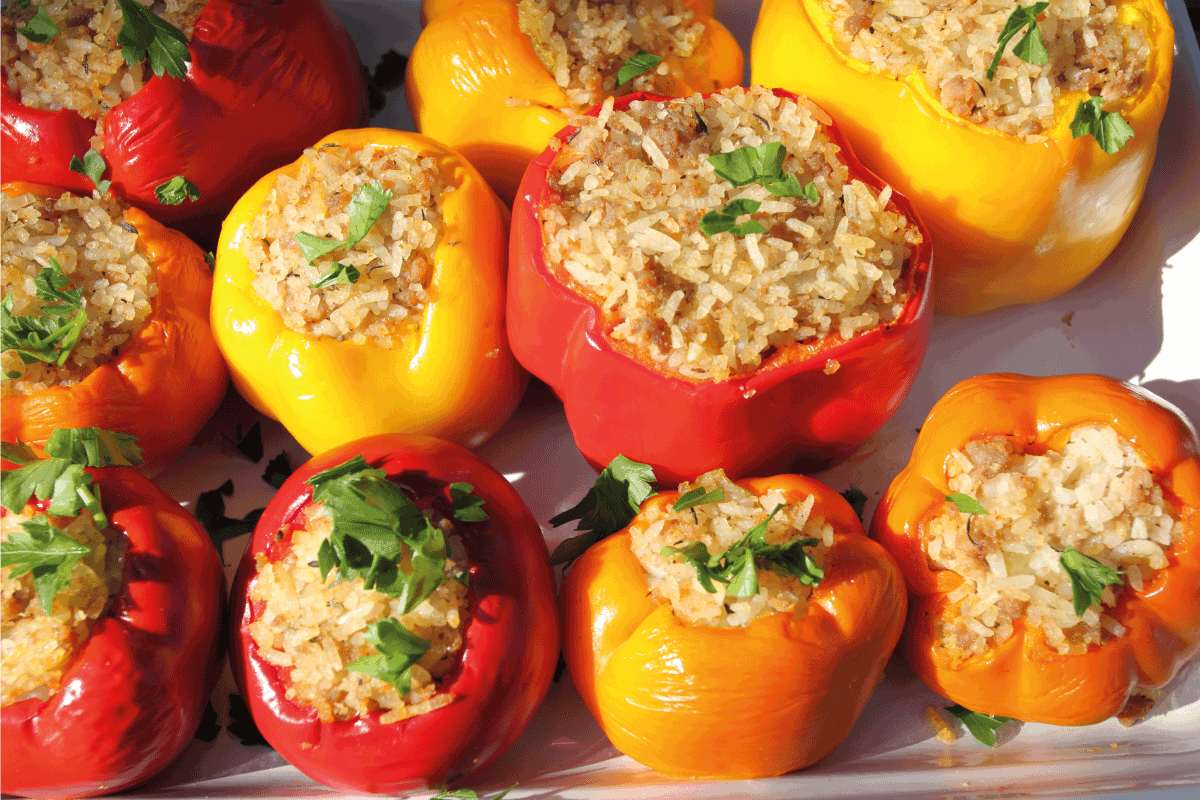 Time To Stuff Some Peppers

Now that you know all about stuffed pepper bake times, you can make a delicious dinner for the whole family. Remember, cooking the filling on the stovetop decreases cooking time. Also, when you fill your peppers with raw meat, you make sure it is cooked all the way through.

Can Bud Light Expire? [Here’s How Long You Can Drink It Past The Expiration Date!]

How To Freeze Casserole Leftovers