Have you ever wondered whether it's OK to sand a Blackstone griddle?

Even though it may sound strange to use sandpaper on a cooking surface, there's nothing wrong with a bit of creativity—especially when you're faced with the problem of rust or scratches on your precious griddle.

And don't worry, you're not the only one to ask. This is why we researched the ins and outs of Blackstone Griddles—chiefly if it's OK to sand. According to experts:

You can sand your Blackstone Griddle to remove rough spots on a new griddle or to remove rust on an old one.

That was the simple answer, of course. But as you'll soon find out, this is easier said than done.

To avoid the possibility of wasted effort [or worse, making it worse], read on to discover details that will help you ensure a top-notch job of sanding your Blackstone Griddle and keep it in good condition afterward. 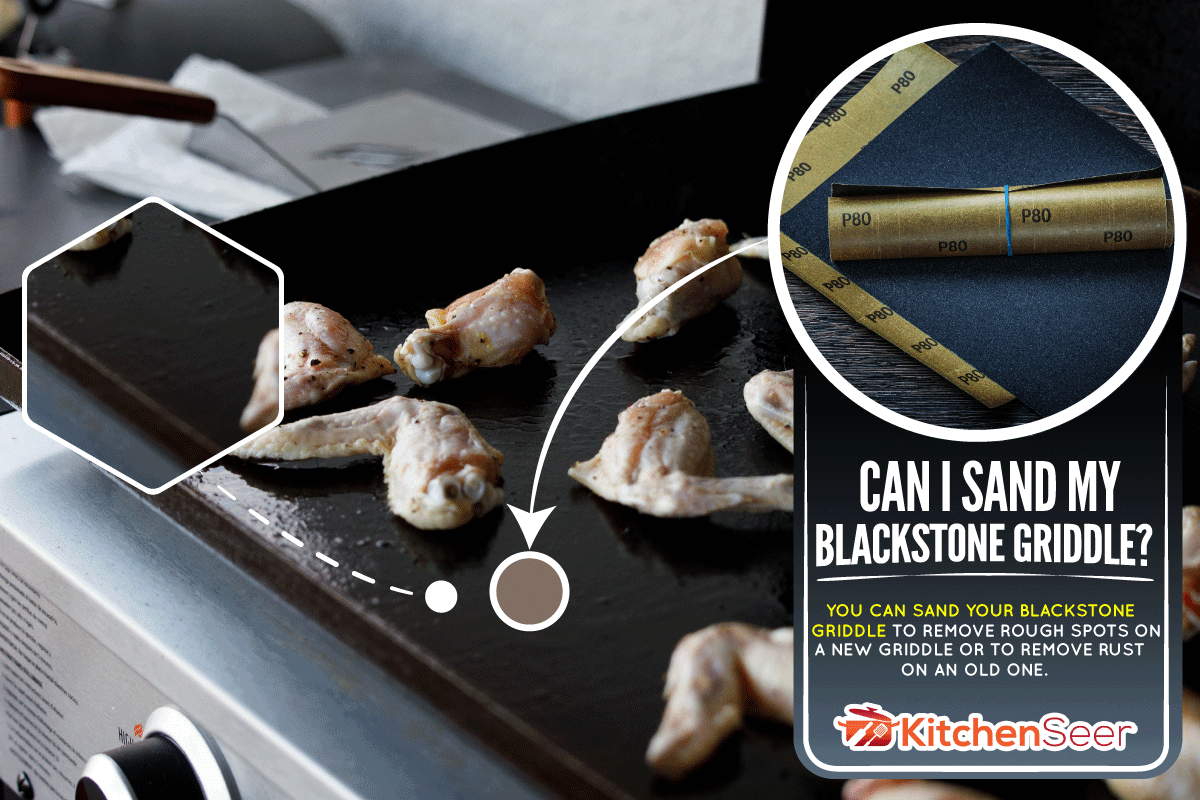 Can I Sand My Blackstone Griddle?

Let's discuss why you can sand your Blackstone Griddle, whether new or old. 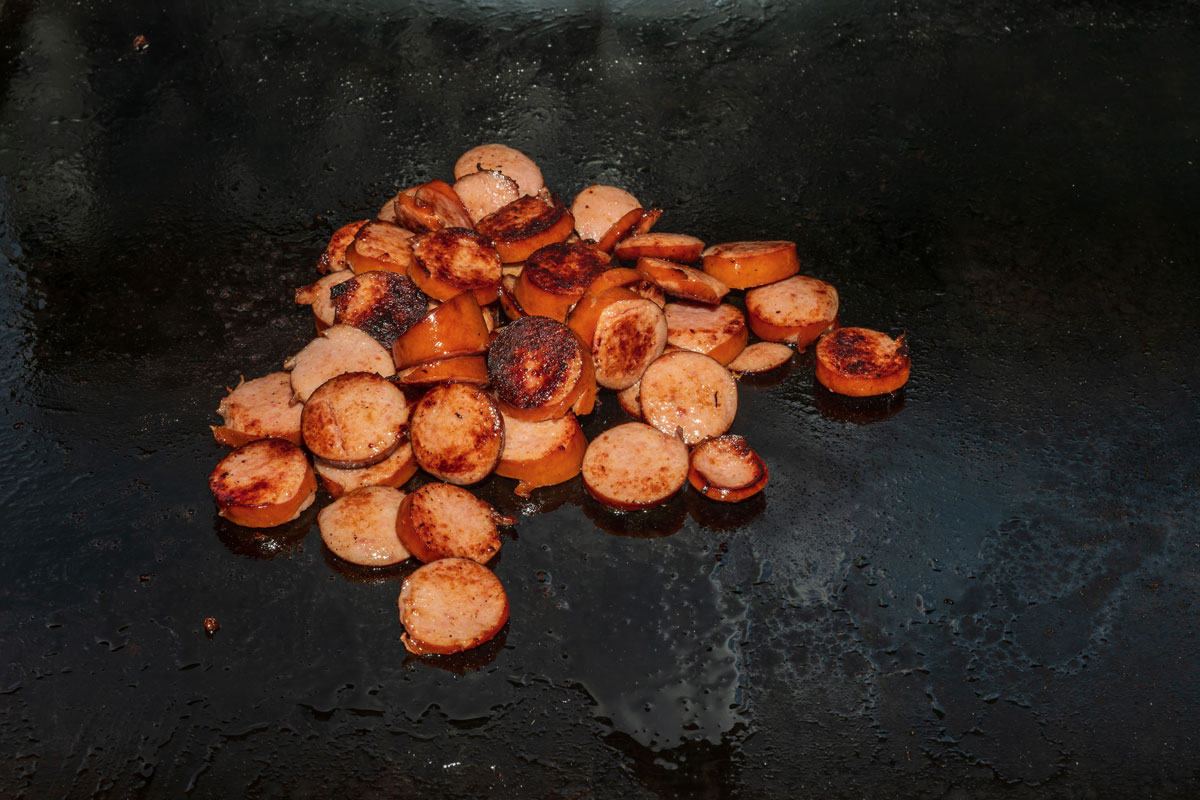 Receiving a Blackstone Griddle can make a sweltering summer day feel like Christmas. You can feel the slight chill of excitement crawling up your spine as you unbox the goods.

As you're taking your sweet time—and taking the components out of the packaging—you begin to imagine the good times you'll soon be spending with friends and family as the makers of this marvel advertise.

There is something... wrong. While running your fingers over the griddle top, you notice some rough spots here and there.

According to Blackstone, damaged shipments can be eligible for replacement. However, minimal scratches are normal during transportation. If we're talking superficial scratches, not big chunks of steel etched out from the griddle top, then sanding can help.

For minor scratches that grab your attention, equip yourself with 120-grit sandpaper and start rubbing. Make sure to ease up on the pressure and let the grit work. We don't want to create more scratches.

It doesn't have to look perfect. Besides, you'll cover the griddle top with a few good layers of seasoning afterward.

Have you ever wondered what a chicken smash burger would taste like if you were to cook it on a rusty griddle? We heard it tastes like blood; not that we tried it, of course.

To get rid of the unsavory notion of consuming as a side dish, you can follow these simple steps:

Why does my Blackstone Griddle keep rusting? 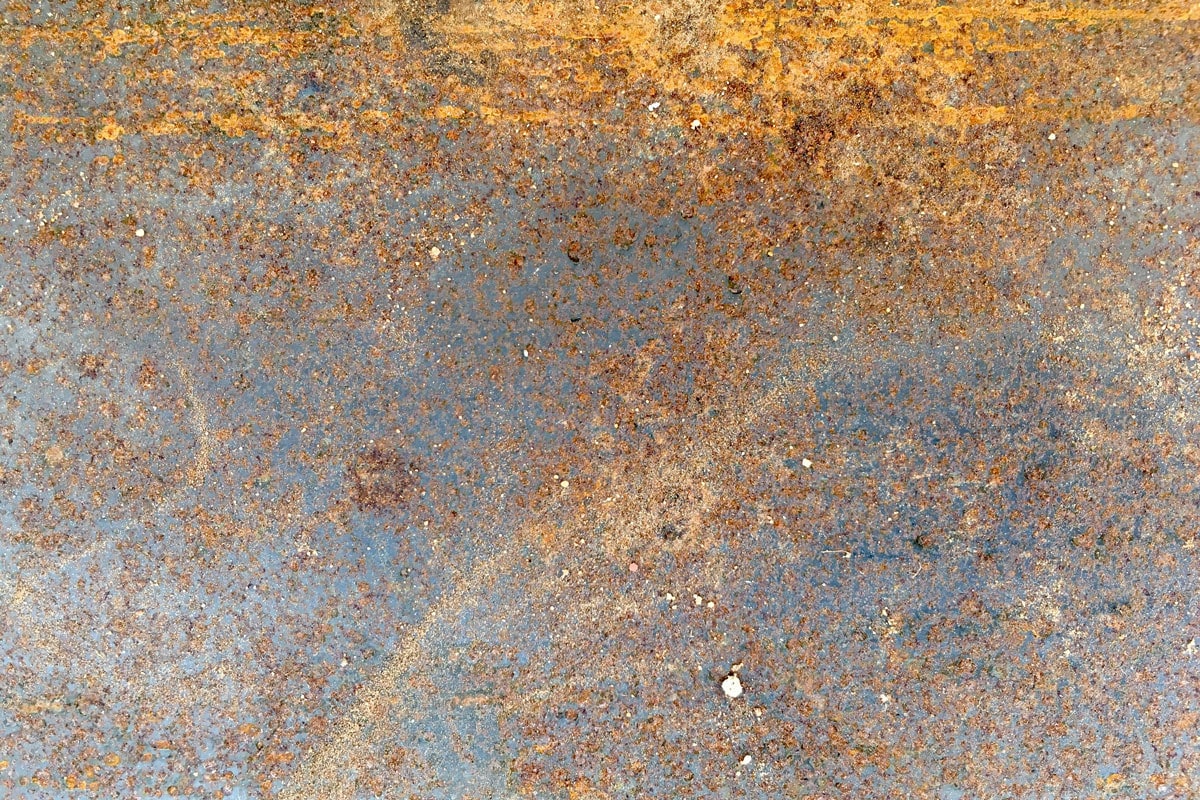 We all know what rust looks like. But what exactly is it?

In layman's terms, rust is the natural by-product of iron collaborating with oxygen and water to destroy your Blackstone Griddle. When we say "natural," we mean you just can't eliminate the possibility of rust 100%.

The transformation works in insidious ways sometimes. This is especially true for those who don't use their griddles often.

One Sunday morning, you're flipping ribeyes with friends in the backyard. Two weeks later, you find that it starts to blot with rust upon inspection.

Each time you cook on the griddle top, you're adding more layers of protective seasoning. But even if you don't plan on cooking with it a lot, there are best practices you can adopt to help safeguard your Blackstone Griddle against rust, albeit not absolutely.

Let's look at what you can do to fend off that reddish-brown stuff from afflicting your griddle.

Most likely, you already know what seasoning a griddle means. It's also possible that you've already encountered the salt-and-pepper jokes about it—but let's not go there because it isn't.

The sort of seasoning that griddle enthusiasts refer to is the blackish layer of oil "baked" on the griddle top. That is what makes your griddle naturally non-stick. It does this by forming a smooth, durable surface that prevents your eggs and pancakes from sticking.

Also, since the seasoning is made of oil—which acts as a barrier against water—it helps stave off rust.

Here's a quick rundown of how to season your Blackstone Griddle:

Cleaning your griddle: the right way 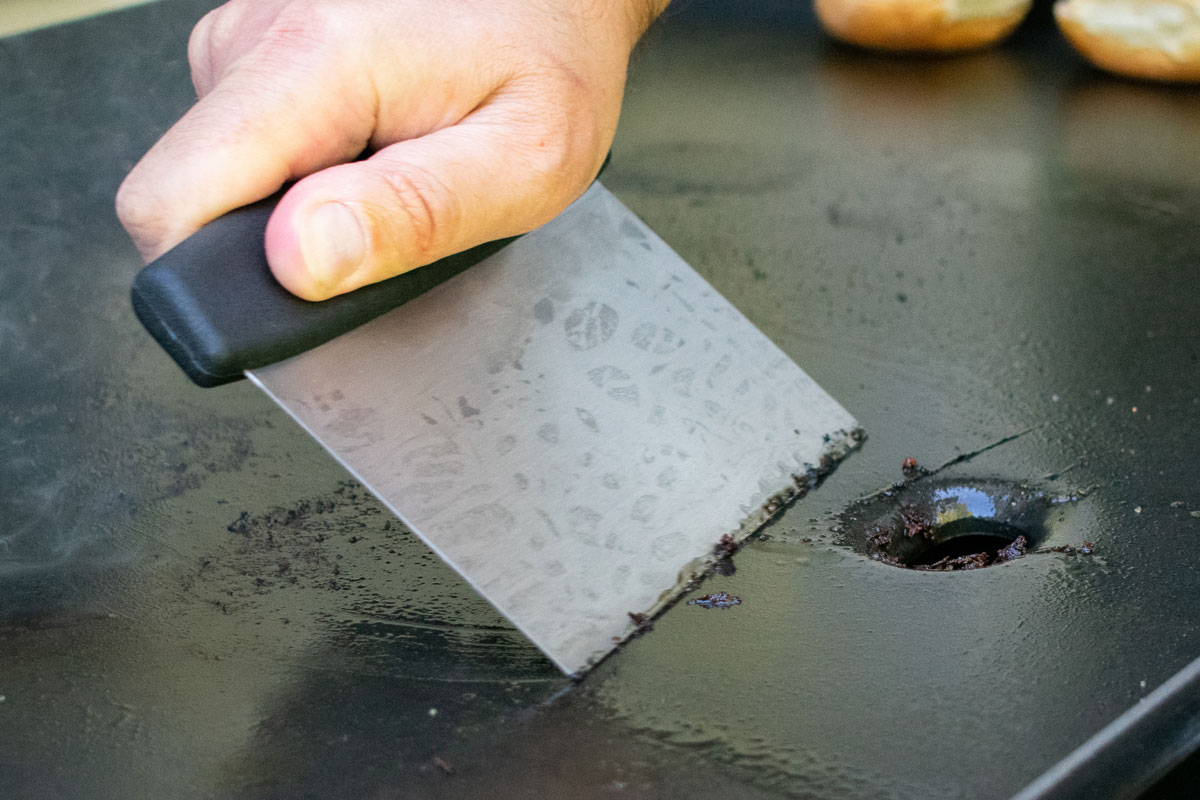 All the ribeyes have been consumed, and your friends have gone home. Now, you think, "that was a great party!" The food was good, and the conversations and laughter were hearty.

As you survey the surroundings, you realize that while everyone's left, you're not alone. So many dishes to wash, and of course, after each culinary experience involving the griddle, you're left with the inevitable task of cleaning it.

The rats will gladly volunteer to do this for you, but they won't do a good enough job.

Properly cleaning the griddle top is necessary to retain the seasoning that you worked so hard on building up. Retained seasoning = rust prevention.

Here's how to clean your Blackstone Griddle the right way:

Some people recommend doing this right after you turn off the griddle. The retained heat keeps the leftover foods loose.

If you decide to clean it while it's hot, wear heat-resistant gloves or use a pair of tongs to avoid burning yourself when wiping it down.

Experts discourage the use of soap. You should only use soap on your griddle top before the first seasoning. Past that, it's off-limits.

Safekeeping against the elements

Blackstone Griddles deserve only the best treatment. As long as you clean your well-seasoned griddle and oil it up after every use, all you have to think about is proper storage.

Some people like to put their griddles in the backyard or garden—the same place where it gets used. Others can't afford to because of the humid weather in their area.

Wherever you decide to park your griddle, keep it away from rain, sprinklers, and the moist portions of your house.

Barbecues and jacuzzis pair well but keep your griddle elsewhere when not in use.

Aside from the ideal location for storage, you can also go the extra mile by purchasing a dedicated cover.

Check out this Blackstone griddle cover on Amazon.

If you plan on leaving your Blackstone Griddle where it might be rained upon, we recommend "tenting up" soft covers like the one above by putting something light on the griddle top before covering it.

How can you ruin a Blackstone Griddle? 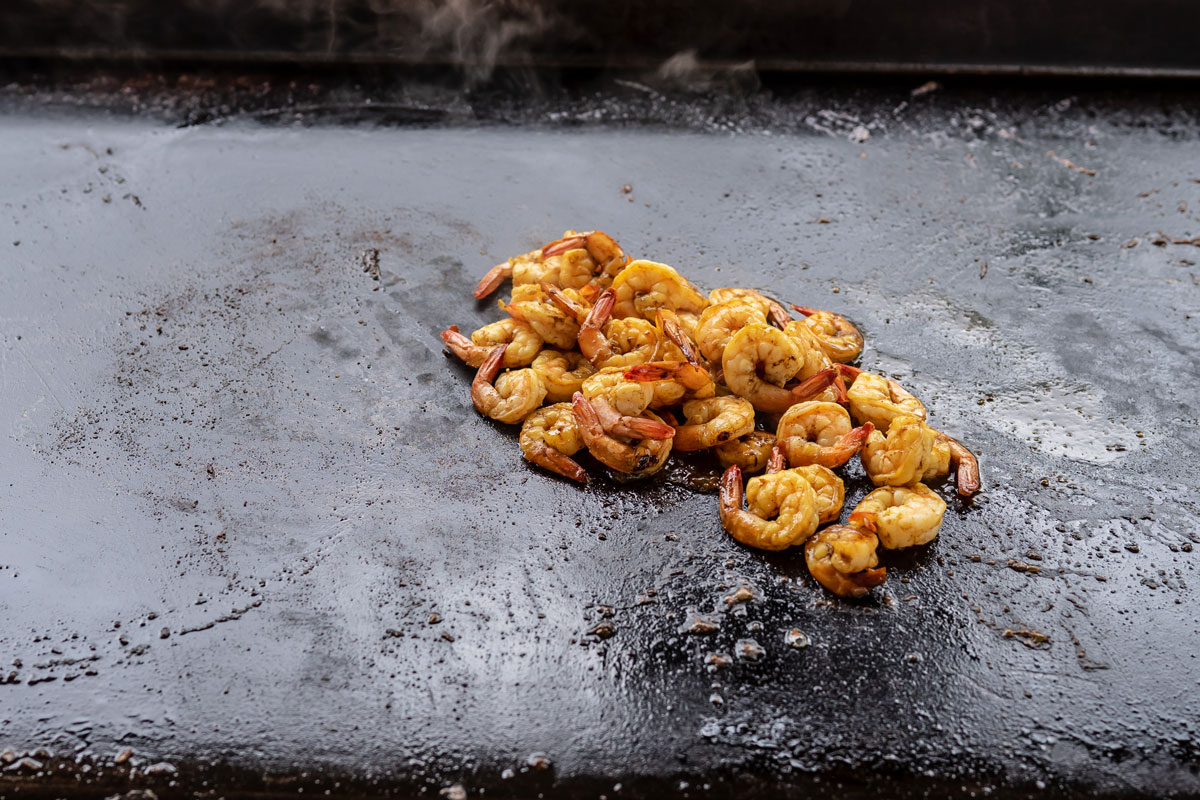 Without sounding funny, you could accidentally drop it from the 3rd floor or smash it with a sledgehammer.

The point is: It's nearly impossible to ruin a Blackstone Griddle, even if you didn't mean it.

But what if I didn't season it right the first time around? What will happen if I leave it in the pouring rain or melting snow?

While we trust that you can't be bothered to allow thoughts like these to occupy your mind at night, we just want to reiterate—Blackstone Griddles are built to last for life. While it isn't immortal, there's always something you can do to revive it.

If the initial seasoning didn't adhere well to your griddle, heat it for around 15 minutes, scrape it off, then re-season it. If the griddle gets overrun by rust, you can always strip and re-season it.

However, you should remember that prevention is always better than cure. If you notice small spots of rust starting to show on your griddle top, pour some white vinegar directly on those. Afterward, scrub the rust off using a grill stone.

While you can get away with doing this for minor rusting, you'll soon have to strip and re-season your griddle top at a more convenient time. 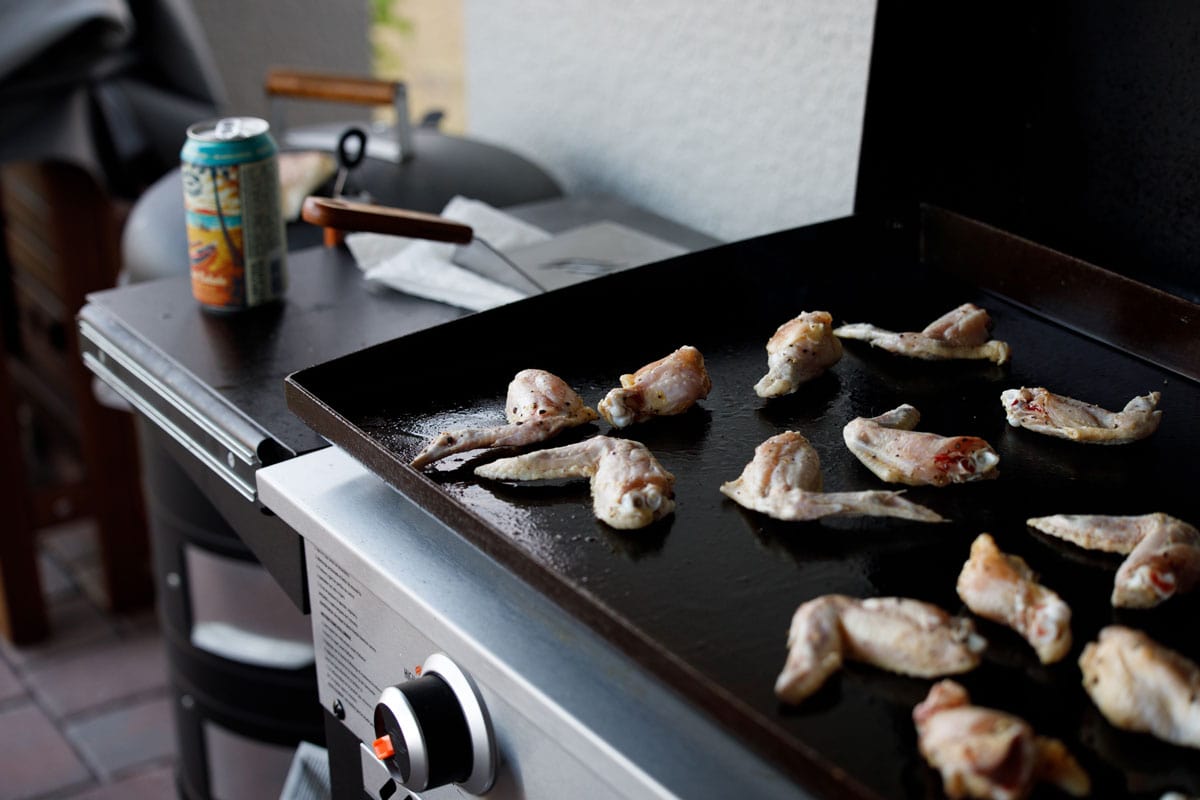 To recap, it's absolutely fine to sand your Blackstone Griddle to smoothen out rough spots and remove rust. Aside from supplying the answer, we were pleased to offer recommendations to keep your treasured griddle in good shape.

If you enjoyed this content, make sure to check out these related topics:

What Can You Cook on a Griddle?

How To Clean A Cuisinart Grill

Blackstone Griddle Igniter Not Clicking – Why And How To Fix?

How Long Does Oven Self-Clean Take?