You’ve been gifted a griddle by a loved one. Perhaps it was a Christmas gift or even a wedding present, but admittedly, the kitchen tool has sat gathering dust. You’re just not sure how to use it. What meals can you make with a griddle?

You can cook the following dishes on a griddle:

In this article, we’ll share recipes for the above ten dishes so you can put your griddle to good use. We’ll also discuss whether you should cook steak, chicken, or eggs on a griddle, so you know which meals to avoid making.

What Can You Cook on a Griddle? 10 Dishes + Recipes

By far, the most popular food to cook on a griddle would be pancakes. Once you learn this recipe, you can easily use it for making pancakes on a camp stove or even a grill.

Our recipe is courtesy of The Spruce Eats. Cooking the pancakes per the recipe takes about 20 minutes from start to finish and yields eight pancakes or griddle cakes if you want to be technical. To jazz up your pancakes, add in sweet ingredients like chocolate chips or blueberries while you’re mixing the batter. 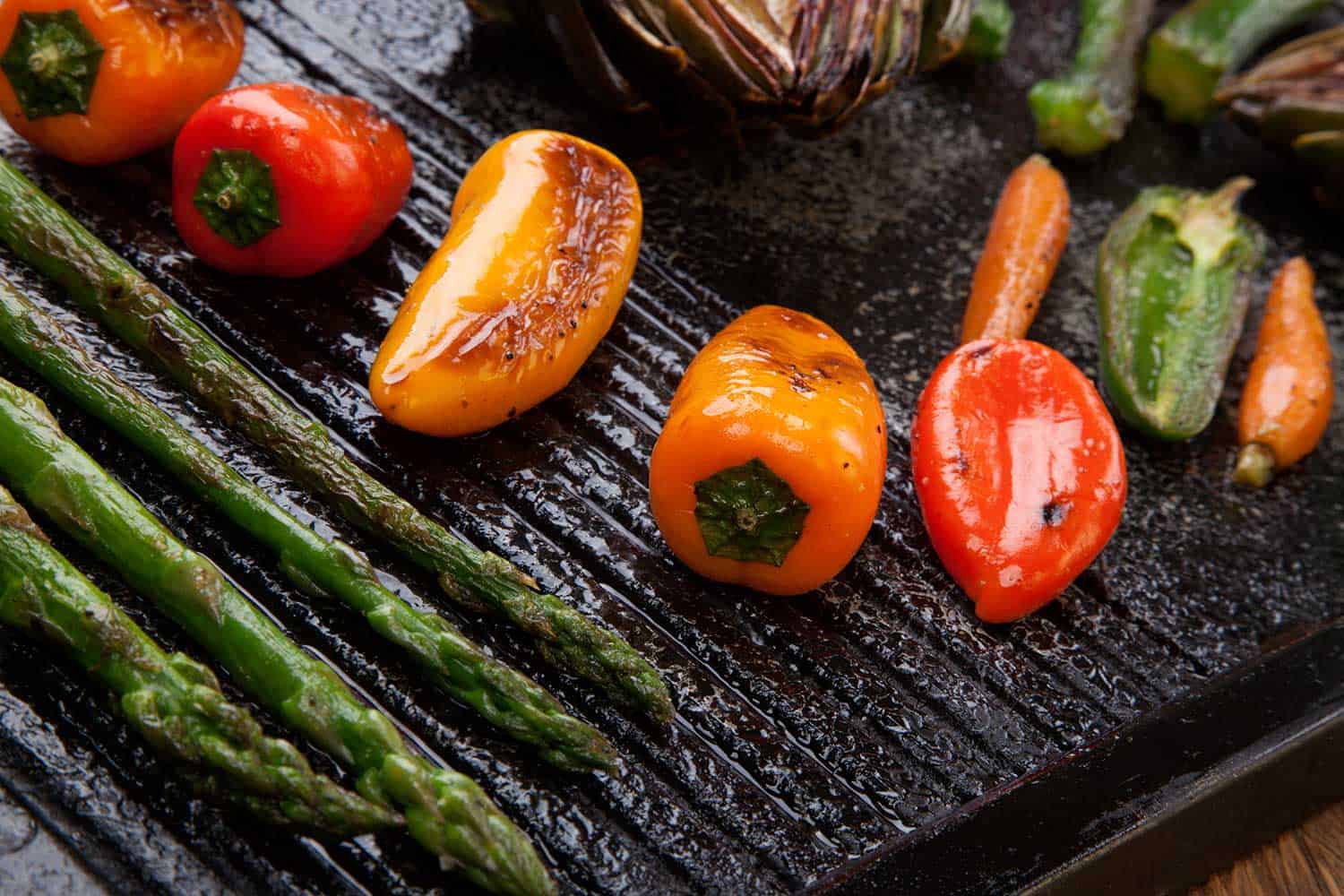 Do you love your veggies cooked and branded with black grill marks? Those don’t exclusively have to come from a grill. You can also get the same effect by griddling your vegetables.

This recipe from BBC Good Food shows you how it’s done. It takes about a half-hour for all the veggies to cook, but they’re so delicious you won’t mind putting in the extra bit of effort.

So which veggies do well griddled? BBC Good Food uses Kalamata olives, tomatoes, zucchinis (which they refer to as courgettes), onions, red peppers, and eggplant (called aubergine in the recipe). You can trade any of these for your favorite grilled veggies if necessary.

If you’ve never tried making quesadillas at home, you’ll be amazed at how easy they are. A griddle acts as a great stand-in for a skillet as this recipe from MyRecipes.com shows.

This version of quesadillas calls for chopped tomatoes and green chilis as well as sharp cheddar and Monterey jack cheese. The fun part is you can exchange those ingredients or add others in like chicken or steak without having to pay the extra fee like you would at your favorite Mexican restaurant.

Treat yourself to a luxurious meal at home that’s restaurant-quality by whipping up some crab cakes on the griddle. You won’t believe how delicious they turn out.

Check out this recipe from Amazing Ribs.com. In only about 25 minutes, you can make crab cakes that will impress all your family and friends. A rosemary aioli livens up the seafood and includes such flavors as rosemary leaves, lemon juice, parsley, minced garlic, and mayonnaise. More mayo added to the cakes themselves keeps this dish succulent.

You may have made grilled cheese a dozen or more times by now, but have you ever tried it on a griddle? It gives the bread a nice grilled texture and melts the cheese, so it’s just oozing out of the sandwich.

We found an excellent recipe for you to follow at Kitchen Treaty. You still want to start by buttering your bread (or using mayo if you have extra from the crab cakes recipe), so the bread gets a nice char on the griddle. Turn the griddle to 275 degrees Fahrenheit, give or take, and flip the sandwich after about five minutes.

If you can make grilled cheese on a griddle, then it reasons to assume French toast would taste great as well. You’d be correct.

Top Electric Griddles has an awesome recipe for griddle French toast. You’ll get a lot of French toast using 12 pieces of white or brioche bread. Three eggs, all beaten, should be enough for you to soak your bread and fry it up to perfection. Don’t forget the dash of cinnamon sugar for a decadent treat that’s a filling breakfast anytime.

No waffle maker? No problem! If you don’t mind your waffles having more of a panini texture and shape than that of a traditional waffle, you can prep these on a griddle quickly and easily.

This recipe from cooking legend Jamie Oliver is a good one to follow. The waffles get their shape and fluffiness from self-rising flour. Each one cooks for roughly six minutes per side, so while it’s not the fastest recipe, it’s a satisfying one you’ll reach for when cooking breakfast or making dessert. 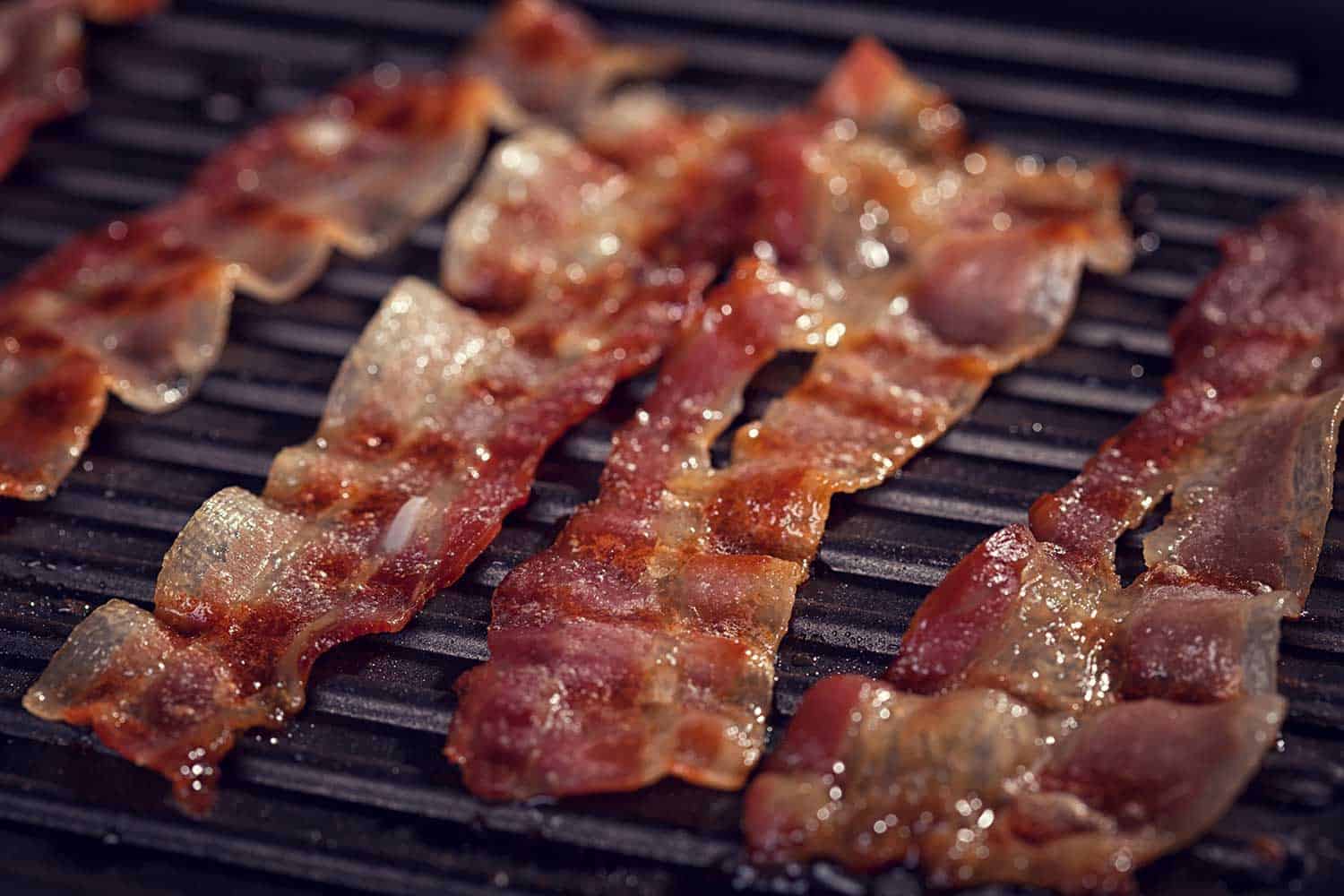 Our last breakfast recipe for the griddle is one for bacon. Like most other morning-time staples, bacon gets crispy, crunchy, and especially delectable when prepared on a griddle.

We found a recipe on Eat Like No One that you’ll want to copy ASAP. The writer cites a lot of great reasons to switch to a griddle for making your bacon going forward. For instance, the fat comes right off, so if you hold onto that sort of thing, it’s simpler to pour off. You can also cook more bacon, and you get to put the bacon flat against the cooking surface, so it crisps up evenly. Also, flipping the bacon is a breeze! Give it a try yourself.

A type of leavened flatbread usually baked in an oven, naan has origins in the Caribbean, Myanmar, South Asia, and Western Asia. It boasts an exotic taste that’s lovely. You can recreate a great naan bread yourself using the most unusual kitchen tool. Yes, that’s right, it’s your griddle.

You don’t want to miss this griddle naan recipe from Plan to Eat. It requires ingredients such as all-purpose flour, honey, sea salt, olive oil, whey, and active yeast. It’s a healthier take on naan that cooks up in about six minutes. Do keep in mind you will have to give the dough an hour or two to rise, so maybe prep it the night before.

You don’t have to live anywhere near Philadelphia to get your hands on a classic Philly cheesesteak. Instead, continue to rely on your griddle, and you’ll almost feel like you’re in the City of Brotherly Love.

We quite like this recipe from Allrecipes, which garnishes the cheese and roast beef sandwich with green bell peppers, onions, and mushrooms. If you want to omit these veggies, you can, of course, and replace them with your favorite toppings.

Can You Cook Steak on a Griddle? 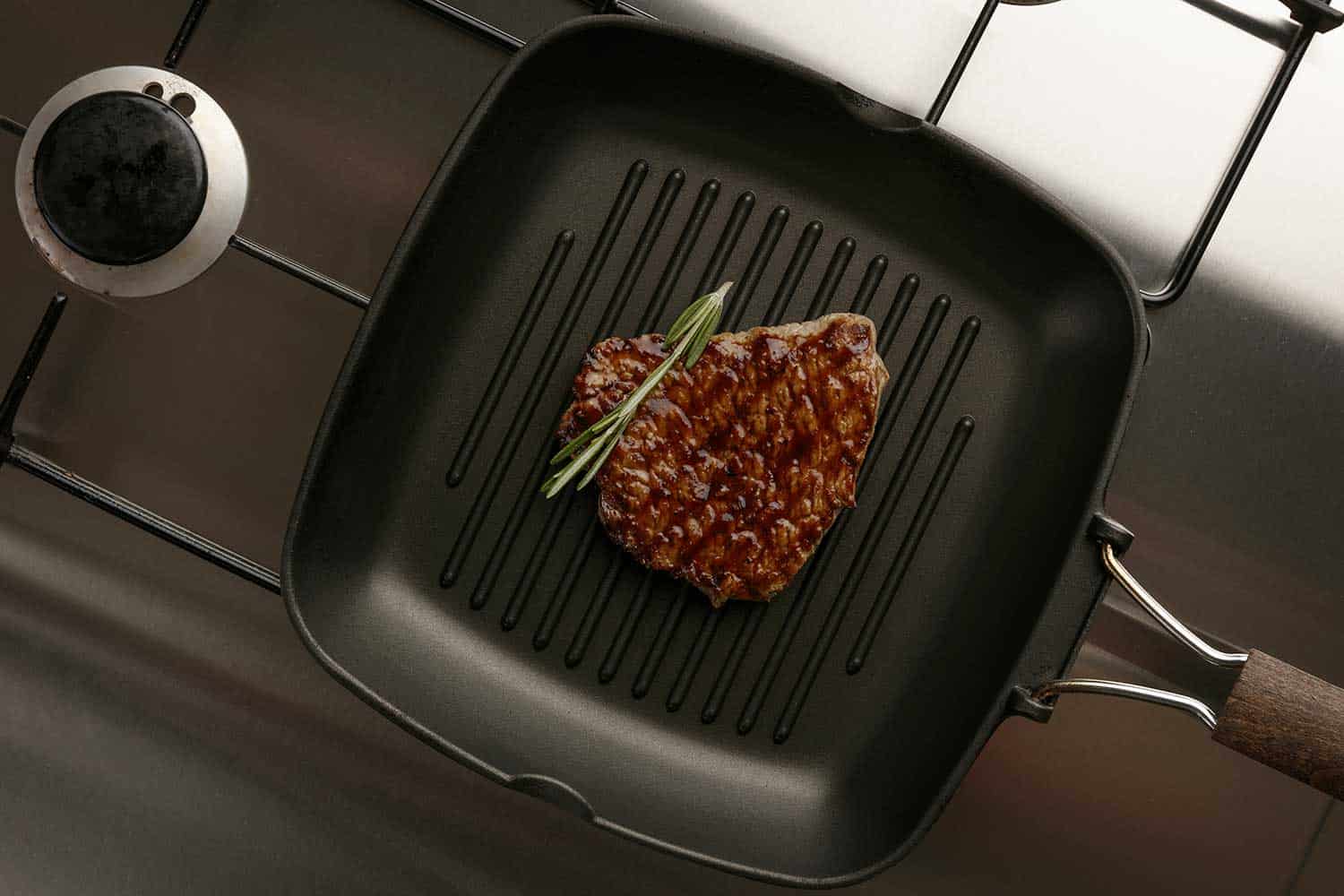 You just came home with a nice slab of meat that you plan on making for dinner. There are many methods for cooking a steak, such as broiling, pan-frying, sear-roasting, grilling, and sous vide. However, you didn’t see steak on our list of recipes above. Does that mean you can’t use a griddle for a juicy cut of steak?

You absolutely can! While some home chefs say it’s hard to track the internal temperature of steak on a griddle, others renown the griddle for offering more room for cooking multiple steaks. Here’s a handy griddle steak recipe from Grill & Skill to get you started.

If you’re curious whether you can cook with a nonstick pan for steak instead, you won’t want to miss this post: Can You Cook Steak in a Nonstick Pan?

Can You Cook Chicken on a Griddle?

Maybe you like poultry more than meat, so you’re interested in cooking chicken on a griddle instead. Is it possible? As you may have imagined, it certainly is. You will want to turn the griddle up to a high temperature to ensure the chicken is cooked all the way through.

Use olive oil or your favorite cooking oil to cover the griddle surface. Then, depending on the size of the chicken breasts (or legs or thighs), you need to cook for about five minutes per side. This recipe from Annabel Karmel uses a marinade that gives the chicken a rich flavor.

Ingredients like ground black pepper, honey, soy sauce, crushed garlic, and lemon juice make a tasty marinade the chicken should sit in for at least an hour. Then you can cook it.

If you’re frying your chicken instead, read this: Can You Reuse Oil After Frying Raw Chicken?

How Do You Grill Eggs on a Griddle?

You have all your breakfast griddle recipes from earlier in this article, but your meal is missing one staple: eggs. Your griddle once again saves the day when whipping up eggs.

From over easy to scrambled and sunny-side up, Livestrong has a series of egg recipes for the griddle that you’ll use again and again.

To see eggs being cooked on a griddle for yourself, be sure to check out this video from YouTuber GCI Turf Services.

Is Cooking on a Griddle Healthy?

Griddles are traditionally made of carbon steel, aluminum, or chrome steel. Are they a healthy choice when cooking for the family?

In most instances, yes, but you want to try to stick to newer griddles when you can. These are made to be less toxic. For example, the GreenLife Diamond Healthy Ceramic Nonstick Griddle is a good one to have.

It’s an Amazon’s Choice product that’s free of cadmium, lead, and perfluorooctanoic acid or PFOAs. Even if you overheat the griddle, you don’t have to worry about toxic fumes.

Griddles are a spacious metal cooking surface in which you can make so many tasty things. From breakfast items like pancakes and French toast to quesadillas, chicken, cheesesteaks, and even naan bread, the possibilities are nearly endless!

7 Types of Chef Knives You Should Know

Blackstone Griddle Igniter Keeps Clicking – Why And What To Do?

How To Drain A Kitchenaid Dishwasher