Bacon is a widely popular side dish. It's a type of salt-cured pork that drives many wild. It makes an appearance in so many meals that it sometimes doesn't make sense! Regardless, preparing bacon at home can prove to be a troubling task. If you're wondering what's the best type of pan to cook bacon, let's find out!

The consensus seems to be that cast iron, stainless steel, and carbon steel pans work best for producing good bacon. Bacon works well with cast iron and carbon steel because the leftover grease serves as seasoning.

However, if you want better heat distribution without doing much on your side, stainless steel is the way to go. This way, the bacon strips won't cook unevenly. Regardless, you can't go wrong with either.

Now that you know the best pan to use when you want to prepare bacon, there might be more you should know. How can we cook bacon on a cast iron? Additionally, what should we do with the leftover grease? If it's your first time preparing bacon at home, you might want to make sure you cover all the bases. If you want tips to prepare the best bacon, keep reading ahead. 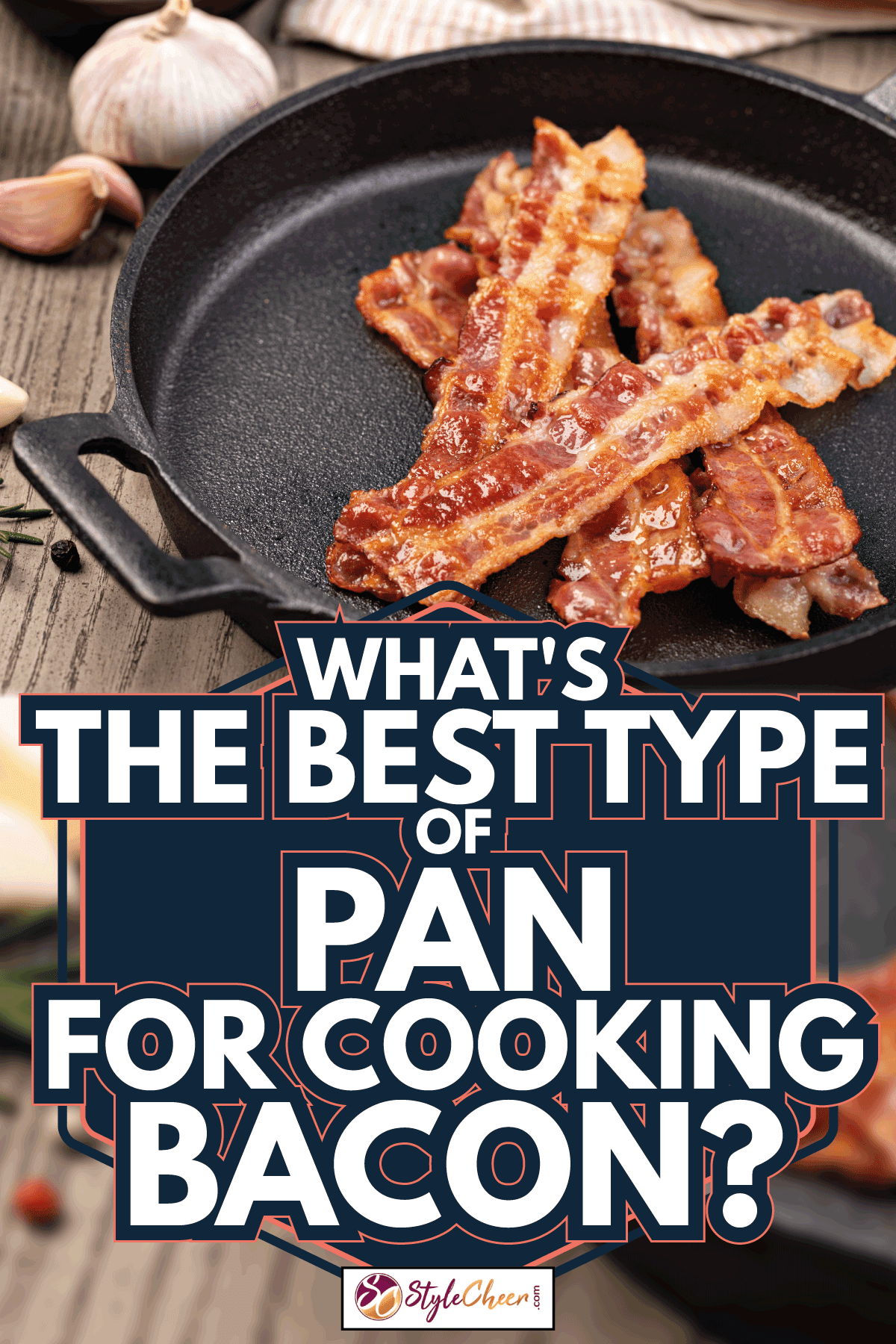 Starting With the Basics

Before you start embarking on your journey to make the perfect side dish, you might want to know what to avoid. As this article discusses, the first problem you want to avoid is using the wrong pan.

It's a common problem to have uneven heat distribution with other pans. For this reason, stainless steel is the king of making bacon if you want to do a little less work.

Cast iron and carbon steel aren't good conductors of heat as many thought they were in the past. Both types of material will contain hot spots. 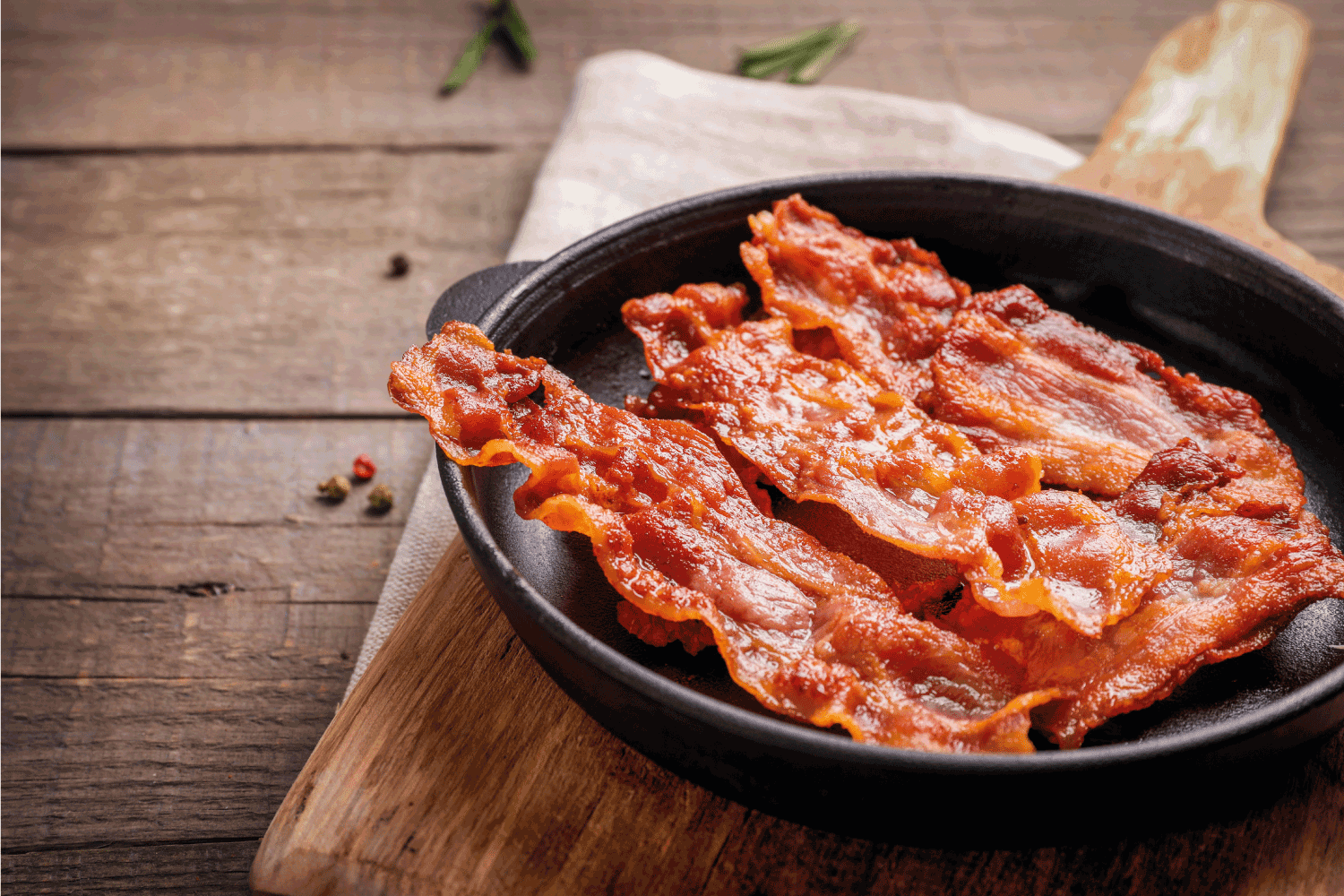 While it might not seem like a big deal, it can be a marker for disaster if you're making a large batch of bacon.

The reason is that some strips might end up overcooked. Likewise, you might pull out other strips of bacon too quickly, resulting in undercooked, chewy bacon.

If you don't want to use the oven for a particular reason, you can also preheat it on the stove on medium-high heat for 3-5 minutes.

If you're going to use a stainless steel pan, there isn't too much to worry about. As some suggest, cooking bacon on a cold pan should work as long as you give the bacon enough time to brown before flipping it over.

Now, you might be concerned about the non-stick aspect of a stainless steel pan. They might give you problems with sticking if push comes to shove.

It shouldn't be too much of a worry since bacon carries a large amount of fat. Some culinary forum members suggest that if the bacon sticks to the pan, it might indicate it's not done cooking.

Regardless, bacon produces a lot of grease. So, sticking shouldn't be too much of a concern.

Some recommend starting the process with a cold pan to ensure the best results. This way, you can cook the bacon evenly without burning edges or leaving rubbery fat bits.

As you might have noticed, it's not the same when you want to cook bacon on a cast iron. On the cast-iron side, you want to preheat the pan to ensure heat is distributed evenly.

Since there's a slight difference in starting points between the two, let's take a look at how to cook bacon on a cast-iron skillet.

How To Cook Bacon in a Cast-Iron Skillet 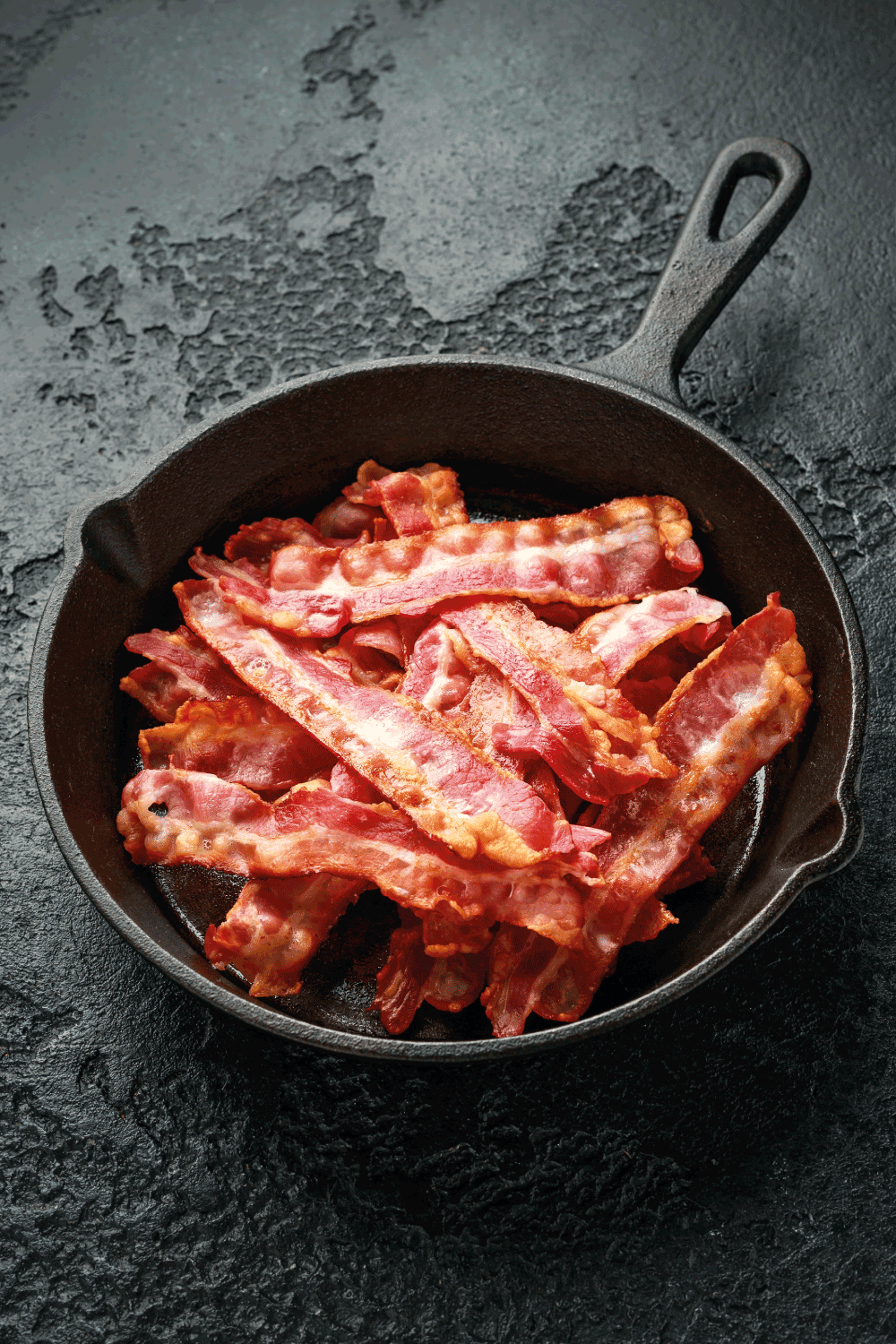 The best texture for bacon depends on the person. Some prefer it crunchy. Others might like it when it's chewy and fatty. Regardless, we'll go over how to produce both results.

We'll start with producing chewy and fatty bacon. As some users suggest, the best way to prepare bacon is by first preheating your pan on high. Leave it on the stove for a couple of minutes. After, lower the heat by half.

This way, we start with a pan that distributes heat evenly. Let the pan sit on the stove for another minute or two. Then, it's time to take your bacon and place it on the cast-iron skillet.

Limit the number of strips you put on the pan to a minimum. Working with a few strips will allow you to cook better bacon.

Leave the bacon on one side until it's able to move around the pan freely. Then, flip it over. Once the other side no longer sticks, the remaining time the bacon stays on the pan will determine the texture.

If you leave it on the pan for longer, you will get a crispy result. Otherwise, if you remove it right away, you'll get chewy and fatty bacon.

The preheating method isn't too popular with many cooking enthusiasts. They claim you're more likely to make burnt bacon strips instead of the crunchy one we all know and love.

And, if you remove the bacon too early, you'll end up with a flabby piece of bacon. Still, the debate for what makes the best bacon is all up to opinion.

So, you might want to test the preheating method before completely writing it off. Now, let's take a look at the cold start method!

The cold start method is what the name implies. You'll start with a cold pan. So, you won't need to preheat the cast iron. Instead, you'll lay the strips of bacon on the pan right away.

Start by arranging them in a way where there's minimal overlapping. A little bit of it is fine because the bacon will shrink as it cooks.

Put the stove on medium or medium-low heat. This way, you can allow the fat on the bacon to render.

For those unfamiliar with the term, it means to cook the fat out of it. Once it turns brown on one side and begins to move on the cast iron freely, flip it over.

From here, it's up to you whether you want crunchy or crispy bacon. All in all, this method should take around 8-12 minutes to complete.

Leave it on the pan longer for crispy bacon. Take it off earlier to get a fatty texture. For the final step, lay the strips on a paper-lined plate to remove the excess fat grease.

You should be good to go! Now, what do we do with the cast iron after cooking bacon on it? Where will all the grease go?

What Do You Do With Cast Iron After Cooking Bacon?

The first thing you want to do is strain the excess fat into a jar. You can store it in the freezer for later use. However, it will only last about one month or so.

If you have no intentions to use it in the future, you can wait until it hardens on the pan before scrubbing it away into the trash.

Pouring it down the drain isn't a viable way to dispose of it. As mentioned above, the grease will begin to harden once it gets cold. So, if it's in your pipes, you might have created blockages.

From here, all you'll need to do is clean off the burnt bacon pieces left on the pan. If you've waited too long, the bits of bacon might have already solidified on the cast iron.

In this case, we'll provide you with a YouTube video showing you how to clean off the stubborn bits:

Can You Cook Bacon in a Dry Pan?

When you're thinking about cooking bacon, one concern that might come up in your head is sticking. For this reason, you might opt to use oil to prevent it from happening. But, you might have noticed that bacon is a dish loaded with fats.

Bacon contains a lot of fat that will melt and lubricate the cast iron as it cooks. Still, you might notice that there tends to be a bit of a sticking issue.

How Do You Cook Bacon Without It Sticking?

Cooking bacon without sticking will depend on the type of pan you're using. If you're using a stainless steel one, some suggest using more oil to prevent it from sticking onto the pan.

On non-stick surfaces like a cast iron or a non-stick pan, you can get away with relying on the bacon fat.

Additionally, the cold start method will work best to ensure there isn't too much of an issue of sticking. Letting the bacon cook at low heat ensures the fat will render.

So, if you've been having trouble cooking bacon with a preheated pan, give the cold start method a go.

Do You Need To Flip Bacon on the Stove?

Flipping will always be a requirement when you're cooking on a stove. In an oven, the bacon will cook evenly. On the stove, it's a different case. To ensure the food cooks evenly, you'll need to flip it.

Flip bacon once one side turns brown and moves freely around the pan. 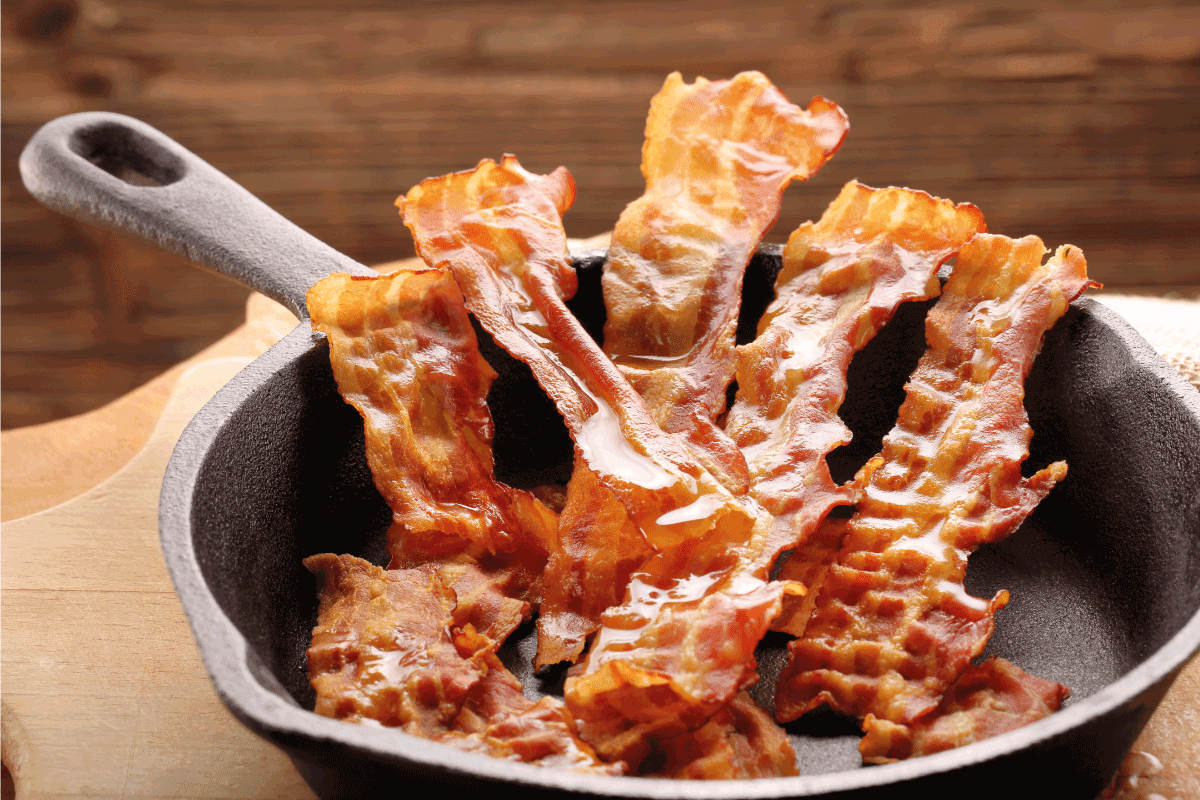 Bacon is a treat that drives many wild. But, knowing how to cook it to your preference can be tricky. Of course, it never hurts to keep practicing! We hope you found the information above helpful.

Before you go, we have other topics you might want to learn about. Would you like to know how to grill french fries? You can learn more by checking out our post here.

Are you planning to bake cinnamon rolls? If you'd like to learn the best pan for them, check out our post here. Until next time!

Should You Grease Silicone Molds And Cake Pans?

How To Store Homemade Noodles—Cooked And Precooked!