Handling bacon can be an issue that makes you slightly anxious. After all, it's meat! Meat tends to go bad somewhat quickly. One of the signs of decomposition is sliminess. If you're wondering why your turkey bacon is slimy, we're here to help.

Even if your turkey bacon is slimy, you might want to wait before throwing it away. It can depend on the brand of the turkey bacon and the degree of sliminess. Some will have a texture that might feel slimy.

But, it could simply be bacon that's holding excess moisture. Otherwise, it could be bacteria forming, which indicates it's going bad.

Sliminess is only part of the decomposing process. There are reasons slime begins to form. While it's one indicator of spoilage, there could be another reason why the bacon feels that way. If you'd like to learn more about the process, keep reading ahead!

Where Does The Slime On Turkey Bacon Come From? 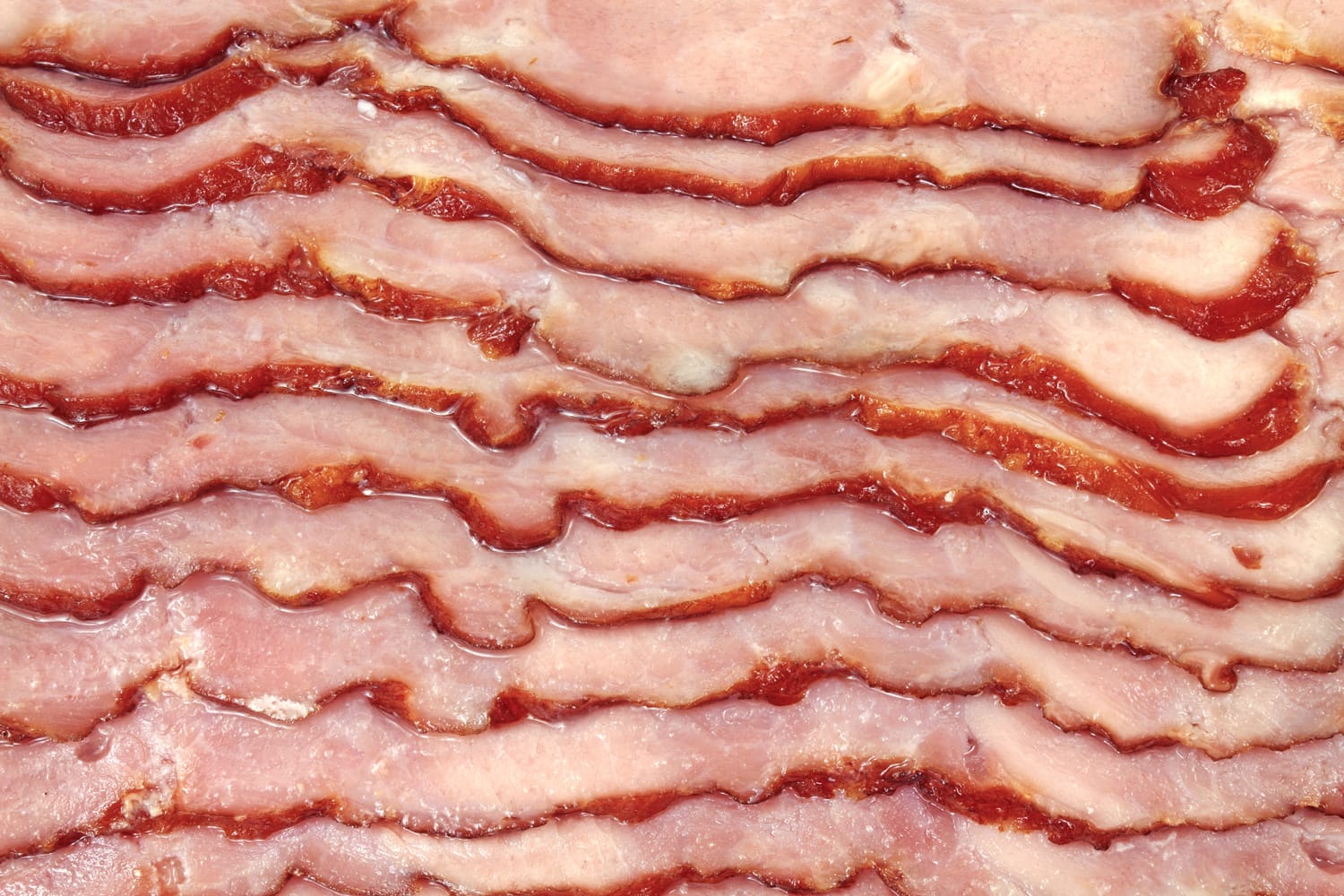 Before you throw the bacon away, it's helpful to know why bacon can have that slimy feeling. There are many reasons why it could feel that way. Some of them are issues that aren't too concerning. The others could give you a reason to avoid using it at all.

So, why would the turkey bacon feel slimy? It could be because of the vacuum sealing process. Turkey bacon packaging isn't the same as other types of meat.

Some brands might use hot water in the vacuuming process. Thus, it pushes juices and natural liquids out. Consequently, these juices gelatinize. When it cools, it becomes solid and feels slimy.

That's one of the minor reasons your turkey bacon is slimy.

The other minor reason the bacon is slimy is because of congealed fat. This one applies if you've cooked the bacon and put it in the fridge. Though, there is a distinct difference in texture.

Sliminess would describe bacon that is slippery, somewhat sticky, and mucous-like. If it's a simple case of congealed fat, the correct texture description would be greasy or buttery. Washing or scrubbing the bacon at that point won't do anything.

If it's truly just fat, reintroducing it to heat will allow it to melt. Once the fat melts, the bacon will reabsorb it.

The discoloration of meat is usually a sign that it is spoiling. Though, sometimes it's not as simple as it seems. Turkey bacon has a low chance of developing an iridescent green film. Some would describe it as slimy.

If your turkey bacon seems safe to consume, but some areas are green and slightly slimy, it could be nitrite burn. Mass-producing turkey bacon isn't as simple as using meat and salt.

It needs to use preservatives. Turkey bacon typically follows the same formula as regular bacon. Thus, it contains chemical preservatives, which include nitrates and nitrites.

The green film develops when the nitrite in preservative salt meets and reacts with the myoglobin from the meat. In the presence of oxygen, it forms nitrihemin.

Is it safe to eat? Some would suggest throwing it out and getting a new package of bacon. Others would describe it as harmless. In any case, you shouldn't risk foodborne illnesses.

The last possible reason your turkey bacon is slimy is because of lactobacillus bacteria. The slime appears when the bacteria feasts on the sugar that some manufacturers add to the bacon for flavor. Again, there isn't a definitive answer to decide if it's safe to consume.

Some would describe it as harmless as long as there's a minimal presence of the slime. If there's an excess, a foul odor will accompany it. In this situation, it's possible for bacteria that cause foodborne illnesses to be present.

Therefore, it would be best to avoid consuming the product if that's the case.

How Can You Tell When Turkey Bacon Is Bad?

Slime is one visual cue that the turkey bacon you have is spoiling. Though, slime isn't the only way to tell if it's bad. There are other ways to confirm that it's definitively not safe to consume.

So, let's go over the other tell-tale signs below:

Slime is one indicator. The discoloration of the meat is another. Some people aren't scared off by slime itself. The color of the turkey bacon can give you another reason to avoid consumption.

Right out of the packaging, good turkey bacon has a pink color. It's not too bright or too pale. It won't have too many white spots like bacon from pork because it's lower in fat.

You'll know the turkey bacon is spoiling when that pink color turns gray or brown. It's a slow process. But, it's noticeable enough to make you question the quality. 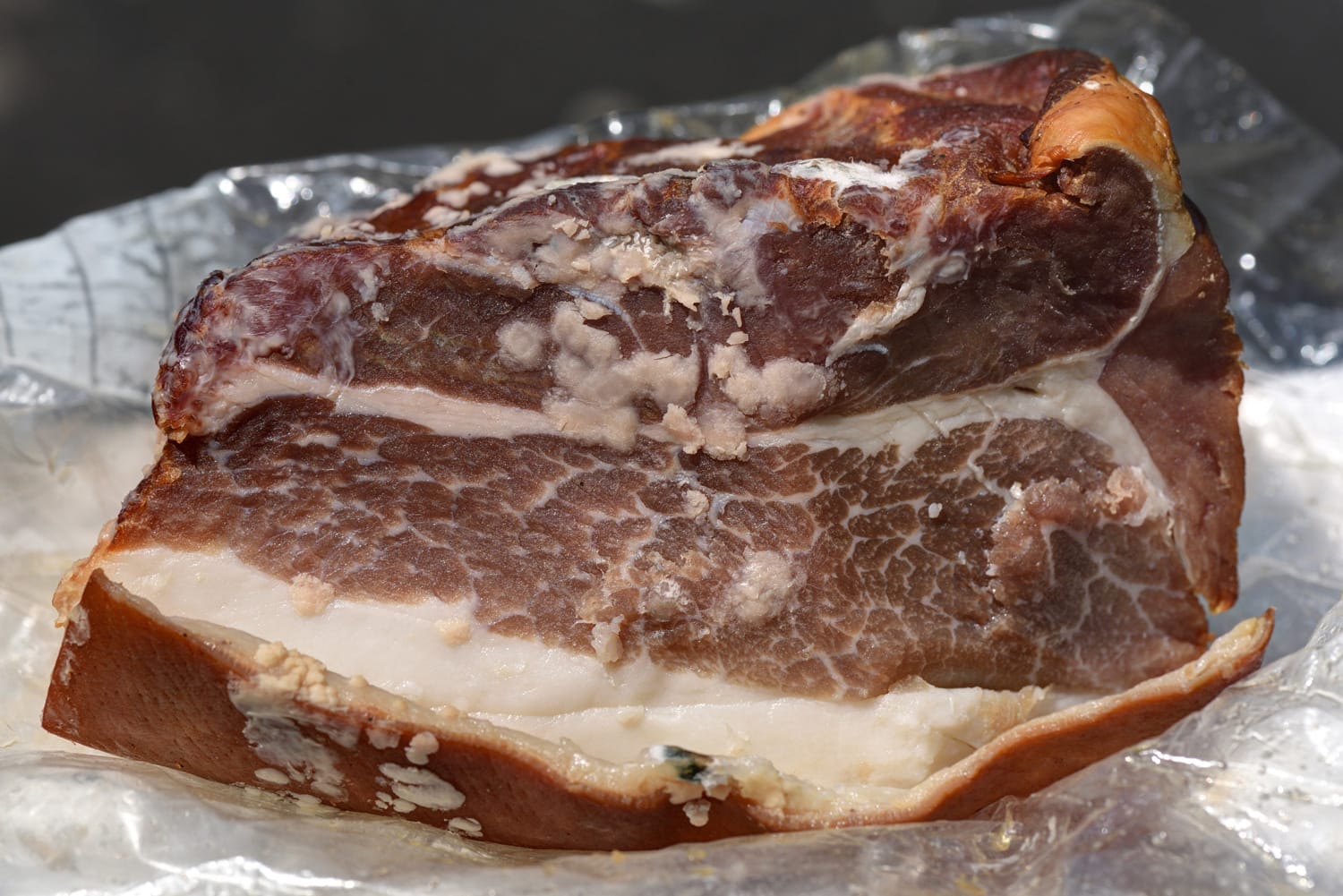 It's spoiled if there are blue or green spots on the meat. However, if the bacon is slightly brown, it could still be edible. The only way to make sure is to go through more tests.

Bacon should have a natural meat odor. It smells similar to bacon. But, it carries its distinct aroma.

When it goes bad, it's nowhere near the smell of fresh turkey bacon. Instead, it will carry a sour or rancid odor. That smell is hard to miss.

It's enough to make anyone pinch their nose and turn their head.

Although it's tough to describe textures in writing, feeling bacon is a much different experience. What you consider slimy might be greasy to some.

So, it's best to go over every little detail. The slime itself might not be concerning. However, if it's also sticky, that's not a good sign. It can also be gooey.

Standard turkey bacon should feel soft, slightly squishy, and tender. There will be hints of moisture over it. However, it shouldn't feel slimy.

You'll know when to avoid consuming the bacon when there's an overwhelming amount of slime. So much so that it can cover entire slices of turkey bacon. At this point, it even looks unappetizing.

If that's the case, avoid trying to clean it off. It would be best to wrap it. This way, pets won't be able to get a hold of it. Then, throw it away in the garbage.

How Long Is Turkey Bacon Good In The Fridge?

As it is with all meat, turkey bacon has an expiration date. Of course, when it goes past it, you generally want to avoid consuming it. Otherwise, you might get foodborne illnesses.

As soon as you open the packaging, it's best to consume it within a week. Ten days is stretching it. Cured turkey bacon might last longer than that. However, the longer you wait, the more likely it will spoil.

You could always use visual cues and smells to determine if it's safe to consume. It's generally not advisable to eat any turkey bacon older than a week out of the packaging. If in doubt, throw it out.

After all, if it's sitting in the fridge for more than 7-10 days, it's probably not going to taste as good as fresh bacon. Regardless, it's all up to you to decide what you want to do.

How Long Does Unopened Turkey Bacon Last In The Fridge?

The best way to ensure food lasts is to keep it in the packaging. This way, it's airtight. So, the conditions will remain the same.

It's nearly impossible to introduce anything that can harm you into the bacon. Still, it's meat. Thus, it will eventually spoil, even if it's vacuum-packed.

Unopened packages of turkey bacon should last around two weeks. If you want it to last even longer, unopened turkey bacon can last up to eight months in a freezer. However, the flavor and quality will become questionable over time.

When Shouldn't You Eat Unopened Bacon?

Although bacon is typically vacuum-packed, that doesn't mean air or gases can't get inside. There is an instance where you should avoid consuming it.

You can check by squeezing the packaging first. It should be stiff if it's vacuum-packed. However, packaged bacon that is contaminated will feel squishy.

The squishiness is most likely from the existence of gas within the packaging. Accordingly, it could be a sign of microbial activity. If there are no punctures, openings, or holes on the packaging, the gases are introduced from within.

It's a clear sign that there might be something wrong with the bacon. Thus, you should avoid consuming it.

Can Turkey Bacon Make You Sick?

Meat, even if cured, does have a chance to make anyone sick. For this reason, you should always avoid eating any bacon that smells off, shows discoloration, or shows an excessive amount of slime.

Even if it's still fresh, eating raw turkey bacon can make you sick. Some suggest food poisoning or, even worse, salmonella poisoning are two illnesses you can suffer.

It's always better to play it safe when dealing with any meats.

There are several reasons turkey bacon can be slimy. Sometimes, it might not be slime at all! In any case, it's always better to inspect the item thoroughly. This way, you won't have to spend a few days bed-ridden.

Before you go, do you have other bacon concerns? Do you need advice on choosing a pan to cook it on? To learn more, check out:

What's The Best Type Of Pan For Cooking Bacon?

Do you want to reduce the fat and calories of it? Microwaving it can help! For more information, check out:

How Long Can You Leave Water In A Keurig Reservoir?

Can Chocolate Get Moldy? [And How To Store It]

5 Ways To Crush Ice Without A Blender