Are you interested in making your own twice-baked potatoes but aren't sure exactly what they are? Well, you've come to the right place. We've put together this guide to explain just what a twice-baked potato is and provide some tips to help your first attempt be a success.

Twice-baked potatoes are potatoes that are baked until they are fully cooked, then they're removed from the oven, and the potato flesh is scooped out and mixed with other ingredients. After the mix is completed, it is placed back into the potato skins and baked a second time.

So what do you mix with the potato flesh? And how do you keep the potato skins intact? Keep reading to learn all about making twice-baked potatoes and to learn some great tips. 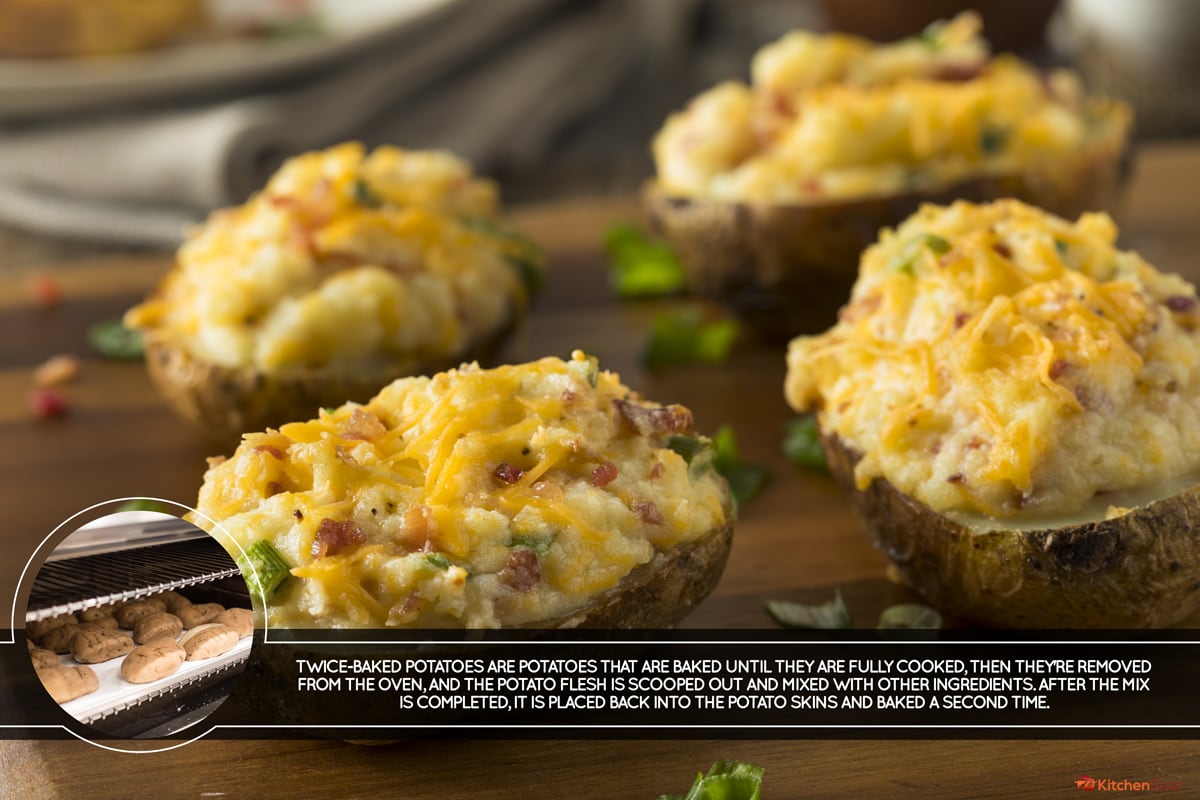 Are Twice-Baked Potatoes Hard To Make?

No, twice-baked potatoes aren't too difficult to make, and after a couple of attempts, most people get the hang of it. The toughest part is keeping the potato skin intact and capable of being refilled. Most beginner-level home cooks can easily learn to make twice-baked potatoes.

How Do You Make Twice-Baked Potatoes? 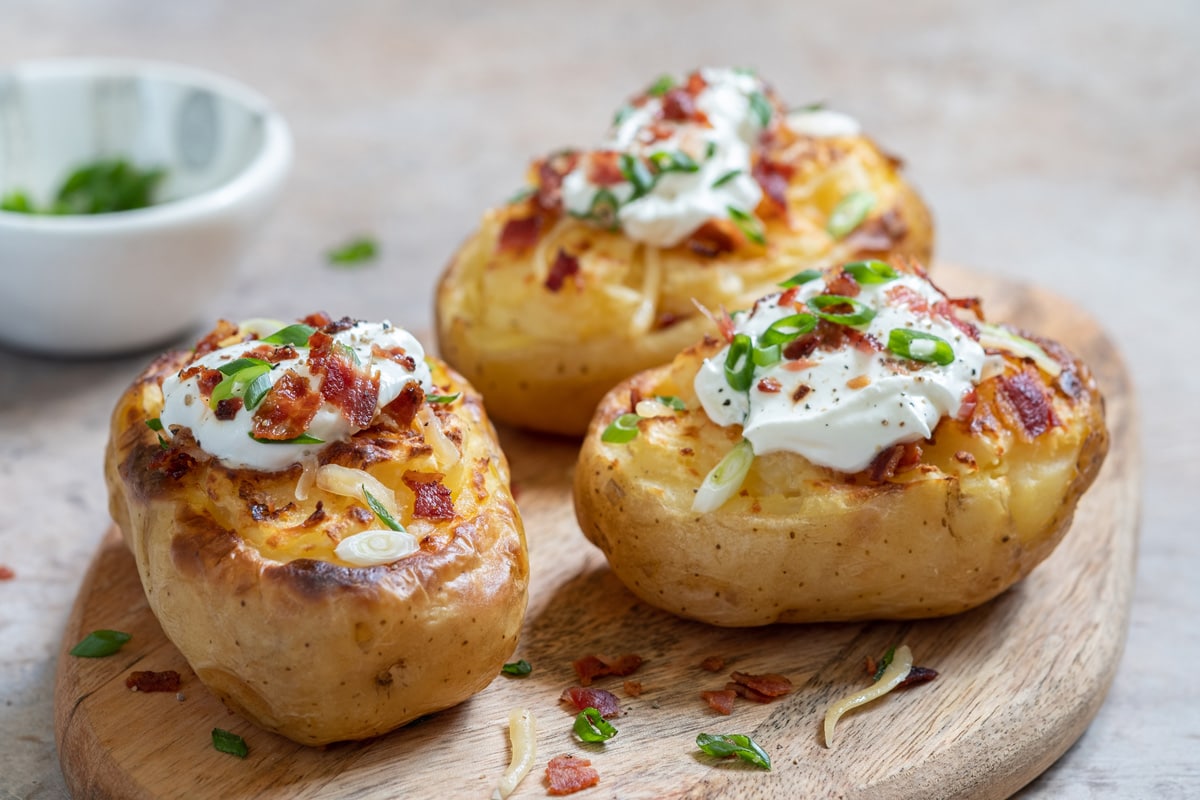 Once cooled, slice the potatoes in half lengthwise, and scoop out the cooked white flesh, leaving a thin layer to help hold the shell together.

Put the potato flesh into a mixing bowl, and add what you would like, then mash the ingredients together until well combined. Place the mixture inside the emptied potato skin shells, and place them back in the oven for 20 minutes.

This potato masher is designed to make mashing easier and more comfortable while also prioritizing the durability of the tool. It's also dishwasher safe for quick and easy cleanup and rust resistant for longevity.

Click here to check out this masher on Amazon. 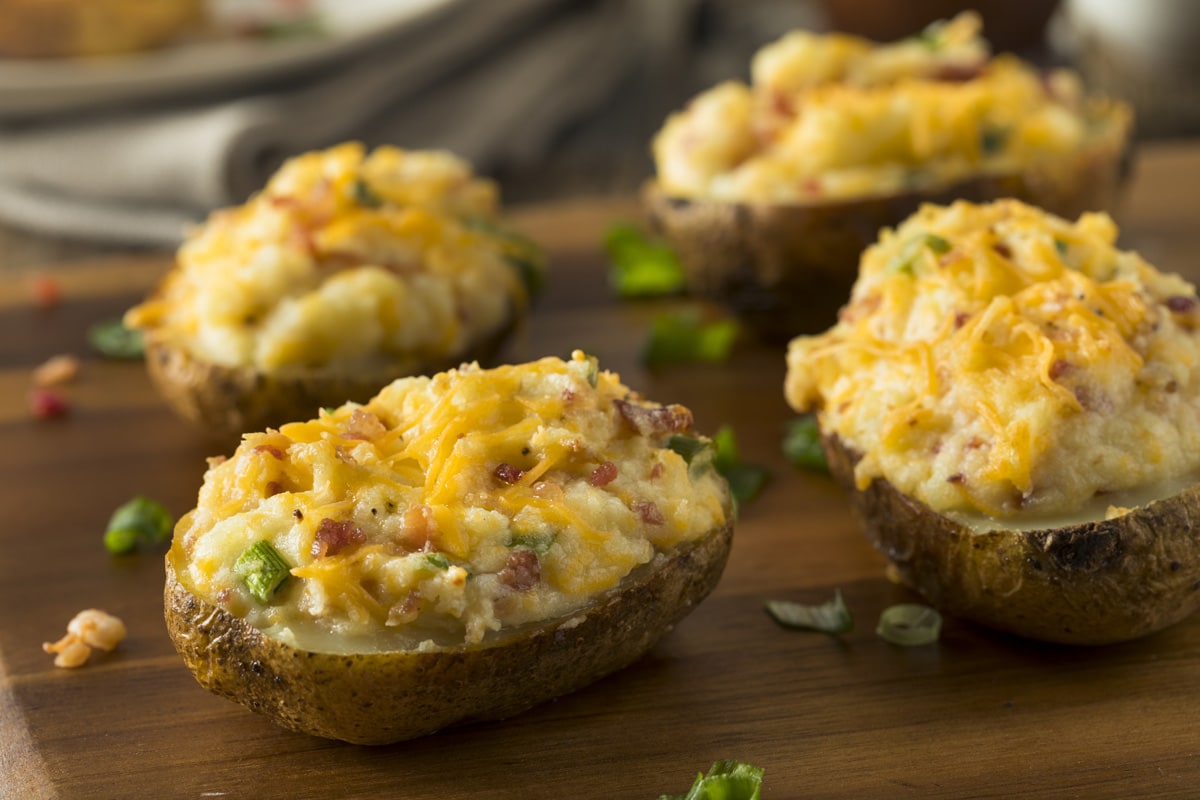 To get you off to a great start, we've gathered up a handful of highly rated twice-baked potato recipes that are great for beginners. We've included something for everyone:

This recipe calls for 8 large russet potatoes baked for one hour at 400F.

Scoop out the centers of the potatoes into a mixing bowl, and add 1 cup of milk, 2 sticks of softened butter, 1 cup of bacon bits, 1 cup of sour cream, 1 cup of shredded cheddar cheese, 3 chopped green onions, 2 teaspoons of seasoned salt, and 1 teaspoon of black pepper.

Mix these ingredients together well, and then stuff the potato shells with your mixture and bake them at 350F for 20 minutes until hot.

This recipe is basically a whole meal on its own and requires a rack of ribs for protein. Start by placing your 1 1/2 pounds of boneless rib meat in a slow cooker, pour in a large bottle of your favorite BBQ sauce, and let it cook for 8 hours on low heat.

When fully cooked, remove the meat from the slow cooker and shred it, then put it back in and keep the cooker set to warm.

Bake 6 russet potatoes for an hour at 400F, and then scoop the insides out into a mixing bowl. Add 2 tablespoons of butter, 1/4 cup of ranch, 1/2 a cup of sour cream, 1/4 cup of chopped green onion, salt and pepper to taste, and cheddar cheese to taste.

Mix the ingredients together, and then fill your potato shells with the mixture and bake them for an additional 20 minutes at 350F.

Bake 8 large russet potatoes coated in olive oil for an hour at 400F. Scoop out the centers, and put them in a large mixing bowl with 3/4 cup of butter, 2 1/2 cups of shredded cheddar cheese, 1 cup of heavy whipping cream, 1/2 a cup of sour cream, 1/4 cup of shredded parmesan, and salt and pepper to taste.

Combine well and then spoon the mixture into the potato shells and bake for another 2o minutes at 250F.

How Do You Thicken A Twice-Baked Potato?

If the filling for your twice-baked potato is too runny, then you probably added a little too much milk, butter, or sour cream.

But don't worry, you can still save it! Simply add some cornstarch, flour, or powdered milk to help thicken the mixture back up. Make sure to add a little at a time, stirring as you go, until you reach the desired consistency.

This cornstarch is a great item to keep in your pantry just in case you need to thicken potatoes, stews, or gravy. It's a great way to quickly add some density to any food that needs thickening.

Click here to take a look at this cornstarch on Amazon.

Why Are My Twice-Baked Potatoes Gummy?

If your twice-baked potatoes are gummy, they are either overcooked or undercooked. It's important to make sure they are cooked through fully after their first session in the oven.

To prevent these problems, ensure the oven is provided with ample time to preheat, and set a timer so they aren't left in too long or taken out too soon.

This kitchen timer is both adorable and effective, and it's available in other cute animal designs too. Never overcook or undercook your food again with help from your new kitchen pal.

Click here to check out this timer on Amazon.

What Can You Use Instead Of Milk To Mash Potatoes?

If you're out of milk and want to make some twice-baked potatoes, don't fret. Try using heavy cream, heavy whipping cream, or half-and-half instead. These products contain a little more fat than most milk, resulting in creamier consistencies when they are substituted.

How Do You Scoop A Twice-Baked Potato? 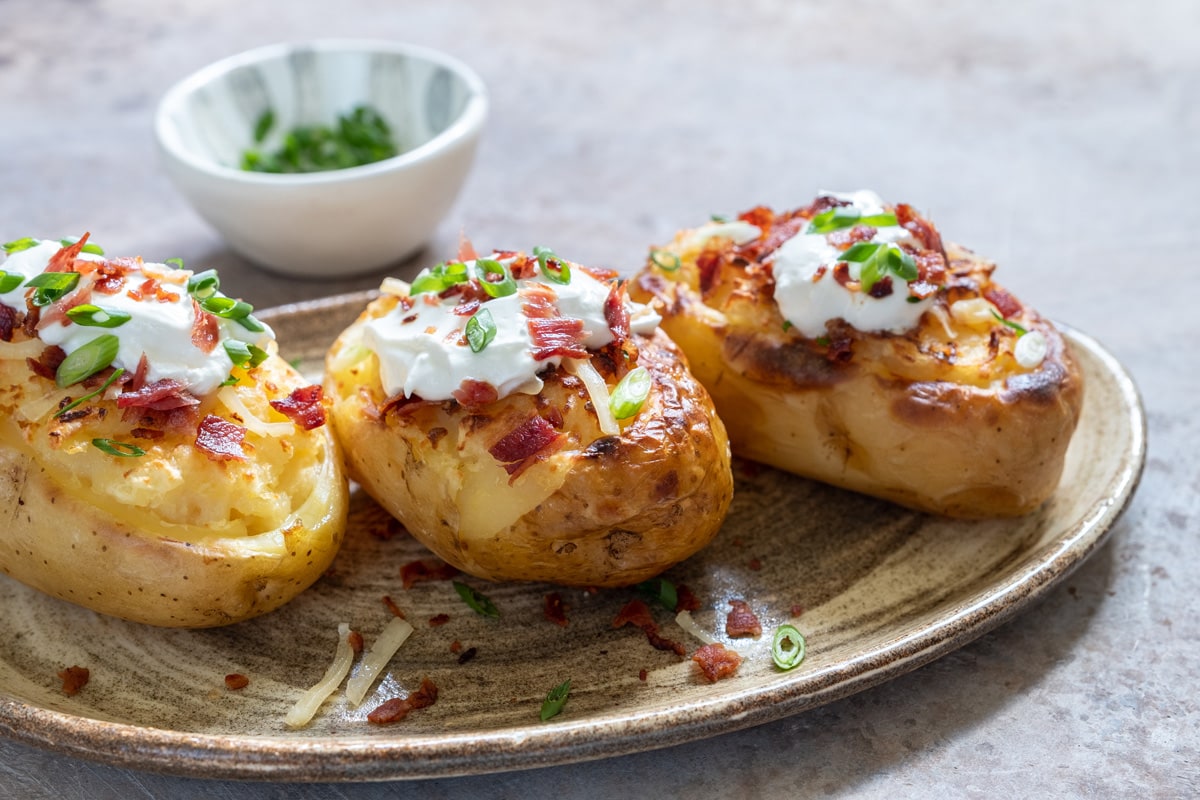 Most people carefully scoop out the centers with a small spoon, being very gentle and careful not to tear the shell.

An avocado slicer would also work very well to scoop out the center and results in easy-to-mash slices that make your work easier. Take your time and be cautious when scooping out your shells, and you'll have good results.

This avocado slicer is a great tool to have around for avocado lovers, but it will also work great to scoop out the centers of twice-baked potatoes.

Click here to check out this slicer on Amazon.

Do You Put An Egg In Twice-Baked Potatoes?

Some recipes for twice-baked potatoes call for an egg, and many recipes have different spices and seasonings than those previously mentioned.

Make sure to explore the different options and the many recipes available online to find your new favorite style of potato. Adding an egg to the potato mixture will help give the filling a fluffier texture, making it a great addition to the ingredients.

Are You Supposed To Eat The Skin Of A Twice-Baked Potato? 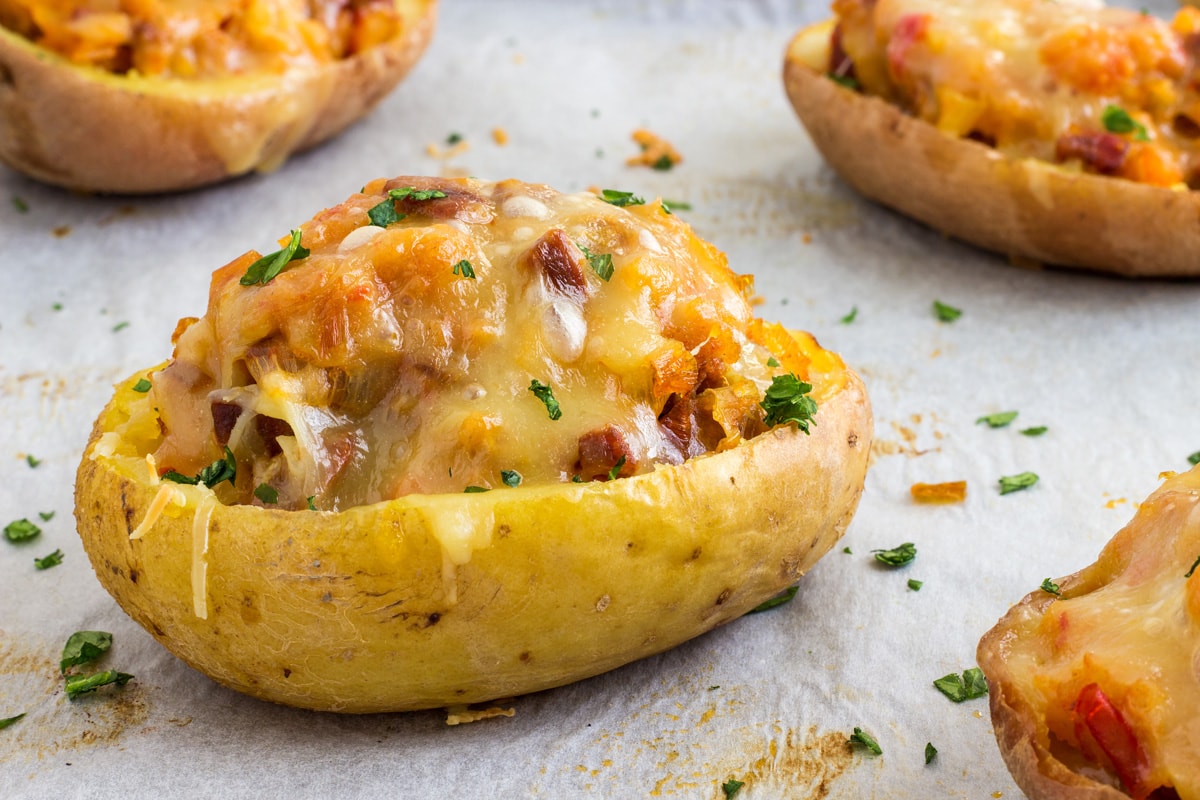 Yes, some people think the skin is the best part. The skin on a twice-baked potato is crispy, salty, delicious, and usually full of nutrients and fiber too. Don't miss out on your twice-baked potato skin; make sure to enjoy the whole thing.

Do I Wash The Potato Before Baking It?

Yes, fresh potatoes should always be thoroughly washed in warm water before being cooked and eaten. Potatoes are root vegetables, which means they grow underground in the soil. Most potatoes still have some dirt on them when they hit the grocery store shelves.

Do not use soap when washing your potatoes. Simply run them under warm water and scrub them a little with your hands or a scrub bush made specifically for veggies.

This scrub brush is the perfect way to clean your potatoes and other vegetables. It works great to thoroughly clean root vegetables, getting into all the tough-to-reach places.

Click here to take a look at this scrubber on Amazon.

Is It Better To Wrap Baked Potatoes In Foil?

No, baking your potatoes wrapped in foil creates a steamed cooking effect, resulting in a less flavorful taste and a wetter, less fluffy texture. Using foil traps the moisture and heat around the potato and steams the vegetable to cook it. Cook your potatoes uncovered and unwrapped to get the best flavors and textures.

Now that you know all about how to make twice-baked potatoes and learned some tricks to make the job easier, you're ready to start collecting the ingredients you'll need to make your recipe.

Don't forget to poke your potatoes before baking them the first time to help them cook evenly, and be sure to preheat your oven. Have fun baking, and enjoy your delicious potatoes!

For help choosing the best kind of potatoes to use when making twice-baked potatoes, read our article What Potatoes Are Best For Baking?

If you're struggling with undesirable textures when making your baked potatoes, read our article Why Is My Baked Potato Hard? to help pinpoint the issue.

Can Pizza Dough Be Left Out Overnight?