Whether you're new to cooking or an old hand at it, you're sure to know that there is more than just one type of potato. Red potatoes, sweet potatoes, new potatoes, and the rest of the hundreds of potato types each have their own distinct appearance and taste. Because of these distinctions, certain types of potatoes are better for specific dishes.

What type of potato is best for French fries? Which one should I use for potato salad? What are fingerlings used for? To best answer these questions, we've scoured the internet so that we can present to you a well-researched list of the twenty types of potato that every cook should know.

The Ranger Russet potato is one of the most recognizable, as it's the one type of tuber that comes to mind when most people think of potatoes in general. Its large oval shape is covered with dusty brown skin, which encapsulates a soft and fluffy interior. The skin itself will become chewy when cooked. The characteristics of the Ranger Russet make it one of the best for making baked potatoes. 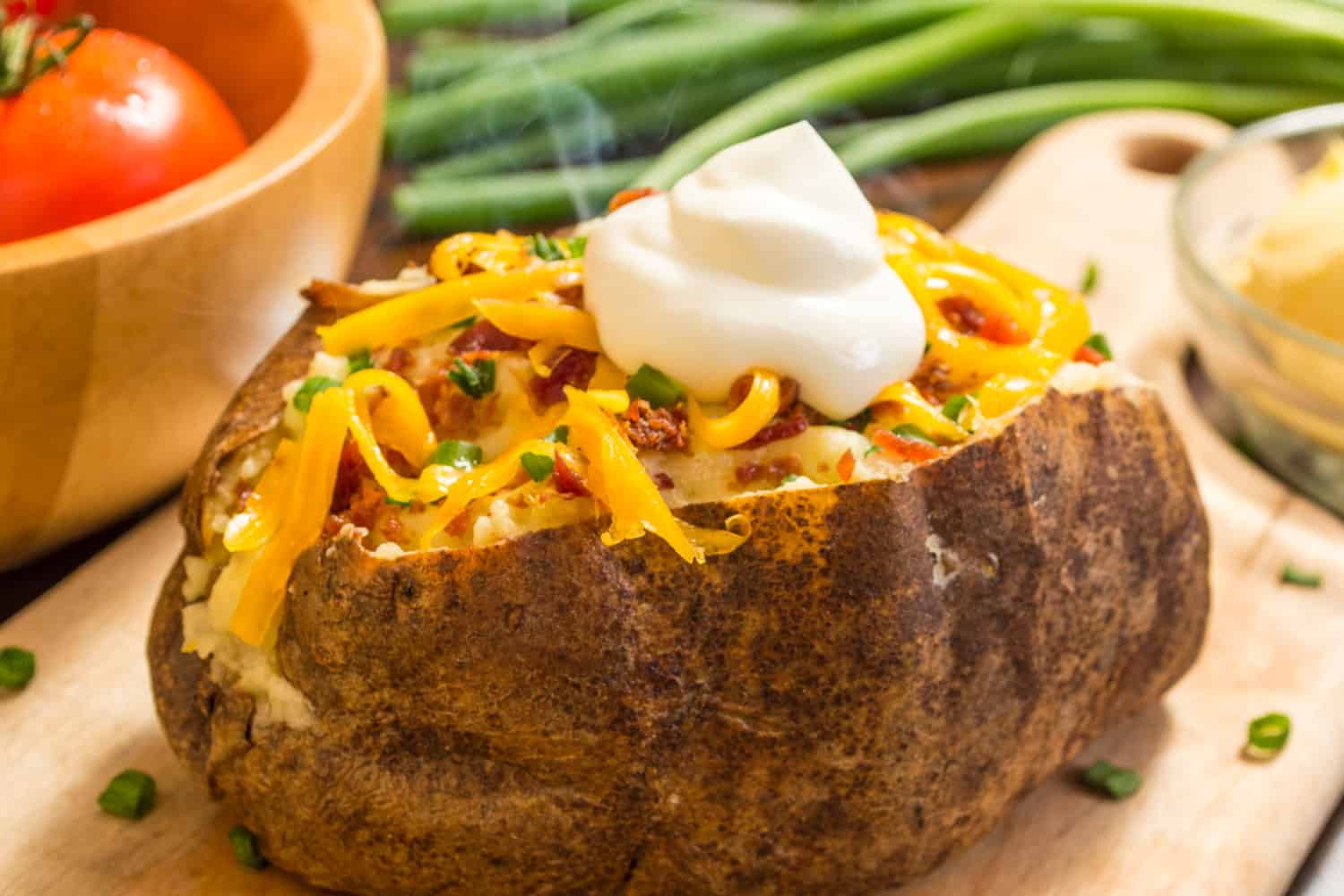 The Yukon Gold potato is one of few tubers considered all-purpose by cooking standards. The yellowish-white flesh of this potato is encased with a thin, yellow skin. The Yukon Gold has a slightly waxy texture and a bright taste that has hints of sweetness. These potatoes are considered all-purpose due to their versatility. They are great for making French fries but are also wonderful potatoes for baking, mashing, pan-frying, or grilling. They grow in abundance, are easily found, and can be purchased inexpensively. 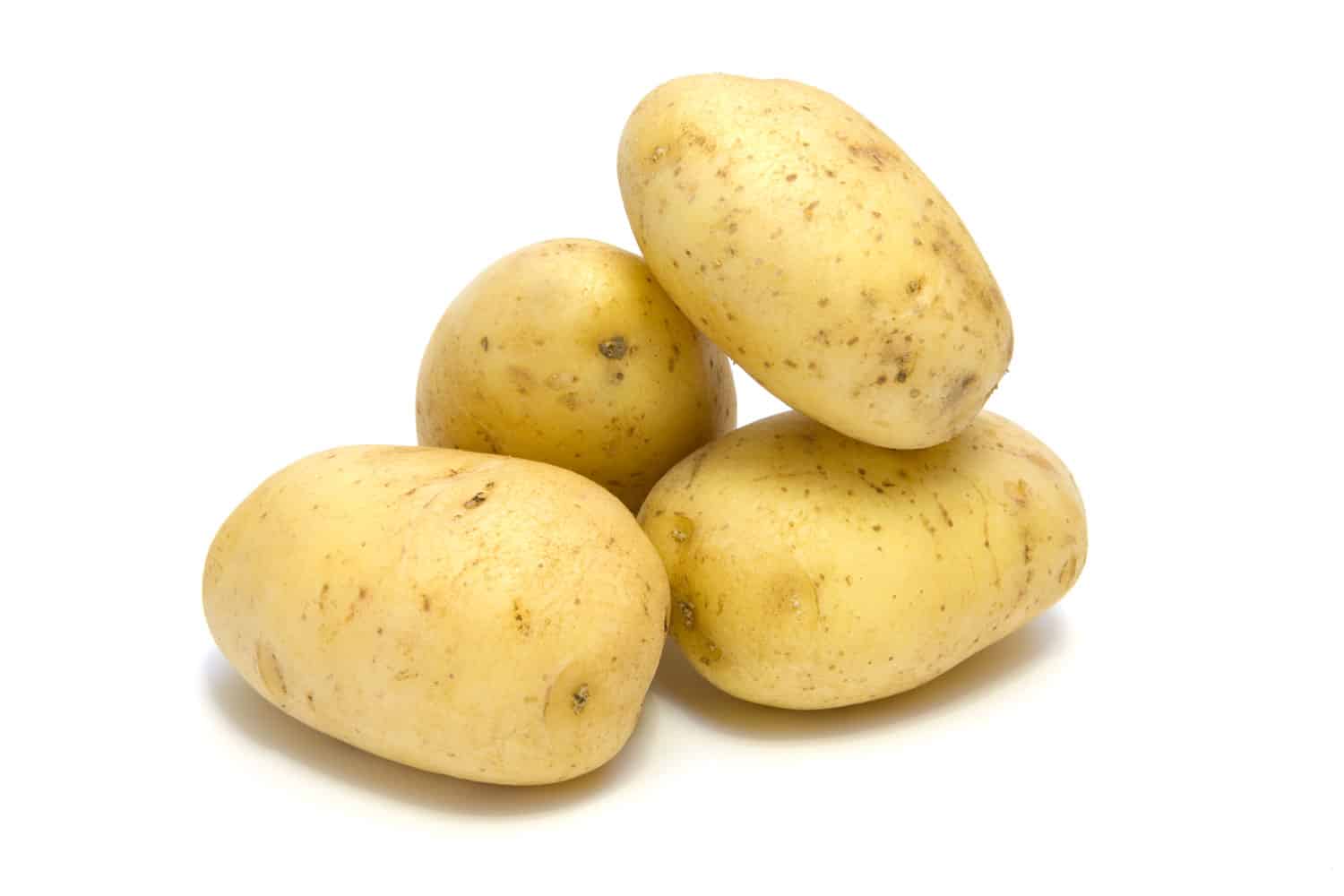 The Purple Peruvian has a deep purple skin and flesh, making it stand out among other potato varietals. These are very high in anti-oxidants and are touted by health professionals as one of the healthiest types of potato you can cook with. They are great as roasting potatoes and can be used in mashed potato recipes and potato salads. 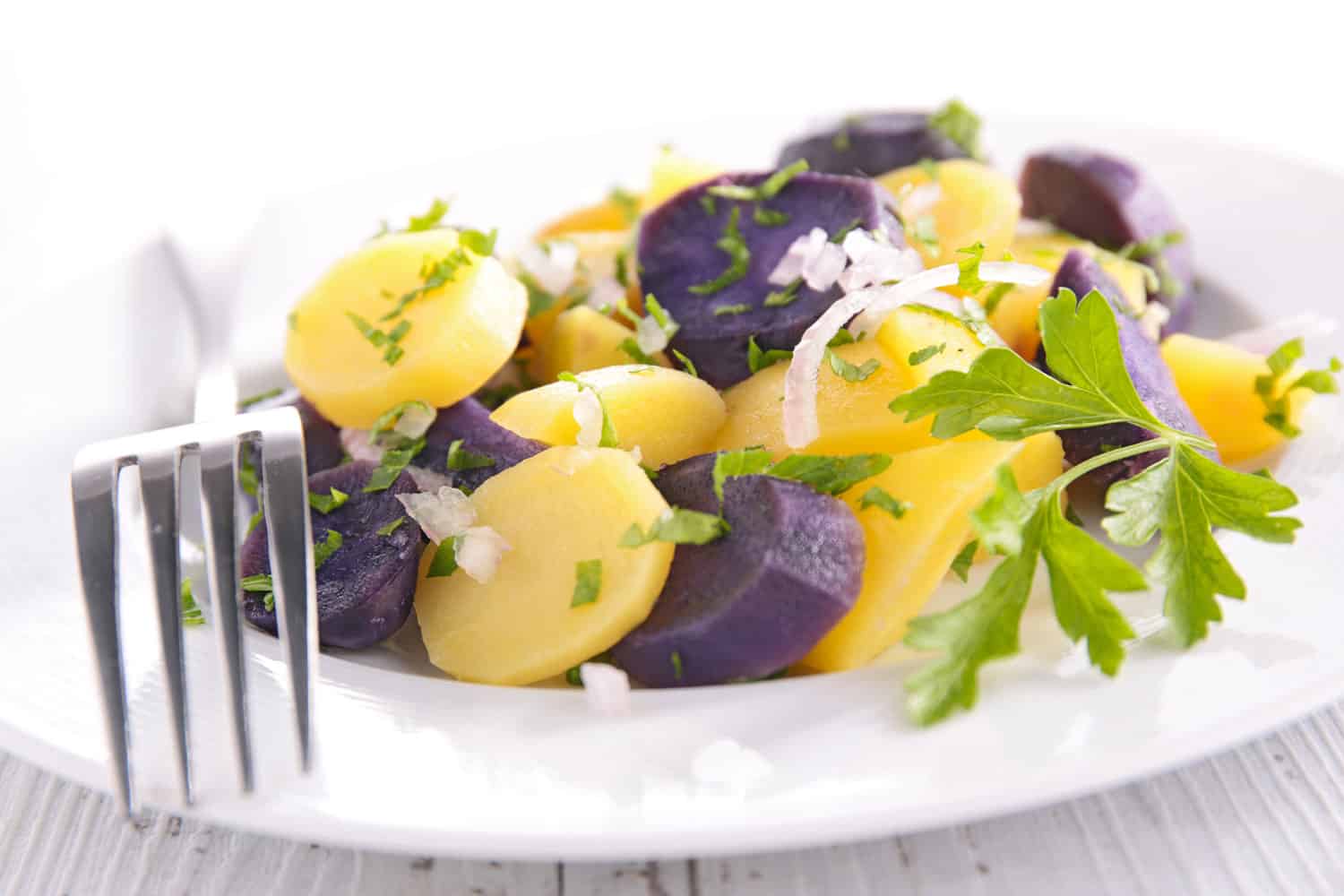 This waxy potato has lighter red skin and white flesh. They are smaller and round in shape. The waxy texture of the Red Bliss makes them great for slicing and frying, as well as for making scalloped potatoes.

This type of potato refers to many varietals of potato that are picked long before they reach maturity. New potatoes, or baby potatoes as they are sometimes called, are sweeter and creamier than they would be if fully grown. They are used in a multitude of ways, including dishes in which they are boiled, roasted, or steamed. These potatoes' thinner skin can be left on and adds a great addition to the overall flavor and texture.

With golden skin and creamy yellow flesh, the Ozette fingerling potato is one of the most flavorful types. These potatoes are long, and a little knobby and have a nutty and earthy flavor profile. This potato is excellent for recipes that call for steaming, frying, or sauteeing a potato. 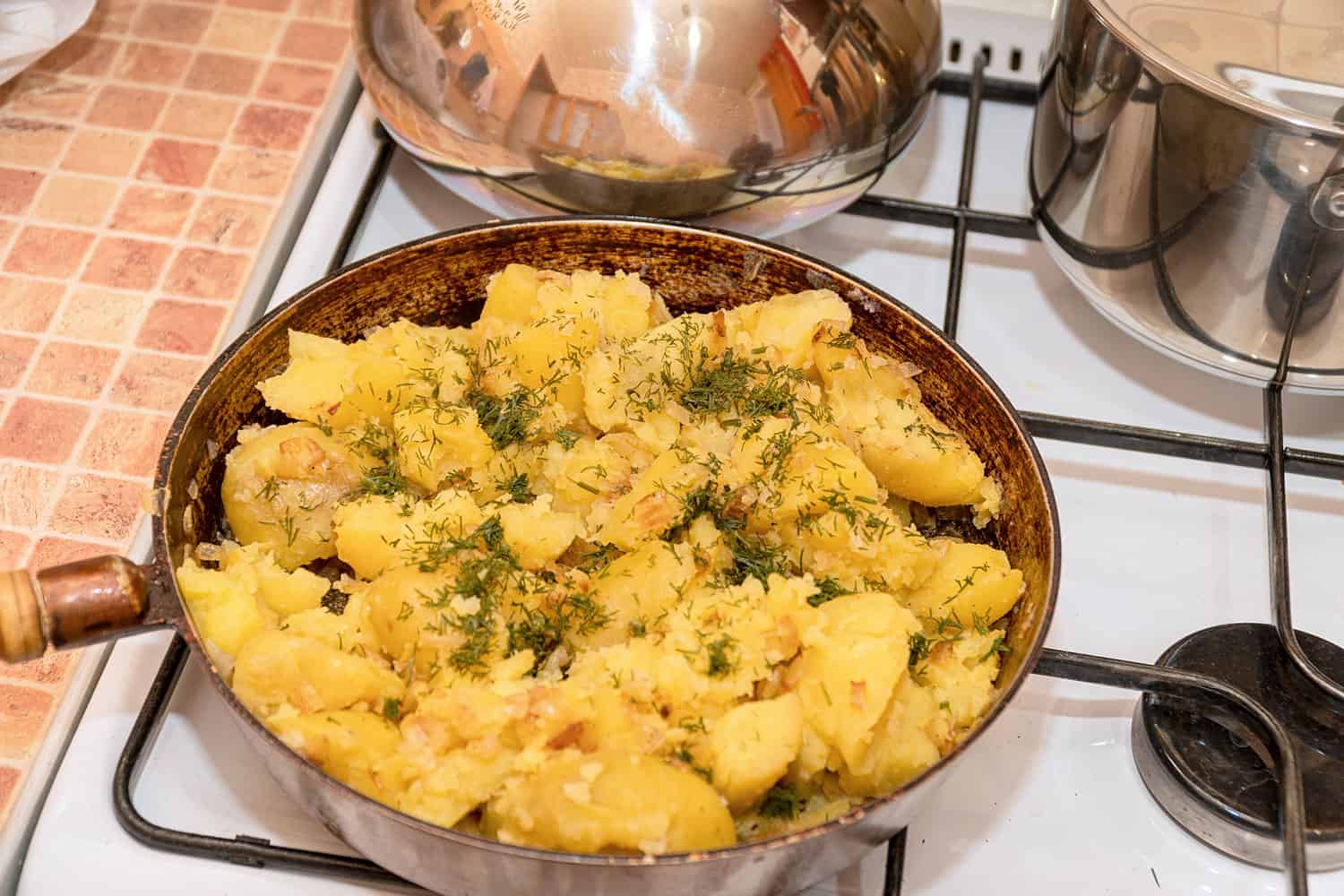 This potato is rich in Vitamin C and other important nutrients and serves as a terrific tuber to make various popular dishes with a twist. Substituting other potatoes for the sweet potato when mashing will present a slightly sweeter and richer side dish. While in a different tuber family than other potatoes, the sweet potato has the appearance and texture of many varietals of potatoes on the market. Their texture makes them not only great for mashed potatoes but also for making house chips and fries.

The variety of tuber known as blue/purple potatoes shows that the Blue Congo's exact origins are unknown. They get their name from their deep blue flesh and bluish skin. The Blue Congo potato is rather large and oval-shaped. They are very flavorful and have a hint of a nutty taste to them. They are exceptionally soft when cooked, making them best suited for mashed potatoes or use in a casserole. 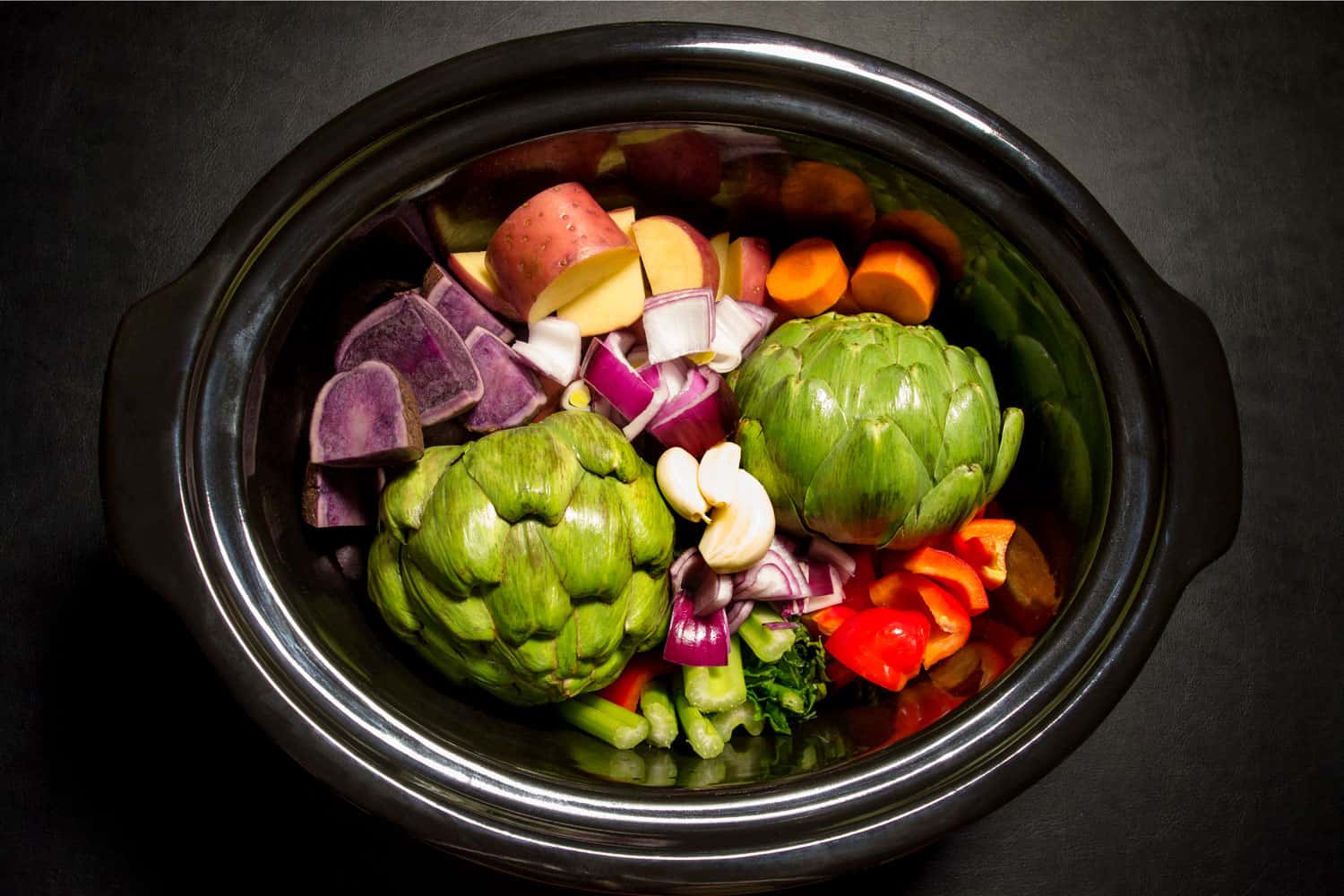 Recognizable by its bright yellow skin, the Gala potato is one of the fastest maturing tubers cultivated. Being ready two months after planting, the Gala is one of the most used potatoes globally. This potato has a smaller starch content than most tubers and very rich in nutrients. They are best used in recipes that call for a potato to be boiled, roasted, or steamed. 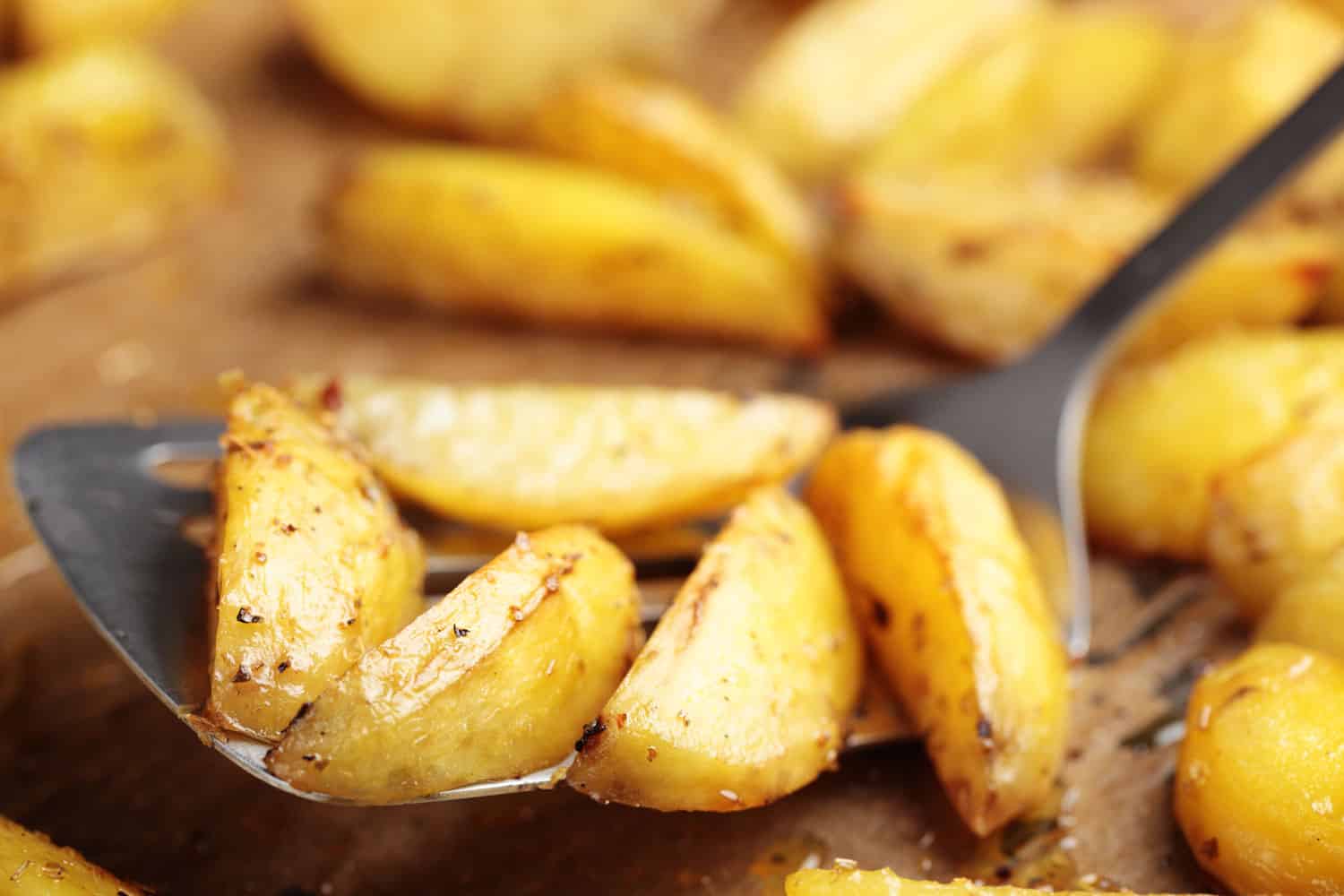 The Maris Piper is the most grown potato in the United Kingdom, mostly due to the higher crop yield. The fluffy and soft flesh of this white potato is cream-colored and encased in white skin. Another versatile tuber, the Maris Piper, makes for excellent mashed potatoes and is also commonly used to make French fries and house chips. This potato's firmness makes it very suitable for boiling, as it retains shape when cooked in this fashion. 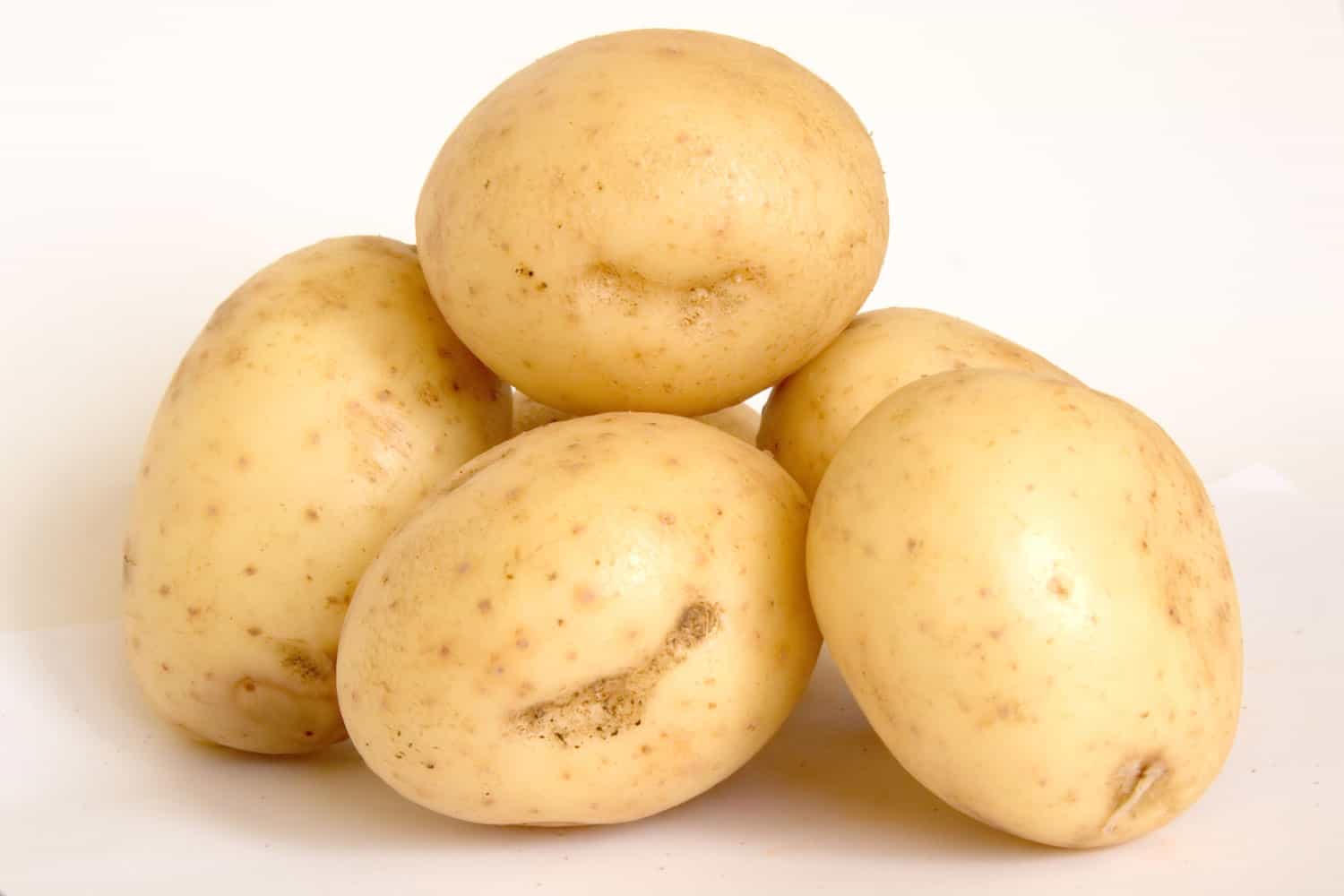 One of the oldest known types of potato worldwide, the Russet Burbank is one of the best potatoes for baking. The long, oval-shaped tuber is covered with brown skin. Beneath the skin is a white and starchy flesh, which has a soft and semi-dry texture. Aside from baking, the Russet Burbank can be used to make decent fries and chips and does well as a roasted potato. 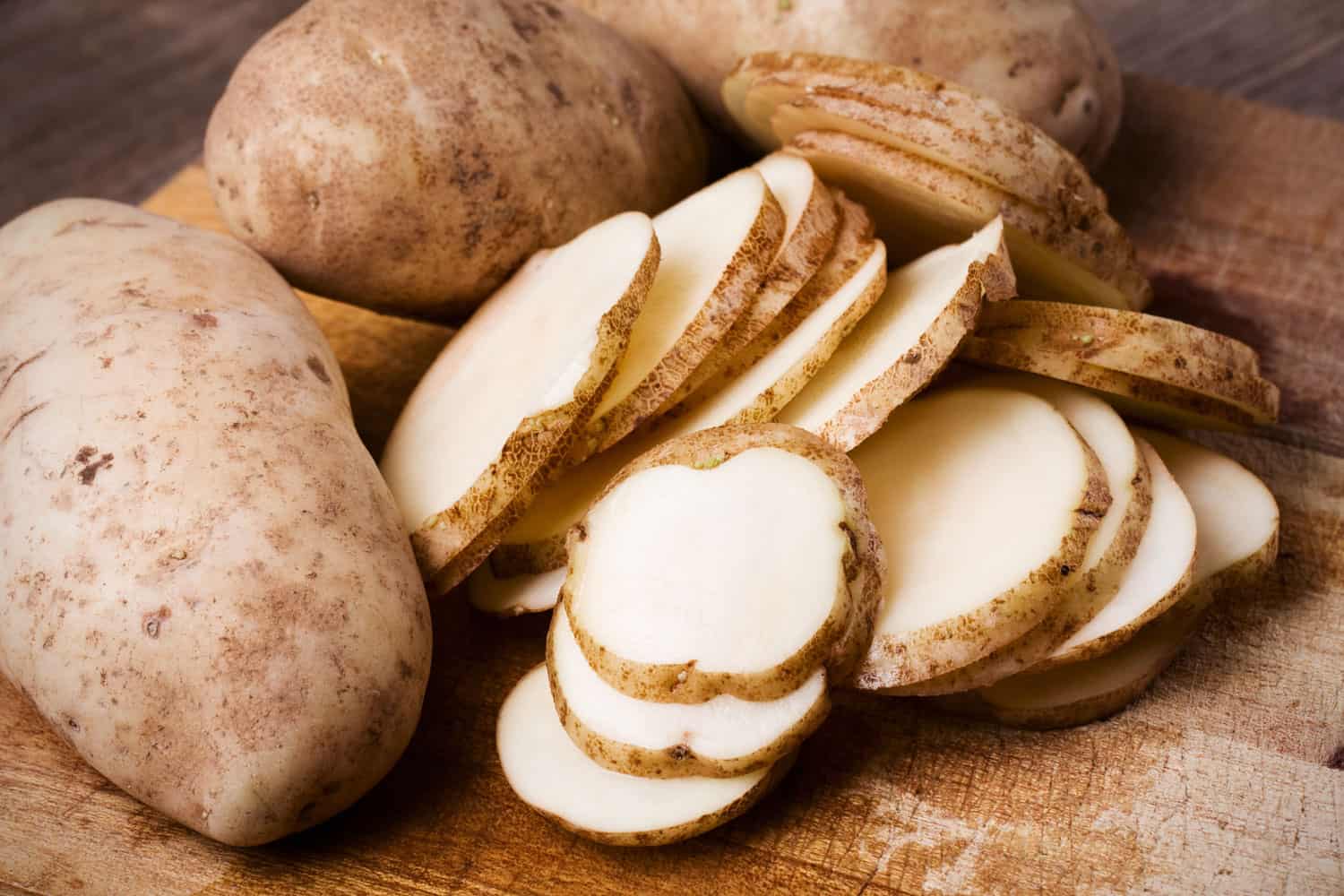 This moderately firm white potato is generally very round. The white skin houses meat that is an off-white color. This potato is oval-shaped, small, and can be used in a variety of ways. It's great for fries, but also bakes, roasts, and mashes quite well. 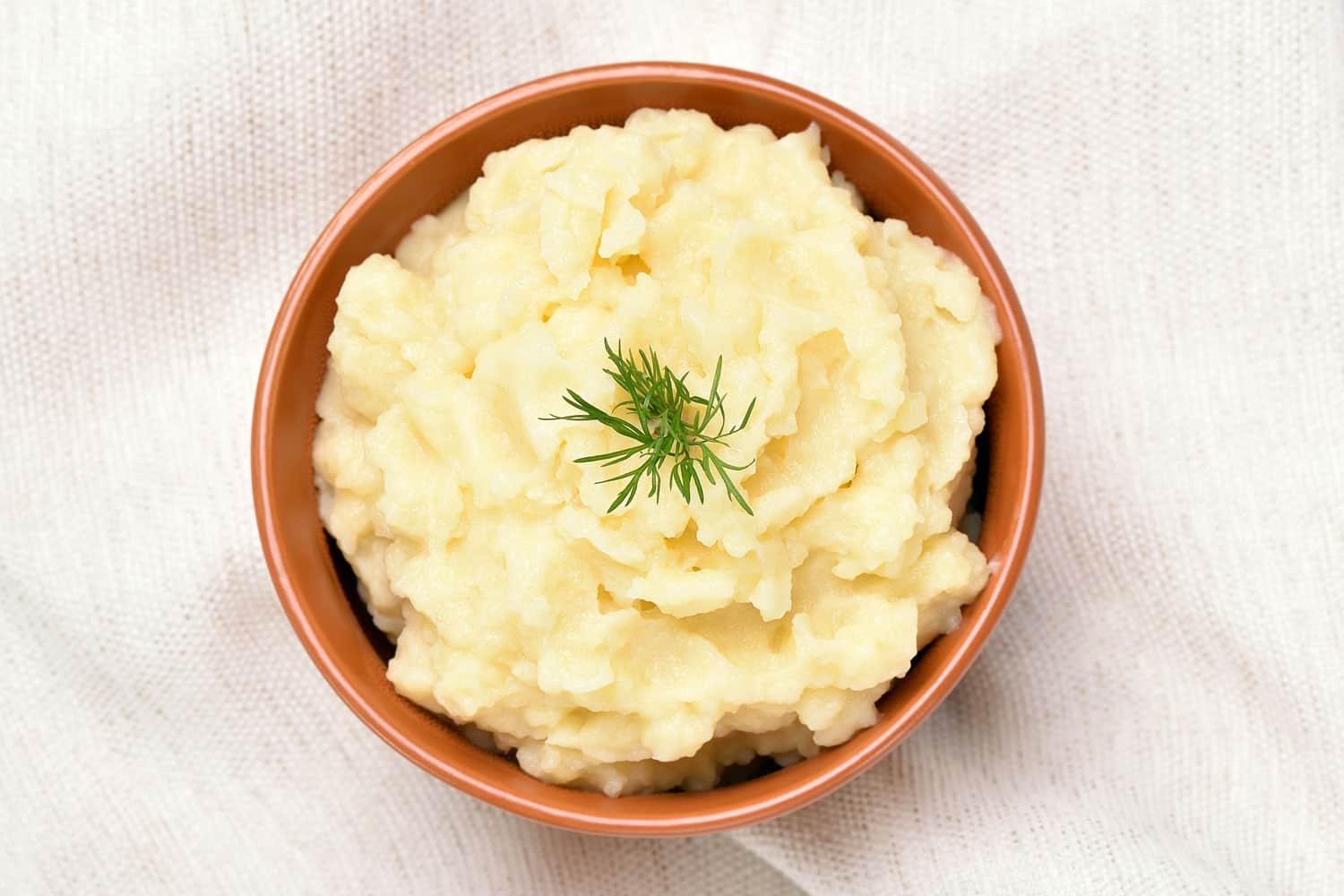 The purple-colored flesh of this potato has helped it rise in popularity, as there is an overall boom in purple-colored crops' sales. Health experts are touting the nutrient-rich qualities of foods this shade, resulting in more beets, turnips, and the like being sold at higher rates than normal. This potato has the size and shape of a fingerling but has an almost nutty taste to it. The texture makes this potato great for frying and roasting, but it also does great in recipes for mashed potatoes. 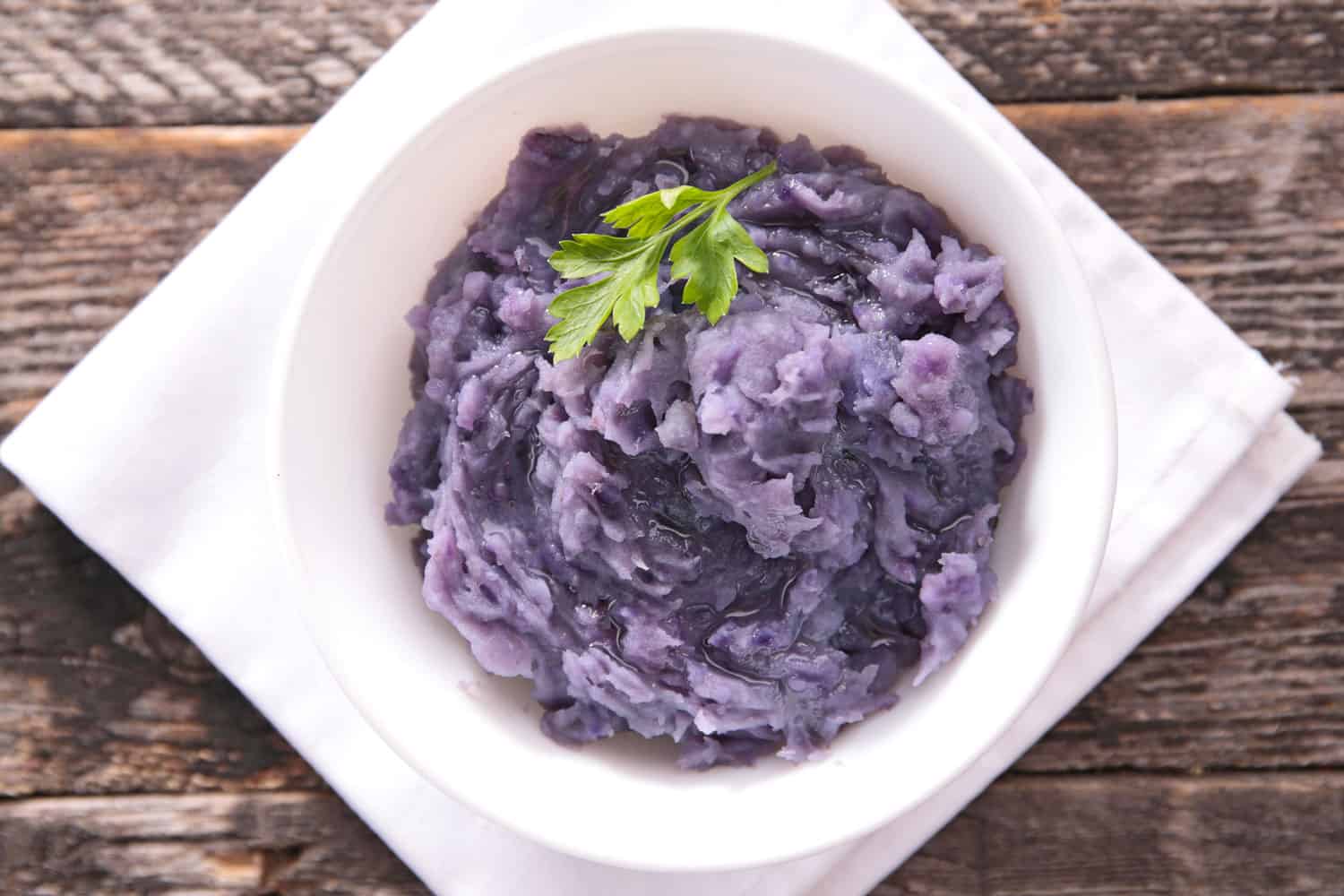 With a texture that is right in between starchy and waxy, the Desiree red potato is among the most popular varieties to emerge from northern Europe. These potatoes are medium-sized and oval. They possess red skin that houses white flesh and stay quite firm when cooked. They are best used to make mashed potatoes, but their versatility makes them suitable for roasting as well. 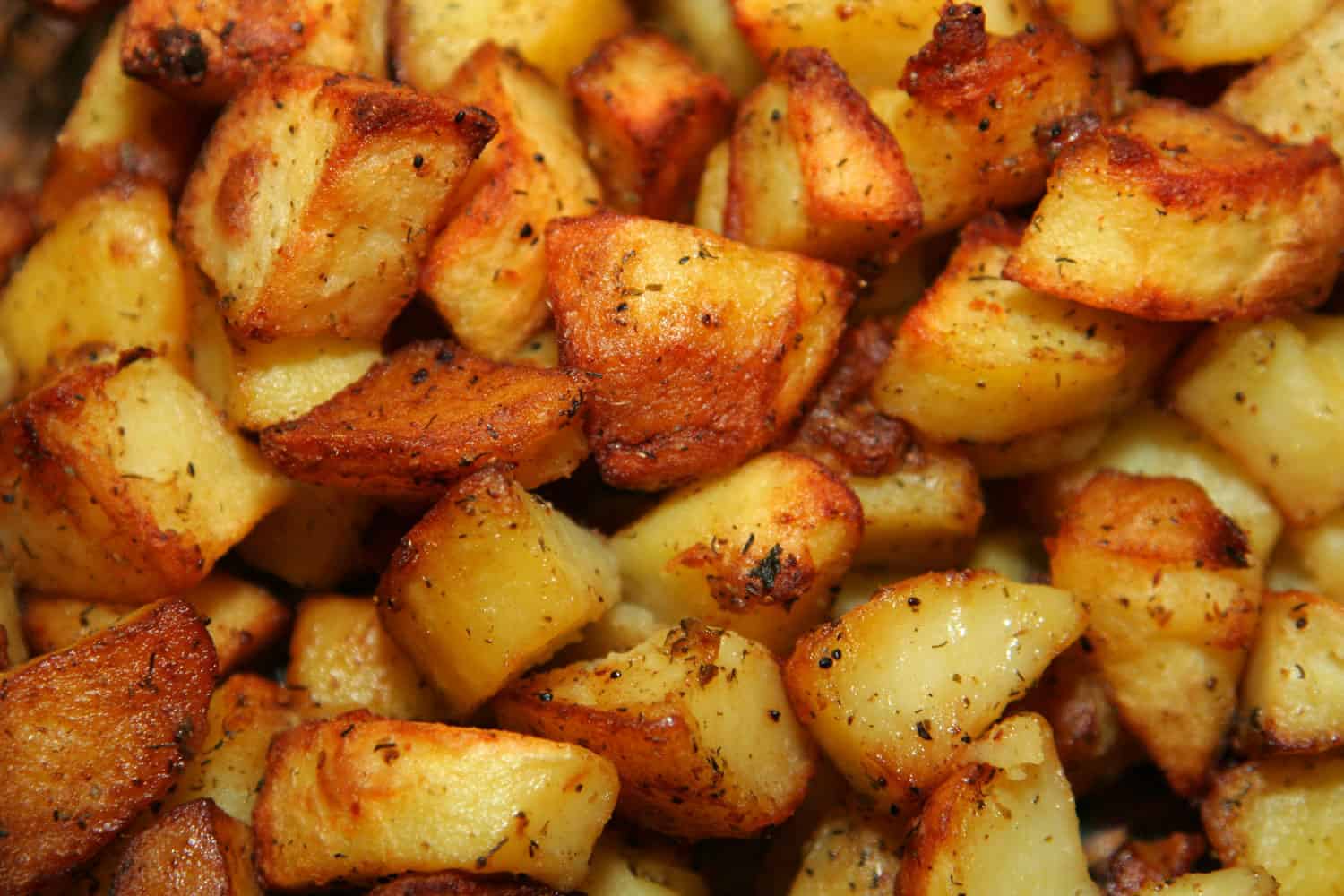 For over one hundred years, the King Edward potato has been used in staple dishes in the US and UK. Named after the monarch King Edward VII, this potato is a little smaller than its contemporary, the Maris Piper. The waxy and creamy white flesh of the King Edward is flavorful and held in by a thin brown skin. This type of potato is perfect for boiling and mashing, although it also is well suited for roasting. 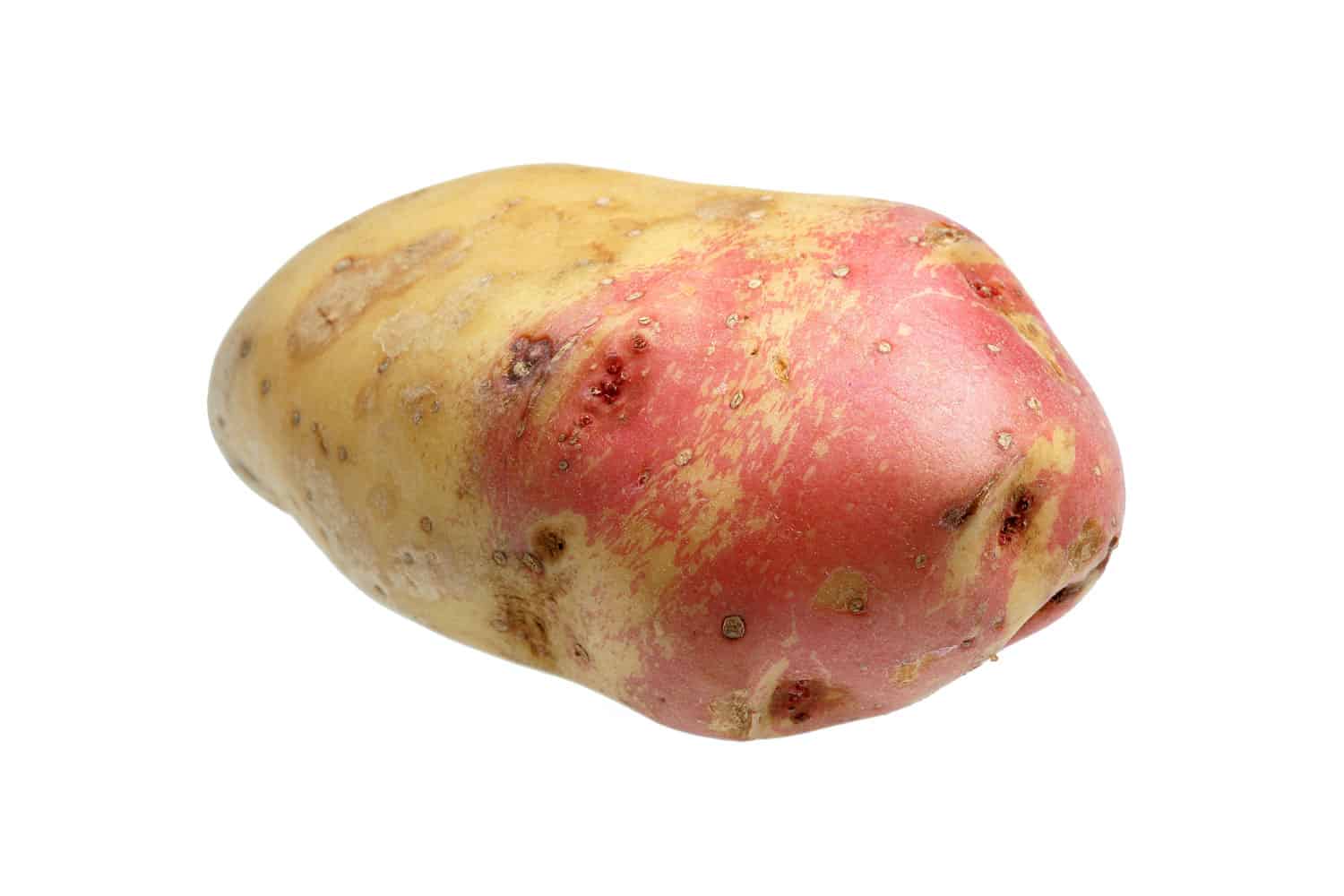 The Charlotte potato is a long tuber with a waxy, light brown skin. This thin skin is best left on when cooked, as it adds to the dish's flavor. A Charlotte potato has yellow flesh with a very firm texture, making it suitable for boiling. This is also a great potato for slicing up and sauteeing. The firmness of the Charlotte also makes it great for scalloped potatoes.

If you want to bake, boil, mash, or roast a great Irish potato, consider getting a bag of roosters. This type of red potato has lighter colored flesh and an oval shape. While they have only been available since 1993, they have soared in popularity. This is mostly due to their great flavor and their availability. Loaded with essential vitamins and minerals, this potato can be a healthy addition to your meals if used properly. 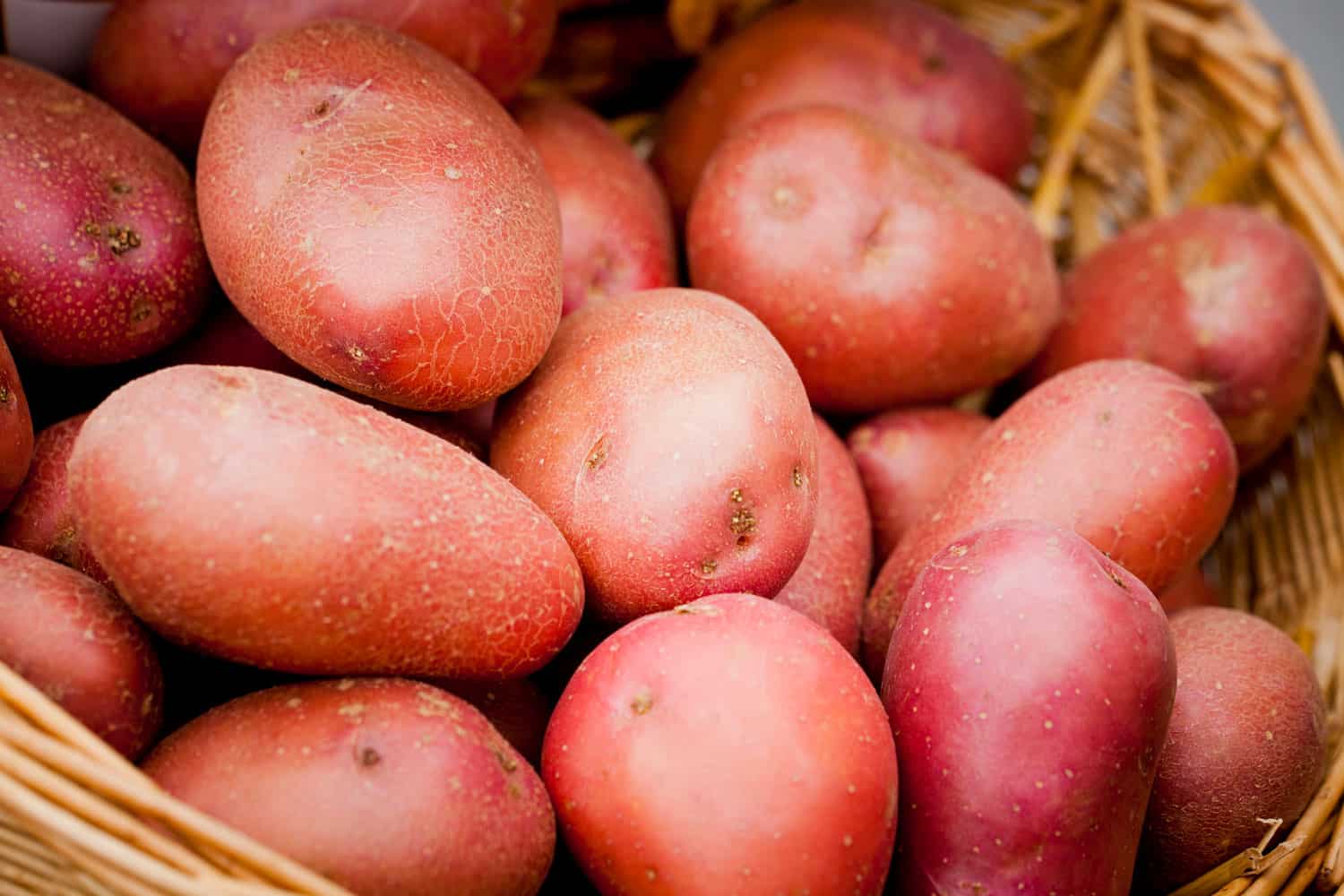 The Ratte has its origins in France and is a well-known varietal of potato among chefs. This potato has pale yellow skin and the flesh to match. A ratte is smaller than the average potato but quite long. They have a very distinct, rich taste, making them one of the best for making boiled potatoes. Unfortunately, these have a meager production yield when planted, making them one of the most expensive types of potato.

The long, thin, and bumpy shape of the pink fir apple potato makes it easily recognizable as a fingerling variety. This potato gets its name from the pinkish color of its skin. The texture of the flesh is firm, and it yields a nutty flavor. This French potato is perfect for a unique tasting potato soup or an ingredient in a vegetable stew.

The Bamberg Russet potato has its origins in Germany, but its popularity has spread westward. A thin brown skin covers the custard-yellow flesh. This type of potato is also very long and thin, much more so than other Russet types. The firm and semi-waxy texture make this potato most suitable for boiling, roasting, or steaming. They tend to soften a bit more than other Russets, so it's not recommended to use this type for chips or potato salads.

Clearly, there are more types of potatoes out there than we can count. No matter which type you select, each is used in various ways and can be found in scores of recipes. Hopefully, this post has shown you the most useful types of potato that can be used for and will help broaden your palate and sate your appetite with something wonderful that you've created in your kitchen.

We hope you found this post on different types of potatoes to be helpful. You may also find the following posts on cooking to be informative:

How To Make Food Not Stick To Pan Without Oil

Does Microwave Popcorn Expire? How Long Does It Last?

How Long To Bake Lasagna