Crispy on the outside and fluffy on the inside, baked potatoes are one of the best things you can do with these tubers. Cooking baked potatoes is easy, and you might be wondering what kind of potato should be used for baking. We will delve into that topic in this post and share with you some tips for making the best baked potato dish for your family.

When making baked potatoes, the best potato to use are Russet potatoes. These potatoes are high in starch and low in moisture, which makes them fluffy and soft after baking. The skin is also thick and it gives the baked potato its signature crispy skin.

We know there are other kinds of potatoes, and you're probably wondering if you can use any of these varieties for your baked potatoes. This is why we will be elaborating on the different kinds you can use to cook baked potatoes in this post. Keep reading as we also give you tips and tricks to creating the perfect baked potato you could ever have. 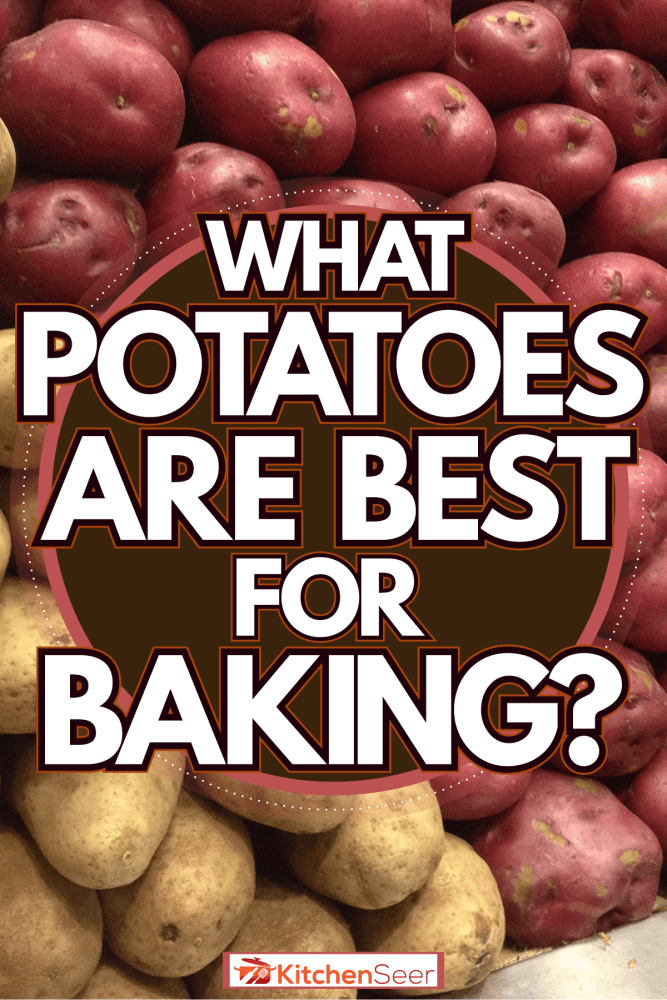 What Potatoes Are Best For Baking?

Baked potatoes are fluffy little pockets of goodness inside a crispy-skinned tuber. Typically, it is served with fillings, toppings, or condiments to give your potatoes flavor and texture. These potatoes are great additions to a rich steak dinner or simply eaten on their own. 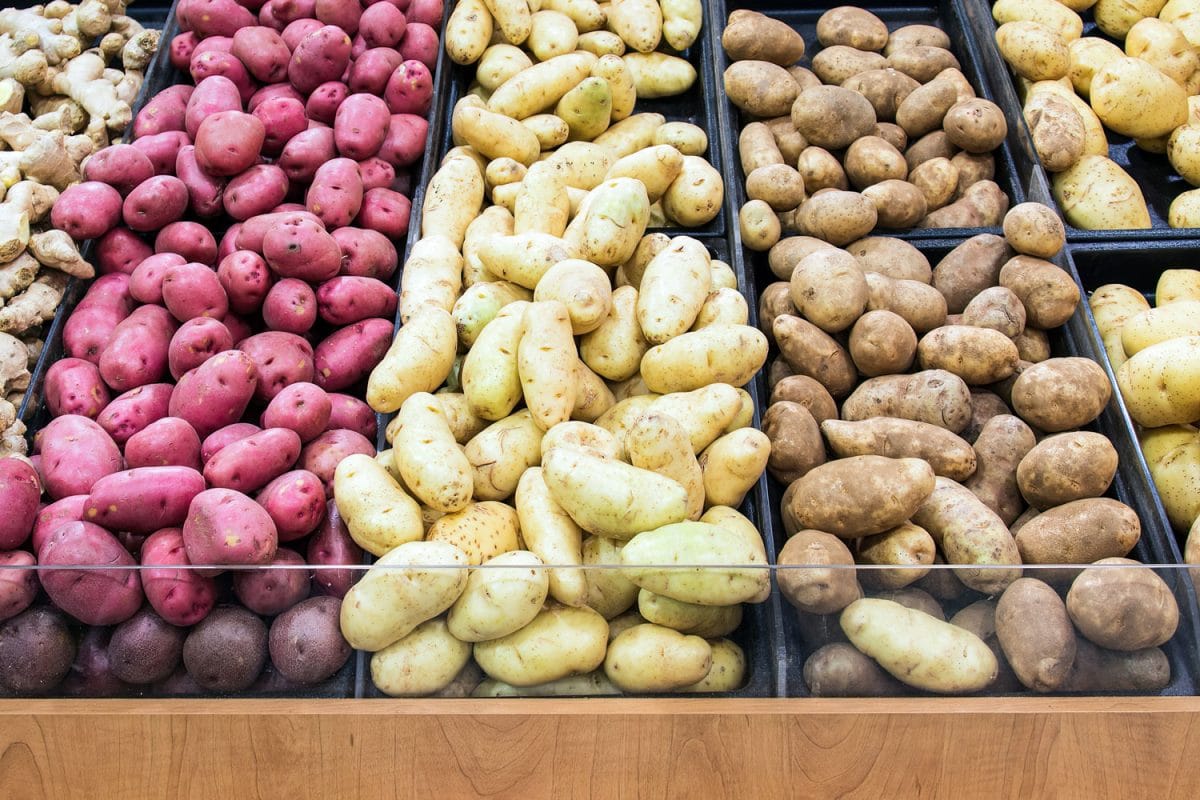 When making baked potatoes, you can technically use any kind of big potato that you have since this cooking method is very flexible. However, to make the best, baked potato, use a starchy potato to get that fluffy on the inside, and crisp on the outside texture. In this case, the Russet potato is the perfect choice to use in a baked potato recipe.

Russet potatoes are great for potatoes because of their high starch content. They are also low in moisture and are very floury, with a creamy texture. When baked, the potatoes become really fluffy, and the thick skin on the outside crisps up really well in the oven. 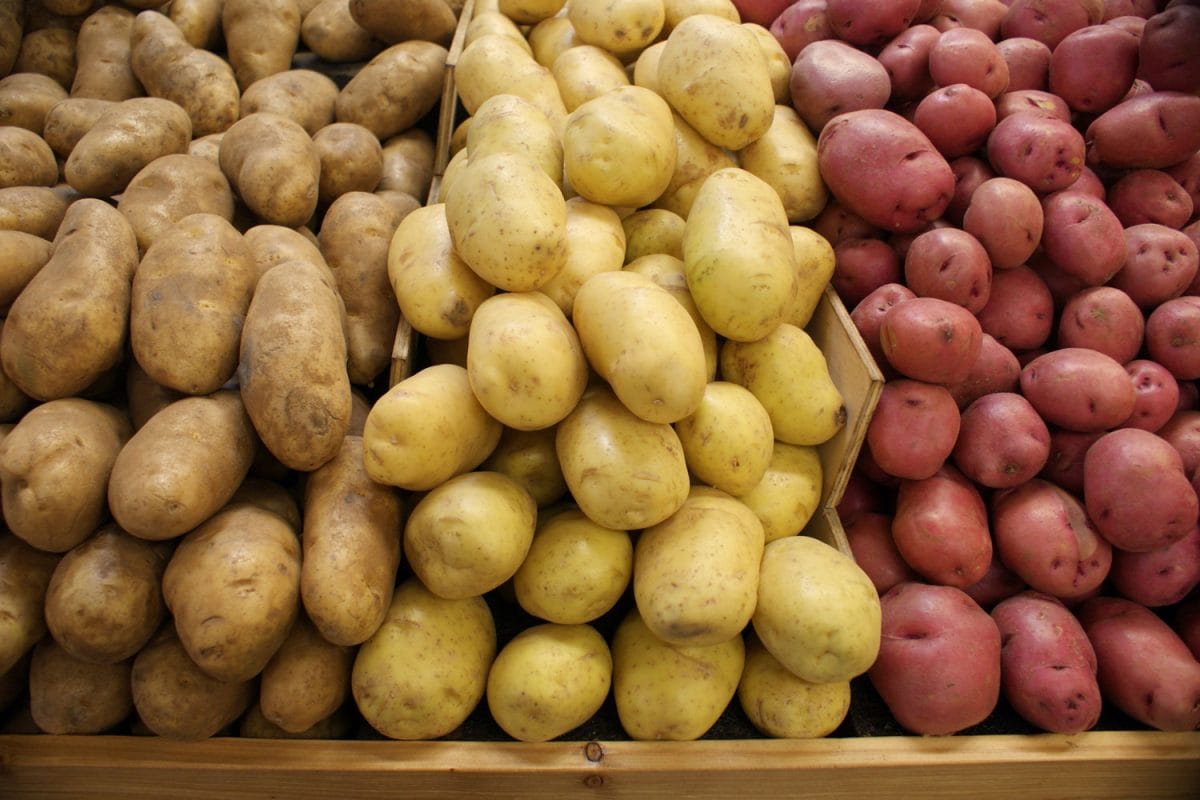 Other starchy potatoes that you can use for baked potatoes are King Edwards and sweet potatoes. These potatoes become soft and fluffy when baked, plus they can absorb a lot of flavor from the fillings and toppings you will add.

What Temperature And How Long Should I Bake A Potato?

Baked potatoes are best cooked in a preheated oven set at 425 to 450°F. The fairly high heat ensures that the potatoes get cooked on the inside, and it will make the oiled potato skins very crispy.

Typically, these potatoes should be cooked for about 45 minutes to an hour, depending on how big the potatoes are. Make sure to flip the potatoes every 20 minutes to ensure that all sides of the potato get cooked and the skin gets crispy.

Tips and Tricks To Making The Best Baked Potato 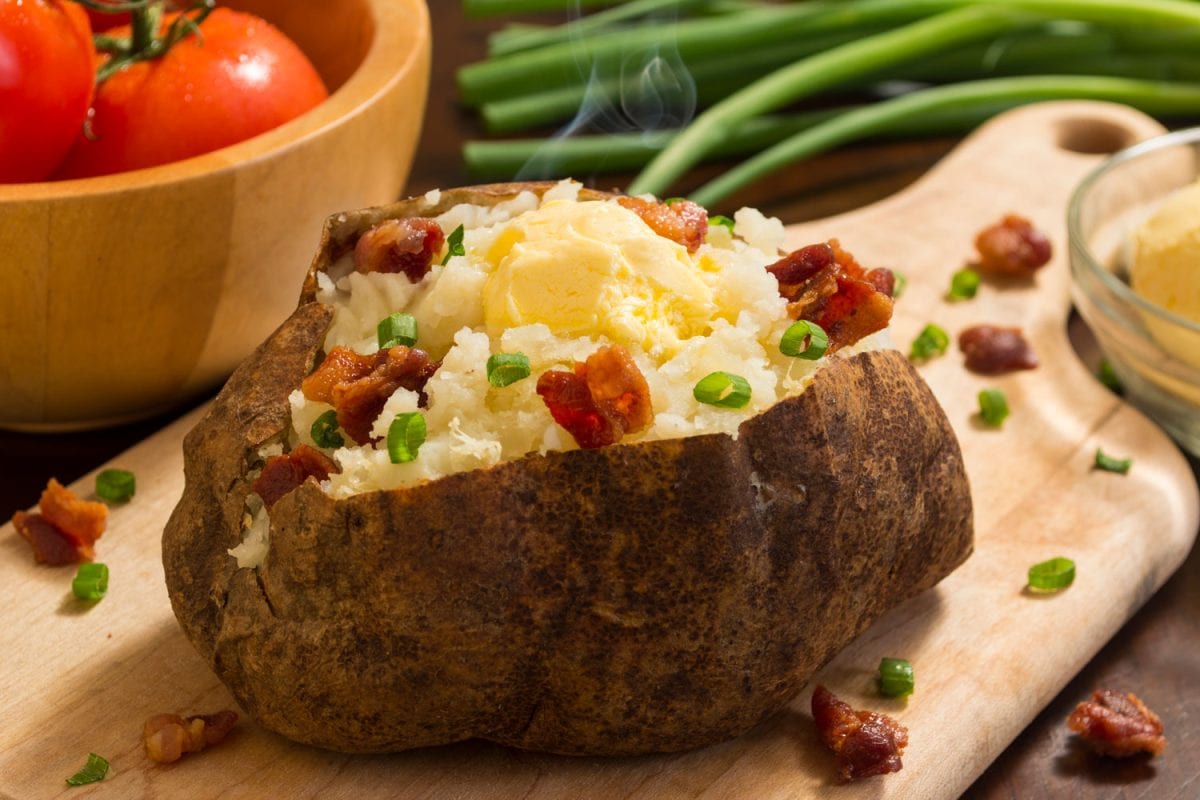 A baked potato is quite possibly the easiest and simplest potato recipe you could ever do, which makes it a perfect recipe for beginner cooks. However, while baked potatoes are simple, there are ways to make sure that your baked spuds are top-notch with these tips and tricks.

Get the Right Size

Before baking your potatoes, prick them about six to eight times, 1/4-inch deep. These holes will help ventilate your potatoes while baking, and it will prevent them from exploding all over your oven.

You should also bake the potatoes on an oven-safe baking rack over a sheet pan. This will allow hot air to circulate around your potatoes and it will not make the bottoms soggy while the tops are crispy.

Get this oven-safe rack on Amazon.

Check out these baking sheets on Amazon.

Baking the potatoes in high heat (425 to 450°F) will prevent your potatoes from having leathery skin. If you bake the potatoes at a low temperature, the skins tend to shrink and become leathery, and they do not look very appetizing.

Test your potatoes for doneness by poking them with a skewer or fork in the center of the potato. If it slides easily without resistance, your baked potato is done. You will typically get this doneness after 45 to 60 minutes of baking.

After cooking, you should slice the potatoes immediately to release the trapped steam inside.

Can I Bake A Potato In The Microwave?

Generally speaking, baked potatoes are cooked in the oven to get the soft inside, fluffy outside texture everyone knows. However, you can also bake a potato in the microwave, but it will not have the crispy skin a baked potato is known for.

If you are running out of time, or you simply need to have dinner on the table in no time, then baking a potato in the microwave is an alternative you can look into. It can be done by doing the same method as a regular baked potato but in a microwave for about 5 to 10 minutes.

What Toppings Should I Put On A Baked Potato 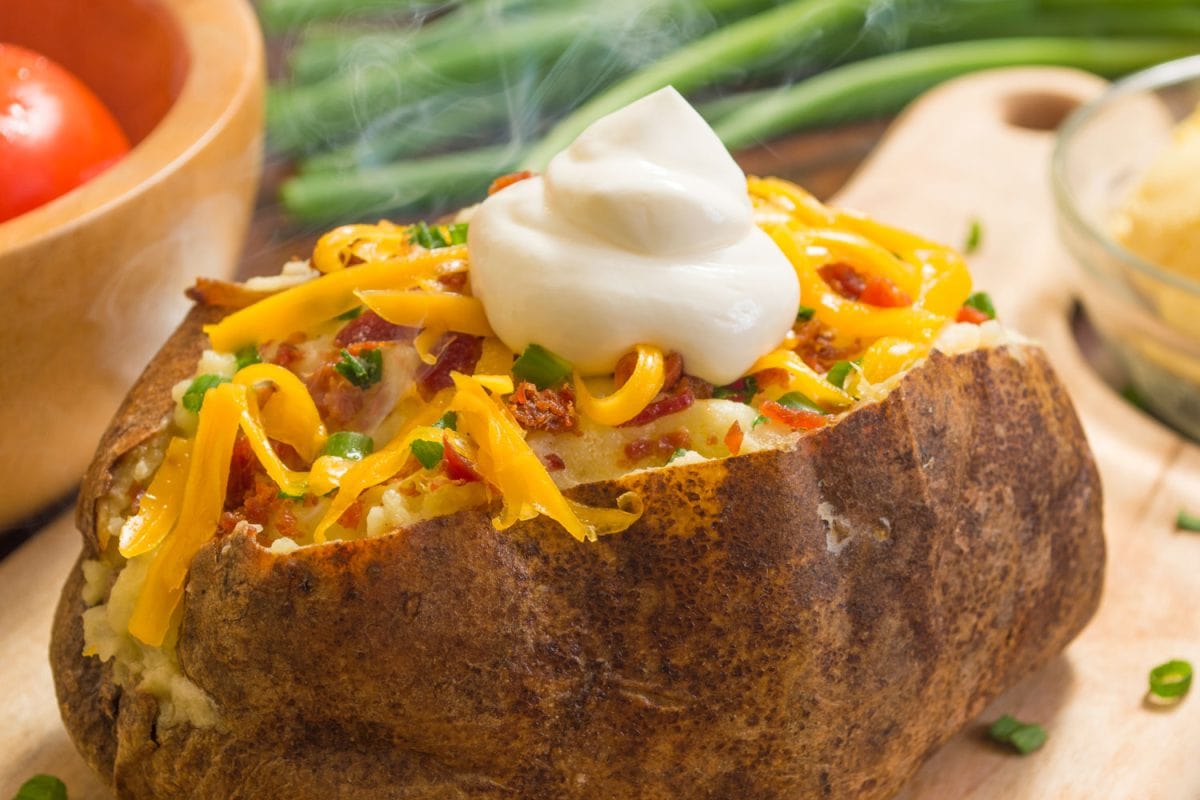 Baked potatoes are great on their own, simply topped with some creamy butter and some herbs to add a fresh flavor. However, you can also play a little with your baked potatoes by adding some toppings and condiments for a unique take on these yummy variations each and every time.

Top your potatoes with black beans, jalapeños, roasted red peppers, cilantro, and green onions. For the sauce, whip up some guacamole and sour cream to complete the ensemble!

Who says pizza should just go on a dough? Top your potatoes with pizza sauce, pepperoni, green bell peppers, and lots of mozzarella cheese! Slide them under the broiler to quickly melt the cheese, and you'll have pizza and potato goodness in one.

A more sophisticated take on a baked potato, top your spuds with sliced steak, arugula leaves in dressing, and some classic blue cheese. Add a little sour cream to round out the flavors of this steakhouse-baked potato.

If you run out of taco shells, worry no more! Make use of that leftover taco stuffing by putting them on top of your baked potato. Grab those seasoned ground meat, tomatoes, beans, corn, and cilantro to create a Mexican take on those baked potatoes!

Shred that extra barbecued meat and top it on your baked potato. You can add more barbecue sauce or add a few extra condiments like sour cream and cheddar cheese for that BBQ baked potato goodness.

This baked potato variation might take a little extra work because you need to scoop them out of their skins, but it will surely be a hit with people of all ages. Mix together some cream, sour cream, green onions, and a lot of cheese before returning them to their shells and baking them. The melty, gooey cheese mixed with the baked potato will surely be a crowd favorite.

Going healthy doesn't have to be boring. Top your baked potato with steamed or roasted broccoli (roasted is best), chives, cheddar cheese, and sour cream for a flavorful take on everyone's least favorite vegetable.

A cult classic, all you need for a loaded baked potato is a whole lot of crispy crumbled bacon bits, onions, sour cream, and a lot of mozzarella cheese. You can't go wrong with it! 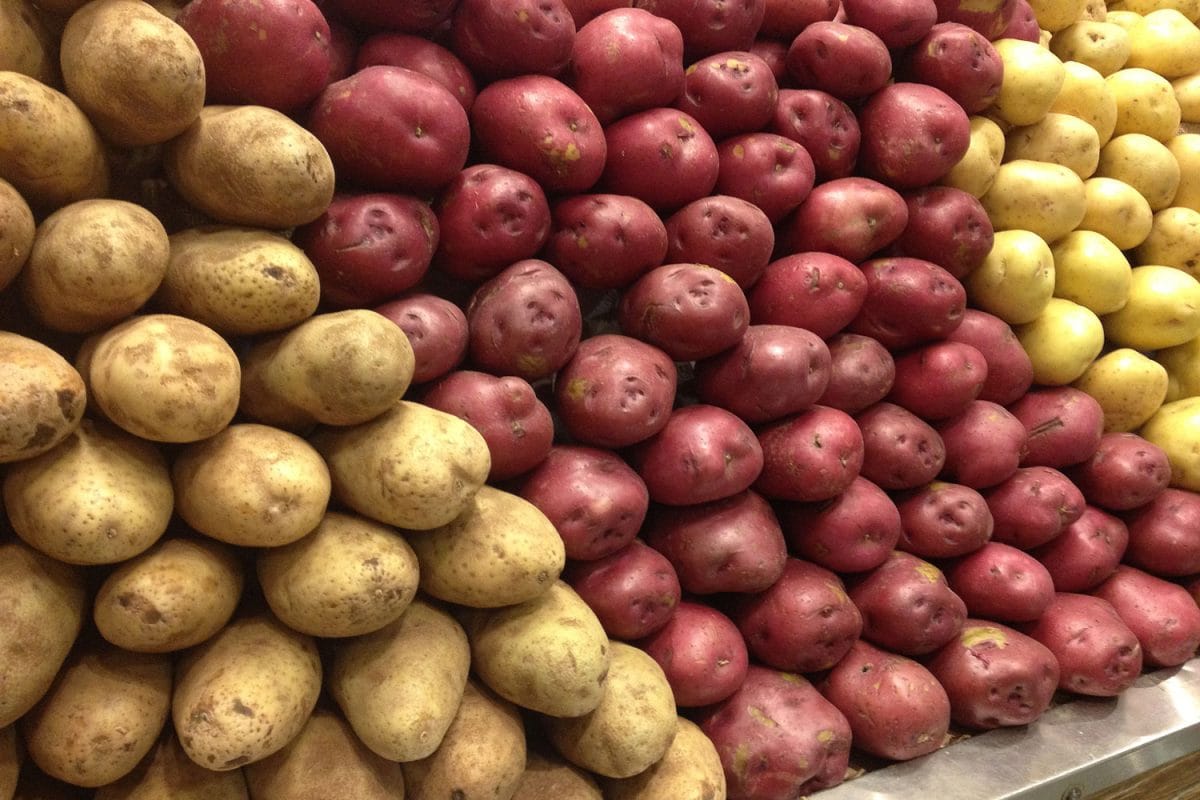 Don't forget to experiment with different toppings and flavorings to make that special baked potato for dinner! With baked potatoes, you can surely have a delicious meal all the time without so much hassle. Make it a staple for your meals and everyone will surely look forward to it all the time.

Looking to know more about cooking potatoes? We've got some articles that might be of interest:

How To Tell When Potatoes Are Done Boiling

What Potatoes Are Best For Hash Browns?

How To Steam Broccoli [With Or Without A Colander]