There's nothing quite as tasty as the savory baked (or jacketed) potato. Pulling a steamy baked potato from the oven and smothering it in butter often resurrects childhood memories --but, how did Mom get that perfected, golden brown skin and creamy inside? If you're wondering whether to coat your potatoes in oil before baking, you've come to the right place. We've researched various baked potato techniques to get the answer for you.

Oiling your potato before baking is a personal preference; it results in a softer rather than crispy potato skin. If you like to season your baked potatoes with salt and/or herbs, oil can be a great method to keep flavorful ingredients stuck-on to infuse flavors during the bake. Alternatively, if you prefer crisp skin, you can baste the potato with oil near the end of baking. Ensure you thoroughly wash and dry the skin before baking and inspect the potato for any eyes (tubers) or bruised areas to be removed.

Now that you know oiling baked potatoes can influence the flavor and texture, how to choose which type of oil? And, if you prefer, what technique is best for achieving a crispy potato skin? You probably didn't realize there are various ways to bake a potato. Stick with us to learn baked potato techniques, from oiling to wrapping in foil to using the microwave. Your delicious baked potato --with several recipe recommendations --awaits! 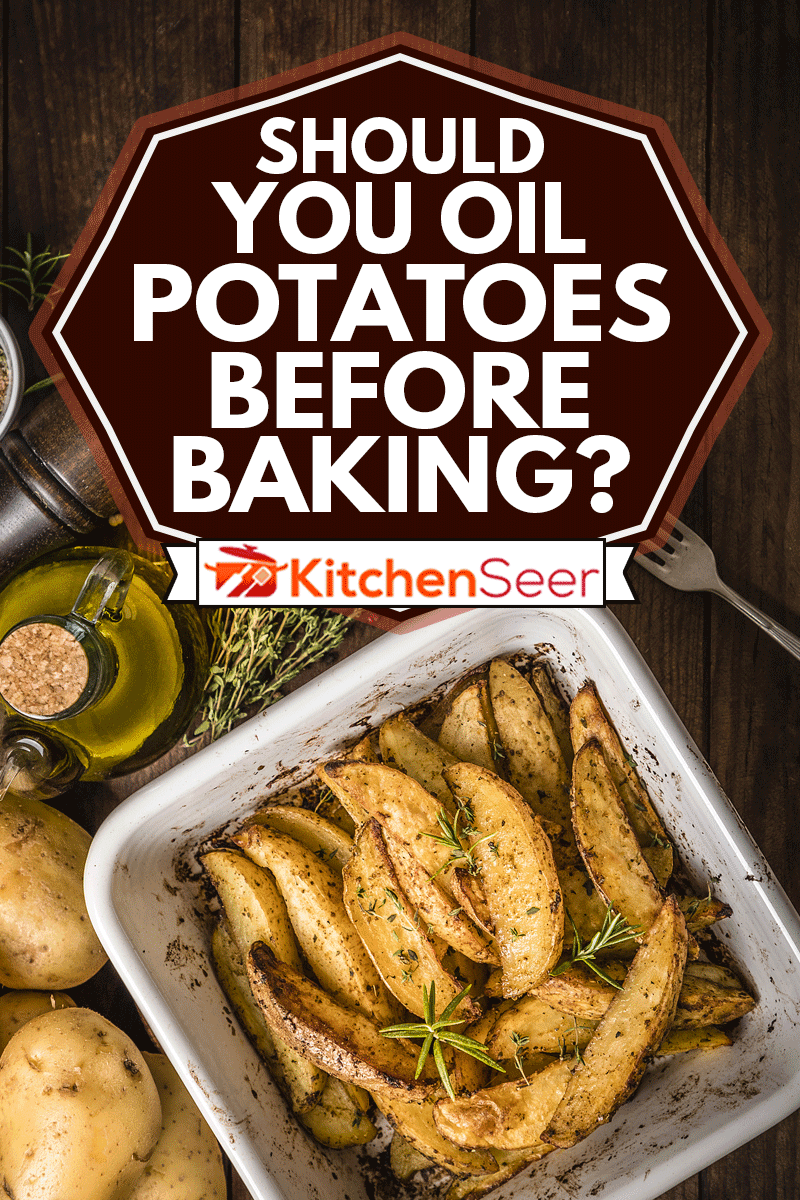 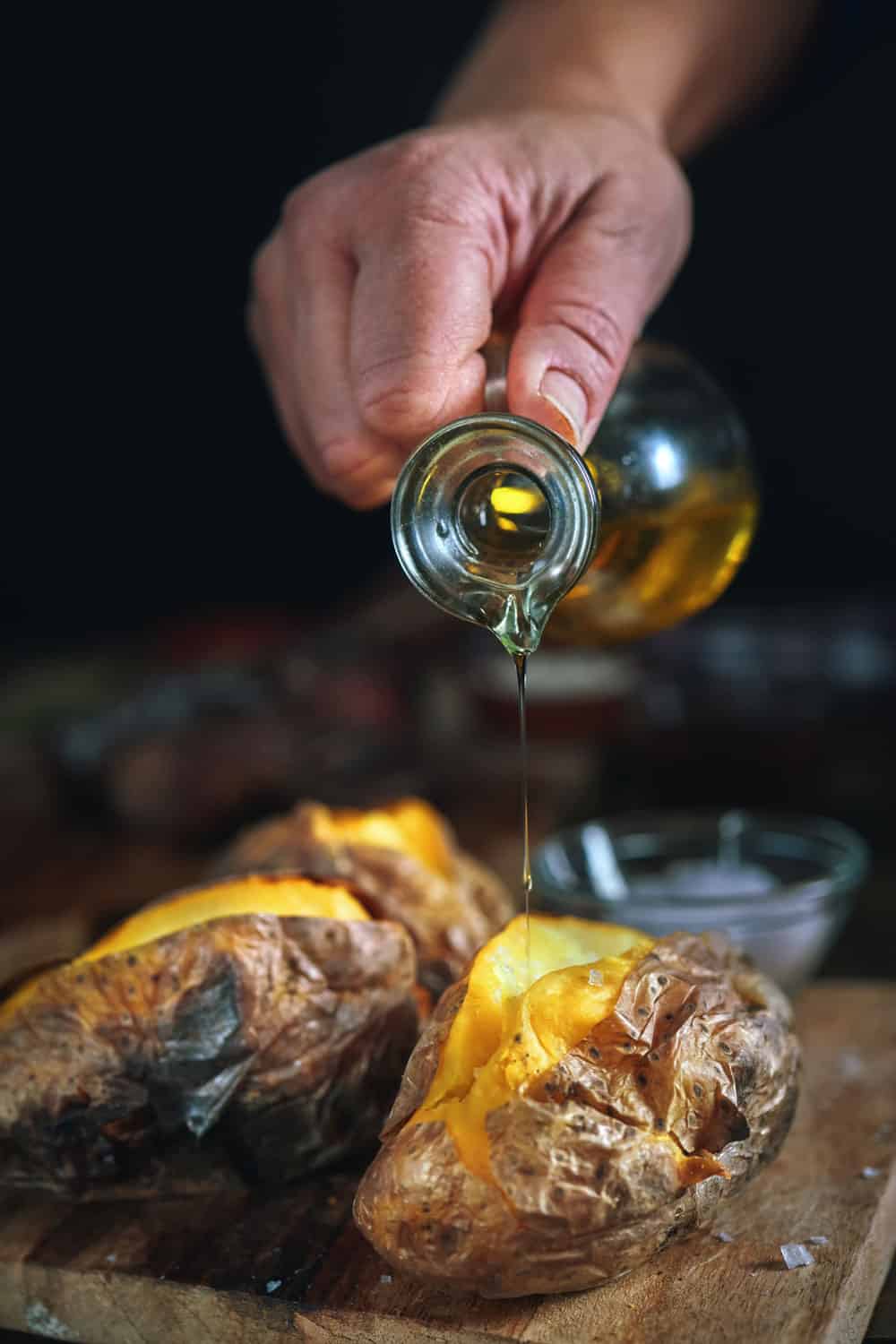 Coating a potato in oil before baking can have delicious results! You'll want to consider the type of oil you use when it comes to flavor because the oil will penetrate the potato skin as it bakes. This can also have a softening effect on the potato skin, so if you prefer a crisp baked potato, reconsider oiling it at all. Instead, bake with bare skin or baste with oil just before removing it from the oven.

As for that golden brown hue, try to use oils with a medium to high smoke point or risk burning that delicate skin. The oils we'll recommend have a smoke point between 400℉ to 500℉, which is slightly lower than the typical oven temperature set for baked potatoes. Therefore, your potato will roast slowly, but the oil will not burn quickly in the process.

For light on flavor, with a medium smoke point (400℉), use vegetable or canola oils on potatoes. These oils are all too common in most households and leave your baked potato lightly browned without overpowering the flavor. Sunflower oil, a slightly nutty flavor with a higher smoke point (440℉), is also a neutral oil for baked potatoes. Using sunflower oil enables you to set a higher oven temperature for a faster bake.

Heartily flavored oils like olive (420℉ smoke point) and grapeseed (450℉ smoke point) allow you to bake at high temperatures and infuse potatoes with distinctive tastes. Combine olive oil or grapeseed oil with a mixture of your favorite herbs or sea salt for a fresh infusion of flavor; try Herb Roasted Potatoes.

Why Do You Poke Potatoes Before Baking Them?

If you do not poke potatoes before baking, will they really explode? Not likely, although possible. The reason for poking potatoes full of holes (typically with the prick of fork prongs) is to enable steam to be released as the potato cooks. This starchy vegetable is full of water, and as it bakes, the heated water vaporizes and attempts to escape. If there is not a convenient escape route through the potato's skin, the pressure of building water vapor can actually break the skin.

Because the heating process happens so slowly in an oven, it is unlikely you'll experience an exploded baked potato. But just to be on the safe side, every variety of potatoes, including sweet potatoes, should be poked before baking. Don't worry if you forget this step in your recipe; poking (or not) will not affect your potato's texture. If you bake your potatoes in the microwave, it is more likely they will burst because the rate of heating occurs more rapidly --so definitely poke before pressing start!

Is It Better to Bake A Potato In The Microwave Or Oven?

Microwaving a potato takes mere minutes, five to seven. Of course, every microwave's cook time varies slightly, and some even feature a pre-set baked potato mode for simplicity's sake. Besides, there is no preparation for a microwaved baked potato aside from a quick scrub of the skin and a few poked holes. But please do not wrap your potato in foil! If you must cover the potato, use saran (or plastic) wrap because the aluminum foil is prone to catch fire as the electrical currents will generate a spark.

Baking a potato in the oven takes a bit of preparation, followed by at least 45-minutes of cooking time. You'll not only want to wash the potato and poke the skin but might also want to rub it with oil and seasonings or wrap it in foil. Then, after the oven has preheated for the high temperatures required (350 - 400℉), expect to wait for nearly an hour while your potato bakes. You might need to occasionally rotate the potato to cook evenly, especially if your oven heats unevenly --not an issue for a rotating microwave plate.

Microwaved potatoes are typically fluffy, soft on the inside. Particularly if covered with saran wrap, you'll achieve a result similar to steaming. Overcooked, however, and you'll have a soggy consistency. Baked in the oven, potatoes have a soft yet creamier texture. Beware of overcooking here, too, because oven-baked potatoes risk becoming dry and crumbly. Undercooking with either microwave or oven method will leave your potato with a flavorless, hard center.

If you prefer softer skin, microwaving the potato is the method of choice. Oven-baked potatoes have a crisp skin yet, as we've discussed, can be softened by applying oil. Wrapping your potato in aluminum foil to oven bake will also result in a softened skin texture.

Should You Bake Potatoes Wrapped In Foil? 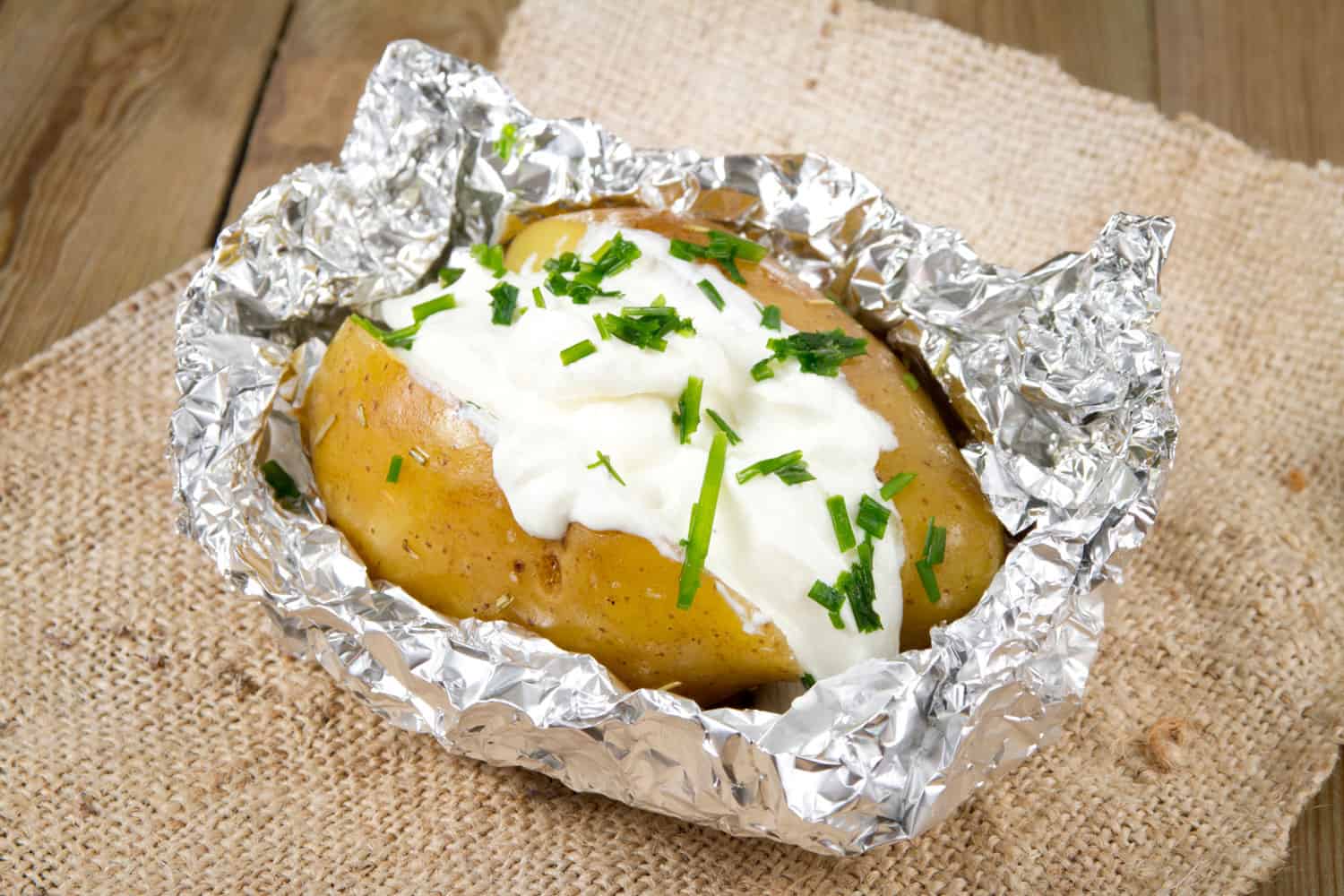 The foil will create a steaming effect, trapping moisture around the potato skin as it bakes. So, if you prefer a softened skin, wrapping the potato in foil is the way to go. It's really a matter of personal preference --whether or not to wrap your potato in foil. The potato's interior will result in a thick, moist texture similar to that of a steamed or boiled potato.

And, contrary to what you might think, wrapping in foil will not necessarily help your potato cook faster. It can actually increase bake duration because it takes time for the oven's heat to penetrate the foil, in addition to the potato. The foil will keep the potato hotter for longer after being removed from the oven. So if there is a lapse between retrieval and serving time, you might consider foil to help keep your food safely warm.

Wrap in foil to roast a potato in the embers of an open fire or on the grill. This will keep the potato clean in the coals so you do not end up with a mouthful of smoldered ash. Plus, if you really want to plan ahead for a backyard Bar-BQ, you can slice open the raw potato to fill it with butter and chives --any toppings of your choice --then wrap in foil to cook. When you pull it from the flames, you'll have a heartily seasoned and stuffed morsel in every bite!

Why Do Baked Potatoes Take So Long To Cook? 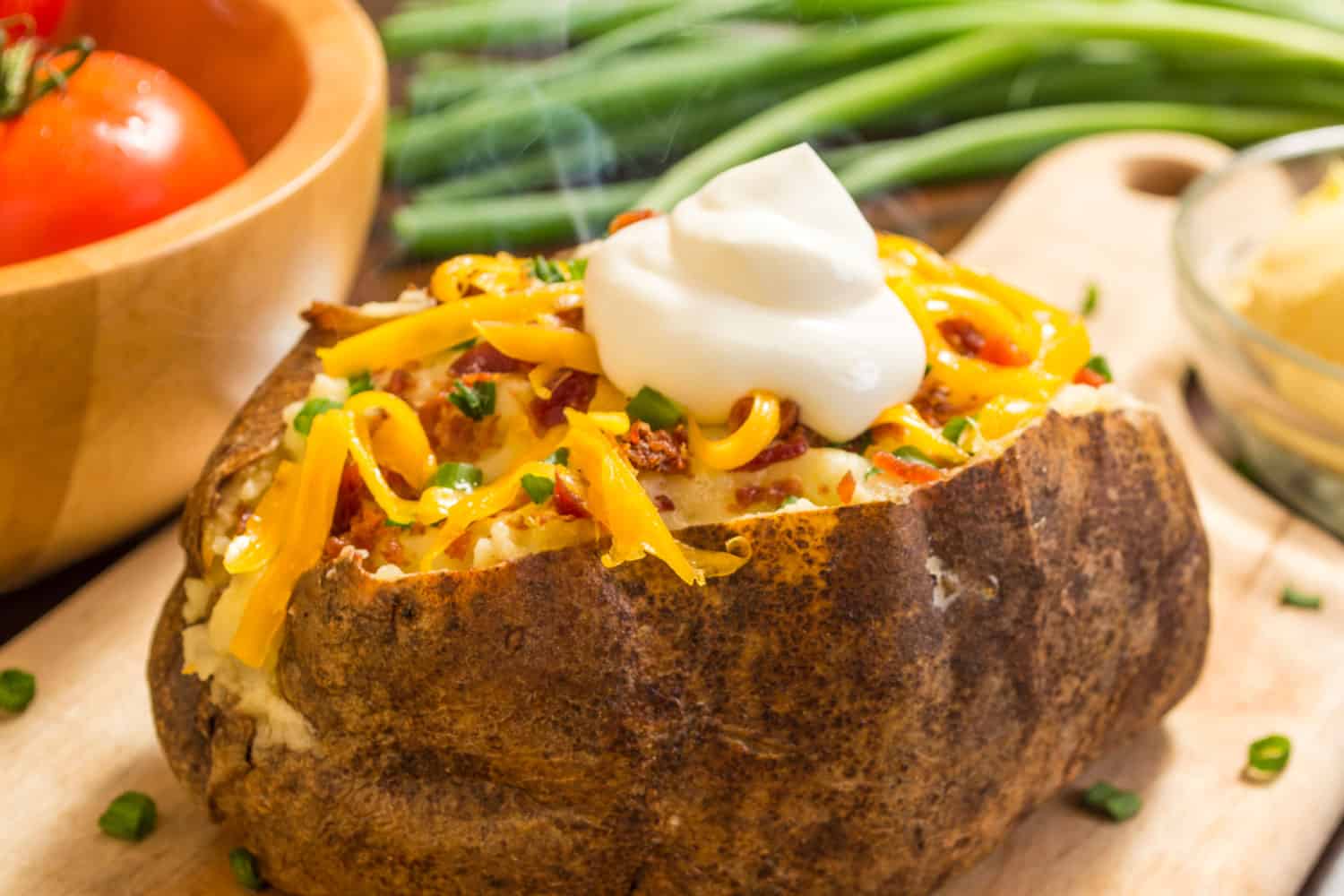 Baking involves cooking from the outside in as the oven's heat circulates whole potatoes. The heat has to penetrate the potato's skin and make its way through the dense center. Heating the water inside of the potato generates steam (or vapor) that aids the baking process by keeping the potato moist and softening the texture. That can take some time, especially if the potato is wrapped in foil. Baked potato recipes typically recommend using high heat, at 400℉, for between 45 and 60 minutes or until the potato is soft enough to puncture effortlessly.

For best results, bake potatoes on an open oven rack. If you do use a baking sheet or roasting pan, rotate the potatoes throughout the bake, so they cook evenly. Try Twice Baked Potatoes. 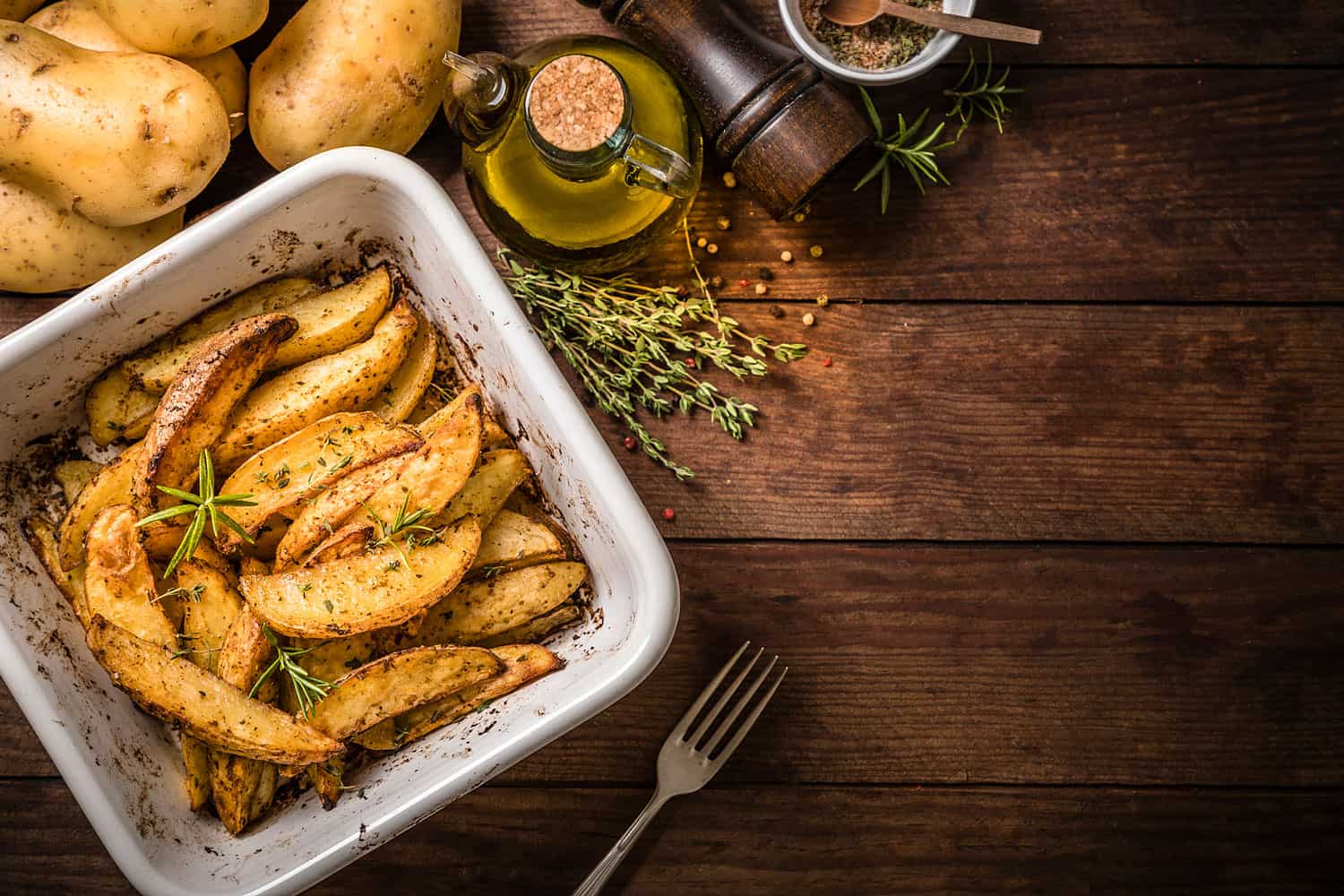 From techniques to flavors, you choose how you want to savor this delicious dish! Choosing the right oils or baking bare or foil-wrapped skins will give you the texture you prefer. If you're looking for the best bakeware for your roasting recipes, check out our related posts:

What is Considered a Shallow Roasting Pan?

How Long Does A Hot Pocket Last In The Freezer?

At What Temperature To Bake Cinnamon Rolls?