Using new tools in the kitchen can be like a double-edged sword. It's exciting because you have more help around! However, it's also terrifying because you aren't familiar with how it should work. With pressure cookers, they can make a hissing noise that might raise alarms - is it supposed to do that? Let's find out!

Hissing noises coming from the pressure cooker is standard in some circumstances. As the name implies, it works by using pressure. Once it builds too high, it has a safety valve that removes the excess. The removal is what makes the hissing sound. However, there are some cases where it shouldn't hiss at all.

Sounds aren't supposed to be scary all the time. Regarding pressure cookers, it's standard to hear some hissing. Why is that? Getting a better idea of why this happens would require going over how a pressure cooker functions. If you'd like to learn this and more, keep reading ahead. 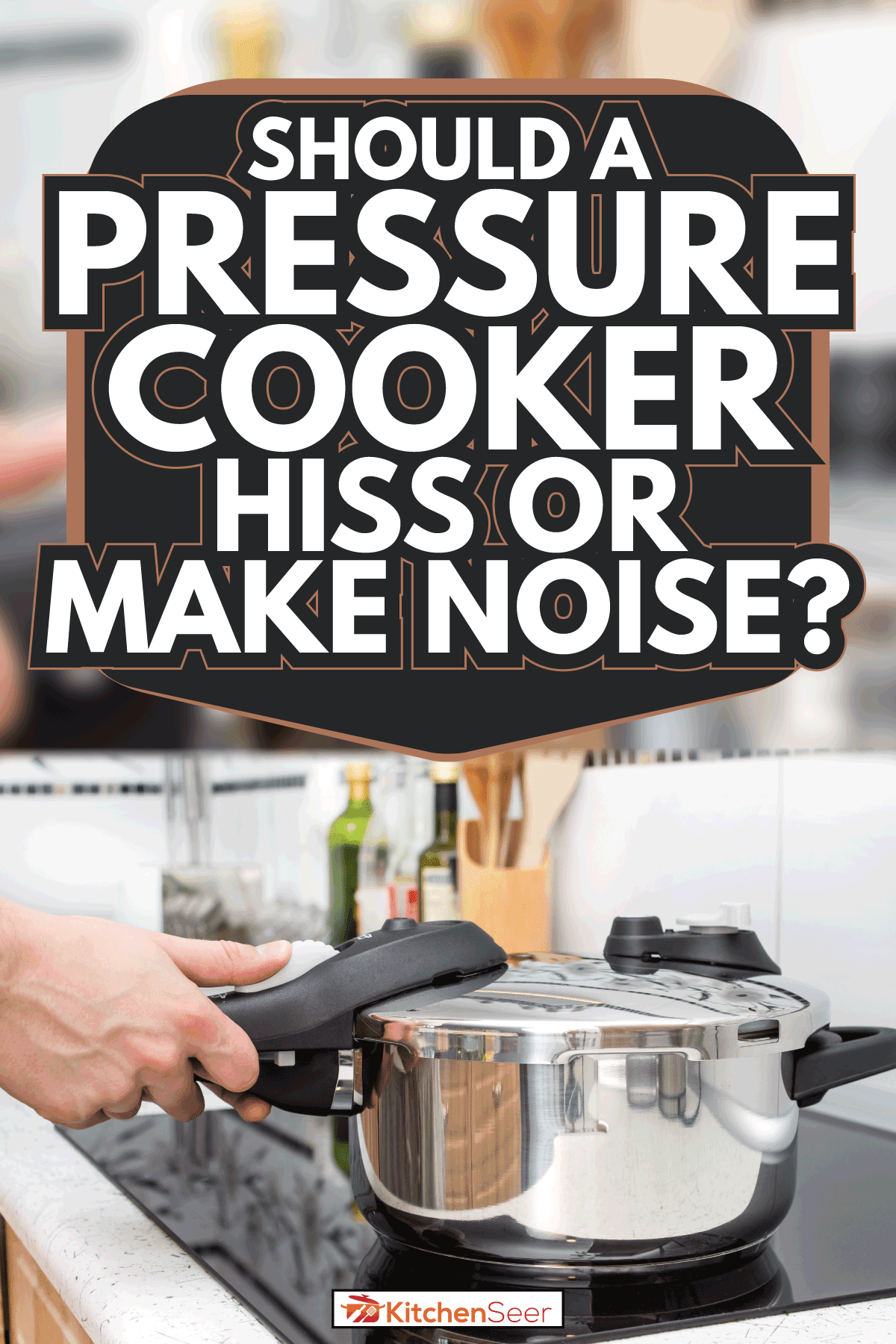 A pressure cooker works by trapping the steam it generates within a sealed chamber. It does this while the food contents inside are cooking. As the amount of steam increases, so does the pressure. This process increases the boiling point of water past 212 degrees Fahrenheit.

Why does that matter? As some suggest, this allows you to cook faster without burning your food. It also keeps all the evaporating flavors and aroma inside. 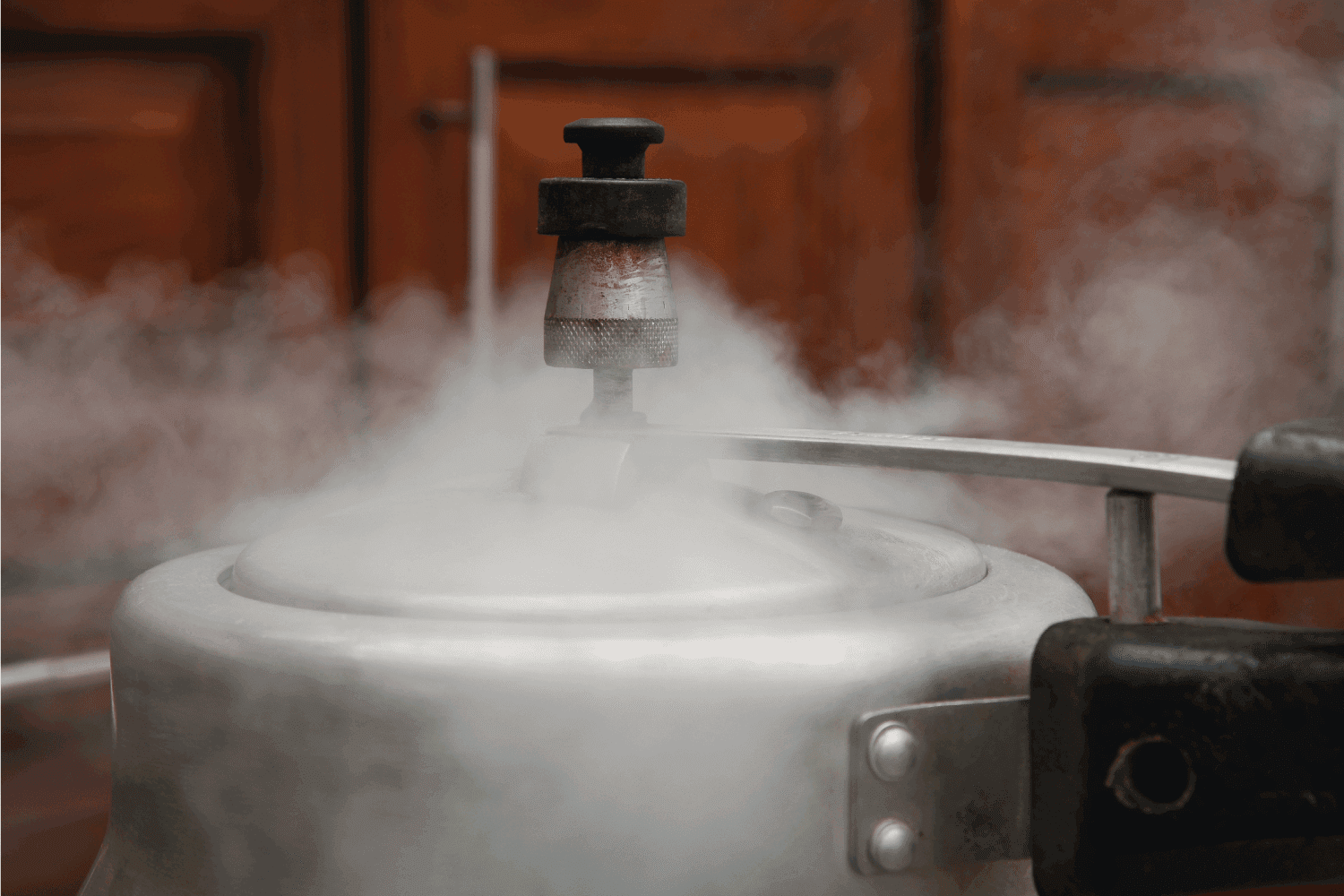 Why Does a Pressure Cooker Make Noise?

So, we know the basics of what a pressure cooker does. But, where does the noise come from? It comes from steam and pressure.

As mentioned, as steam inside the sealed chamber increases, so does pressure. What happens if it builds up too much? That's where the tool has some precautions. There's usually a valve that will allow the excess to escape.

In the past, this was a problem because releasing the excess was a bit tricky. Manufacturers would use cheap parts. And, there were little to no safety features that many pressure cookers today have.

Thus, if there was a mishap when it needed to release steam, it wouldn't have anywhere to go. So, the result would be an explosion. As technology advanced, manufacturers implemented safety features that allow pressure cookers to work as safely as possible.

The sound you hear is most likely the pressure relief valve releasing the excess steam. It comes with a whistling or hissing sound to let you know it's doing what it's supposed to do. Accordingly, hearing this sound means you should turn down the heat.

Otherwise, the machine will still produce an excess amount of pressure. As a result, you might end up with the contents inside all over your kitchen. In other words, it can potentially explode [the food, that is, not the machine itself].

Though, it's not likely the case as there might be another valve that will prevent this from happening.

However, this is what should happen ideally. As we already know, there are still some scenarios where this description wouldn't fit. So, if we want to cover all our bases, let's go over when the pressure cooker would produce a hissing noise.

If you'd like to see a live demonstration of how the cooker works, here's a YouTube video to help:

The first scenario that shouldn't raise any alarm bells is when you first start using the machinery. When you start using the cooker, it will need time to build the correct pressure. So, it will likely produce some hissing sounds occasionally as it builds up.

The stovetop variations will continue to hiss. Though, it won't be as loud as when it's building pressure. If you want a quieter cooker, you'll have to look towards purchasing an electric one.

For demonstration, here's how an electric pressure cooker should work:

It should only last a few seconds before it resumes working relatively quietly. The problem occurs when it isn't lasting a few seconds, and it's coming from somewhere other than the pressure relief valve.

Where else could the steam come out? That would be near the seal of the lid. If you see steam coming out from the top instead of the valve, it indicates there's a problem with the seal. More specifically, you probably need to adjust how it's seated.

Here's a YouTube video showing you how to do that:

Should My Pressure Cooker Be Releasing Steam While Cooking?

If it's your first time using a pressure cooker - whether an instant pot (electrical) or a stovetop variation - you'll most likely see it releasing steam. It can be concerning because it's not something you might be familiar with when cooking food.

In general, it's standard for any type of pressure cooker to release steam. It's a way for it to remove excess pressure. For stovetop variations, it's an indicator to turn down the heat. Electrical ones won't need you to mess around with it much. 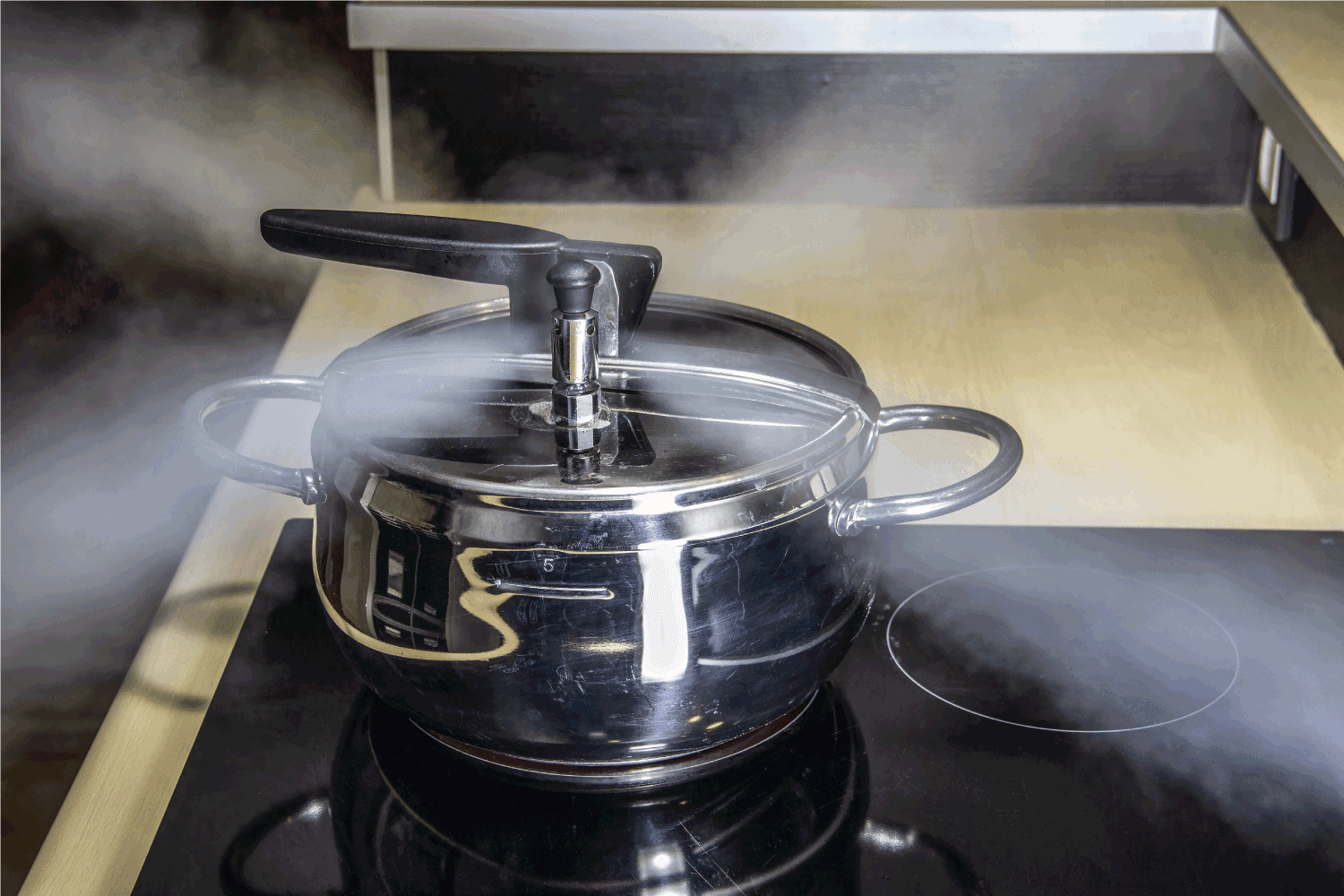 Electric pressure cookers (instant pots) will release some steam in the beginning stages of cooking. Once it reaches the correct pressure, it will close. Accordingly, you should no longer see it coming out.

However, it seems that newer instant pot models have a design that lets them release steam periodically. It will continue doing so for 2 minutes to maintain the correct pressure. Older models wouldn't work this way.

The only problem that you might run into is the area where the steam will come out. If it comes out around the lid, there's a problem with the seal.

How Do I Know if a Pressure Cooker Is Sealed?

Problems with the seal will come with two easily noticeable symptoms. The first would be steam coming out of the lid. However, with this symptom comes another.

If steam is coming off the lid, your cooking time is most likely going to be longer. What timeframe would indicate it's a problem? In general, it should take 45 minutes at most for the cooker to set itself up.

Any longer than 45 minutes indicates the pressure cooker didn't seal correctly. Alternatively, it wasn't able to close. The other scenario that you might run into relates to the float valve. 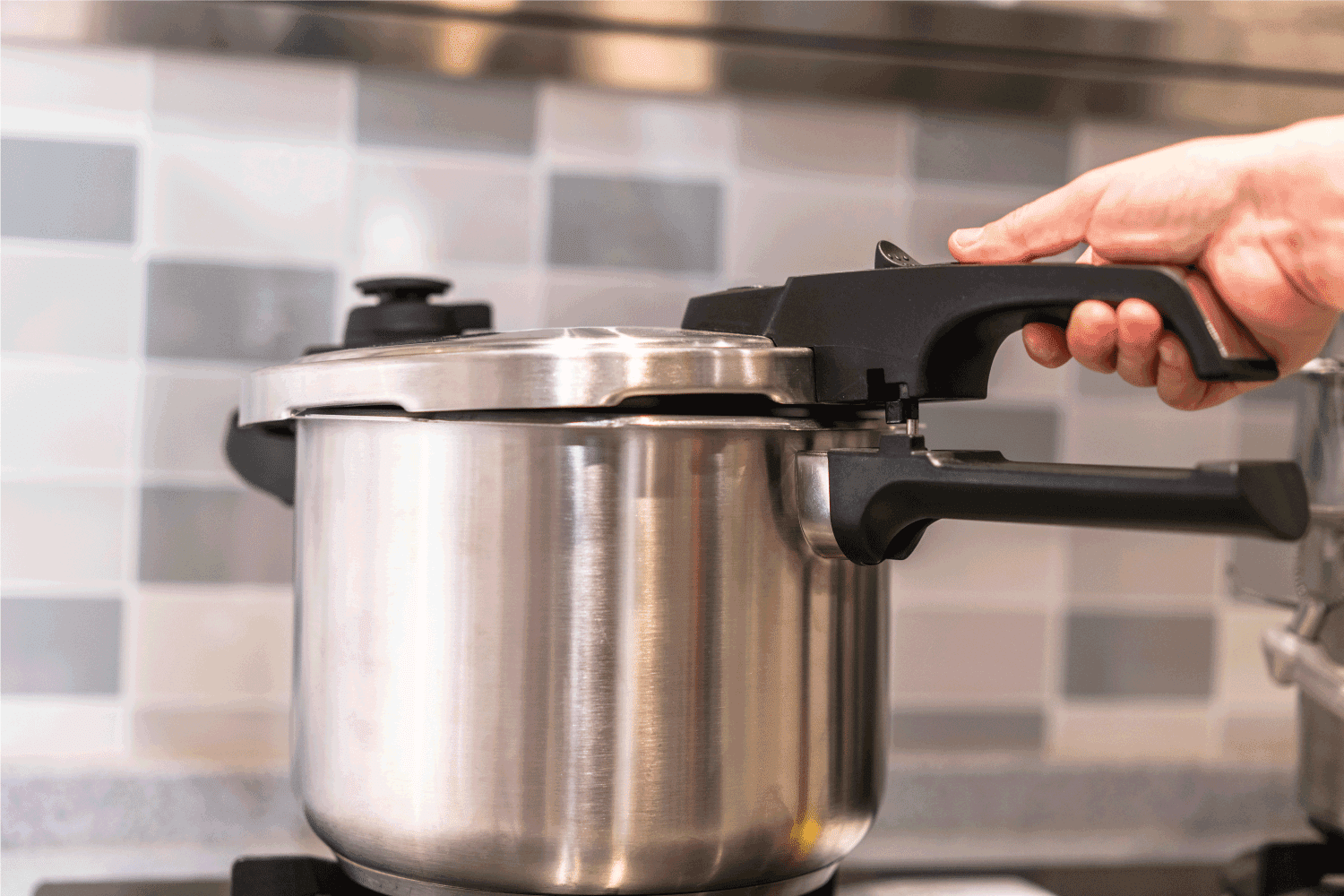 If the instant pot cook time begins - but the float valve did not pop up - the instant pot did not seal. This problem occurs when there are issues with other components in the machine. In other cases, something is lacking. To cover all the potential issues, we'll list them:

When any of the problems above don't apply to you, there are some simple cases of why your pressure cooker won't seal. The first issue would relate to the temperature of the food you're planning to cook. If it's cold, it will take longer to come to pressure.

The next would relate to the quantity of the food. If there's a lot you plan to prepare, it would also require more time to come to pressure. Therefore, you'll have to wait longer until the pressure cooker seals.

Lastly, make sure the power cord is not loosely connected. If it is, plug it in entirely to ensure it's receiving enough power. 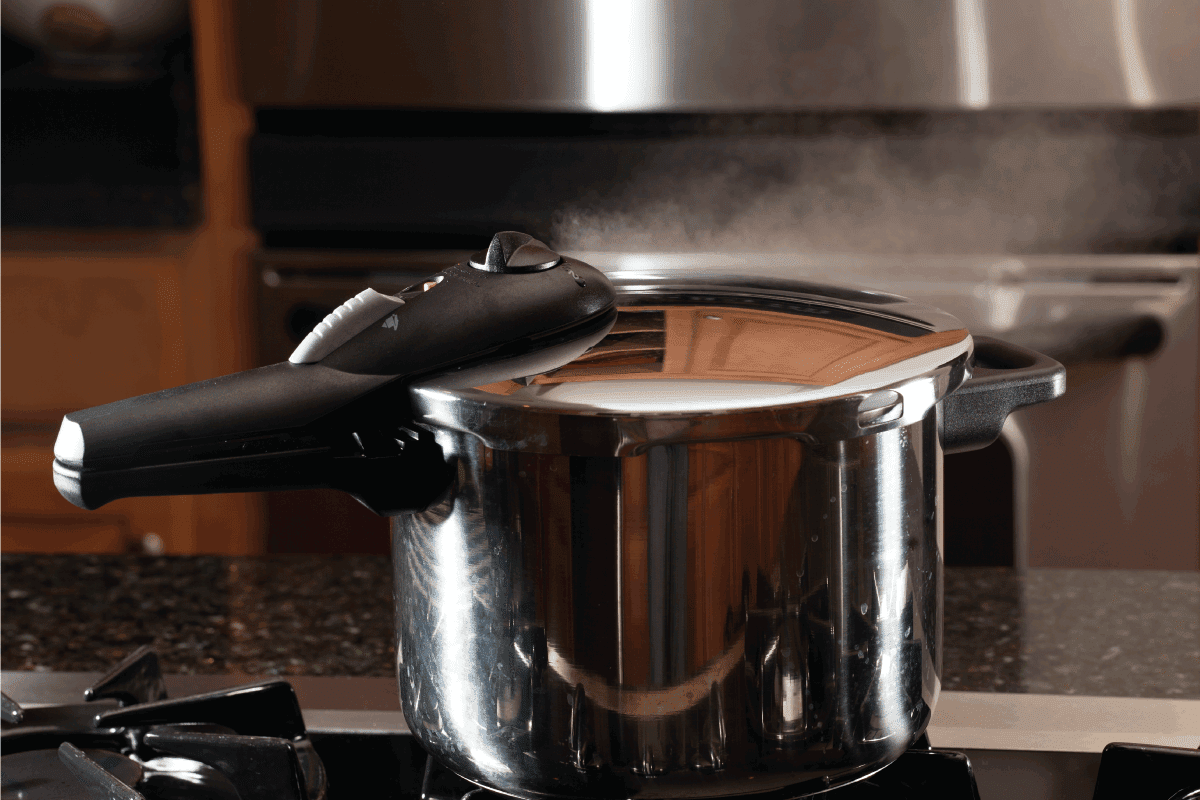 How Do You Seal a Pressure Cooker?

If your electric pressure cooker is having trouble sealing, the first fix would be to put the steam release valve - or switch - to the sealing position. However, if it's already going through the process of pressurizing, it's best to stop the machine first before you do this.

When there's a liquid problem, you'll need to consult your user's manual to check the minimum requirement necessary for the cooker to pressurize. For leftover food that sticks to the bottom, you'll need to remove it before using the pressure cooker again.

You can do this by deglazing the pot using a small amount of hot water and scraping the bits off. Lastly, mistakes get the best of us. If you've recently cleaned the cooker, you might have forgotten to insert the float valve back into place.

Getting it to seal again would require you to push the float valve in. There will also be a silicone cover that will hold the valve from the inside.

Is the Pressure Release Valve Supposed To Be Loose?

Most machines will have components that are securely in place. When you're working with pressure cookers, you might notice that the pressure release valve seems to be loose. Is it supposed to be like that? Many would suggest that it's an intentional feature.

It will become more secure once it builds enough pressure. Cooking appliance manufacturer Ninja also supports this as the case.

Noises can be scary - especially when you don't know if something is supposed to be making those noises. As we've found out, pressure cookers do hiss. It's normal under certain circumstances. In other situations, it can indicate you need to inspect it.

Before you go, you might want to check out these other articles:

Garbage Disposal Making Noise But Not Working - What To Do?

Danby Refrigerator Not Getting Cold - What Could Be Wrong?

How To Reset A Cuisinart Bread Maker

Why Does My Rice Cooker Bubble? [And How To Prevent This]