The Futura pressure cooker, with its hard-anodized finish and elegant design, looks sleek and modern. But does it still whistle like an old-fashioned pressure cooker? We've scoured resources researching this topic, and here's what you need to know:

The Futura does not whistle in the conventional sense. Most first-generation pressure cookers release a large burst of steam with a hiss or whistle when they reach pressure.

The Futura, on the other hand, uses a pressure valve that releases a smaller amount of steam continuously when at pressure. For this reason, you cannot count the number of whistles to time cooking in the Futura but should use a timer instead. 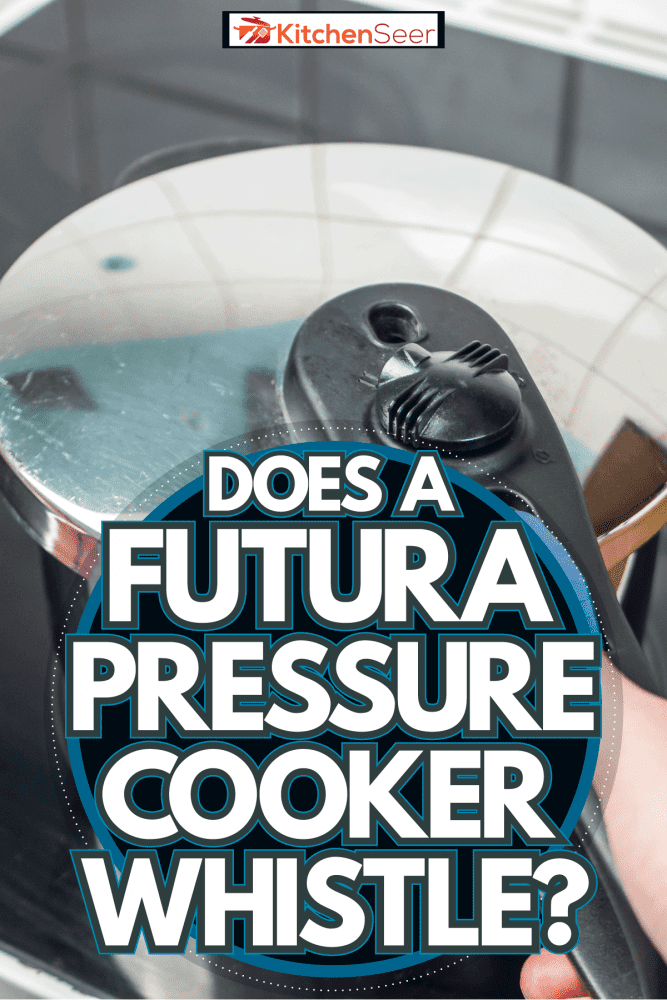 Is a pressure cooker supposed to whistle?

In first-generation pressure cookers, a weighted valve sits on top of the steam vent. This valve may jiggle and sputter occasionally as pressure builds up inside.

Once it reaches full pressure, the valve releases a large burst of steam with a whistle. This whistle sounds more like a strong hiss than the high-pitched whistle of a kettle. 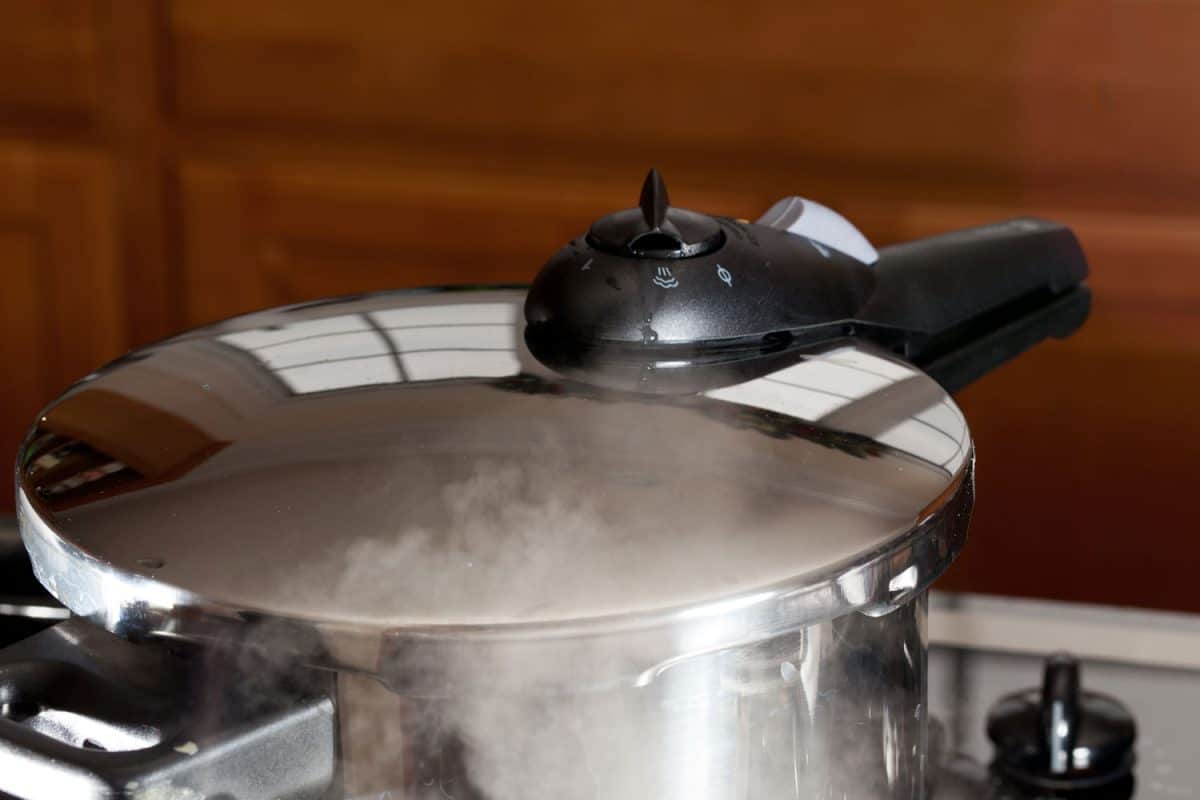 It is typical for home cooks from these parts of the world to time recipes by the number of whistles the pressure cooker releases. You may even find some recipes that use this method. However, most manufacturers and recipes recommend using a timer.

While other styles don't whistle like first-generation pressure cookers, they will often make some noises too. For more information on this topic, check out this article: Should A Pressure Cooker Hiss Or Make Noise?

Not all first-generation pressure cookers whistle, though, and this is the case when it comes to the Futura.

The Futura uses a weighted valve, just like other first-generation pressure cookers. However, its valve looks and works a bit differently. While most weight valves just fit over the steam vent, the Futura valve is a lever that extends from the steam vent down the handle.

This lever system allows a smaller amount of steam to escape once pressure is reached. This design means that the pressure never builds to the level to release a large burst of steam and the accompanying whistle. Instead, a steady amount of steam escapes from the vent and valve when at pressure.

This system has some advantages. The whistle from other first-generation pressure cookers is much louder. The Futura design lets you cook in relative quiet.

Also, a sudden burst of steam can be quite startling for cooks new to using pressure cookers. The smaller stream of steam from the Futura helps many feel more comfortable and confident.

Another advantage of the lever-style valve is that you can release pressure by simply pressing on the handle-side of the lever. This will pull the valve off the vent, allowing steam to escape and reducing pressure inside the cooker.

This design does have its downsides, though. You cannot time your recipe by counting whistles with the Futura. For cooks who rely on this method, this can be a major disappointment.

If you're happy to use a timer and want a quieter, calmer kitchen, the Futura can be a good choice for you. It's especially good for those who are new to stovetop pressure cooking.

Click here to see the Futura pressure cooker on Amazon.

What do you do when your pressure cooker doesn't whistle? 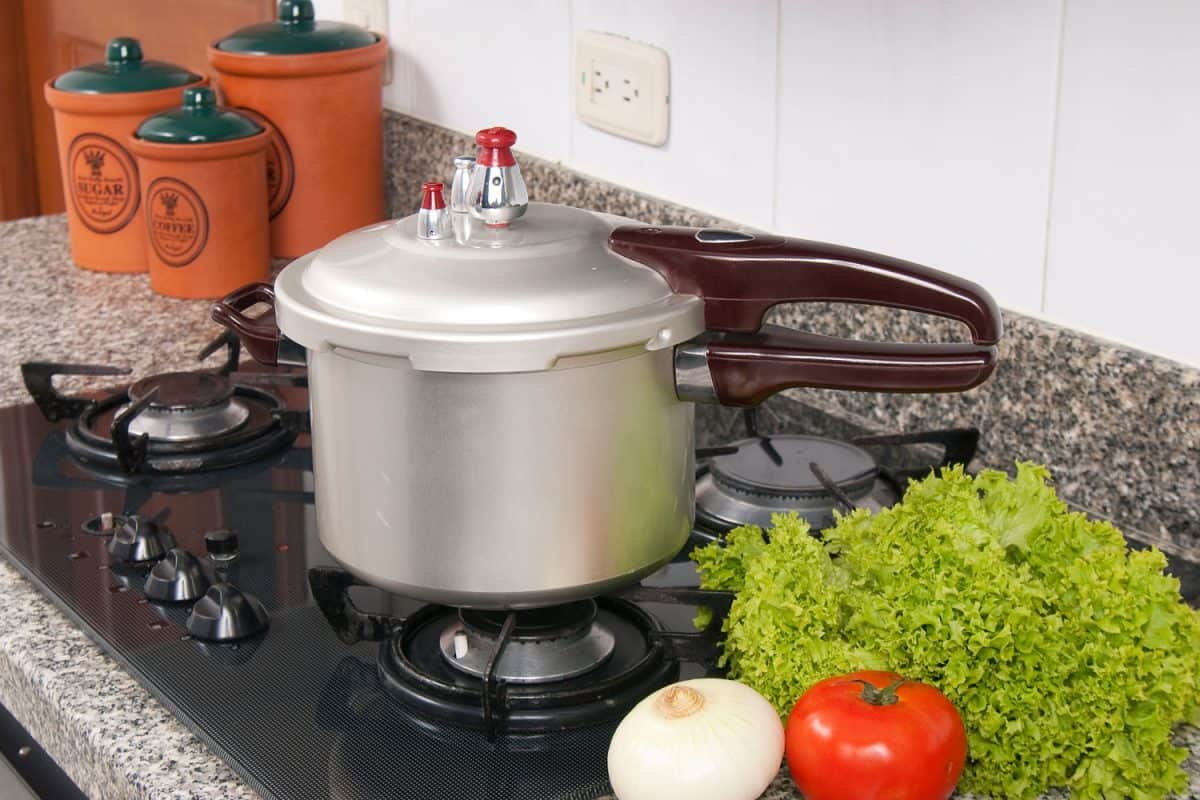 If you have a traditional first-generation pressure cooker and it isn't whistling, there may be a few causes. Most of these relate to steam escaping before pressure can build up. Let's look at how to diagnose and resolve your whistling woes.

Remember to only do maintenance on your pressure cooker when it is completely cooled.

Many pressure cookers use gaskets to create a seal between the pot and lid. These gaskets are typically made of rubber or silicone. Issues with this gasket can cause an incomplete seal, preventing you from building up pressure inside the pressure cooker.

If you're having pressure problems, the gasket is a likely culprit. Check it to make sure that it is clean, undamaged, and positioned correctly. Bits of food or other material stuck to the gasket may cause it not to seal, so give it a good cleaning if it appears dirty at all.

Make sure that the gasket is correctly positioned too. If it looks lopsided or loose, check your owner's manual for the correct position.

If the gasket is cracked or otherwise damaged, you will most likely need to replace it. Most manufacturers sell replacement gaskets for their pressure cookers. It's wise to keep a spare on hand for future troubles.

Keep in mind that not all pressure cookers use gaskets. Just because yours doesn't have one doesn't mean it's missing. Check your owner's manual to see if yours includes one or not.

If your gasket is in good shape but you still aren't getting enough pressure, the valve is another potential culprit. The valve sits on top of the steam vent, locking in steam until pressure is reached. If the valve isn't correctly positioned on the steam vent, this can lead to pressure problems.

The correct positioning of the valve can vary by model, so check your owner's manual to make sure yours looks right. Also, check that the valve is clean. Any food or other detritus stuck in the valve should be cleaned out, as it may prevent a proper seal.

If the lid isn't positioned correctly on your pressure cooker, you won't get a complete seal. The lid might be at an angle or might not be rotated to the locking position.

In fact, many pressure cookers lids aren't completely round. This is how they lock in place. For example, Hawkins pressure cookers have oval lids. You can see how they open and close correctly in the video below:

Check your food and liquid levels

Most of the time there will be a line in your pressure cooker showing how much you can put in it. Make sure your food and cooking liquid fall beneath that line before putting on your lid and cooking.

If there is no such line, you can also check your owner's manual to find its maximum volume.

Too little liquid can also be a problem, though this is less common. For most pressure cookers, you will need at least one cup of liquid unless you are following a recipe that states otherwise.

Give it time or heat

Sometimes your pressure cooker might just need more time or flame to build up the pressure. It's most common to use high heat to build up pressure, then reduce the heat once pressure has reached.

Even on high heat, it can sometimes take longer than you might expect to reach the correct pressure. Check out this article to get the whole story on this topic: How Long Should Pressure Cooker Take To Pressurize?

How do I know if my pressure cooker is at pressure? 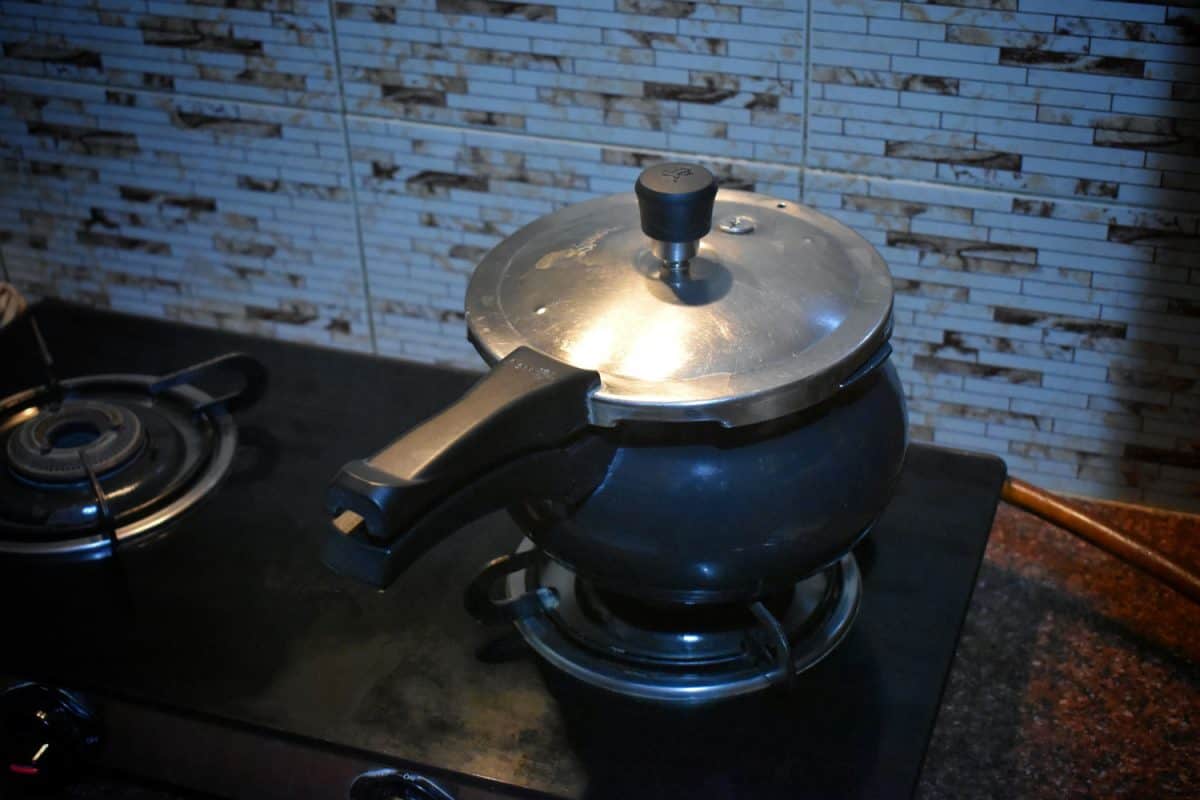 Pressure cookers come in a variety of forms and styles. There is no single, universal indicator that pressure has been reached. However, we will cover some of the most common ones.

As we've seen, most first-generation pressure cookers whistle when pressure is reached. The sound and burst of steam let you know the cooking time can begin.

The Futura will have a constant, steady stream of steam escaping from the pressure regulator once at full pressure.

Most second-generation pressure cookers use a short pop-up valve as a pressure indicator. These are typically on the handle near a dial that selects the target pressure.

Electric pressure cookers usually use digital displays to indicate the pressure level. In some cases, this might be an indicator light.

In other cases, the cooking timer will start once at pressure. Because the cooking cycles on these machines are usually automatic, there is less need to monitor pressure with these models.

As always, it's best practice to consult your owner's manual. While the previous indicators are the most common, some models may use idiosyncratic systems unique to their brand. 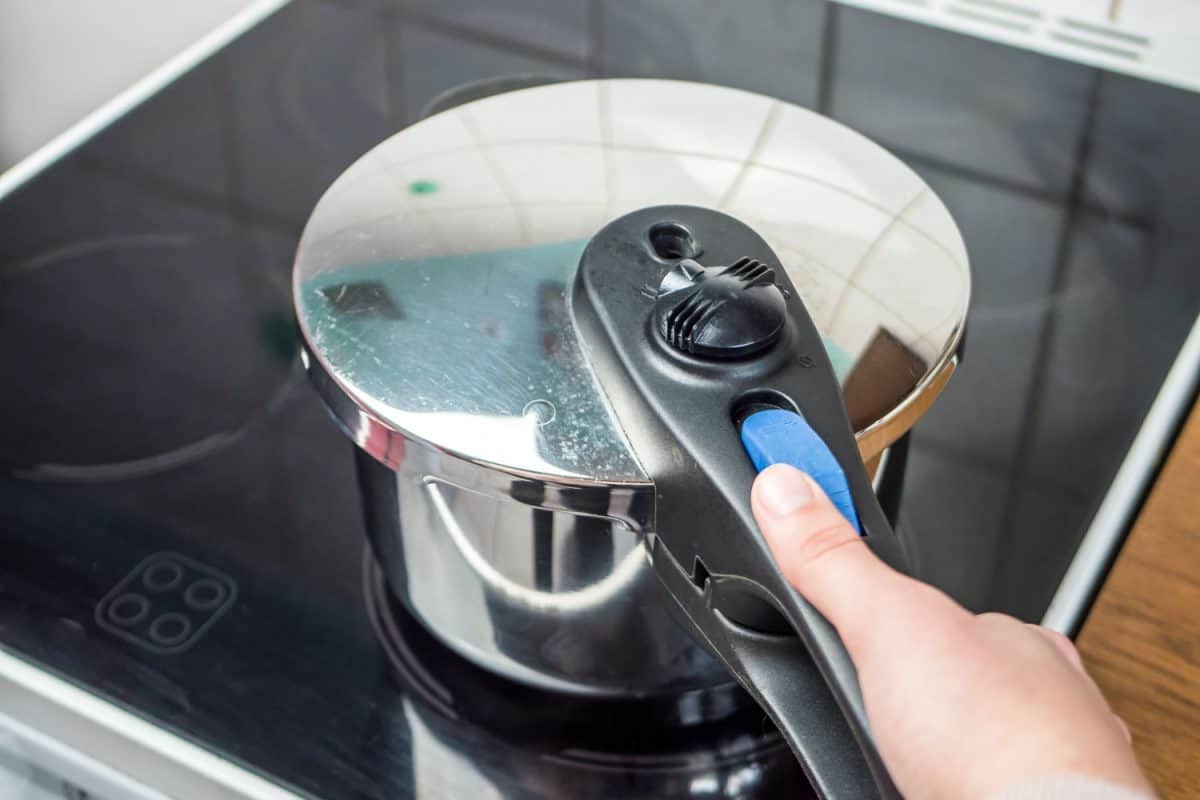 Knowing when your pressure cooker reaches pressure is essential, especially for stovetop pressure cooking. While the Futura might not whistle like some other models, you now know how to read the signs that the pressure is on. We've also seen how other designs indicate high pressure and what to do if yours is falling short.

All that's left to do is to find the next dish to pressurize to perfection. Happy cooking and may the pressure be in the pot, not on you.

How To Clean A Stainless Steel Coffee Percolator

How To Clean A Deep Fryer With Vinegar?