The Instant Pot is one of the latest "must-have" gadgets that seem to be in everyone's kitchens nowadays. If you're still in the market, you might be comparing it to the old stovetop pressure cooker your grandma had, so what, exactly, is the difference? Well, we've checked with gadget experts to find out.

The difference between a pressure cooker and an Instant Pot is primarily in safety and ease of use. Both use the same primary cooking method—generating steam and pressure.

A pressure cooker can achieve higher levels of pressure, measured as PSI. Meanwhile, an Instant Pot was invented to simplify pressure cooking, with built-in safety measures and advanced technology.

Keep reading, and we'll explain exactly how pressure cooking works and what makes the Instant Pot different. We'll cover some of the features that the Instant Pot offers and explore the capabilities of both appliances. With that said, let's dive right into this post! 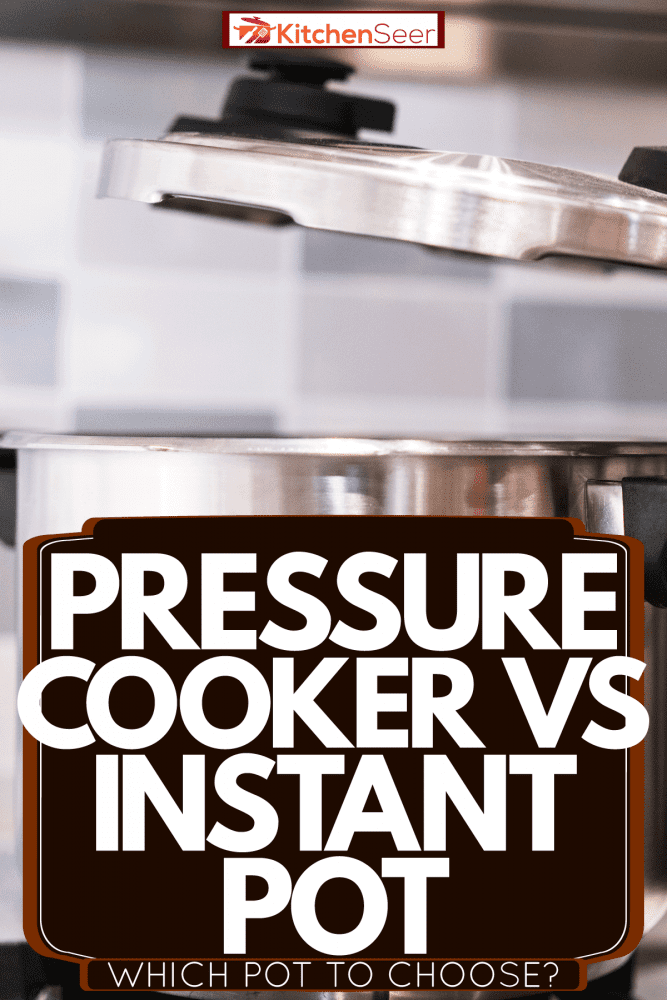 What Is The Difference Between A Pressure Cooker And An Instant Pot?

Think of the Instant Pot as a simplified pressure cooker. It was invented to have the same ease of use as other modern appliances, like the Crock-Pot. If you remember someone who had a stovetop pressure cooker, you might even recall the seemingly hundreds of safety rules that came along with it.

While pressure cookers can be a helpful tool, they usually require a user who knows what they're doing. Ultimately, an amateur can get hurt pretty easily while using one, so that's something to think about.

If the idea of having to remember a list of "don'ts" intimidates you, then that's where an Instant Pot can bridge the gap. It has plenty of built-in safety mechanisms, leaving less room for user error. 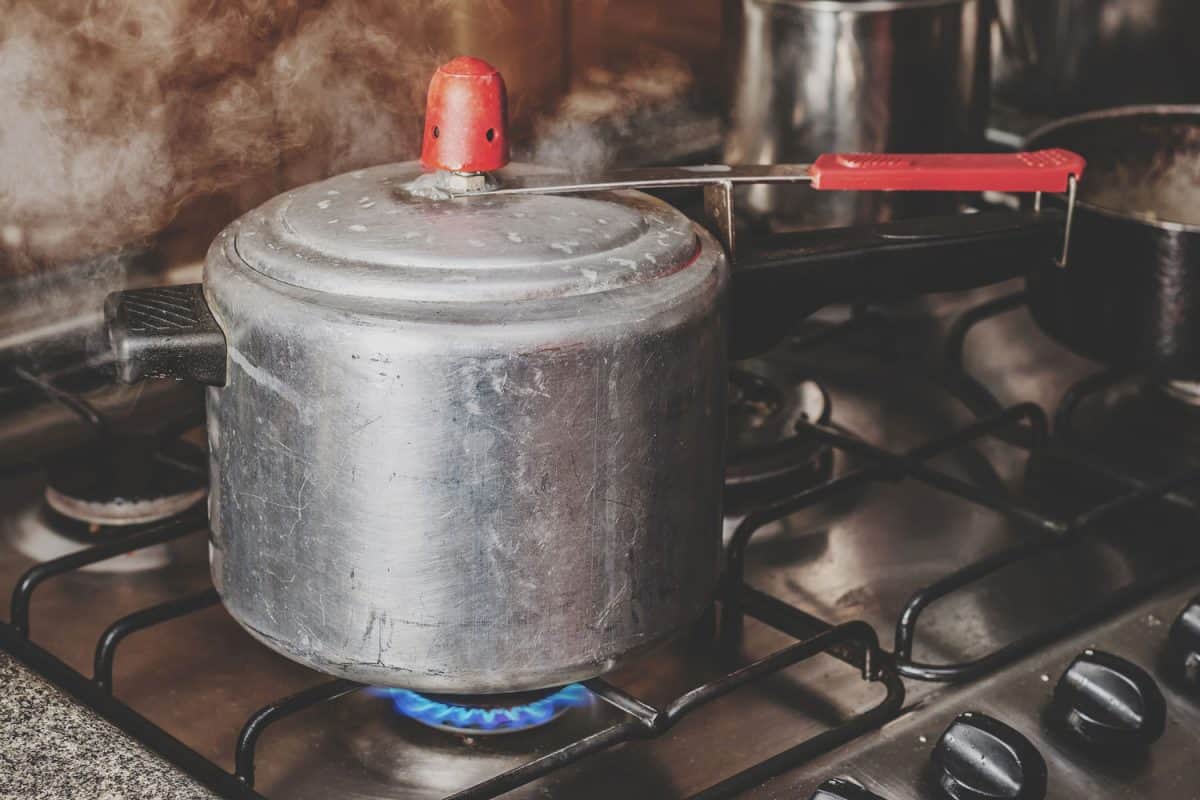 The Instant Pot also offers more advanced technology, such as WiFi connectivity in newer models. It also takes less intuition, thanks to a series of buttons that help determine the correct setting for you.

On the other hand, most Instant Pots only reach about 12 PSI of pressure, while pressure cookers can easily average 15, which is significant. As a result, there are some times where a stovetop pressure cooker shines - we'll get to those in a moment.

What Is An Instant Pot, And How Does It Work?

An Instant Pot is the name-brand version of an electric pressure cooker. It works through the same basic principle as any other pressure cooker but reduces overall cooking times.

The Instant Pot creates a tight seal, which doesn't allow steam to escape from inside it. Simply plug it in, add ingredients and liquid, and shut it securely.

An Instant Pot also offers more than just pressure cooking - for example, this model is a 7-in-1 tool. It works as a yogurt maker, rice cooker, and more.

Click here to see this Instant Pot on Amazon.

Advantages Of An Instant Pot

The steam and pressure of an Instant Pot make preparing food so efficient that it can reduce your cooking time by as much as 70%.

Traditional stove cooking can sometimes make it feel like you're eating the same, quick to prepare foods all week long. But the Instant Pot can be a real game-changer as far as opening up your menu options.

Like a Crock-Pot, you can prepare everything in advance if desired. Then pop it in when you get home and enjoy a fresh-tasting meal. Recipes such as ribs, which take hours in an oven, can be done in about half an hour in the Instant Pot, so this can be life-changing. 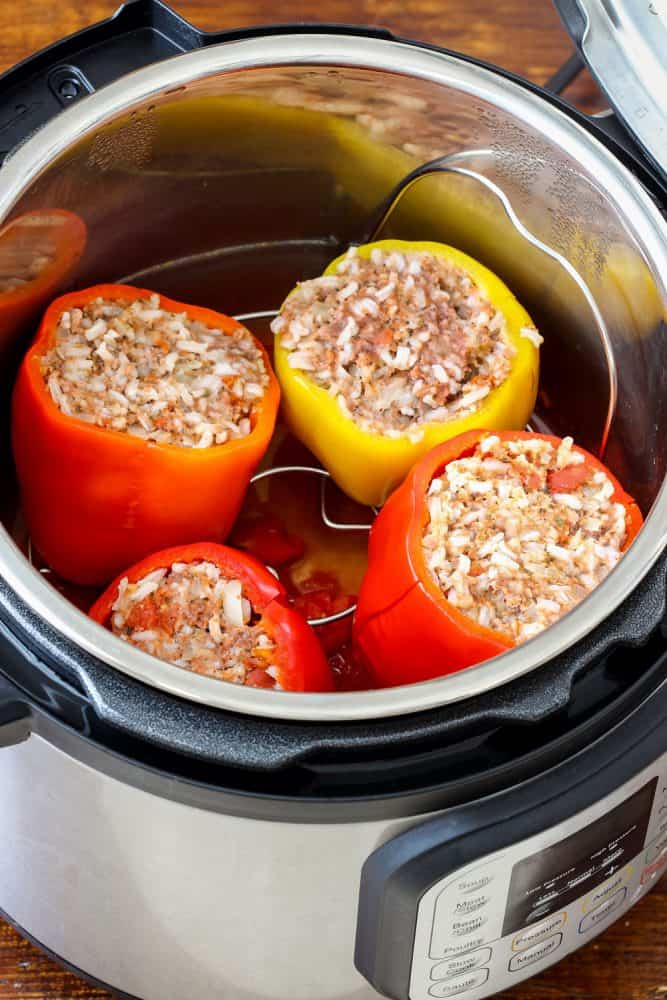 Just remember - it takes about 20 minutes for the Instant Pot to come up to the correct pressure for cooking. And there's also the process of releasing the steam after another 10 minutes or so.

The Instant Pot offers various security features, including a lid that locks while the pressure is high. This prevents you from accidentally removing the lid too early, risking a nasty burn or explosion.

It also has a vent for releasing steam, which is relatively easy to use. While you still need to follow a few common-sense rules and good practices, it leaves a lot less room for error compared to a traditional pressure cooker.

What Is A Pressure Cooker?

As we mentioned, the Instant Pot is a kind of pressure cooker. All pressure cookers work under the same basic principle - steam and pressure equal faster cooking.

Other pressure cookers typically can reach higher PSI than the Instant Pot, although they don't offer the same name/brand identity. If you're an experienced cook who knows what they're doing with a pressure cooker, this may be an important detail to you.

Pros And Cons Of A Pressure Cooker

There are some advanced cooking techniques, such as creating the browning and flavor associated with roasted foods, that you can't do in an Instant Pot. The higher PSI also reduces cooking time further, but that's often only a few minutes or so. 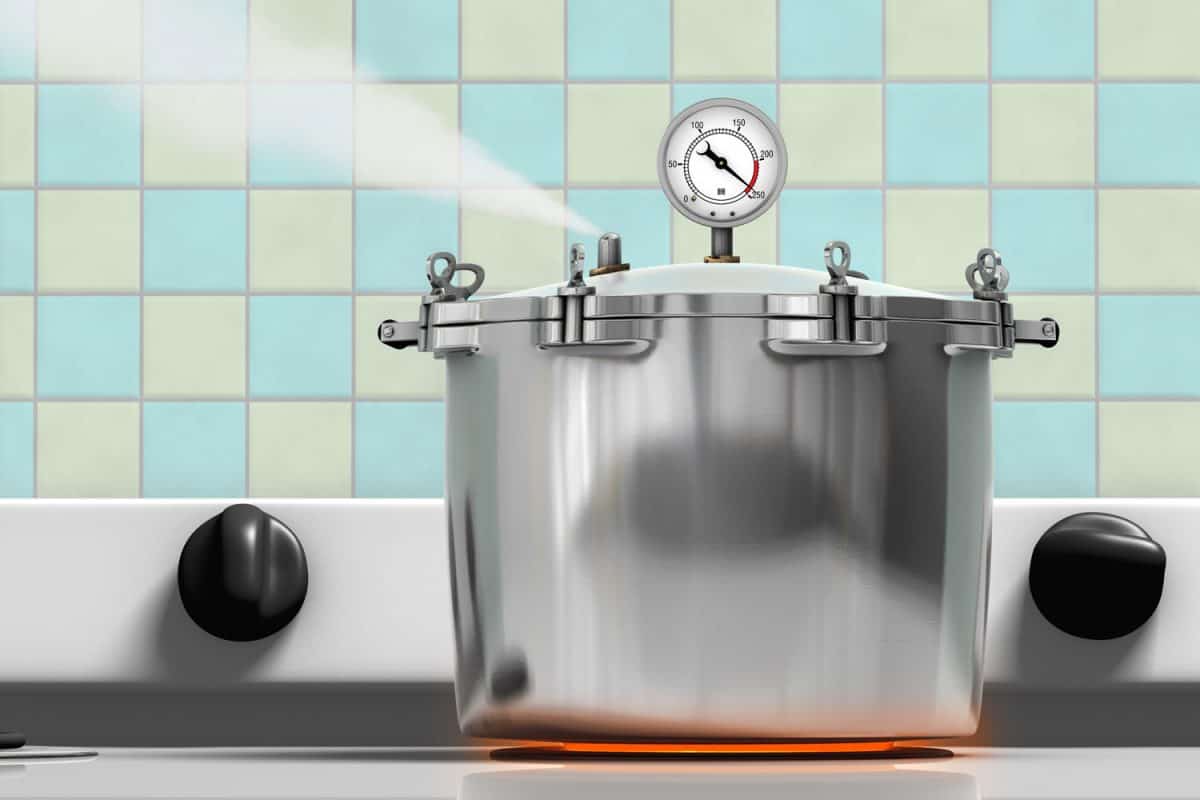 Stovetop pressure cookers also don't use the same technology. For example, there is no button for "saute" or "stew," so you'll have to know the times yourself. Again, this isn't major but can make a big difference for newer or less tech-savvy chefs.

Along with that, there aren't the same safety features. A pressure cooker will not automatically turn off when it's done like an Instant Pot, so you need to be more attentive to your appliance. A pressure cooker also won't release the steam for you, so that's another detail to keep in mind. 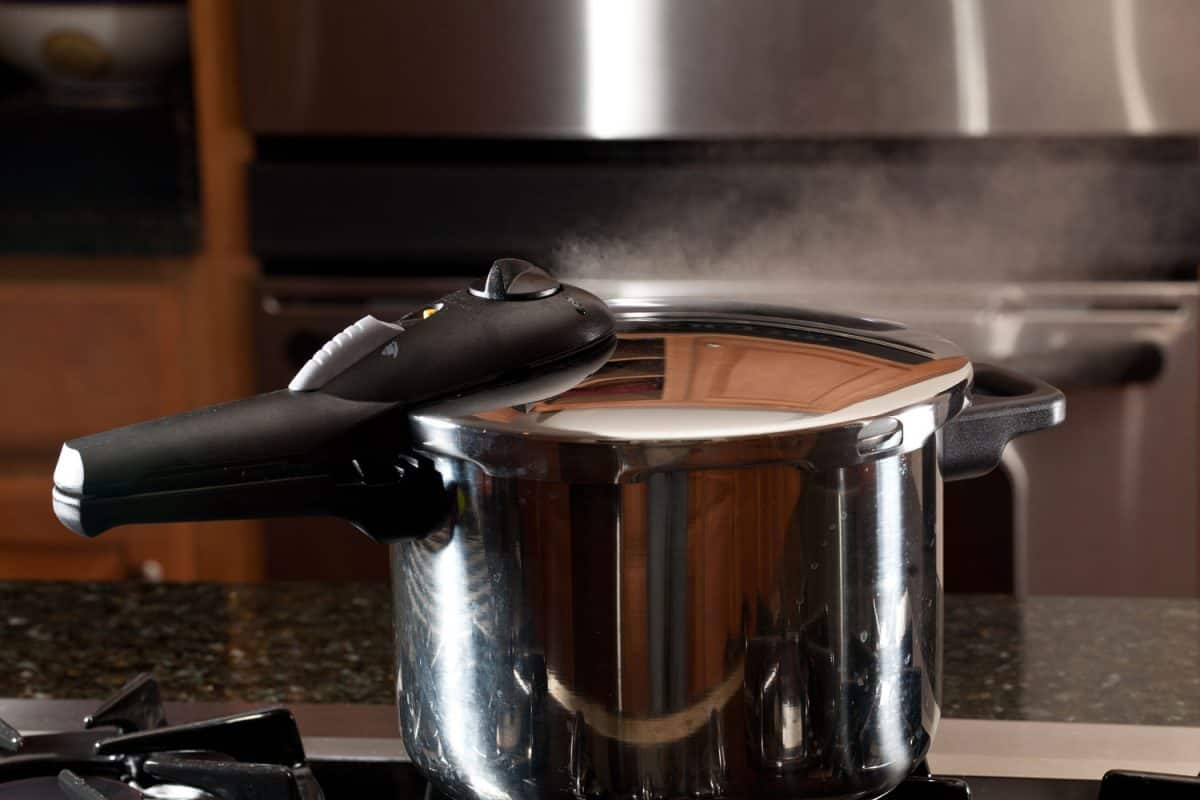 As a result, an amateur should probably stick with the advanced safety of the Instant Pot - or get a good education on the best practices of a pressure cooker before using one.

That said, someone who knows what they're doing will probably find things they can do with a pressure cooker that they can't do with an Instant Pot, so there are benefits to both appliances.

Can You Use A Pressure Cooker Instead Of An Instant Pot?

For preparing dinner, a pressure cooker can do mostly the same things an Instant Pot can. For most cooks, it comes down to a matter of convenience.

It's also worth mentioning that there are some things you can do with a pressure cooker that you can't do in an instant pot - for example, pressure canning.

A pressure cooker is also useable as a regular stovetop pot if needed and tends to come in more sizes, so those are things to consider. 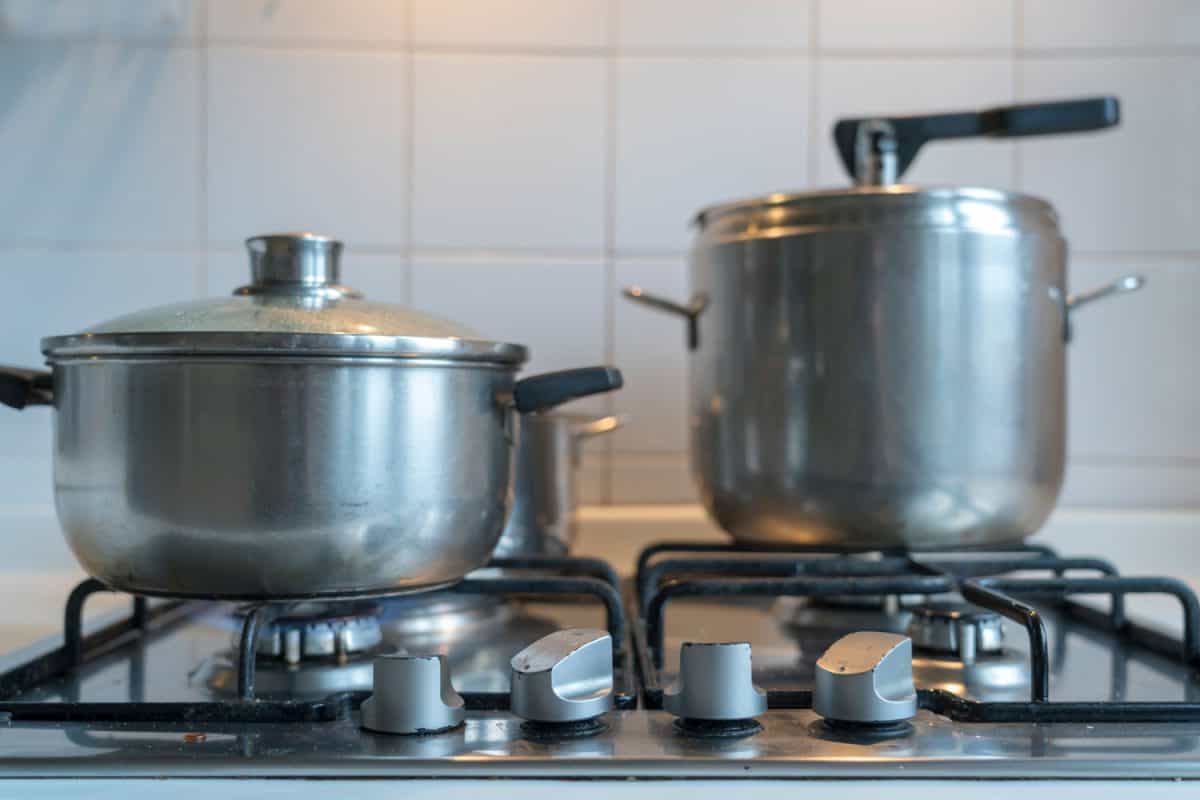 On the other hand, you can do a few things with the Instant Pot but not a pressure cooker. For example, the Instant Pot combines additional tools, such as a rice cooker or a yogurt maker, which is a great bonus.

However, these exceptions are few and far between. Aside from very specialized tasks like these, these two kitchen tools will work for mostly the same things.

In general, a pressure cooker and an Instant Pot operate similarly. They use high levels of pressure and steam to increase the overall temperature, reducing cooking times.

If you like being very hands-on while cooking and don't mind controlling the pressure cooker, you may prefer the traditional pressure cooker. For someone who prefers being able to push a button and walk away, the Instant Pot is probably the right tool for you.

Made it to the end? Check out these helpful related kitchen posts down below!

Kitchen Aid Food Processor Not Working – What Could Be Wrong?

Can Rice Cookers Cook Brown Rice? [And How to]

What Are The Parts Of A Blender?