Getting the gist of how a machine works requires time. It's the same thought process with pressure cookers. One aspect you might be curious about is if a pressure cooker reduces liquid. If that's what you're wondering, we've researched the matter for you!

Pressure cookers do reduce the liquid inside the machine. However, it does so in small quantities through its release valve. It does this to build up to the correct pressure to cook your food. For this reason, there is usually a minimum amount of liquid necessary for the cooker to operate.

So, if pressure cookers remove liquid, is there a chance it will run out of it? If so, what happens if the machine runs out of liquid? Can it explode? These are some of the topics we discuss further ahead! 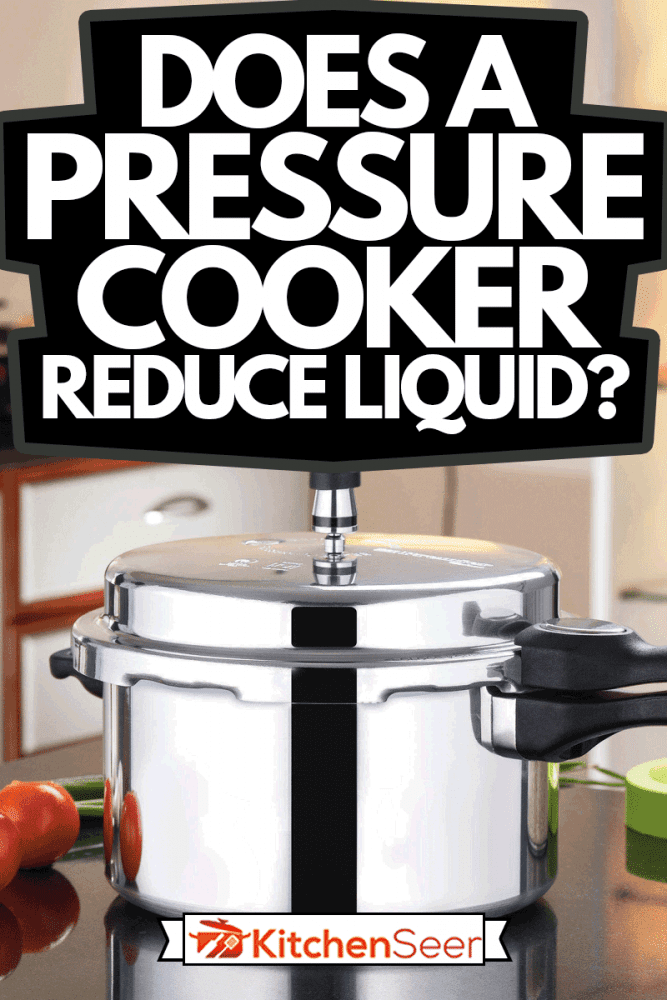 How a Pressure Cooker Works 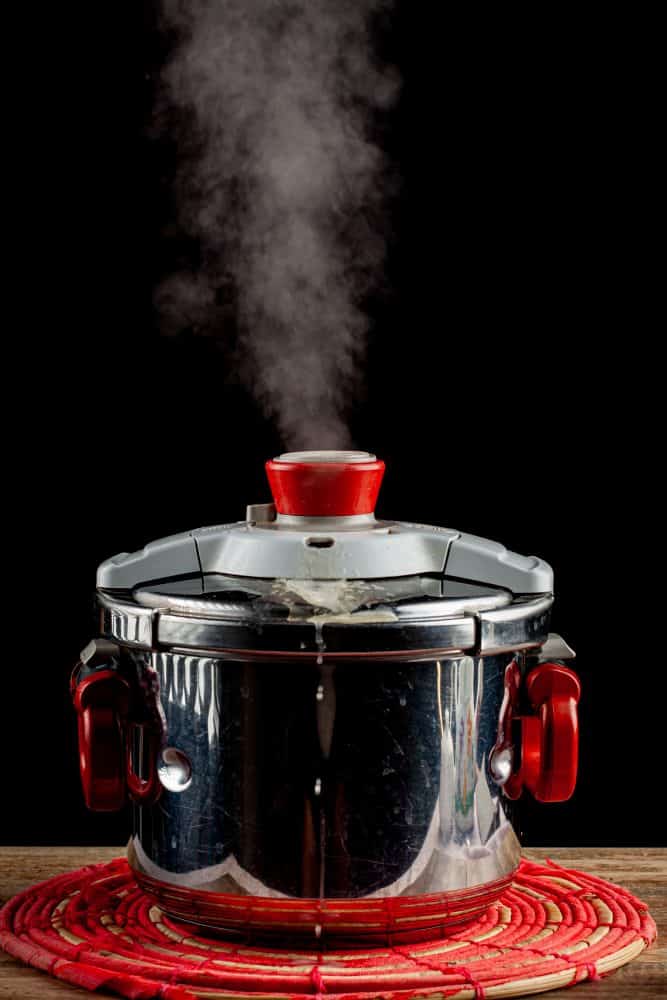 We need to learn how a pressure cooker works to understand why it removes minimal amounts of liquid. In general, most pressure cookers have the same basic design. They have a thick base that allows for an even distribution of heat.

They will also have a semi-sealed lid with a rubber gasket. The gasket is an essential component of the cooker. If it's not seated correctly or if you forget to put it back after cleaning, it won't let the pressure cooker get up to pressure.

The water inside a pressure cooker will need more energy to turn into vapor. This process increases the temperature inside the pot. All in all, it creates a hot and moist environment that allows for fast cooking.

What Happens to Liquid in a Pressure Cooker? 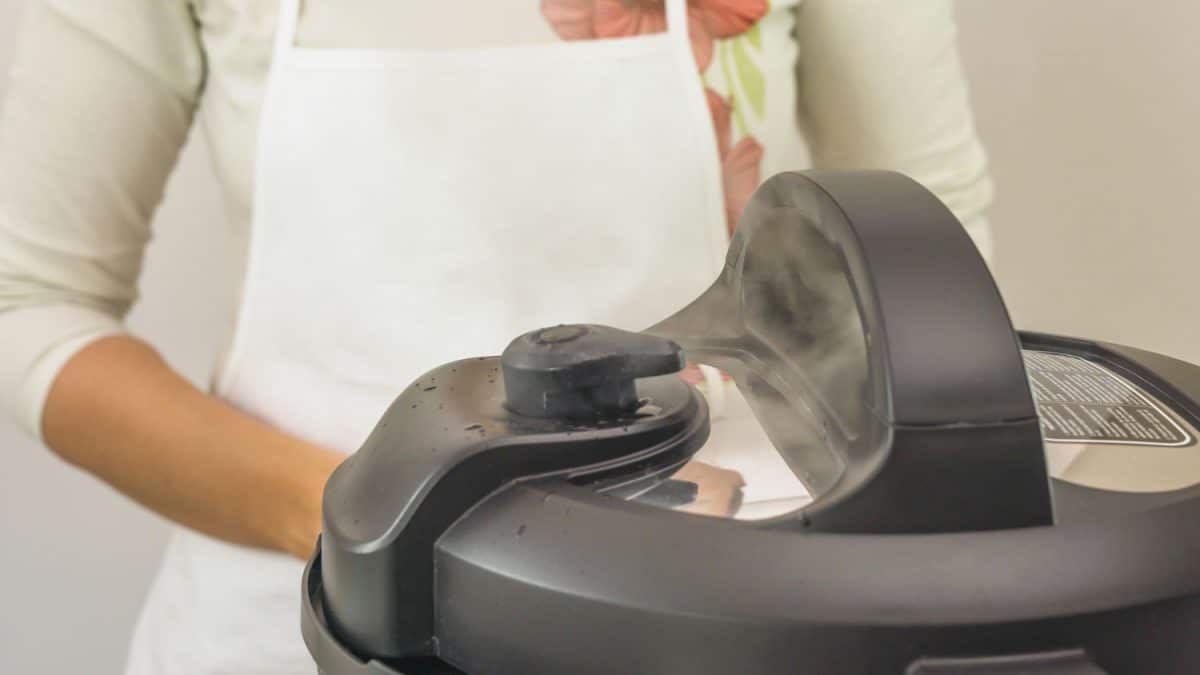 One detail you might have noticed is that water needs more energy to turn into vapor inside a pressure cooker. The other detail you need to pay attention to is the release valve that maintains pressure. Why are these two important?

Accordingly, it will collect above the food. These trapped water molecules are what increase the pressure inside. In other words, as steam builds, pressure increases.

What Does Liquid Have To Do With Pressure and Cooking?

In a pressure cooker, pressure increases by 15 to 30 psi. This process pushes the boiling point of water from 212 degrees to 250 degrees Fahrenheit. It makes cooking quicker - but what role does water play in this?

The minimum requirement of water that you pour in will convert into steam. Since the pot is airtight, these trapped water molecules will increase the pressure inside. Once there's enough pressure inside, the high-pressure steam transfers heat to the surface of any food that is not submerged in liquid.

When you begin heating the pot, the valve at the top will be open. But, as vapor expands, it will slowly close off the vent. And, if you're wondering if steam can escape from the sides of the lid, it can't! The rubber gasket seals it tight enough.

There are only a few ways for the excess steam/liquid to escape. To some, this might seem a little dangerous. What does this mean if the cooker manages to produce more pressure than it can handle?

Once it reaches very high pressures, the valve will rise farther. This action essentially reopens the vent to allow the excess to escape. So, if you thought it would blow up, it wouldn't!

In the past, that might have been the case. But, modern pressure cookers have safety features to prevent explosions from happening.

Bringing It All Together

That's a lot of information to take in all at once. So, to clear up the details, let's summarize how a pressure cooker works.

You start by putting in all the food you'll be cooking in the pressure cooker. Then, you add the minimum amount of water necessary for your pot. Once you're ready, you can close the lid and apply heat.

Electric pressure cookers will have instructions by recipe. Stovetop cookers will need to be put on a stove on high heat to begin the process.

As heat rises, it will begin to build pressure. The steam will also start to simmer the food. Old models will have steam coming out of a vent. A weighted regular will begin to shake too. The scary part about this process is the hissing sound accompanying the steam escaping.

Modern versions of pressure cookers will have a pressure indicator to show the conditions inside the pot.

If you'd like a visual demonstration of how old pressure cookers work, here's a YouTube video to paint a clearer picture:

As you can see in the video, there is a lot of steam that escapes as the pot builds pressure. It indicates that you have to turn down the heat. Then, it will release more. At this point, the person in the video turns off the heat.

For the best results, always consult the user's manual to learn how to operate it correctly. At this point, you should have an idea of where the liquid goes when you use it in a pressure cooker!

How Much Water Does a Pressure Cooker Lose?

The amount of water lost during the cooking process is minimal. Pressure cookers won't allow most of it to escape. As mentioned, there's a rubber gasket that will seal the pot completely.

Once it builds pressure, it will let excess steam out of a valve. How much water you put inside would it lose? There isn't a conclusive answer to give you an exact amount.

The consensus is that it will lose a small amount of water. It does this to keep the internal pressure at a safe level.

How Much Liquid Do You Put in a Pressure Cooker?

The amount of liquid you need in a pressure cooker would depend on the recipe. If you have your manual, the manufacturers will have specific instructions for you to follow. In general, some would suggest not filling the pressure cooker more than half full with liquid.

For a minimum limit, the general recommendation to get a pressure cooker working is to use one cup of water. When you're more comfortable using a pressure cooker, you can play around with how much water you need to put inside.

Foods - like a tomato - carry liquid. The liquid content of the food also counts towards the total volume inside a pressure cooker. Though, your experience may vary. More users have experienced good results using slightly less water in an Instant Pot than your traditional pressure cooker.

Can You Put Too Much Water in a Pressure Cooker?

Since there's a minimum amount of water necessary to make the pressure cooker work, it begs the question, can you put in too much water?

Unfortunately, yes, you can! Adding too much liquid in a pressure cooker can result in a dish lacking flavor. If you're using sauce, it will become too thin.

Others would suggest that adding too much water to a pressure cooker could overflow the gasket and release valve. As far as cooking goes, it can make cooking times longer. In the best case, if you manage to use a bit more water than a recipe recommends, your food will come out slightly watery.

If you feel like you've added too much water, there are some ways to reduce the impact it can have on your food. The first method would be to stop the cooking process. You'll need to release steam as instructed by your user manual.

Then, manually remove water as necessary. If it's already too far into the cooking process, there's nothing more to do than wait it out. Fixing the result would involve using ingredients that will absorb the excess liquid.

Other than that, you'll have to play around with the amount of water you add to ensure you get better results next time. 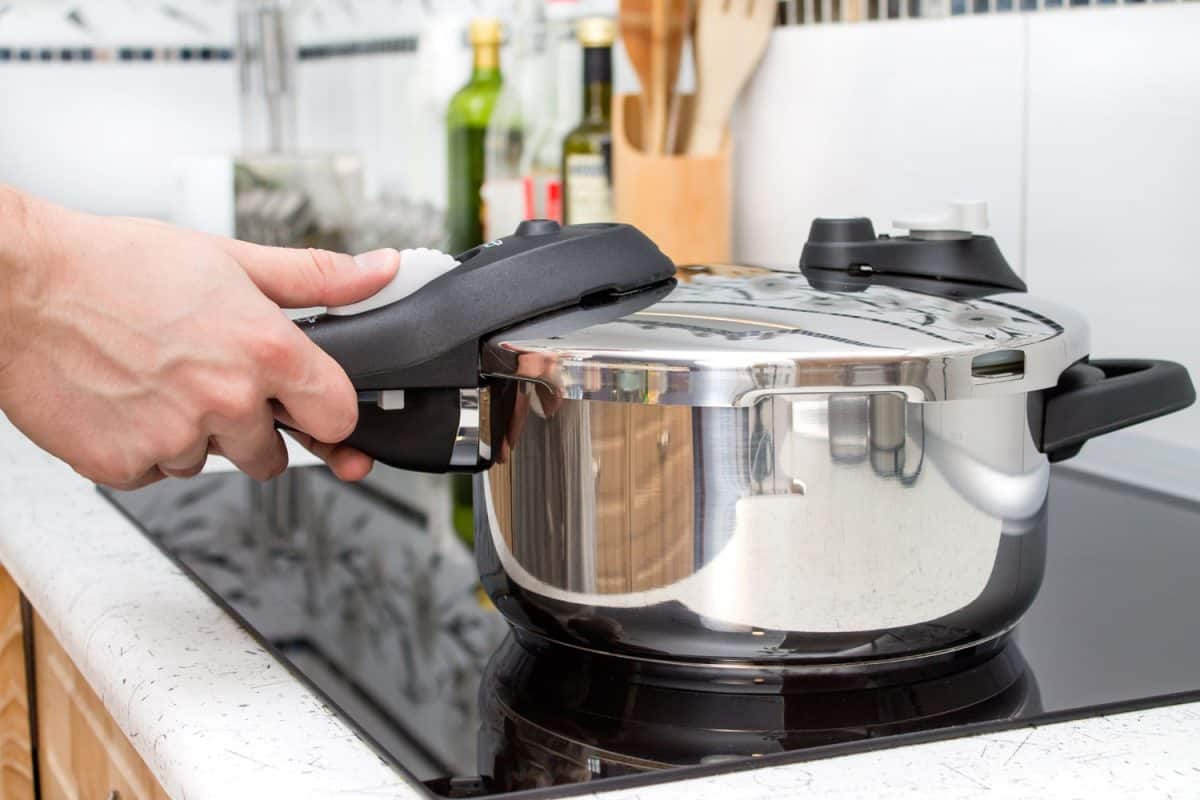 When you're exploring new tools to use in your kitchen, the pressure cooker might be confusing to learn. More specifically, the way liquid works in one can be a bit scary.

Since you can't open it once it's cooking, it might be anxiety-inducing to think about it running out of liquid. Fortunately, it doesn't lose much! Before you go, do you have other pressure cooker concerns? Is your pressure cooker leaking steam? If you'd like to find out why, check out our post:

Should A Pressure Cooker Leak Steam?

Is it hissing or making noises in general? To learn more about this situation, check out our post:

Should A Pressure Cooker Hiss Or Make Noise?

What Kind Of Beverages Can You Make With A Keurig? [Inc. Sample Recipes!]

How To Store Food Processor Blades