Over the years, the devices we use to prepare foods have become faster and more efficient. Of these, the pressure cooker and rice cooker might be two of the more convenient and time-saving kitchen appliances. You may be wondering which one is better? Well, we have studied these machines and have some answers for you.

Whether to use a rice cooker or pressure cooker will depend on what you need to cook how much time you have. This choice can also depend on how much money you want to spend on your appliance. To find the best option for you, consider these points:

Having the right tools in your kitchen is important so you can prepare your meals with the best quality while saving time and energy. We'll discuss which cooker is the best for your situation and the most inexpensive one. Keep reading as we break down the differences between each appliance and how to use them. 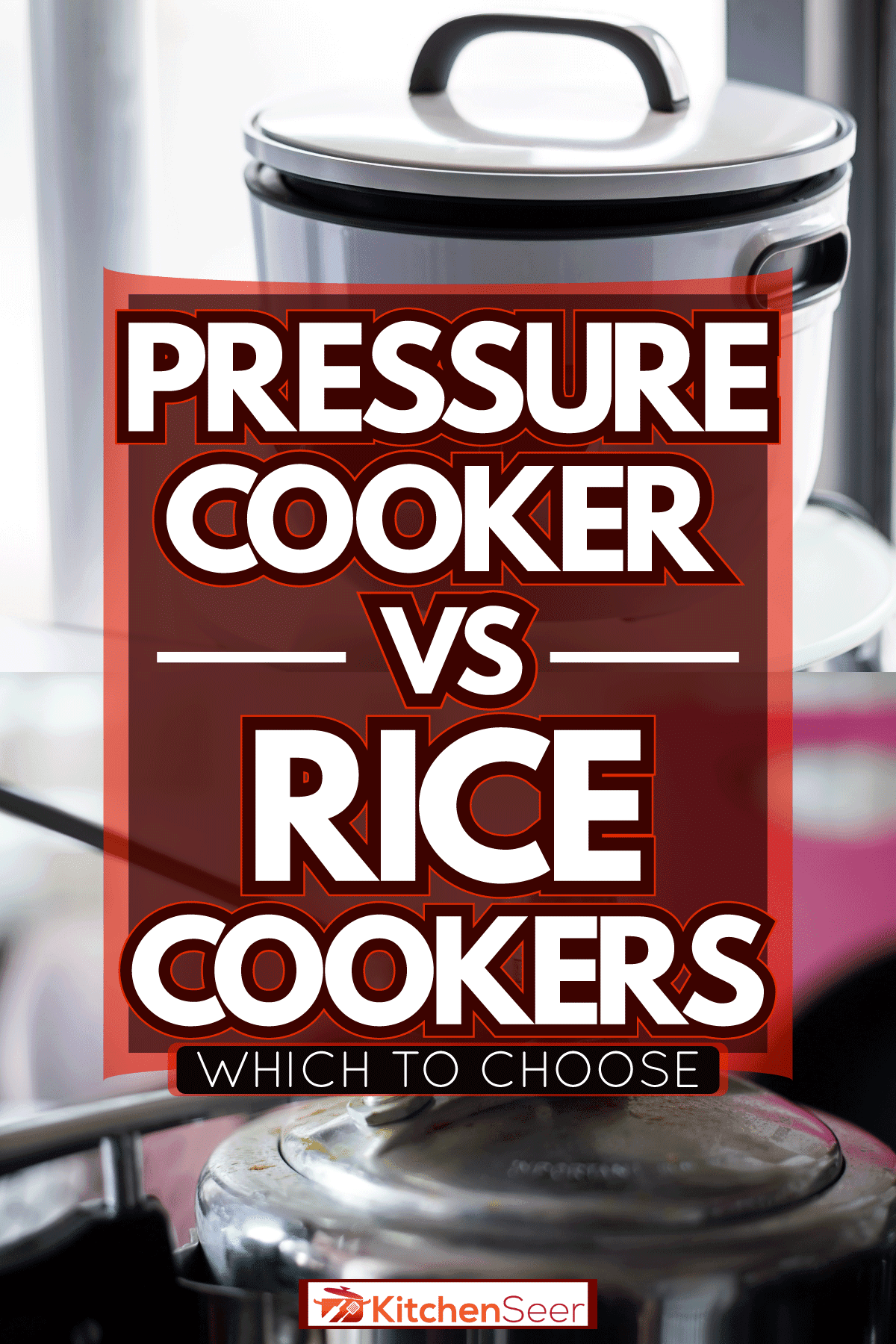 Is A Pressure Cooker Or A Rice Cooker Better?

Rice and pressure cookers can be used for everything from simple rice and other grains to pasta. Some even come with inserts for cooking more than one item or steaming.

At its most basic function, a rice cooker heats water and ingredients while trapping and releasing steam to turn out perfectly steamed rice. It will not build pressure. Rice usually takes around 15 minutes to cook using this method.

An electric pressure cooker has a sealing ring inside the lid, which creates a completely airtight seal that allows pressure to build once the lid is locked and the pan is heated. Once cooking is completed, you can release pressure at the rate you select by opening the valve.

The best option for your kitchen will depend mainly on what foods you typically prepare. Though both appliances provide a convenient way to make dishes, in a comparison between the two, we find the electric pressure cooker to be the better purchase.

What Are The Disadvantages Of Pressure Cooking?

Though pressure cooking may be one of the healthiest methods of preparing food, there are a few things you'll want to look out for. In general, there is a learning curve, and some devices can be complicated to use. Always refer to your product's manual for best practices.

Stovetop pressure cookers cook quickly and run the chance of severely burning food if not monitored. They can also be dangerous if not used correctly.

What Is The Best Type Of Pressure Cooker? 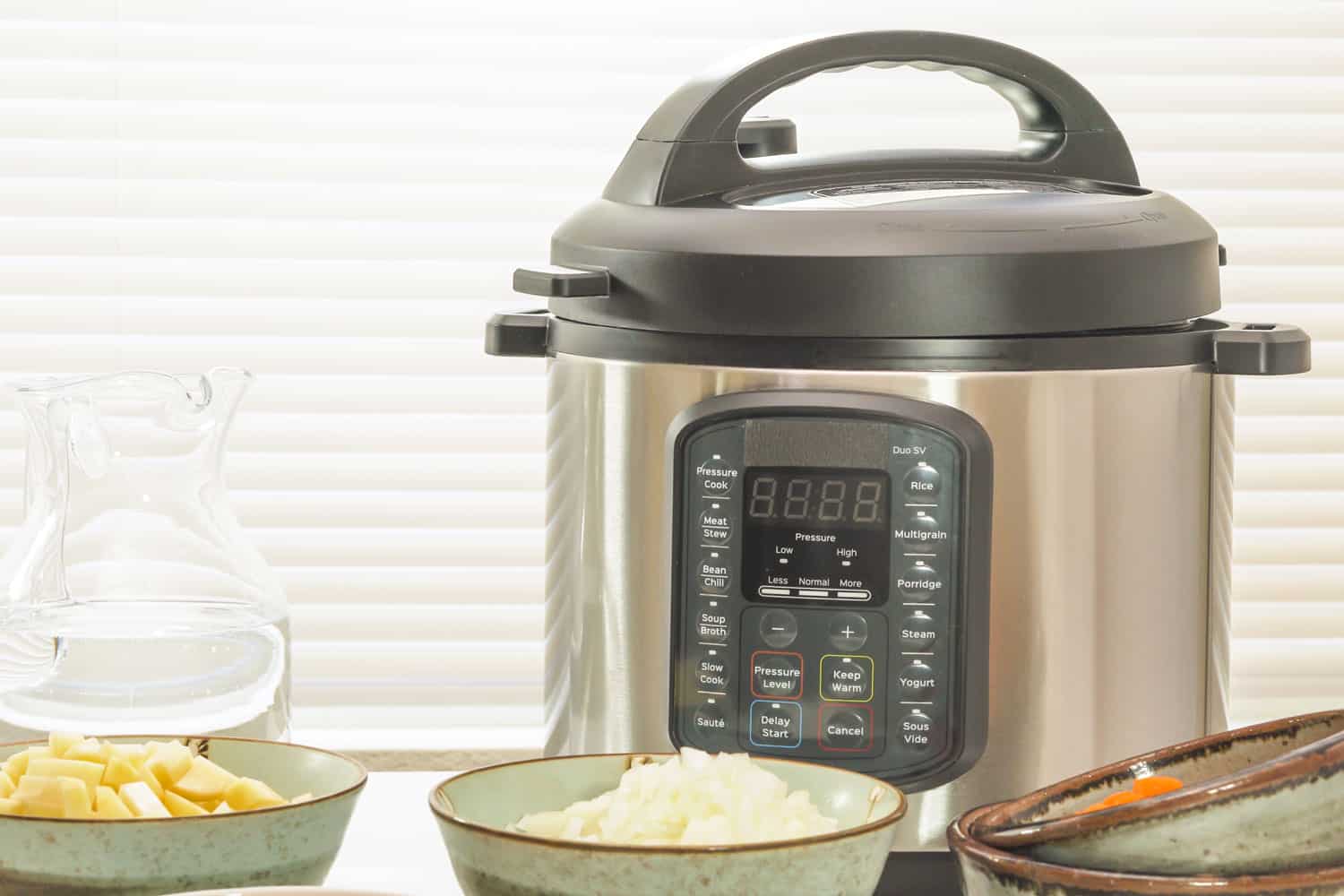 They have many functions and are evolving from year to year. They can now prepare everything from yogurt to beans. Some can even air fry and brown food.

This Ninja Foodi pressure cooker will steam, slow cook, air-fry, and more. Its 12 programs may replace a rice cooker and several other appliances.

See this pressure cooker on Amazon.

How To Cook Rice Perfectly In A Pressure Cooker 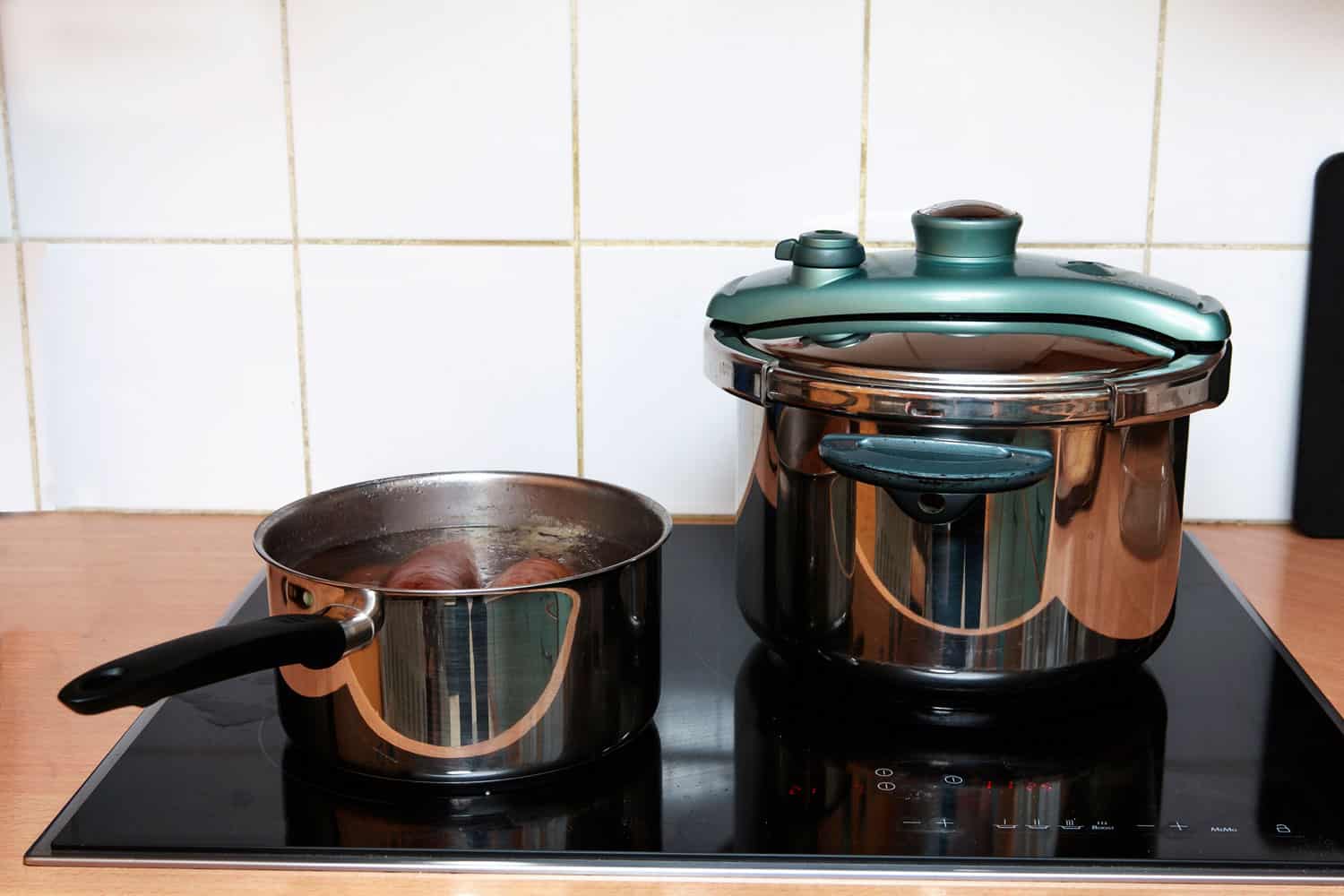 Under pressure, white rice can cook in as little as four minutes. The amount of rice and water in a pot will determine how long it takes to reach full pressure, with fuller pots taking longer. Root vegetables and whole grains like brown rice can cook in under ten minutes.

If you are using the pressure cooker to soften root vegetables, use one cup of water. For grains, use a one cup-to-one cup ratio unless it's for whole grains like brown rice, then add a quarter to a half cup more water for every cup. Some pressure cooker instructions say that you don't need the extra water if you add more cooking time.

To take the guesswork out of using a pressure cooker for many kitchen tasks, get one that has the functions programmed already! This popular pressure cooker not only has a setting for cooking rice and grains but can also stew and has a separate function for meats.

Can You Use A Rice Cooker Instead Of A Pressure Cooker?

Though rice cookers are used for many different foods, there are some items you should only prepare using a pressure cooker.

Since a rice cooker cannot cook at high pressure and break down fibers and tough meats, we don't recommend using a rice cooker for long-process meals.

You also want to avoid cooking things like beans or roasts unless your rice cooker also slow cooks, so make sure to keep that in mind.

Which Should I Use For Tough Meats And Legumes: Pressure Cooker Or Rice Cooker? 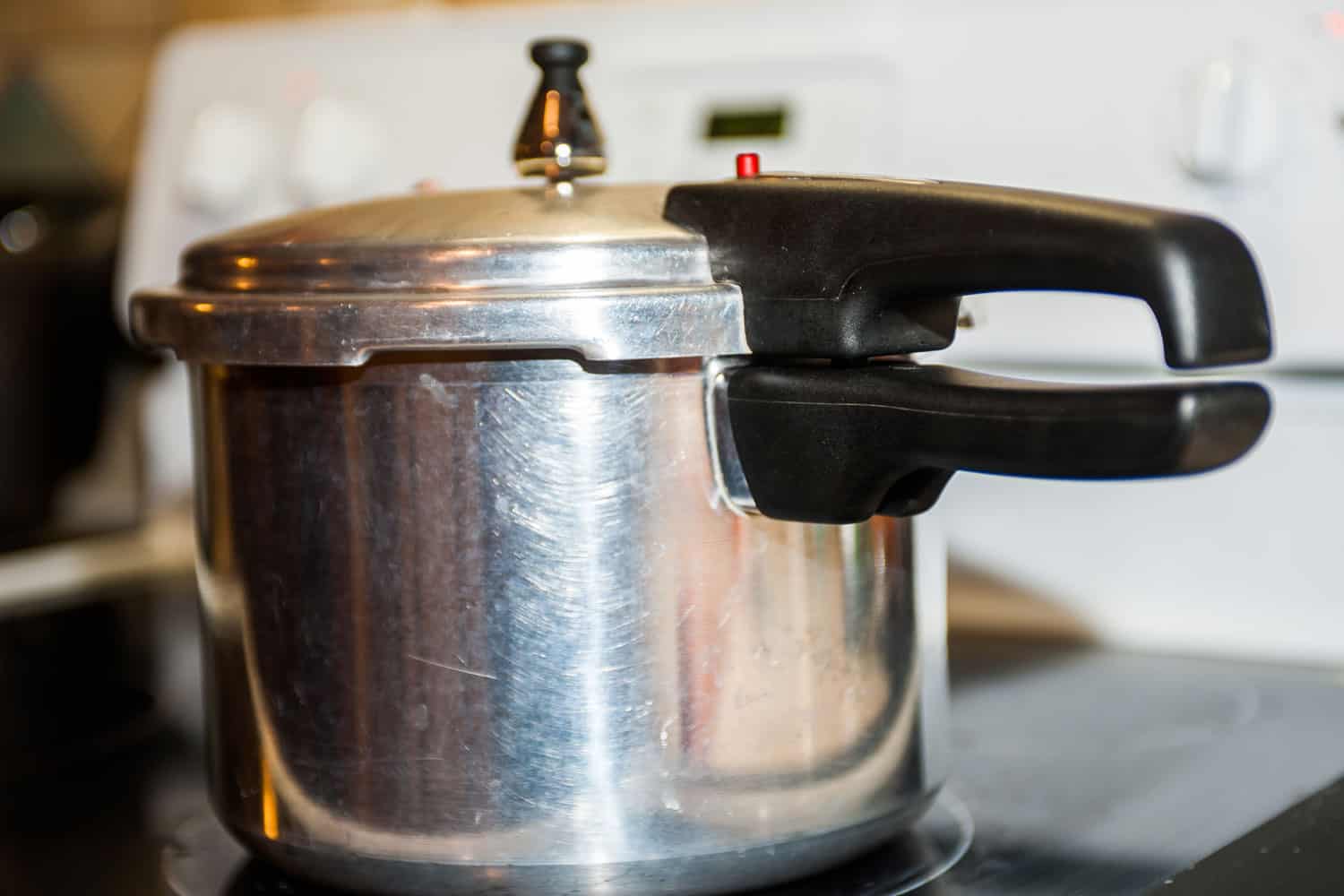 A pressure cooker is better than a rice cooker for tough meats and legumes since once it gains pressure, it can break them down in 30 minutes or less.

To use a pressure cooker safely, you'll want to make sure you have at least a cup of water. Depending on the dish, you may need more. Next, saute your seasonings and aromatic veggies first with the lid off. If you are cooking meat like a roast, brown it first with any veggies and seasoning, and then add water.

To cook meats, add about half the level of water. Add more for a soup or a little less to precook a roast. Once your pan reaches high pressure, meats and stews can cook for 30-60 minutes. Pressure cooking meats and vegetables together can make a one-pot dish without the hours of oven baking.

To cook beans, use four cups of water for every cup of beans. If using seasonings and veggies, saute first, then add beans and water. Legumes are usually ready in under 30 minutes after high pressure is reached.

What Should I Use To Cook Large Quantities?

You want to stick with a pressure cooker, specifically a stovetop option for those wanting to make bigger meals. Generally, an electric pressure cooker holds around eight-quart capacity, with a few brands reaching 12 quarts, which won't be enough for large quantities.

What Appliance Is Cheapest For Cooking Grains? 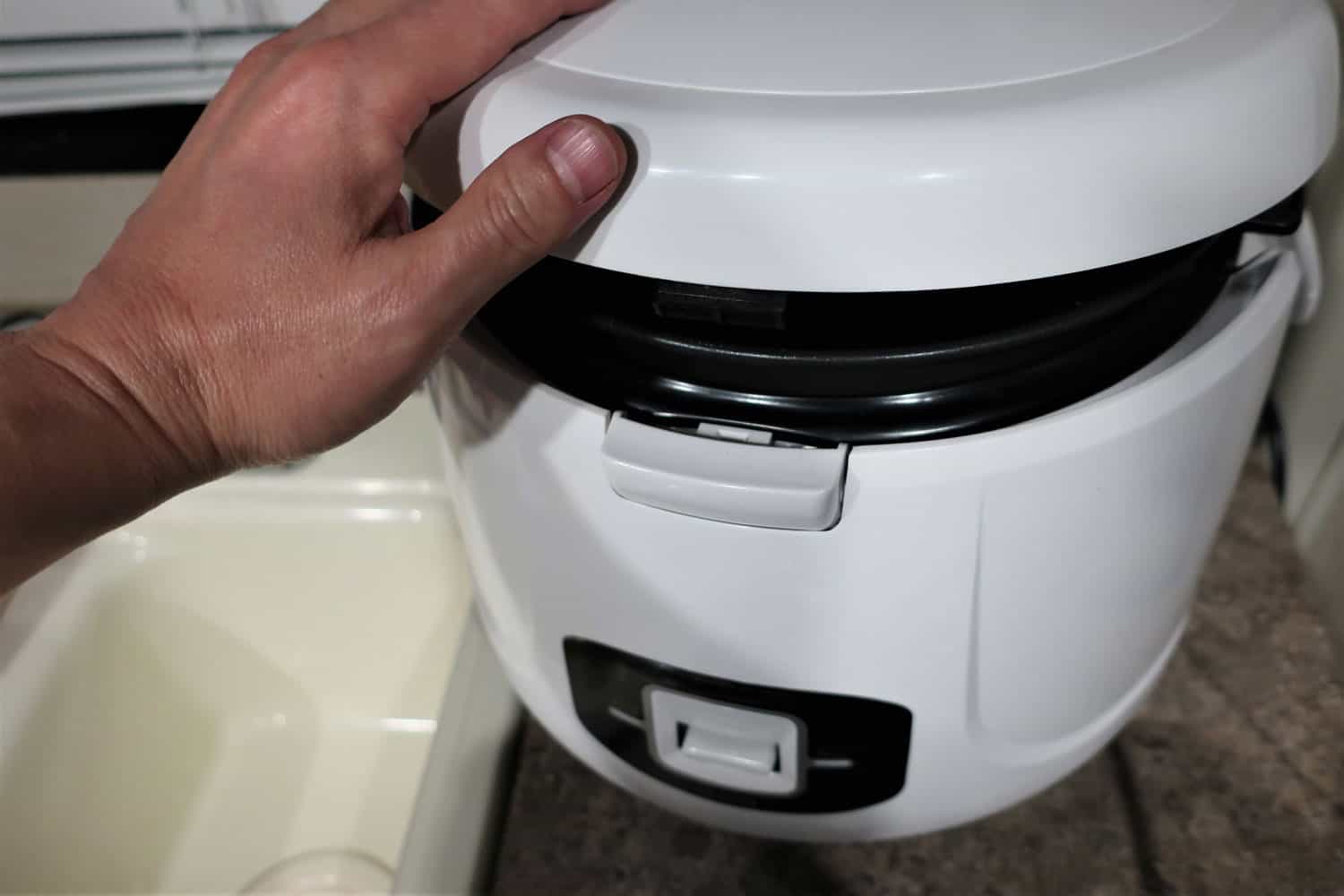 If you want to keep your upfront costs low and don't plan on using your appliance for cooking dried beans or meat, then a rice cooker is the best option.

That said, you can get this rice cooker that yields six cups of cooked rice in under 15 minutes for under 20 dollars, which is impressive.

Rice cookers can be less bulky and are great for limited counter space like studio apartments. If you travel a lot, you may also want to take one with you to make anything from ramen noodles to pancakes.

Rice makers can come in smaller sizes since they do not need space to build pressure. This small rice cooker will take up very little counter space and be easily stored after use.

It's great for meals for one or two people and travels easily.

Check out this mini rice cooker on Amazon.

Can You Cook Frozen Food In A Pressure Cooker?

Both pressure cookers and rice cookers may be used to cook frozen food. It's important to note that most frozen vegetables will cook very quickly in a pressure cooker, so keep that in mind.

We recommend using an electric pressure cooker with a steam function to avoid overcooking your frozen food. Meats can also be placed into a pressure cooker frozen, but experienced cooks disagree on whether this is a good practice.

Some say you want to brown them first or partially thaw for the best flavor. For example, cooking frozen meats like chicken in a pressure cooker can cause your meal to lose some of its taste.

Other cooks state that larger cuts of meat should be thawed completely due to the possibility that they'll cook on the outside while staying raw on the inside.

That said, the consensus seems to be that smaller poultry and thinner cuts or small chunks of frozen meat are fine to prepare in a pressure cooker. 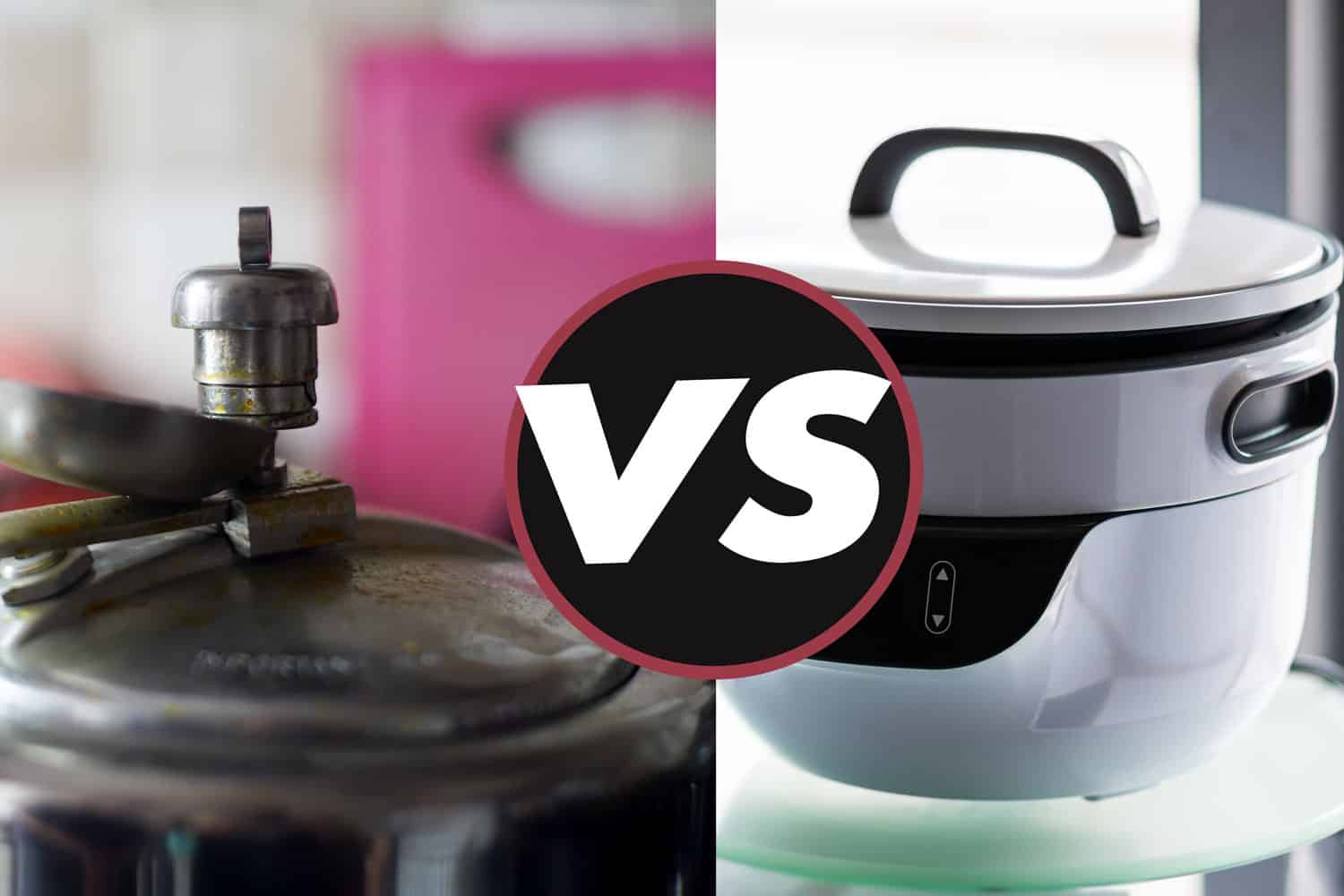 What Are The Different Models Of Ninja Foodi?

How Long To Cook Chicken In A Pressure Cooker?

How Many Drawers Should A Kitchen Have?

Can Corelle Or Corningware Be Kashered?

How To Reset A Samsung Fridge In 4 Steps