Rice cookers make preparing perfect rice a breeze. Most rice cookers come with their own measuring cup, but you may have noticed that this cup isn't the same as your other kitchen measuring cups. So what volume is the typical rice cooker measuring cup? We've researched this topic thoroughly, and here's the scoop:

The standard rice cooker measuring cup is 180 ml (3/4 cups). This is the amount of dry rice needed to make a single serving of cooked rice in a rice cooker. 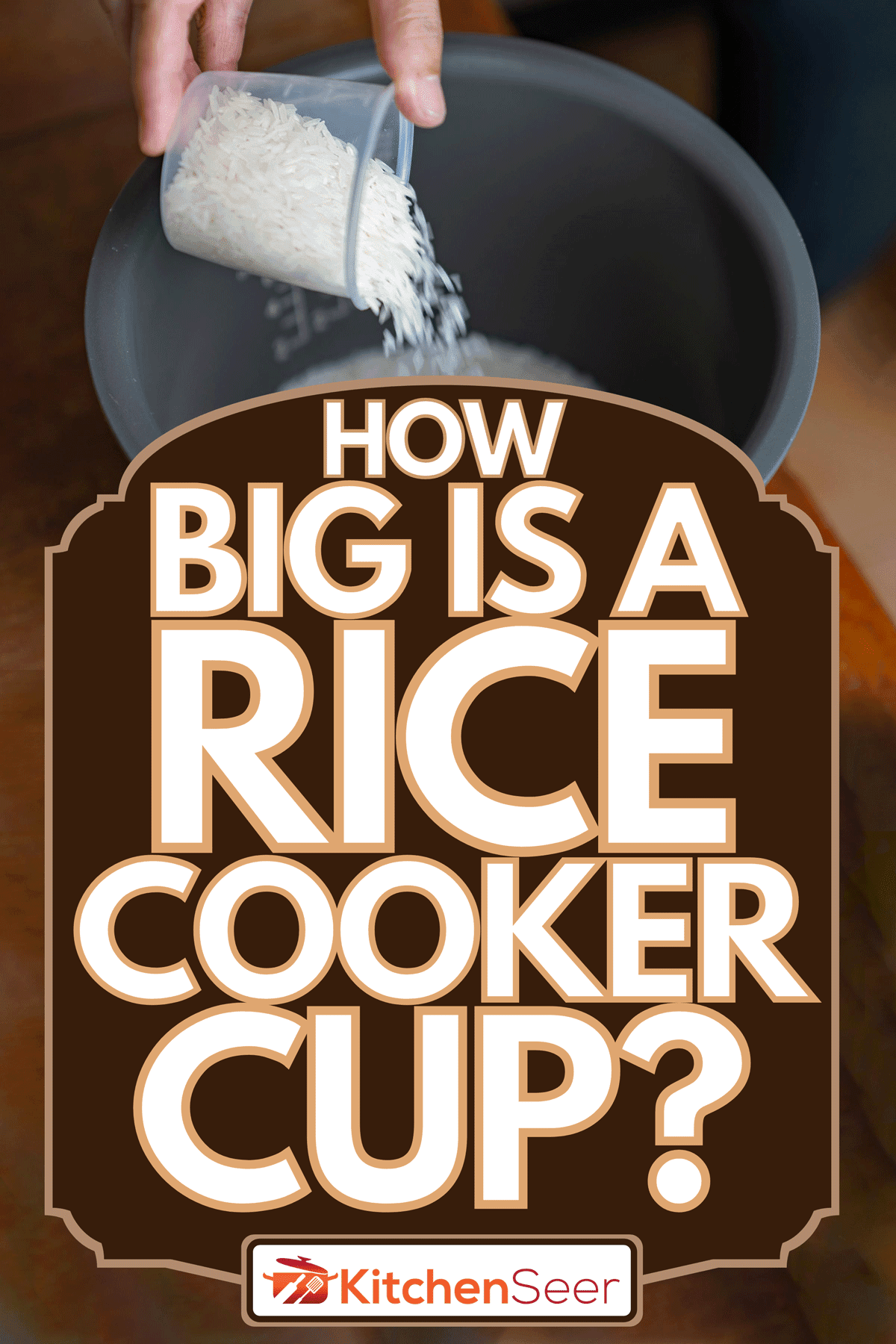 How do you use a rice cooker measuring cup?

While the size of the rice cooker measuring cup may seem a bit idiosyncratic, it is easy to use when making rice. Simply follow these easy steps. 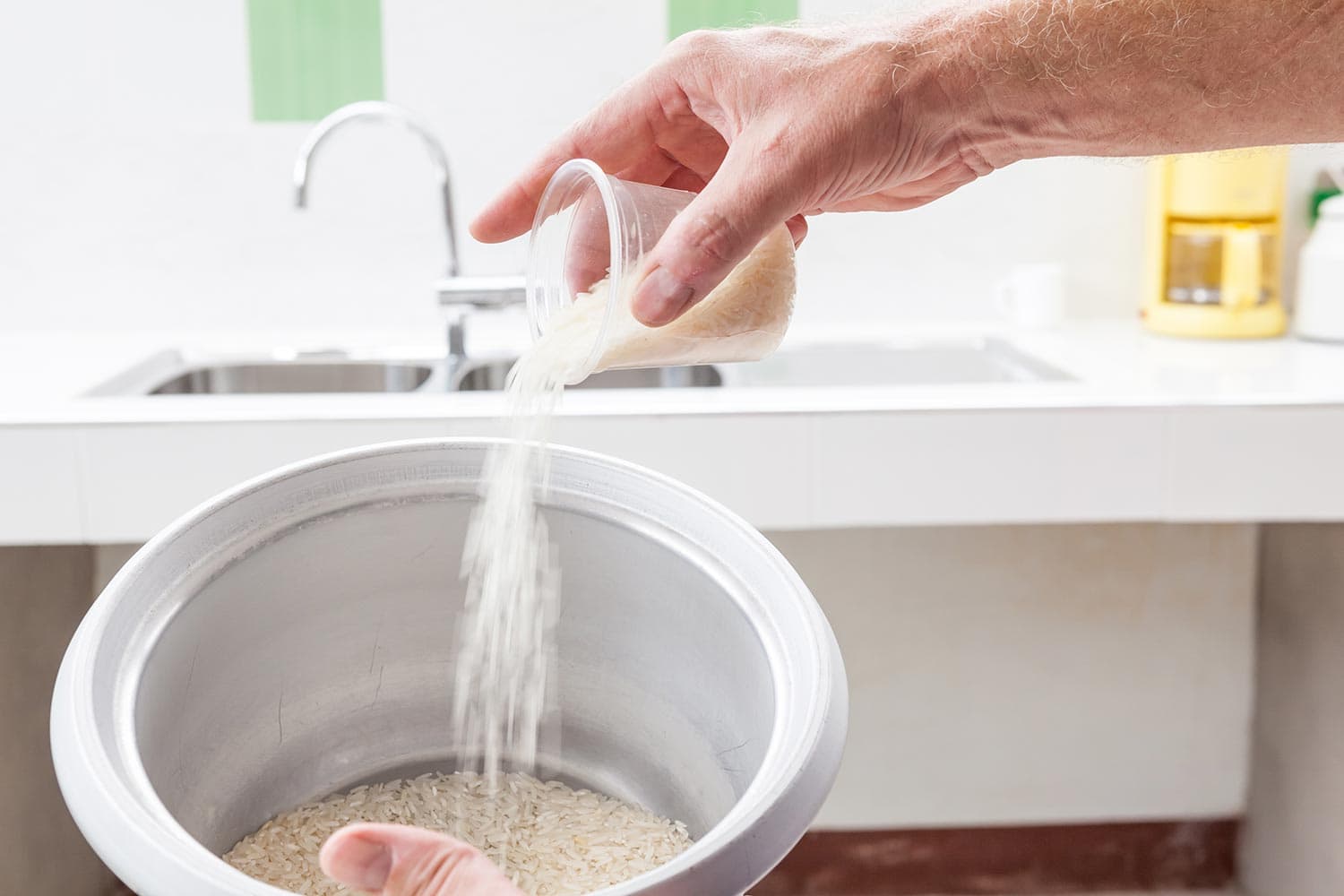 Let's look at each step in more detail below: 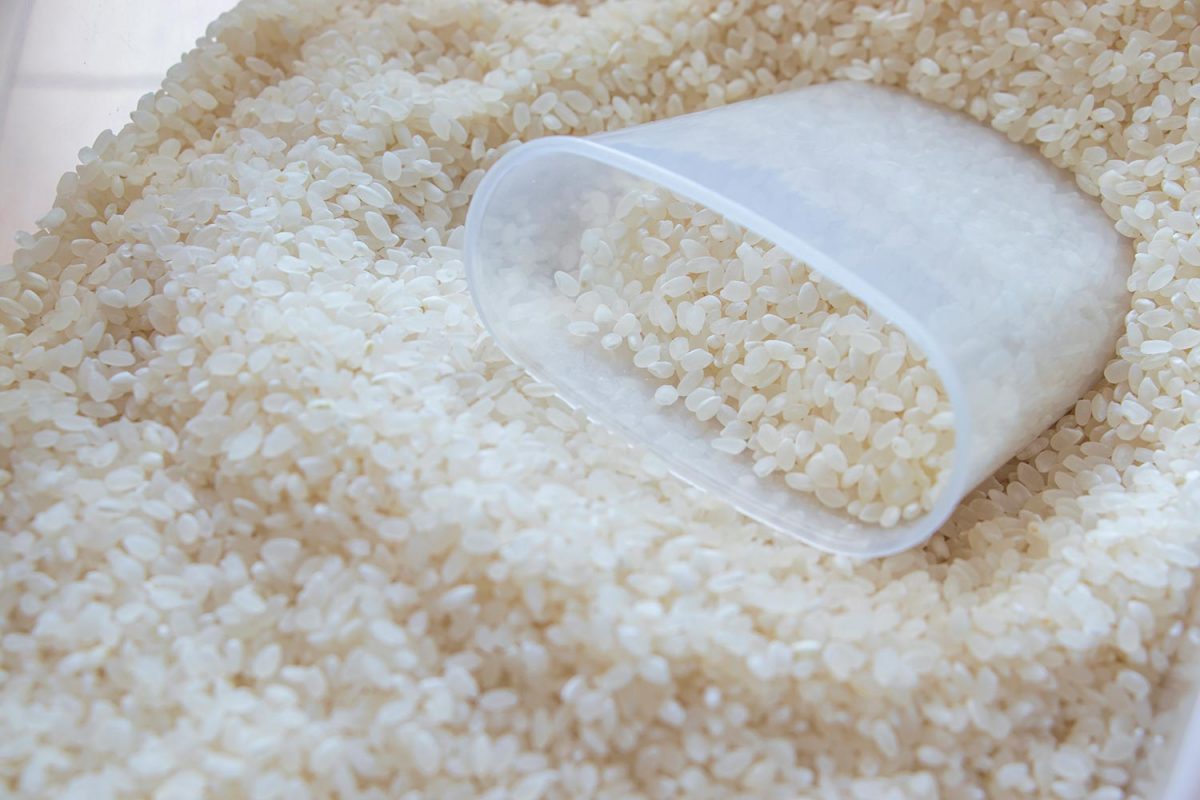 You can measure rice either by scooping it with the cup or pouring rice into the cup. A level cup of dry rice prepares one serving of cooked rice.

Larger rice cookers may require you to make more than one serving to operate.

After you have measured the rice, you'll want to wash it. Put the measured rice into the rice cooker bowl and add cool water. Give the rice a gentle swirl with your hand, and then drain the water, then repeat until the water runs clear.

For a more thorough rinse, follow the same steps above twice. After the second initial rinse, stir the rice with your fingers thoroughly around 30 times. Then pour on more water, stir the rice, and drain it.

Repeat this step twice for up to four cups and three times for more than four cups. You can see this process in the video below:

This removes some of the loose surface starch on the rice so it doesn't become overly sticky or gummy. It also allows the rice to absorb some water before cooking, which leads to a better, more even texture.

3. Add water to the rice cooker 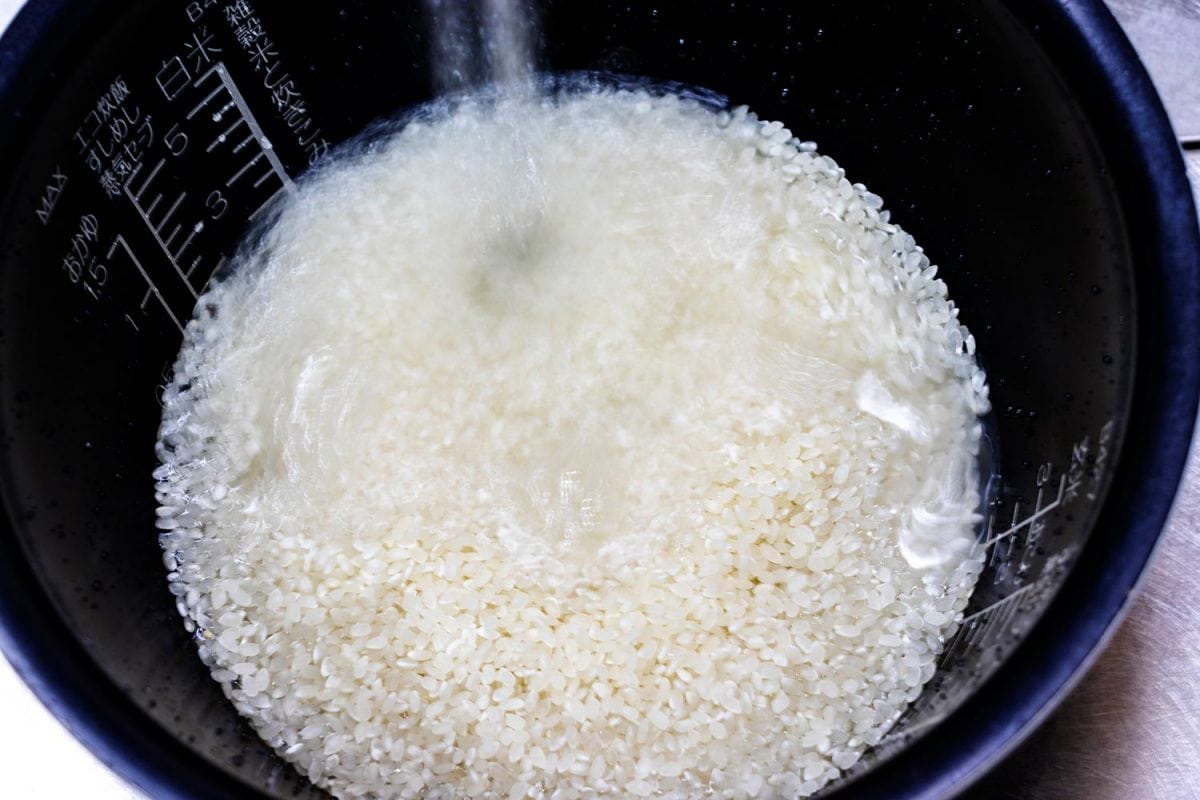 Make sure that the washed rice is already in the pot when you add the water. Otherwise, you will add too much water and may end up with soft or mushy rice.

Brown rice requires more water to cook than white rice. Some rice cookers will have a separate numbered line for brown rice or liter measurements. Follow the instructions in your owner's manual for best results.

You can learn more about cooking brown rice in a rice cooker here: Can Rice Cookers Cook Brown Rice? [And How To]

4. Turn on the rice cooker

Depending on the type of rice you are making, your rice cooker may have different settings. Some even have express settings that cook the rice more quickly.

Follow the instructions for your specific model and type of rice.

5. After cooking finishes, allow the rice to rest for 15 minutes

While it can be tempting to scoop up some rice and dig in as soon as the cooking phase finishes, you'll get better results by waiting for 15 more minutes.

During this wait, keep the lid on the rice cooker. The rice will continue to steam, becoming fluffier. This wait will also make the rice less likely to stick to the bottom of the rice cooker.

6. Fluff the rice, serve, and enjoy

After the rice has rested and steamed, fluff it with the paddle included with your rice cooker. Because most rice cookers have a nonstick coating, you should not fluff your rice with any metal utensils.

Now your rice is ready to enjoy!

How do I use a rice cooker without a measuring cup?

While you can get the best and most consistent results by measuring your rice with a measuring cup, it is possible to measure your rice and water without one. Whether you've lost your measuring cup or it's busy with another job, there are several alternatives you can consider.

To make white rice in a rice cooker, you'll want a 1:1 ratio of rice and water. As long as you stick to this ratio and don't add too much or too little to your rice cooker, you can really use any cup you have handy. Simply use the same cup to measure the rice and the water. 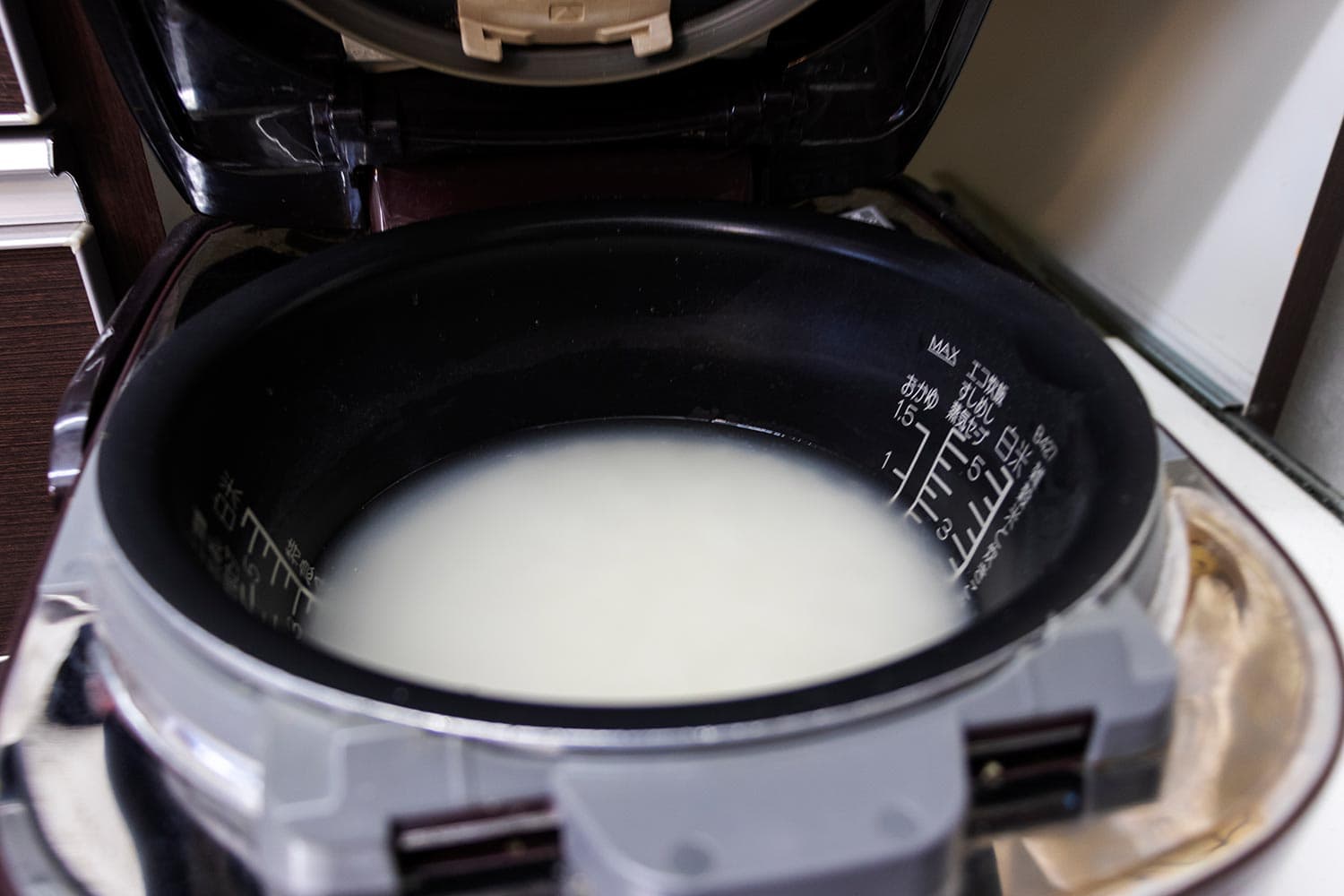 When making brown rice, you will want to use a 1:2 ratio of rice and water. This can also be done with any cup you have handy; just remember to double the amount of water.

Another common method to measure rice and water is to use the lines on your finger. Simply touch the bottom of the rice cooker basin with your index finger and fill it with rice until the rice reaches the first knuckle. Rinse the rice following the process described before, then fill the pot with water until the water reaches the second knuckle.

You can see this method of measuring rice in the video below:

This means that you can substitute your rice cooker cup with 3/4 cups of rice and still follow your machine's instructions.

Why is a rice cooker cup smaller than a measuring cup?

Given that cups are the standard measurement in American kitchens, you may wonder why rice cookers don't use them as the standard too. The reason has to do with the rice cooker's Japanese origins.

The first automatic electric rice cookers were produced in Japan in 1955 by the company Toshiba. By this time, metric units had largely become the standard in Japan. However, the traditional Japanese unit gō was considered the ideal amount of dried rice to prepare a single serving. So, the gō measuring cup became the industry standard.

The traditional gō is equivalent to 180.4 ml. However, with the conversion to metric units in Japan, the gō cups included with rice cookers are rounded off to 180 ml. These days, rice cookers are made in countries all over the world, but the 180-ml gō cup remains the industry standard.

Can I use a rice cooker measuring cup for baking?

Because rice cooker cups have a standard size, this means they could be used for measuring more than just rice. Any time you need 3/4 cups or 180 ml of an ingredient, you could measure it using your rice cooker cup.

This also applies when it comes to baking. However, baked goods often require a high degree of precision for perfect results. For this reason, many baking recipes call for weight instead of volume measurements. You'll be better off relying on your kitchen scale instead of your rice cooker cup for most baking recipes.

Using weight measurements when baking is a good idea even for some ingredients you might not expect, like eggs. Learn more about this topic here: Should You Weigh Eggs When Baking?

You've also learned that the rice cooker cup's diminutive size comes from traditional Japanese measures, not a diabolical conspiracy of the rice cooker lobby to trick unwitting consumers. We've also seen that you don't need a measuring cup to make perfect rice in a rice cooker, just a few tricks to get your ratios right.

Whether you're serving it on the side of a savory stir-fry or flavorful curry, you'll be ready to whip up your next batch of perfect, fluffy rice with your rice cooker. Happy cooking and bon appétit!

How Strong Is Keurig Coffee?

How To Arrange Appliances On A Kitchen Counter

Can An Air Fryer Basket Go In The Dishwasher?