Getting to know how the small appliances in your kitchen work can be confusing sometimes. Have you started to notice your rice cooker bubble while it's on and don't know what's causing it? Well, we've done plenty of digging and have all of the answers waiting here for you. Let's get right into it.

The main reason a rice cooker bubbles is that the rice inside has too much starch. Typically, the boiling water inside a rice cooker will mix with the starches present and create a foaming/bubbling sensation. This can result in overflowing or super mushy rice, so it's a good idea to rinse your rice off before cooking.

As we begin, we will cover all things rice cookers and discuss how to keep yours from bubbling. Whether you're new to using this tiny appliance or need some help with your rice recipe, we're here to offer some assistance. With that said, let's dive into this topic! 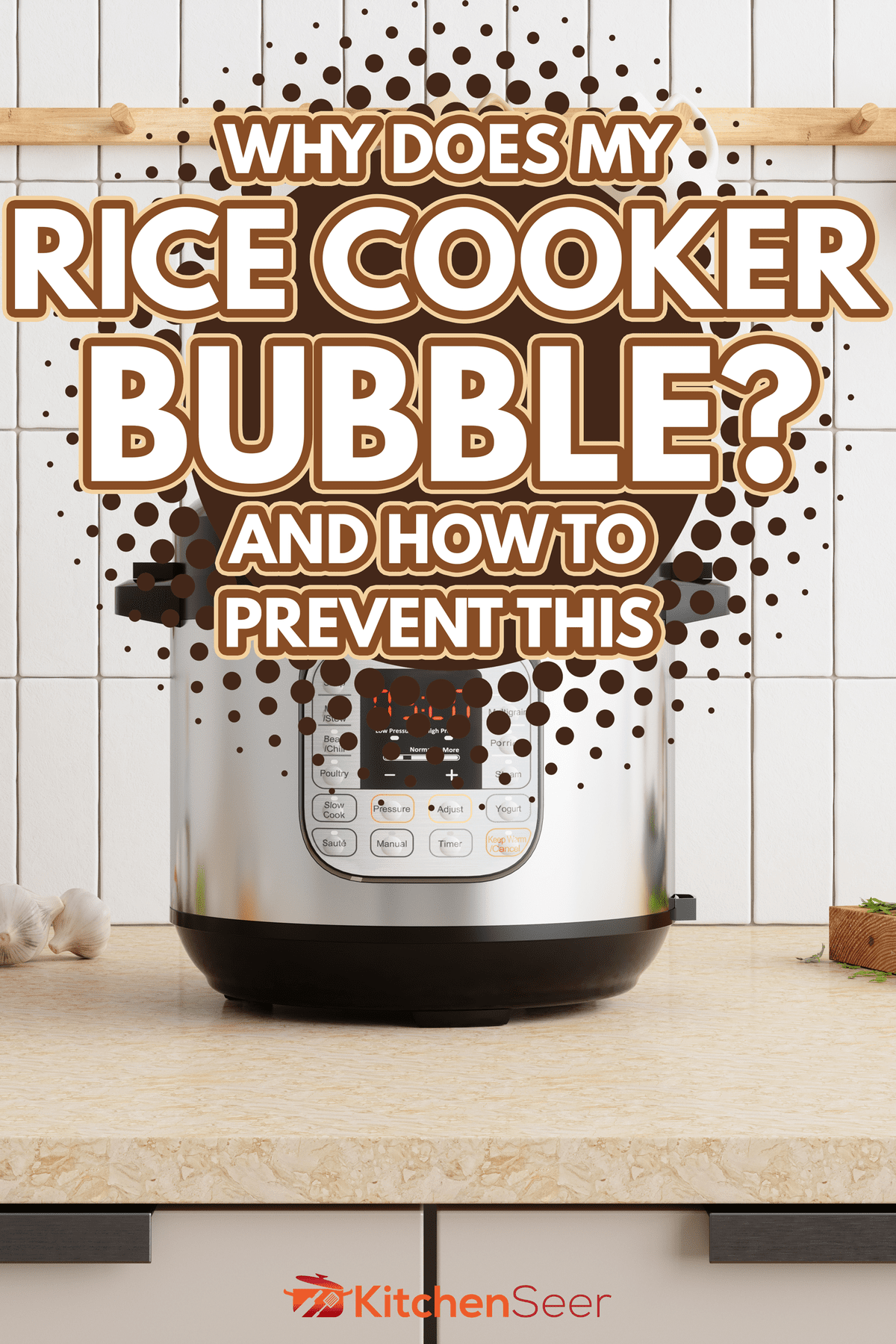 Why Does My Rice Keep Bubbling? 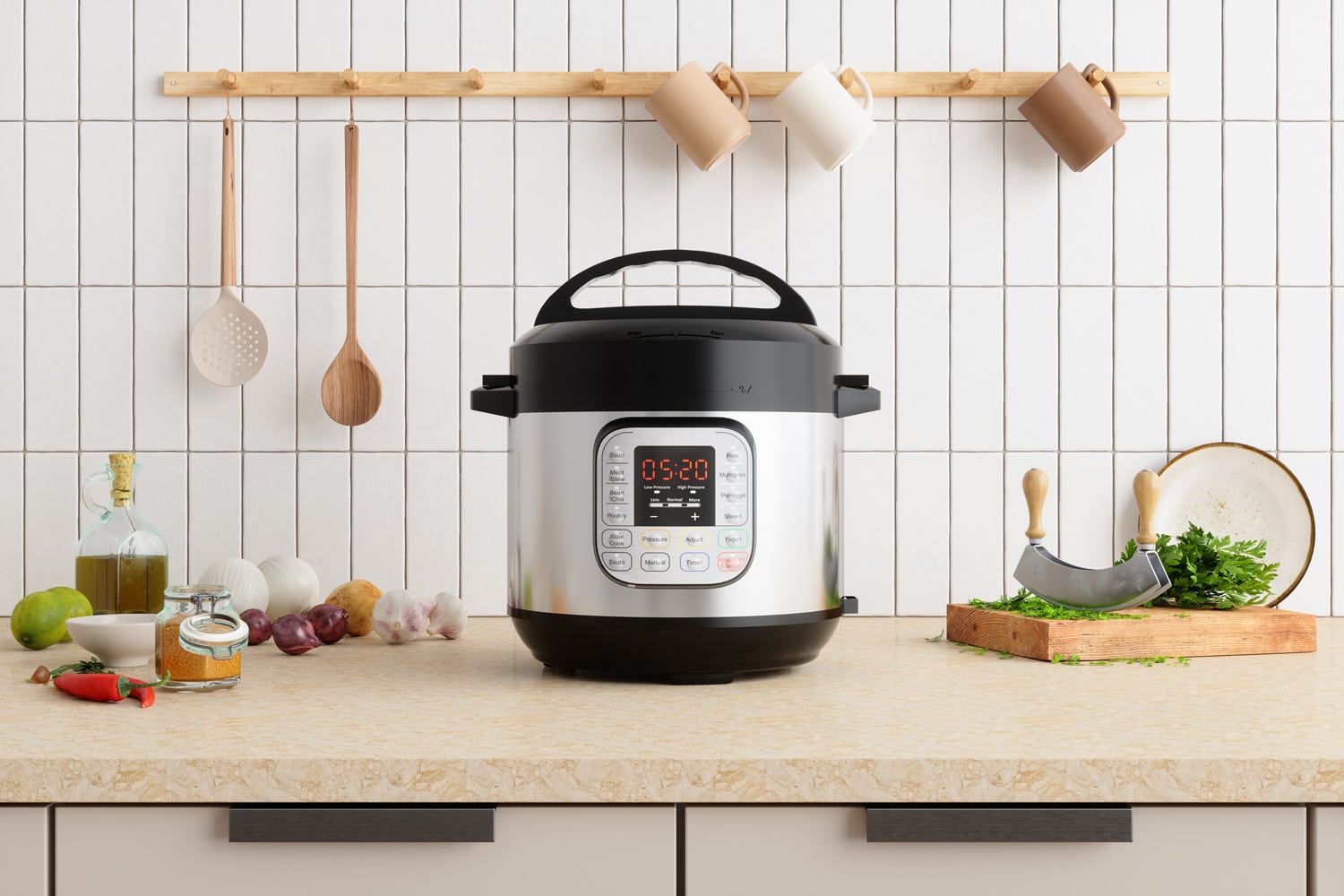 If your rice keeps bubbling, chances are it has too much residual starch. Starchy rice will often create bubbles inside your rice cooker during the cooking cycle, often pouring out the top of your appliance.

Like we said above, a good way to keep your rice from creating bubbles is to rinse it off before cooking. Doing this can help eliminate some of that extra starch still on your rice, ultimately making it taste better and create less of a mess.

That said, it is normal for a bit of bubbling/foam to develop while your rice cooks in a rice cooker, so don't be alarmed if you see this even after rinsing.

How Do You Keep Rice From Foaming?

To stop your rice from foaming, you want to soak it in water before cooking. You can do this by placing your rice into a bowl of cold water and letting it swish around.

This will typically take a few water changes. Ideally, you want the water your rice is in to be clear by the time you place it into your rice cooker.

The reason for this is that murky water essentially means there is still too much starch on your rice, so don't be afraid to repeat this soaking process a few times.

Making sure to rinse or soak your rice before cooking it can save you from a mushy meal or, even worse, a mess on your counters, so we recommend it.

Why Does My Rice Boil Over?

For those struggling with rice boiling over in their rice cooker, you could be overfilling your device. Typically, rice will expand as it cooks, so if you have too much in your cooker, this could lead to overflowing.

Furthermore, you could have too much liquid inside your rice cooker, so it's a good idea to follow the directions that come with your appliance.

However, you don't want to underfill your rice cooker either, as this can result in burnt rice, so you need to find a happy medium.

What Do You Do When Your Rice Cooker Boils Over?

The first thing to do when a rice cooker boils over is to reduce the amount of water you're using. As we said above, overfilling a rice cooker will almost always boil over.

This can be problematic because you can lose the much-needed liquid your rice needs to cook properly. Another way to stop boiling over is by rinsing your rice before cooking to remove excess starch.

Additionally, you can try adding a tablespoon of olive oil, coconut oil, or butter to your rice as it cooks, which will also help prevent your device from boiling over.

Can I Open My Rice Cooker While Cooking? 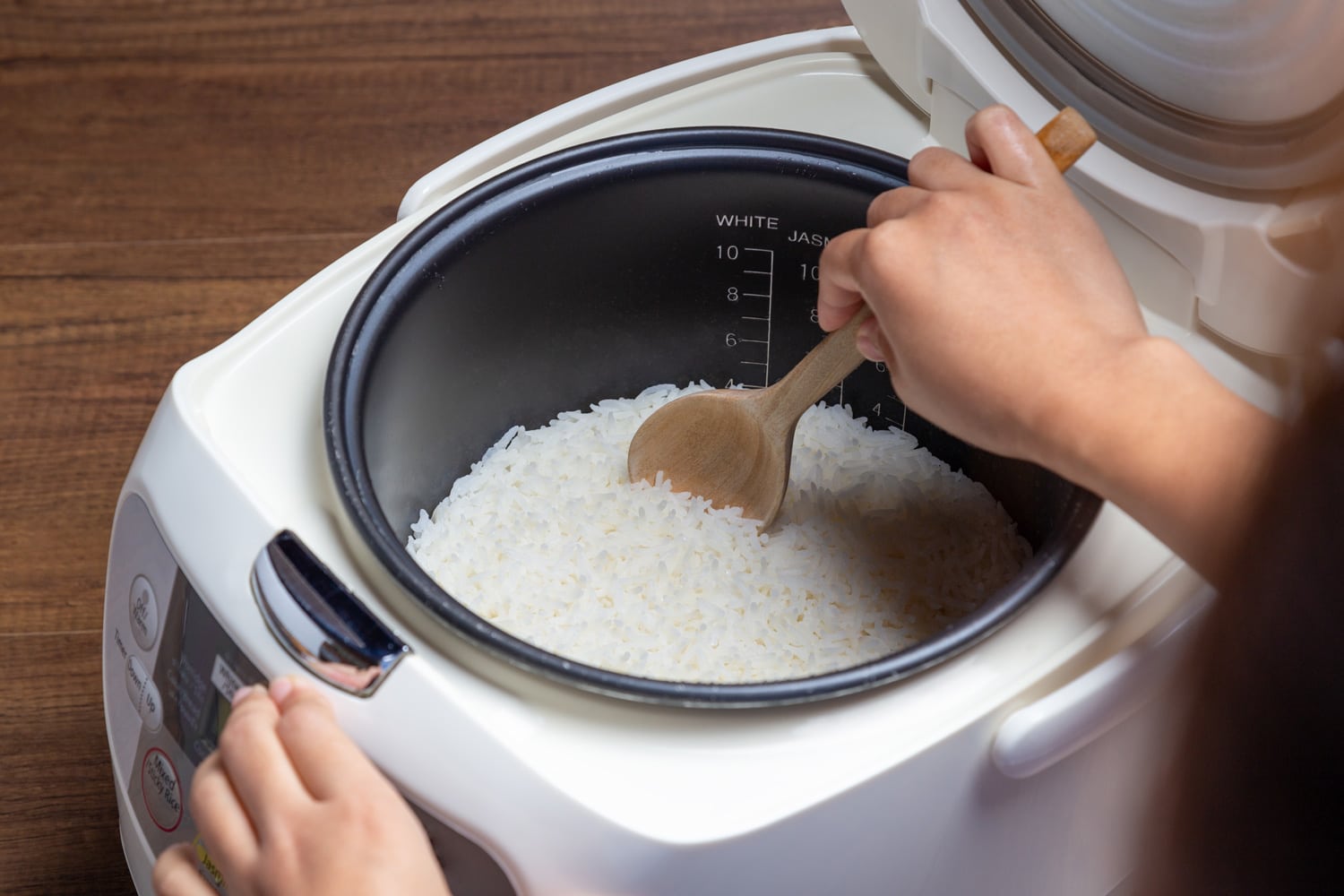 In general, you don't want to open a rice cooker while it's on. Considering how hot the water and rice will be inside, opening the lid to your system can seriously injure you.

On top of that, most modern rice cookers will automatically lock during the cooking cycle, preventing you from opening them at all.

For those with older appliances, we recommend waiting at least 5-10 minutes post-cook to open the lid to your rice cooker to ensure you don't become burned.

Again, it's better to wait until after the cooking cycle to test your rice rather than try and do so before it's done.

Does Lifting The Lid Ruin Rice?

Although lifting the lid to rice won't "ruin" it, doing so isn't recommended. Besides being dangerous, many chefs recommend against lifting the lid on your rice while it's cooking, as this can affect its taste.

According to Dickson Data, lifting the rice cooker's lid during the cooking cycle can cause the rice inside to lose temperature and flavor.

They also performed various tests on rice and found that the meals opened before they were ready were poorer in consistency than those who cooked fully before being checked, so that's something to think about.

Again, that's not to say taking a peek at your rice will necessarily ruin it, but we don't think it's a good idea.

Why Is My Rice Cooker Popping?

This generally isn't a good thing if you start to hear popping sounds while using a rice cooker. Most times, popping sounds mean the bottom of your appliance is wet, which can become dangerous.

Considering that rice cookers are electric, any water outside/below your device can result in severe damage.

To prevent popping, make sure to wipe down the bottom and sides of your rice cooker so everything is clean and dry before use.

Can A Rice Cooker Explode?

Yes, it's certainly possible a rice cooker will explode. Although this isn't super common, misusing a rice cooker can result in serious electric damage or, in the worst case, an explosion.

As we said, cleaning and drying a rice cooking system before turning it on is a good way to ensure your meal is made safely.

Additionally, making sure your rice cooker is in good condition and doesn't show any signs of defect can also prevent an explosion from happening.

Unfortunately, if a rice cooker is defective, the pressure inside can become too much to withstand, so an explosion is sometimes unpreventable.

Should A Rice Cooker Make Noise? 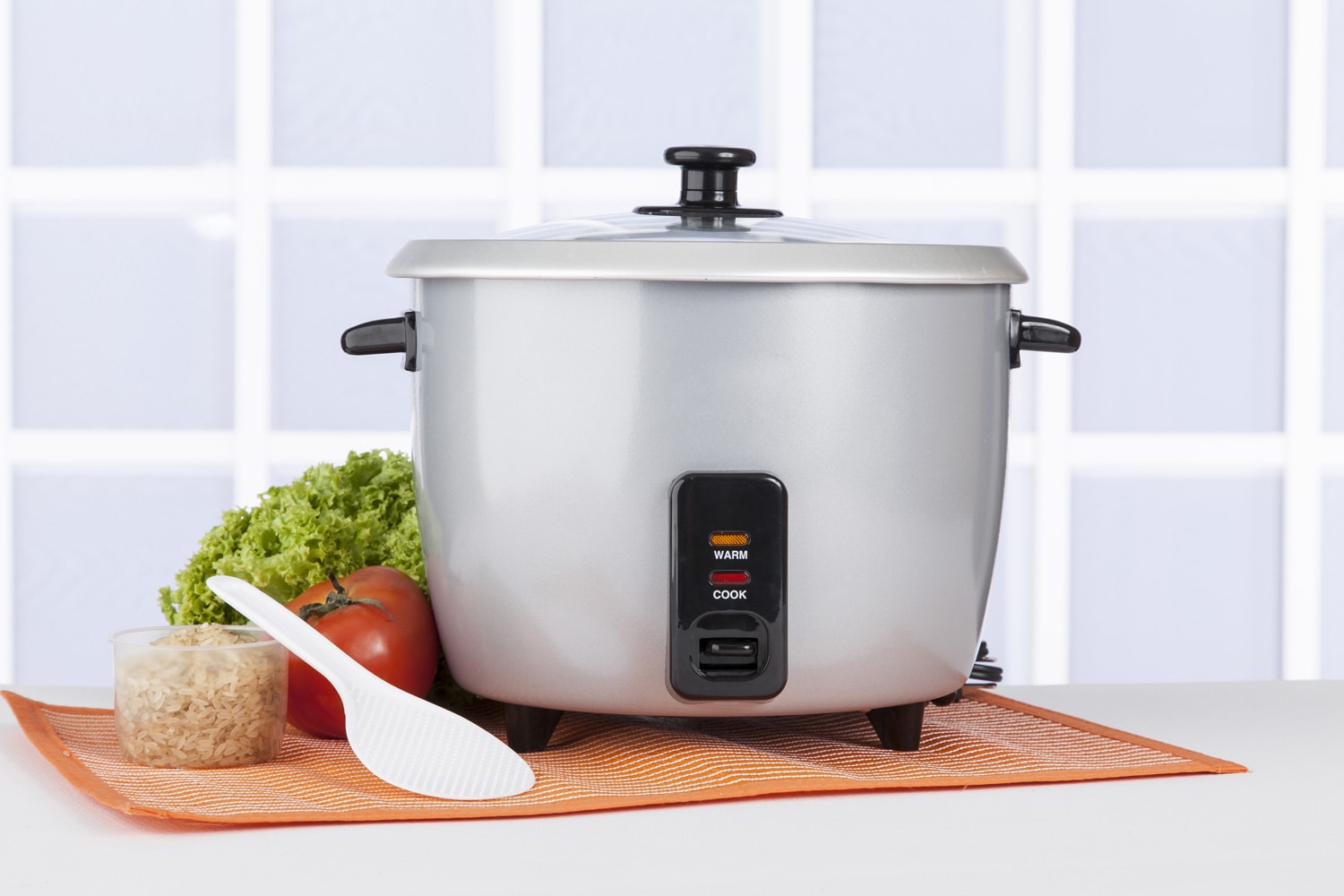 It is normal to hear a soft bubbling/boiling sound when using a rice cooker. Since your appliance reaches extreme temperatures, hearing some noise is completely fine.

However, you shouldn't hear popping, whistling, or other unusual sounds while your rice cooker is on. These noises can indicate something is wrong with your system and could be a warning sign that an explosion is coming.

Another sound to be wary of is clicking. This could mean your rice cooker is having trouble turning off/adjusting its temperature, so make sure to be alert while using your appliance.

Will A Rice Cooker Beep When It's Done?

Yes, many newer rice cookers will beep when they finish making your rice. Having this feature is pretty standard, regardless of brand, so chances are, your rice cooker will beep.

For example, a rice cooker from Aroma Housewares will beep continuously for 5-6 seconds after it is done cooking your food, so you will be alerted.

It's also very common to have a rice cooker beep if it needs more water or something isn't sealed correctly, so this can also be in the form of a safety feature.

How Do I Know My Rice Cooker Is Working?

Typically, a rice cooker will work if it is on, properly filled, and plugged into a functioning outlet. Furthermore, your appliance will likely have a light that means it is ready to make rice, so keep an eye out for a flashing icon or symbol.

Then, plug it in, turn it on, and find a cooking preset you want to use. This should bring the water inside to a boil, and if your system doesn't, you now know there's a problem.

In this case, we recommend reaching out to the manufacturer directly to get replacement parts/repairs. 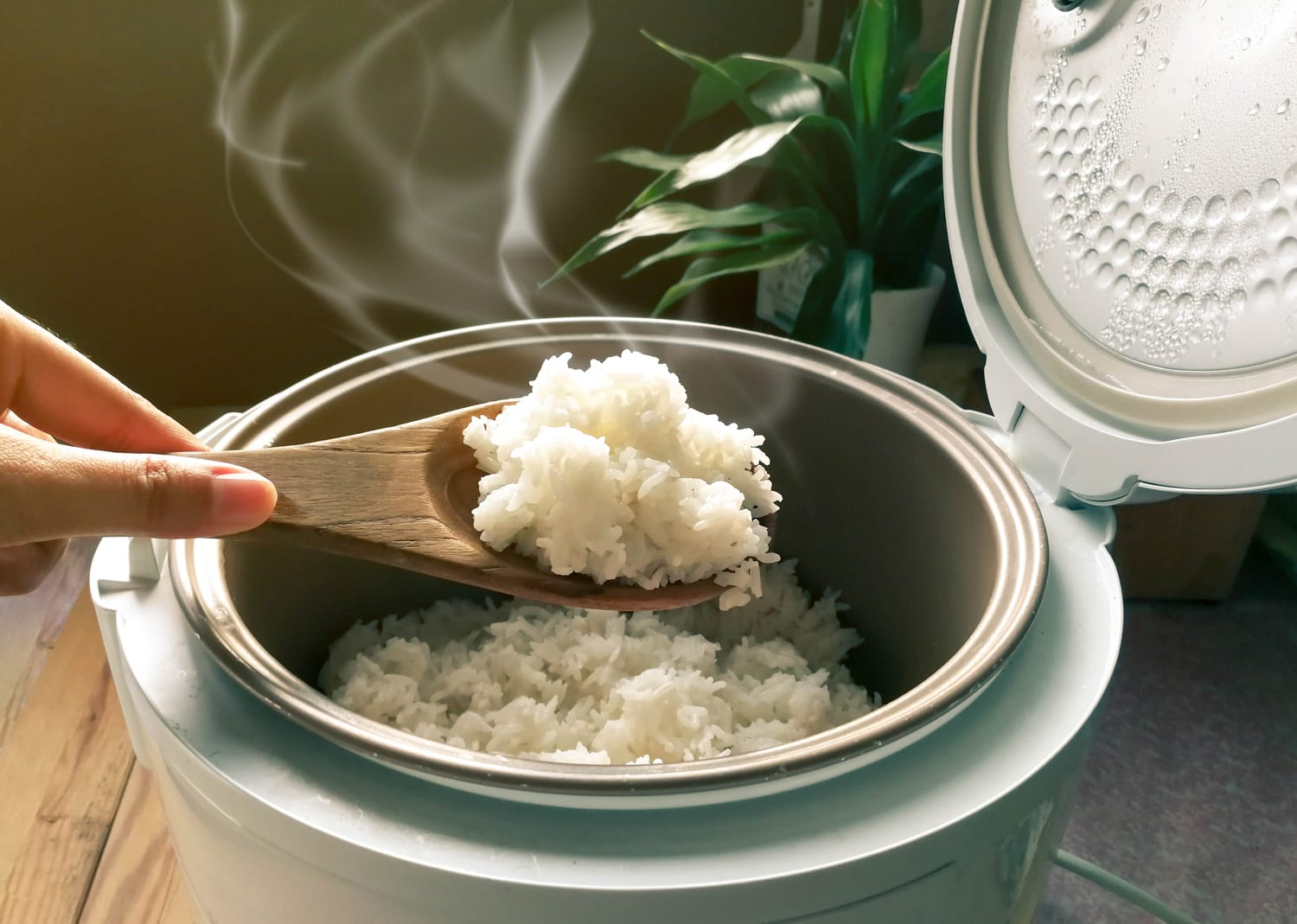 In general, rice cookers won't be quite as fast as the stove. According to the New York Times, stovetop cooking white rice typically takes around 18 minutes, while using a rice cooker will be more like 30.

They also claim that a rice cooker is rarely as fast/faster than traditional stovetop cooking. That said, the benefit of using a rice cooker is that your food will typically have more time to cook, resulting in a more flavorful meal.

Rice cookers are also a great alternative for those traveling or somewhere without stovetop access, so they're sometimes worth the wait.

Whether you love cooking rice or want to start, knowing how to use a rice cooker is essential. From what we found, a rice cooker bubbles if too much starch is present.

An easy way to fix this is to rinse or soak your rice in water before cooking. We recommend grabbing a bowl of water and letting your rice swish around. You will likely need to refill your bowl a few times until the water is clear.

Regardless, make sure to keep an eye on your rice while cooking, and don't forget to follow your appliance's instructions for food-liquid measurements.

Should You Rinse Rice Before Using The Rice Cooker?

Pressure Cooker Vs. Rice Cooker: Which To Choose?

Why Does My Rice Cooker Make Mushy Rice?

Can You Microwave Ziploc Bags?

How Many Watts Do You Need For A Good Blender?

Food Processor Blade Not Spinning – What To Do?