Yukon Gold potatoes are one of the most popular potatoes to consume. It's an all-purpose potato that works well for roasting, mashing, soups, and baked dishes. If it's your first time working with one, you might be wondering if you should peel it. Or, can you leave it on? Let's find out!

When you think of potatoes, you picture something that comes from the ground. Therefore, you might get grossed out thinking about eating the skin. But, is there any genuine concern about eating it? How can you tell if you need to peel it? We cover these issues and much more further ahead. 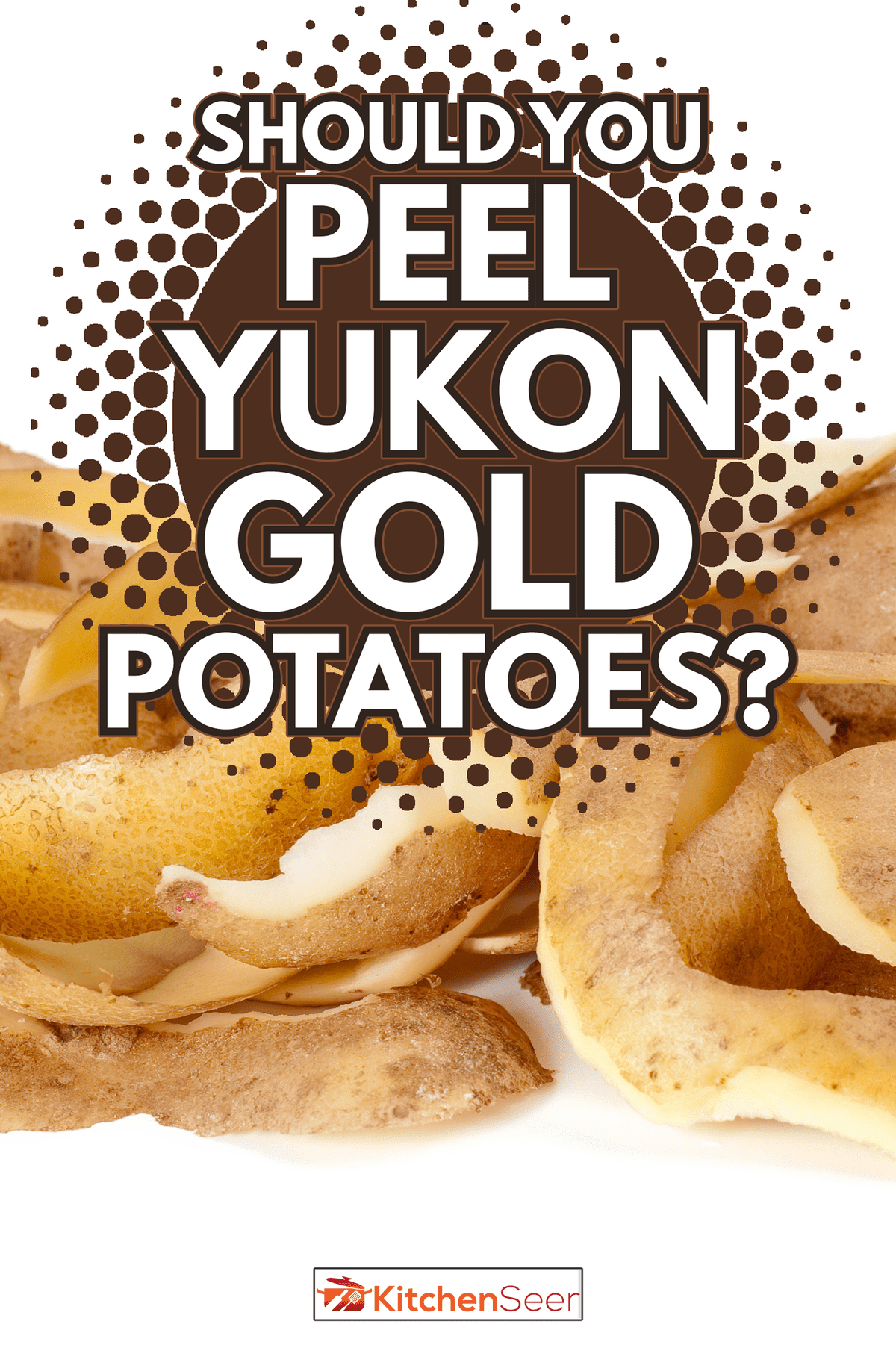 Whether Or Not To Peel A Potato 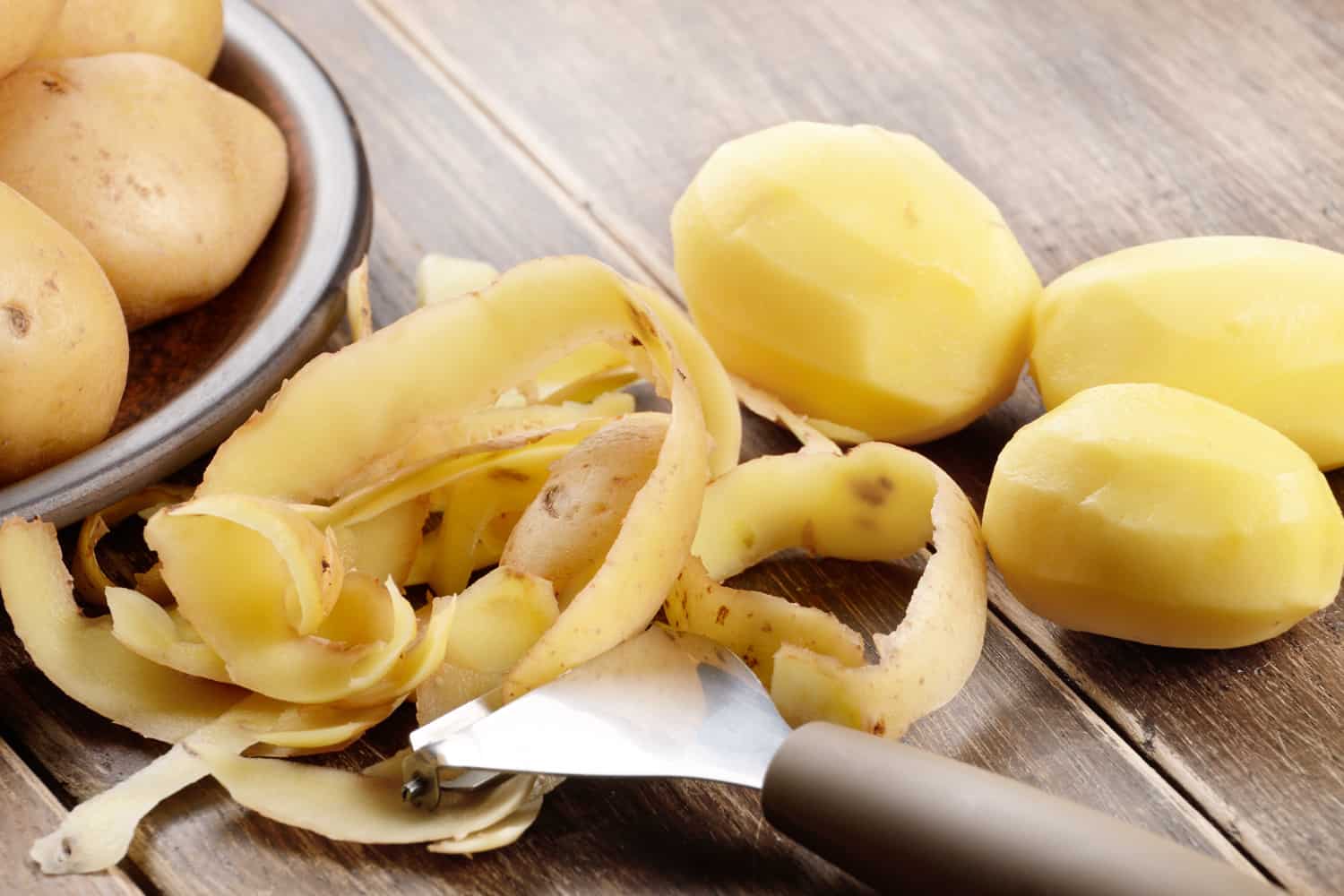 What is there not to love about potatoes? You can include it in many dishes. And, they rarely disappoint.

However, the area where most people don't pay attention is the prep work. More specifically, the need to peel or not to peel the potato. There are a few concerns you may have.

First, is the skin dirty? There's dirt, but there are also pesticides that you have to worry about. If pesticides are your primary concern, the best way to avoid consuming too much of them is to buy organic.

Do You Need To Clean A Potato?

Regarding dirt, it's easy to get rid of as much of it as possible. All you need to do is rinse the potatoes under cold water. If you want to be more thorough, you may also scrub it with a brush.

So, cleaning and drying with a towel will do just the trick. You should also carefully inspect the skin. You don't have to remove the potato eyes. If there's a red or pink coloration near some of them, that's normal and should be safe to consume.

Lastly, be sure to cut off any mold present on the skin. If you allow it to be on the skin, it can mess with the overall flavor of the potato. From here, it's all up to you to peel or leave it.

What Happens If You Leave The Skin On A Potato?

Now, we should know how to avoid the dirty side of the potato. Buy organic to avoid pesticides and rinse it under water to remove lingering dirt. The issue that follows is the result you get after cooking.

A few things that come to mind are the texture, the flavor, and the visual appeal. Regarding appearance, the sides will have a rustic look. It will not only be the yellow color you're familiar with.

The skin will brown a lot more. When you use them for dishes like scalloped, roasted, or mashed potatoes, they will have a crunchy texture when you bite down. If you decide you want to use the Yukon Gold for soup or stew, it will give them a much heartier texture.

Yukon Golds also tend to be more flavorful when you leave the skin. Though, sometimes it makes more sense to peel it. For example, think about mashed potatoes. Most people would want it to be creamy.

If you leave the skin, the dish won't be creamy enough. In general, it depends on the texture you want to achieve. Aside from that, leaving the skin will usually save you a bit of time from prep work.

What Is Potato Skin Good For? 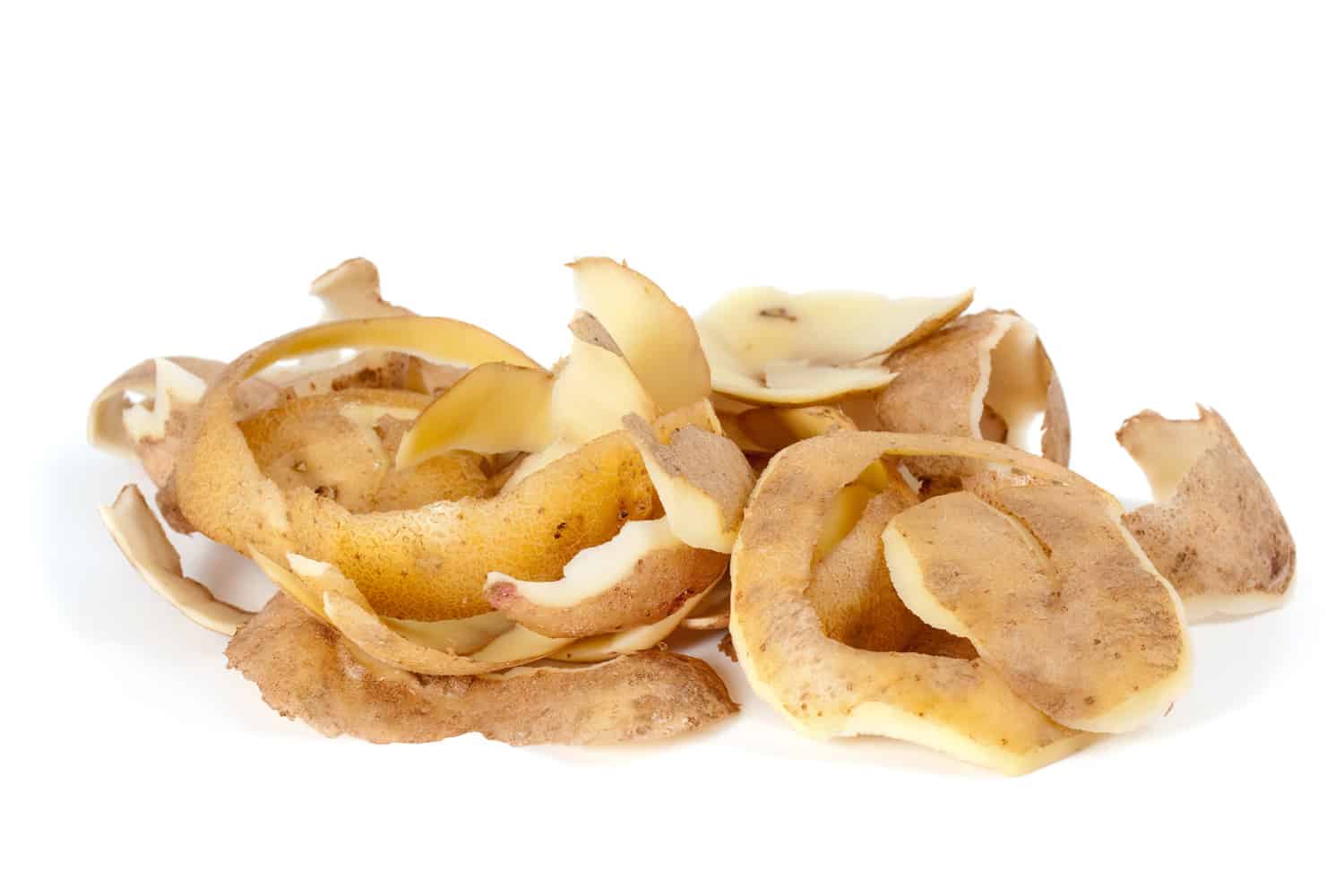 Potato skins play a bigger role than flavor and texture. While they might not look appealing from the get-go, they hold most of the potato's nutritional content. Eating the skin will give you more fiber, vitamins, and minerals.

A potato with the skin contains 161 calories, 36 grams of carbohydrates, 4.3 grams of protein, and 3.8 grams of fiber. It also contains up to 28% of the daily recommended intake of micronutrients like vitamin C, B6, potassium, manganese, etc.

Using The Potato Skin For A Separate Dish 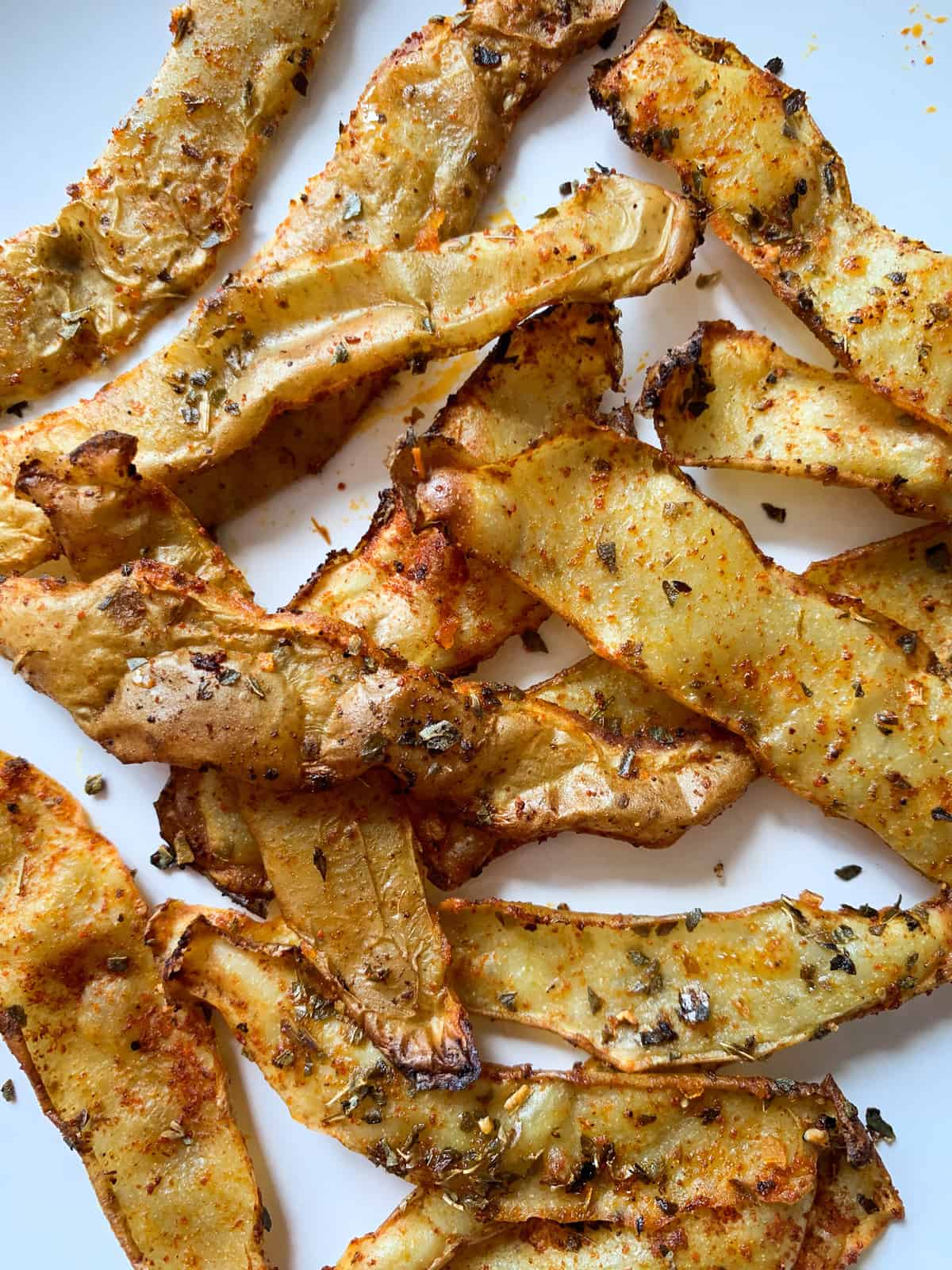 It might surprise you to find out, but many people love the flavor of the potato skin. They enjoy it so much that they save the skin to make a meal with them later. Potato skins develop a crunchy texture when you bake them.

So, you're preparing a healthier version of chips. That's without mentioning that you're reducing the waste. Why throw them out when you can cook and enjoy them as a snack?

Still, it will typically depend on the potato. For example, Yukon Gold and red potatoes will have thin skins. In this case, it doesn't matter if you leave the skin or peel it.

On the other hand, russet potatoes will typically have thick and tough skin. Therefore, there's more incentive to peel it. Nevertheless, you may also leave the skin if you plan to cook them for longer. This way, they're less chewy and more crunchy.

Can You Eat Potato Skins?

As mentioned, it is possible to eat the skin of a potato. It holds most of the nutritional content. In addition, some people even like to make recipes out of it.

However, there are a few situations where you might not want to eat it. The skin is where you'll typically notice when the potato is going bad. Do you see any green blemishes? Perhaps it has a lot of bruises? It doesn't stop there.

Sometimes the potato will develop black spots. The strength of the skin is also an indicator. If it's not firm, you should probably avoid eating the skin or the potato.

If you somehow avoid all the warning signs, consuming spoiled potato skin can give you foodborne illnesses. Symptoms of food poisoning include:

You can do your best to avoid this by removing the green spots if they're small. However, if a large part of the potato is green, it's best to throw it away.

Do You Need To Peel A Potato?

As far as cooking goes, removing the skin from a potato is entirely a preference. You can either love the flavor and texture it offers or not. In terms of safety, it's a different situation.

There are times when you must peel the potato. More specifically, green spots, black spots, or other signs of spoilage. However, there's another reason why some people feel better when they peel the skin.

Why Is It Important To Remove A Potato's Skin? 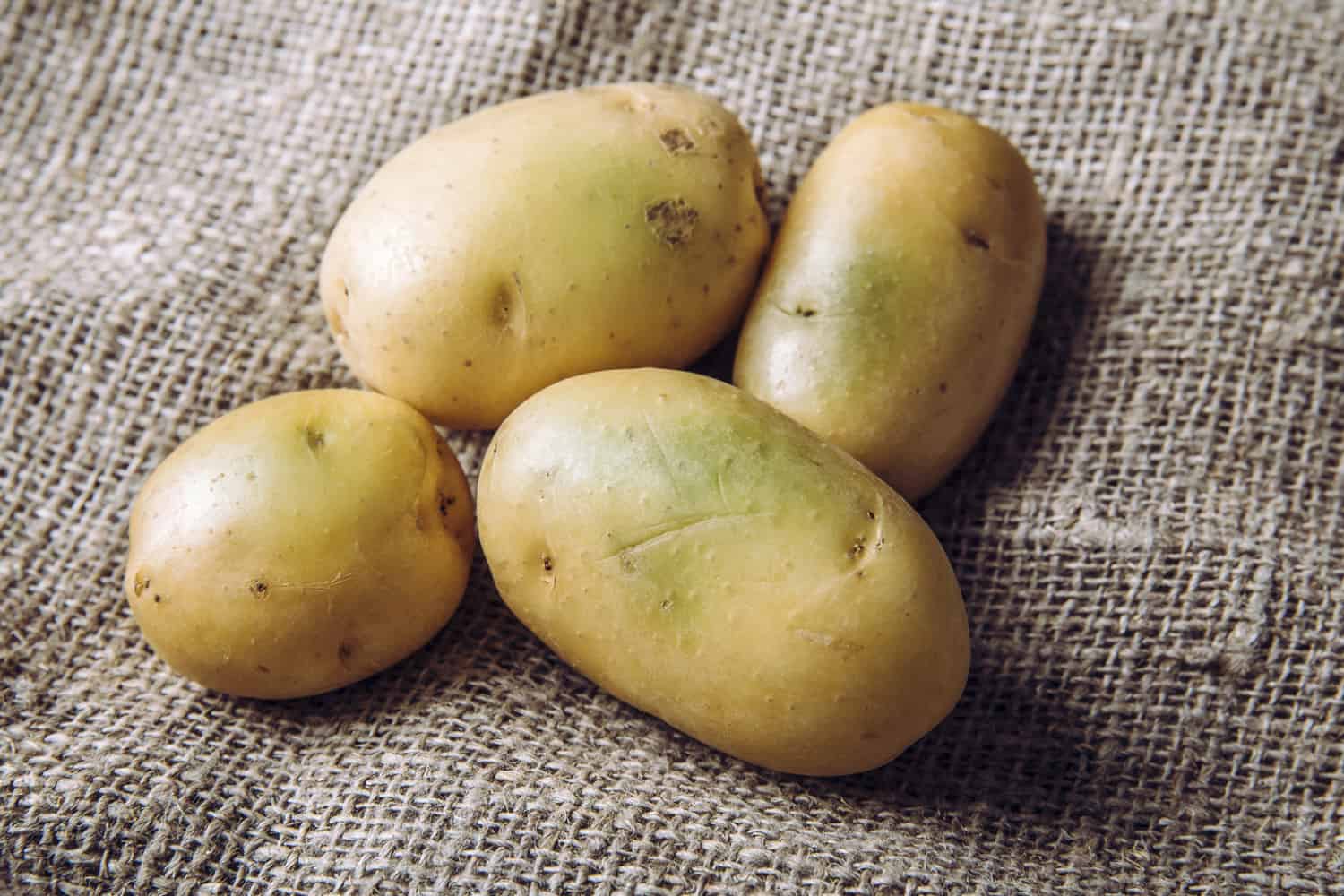 It has to relate to the toxin known as solanine. Chlorophyll is responsible for the green coloration of a potato. Where there's a presence of chlorophyll, there is also a high chance that there are concentrations of solanine.

The formation of this toxin is localized to the skin. It may also form in the eyes of the potato. Therefore, you're more at risk of food poisoning when you consume it.

Solanine poisoning cases are rare. But, careless storage of potatoes can promote the growth of it. For this reason, some people would make it a habit to peel the potato and remove the eyes before cooking it.

Again, there's a higher risk of solanine poisoning if you are careless with how you store the potatoes. Keep the potatoes away from light to avoid green pigmentation.

This way, you can enjoy the skin along with the flesh. Otherwise, there's no reason to risk it. Peel the potato or throw it away if it becomes green.

Can You Use Potato Skins In Your Garden?

We've covered why you should keep the skin and when you shouldn't. If you've decided to keep peeling the skin, there's no reason to throw it away. While you might not like it as food, there are plenty of ways to use it.

The potato peel is where you will get the most nutritional value. But, since you're not eating it, you can ensure something else gets it! More specifically, add them to compost piles. Plants will benefit from the added nutrients.

Though, you'll have to do some research beforehand. You wouldn't want to wipe out other crops in your garden by accidentally introducing a fungal infection known as potato blight.

When you're feeling a bit more adventurous, you could also try to make alcohol with the peels. Again, it's going to take a bit of research. But, if it works, you might save yourself the trouble of buying beer.

Pets could also benefit from potato peels. Though, it's mostly going to be the fuel for their food. More specifically, you can use the peels to feed a worm farm. So, if you own a leopard gecko or something similar, you can improve their meal selection.

Why buy your pet's food when you can grow it at home?

There are a lot of factors that come into play when you decide to do something with an ingredient. For Yukon Golds, there aren't too many reasons why you should remove the peel. Unless you're going for a creamy mashed potato recipe, you're mostly missing out!

Before you go, do you have other potato concerns? Are you debating whether to peel or leave the skin on a sweet potato?

Should You Peel Sweet Potatoes?

Is A Cheese Board A Starter Or Dessert?

What’s The Best Way To Store A Cut Onion?