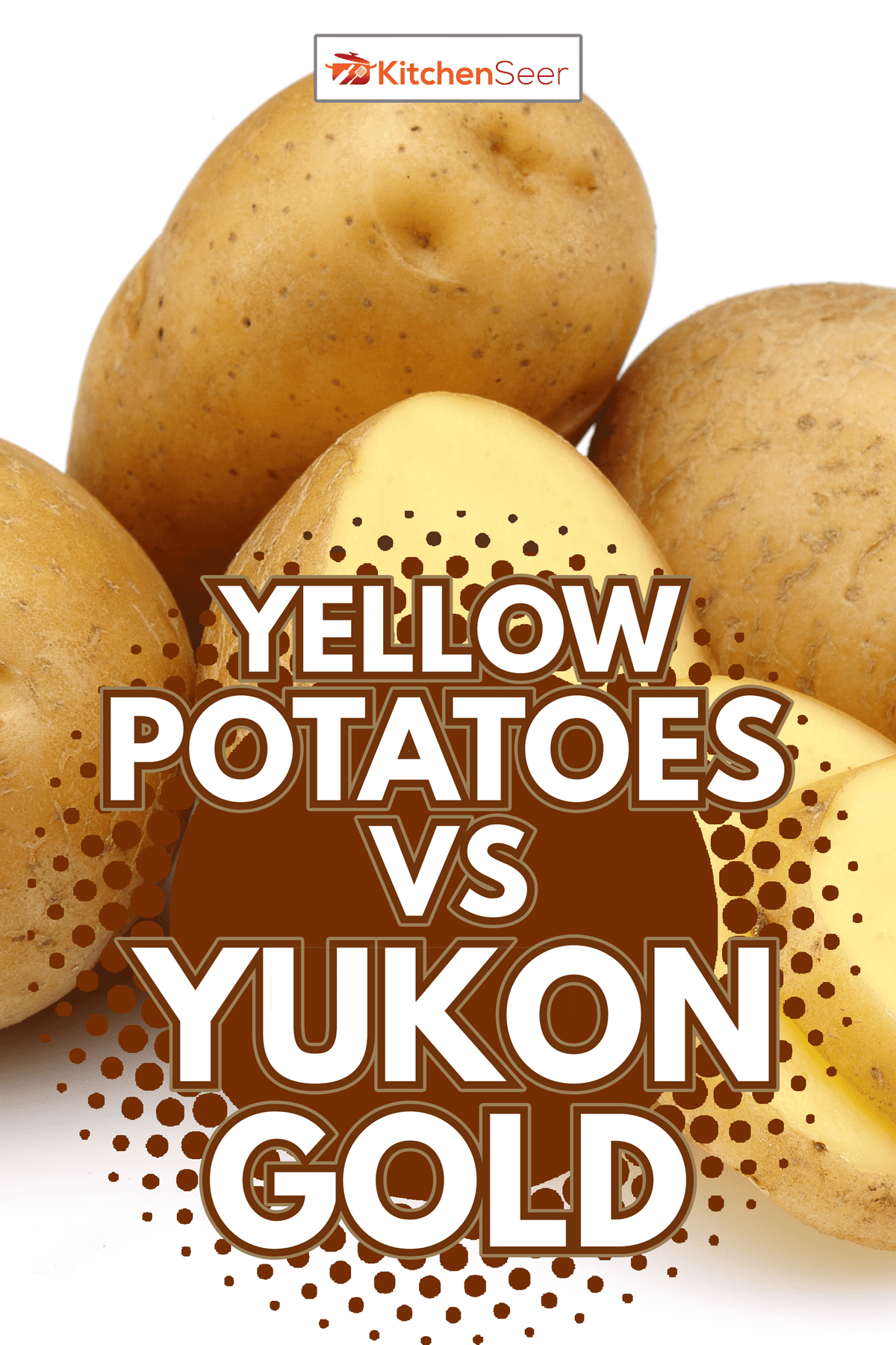 Did you know there are many different types of potatoes? It's essential to know the various kinds when you want to use them. Otherwise, the dish won't come out well. Are there any differences between a yellow potato and a Yukon Gold? If you want to go over the differences, let's take a look!

So, what's the difference between the categories of potatoes? What are the other potatoes besides yellow ones? Finally, what difference does it make in cooking? These are some of the topics we will cover. To learn more, keep reading ahead. 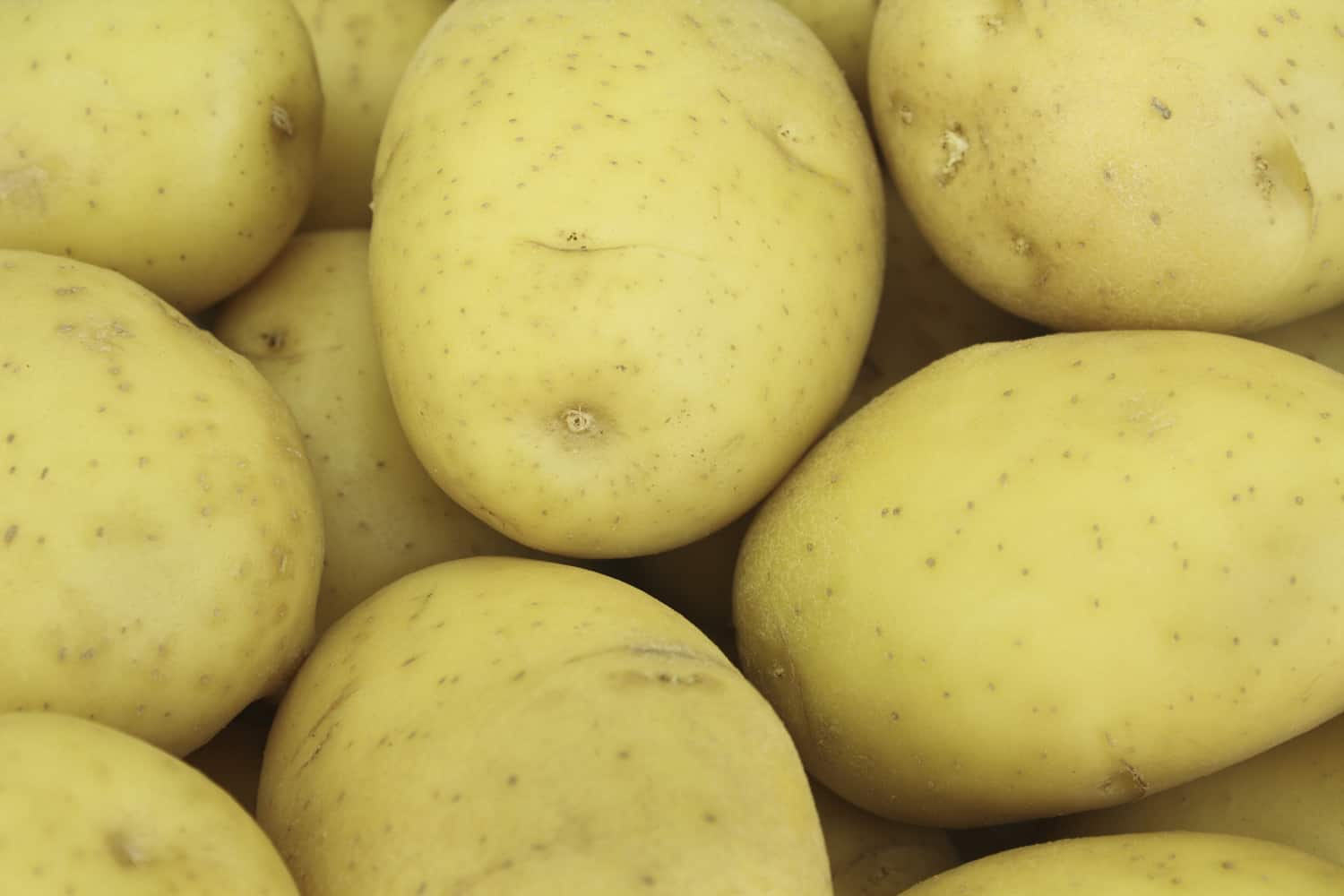 Now that you know Yukon Gold potatoes fall into the yellow potato category, what exactly does that mean? Does it only relate to the color of it and nothing else? Not exactly!

There's a reason why potatoes are in separate categories. It all depends on several factors. In general, you'll mostly be familiar with white potatoes.

The yellow variety is growing in popularity. Yellow potatoes are mostly known for their sweet and buttery flavor. The most popular of this variety is the Yukon Gold.

So, if you've ever bought a yellow potato at a store, it was most likely a Yukon Gold potato. However, there are several other kinds of yellow potatoes. These typically include:

What Makes A Yellow Potato Different From Others?

The parts that differentiate a yellow potato from the others are subtle but noticeable. In terms of shape, they are usually round to slightly oblong-shaped. Their skin will typically be a yellowish light brown.

However, the flesh will carry a buttery yellow to golden waxy look. In terms of starch content, yellow potatoes rank in the low to medium category. Most would usually describe the texture as moist, creamy, and succulent.

What Are Yellow Potatoes Good For? 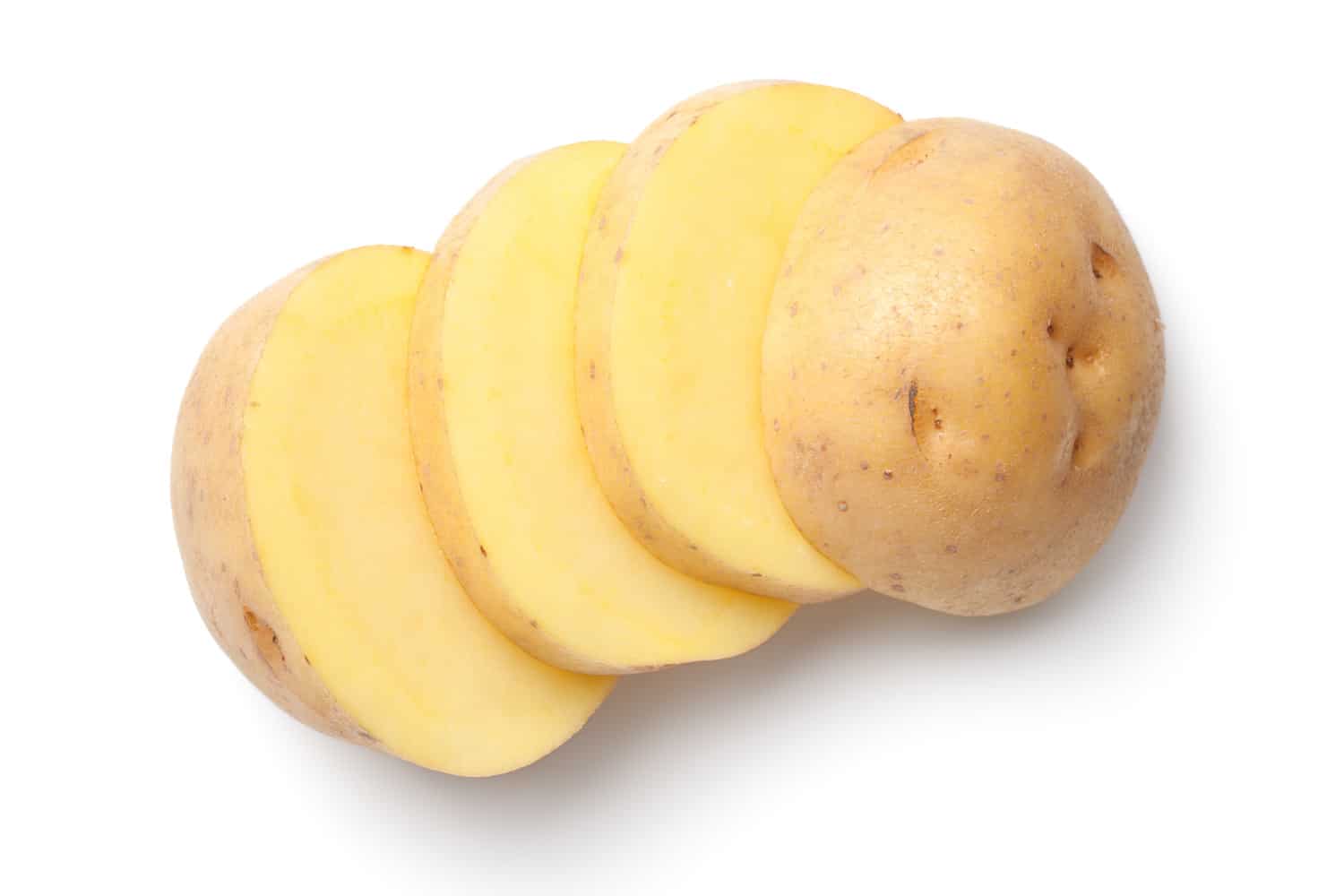 As we said, yellow potatoes are good for boiling, steaming, mashing, roasting, and grilling. One cooking method you don't see there is frying. Thus, it raises a couple of questions.

Why is the yellow potato best for those types of dishes? Additionally, would it be possible to use yellow potatoes like Yukon Golds for french fries? It's possible, but they aren't the best type of potato to use for it.

Starch content matters in cooking because of how they react to heat. Potatoes with high starch content have densely packed starch cells that swell and separate from one another as they cook.

As a result, you get a potato with a dry, fluffy texture. These are the type you'd want to use to make french fries. There are also low-starch potatoes that don't do well for fries.

The reason is that they hold more moisture and contain loosely packed starch cells. So, once you cook them, they don't separate from each other. Low-starch potatoes retain their shape much better.

It makes them better for salads and stews. Of course, there is going to be a middle ground. Yukon Golds and other yellow potatoes fall into this category. They're known as middle-starch potatoes.

Accordingly, this makes them an all-purpose variety. Since middle-starch potatoes hold a medium-starch content, they are suitable for various cooking techniques.

How Do You Know If Your Potato Has High Starch?

Generally, checking for the type of potato you have is simple. The only tool you'll need is a knife. Cut the potato in half and check for any residue left behind on the blade.

Starchy potatoes will leave behind a milky, starchy liquid on the knife. If the potato leaves nothing behind, it's most likely a low to middle-starch potato.

When Should You Use Yellow Potatoes Or All-Purpose Potatoes?

Although Yukon Golds fall in the all-purpose category, that doesn't mean they'll produce the same results as another kind of potato. You can use them for various cooking techniques. But, the results will vary.

If you fry a Yukon Gold potato, it won't produce the same fluffy texture as a starchy potato. If a recipe calls for a starchy or waxy potato, you should do your best to acquire one. Otherwise, the dish won't come out the same.

When you don't mind a difference in texture, you can use an all-purpose potato.

Which Potato Is The Healthiest? 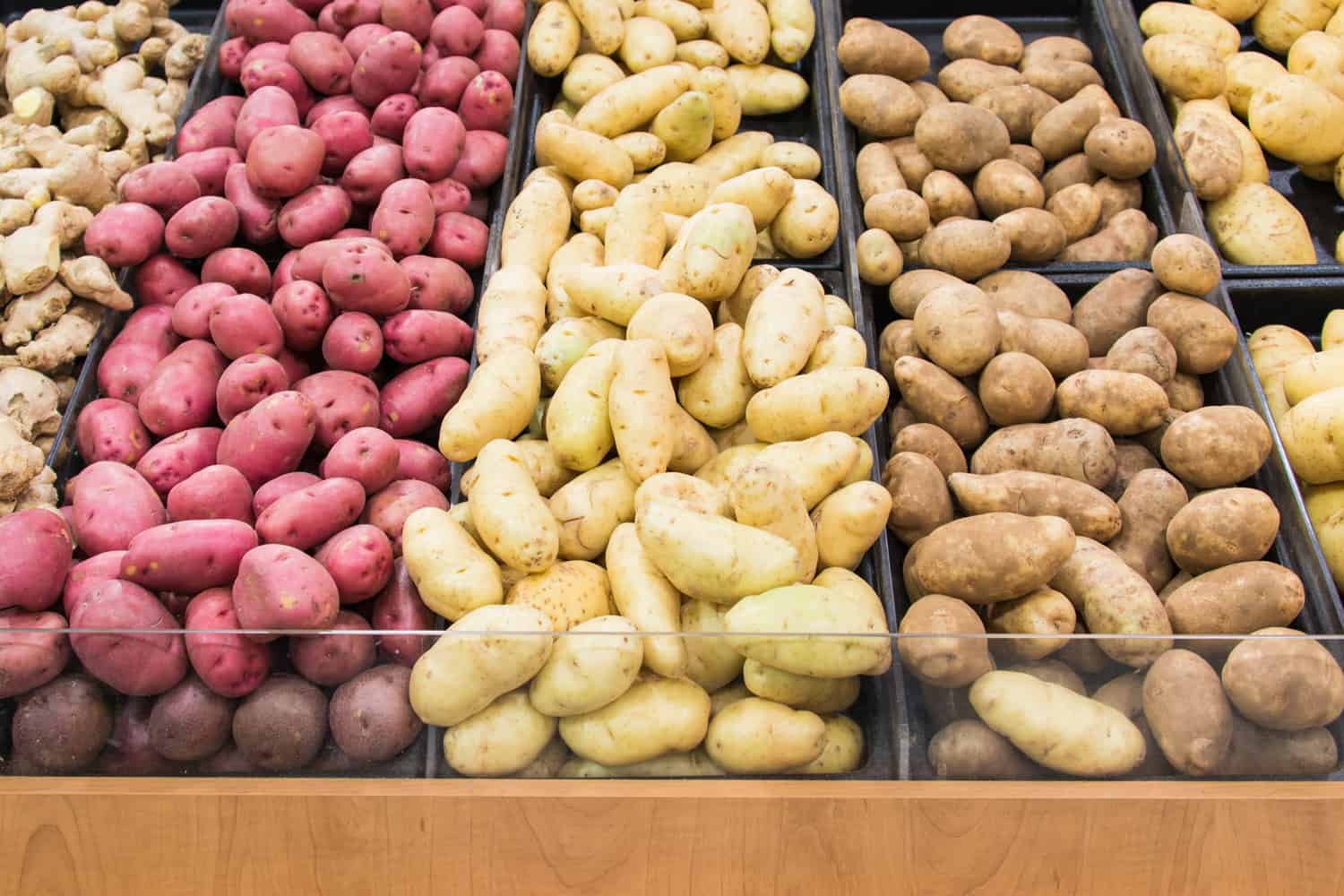 When you're picking ingredients, one of the factors you'll have to consider is nutritional value. Are all potatoes the same in this regard? If they aren't, which one is the healthiest?

It's safe to say none of them are better than the other. All potatoes are nutrient-dense, full of fiber, vitamins, minerals, and antioxidants. However, if you're interested in the small details, the potatoes with dark-colored flesh seem to be healthier.

They contain twice the amount of antioxidants as the other kinds. Additionally, if you want healthier options, the way you cook the potato matters more. So, if you lean more on the health-conscious side of cooking, go for the low-fat methods.

Broiling or baking will do better than frying. Apart from this, you can't go wrong with choosing any potato. All that matters is the dish you plan to make. It will determine what potato will work best for your meal.

Are Yellow Potatoes Good For You?

Now that you know the cooking method matters more than the potato, how good are yellow potatoes for you? What are some of the nutritional goodness that it holds over the others?

However, the place of origin also plays a role in their glycemic index. For example, a russet potato from Australia will have a GI of 87 to 101. On the other hand, a russet from Canada can hold a GI of 56 to 77.

Some of these values will seem small enough that it doesn't matter. But, it all depends on how much of them you eat. They can add up over time. This way, you can meet your daily micronutrient needs.

Now let's say you're at a store. In this situation, you're not spending much time researching what potato is better than the other. Two of the most popular choices are Yukon Gold and Russet potatoes.

If these are your only two options, would Yukon Gold be better? That would depend on your needs. Russet potatoes fall in the starchy category. Yukon Golds fall in the middle. So, they're great for most kinds of dishes.

Accordingly, Russet potatoes will only work for some meals. When you cook a potato with high starch content, the starch molecules expand and burst. It makes them the better choice if you're making french fries or mashed potatoes.

Since Yukon Golds hold more moisture, it helps them retain their shape better. Yukon Gold would be better if you're in the mood for potato salad or soup. They can even fit as a substitute for Russets when making mashed potatoes.

In any case, it's best if you follow the recipe you're using, if any. When you want to play it safe, go for the all-purpose kind. Thus, Yukon Gold potatoes will most likely fit your needs better.

What Are Waxy Potatoes? 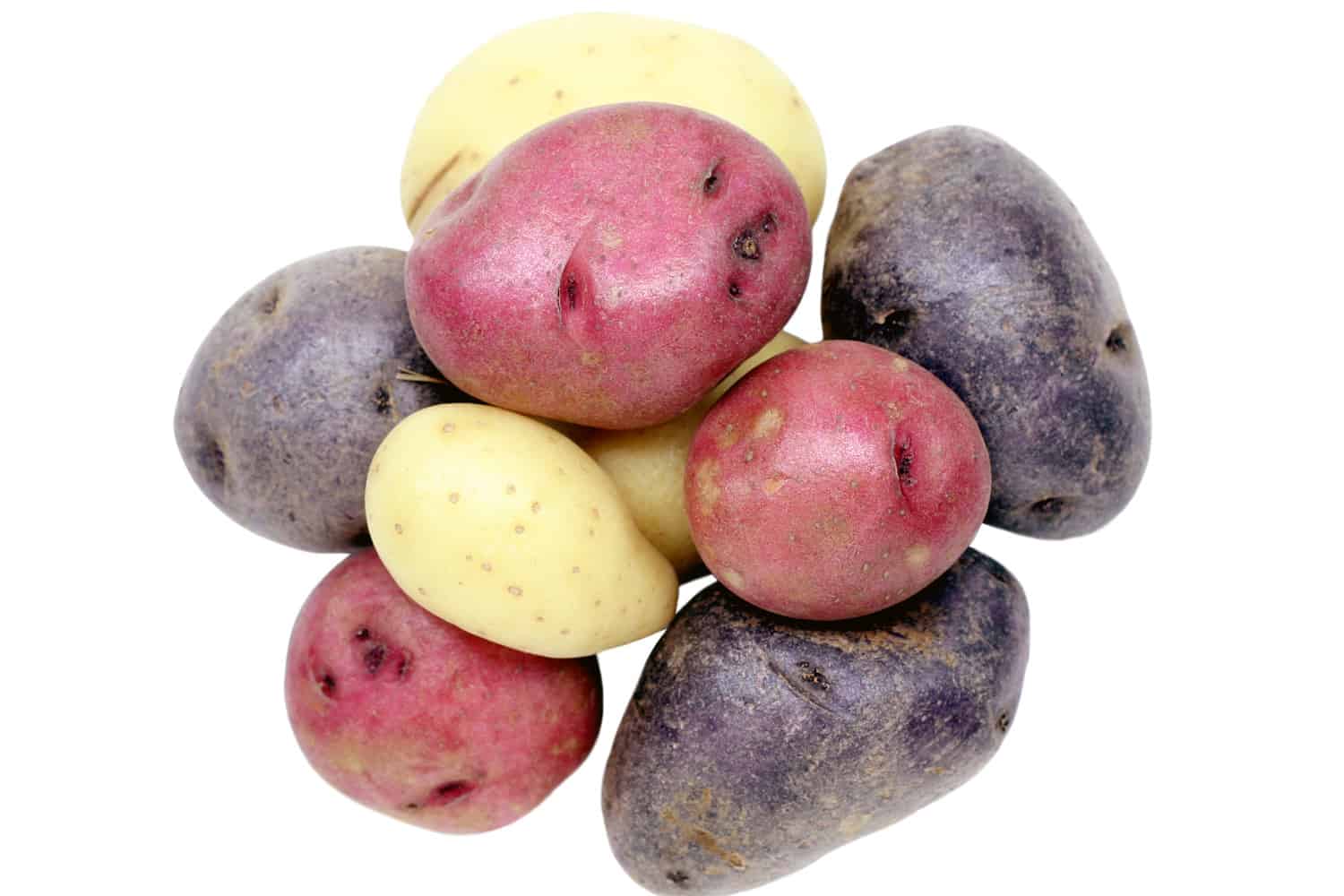 There are two varieties of potato that you should be familiar with now. Starchy potatoes, like Russet, have a high starch content. All-purpose potatoes, like Yukon Gold, are in the middle ground.

All that's left is the waxy variety. Waxy potatoes are the opposite of starchy ones. In other words, they're high in moisture and low in starch content.

When you cook them, they have a creamy, firm texture. As you might have already guessed, a waxy potato's high moisture content allows it to hold its shape. You can identify waxy potatoes by scratching the skin.

The skin is delicate and easy to damage. Regardless, waxy potatoes do well for dishes like a gratin, potato salad, and Cacio e Pepe potatoes.

As you can see, there are a lot of details to go over when discussing the differences between potatoes. Now we know that Yukon Gold is a type of yellow potato. More importantly, Yukon Gold falls in the all-purpose category. Thus, they're safe to use for many kinds of dishes.

We hope you found the information above helpful! Before you go, do you have other potato concerns?

Are you wondering how many potatoes you'll need for mashed potatoes? To learn more, check out our post:

How Many Potatoes Do You Need For Mashed Potatoes?

Are your mashed potatoes coming out lumpy? If you want to find out why that's the case, check out our post:

Should Mashed Potatoes Be Lumpy?

Can You Freeze Frying Oil?

Can You Cut Meat On A Wood Cutting Board? [Raw And Cooked]

Can You Make A Cheese Board Ahead Of Time?