Boiling potatoes is an easy way to get them ready for your favorite side dish. But how do you know when they are done boiling? Let's take a look at a simple way to test if your potatoes are boiled.

Potatoes are done boiling when they are tender all the way through. To test this, take a knife, fork, or skewer and stick the largest potato. The potatoes are ready if the utensil goes all through the potato with ease.

Whether you are making mashed potatoes or boiled potatoes as a side, you will want to make sure they are cooked properly. In this article, we will take a closer look at how to boil potatoes to perfection. In addition, we will answer other frequently asked questions about boiling potatoes. 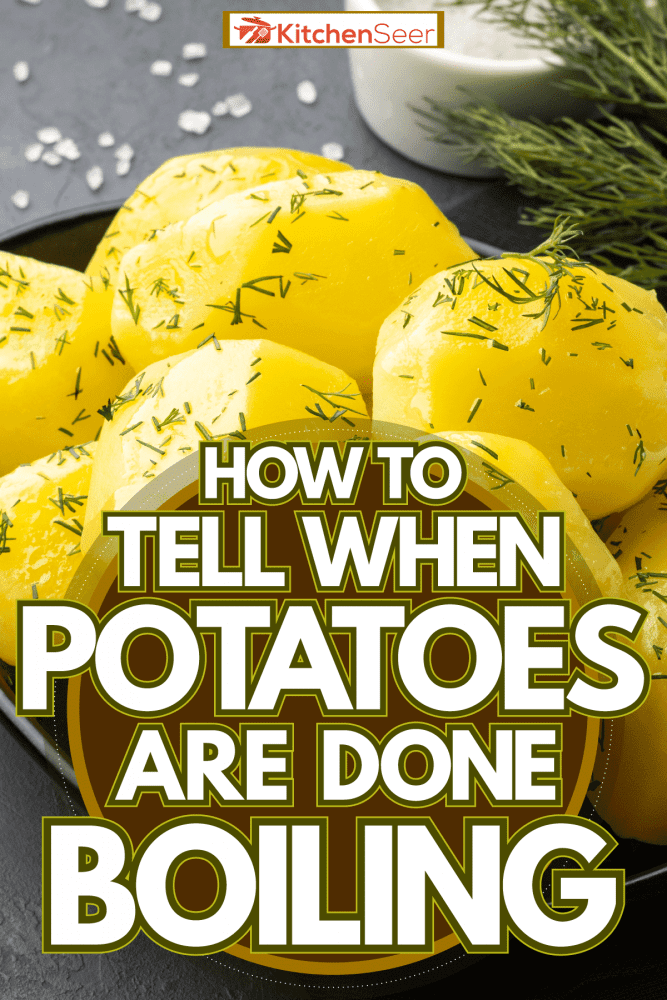 How Do You Boil Potatoes Properly?

Potatoes have been used as a food source for centuries. They are a good source of carbohydrates and are very versatile. You can boil them, bake them, fry them, or even eat them raw.

It is important to start with clean, fresh potatoes to boil. First, scrub and peel your potatoes before boiling them. Then, cut the potatoes into even pieces so they will cook evenly and more quickly.

Place the potatoes in a pot with salted cold water (a pinch or two of salt is plenty). Placing your potatoes in cold water will ensure that the outsides don't cook faster than the inside. The water should be enough to completely cover the potatoes. 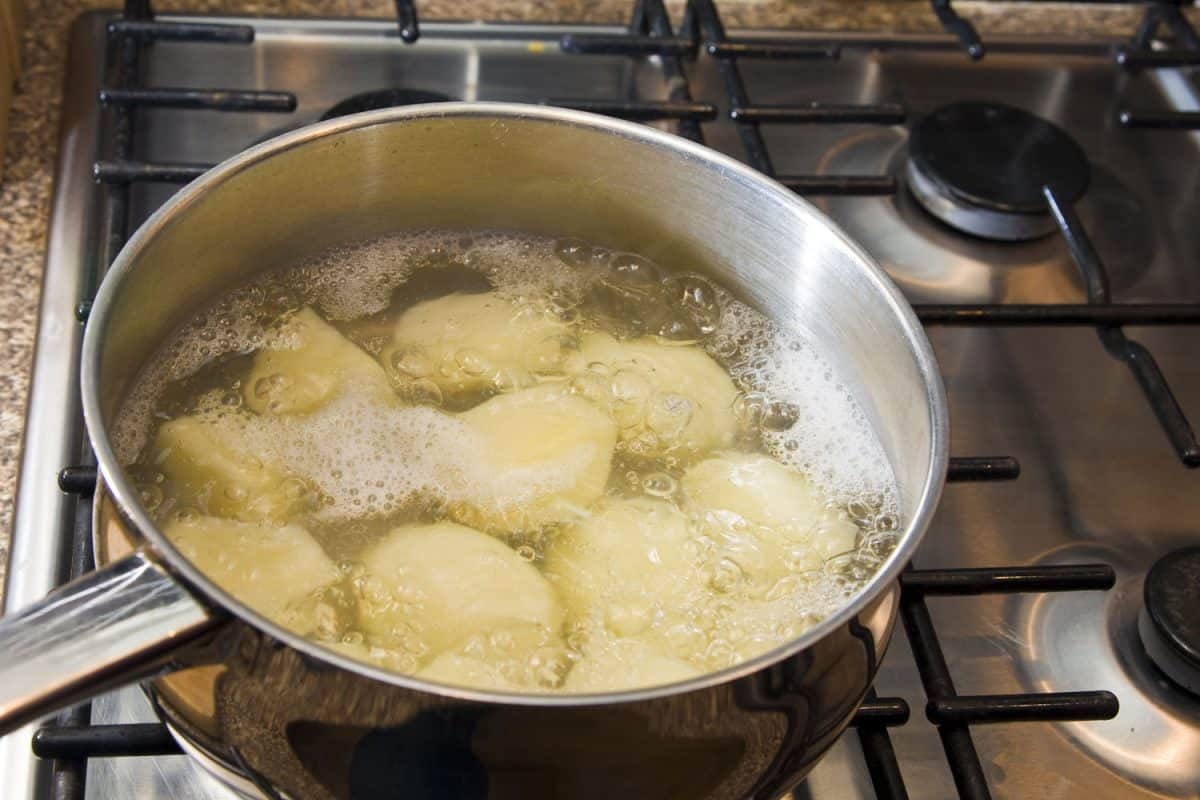 Bring the pot of potatoes to a boil on high heat. Once boiling, lower the heat to medium-low or low heat and let them simmer until they are cooked all the way through. This should take 15-20 minutes depending on the type and size of potatoes, so check them at the 12-minute mark for doneness.

Once your potatoes are done cooking, drain the water using a colander. Then, let your potatoes cool before adding any toppings or serving.

Once your potatoes are cooled, you can use them in any number of dishes or eat them plain with butter and a dash of parsley. Boiled potatoes are a great addition to salads, soups, stews, or as a side dish. For a visual demonstration, take a look at this video on how to boil potatoes:

What Are The Different Types Of Potatoes That Can Be Boiled?

There are many different types of potatoes that you can boil. The most common type of potato is the russet potato. This type of potato is large and has brown skin with white flesh. They are good for baking, frying, and mashing.

You will find that russet potatoes take longer to boil than other types of potatoes (20-30 minutes). Another type of potato is the Yukon gold potato. These potatoes are small to medium in size and have yellow skin with yellow flesh. They are good for boiling, roasting, and mashing. 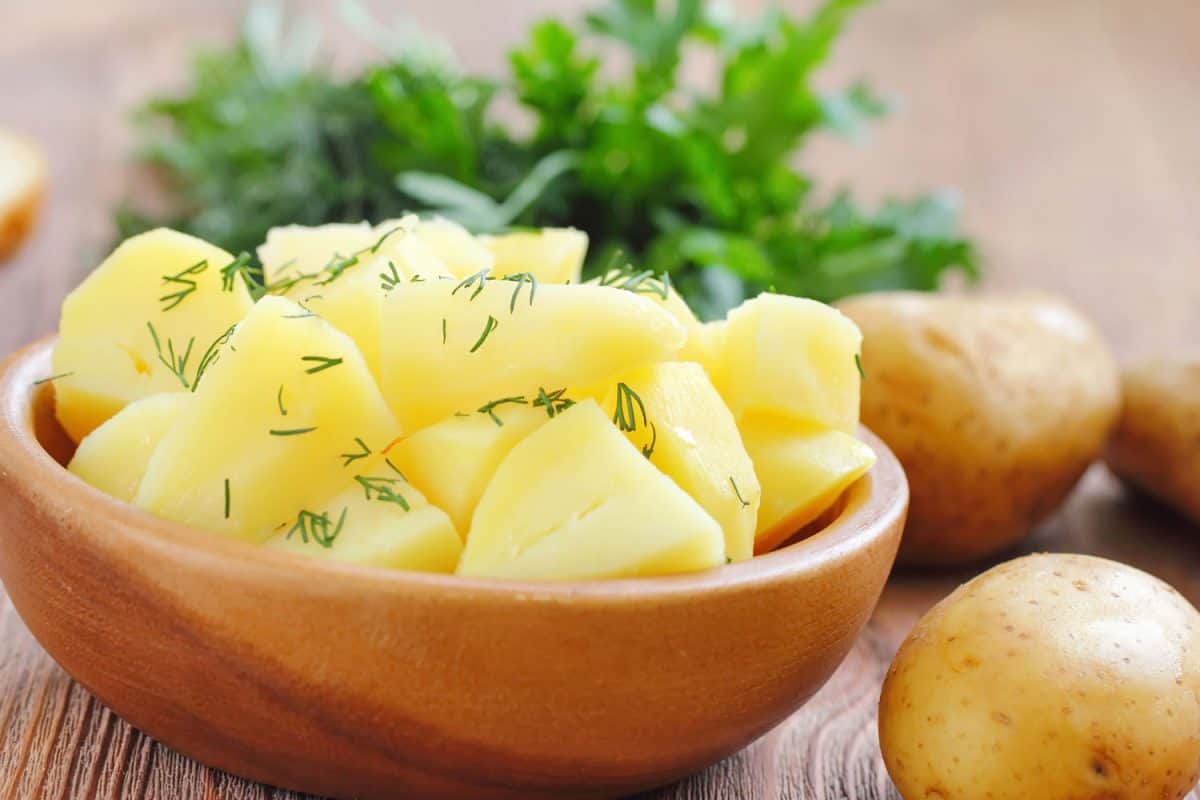 Yukon gold potatoes will take less time to boil than russet potatoes (15-20 minutes). Red potatoes are similar to Yukon potatoes when it comes to cooking time. They are small to medium sized with red skin and white flesh. These potatoes are good for boiling, roasting, salads, and soups.

No matter what type of potato you choose, cutting them into smaller pieces will help them to boil faster.

What Is The Difference Between Boiling And Simmering Potatoes?

Technically, you will end up with the same result—a tender potato—whether you boil or simmer your potatoes. The difference is how much time you have before you need the potatoes for your dish.

In addition, if you simmer your potatoes, they will have a softer texture since the water is not boiling as rapidly. This can make them easier to mash.

Since boiling is at a hotter temperature, you run the risk of overcooking your potatoes. When this happens, you may be left with water-soaked potatoes. As a result, when you mash them, you may find that your potatoes are a soupy mess instead of fluffy.

That's why it is essential to check your potatoes frequently and not let them boil for too long. Start checking your potatoes at the 12-minute mark to see if they are done.

Is It Better To Boil Potatoes Whole Or Cut Up?

It is better to cut your potatoes into smaller pieces before boiling them. Smaller pieces of potato will cook faster and more evenly than whole potatoes. In addition, if you are boiling potatoes for a dish such as mashed potatoes, you will find it easier to mash smaller pieces.

It also depends on your preference. If you find it easier to monitor your potatoes whole, stick to that method. Find what is easiest for you and gives you the best results.

Why Do You Add Salt To Boiling Water For Potatoes? 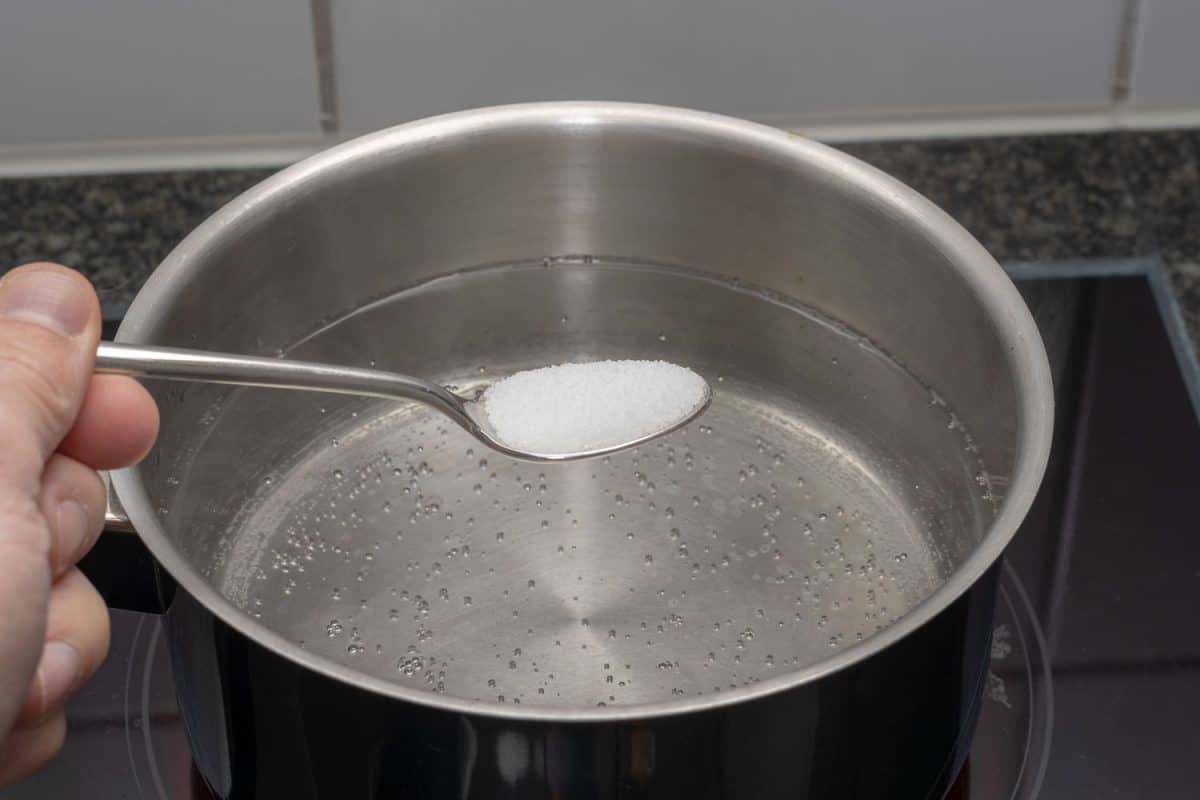 Adding salt to boiling water for potatoes is a matter of preference. Some people find that it enhances the flavor of the potato, while others do not notice a difference.

If you are boiling potatoes for a dish that uses salt, you may want to add some to the water. This will help the potatoes absorb the salt and flavor your dish more evenly.

In addition, adding salt to the boiling water will increase the temperature. As a result, the starch in the potatoes will cook through, giving you a creamier finish for mashed potatoes.

Why Are My Boiled Potatoes Still Hard?

Potatoes have pectin that needs to be broken down in order for the potato to become soft. The best way to do this is by cutting them into smaller pieces or by adding salt to break down the pectin.

How Long Can Boiled Potatoes Be Left Out?

You should not leave boiled potatoes out for more than two hours. This is because they are a food that is susceptible to bacteria growth.

If you want to use the potatoes later, keep them covered in a cool place such as a refrigerator. You will also want to reheat the potatoes before eating them to ensure they are safe to eat.

Do You Have To Peel Potatoes Before Boiling? 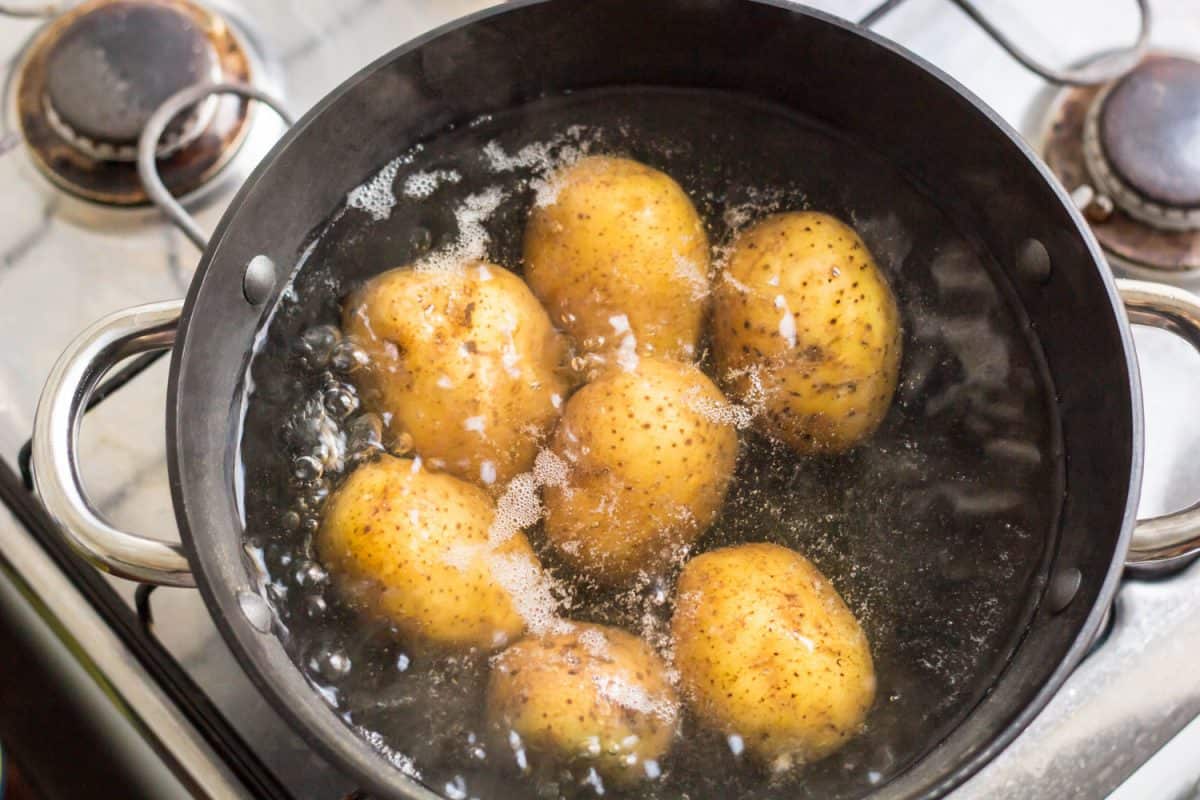 This is another question that comes down to preference. In most mashed potato recipes, the potatoes are peeled before boiling. By peeling the potatoes, you will have a creamier mashed potato.

If you like the skin in your mashed potatoes, then there is no need to peel them before boiling. Just make sure to give them a good wash to remove any dirt before boiling them.

Having some skin in your mashed potatoes will give a unique finish, and the dish will have more nutrients. Potato skins contain fiber, vitamins, and minerals.

So, there is no need to peel your potatoes before boiling unless you want to.

How Far Ahead Can You Peel Potatoes Before Boiling? 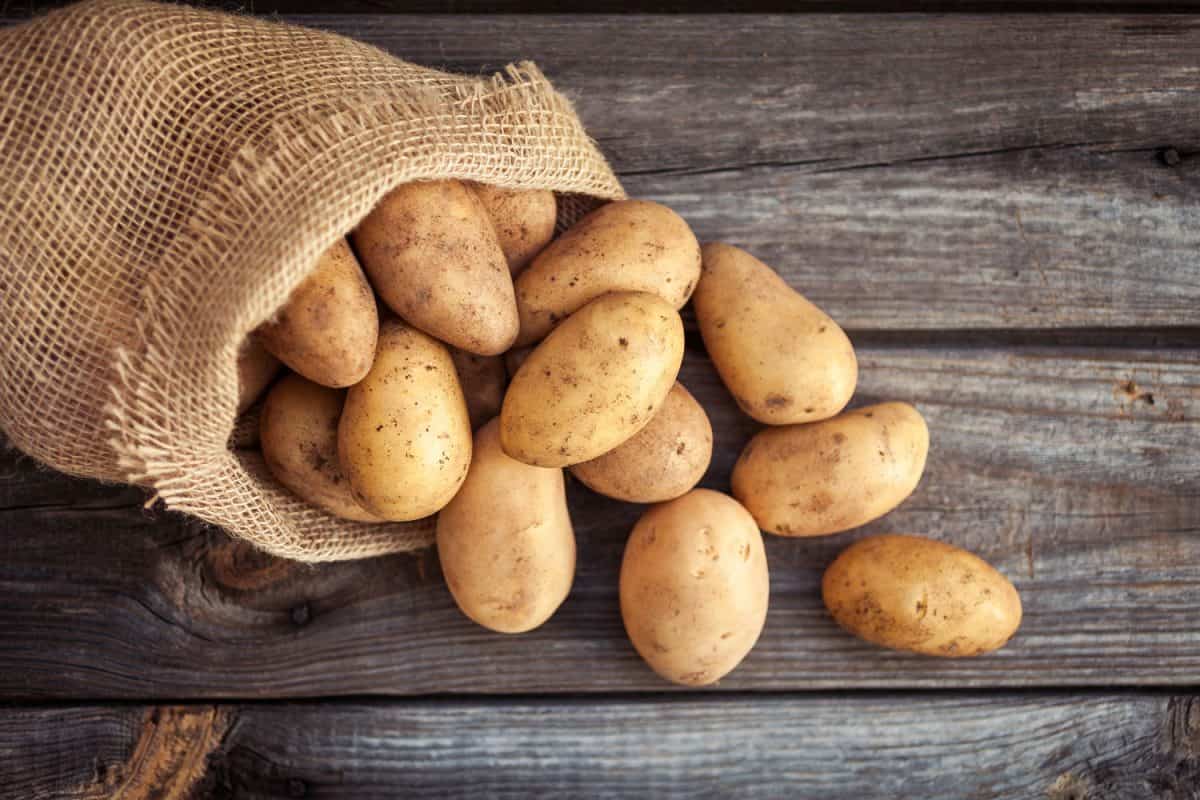 You can peel your potatoes up to 24 hours before boiling them. Just make sure to store them in a cool, dark place such as a refrigerator.

If you peel your potatoes too far ahead of time, they will start to discolor. This is because the oxygen in the air causes the potatoes to turn brown.

You can soak the potatoes in water for 10 minutes before boiling them to avoid this. This will help them retain their color.

How Long Are Boiled Potatoes Good For?

Boiled potatoes are best eaten the day they are made. However, you can store them in the refrigerator for up to 3-5 days.

When storing boiled potatoes, make sure to place them in a covered container. This will help them retain their moisture and prevent them from drying out.

You can also freeze boiled potatoes for up to 3 months. This is a great way to meal prep for the future. Then, when you are ready to eat them, simply thaw them in the refrigerator overnight and reheat them.

If you plan to boil potatoes and freeze them, then it is better to parboil them. This will help retain their texture and flavor. 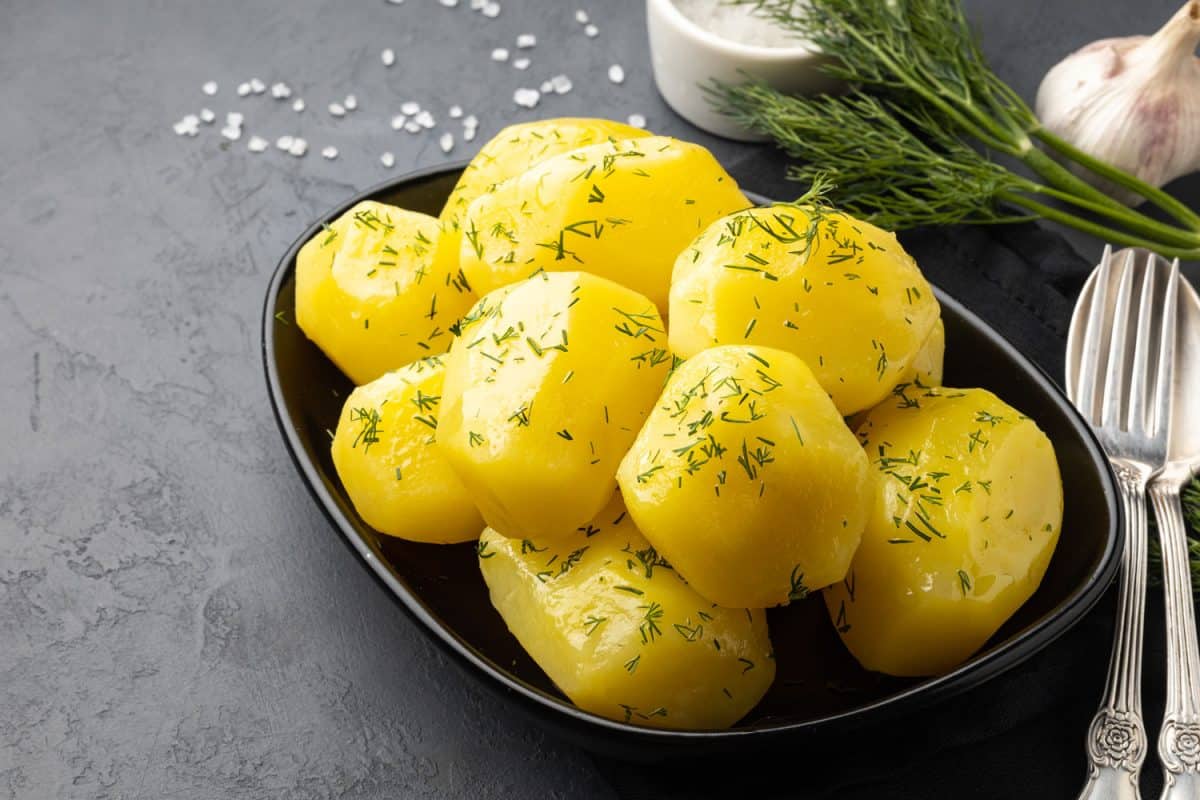 There are different methods for boiling potatoes, but no matter which method you choose, avoid overcooking them. This will result in soggy, mushy potatoes.

The best way to check if your potatoes are done is by piercing them with a fork. If they are soft all the way through, they are done.

If you want to add some flavor to your boiled potatoes, try adding some fresh herbs or garlic. This will give them a boost of flavor that will make them even more delicious.

Now that you know how to boil potatoes, it's time to get cooking!

Before you go, take a look at these other potato guides:

How Long Do Mashed Potatoes Last In The Fridge?

Should You Keep Cucumbers In The Fridge? [The Answer May Surprise You!]

How To Properly Dice A Tomato [3 Ways]

What Dips Do You Have With A Cheese Board? [8 Incredible Suggestions]