Fish is one of the world's most popular seafood, but what if you ingest a fish scale by accident? Are they edible or safe? Fortunately, we have the answers, and here is what we have discovered.

Fish scales are generally edible. However, if you consume them by mistake, you risk choking.

What Are The Nutritional And Health Benefits Of Fish Scales?

People worldwide like eating various types of fish, depending on the variety and dish. When cooking fish, the first thing we do is scrape off and discard the scales.

You might not know that consuming them has any `nutritional benefits. The nutritional properties of fish scales are listed below.

Fish scales are high in collagen. Collagen is excellent for strengthening ligaments and bones, as well as for supporting joints. Increasing your collagen intake will help you obtain smoother skin and stronger hair and nails.

Collagen is a peptide used in the medical, health care, nutritional, and ornamental sectors. Marine fish scales are an excellent source of collagen.

It is extracted using a sophisticated enzymatic digestion process. The scales of Sardinella longiceps (Oil Sardine) contain a high amount of collagen.

Omega 3 And Other Healthy Fats

One of the reasons people include fish scales in their meals is that fish is high in omega-3. Fish scales are a great source of fats for your body.

Fish scales differ in structure and form. Different types of scales in fish are frequently observed as species traits.

Cosmoid scales, also known as cosmine, are extremely rare on fish. They were a distinguishing feature of several extinct fish, including placoderms and ostracoderms.

You can also find these scales on coelacanths, which are still alive. Lungfish bodies were also found to have cosmoid scales. These scales appear to be semi-circular scales positioned relatively close to one another at first view.

These scales are widespread in cartilaginous fish. It can be seen in sharks, skates, and rays. If you examine the skin of a fish with placoid scales, you'll notice that they're pretty close together.

It usually results in a sandpaper-like texture on the surfaces of these fishes. 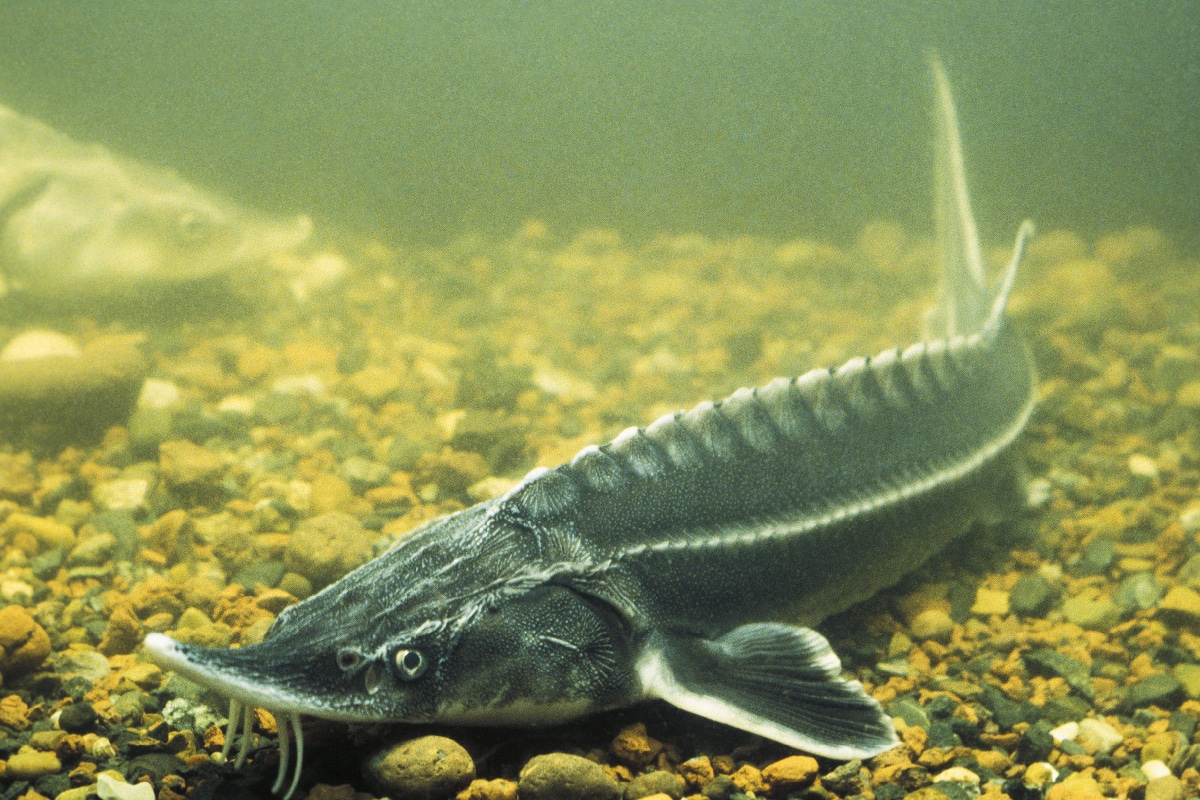 The shape of ganoid scales is similar to that of rhomboids. Peg-and-socket joints link these scales. They have a bony basal layer, a dentin layer, and an outer ganoine layer. Fishes with this scale include bichirs and sturgeon. 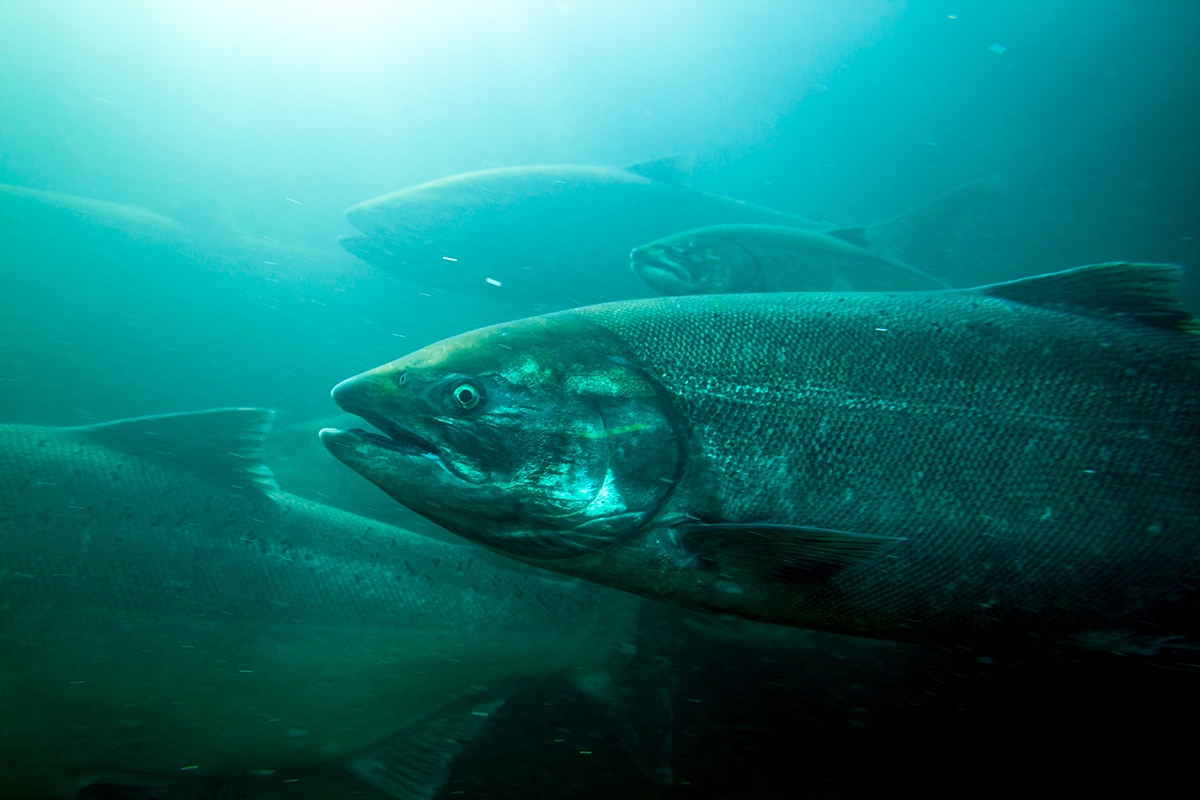 As the name implies, Cycloid scales are round, transparent, and thin. The scale's surface layer comprises calcium-based salts, while the inner layer has mainly collagen.

As a fish grows, its scales expand, forming concentric layers similar to tree rings. Scientists count the rings to estimate a fish's age in certain species. This scale is found in lower-order teleost fishes such as rayed fish and salmon.

Do You Need To Scale Your Fish Before Cooking?

Scaling the entire fish is a chore since the scales are unpleasant to eat. However, scaling does not apply to all fish. Certain bottom-feeding fish, such as catfish and bullheads, lack scales.

You also don't want to scale a bigger fish. If your fish is larger than a salad plate, you can filter it without scaling. Scaling only works best on small or medium-sized fish.

How Do You Scale A Fish? 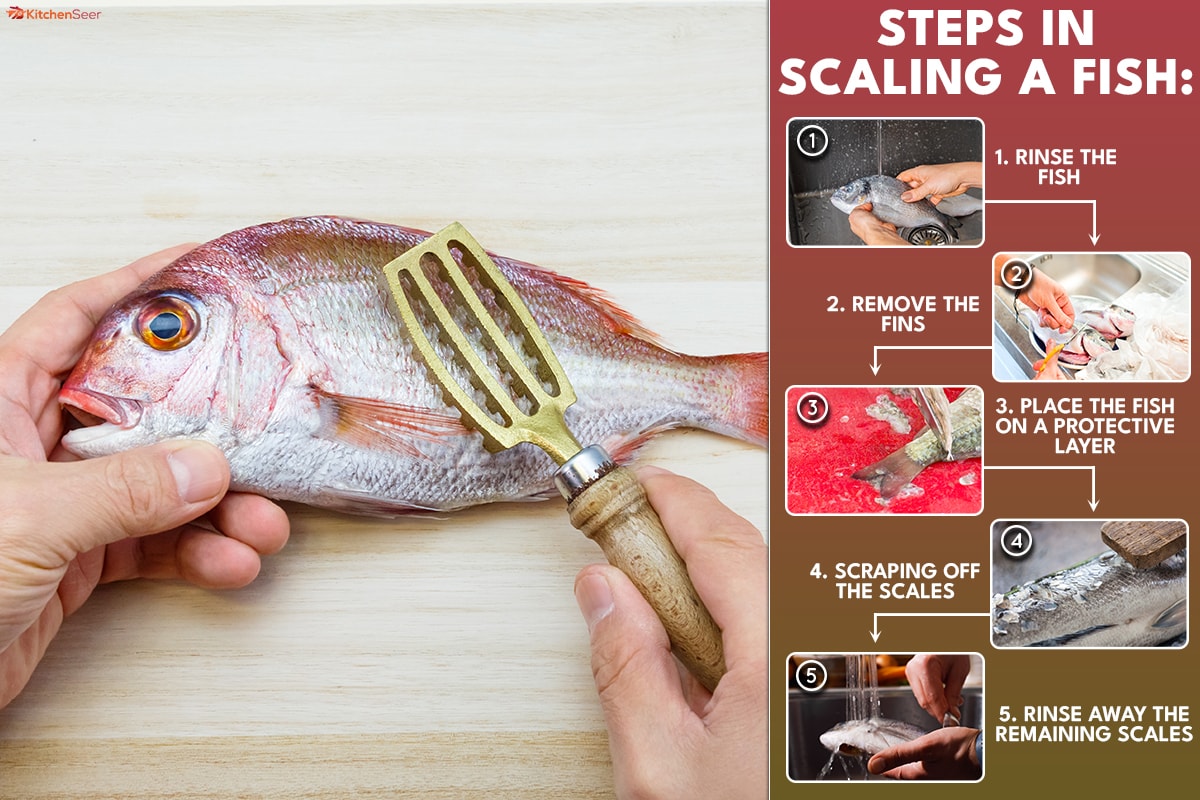 A whole fish makes an excellent and impressive meal, whether in the wilderness or at home.

But before you can cook and consume the fish, you must prepare it, trim the fins, remove the scales, and clean or remove the guts.

Rinse your fish well with water before starting to scale it. It removes the slime on the scales. After rinsing the fish, pat it dry with a paper towel. 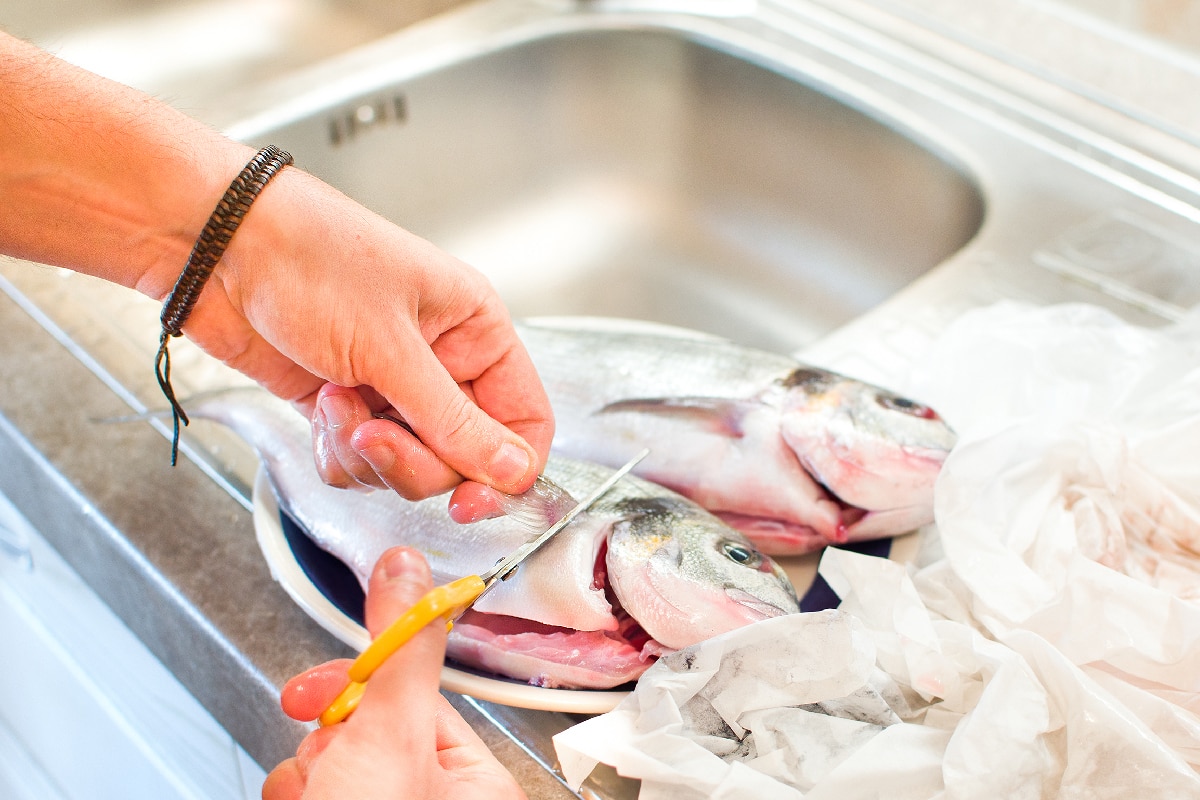 You'll remove all of these fins as near the body as possible. It is important to note that the dorsal fin, in particular, can have some extremely prickly bones.

Scaling the fish while still connected to the dorsal fin might harm you. With the fins removed, scaling becomes much easy.

3. Place The Fish On A Protective Layer

Set up a shield that will capture the scales as you remove them. Scales are messy, so you don't want them to get everywhere. Choose something you can toss in the garbage.

Cleaning up will be a snap if you use a newspaper, parchment paper, and cardboard.

4. Scraping Off The Scales 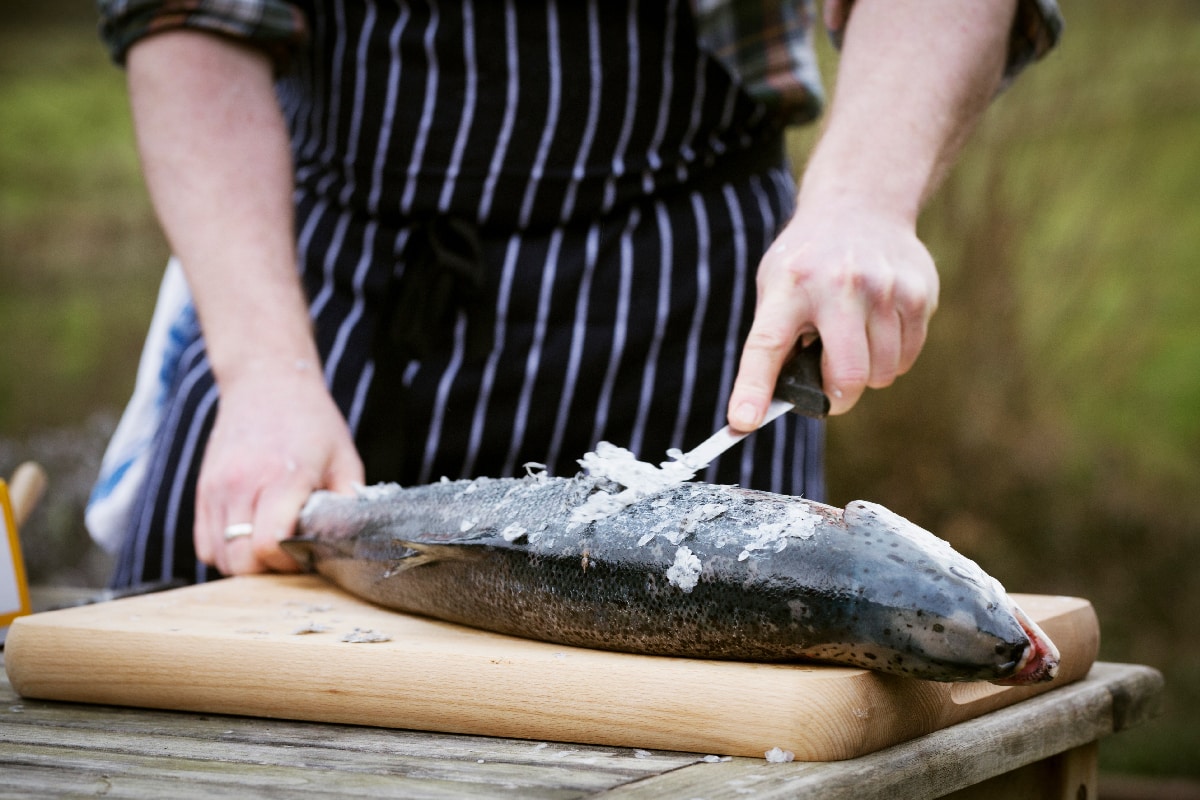 Lay the fish flat on the work surface, but grasp hold of the tail to keep it from slipping about while you remove scales. Safeguard your hands with a pair of disposable gloves.

Use the spine of the knife rather than the sharp edge. Alternatively, if you have a fish scale peeler, you can use it. Maintain a 45-degree angle when holding your knife's spine. Place the knife's spine against the fish's skin near its tail fin.

Rake the knife's spine along the side of the fish, from tail to head. Use long and even strokes. You'll need to apply some pressure, but not much. As you scrape, the scales will begin to fall off.

Continue until no scales remain on that side of the fish. Flip the fish over and repeat on the other side.

Check this product on Amazon.

5. Rinse Away The Remaining Scales

Hold the fish under cold running water once you have removed the scales with the knife. The water should effectively remove any remaining scales from the fish. Rinse until there are no more scales.

How Should You Remove Fish Guts? 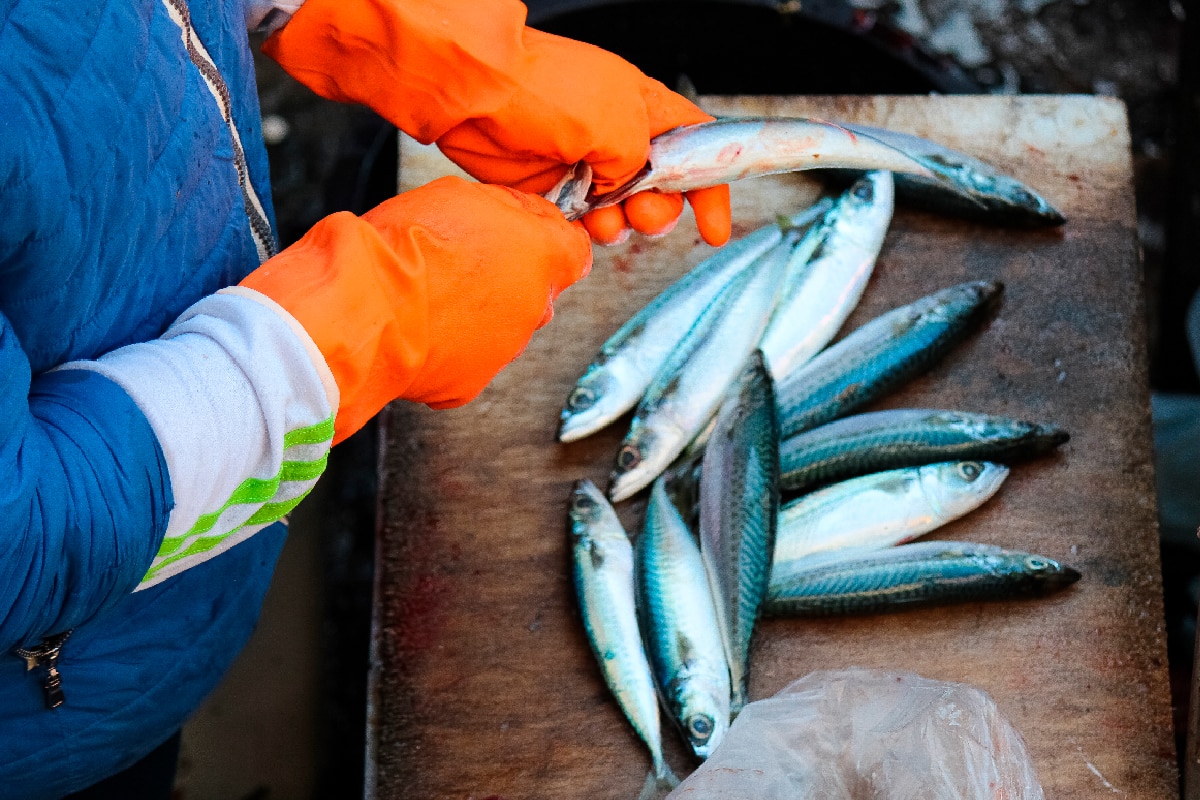 A fish's guts are inedible and must be removed before cooking. Wear latex gloves to protect your hands while performing this task. The steps for removing fish guts are as follows.

1. Spread Out Another Piece Of Paper

Place another layer of newspaper on top, followed by the cutting board and the fish.

2. Slide The Knife Into The Fish Vent

Line up your fish on a firm cutting surface with the belly towards you. Tilt the fish at a 45-degree angle, with the head pointing away from you.

Slide the tip of the knife into the anus of the fish, the sharp edge towards the fish's head. Depending on the size of your catch, insert it one or two inches into the vent.

3. Cut Your Way Up Towards The Neck

If you burst the intestines, you'll wind up with a terrible mess inside your fish. Moreover, if you remove the head later, you can cut through the neck and gills as you finish the cut.

4. Scoop The Gills and Entrails

Scoop out the entrails by spreading the body open. Find the anus of the fish and cut it in a "V" or notch form. Make sure you also remove the kidney.

If the fish has a kidney, it will be located higher up along the backbone. Scrap it out with a spoon and wrap everything and throw it away.

Place your fish in a big sink or washing area, vent side up. Turn on a steady flow of cold water and open the stomach. Allow water to flow through your fish's abdominal cavity.

It would help if you rubbed the internal walls of its body with your hands or a spoon. Clean the fish thoroughly and remove any lingering residue from the organs.

Maintain reasonable health procedures and keep your working area clean. Collect the intestines, head, and scales and place them in a rubbish bin after wrapping them in the newspaper.

To Finish It Up

Eating fish or fish scales is one method to increase collagen and healthy fats in your diet naturally. Cooking them properly and eating the soft ones is one excellent way to enjoy them.

Made it to the end? Check out these related articles!

For How Long Should You Cook Fish?

How Long Can You Leave Shrimp Out? [Raw And Cooked]

At What Temperature To Bake Ribs?

Can You Eat A Barracuda? [Yes! Important Tips On Preparing It Safely!]