When you need dexterity and precision to get the details of your dish just right, nothing beats a good paring knife! Sometimes overlooked when setting up the kitchen for success, this tool definitely can make the difference between a clumsily executed dish, and one you would proudly serve the most distinguished guests. You may be wondering just how long your paring knife should be. We have thoroughly looked into this question and have found some answers for you!

A paring knife may be an essential kitchen tool! We'll discuss how it's different than a utility knife and the different ways you can use this type of knife. Keep reading as we break down how to handle a paring knife, and whether it's actually necessary to have one! 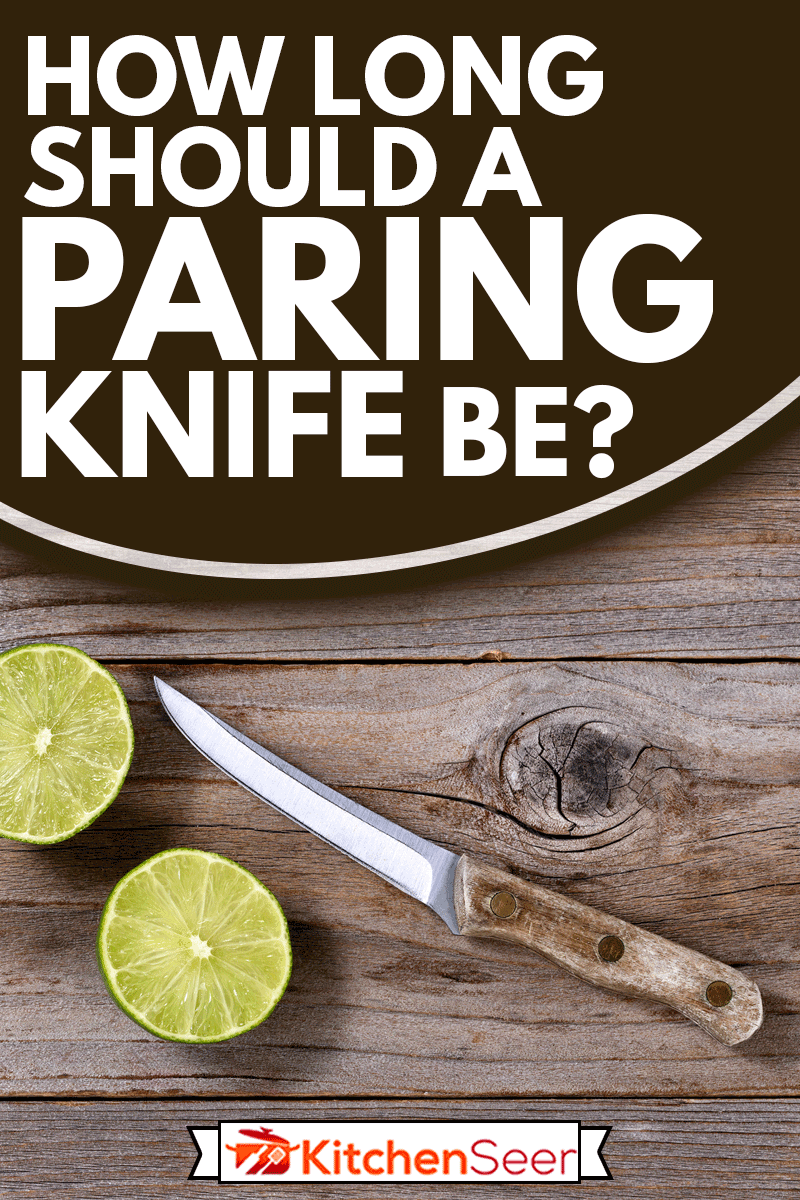 What Is The Point Of A Paring Knife?

A paring knife is a smaller knife that allows the user to cut, slice, and peel with greater precision than that allowed when using a regular chef's knife.

Use this type of knife for everything from chopping and mincing herbs, to decorative cuts and slices that allow for a higher-class presentation.

To get the most versatility out of your paring knife, choose one that is of a sturdy but lightweight construction.

A blade that is 3 to 3.5 inches will be the easiest to wield. This is a good example of a standard universal 3.25-inch paring knife that will allow you to accomplish those tiny tasks:

In addition to the standard universal shape, three other types of paring knives can be used to different effects.

To slice or peel tiny fruit like grapes and cherry tomatoes, the sheep's foot paring knife is the tool to have. This knife has a flat blade with a blunt tip which makes it easier to keep contact with a cutting board.

Use this type of knife for finely mincing items such as shallots and garlic as well. Its size and shape make it easy to control when finer motor skills are needed.

This modified version of a sheep's head paring knife has the desired flat blade with the point of a traditional paring knife making for a truly versatile tool.

See this example of a modified sheep's foot paring knife on Amazon.

A bird's beak paring knife gets its name from the shape of the blade. It is curved and pointed downwards.

The curved edge allows for peeling fruits and curved vegetables, while the tip is great for removing eyes from spuds and small seeds from fruits like strawberries.

Use this knife for any type of food where you would need to cut in the air, by hand instead of on a cutting board.

Another name for this unique-looking tool is a tourné knife named for the French technique that its shape was originally intended for.

Though some professionals say that this technique is outdated, and not necessary, others argue that you should know how to turn vegetables for a pleasant presentation or a more even cook.

Save leftover pieces for soup stocks and you'll have little to no waste! This video demonstrates using the tourné knife:

Use this type of knife for thinly slicing small pieces of cheese or scoring meats like ham to hold seasonings. Use this versatile knife for trimming cakes and cutting through sticky dough for making cookies and rolls.

Other popular uses for this type of knife would be for slicing items such as tomatoes or green peppers, where you don't want to smash or crush the pieces while trying to cut through the skin.

For more on using a serrated paring knife for cutting items like tomatoes, read our article here!

Nice-looking serrated knives can be purchased in a set and double as steak knives for when steak and baked potatoes are on the menu. They are also great to use for setting a table in the place of personal bread and butter knives.

How Do You Handle A Paring Knife?

Though the ways to use a paring knife can be many, there are some common ways you would hold this type of knife.

To chop and mince small items on the cutting board hold the knife between your thumb and forefinger. Your non-dominant hand should be used to steady the items while curving against the knife to ensure safety.

What Other Use Does A Paring Knife Have Besides Slicing?

A paring knife is a great tool for more than just slicing and dicing small items.

A paring knife can be used to core items like tomatoes, hull strawberries, peel apples, zest a lime, or supreme an orange!

They are also used for decorative knife skills such as making flowers and other art out of vegetables and fruit.

For peeling and using off the cutting board, grip your vegetable or fruit firmly in the tips of your non-dominant hand.

Hold the knife in your dominant hand using your forefinger to guide the knife toward your thumb of the same hand while your non-dominant hand supports, but allows the vegetable to turn.

To remove seeds and do other precision work, grip the blade between your thumb and forefinger while the handle rests in your palm. This video demonstrates some of the best uses and techniques for a paring knife:

How To Care For A Paring Knife

In the past, when a paring knife went dull, it was recommended to discard it and get a new one.

In current times, with a greater focus on the reduction of waste, you can now get high-quality durable paring knives that with the right care, can last for years.

Here are a few tips to make sure your paring knife stays sharp.

Consider purchasing one that comes with a cover.

Click here to see this paring knife with a self-sharpening cover on Amazon.

Use a knife magnet to keep your paring knife from being jostled against other cutlery.

Click here to see this magnetic strip for storing knives on Amazon.

Hand wash the knife and dry separately, to avoid water deposits and stains, and sharpen with a high-quality sharpener, designated for smaller knife blades.

See this sharpener for smaller blades on Amazon.

What Is The Difference Between A Utility Knife And A Paring Knife? 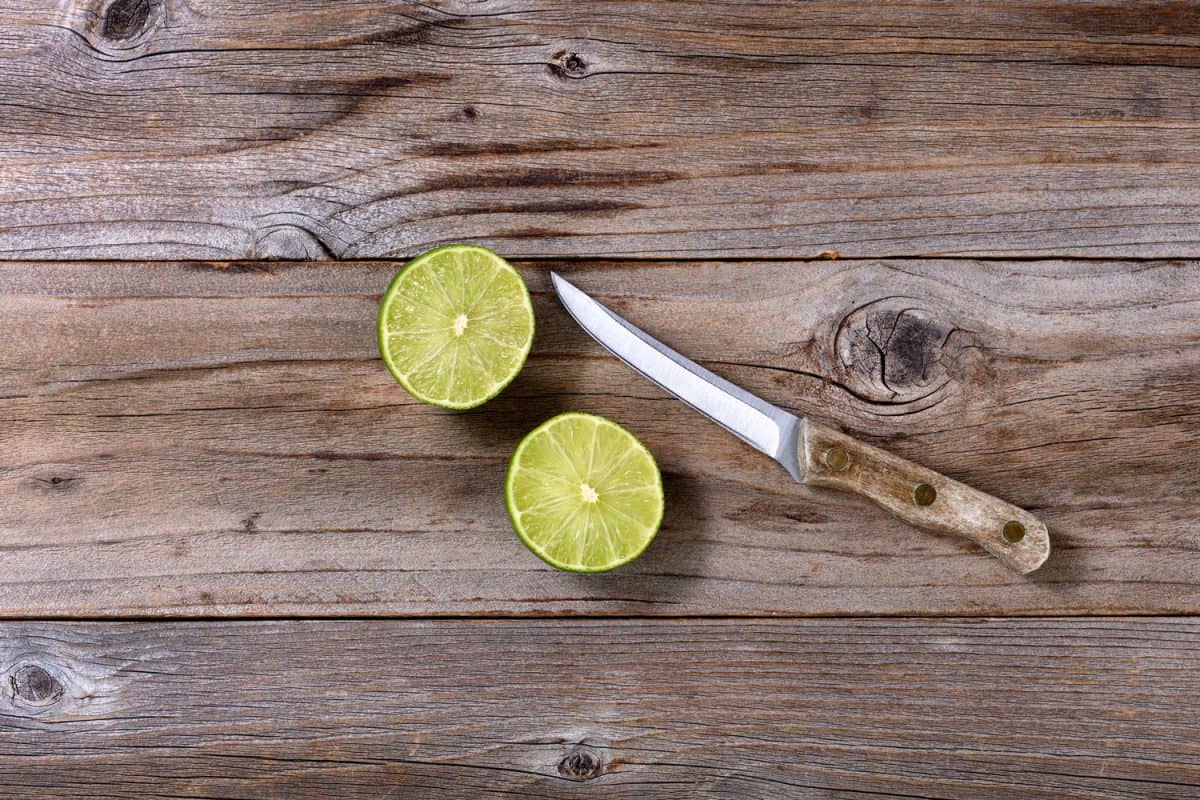 Though the utility knife and paring knife may be interchangeable in some kitchens, they are different in appearance and function.

A utility knife is larger than a paring knife but smaller than a traditional chef's knife. These knives are typically 4 to 6 inches in length with a slightly curved blade.

This is a heavier knife, use it to chop and slice on a surface.

They do overlap with the paring knife in that their smaller size can make them a good choice when peeling and dicing mid-sized items like potatoes.

A paring knife is smaller and narrower. Its function is also much more specific. When tiny details and dexterity that come with the lightweight handling of this knife are important, it's best to stick to a paring knife.

Click here to see an example of a utility knife on Amazon.

Can You Use A Paring Knife For Everything?

Though the paring knife is a great tool, it cannot be used for everything! For items like cantaloupe, pumpkin, or watermelon you would need a good chef's knife.

Click here to see an example of a Chef's knife on Amazon.

Though a  paring knife is great for deveining items such as shrimp, it should not be used for boning meats. For standard chopping jobs like larger onions, potatoes, or squash, a utility knife or larger is best.

For more on knives for boning and filleting, read this article.

Read our post on the best knives for chopping vegetables here.

Is A Paring Knife Necessary?

Now that you know how long a paring knife should be and what you can use a paring knife for, you may be wondering if it's actually a necessity! This would depend on your own individual cooking personality.

Are you a creative chef that wants to have the exact tool for your detailed kitchen tasks? If the answer is yes, then get a good paring knife or two!

Having one on hand will ensure that you will get that precise cut every time in order to execute your next dish like a professional!

Why Do Spatulas Have Holes?

How To Cook Chicken In A Dutch Oven

Can You Put A Rolling Pin In The Dishwasher?