You can leave raw or cooked shrimp out for a maximum of two hours before needing to either cook or refrigerate it. At temperatures above 85 degrees Farheinet, the shrimp will only be good for an hour.

In this article, we will learn how long you can leave shrimp out at room temperature. We will also learn the answers to other interesting related questions, such as how long can you leave frozen shrimp out, and what is the best way to thaw shrimp? Keep reading to learn more. 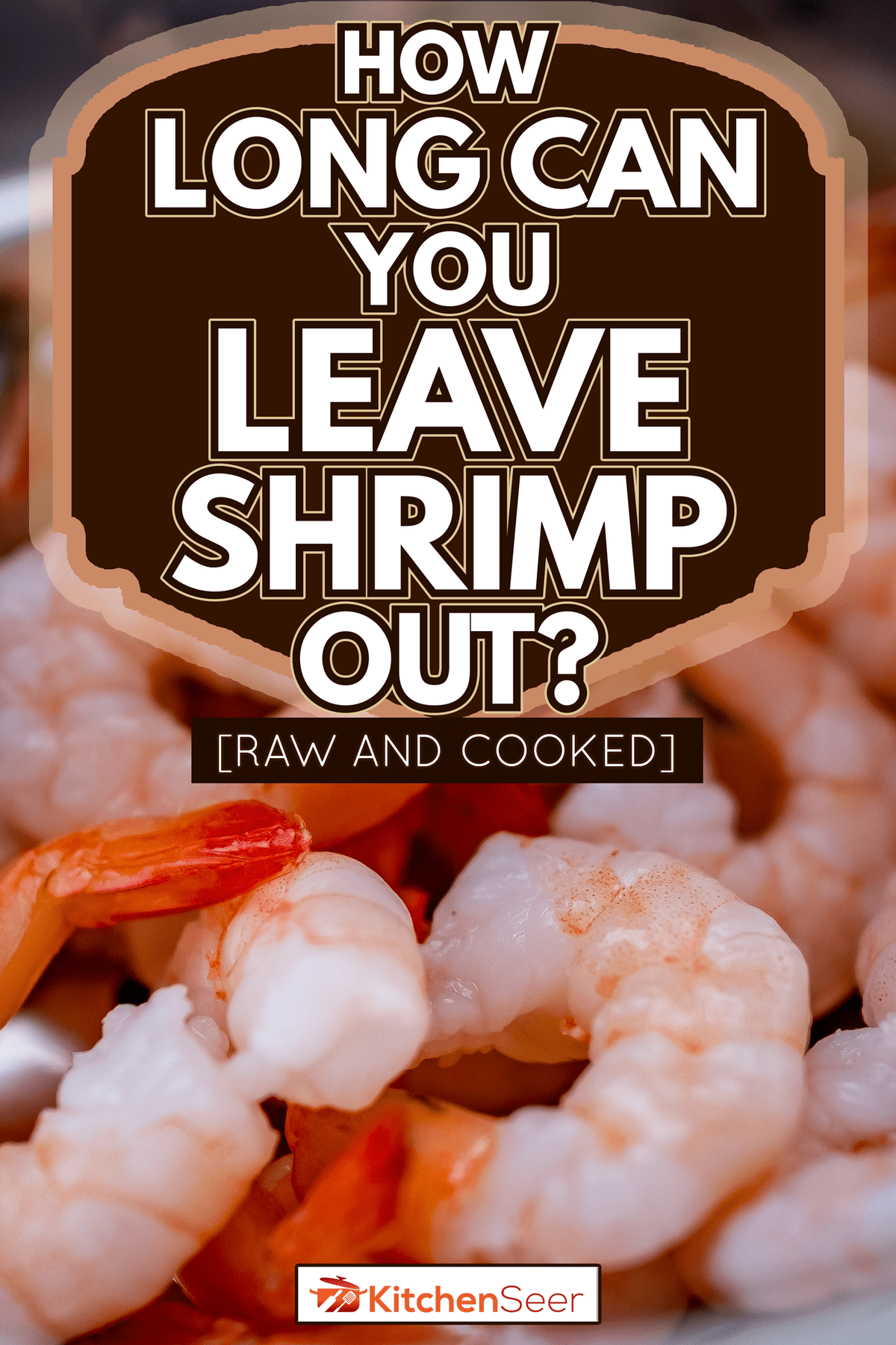 How Long Can You Leave Shrimp Out?

How long you can leave shrimp out before it spoils will be the same whether it is cooked or raw. Bacteria growth determines the length of time shrimp can remain at room temperature.

If enough bacteria grow on your shrimp, they will begin to break it down and release toxins that can be dangerous to consume. There is one factor that affects the growth rate of bacteria more than any other thing, and that is temperature.

If the temperature is beyond a certain threshold, bacteria can multiply rapidly and make the food inedible very quickly. This threshold is called The Danger Zone and is between 40 and 140 degrees Fahrenheit.

At room temperature, bacteria can make food inedible in two hours. If it is warmer, at least 85 degrees Fahrenheit, the bacteria can multiply to dangerous levels in one hour. It would be best to either cook raw shrimp or refrigerate cooked shrimp before it is in The Danger Zone for more than two hours; one if it's warmer than 85 degrees Fahrenheit.

How To Tell If Your Shrimp Is Safe To Eat? 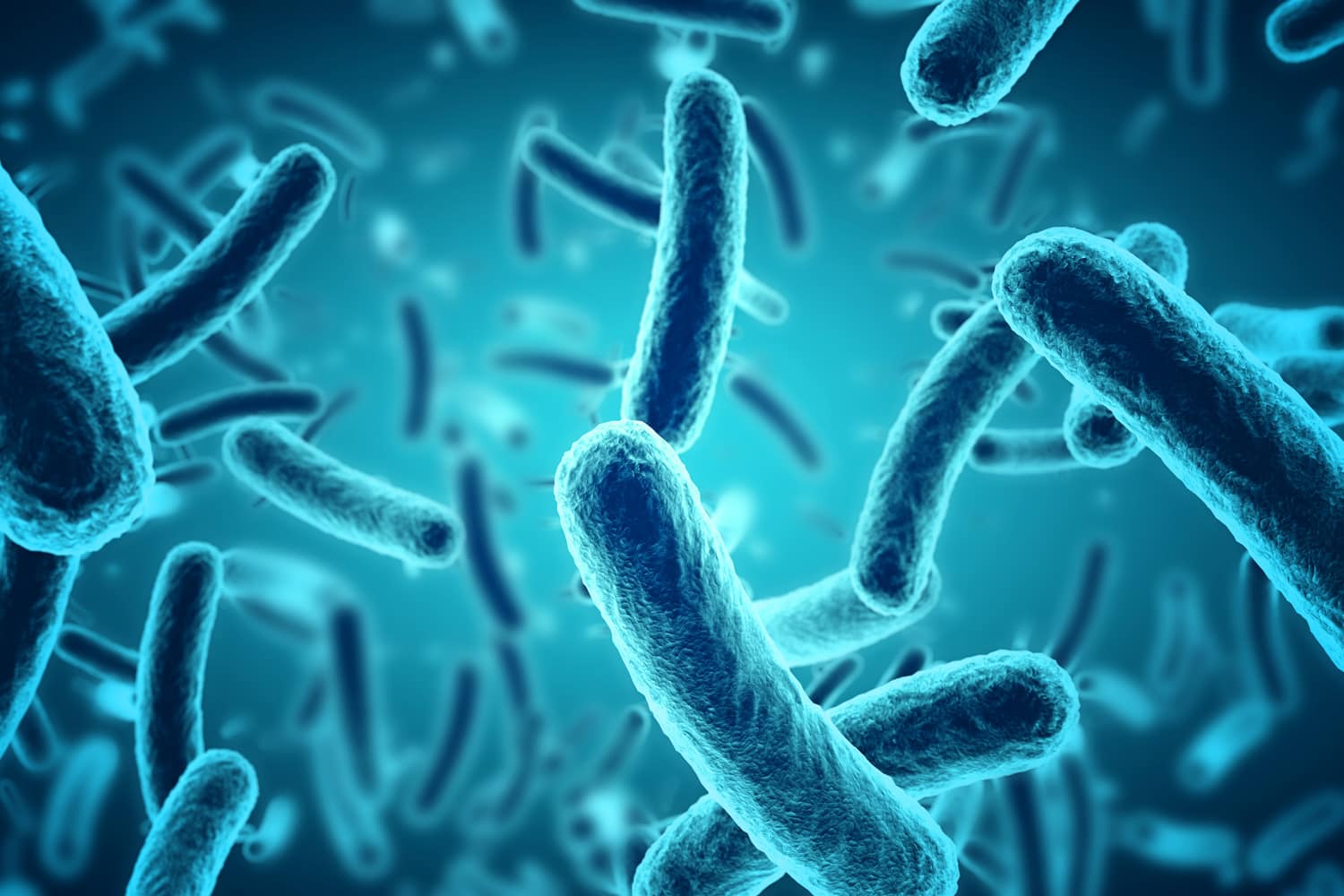 Shrimp will naturally have a seafood smell, but people familiar with shrimp will know the difference between the ocean smell of shrimp and the fishy smell of spoiling seafood.

Shrimp that are starting to rot will have a slimy texture. If your shrimp is sticky or slimy, you should throw them out.

Shrimp should also be firm. If you notice that part of your shrimp is squishy or soft, it may be decaying and dangerous to eat.

Look At Your Shrimp

If your shrimp have any black dots, it could be signs of mold beginning to grow, and you should throw them out. Eating shrimp with mold growing on it can make you very ill or even kill you.

Even if the mold is only on a few shrimp, you will need to throw away all of the shrimp in the bag. Even if you can't see mold on all the shrimp, the fungus can spread through thin mycelium that can be hard to see. On the other side of the bag, shrimp may also be contaminated and make you sick.

If your shrimp passes all of the previous tests, you should still note how it tastes. Your sense of taste is much stronger than your sense of smell and can detect a spoiling shrimp before it even begins to smell.

If you notice a difference in the taste or texture of your shrimp when you are eating it, stop eating and spit out what's in your mouth. These differences can show that bacteria have already contaminated your shrimp and have made it dangerous to eat.

If your shrimp passed the other test and also tastes fine with a firm texture, it is very likely safe to eat. People have the senses we do to identify spoiled food, and nowhere is it more important than identifying spoiled shrimp.

Seafood can make you very sick if eaten once spoiled. If you are unsure about the safety of your shrimp, it is better is throw it out than make yourself sick.

How Long Can You Leave Frozen Shrimp Out?

Frozen shrimp can be left out for a similar time as thawed shrimp, whether it's cooked or not, with one exception; two hours in The Danger Zone doesn't start until the shrimp is thawed.

The timer doesn't start until the shrimp thaws because while the shrimp is frozen, it is no more than 32 degrees Fahrenheit, which is below The Danger Zone. This gives you a little more leeway when leaving frozen shrimp out at room temperature.

What Is The Best Way To Thaw Shrimp?

There are a few ways to thaw shrimp that will give you desirable results, and they all have one thing in common; each method thaws the shrimp slowly. If shrimp thaw too quickly, they begin to fall apart.

Let's look at each way to thaw shrimp and see the advantages and disadvantages of each method.

The best method for keeping shrimp high quality is to let the shrimp thaw in the fridge. This method does keep the shrimp from falling apart but has the drawback of taking 18 to 24 hours to thaw thoroughly.

If you need a quicker method of thawing shrimp, it will come with the consequence of lower quality shrimp.

In Ice Water With A Bag

One faster method to thaw shrimp is putting the shrimp in a bag and submerging it in ice water. You can use either the bag the shrimp came in or a separate plastic bag. You may need to use something to hold the shrimp bag down so that it is fully submerged.

This method will take 45 minutes for the shrimp to thaw and keep the shrimp from breaking apart.

In Ice Water Without A Bag

If you need your shrimp thawed faster, you can take the shrimp out of the bag and place them directly in the ice water. This method will take only 15 minutes but may slightly damage the shrimp.

While the shrimp thaw, you can stir them every few minutes to help them thaw more evenly.

So Which Method Should I Use?

Ultimately it's a trade-off between speed and the quality of your shrimp. If you need to make a meal quickly, you should use a faster method. If you have foreknowledge of the meal, you should put your shrimp in the fridge for the best results.

If you use a water method to thaw your shrimp, use ice water. While tap water is cold, it is often warmer than 40 degrees Fahrenheit, putting your shrimp in The Danger Zone and starting a two-hour countdown to spoiling. Whatever you do, don't thaw your shrimp under running water.

Why Shouldn't I Thaw Shrimp Under Running Water? 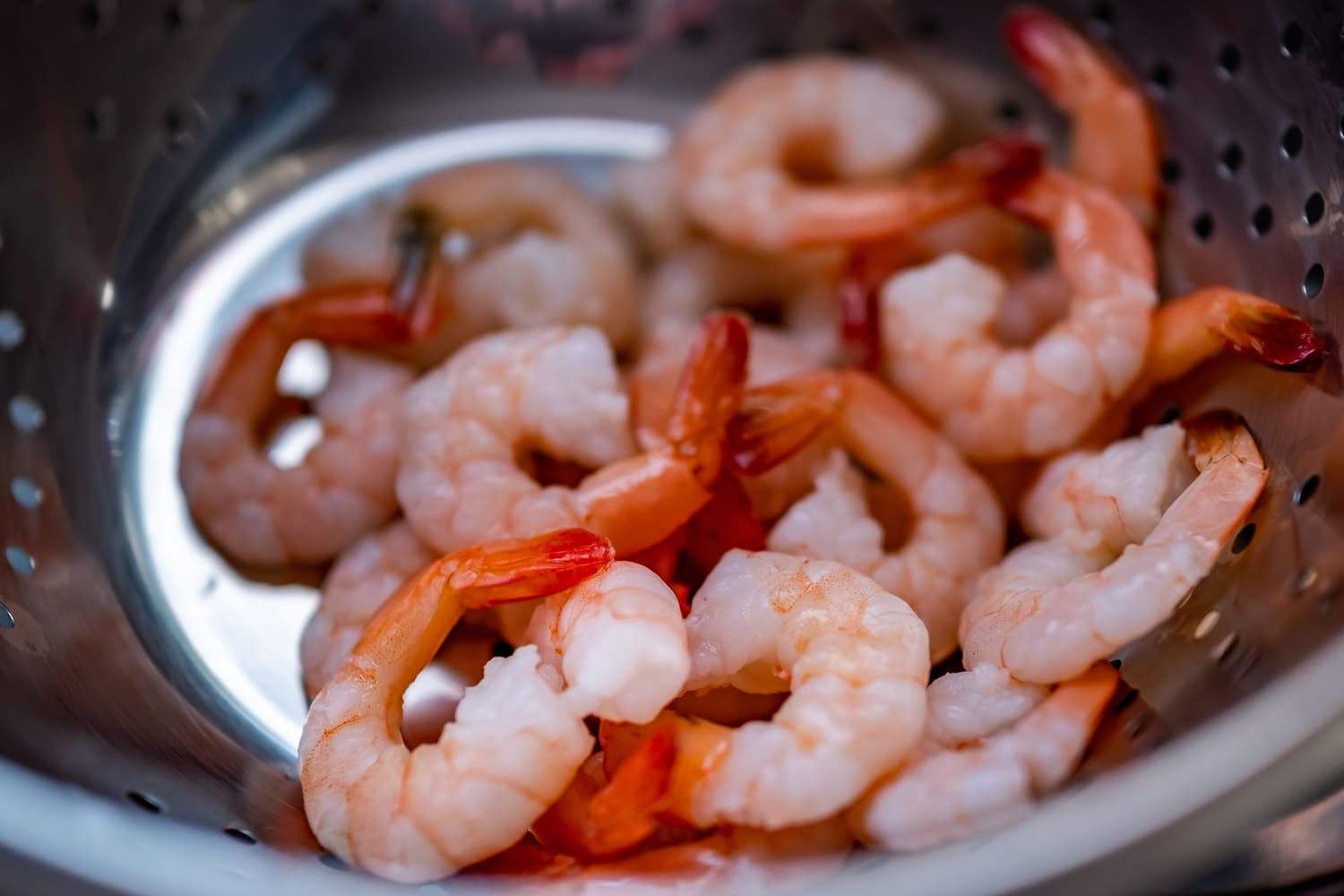 It would be best if you didn't thaw shrimp under running water because it can damage and even ruin your shrimp. Shrimp is a delicate meat and can break apart easily if it is agitated too much. As the shrimp breaks apart, it can become waterlogged.

This will make eating your shrimp a soggy and squishy experience which is not what you want when eating shrimp.

Tap water is often too warm, which can cause your shrimp to start spoiling. In short, semi-cold running water will denature and destroy your shrimp. It can even make you sick if it is thawing above 40 degrees Fahrenheit for too long.

If you need to thaw shrimp quickly, try one of the above ice water methods. 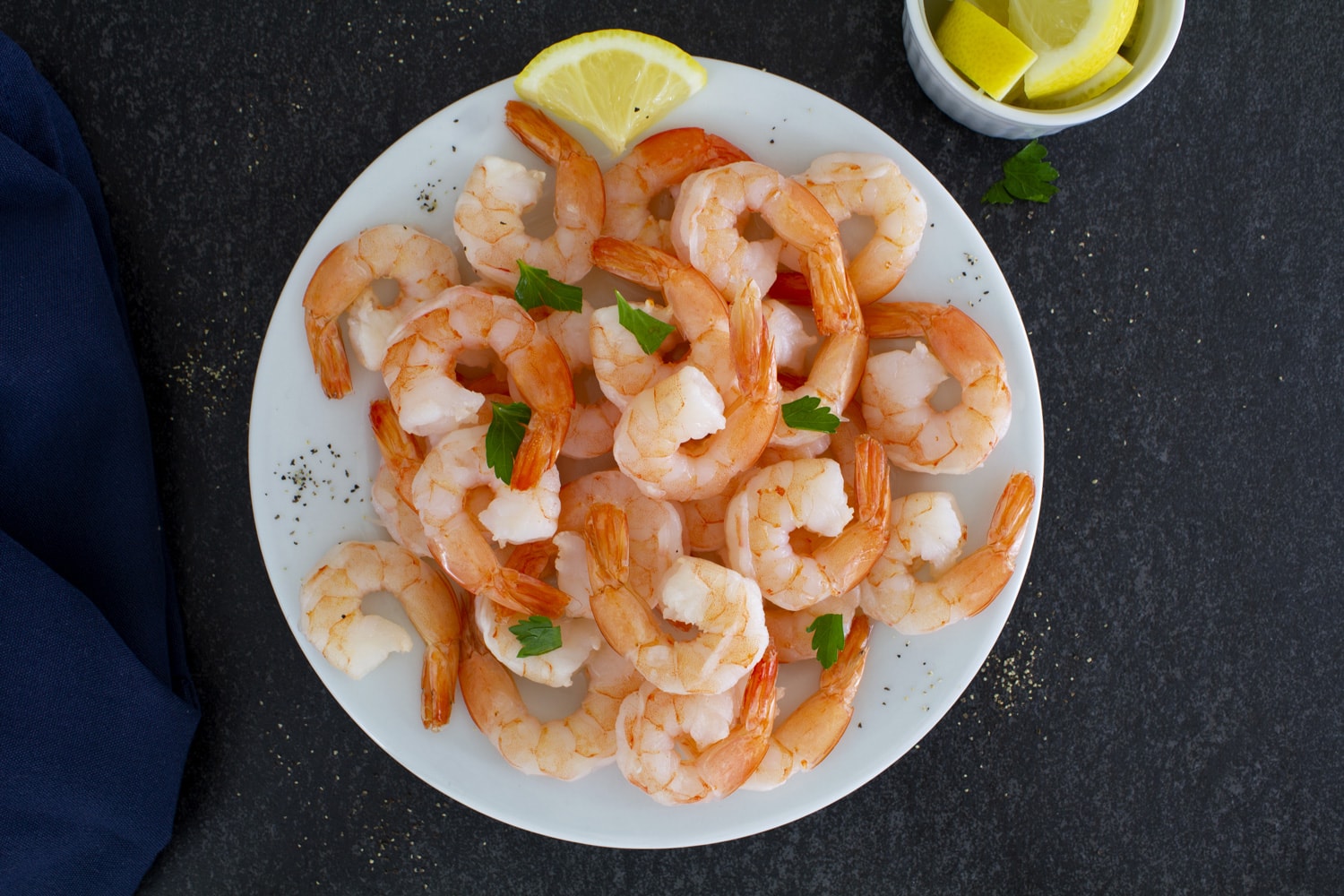 In this article, we learned that you can leave shrimp out for a maximum of two hours before needing to either cook or refrigerate them, providing that it is below 85 degrees Fahrenheit. We also learned that thawing shrimp comes with the trade-off between high-quality and quickly thawed shrimp.

Remember, never thaw shrimp under running water because it can denature and destroy your shrimp.

For How Long Should You Bake Salmon?

How Long Does Dough Last In The Fridge?

Can You Grind Brisket For Hamburger?

At What Temperature Should You Bake Salmon?

How Long Does Cheese Last In The Fridge?