People may not boil milk as much as they boil water, but it's essential to know how to heat this liquid properly. Whether you're making hot cocoa or you want a relaxing cup of warm milk, learning how to boil milk will serve you well in the kitchen. If you've ever wondered how long it will take to boil a pot of milk, you should consider the research we've compiled below.

Typically, it takes between 7 - 12 minutes for a pot of milk to come to a boil. This time may fluctuate depending on your milk's starting temp, the strength of your stove, and how much milk you're boiling.

While 7 - 12 minutes is the average boiling time, many factors influence how fast your milk heats up. Please review the facts below to better determine when your milk is boiled. 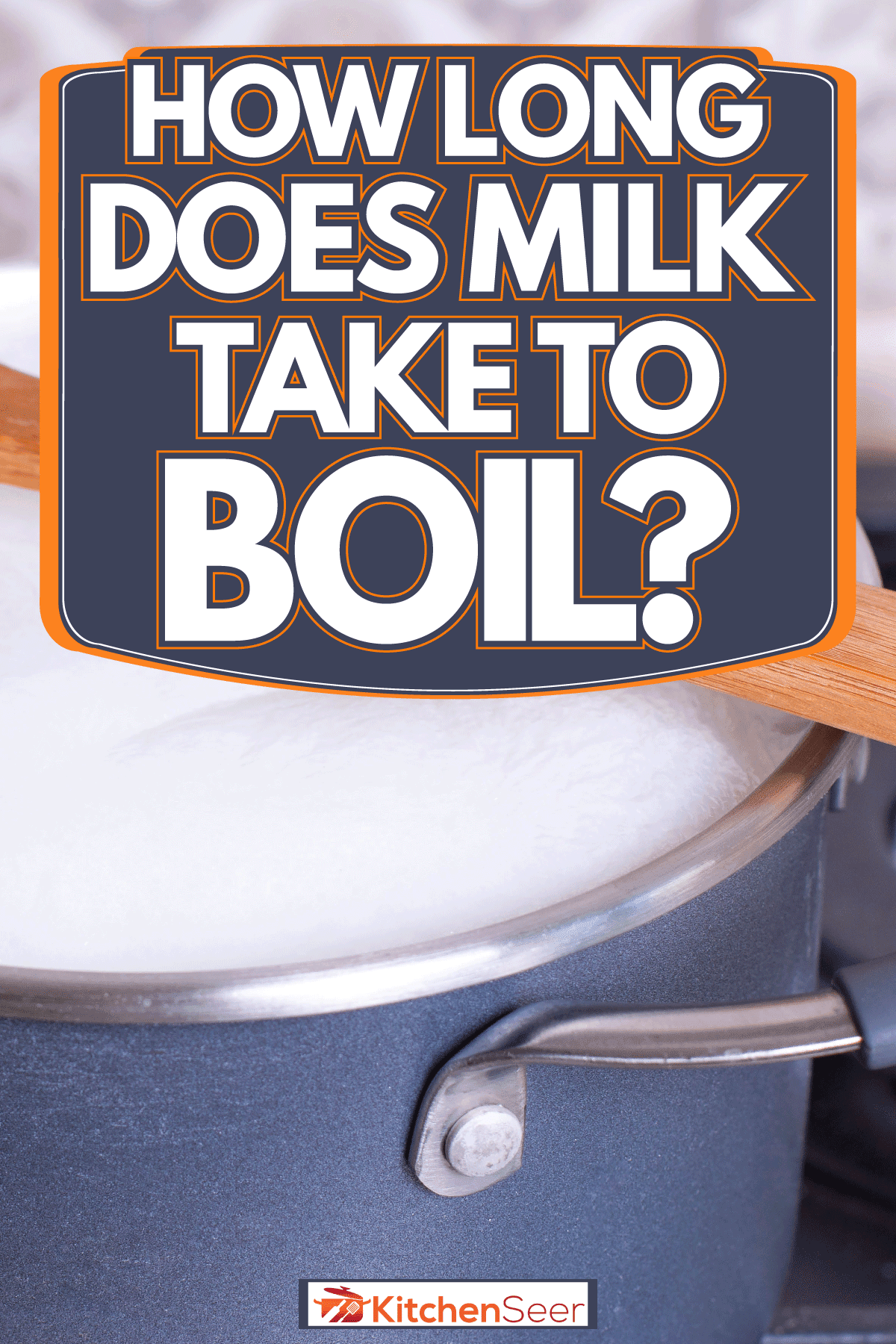 How Long Does It Typically Take To Boil Milk?

In most cases, if you're boiling milk in a pot on a stovetop, it should reach its boiling point in about 7 - 12 minutes. However, many features could affect this average time.

For instance, if you heat cold milk straight out of the fridge, it will take longer to reach the boiling point. By contrast, milk at room temperature should take slightly less time.

You should also consider how much milk you're putting in your pot and what heat setting you're using. If you're using a medium heat setting, it will take longer to boil milk than on medium-high. Also, the more milk you have in your pot, the longer you'll wait.

Since milk can quickly boil over your pot, please stay nearby and monitor your milk before it boils. Never leave your milk on the stovetop unattended because it will probably make a big mess in just a few minutes. 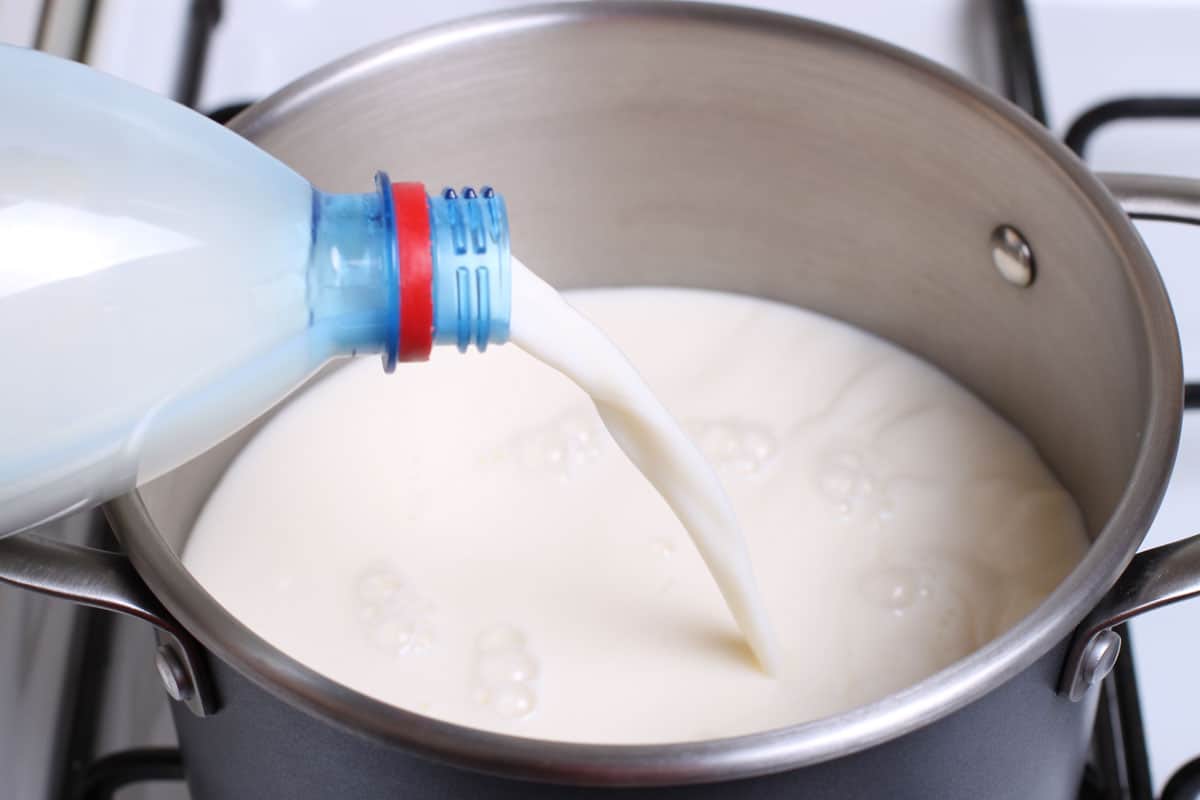 What's The Boiling Point Of Milk?

Milk will reach its boiling point at 212 degrees Fahrenheit. If you want to be precise, you could use a cooking thermometer to check your milk's temp while you're boiling it. However, most people know when the milk reaches this temp because it starts to bubble and steam. 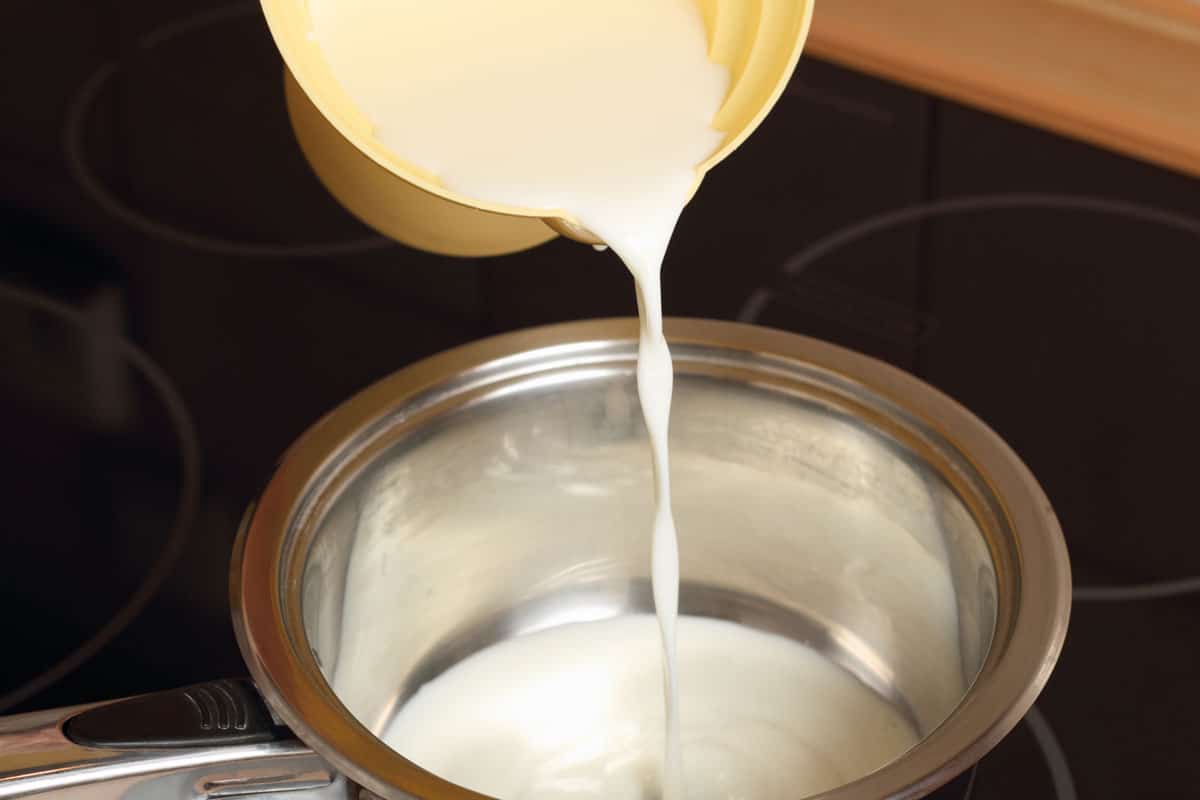 You need patience to cook a perfect pot of boiled milk. While you could put your stovetop on its highest heat setting, the chances you'll end up with a scalded & burnt-tasting pot of milk will significantly increase.

Instead, it's better to put your stovetop on a medium-low or a medium setting and gently stir your milk as it comes to a boil. These simple techniques help evenly distribute heat in your milk.

Also, since a slower heating technique is easier to monitor, it's less likely you'll create any "hot spots" or scald your milk. You should see when bubbles form, which will clue you in on when your milk is at the boiling point.

Once you see these bubbles on the sides of your pot, please turn off your heat and move the pot of milk to an unused burner. Keep stirring the milk for about a minute to ensure it's heated through.

Please check out our guide on the "Best Pots for Boiling Milk" to figure out what equipment you should use.

To find out more about heating milk, please watch this video:

How Do You Know When Boiled Milk Is Done? 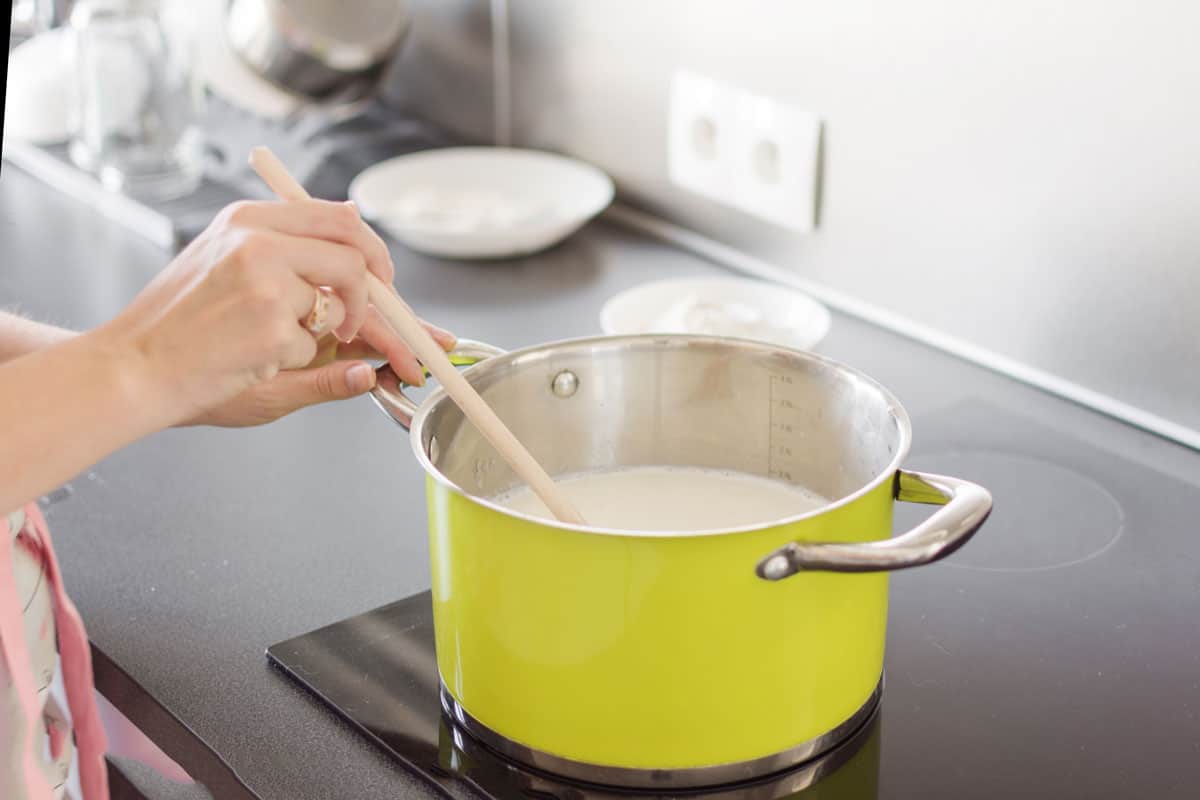 You'll know milk is boiled once bubbles start to appear. You should begin to see these bubbles show up on the sides of your pot when the milk starts to boil.

As the milk boils, you'll also see more steam rising from your pot. These features are clear signs that your milk has reached its boiling point.

Of course, if you want to be super scientific, you could use a thermometer to track your milk's temp. Remember that milk's boiling point is 212 degrees.

Can You Boil Milk Straight From The Refrigerator?

There's nothing wrong with taking your milk straight from the refrigerator and boiling it in a pot. However, since your milk will be pretty chilly, it may take longer to reach the boiling temperature.

What Happens If You Heat Milk For Too Long? 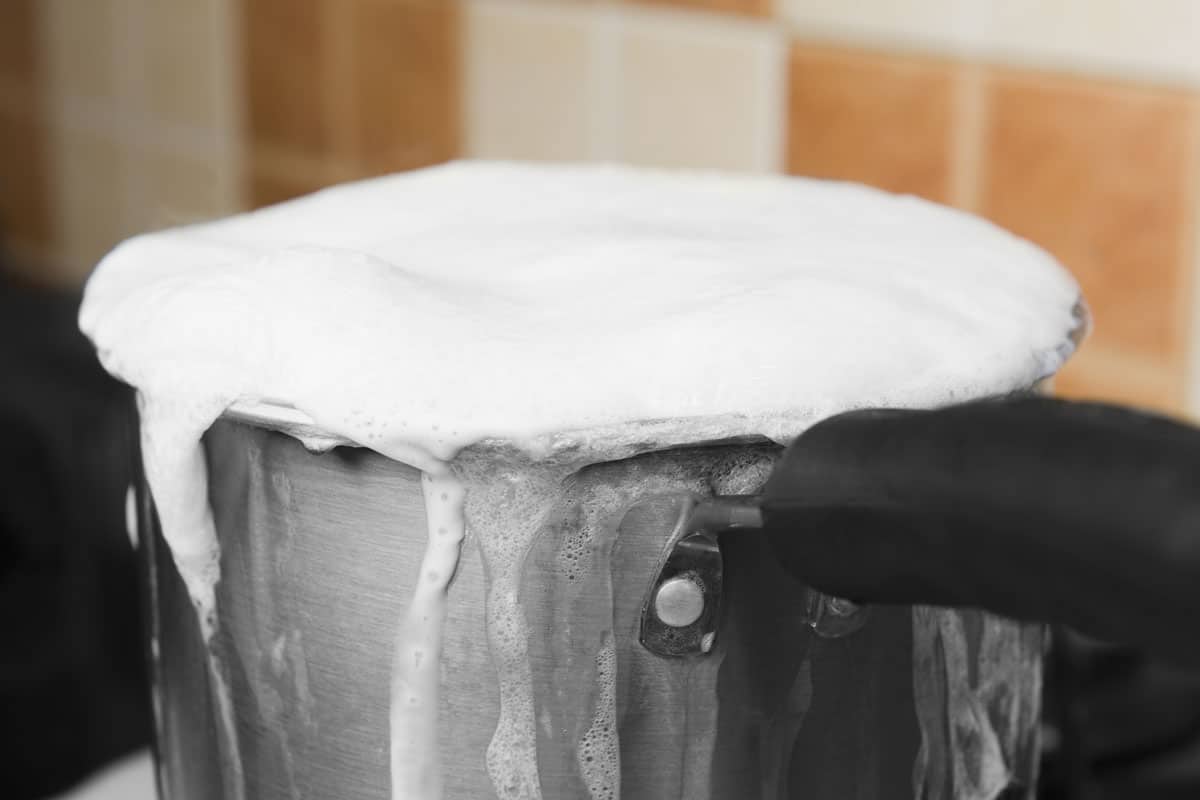 Milk has far more compounds compared with purified water. In addition to water, milk has carbs, fat molecules, and protein. So, when you heat too fast or too long, these particles could easily create scorch marks on your pot.

You'll also notice your milk forming a foamy top layer if you boil for too long. It's very easy for this foam to spill over your pot and make a massive mess on your stovetop.

If you want to see what over-boiled milk looks like, check out this video:

Do You Need To Stir Milk While It's Boiling?

Most chefs recommend stirring milk as you're boiling it. Mixing your milk helps evenly distribute heat and prevents issues like scalding.

Is It OK To Boil Milk In The Microwave? 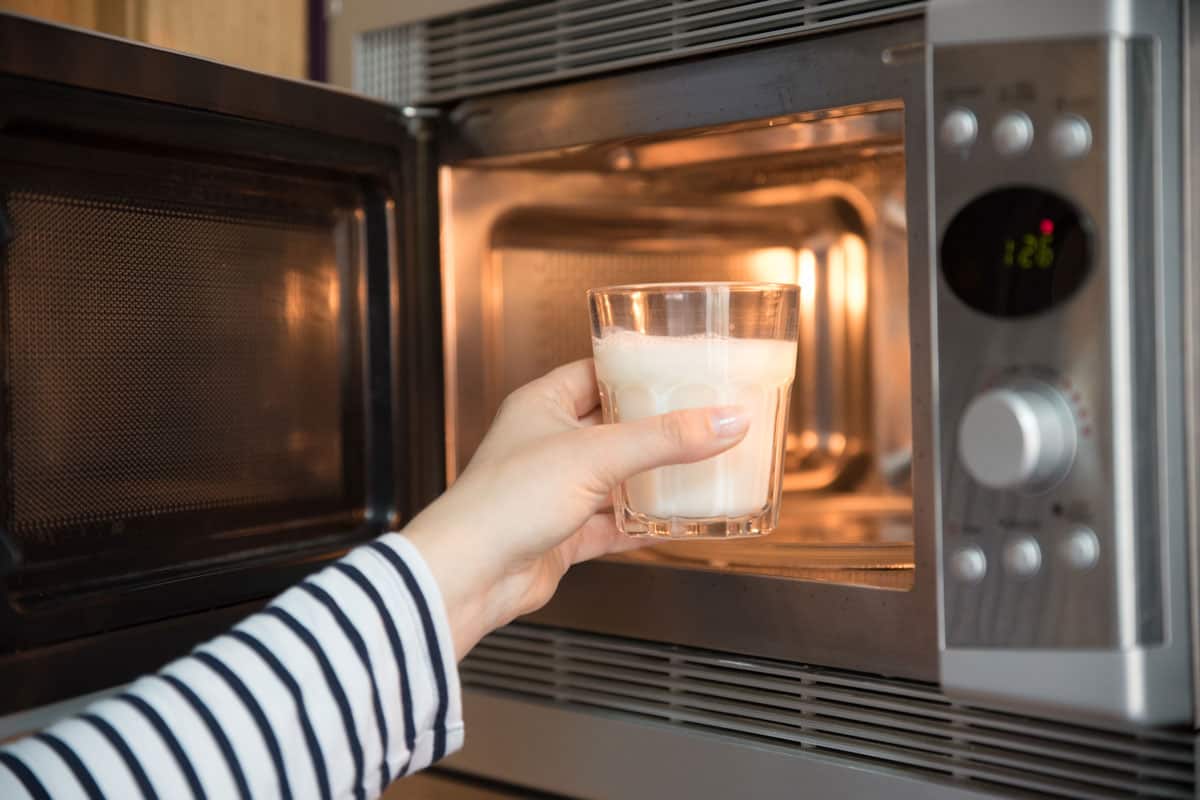 You can boil milk in the microwave, but there are a few techniques to keep in mind. First off, you must use a microwave-safe cup to boil your milk.

Ideally, you should use a clear measuring container like a Pyrex glass to heat your milk in the microwave. Since you can see through Pyrex, it's easier to monitor your milk while it's heating.

Once you have your container, you must microwave your milk in short intervals. Microwaving doesn't take as long as boiling on medium on the stovetop. Therefore, it's far easier to scald milk if you're not careful.

Put your milk in the microwave and heat for about 30 seconds. Take your milk out and stir for a few seconds with a spoon. You could keep microwaving the milk in 10 - 15 second intervals until you start to see bubbles and steam.

If you need more advice on this topic, please read our previous guide, "How To Heat Milk In The Microwave." 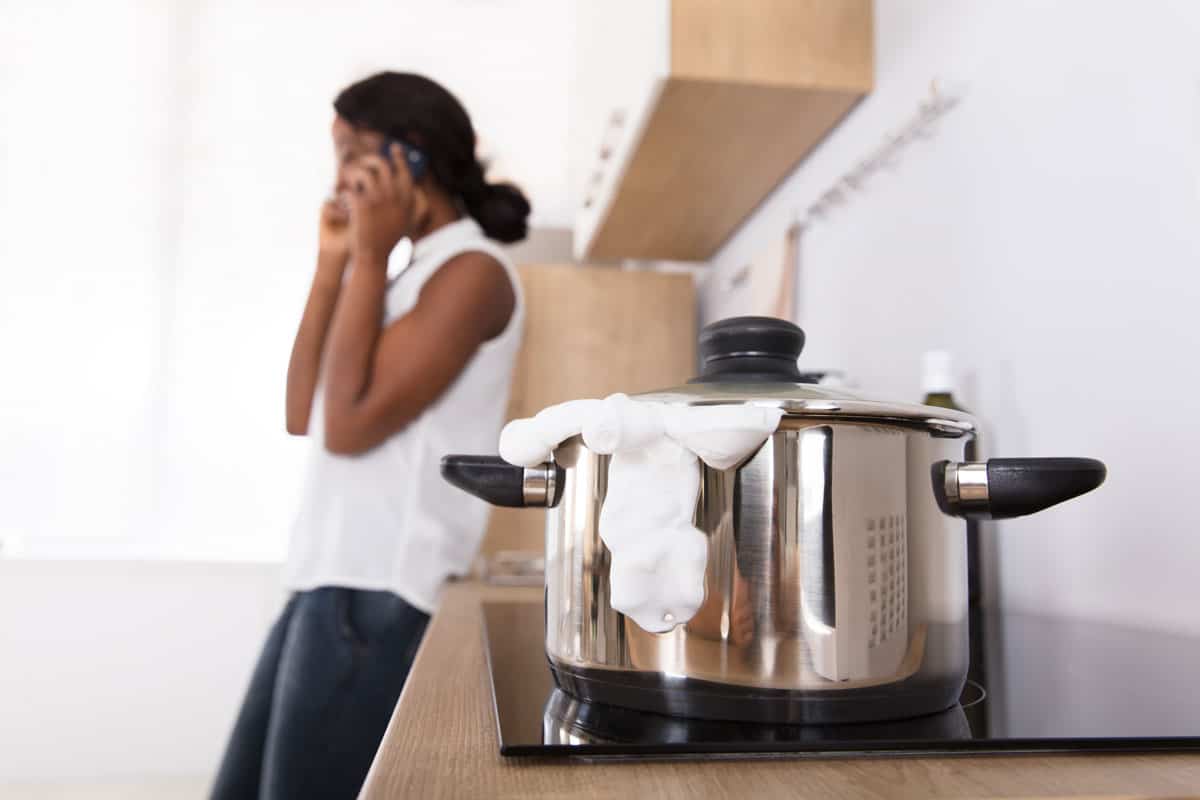 Can You Boil Alternative Non-Dairy Milks? 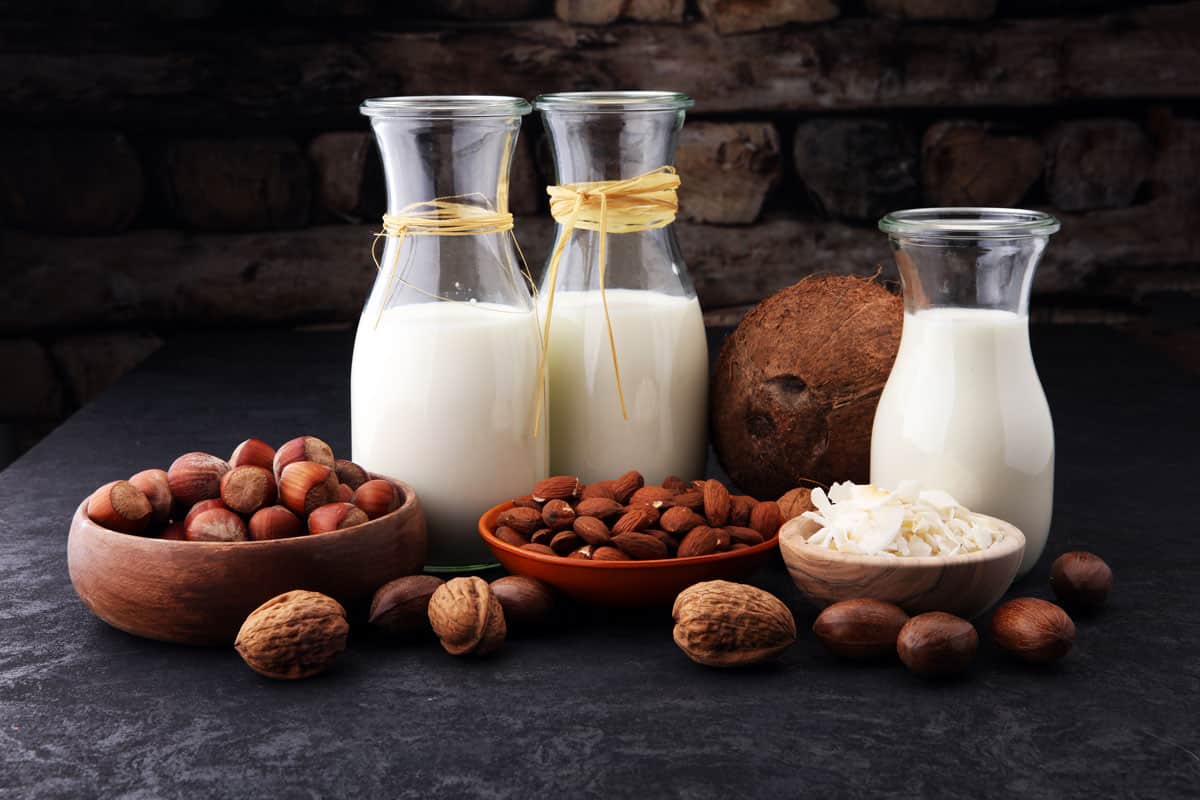 If you like non-dairy milks, like almond, oat, or coconut, you can bring them to a boil as you would regular milk. As long as you stand nearby and use medium-low heat, there's nothing wrong with boiling non-dairy milks.

How Long Does It Take To Boil Non-Dairy Milks?

Like regular milk, it takes about 7 - 12 minutes to bring non-dairy milk to a boil on the stovetop. Please stay close to your pot of milk as you heat it. If you leave a pot of milk unattended, it could easily scorch, curdle, or bubble over.

Will Boiling Milk Get Rid Of Bad Bacteria? 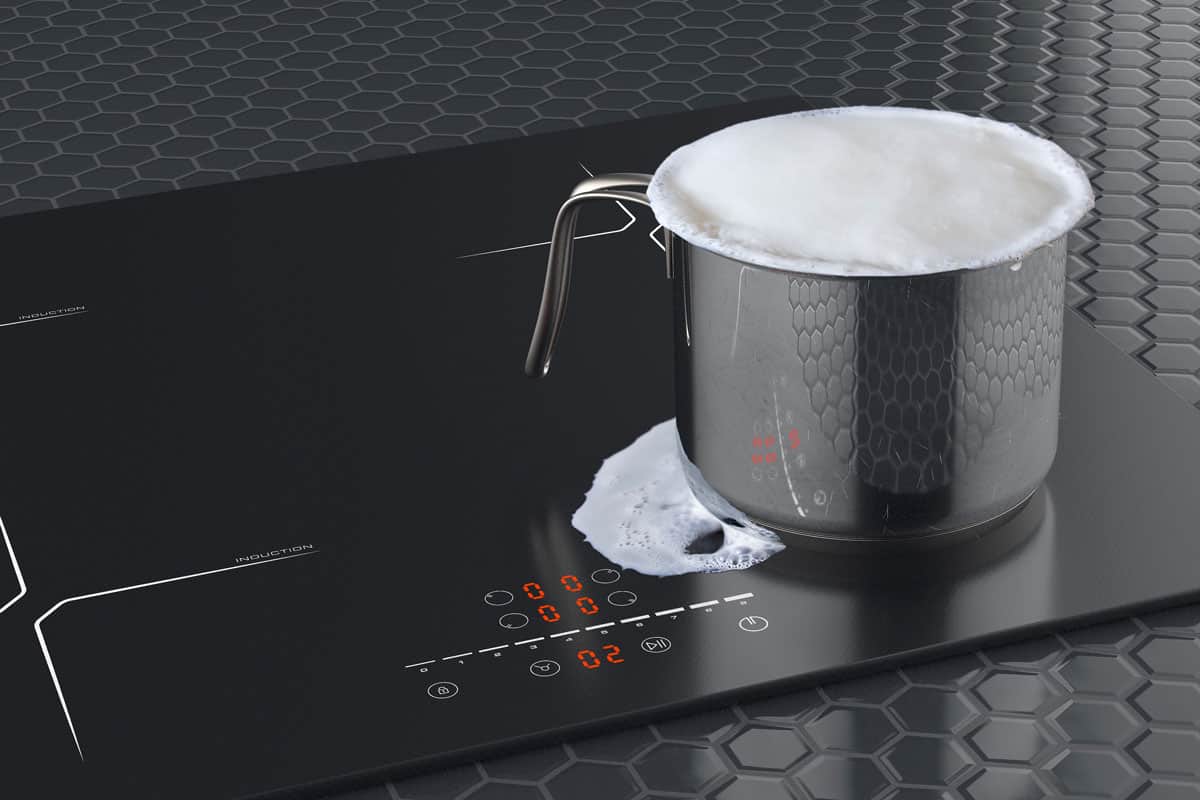 You can get rid of harmful bacteria by boiling milk. However, most of the milk on today's market is already pasteurized. If this is the case with your milk brand, it's unnecessary to boil your milk to eliminate unsafe microorganisms.

However, many health experts recommend boiling it before drinking it if you're consuming raw milk. Unpasteurized milk has a higher risk of containing pathogens, so boiling helps remove these impurities.

Is Boiling Milk The Same As Pasteurization?

Although pasteurization involves heating milk, it's not the same as boiling. Pasteurization refers to bringing milk to a temperature below the boiling point to get rid of bacteria.

In the USA, pasteurized milk has to maintain a temperature of 160 degrees for long enough to kill the harmful bacteria. F

Does Boiling Milk Get Rid Of Nutrients? 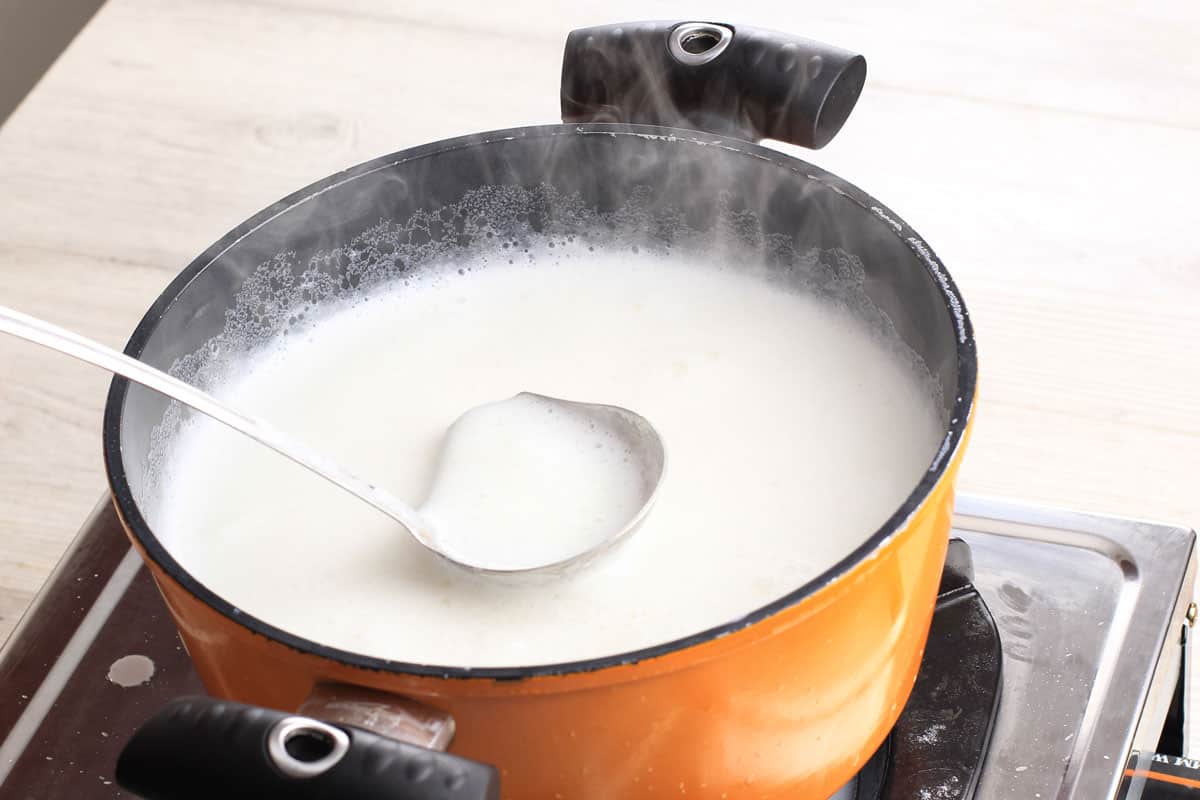 You will change many aspects of its chemical structure when you boil milk. For instance, most studies suggest boiled milk will have significantly fewer B vitamins versus raw or pasteurized milk.

By most metrics, boiled milk is "less nutritious" than pasteurized milk. However, some preliminary trials suggest boiling milk could make it easier to digest for people with allergies or milk sensitivity.

If you have concerns about how boiled milk will affect your diet, you should speak with a certified nutritionist.

Only Boil Milk In A "Watched Pot!" 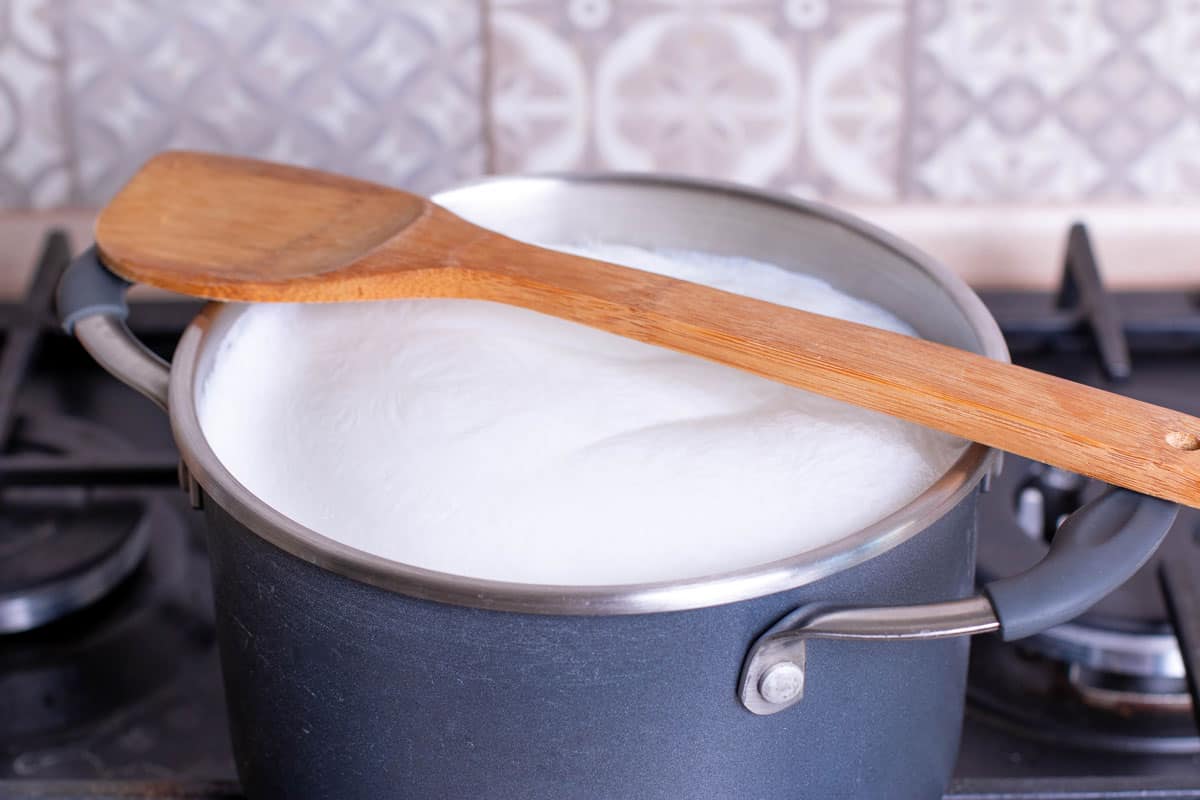 You probably know the saying, "A watched pot never boils." In the case of milk, you should watch your pot carefully; otherwise, it will boil over in a few minutes!

Usually, chefs say milk reaches its boil temp in about 7 - 12 minutes over the medium heat setting. Please stay near your milk when boiling it to decrease the risk of scalding and splatter. Walking away could result in a significant mess or a "burnt" milk taste.

How Long To Bake Lasagna

How Long Do Olives Last In The Fridge?

How To Properly Store A Mousse Cake Overnight