Getting to know the food and drinks in your fridge can feel like an endless task. Are you new to drinking almond milk and have no idea whether it's safe to leave it out of the refrigerator overnight? Will it spoil? Luckily, we've done extensive research into this topic and have the answers below. Let's check them out!

Even though almond milk isn't dairy, you still shouldn't leave it out of the fridge for long periods. Generally, opened almond milk can be outside the refrigerator for about two hours before you need to throw it away.

However, if your almond milk is unopened and in a shelf-stable package, you should be fine to leave it unchilled until you open it/are instructed to on the label.

As we begin, we will cover all things almond milk and discuss how to keep it from spoiling. Whether you have too many cartons or don't have room in the refrigerator, we're here to help. With that said, let's dive right into this post! 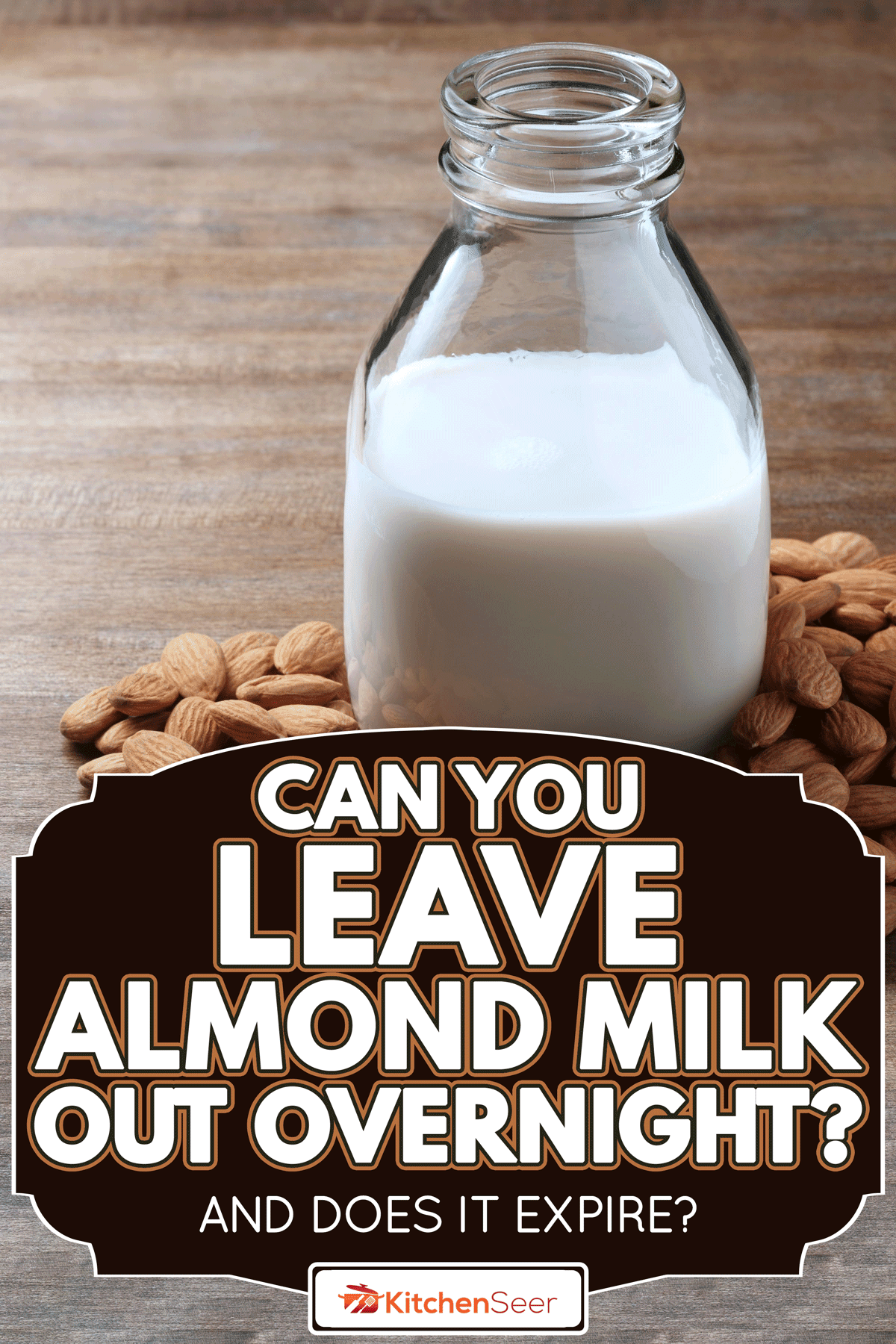 Does Almond Milk Go Bad If Left Out?

Yes, almond milk will spoil if you leave it out for too long. Generally, leaving an opened carton of almond milk outside the refrigerator for more than two hours can be harmful.

This is because almond milk, although non-dairy, still needs to be at a certain temperature. Of course, this applies mainly to opened containers, but it is important.

When almond milk sits out at room temperature, bacteria can start to form and produce toxins. That can be problematic for you, as these things will make you sick.

Even if your milk doesn't smell sour, it can still be dangerous to consume. So if you accidentally leave yours out for more than two hours, it's safer to pour it into the sink.

What If I Leave Unopened Almond Milk Out?

Depending on whether your almond milk is perishable or shelf-stable, it's still possible for it to spoil. For example, according to Almond Breeze's website, their refrigerated almond milk will spoil if you leave them out overnight.

On the other hand, the brand's shelf-stable products are safe to be left out or stored in a pantry. Furthermore, they recommend using your milk, regardless of formula, by its “Best Before” or “Best if Used By” label.

So even if your almond milk doesn't need to be refrigerated, you still need to drink it by a specific time.

Does Almond Milk Have Dairy?

No, almond milk does not contain any dairy. One of the main benefits of this type of milk alternative is that it isn't produced by cows, won't have cholesterol, and is entirely plant-based.

Almond milk also doesn't have lactose, which makes it a perfect choice for those with lactose intolerance. These things tend to trick people into thinking almond milk doesn't need to go into the fridge, but it still does.

As we said, harmful bacteria can form and produce toxins inside a container of almond milk, so that's something to keep in mind.

What Are The Health Benefits Of Drinking Almond Milk?

For those new to the non-dairy life, it's always good to know what exactly almond does for you. A few notable benefits associated with drinking almond milk include:

Again, these are just a few of the many benefits of drinking almond milk. Even if you aren't vegan, cutting down on processed foods like milk can help you live a longer, healthier life.

Furthermore, almond milk is packed with vitamins D and E, which are great for you.

What Temperature Does Almond Milk Spoil? 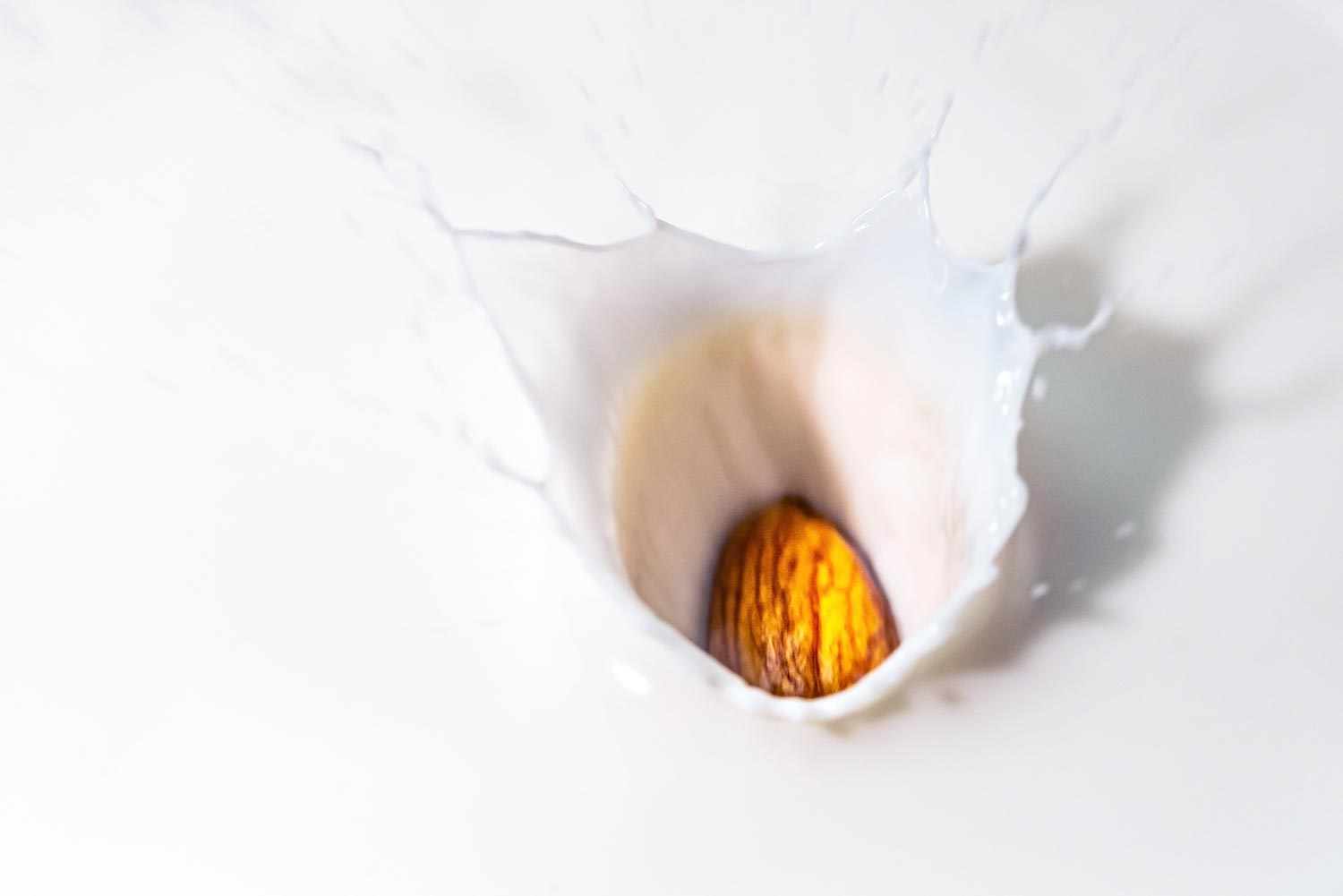 Like most refrigerated food, almond milk will spoil if it isn't kept at 40 degrees Fahrenheit. However, if your almond milk is shelf-stable, it shouldn't spoil as long as it is at room temperature.

Generally, most people keep their refrigerator between 30 and 40 degrees, so that is perfect for almond milk. As we said, it's best to keep your milk in the fridge as much as possible, as you would do for dairy.

It is a good habit to put your almond milk away whenever you are done with it, as this prevents spoiling from happening. Even if your kitchen feels cold, it's not going to be 40 degrees (even in the winter).

Commercial almond milk goes through a process of ultra-pasteurization. That means the milk is heated to reach nearly 280 degrees Fahrenheit and then cooled quickly.

Can You Leave Almond Milk In A Hot Car?

If you are running errands and need to leave your almond milk in a hot car, make it quick. Typically, polyunsaturated fats will go bad fast in the heat. Luckily, almond milk is mainly monounsaturated, meaning it won't sour as quickly.

With that said, we don't recommend going into a store for an hour with your milk in the trunk, as this can lead to spoiling. Again, although almond milk isn't dairy, try to treat it the same way.

How Do I Know If My Almond Milk Is Shelf-Stable?

For those wondering whether their almond milk needs to be refrigerated or not, check its label. Usually, shelf-stable almond milk will say "Best By" on the top or side.

This label will also mention whether it needs to go into the refrigerator or not. If your almond milk is perishable, it will most likely have a "Use By" date, which indicates it will spoil.

Another easy clue is whether your almond milk is in a fridge at the grocery. If you have to grab it from a cold space, it needs to be refrigerated. The same goes for shelf-stable options, as they will be sitting in the open air without any cooling.

How Long Does Almond Milk Last? 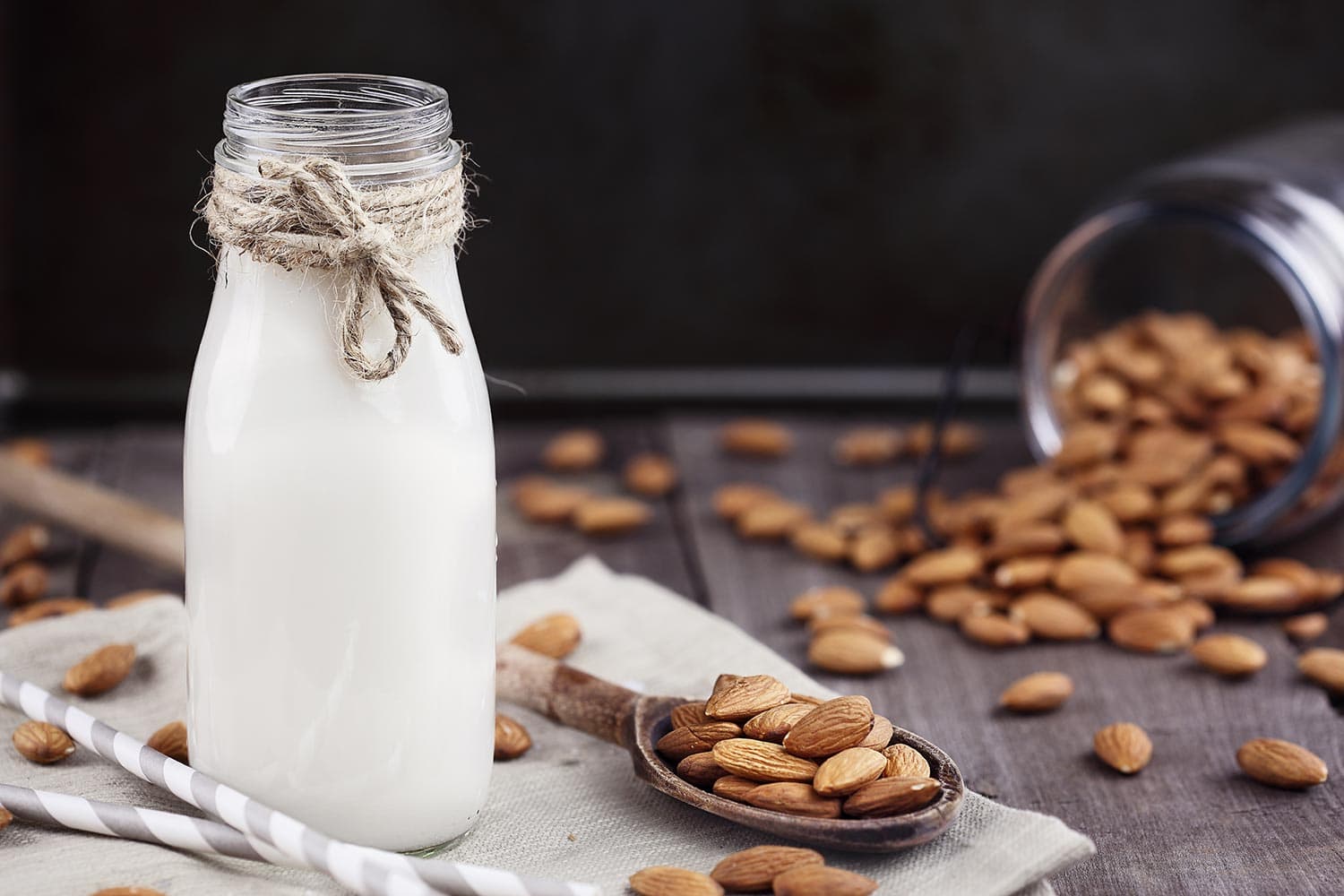 You also want to make sure you place your milk somewhere so that it won't experience a fluctuation in temperature. For example, the fridge door can be problematic as it is the warmest part of your appliance.

For this reason, we recommend keeping almond milk on the top shelf of your refrigerator towards the back. However, regardless of where you put your milk, it won't last forever.

Ideally, you want to drink almond milk within a week, so try not to over-purchase it.

Between soy and almond milk, you can expect them to last around the same time. Generally, the first thing to do is ask yourself which type of almond or soy milk you want: shelf-stable or perishable.

Next, it's important to store the two accordingly. As we mentioned, almond milk lasts about ten days in the fridge once you open it, and soy will be around the same.

Furthermore, shelf-stable non-dairy milk (soy, almond, oat) will typically last about 30 days if you keep them at or below room temperature. Remember, storage can impact the lifespan of your milk, regardless of its formula.

So this isn't a battle of shelf life but instead of taste and consistency preference.

Is Drinking Almond Milk Worth It? 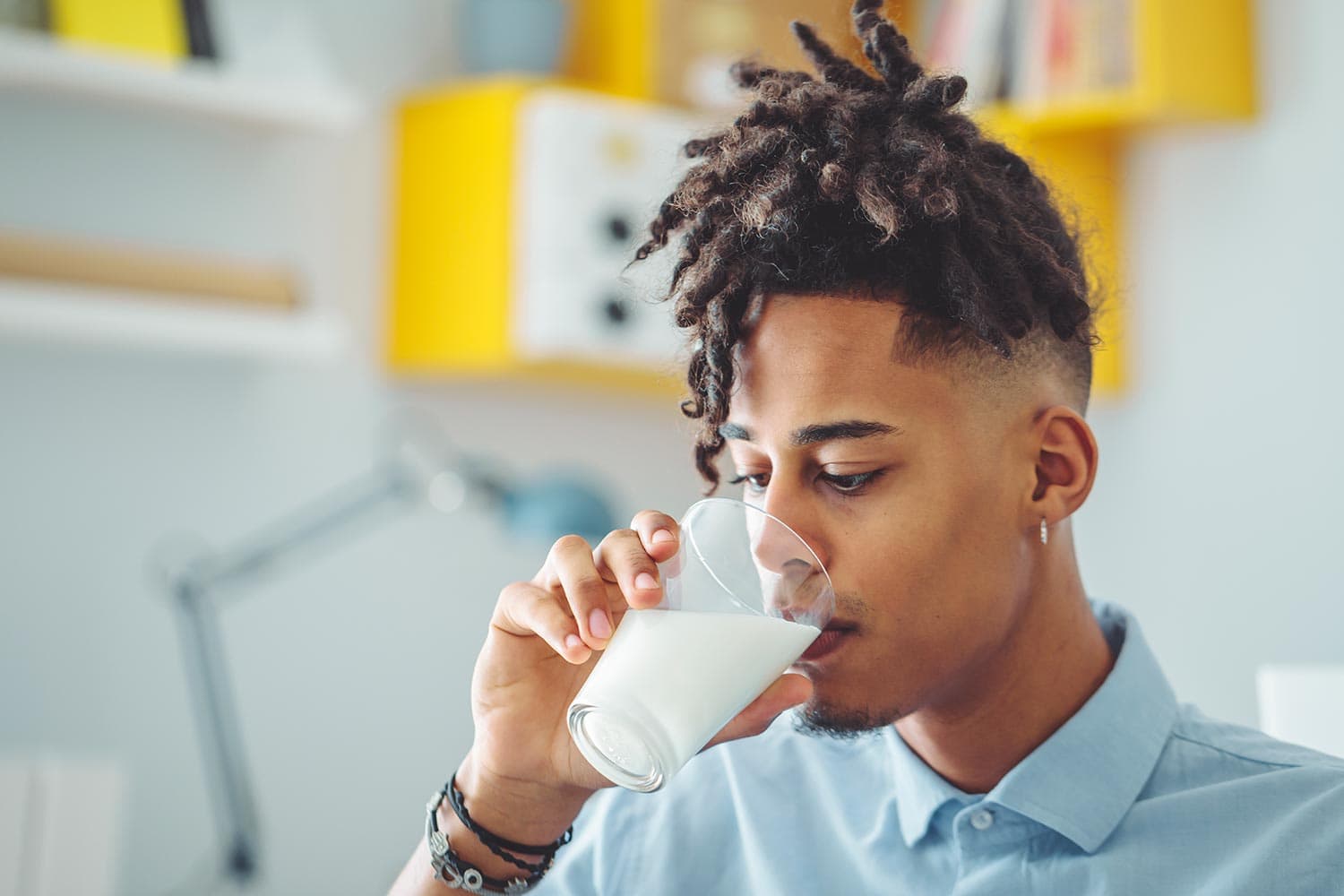 Overall, drinking almond milk is worth it. Considering the endless health benefits this non-dairy alternative offers, it's hard not to love it.

As we mentioned above, almond milk is rich in vitamins and fat, which promote a healthy heart. Additionally, switching from regular dairy to a plant-based alternative means consuming fewer preservatives.

On top of that, the dairy industry is known for being abusive to animals, so you could be saving a life by boycotting it entirely. Remember, change can happen with one small action done by many.

According to the Physicians Committee for Responsible Medicine, switching to almond/non-dairy milk can also cut your chances of developing breast, ovarian, and prostate cancers, so it could save your life too.

To Tie Everything Together

Whether you're switching to a cleaner, greener diet or don't want to drink dairy anymore, knowing the shelf life of almond milk can be helpful. You shouldn't leave almond milk out overnight or for more than two hours, from what we found.

Doing this can result in spoiling and bacteria forming inside your milk container. Instead, keep your milk cold whenever you aren't using it to keep you safe.

Furthermore, you also want to check whether your milk is shelf-stable (it doesn't need to be refrigerated), which in that case, you can store it in the pantry. Now, let's drink some almond milk!

What Is The Best Container To Store Milk?

Almond Butter Not Getting Creamy - What To Do?

Does Almond Butter Need To Be Refrigerated? [Before And After Opening]

How To Proof Pizza Dough