Quiche is a delicious and classic dish that is suitable for any occasion. It's also a versatile dish that can have many different things in it. There are only a few primary ingredients that you are supposed to have to call your dish quiche. So what happens if you don't have one of the core ingredients, such as milk? Is there anything you can use instead of it? We have looked into everything about quiches so that you can make the best one possible with the supplies you have on hand!

There is a variety of options that you can substitute for milk in your quiche recipe. Based on the substitute you choose, you may need to water it down to make its consistency similar to that of milk. Here is a list of different choices that you can use instead of milk:

While you can add a lot of different things to change the flavor of your quiche, you generally need an ingredient like milk. This ingredient helps to bind it all together and fluff up the eggs. It does add some taste to the quiche but it is most importantly there to solidify the texture of the dish and how it all comes together. Aside from simply picking one of the choices above, it's important to know how and why that substitute works. Make sure to keep reading below to help you choose the best milk substitute for you!

Some substitutes on the list may be obvious, and others may have you scratching your head. It's an important lesson in cooking to learn that while milk is a great ingredient, it can be replaced. Let's take a look at each milk substitute in detail.

Heavy cream is number one on the list because it's just a richer version of milk. Also, many quiche recipes call for heavy cream already, so adding a little more in instead of milk may just make it better! Since heavy cream is richer than milk, you may want to cut it with a little water. Try around 75% cream and 25% water to get the right consistency. You can play around with those percentages until you get a consistency that you like and it will do the trick nicely.

Click here to shop for heavy cream on Amazon.

Half and half is another great substitute that you're likely to find in your fridge when the milk runs out. This possible substitute is already closer to the consistency of milk than heavy cream. Since it's generally equal parts milk and heavy cream, it doesn't need to be mixed with water or anything. If using half and half instead of milk changes the recipe at all, it will just make it a little creamier.

Shop for half and half on Amazon here.

Sour cream might be a little less obvious of a choice than some of the other dairy choices on the list. This additive is usually seen as a topping and not an ingredient. While it is clearly thicker than milk, sour cream can add the same qualities to a dish as milk. You may just want to use less of it than you would milk considering how thick it is. It will also likely make your dish tangier. In quiche that added flavor may just be a great thing.

Look here to shop for sour cream on Amazon.

Another less-thought-about substitute is plain yogurt. Plain yogurt has some of the same qualities as sour cream except it's a bit thinner and a bit less tangy. Since it's thinner, you can try to add it into your recipe in the same measurements that you would milk. It may still add some tanginess to your quiche, just not quite as much as sour cream would. You can also use plain greek yogurt, but make sure you water it down a little since it's thicker.

Click here to shop for plain yogurt on Amazon.

The first of the non-dairy substitutes for milk is almond milk. Almond milk is very a very popular substitute for milk with vegans and lactose-intolerant individuals. It has a similar consistency to milk so you can add it to recipes the same that you would milk. The only thing to think about is that it may add a slightly sweet and nutty taste to your dish.

Shop for almond milk on Amazon.

Next up on the non-dairy list is coconut milk. This is also a very popular substitute for milk that can be used in really any dish. You can add it into quiche the same as you would milk or almond milk. It may also add a slightly nutty taste to your quiche. However, it does tend to be a bit creamier than almond milk, so that's something to think about when choosing between the two.

Click here to shop for coconut milk on Amazon.

Oat milk is quickly becoming the most popular choice for non-dairy users. It does not have some of the negative qualities associated with almond and coconut milk like their slightly more watery consistency or nutty flavors. Oat milk has a very similar structure to milk so it behaves very similarly in baking and cooking. Swapping out milk for oat milk works very well in most cooking situations.

Check out oat milk on Amazon.

Possibly the oldest and closest non-dairy option to milk is soy milk. People have been using soy milk instead of milk for years now with no complaints. Like oat milk, it doesn't have some of the negative attributes as the other non-dairy kinds of milk. Also, like oat milk, you can add soy milk into your quiche the same as you would milk and have a great end product. Just make sure you get unsweetened soy milk. You may not like the result of accidentally adding vanilla soy milk to your quiche!

Click here to shop for unsweetened soy milk on Amazon. 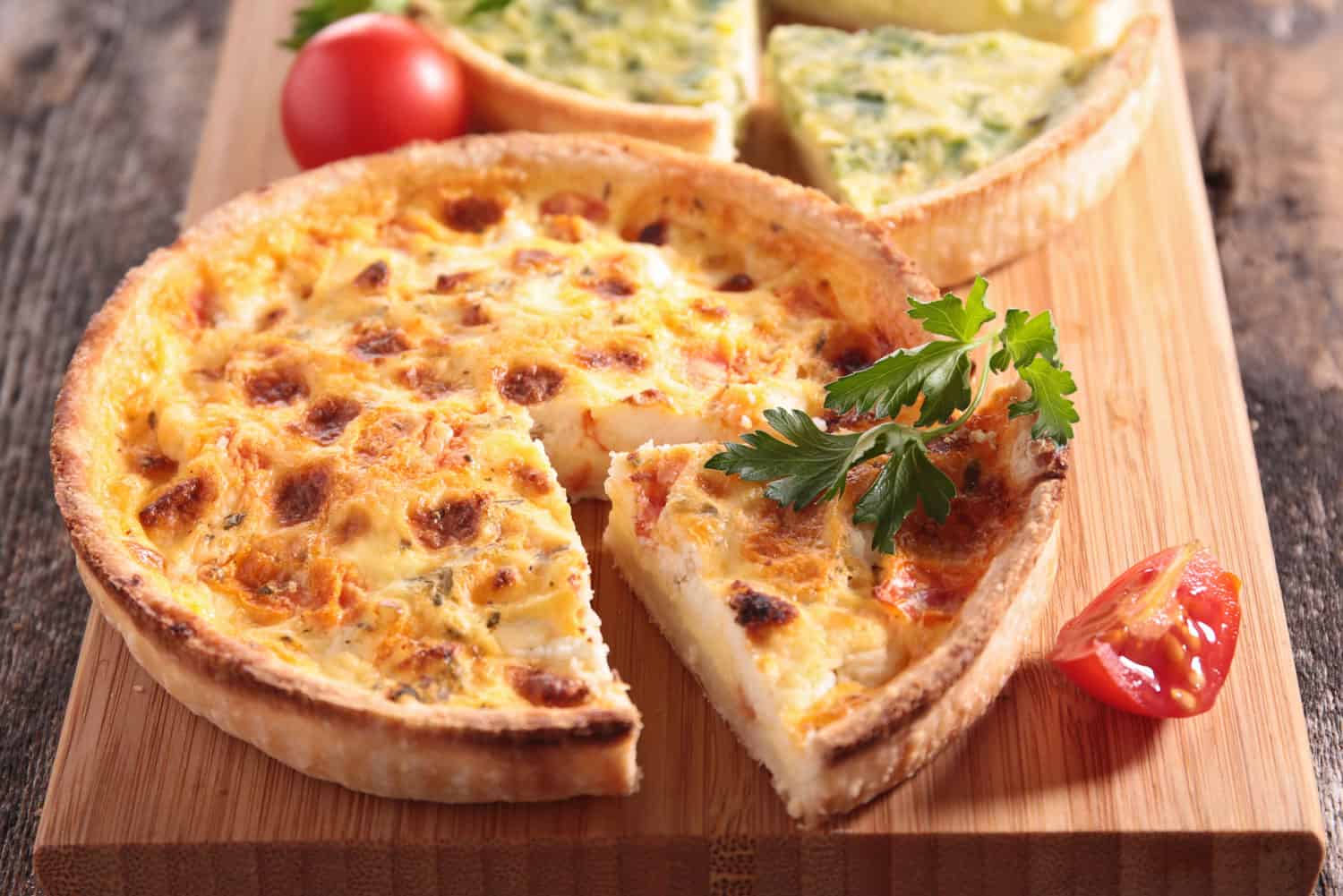 Adding in the milk, or milk substitute, to quiche, is only one part of it. What happens when the quiche as a whole doesn't turn out as expected? Is there a way to make this fantastic egg dish without one or more of the primary ingredients? There are more things to think about with your quiche that goes beyond the milk.

Can You Make Quiche Without Milk?

There are ways to make a quiche that doesn't involve milk. Some recipes don't have anything in the place of the milk but instead, use things like oil. You could also just add more of another ingredient instead of milk. For example, if your recipe also calls for heavy cream, you could use more of that instead of the heavy cream and the milk.

In a pinch, you can also make a quiche with water if you really need to add something to it to help thin out and combine all of the ingredients.

Can I Substitute Almond Milk For Milk In Quiche?

How Do You Fix A Watery Quiche?

There are a couple of commonly used methods to fix this problem. The simplest is to simply keep cooking your quiche. If it is watery and the crust isn't overdone, then put it back in the oven. Check it every few minutes until it's cooked perfectly.

The other method focuses on fixing a watery quiche if the crust is already done and in danger of burning. You will need either a bain-marie or a large pan that your quiche's dish can fit in. Set your quiche in the larger dish and fill that dish with boiling water about halfway. Now you can put it back in the oven; the moisture from that boiling water will stop the crust from cooking more while the filling finishes cooking.

Can I Use Ham In My Quiche?

You can use a wide variety of ingredients in your quiche, including ham. The best way to prepare it for the dish would be to cube it and possibly pre-cook it before putting it in the quiche. With ham or any meat, you will want to make sure that it's not too wet when placed in the quiche. That could throw off the mix and affect how it bakes. 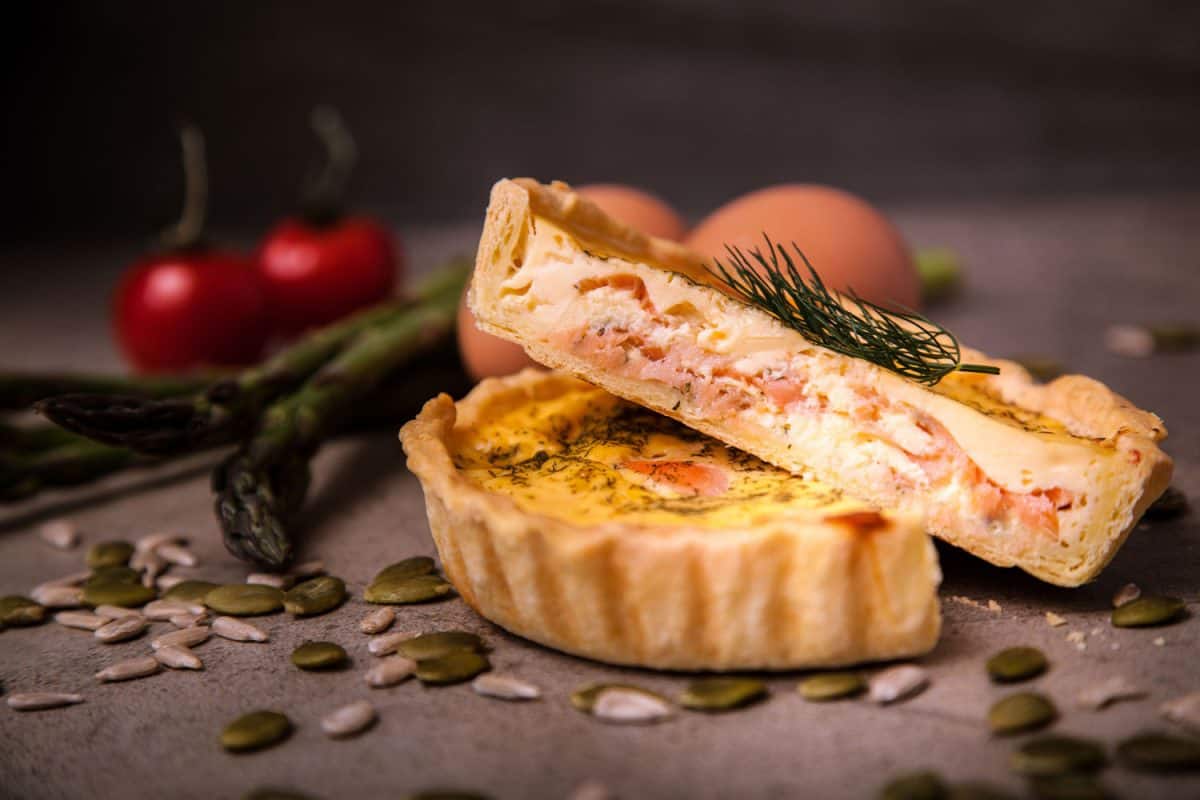 When it comes to adding milk to your quiche there are quite a few options. Instead of panicking when you realize you're out of milk look in the fridge., chances are that you have something that can work in its place. From a different dairy option to many different non-dairy options, you probably have something that will do the trick. Just make sure to adjust the measurements depending on the substitute so that your quiche still comes out delicious and baked perfectly!

To learn more about milk in your kitchen click on the links below:

What Type of Pot is Best for Boiling Milk?

How To Brine Cucumbers For Pickles In 6 Easy Steps