In some situations, your stove can be a limiting factor in the choices of tools you can use around the kitchen. More specifically, if you own an induction cooktop, you might not be able to use some types of pots. This situation can be worrying if you plan on using a pressure cooker. Can it work on induction? Let's find out!

If you'd like your pressure cooker to work on an induction cooktop, you'll need to make sure the material is compatible. Materials like stainless steel, cast iron, and enameled cast iron should function on induction. Glass, aluminum, and copper will not work.

Accordingly, if your pressure cooker is stainless steel, it should work. If the body is aluminum, it won't.

So, why do certain materials work on induction stovetops? Why are others unable to heat up? If you'd like to learn the science behind induction stovetops, we'll have to cover more details. We cover these topics and more further ahead. 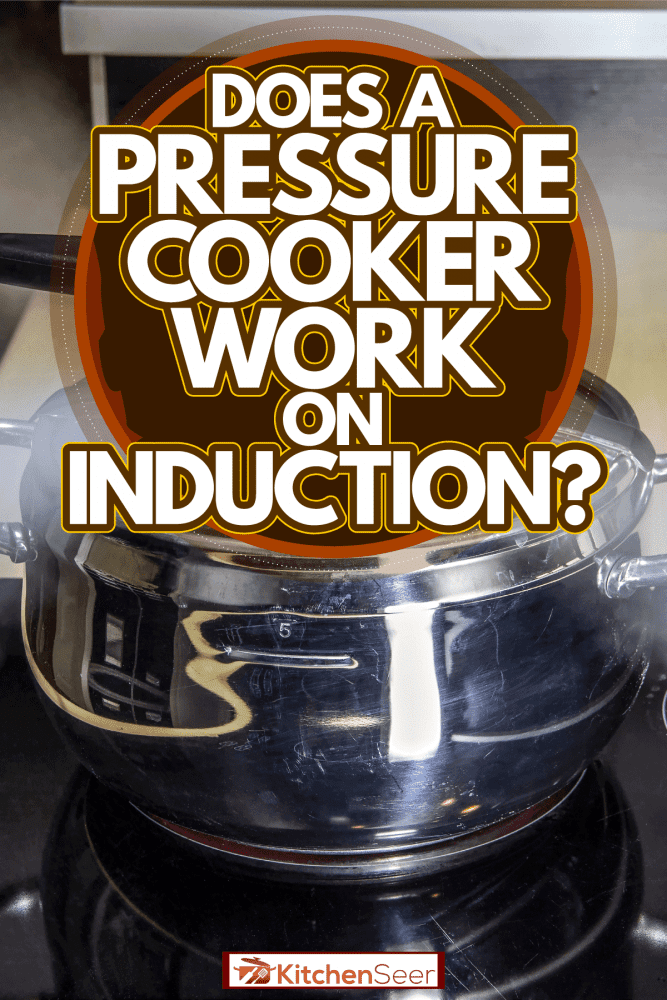 Before getting into your specific situation, we need to learn how an induction cooktop works. You might have already tried to use a pressure cooker on induction. The results may vary depending on the material of the pot.

But, in most cases, the pressure cooker didn't build up to pressure. It might not even heat up at all! Why is that?

The answer to that question would depend on how an induction stovetop operates.

There are three stove options - gas, electric, and induction. Gas stoves use flames as the heat source. Electric burners work by letting electricity run through coils. This process heats the metal, turning them a bright orange color. 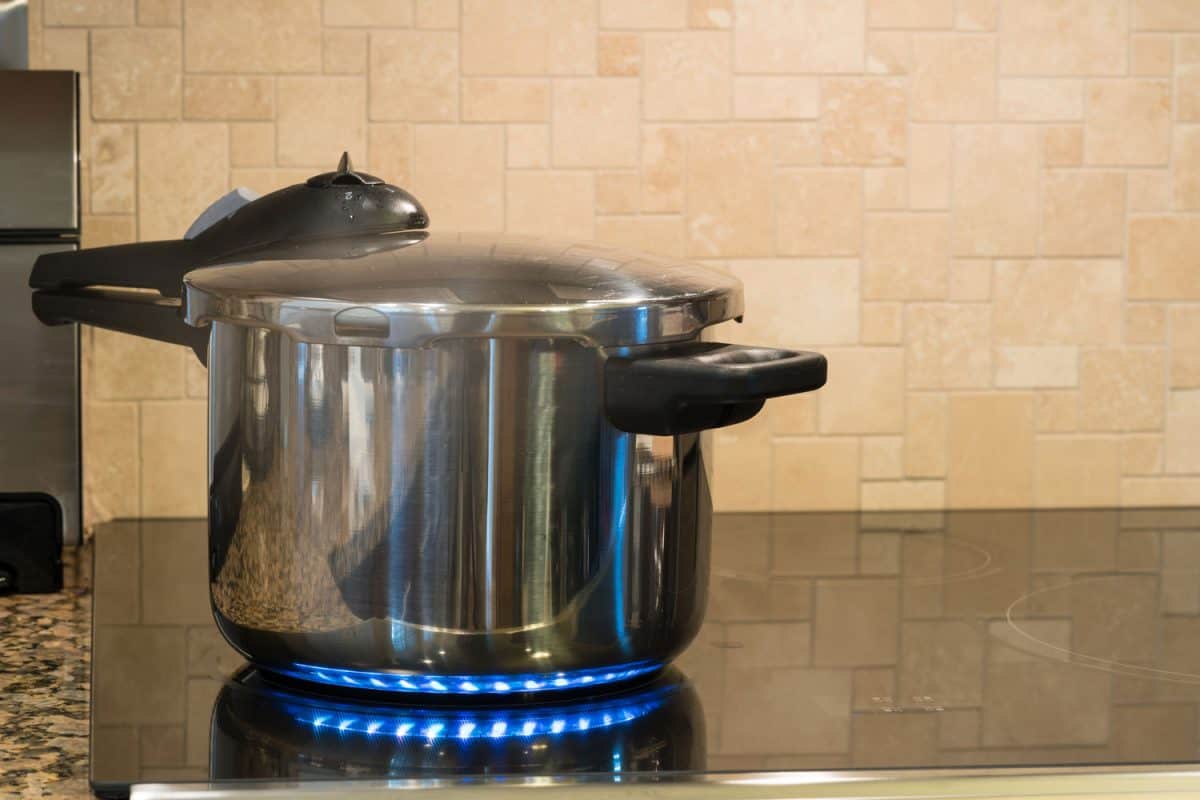 Induction stovetops heat a cooking pan or pot by electric induction. So, the pan - or pot - you will be using needs to contain ferromagnetic metal. In other words, the body of the pressure cooker needs to be magnetic. The base must also be flat.

It begs the question, why does the body need to be magnetic? Of course, it needs to be magnetic to work on an induction cooktop. But, what is the scientific reasoning behind that?

Behind the glass top of the stove is an electronically controlled coil of metal. It works similarly to an electric stove. A current will flow through the metal coil.

In simple terms, induction stovetops generate a constantly changing magnetic field using an alternating current. The magnetic field penetrates the metal of the pan to heat it directly. For this reason, you're likely to find that the stovetop doesn't burn when you place your hand on it.

The stovetop will be hot to the touch only when you've recently used a metal pot over it. Regardless, the magnetic field moves around the metal base of the pot. This process will make an electric current flow through it too.

It swirls around the structure and dissipates its energy. Thus, we get a hot pot that heats our food.

Which Type of Pressure Cooker Is Best for Induction?

So, now we know that only certain materials can work on an induction stovetop. More specifically, ferromagnetic metal like stainless steel and cast iron. If you want to guarantee a pressure cooker will work on induction, you'll need one that has a stainless steel body.

As some suggest, the base of a pressure cooker can be stainless steel or aluminum. The cheaper ones you find will most likely have an aluminum base. If you've opted to go for one of the expensive ones, it will have a stainless steel base.

Some of you may have had a pressure cooker passed down from your family. Or, maybe you've purchased one at an antique shop. Regardless of where you got it, the problem now is determining the material of the base.

If it sticks, your pressure cooker will work on induction.

Tips On Using Pressure Cookers With An Induction Stovetop 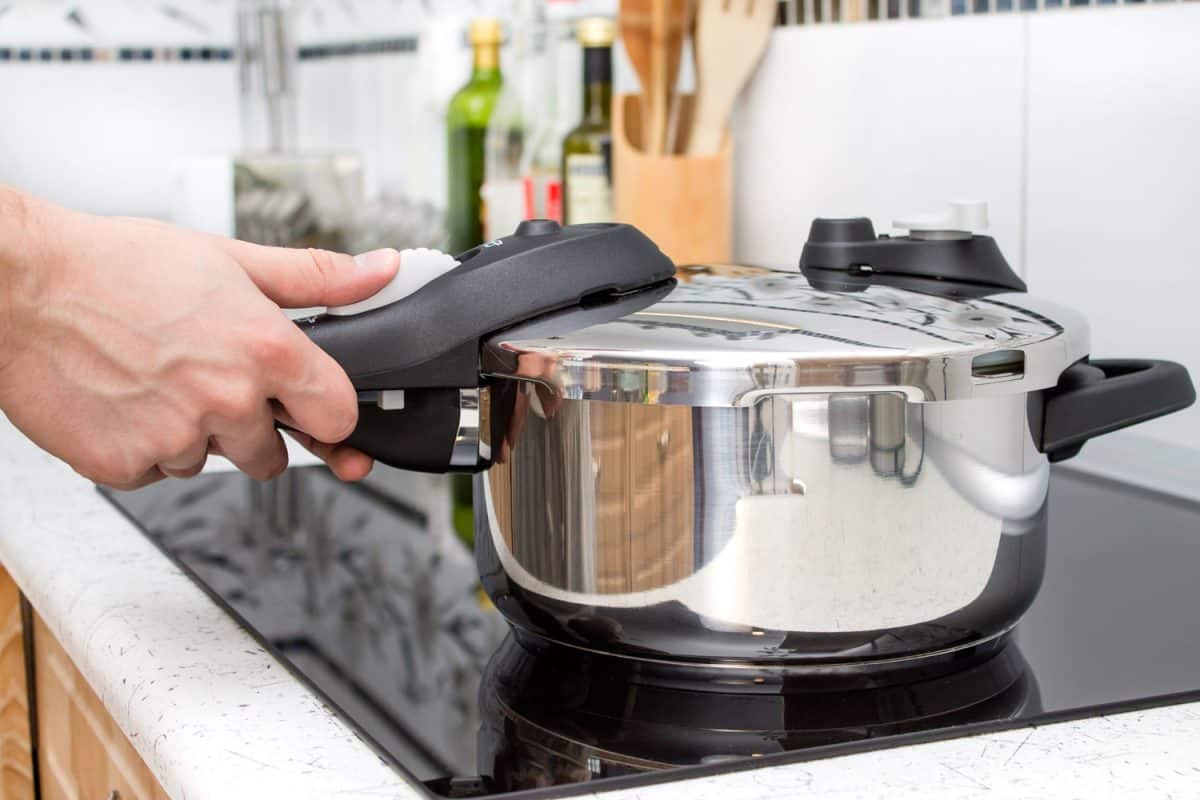 As mentioned, cooking through induction means you're going to be heating the pot directly. Some suggest that this would transfer 90% of the stove's energy to the pot. In comparison, a gas burner would only do 47%.

So, what does this mean for meal preparations? It means food and water will heat up 50% faster. We'll have to accommodate this efficiency by making a few tweaks to the cooking process.

We'll go over some of the mistakes you might make when dealing with a pressure cooker on an induction stove.

Since cooking through induction can heat the pot faster than other methods, it wouldn't be necessary for you to preheat the pressure cooker.

If we put this in perspective, a gas stove uses flames to heat the pot. It's relatively quick. But, it will take a bit of time to heat it, depending on the material.

Electric stoves will need to heat the burner with electricity. Then, the burner will heat the pot. For this reason, preheating is a viable method for these types of stoves.

An induction stove transfers energy to the pot directly. So, you might burn the food inside while you're preparing other ingredients.

Bringing the Cooker Up To Pressure

Generally, stainless steel pots take some time to heat up. For this reason, you'll always see recipes or guides recommending using high heat to bring a pressure cooker up to pressure.

You wouldn't want to do that on an induction stove because the pressure cooker would reach pressure quickly. As a result, it might burn food to the base. Additionally, you might leave with an under-done dish.

If you want to prevent that situation from happening, you'd have to adjust by bringing the pressure cooker up to pressure on medium heat.

Typically, after you bring a pressure cooker up to pressure, you'd turn the heat down. On an induction stove, you'll need to stick around to make adjustments to the heat. The sides of the cooker are going to be at a lower temperature than the base.

Once you lower the temperature on the stove, the base might not be hot enough to maintain pressure and heat the rest of the pot. So, you'll have to mess around with the heat to ensure internal pressure doesn't fall quickly.

Can an Induction-Based Pressure Cooker Be Used on a Gas Stove? 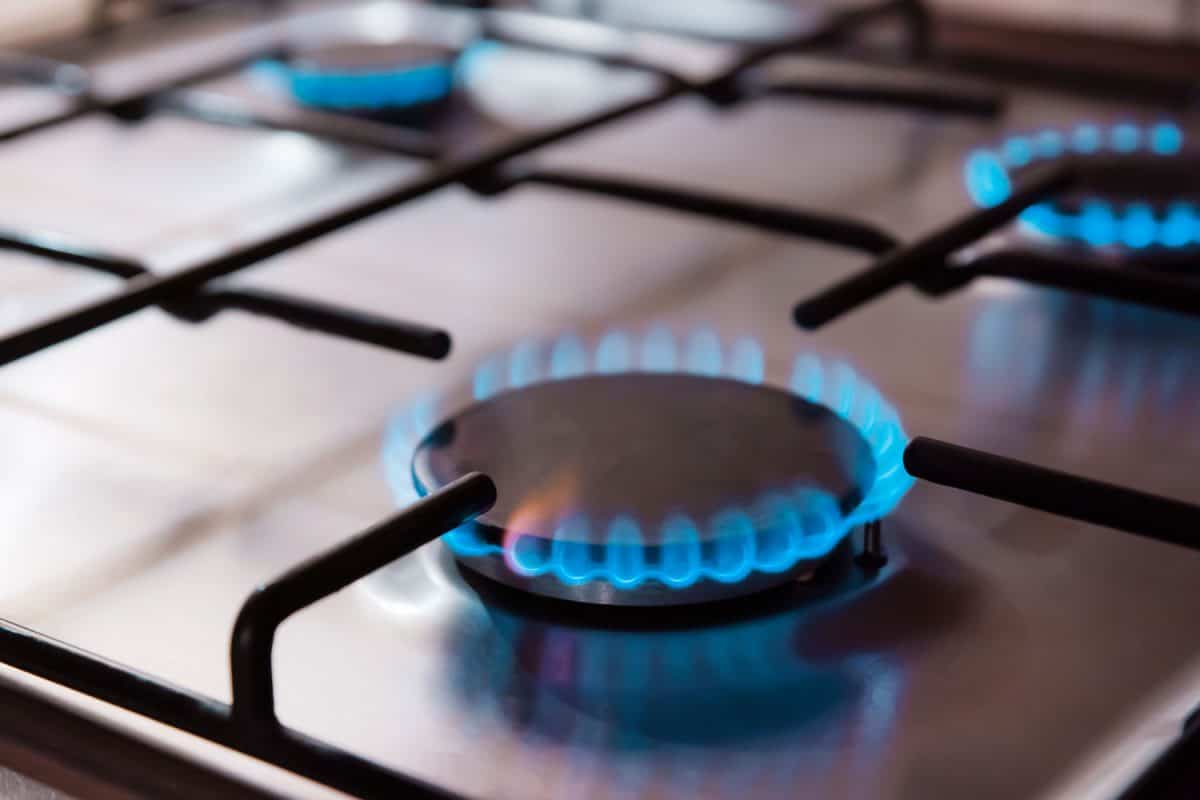 An induction-based pressure cooker would have slight adjustments to maximize its efficiency on an induction stove. In other words, it will be magnetic and have a flat base.

It would. But, it's not as efficient as a flat-bottom cooking pot.

How To Use Normal Pressure Cooker on Induction Stove

If you have a normal pressure cooker with no indication that it's induction-friendly, you might be curious to find out if it works on an induction stove. Unfortunately, it won't work if it does not meet the requirements mentioned above.

If it doesn't, you're going to need to purchase a pressure cooker with a stainless steel and flat base. Otherwise, you can attempt using a standard pressure cooker on an induction stove. But, in most cases, it won't work.

What Is the Difference Between Induction and Non-Induction Pressure Cooker? 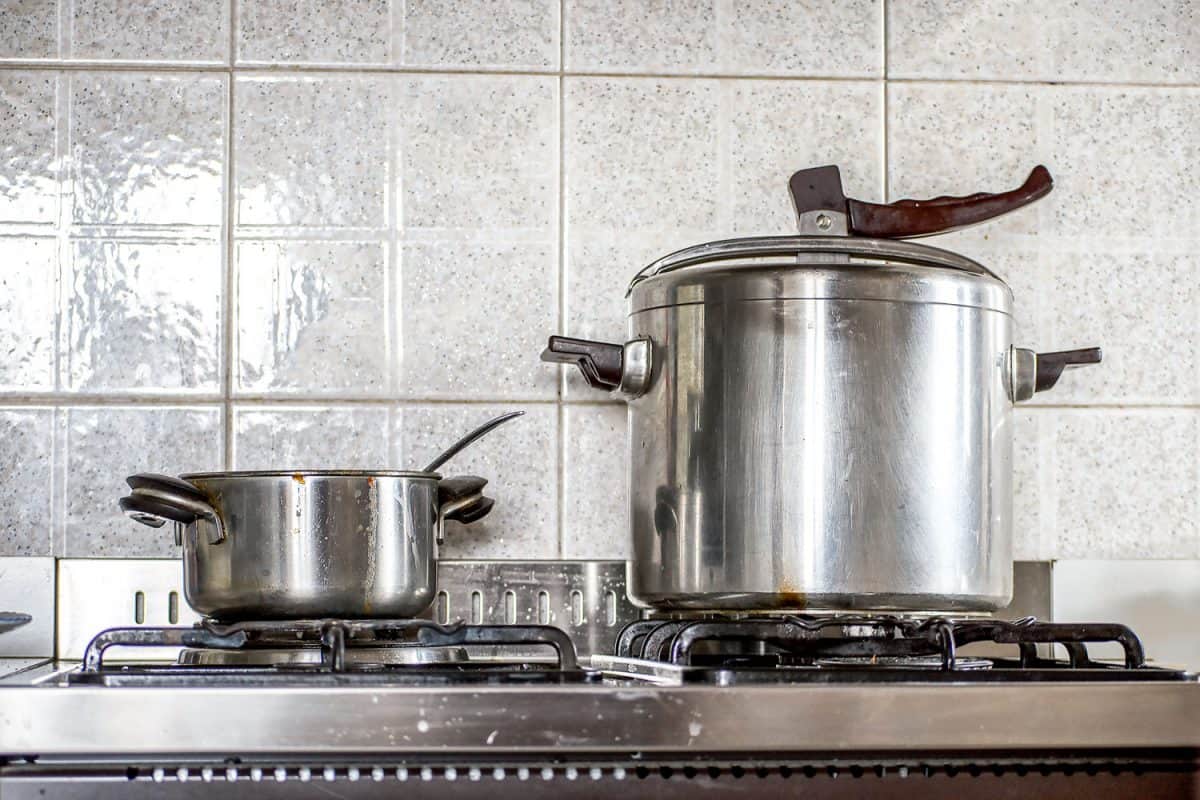 Therefore, it wouldn't work on an induction stove. In essence, the only difference between an induction and non-induction pressure cooker is the presence of ferromagnetic qualities. Otherwise, it would be difficult to tell them apart by physical appearance. 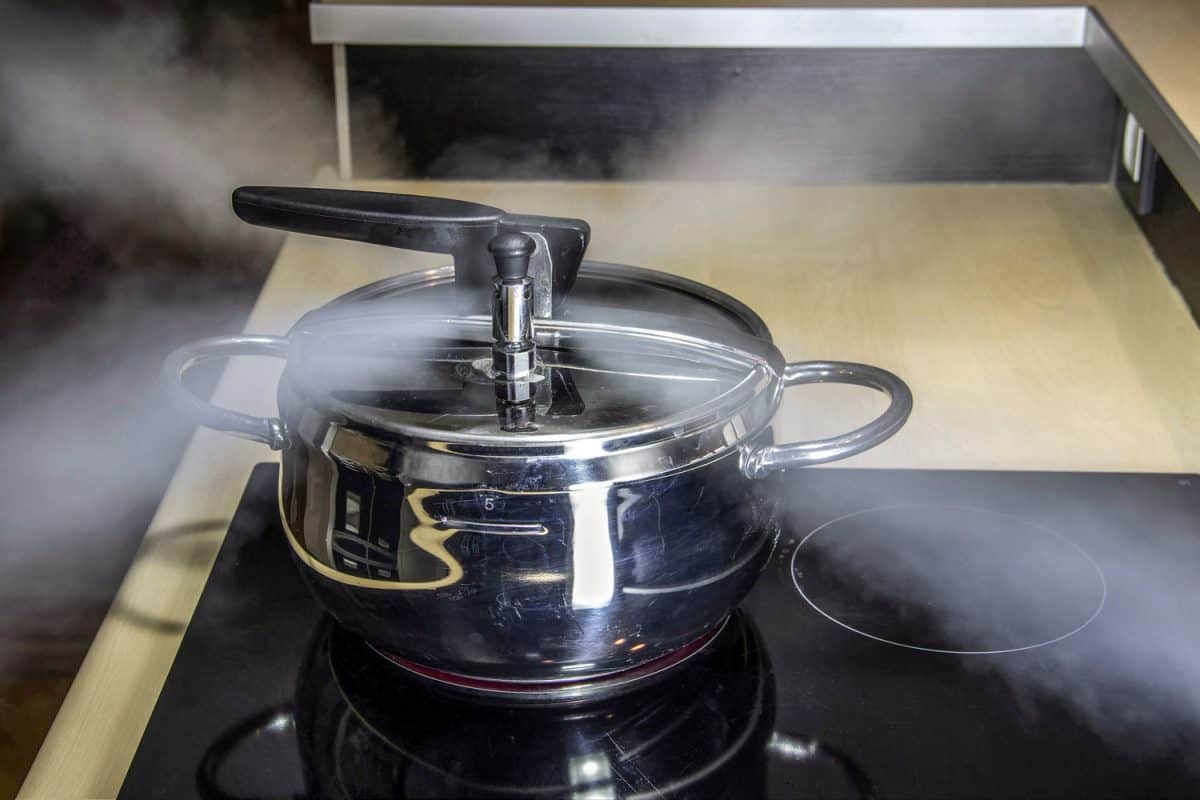 Before you go, do you have other induction cooking concerns? Do you own Le Creuset cookware? If you'd like to find out if it's compatible, check out our post:

Can Le Creuset Be Used On Induction Cooktops?

Is it your first time boiling an egg on an induction stove? If you're curious how long it would take, check out our post:

How Long Does It Take To Boil An Egg On An Induction Stove?

Can You Use Whole Coffee Beans In A Percolator?

How Long Does A Rice Cooker Take?