Cucumbers are the perfect vegetable for hot summer days. Whether adding them to a salad or sandwich, making a vegetable tray, or just using them as an accouterment for a home spa day, keeping your cucumbers fresh and crisp is a definite necessity. Since cucumbers are best served chilled, does that mean you should store them in the fridge? We have done the work to bring you the answer.

It may seem like a no-brainer that cucumbers should be stored in the refrigerator since cucumbers taste best cold. However, there are actually a couple of different schools of thought as to where cucumbers should be stored. Believe it or not, it is generally accepted that for the longer term, cucumbers should actually be stored at room temperature. Studies have found that a cucumber stored at room temperature can last for two to three weeks. On the other hand, one stored inside the refrigerator will only last for one week. Because of this, it is a good idea to store them on the counter or in the pantry until you are closer to using them.

Keep reading as we go into a little more in-depth discussion below as to why the different storage temperatures are good for the vegetable's longevity. We will also let you know what pitfalls you should watch out for when storing cucumbers both at room temperature and refrigerated as well as what steps you need to follow to ensure your cucumbers stay their freshest and tastiest. 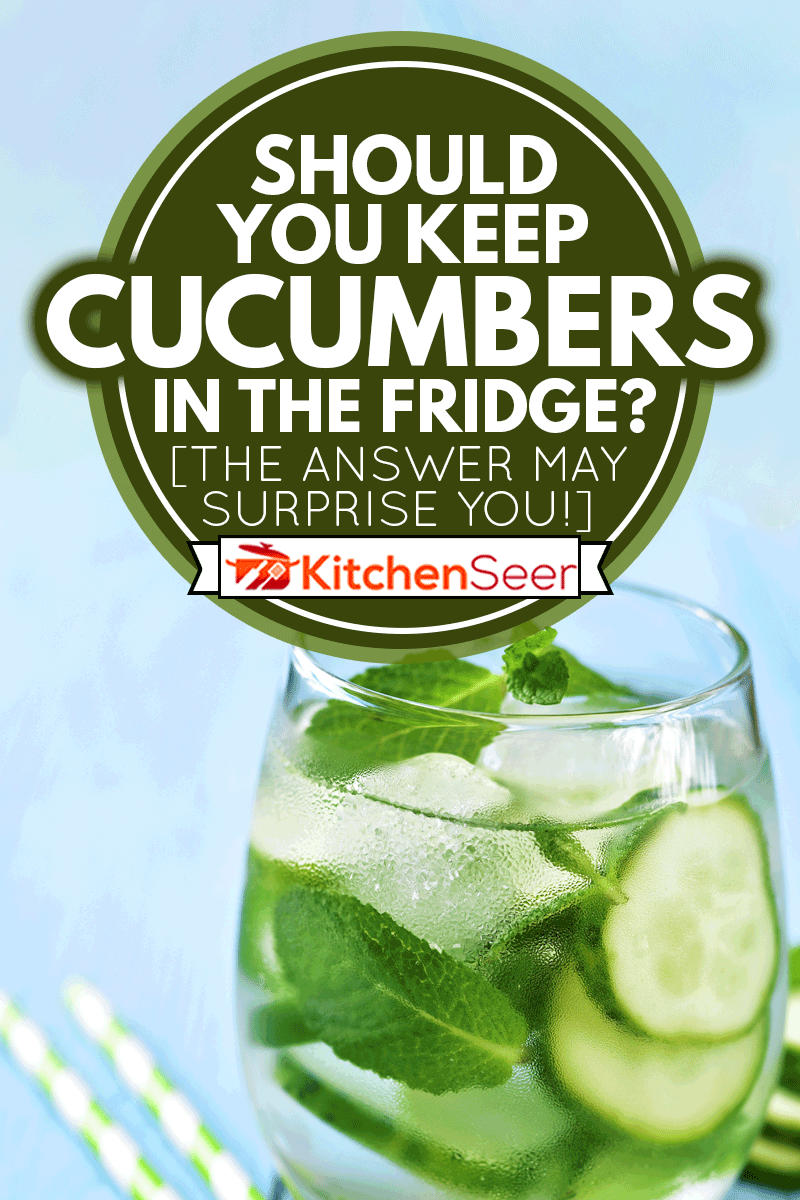 You might not think of it, but in addition to being fresh and crisp, cucumbers are a great tool to fight dehydration during the hotter summer months. This is due to their extremely high water content.

At an amazing 96% of water by volume, cucumbers have the highest water content of any fruit or vegetable. Even everyone's favorite summer fruit, watermelon, only has 92% water by volume. 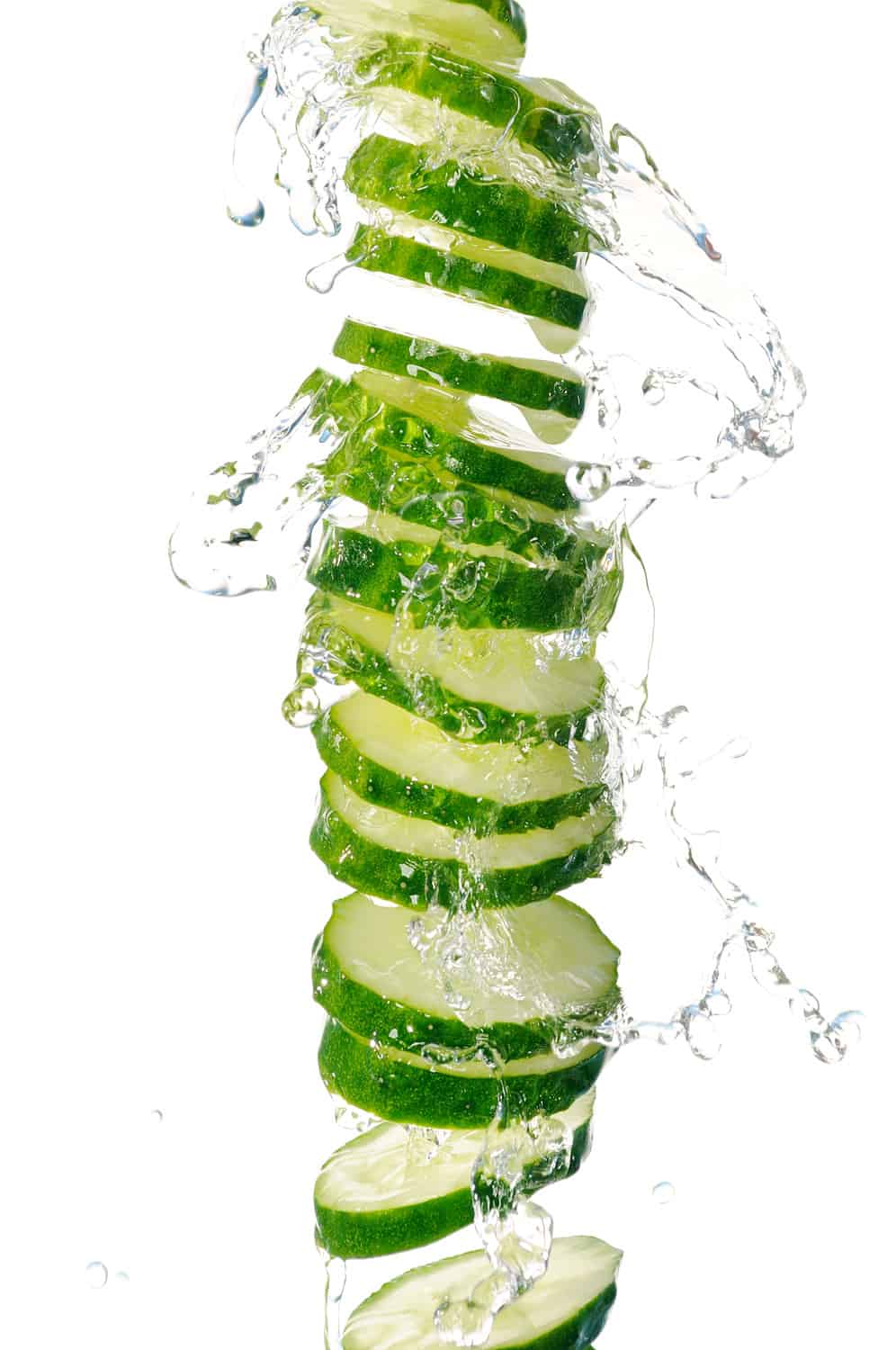 As advantageous as a cucumber's water content may be, it is a double-edged sword when trying to figure out where to store these vegetables. The amount of water in the vegetable makes them highly susceptible to something known as "chilling injuries" which can result in accelerated decay. According to research done at the Post Harvest Center at the University of California at Davis,  cucumbers are sensitive to chilling injuries at temperatures below 10°C (50°F).

These chilling injuries can take the form of water-soaked areas or spots of pitting on the skin of the cucumber. This is due in part to the cucumber's high water content. It is believed that this is one of the reasons that studies have shown cucumbers stay fresher longer when stored at room temperature. Store cucumbers at room temperature until shortly before you plan to use them.

Still, since cucumbers are better when served crisp and cold, you should move them to the refrigerator only a day or so prior to serving them. However, it is important to remember that cucumbers should be stored in the middle of the refrigerator where the air is slightly warmer. The lowest shelf is where the coldest air is found. You should also wrap your cucumbers in a paper towel.

A paper towel helps collect any moisture that may seep out at cooler temperatures. The towel soaks up the moisture, keeping the cucumber dry and avoiding the damage that dampness can do to the vegetable. Once you have wrapped them in a towel, you should then place the cucumbers inside a plastic storage bag.

Now you should know what the best options are for the long-term storage of cucumbers! Next, we are going to answer some other questions you may have about how to keep this healthy vegetable fresh and delicious. 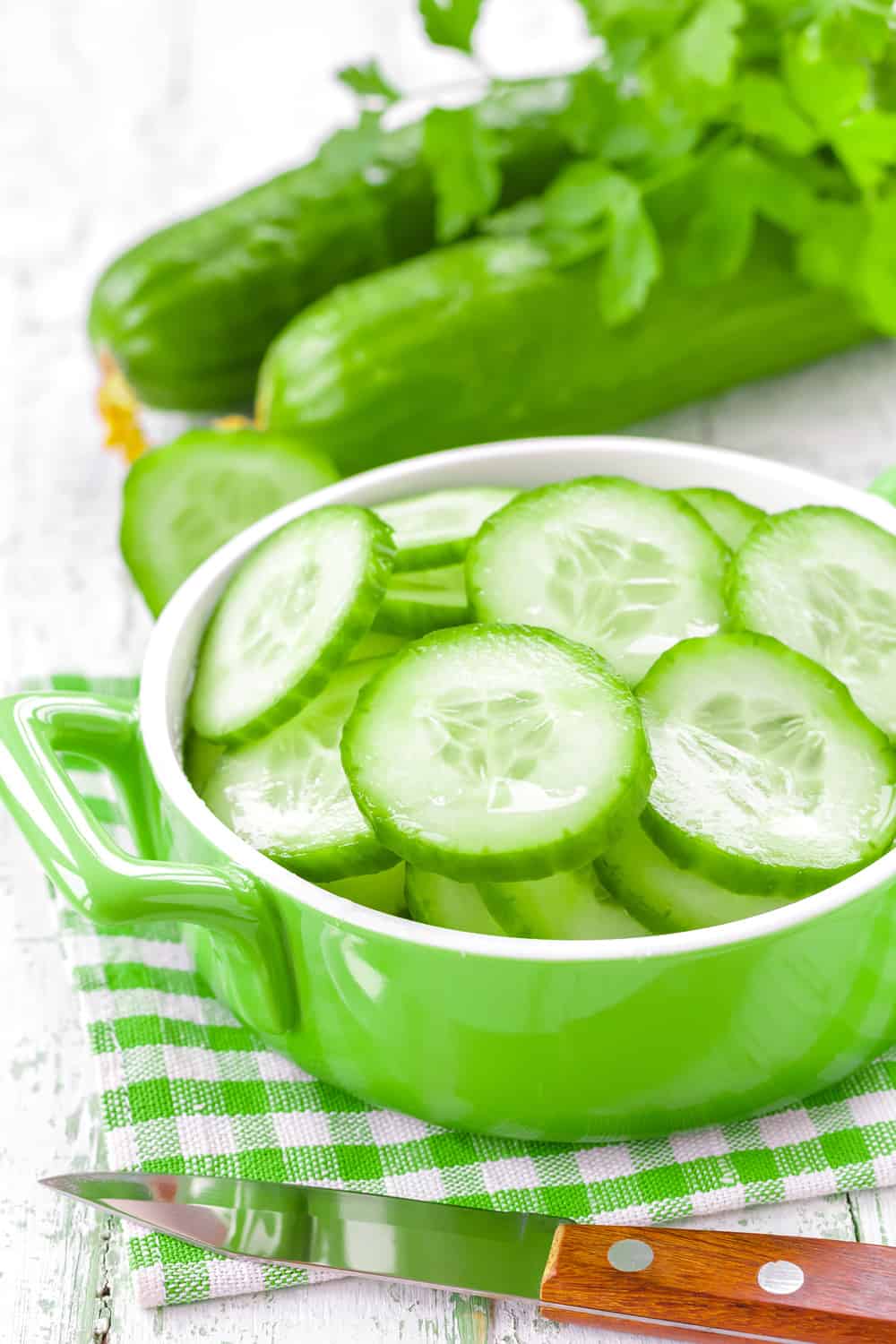 How to store cucumbers after slicing

Not surprisingly, a sliced cucumber will stay fresh for a shorter time than a whole cucumber. However, as long as you store it properly, it should still be able to last 3-5 days in the refrigerator. While it is best to wait to cut a cucumber until you are going to use the whole thing, sometimes that just isn't possible. Luckily, it is just as easy to keep cucumber slices in good shape as it is with a whole cucumber.

You should also wrap the sliced cucumber in a paper towel. Next, put the slices into a plastic bag and store them in the refrigerator. As when storing the whole vegetable, the placement within the fridge is also important to keep the cucumber at its most flavorful. While whole cucumbers do well stored at room temperature, it is better to store sliced ones in the fridge.

How long will cucumbers keep in the fridge?

In addition, place the vegetable inside an unsealed storage bag. By following these steps, you ensure that a cucumber being kept in the refrigerator will stay fresh for about a week.

How do you keep cucumbers crisp? 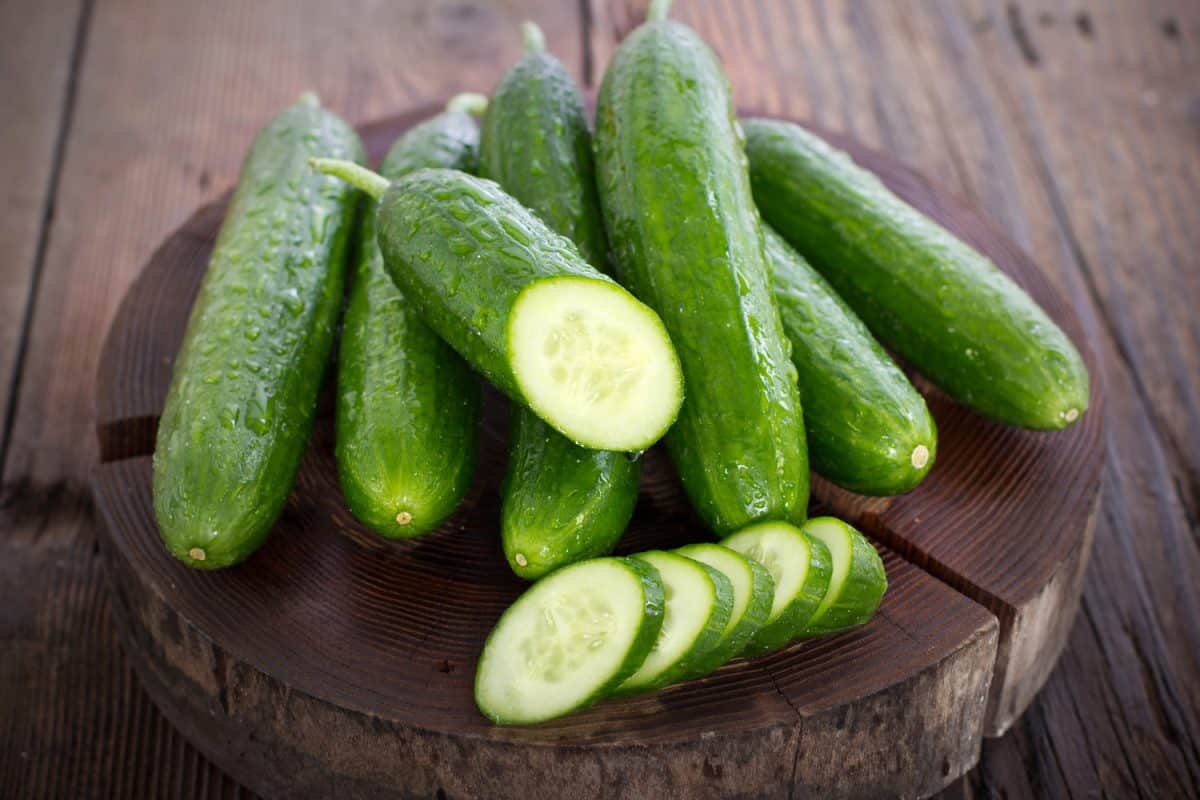 A crisp cucumber is a perfect snack on a summer day and a wonderful addition to a salad. The trouble keeping the cucumbers crunchy can be difficult. This is especially true when you have put them in a salad or they have to sit out as part of a vegetable tray.

The solution is really quite simple. Lightly salt the cucumber slices and you're all set. The salt causes the cucumber to release some of its water which will give you a fresher and crunchier cucumber.

How do you store cucumbers for a long time?

As mentioned above, when your goal is longevity, cucumbers are best stored at room temperature. When stored properly and at an ideal temperature, a cucumber can stay good for two to three weeks.

However, there is something else that needs to be considered beyond the temperature. You must also take into account the fact that cucumbers are ethylene-sensitive. This sensitivity is why they need to be stored either in plastic or in a paper bag.

This seemingly superfluous covering actually serves a useful purpose. It protects the cucumber from gasses that are emitted by other fruits and vegetables that may be stored nearby. Some of this produce, such as bananas and tomatoes, emit a chemical called ethylene. While ethylene is not noticeable to people, certain fruits and vegetables, such as cucumbers, are sensitive to it.

Due to this sensitivity, if you store cucumbers near these ethylene-producing fruits, the gas they create will speed up the ripening process. This will result in your cucumbers overripening much faster than they would if stored away from these items. Covering or bagging the vegetable protects the cucumbers from being affected by this chemical and helps you to keep them fresher longer. 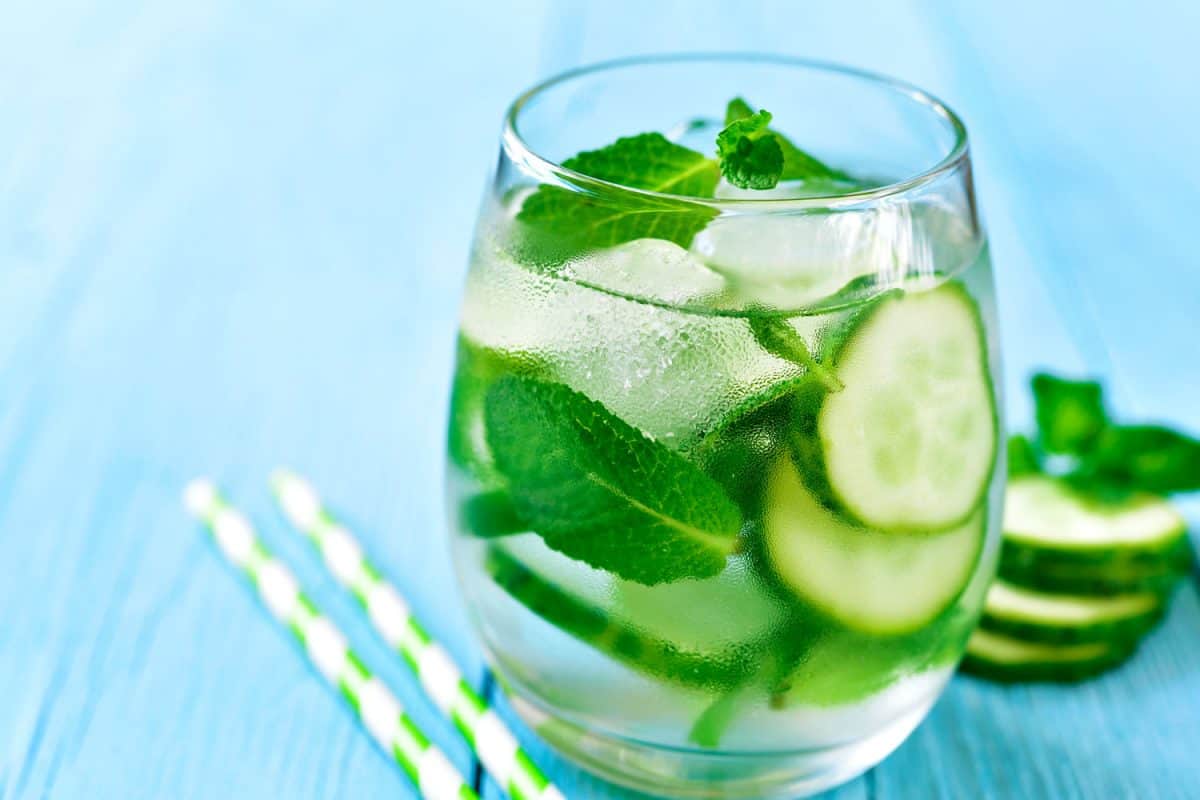 Cucumbers are an incredible hydration-packed vegetable. No matter what dish you're adding them to, they're sure to be a hit. Remember to store your cucumbers at room temperature. Room temperature storage allows your cucumbers to last between two and three weeks. Then, about a day before you need them, pop them into the fridge to cool down a bit. Cover them in a paper towel and seal them in a bag for ultimate freshness.

Before you go, check out these other veggie-related posts that may interest you:

Can Onions And Potatoes Be Stored Together?

How Long Does Corn On The Cob Last?

Should You Use Kosher Salt In Baking?

Can I Use A Meat Grinder For Peanut Butter?

How To Cook Red Potatoes – With 10 Tasty Recipes!