For some people, the concept of freezing cucumbers doesn’t sound right. Wouldn’t these water-saturated fruits turn into a soggy mess after thawing? While frozen cucumbers may not have the same “crispness” as when they’re fresh, there are many exciting ways you can put them to good use. However, if you’re going to freeze cucumbers, you must know how to defrost them properly. Please keep reading to find out all the research we’ve done on thawing frozen cucumbers.

The best way to thaw frozen cucumbers is to place them in the fridge for about eight hours before you intend to use them. Once the eight hours are up—or you feel your cucumbers are sufficiently squishy—leave your cucumbers on the counter for a few minutes. Be sure to drain all the excess water before using your cucumbers.

You could do many creative things with a batch of frozen cucumbers, but there are a few techniques worth keeping in mind. Below, we’re going to go over everything you need to know to freeze, defrost, and use cucumbers like a pro. 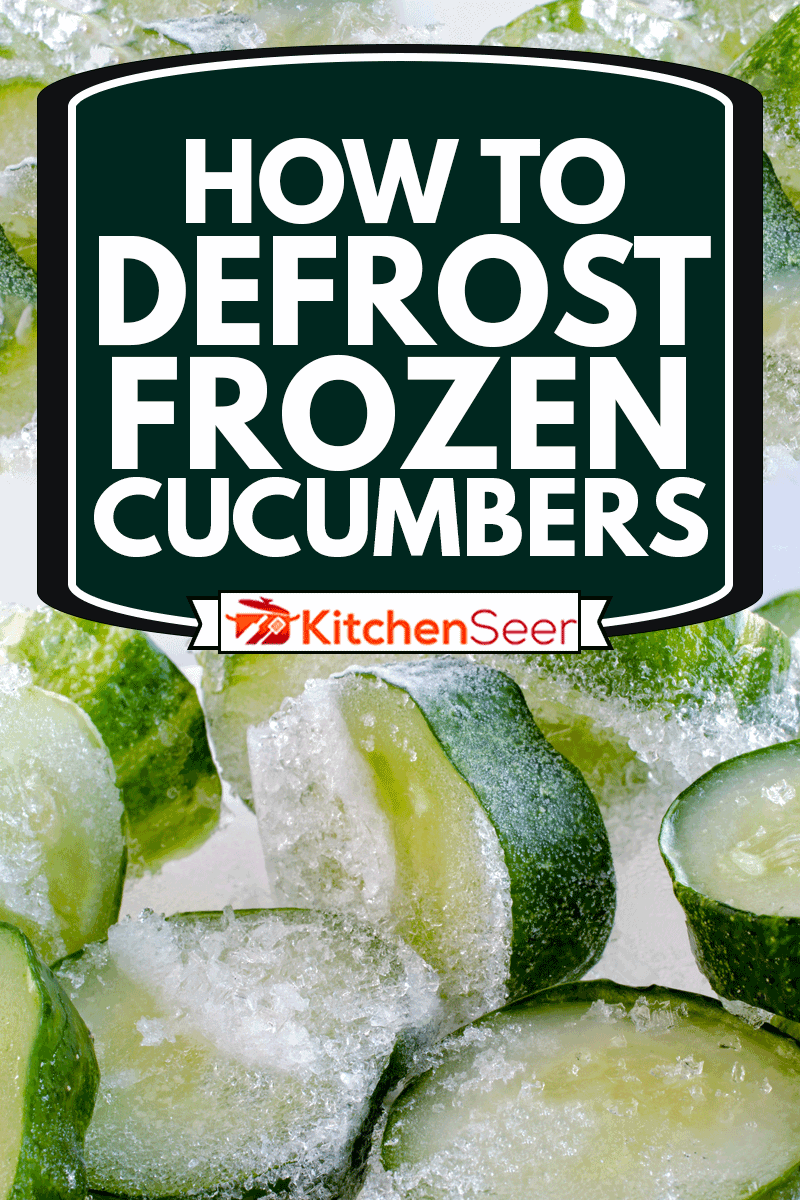 How Do You Defrost Frozen Cucumbers?

Defrosting frozen cucumbers isn’t super complicated. All you have to do is pop them in the fridge for six to eight hours before you need them, drain off any excess water, and, well, use them! This six to eight-hour recommendation comes straight from the National Center for Home Food Preservation. 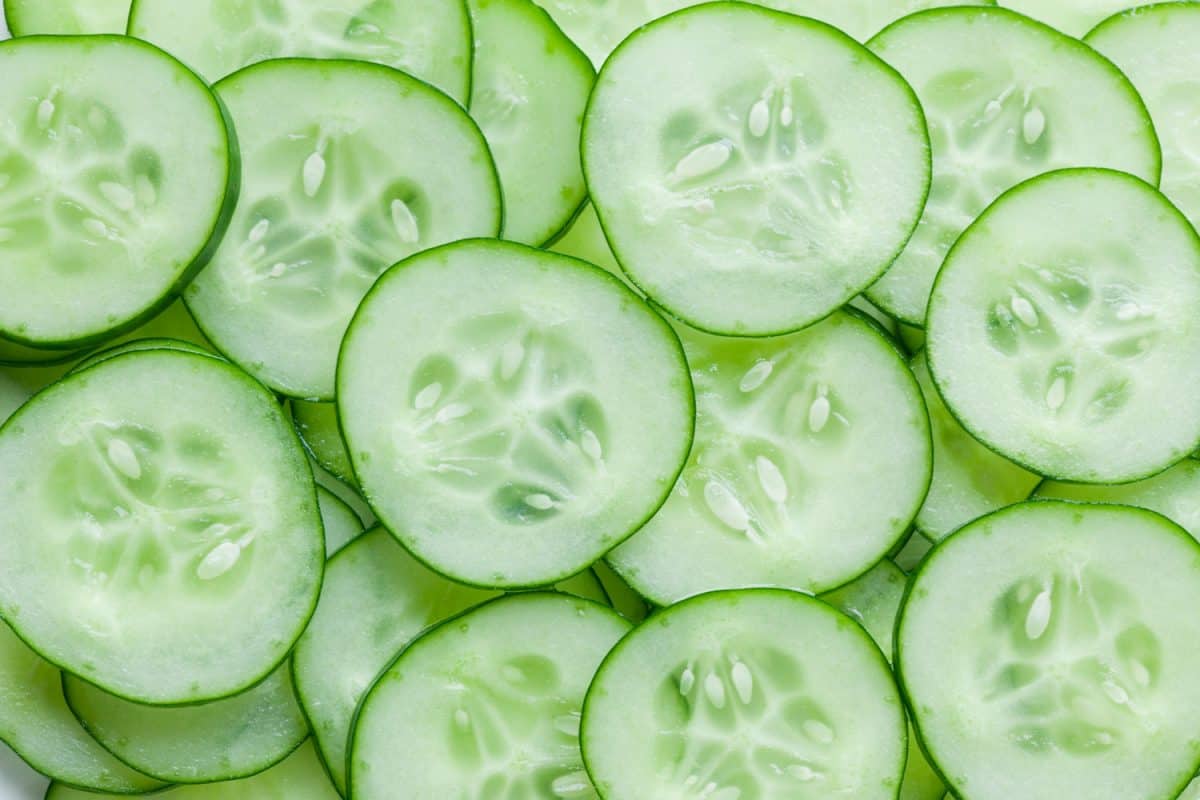 While some people like to defrost cucumbers on the counter, this isn’t the preferred method. There’s a lower chance bad bacteria will form on frozen food in the fridge versus at room temperature. This is especially the case if you live in an area with hot and humid weather.

For more helpful info on freezing and defrosting cucumbers, be sure to watch this video:

Could You Defrost Cucumbers In The Microwave?

While it may be tempting to nuke your frozen cukes, that’s not a wise idea. Remember that cucumbers are roughly 96 percent water. So, when you turn on your microwave’s defrost button, you will have a splattery mess on your hands.

Microwaving frozen cucumbers will make your cucumbers extremely mushy and just plain icky. For better tasting cucumbers, be sure to pop them in the fridge and have patience!

How Long Do Frozen Cucumbers Last? 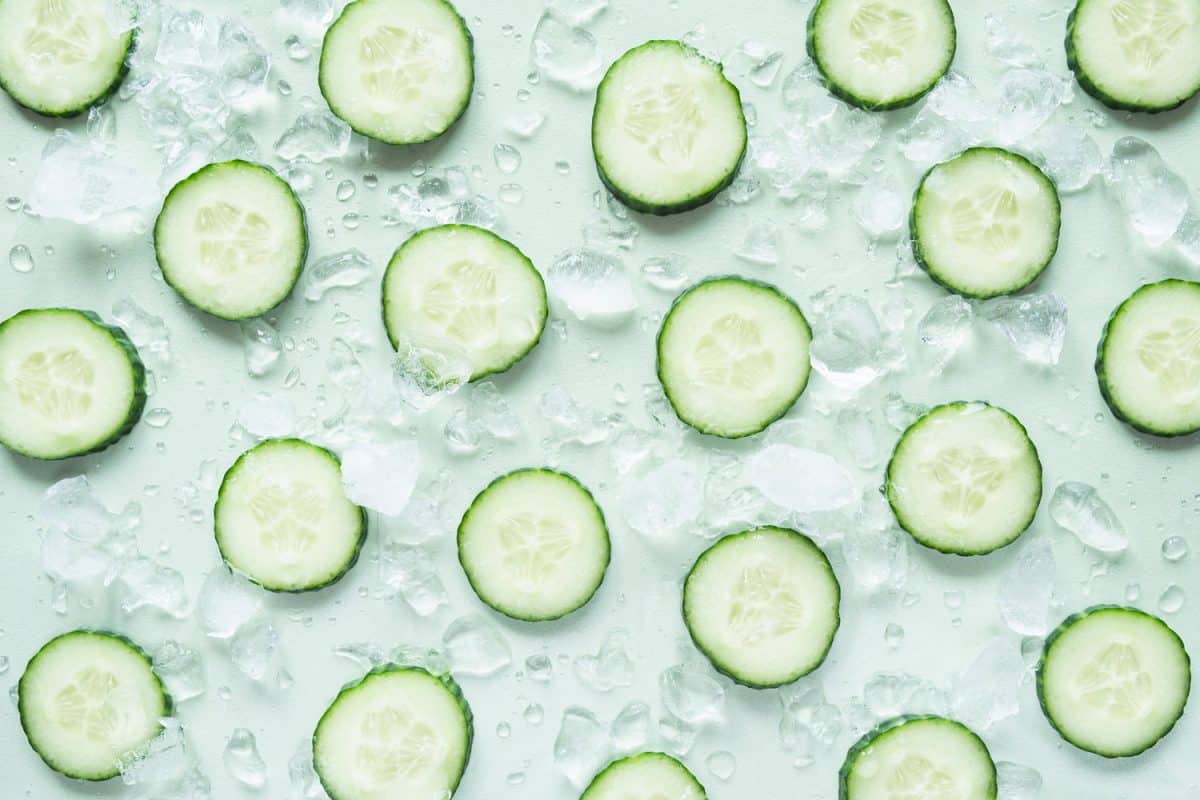 According to the USDA, most foods can last in the freezer indefinitely. So, technically, your frozen cucumbers could stay in the fridge for years without going “bad.”

However, over time, the flavor and texture of your frozen cucumbers will decrease. According to most home chefs, the optimal time to enjoy your cucumbers is between six to eight months after freezing them.

How Do You Know If A Cucumber Is Bad?

The critical warning signs that a cucumber has gone bad have to do with its appearance and texture. Fresh cucumbers should feel firm at room temperature and have no dents, bruises, or wrinkles on their skin. Cucumbers that are squishy or have a sticky outer coating are past their prime. If you notice any signs of a mold infestation, be sure to dispose of your cucumber ASAP.

It can be challenging to determine the health of frozen cucumbers because they all feel mushy once they’ve thawed. This is why it’s crucial to carefully inspect your cucumbers before you put them in the freezer. Always be sure you freeze cucumbers that have healthy skin, feel firm to touch, and show no signs of slime.

How Do You Use Frozen Cucumbers?

The downside of freezing cucumbers is they will become mushy after you thaw them. However, there are plenty of sneaky ways you could add frozen cucumbers to your diet. Here are some of the most popular ways people use their frozen cucumbers.

Sneak Some Cucumbers Into Your Smoothies 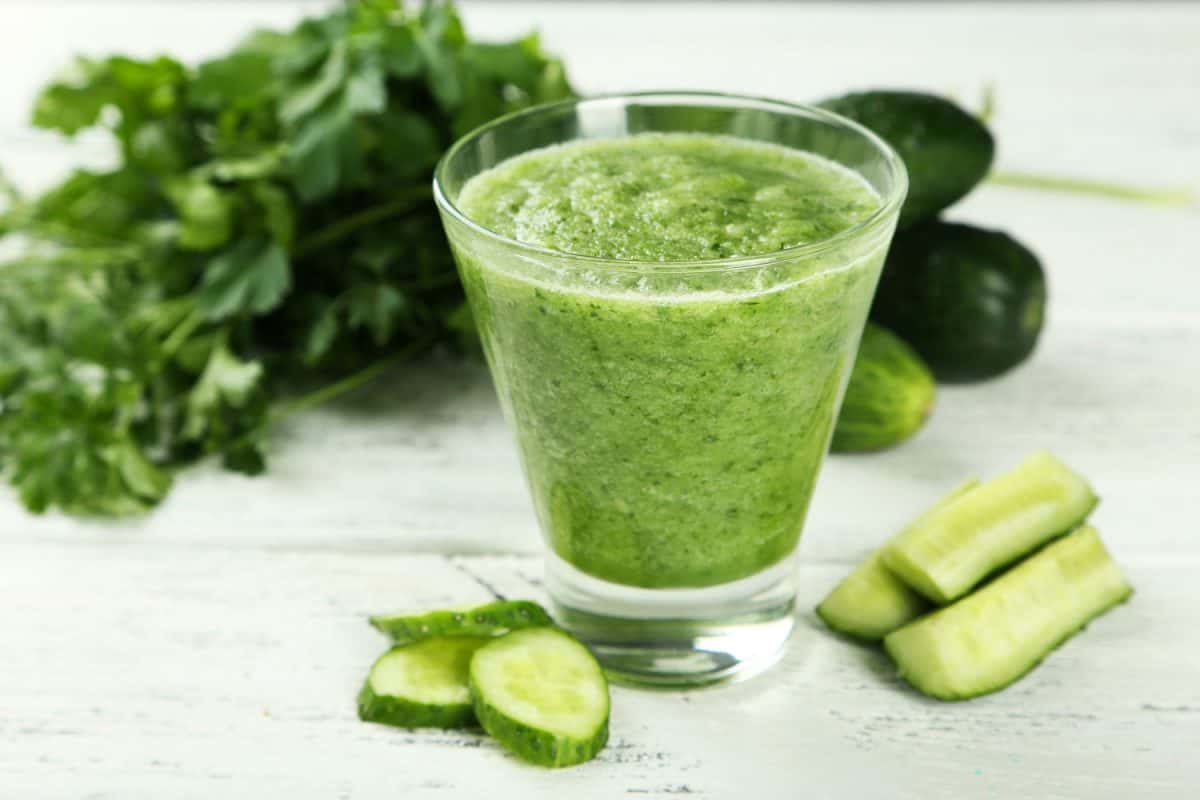 Arguably, the easiest way to use frozen cucumbers is to plop a few in your favorite smoothie recipe. Since everything gets blended in smoothies anyway, you don’t have to worry about your cucumber’s mushy texture. This is a refreshing and easy way to add nutrition to your morning routine.

Don’t have a blender? Don’t worry! KitchenSeer has an entire post on What To Do If You Don’t Have A Blender.

Another fun way to use frozen cucumber slices is to use them instead of ice cubes. Some people even purée their cucumbers and put them in fun ice cube molds. This is an awesome idea for at-home entertainers who want to add pretty patterns to their drinks.

Whether you use slices or molds, putting frozen cucumbers in beverages is a fantastic way to add flavor, nutrition, and hydration to drinks. Considering ~ 70 percent of Americans are dehydrated, we all could probably use this health hack!

What could be better than cold cucumber yogurt soup on a warm day? Just like cucumber smoothies, this tangy recipe has to go through a blender, so there’s no need to worry about soggy cuke slices. While dill is the most traditional herb in this recipe, feel free to experiment with whatever’s fresh in your local stores or personal herb garden.

FYI: Rachel Ray and Clinton Kelly made a delicious cucumber yogurt soup you could totally copy:

Who said you have to eat your cucumbers to get health benefits? Go ahead and place a few thawed cucumber slices over your eyes for an at-home spa session. Some people even mix thawed cucumbers with ingredients like skin-safe oils, gelatin, collagen powder, and lemon juice to create a DIY hydrating face mask.

If you’re interested in using your cucumbers for skincare, be sure to watch this video:

Can You Eat Cucumber That Has Been Frozen?

Frozen cucumbers are perfectly edible. If you wanted to, you could eat these cucumbers as is after they’ve been properly thawed.

Unfortunately, defrosted cucumbers won’t have the same crisp texture as fresh fruits. Since cucumbers have so much water content, they will inevitably get soggy after thawing.

Interestingly, frozen cucumbers share a lot of traits with frozen tomatoes. Not only do these fruits often get mislabeled as veggies, they both get mushy after being left in the freezer. However, that doesn’t mean you can’t use these fruits for many fantastic applications in the kitchen.

By the way, you could learn more about freezing tomatoes on this KitchenSeer post, “Do Tomatoes Freeze Well?”

What Can I Do With Frozen Cucumber Slices?

The simplest way to use frozen cucumber slices is to add a few to your favorite beverages. Not only will frozen cucumbers keep your drink cool, but they will also add a refreshing hint of flavor. This is a fantastic hack for people who struggle to drink enough “plain old water” every day.

Another simple way to use frozen cucumber slices is to add them directly to a morning smoothie. With this method, you’ll enjoy all of the nutritional benefits of cucumbers without having to worry about their soggy texture.

For more tips on how to use frozen cucumber slices, be sure to watch this YouTube video:

How Do You Salvage A Frozen Cucumber?

If you put your cucumbers in the freezer by accident, you may be wondering how you could save this squishy mess from the trash bin. Well, there are many possible options, all of which share one feature: they mask the thawed cucumber’s sub-par texture. Instead of showcasing your cucumber’s crisp bite, you have to find ways to keep this fruit in the background.

Here are a few cool suggestions for salvaging frozen cucumbers from being a squishy side dish:

Have Fun Cooking With Frozen Cukes! 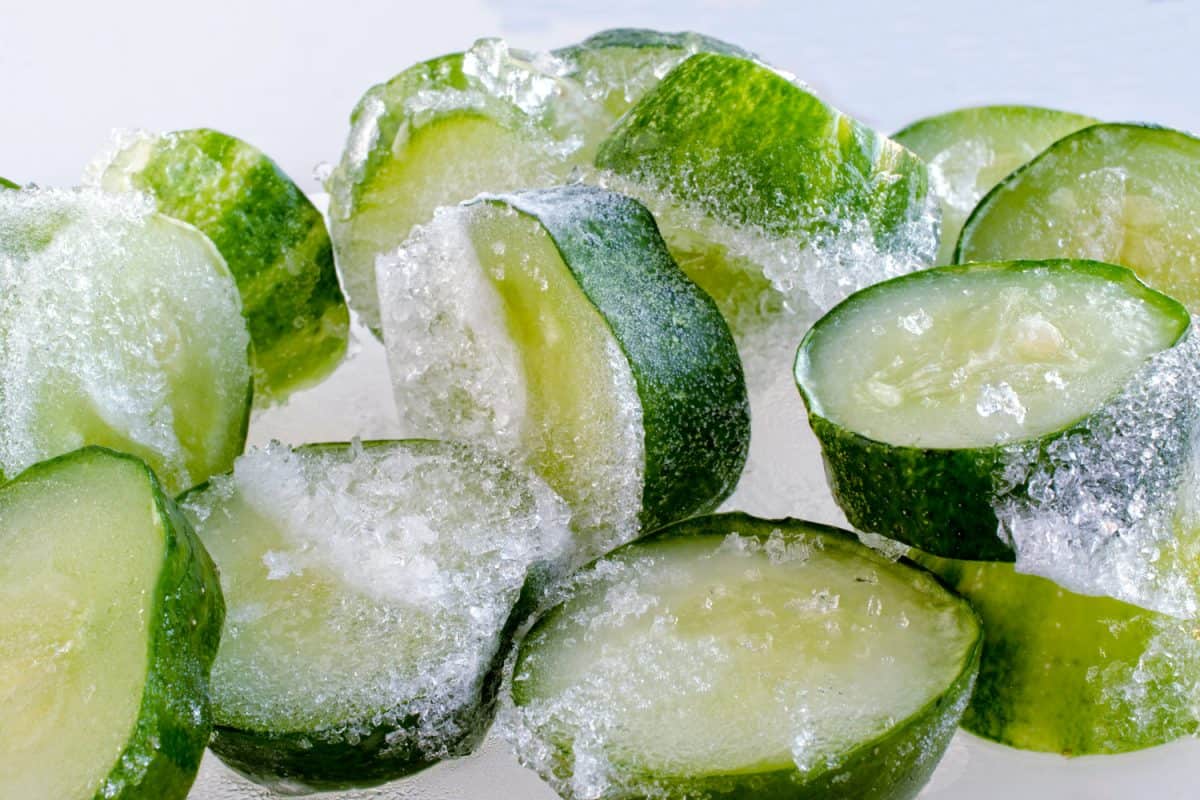 While many people avoid freezing cucumbers, there are many innovative ways you could use this refreshing fruit. Just remember to defrost your cucumbers in the fridge for optimal results. Whatever you choose to do with your frozen cucumbers, try to find recipes that don’t rely on a cucumber’s distinctive crunch.

By the way, did you know you could freeze homemade pickles? For expert tips on pickling cucumbers, you’ve got to read our recent post: How To Brine Cucumbers.

Does Microwaving An Avocado Soften It?

How Much French Fries Per Person? [And How To Make Them Healthier]

Should You Wash Apples Before Storing?