There is something about a homemade pickle that is incomparable. Whether you have an overabundance of cucumbers in your garden or you bought some from the farmers market, it can be incredibly easy to make them into pickles. If you are wondering how to brine cucumbers for pickles, you have come to the right place! We've done the legwork for you and found the quickest and easiest way to turn those cucumbers into deliciously crunchy pickles.

In order to brine cucumbers for pickles, you'll want to follow these steps:

We love this foolproof method of brining cucumbers because it is incredibly easy, and the pickles have a good crunch to them. Keep reading as we break down each of these steps so that you can replicate this process in your home and enjoy these delicious pickles. We also answer a few common questions surrounding the pickling process to help eliminate any confusion. 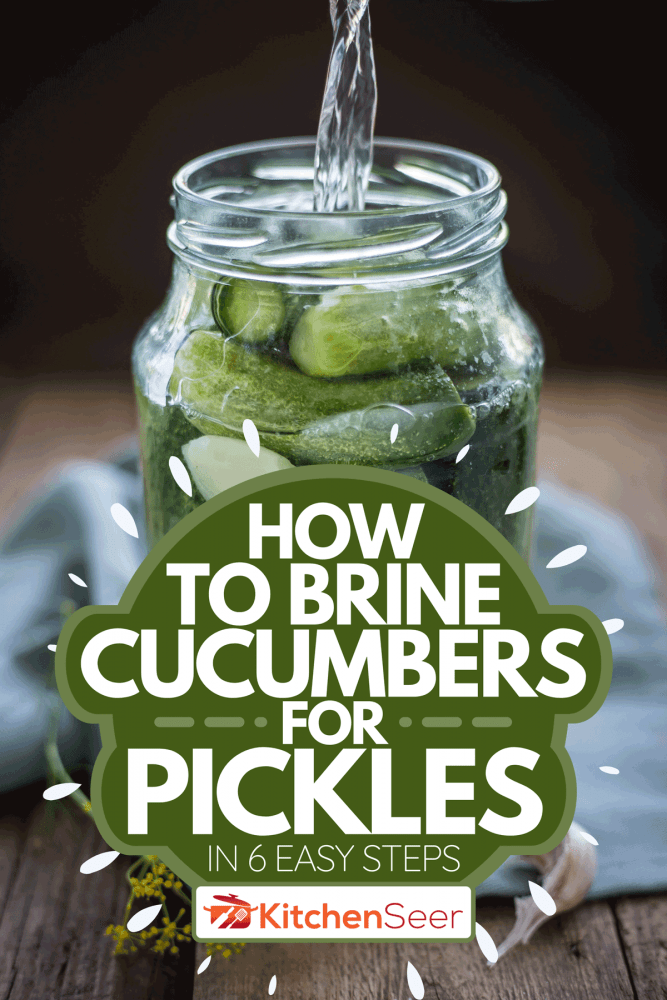 Here we have outlined six simple steps to produce crisp pickles whenever you are craving that salty, tangy snack.

Whether freshly picked or store-bought, it is important to wash your produce before consuming it to remove any dirt or pesticides. Once your cucumbers have been rinsed, you want to trim the ends off. Stems aren't a lot of fun to eat, so go ahead and cut those off.

We also found repeatedly across all pickling methods that you should cut off the blossom end of your cucumber. Apparently, due to an enzyme within the blossom end of the cucumber, leaving it on can result in a soft, mushy pickle. We couldn't find a good scientific source to back up this claim, but since it takes seconds to do, we don't see any reason to skip this step.

2. Cut Cucumbers Into The Desired Shape

You can leave your cucumbers whole or cut them into halves, quarters, chips, or slices. It really depends on your personal preference. For cutting into chips to be used on a hamburger, we suggest using a mandoline to achieve a consistent thickness for your pickles. A mandoline can also be used for slicing your cucumber into long strips perfect for sandwiches.

3. Add Cucumbers & Seasonings to The Jar

These are the seasonings we like, but you do not have to use these exact seasonings to produce a good pickle. You can experiment with other spices like allspice, coriander, crushed red pepper, onion, or turmeric.

We have made it to the most important step in this whole process because without the brine cucumbers cannot become pickles! In a saucepan, combine 1-cup water, 1-cup distilled white or apple cider vinegar, a tablespoon of fine sea salt, and a tablespoon of sugar. Bring to a simmer and stir until the salt and sugar are completely dissolved. Remove from the heat and let cool.

5. Pour The Brine Into The Jar

Once the brine has had a chance to cool down, pour the solution into the jar. Be sure to completely cover your cucumbers with the brine. You can use a spoon to push the cucumbers down into the brine if necessary. We suggest leaving a little bit of space at the top of the jar if possible. This is simply to avoid making a big mess when you reopen the jar to consume your pickles.

6. Seal The Jar & Place It In The Refrigerator

This last step is the easiest but takes the longest. Tighten your lid firmly and shake well to get those spices well distributed. We suggest letting your cucumbers sit in the brine for at least 48 hours in the fridge. It is important with this method that you keep the pickles in the fridge, or they will spoil! Kept properly in the refrigerator, these pickles should last about 3 months.

For a visual representation of these steps, watch this video:

Do you have to boil brine for pickles? 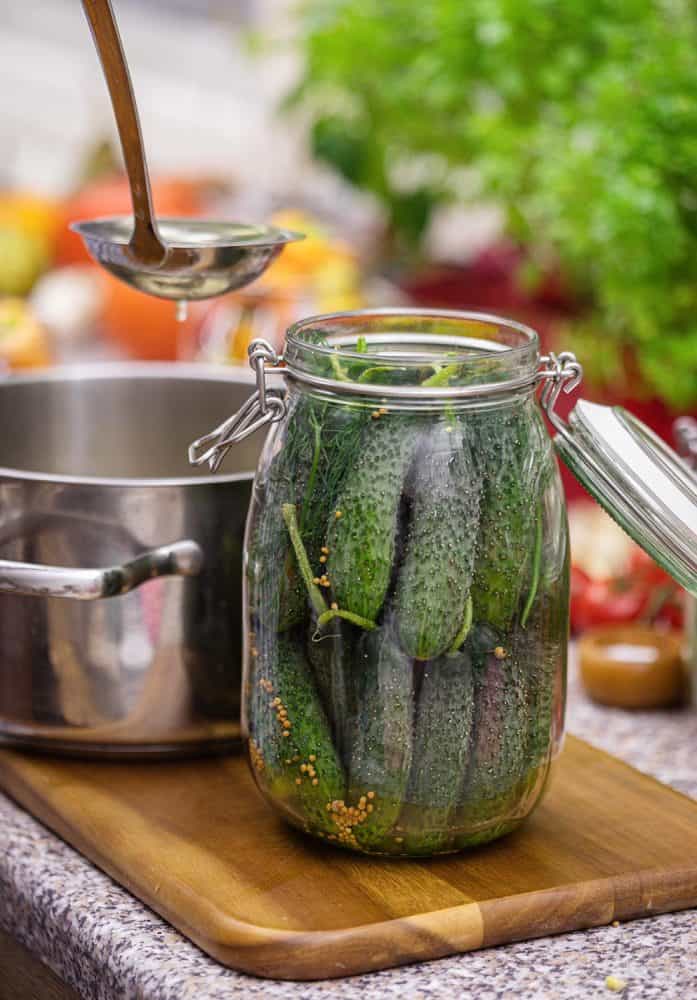 It is not a requirement to boil your brine for pickles. Many people boil the brine because it speeds along the process of dissolving the salt and sugar used in the brine. Some people do not like pouring hot brine on their cucumbers because it temporarily cooks the vegetable and can reduce the crunchiness of the pickle. You can simply let the brine cool for 10 minutes to avoid this.

Check out this article to discover What Type Of Pot Is Best For Boiling Water.

Do you refrigerate while brining? 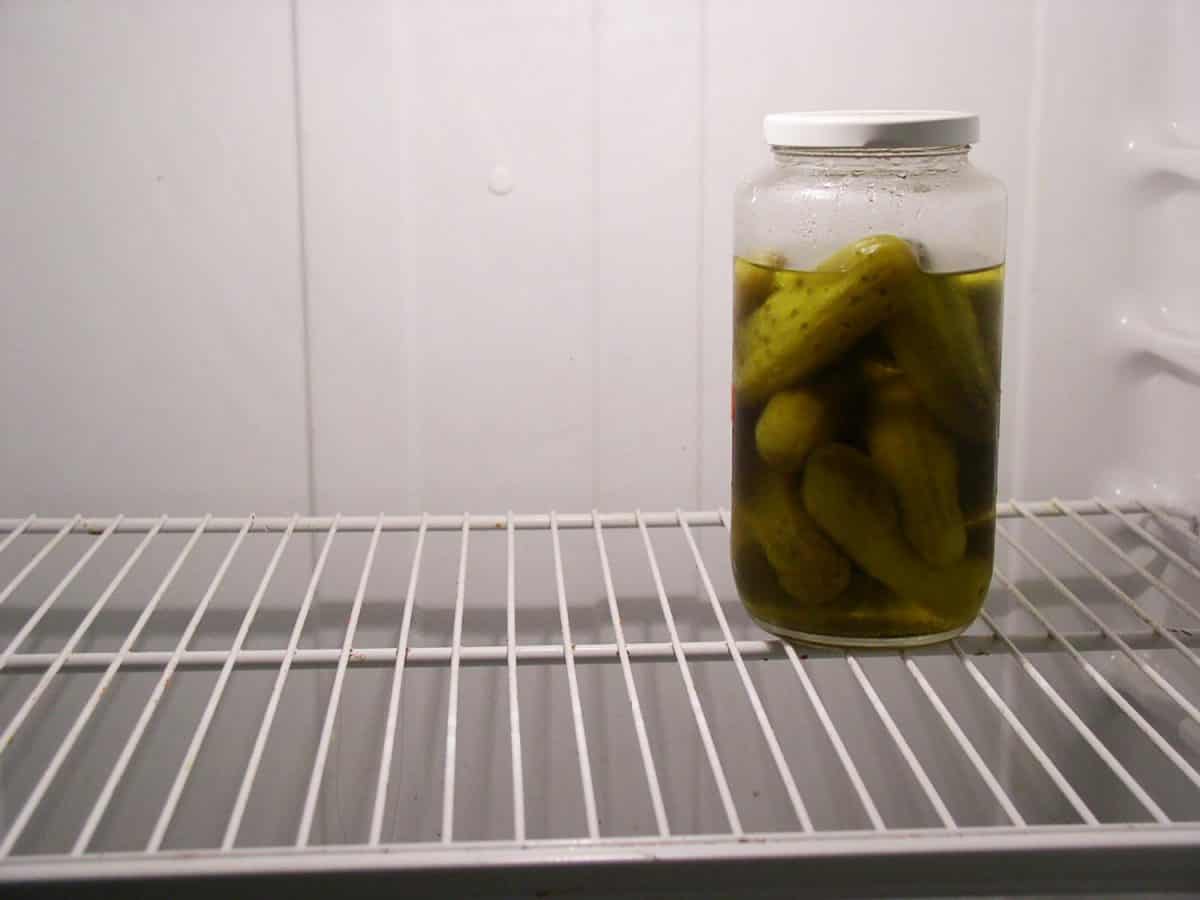 For this particular method, you do need to refrigerate while brining; otherwise, your cucumbers will spoil. There are three common methods for pickling cucumbers: fermenting cucumbers, canning them, and the refrigerator method. We choose the refrigerator method because it doesn't require weeks of effort like the fermentation process, and it doesn't require special equipment like the canning method.

If you decide to ferment your cucumbers, it is suggested to keep them between 65 to 70 degrees while they are in the brine. Therefore you should not refrigerate your cucumbers with this method as most fridges are much cooler than that. When you have canned your pickles, they are shelf-stable, which means they do not need to be refrigerated until you have broken the seal on the jar.

How long do pickles need to brine?

For this exact method, you can brine your cucumbers anywhere between 12 to 48 hours. The longer you let them brine before consuming, the better. The reason for this is that your cucumbers need time to absorb the flavor of the vinegar and seasonings to make them taste like a pickle.

If you wait a few hours, you will produce icebox pickles that still taste mostly like a cucumber. Give it a couple of days for the flavor to develop, and it will be well worth the wait.

How long do you soak cucumbers to make pickles? 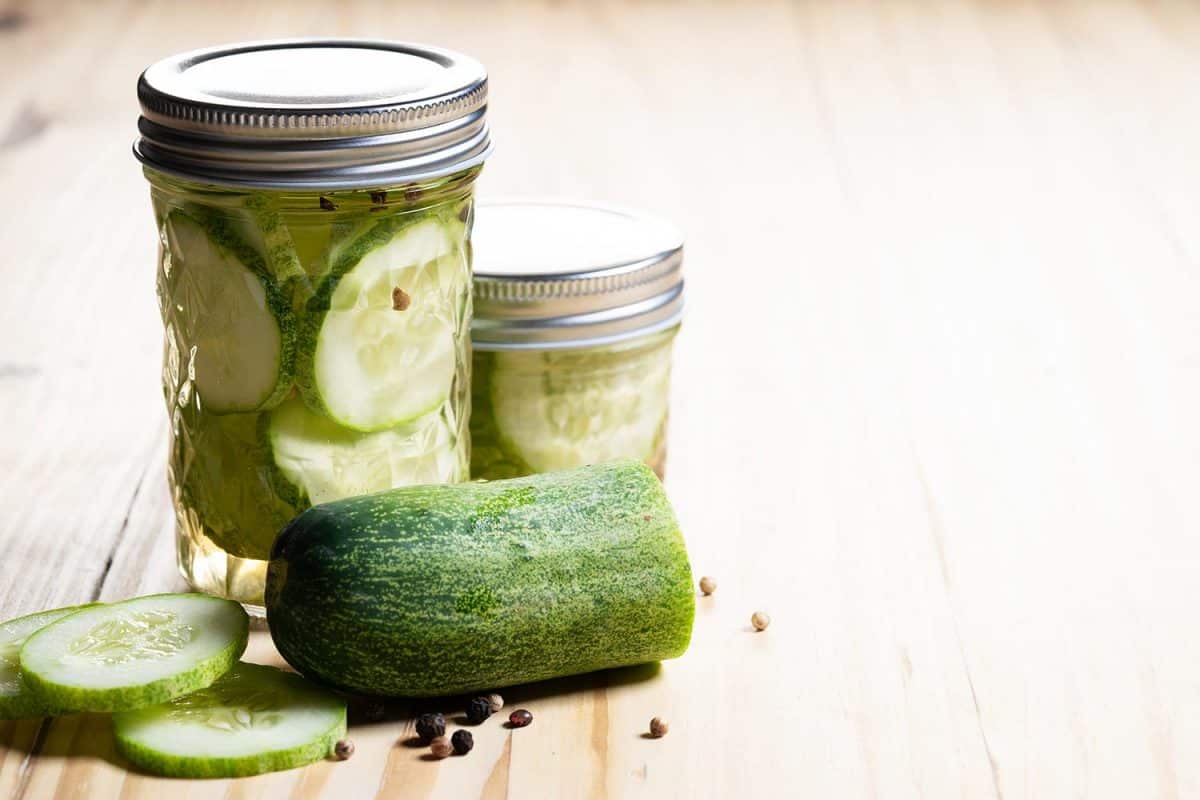 If you ever watched your grandma make pickles, you may remember her soaking the cucumbers in lime or alum, which is calcium hydroxide. She did this to help the pickles remain crisp during the pickling process.

These days, it really isn't necessary to add a firming agent, especially if you employ the refrigerator method. If you plan on fermenting or canning your pickles, a better alternative to ensure crunchy pickles is to soak the cucumbers in ice water for four to five hours before brining.

Is pickle juice the same as pickle brine?

What is the difference between pickle juice and pickle brine? The answer is, they are the same thing. Pickle brine is the solution used at the beginning of the pickling process, which contains water, salt, vinegar, and seasonings to impart flavor and preserve the pickles.

Once you have eaten all the pickles, the leftover green juice is the same brine used initially. Nothing has changed except maybe some color leeching from the cucumbers or added spices.

While you can follow this method of brining cucumbers into pickles, don't limit yourself to only cucumbers. You can pickle all sorts of vegetables like beets, carrots, cabbage, garlic, onions, or peppers. By following these simple steps you can enjoy pickles anytime you want.

We suggest checking out this article before you go if you're interested in the steps and foods that you need To Stock A Pantry For A Year.

How Long To Cook Stuffed Peppers

How to Grate Parmesan Cheese Without a Grater [5 Options Revealed]