Banana pudding is a favorite dessert for many that is best recognized by its beautiful layers. But how many layers does banana pudding need? We've scoured recipes and cookbooks to answer this question for you:

Most layered banana puddings have at least four layers. From top to bottom, these are:

However, you can also double some or all of these layers or even add in different layers, such as a cookie crumble.

In this article, we'll take a closer look, layer by layer, at this dessert. We'll see how banana puddings differ when made with meringue or whipped cream, custard or pudding, and also give some tips on making your layers as lovely as possible in a trifle dish. Read on to learn more! 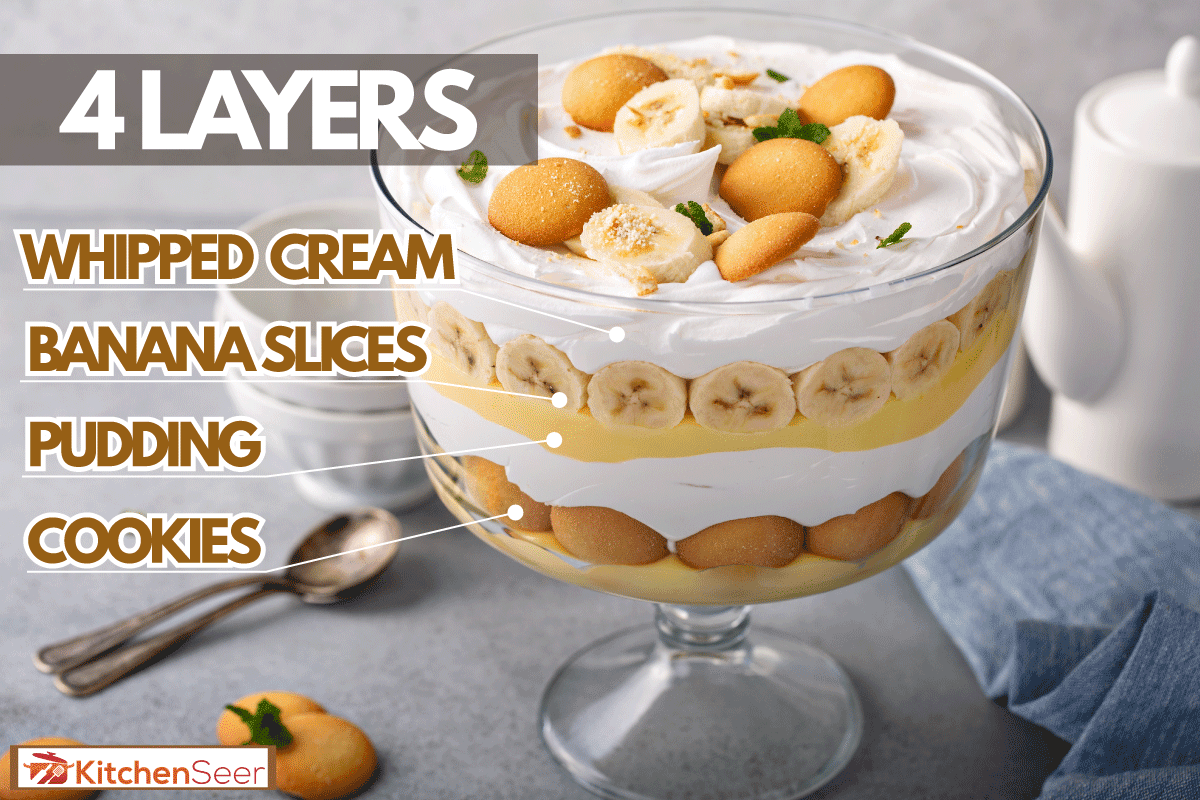 What is the proper way to layer banana pudding?

Banana pudding has been a mainstay of great homemade desserts for generations. Like other popular homemade dishes, approaches vary from family to family and many are fiercely loyal to a singular way of preparing it.

Because of this, it would be a fool's errand to suggest that there is a single "proper" way of layering banana pudding. However, we would suggest that most agree on two layers: the top and the bottom.

So what goes down first in a banana pudding? The cookies. These cookies will absorb moisture and flavor from the layers above them. By putting them down first, you make sure that the cookies will soak up more of that moisture, becoming soft enough to eat with a spoon. 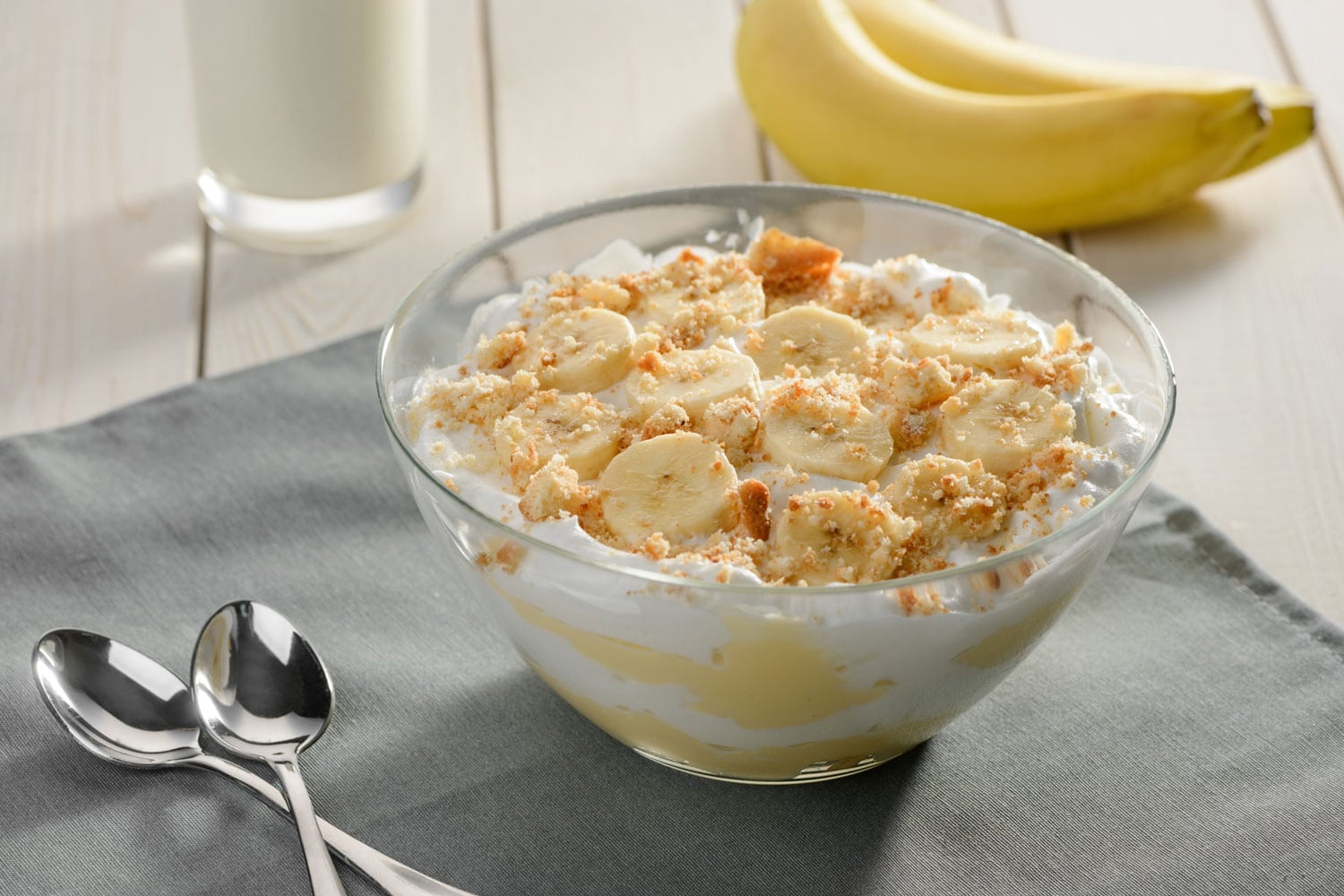 After the cookies, your recipe might call for either banana slices or the pudding/ custard. Both work well here, but, if we had to weigh in, we'd suggest going with banana slices first.

We also said that most agree on the top layer for banana pudding. However, this is only part of the story.

Most agree that the top layer should be a sweet topping, different from the layers underneath. The two most common options for this are meringue and whipped cream. Which one you choose will depend on your personal preference, preparation method, and maybe even your family tradition. 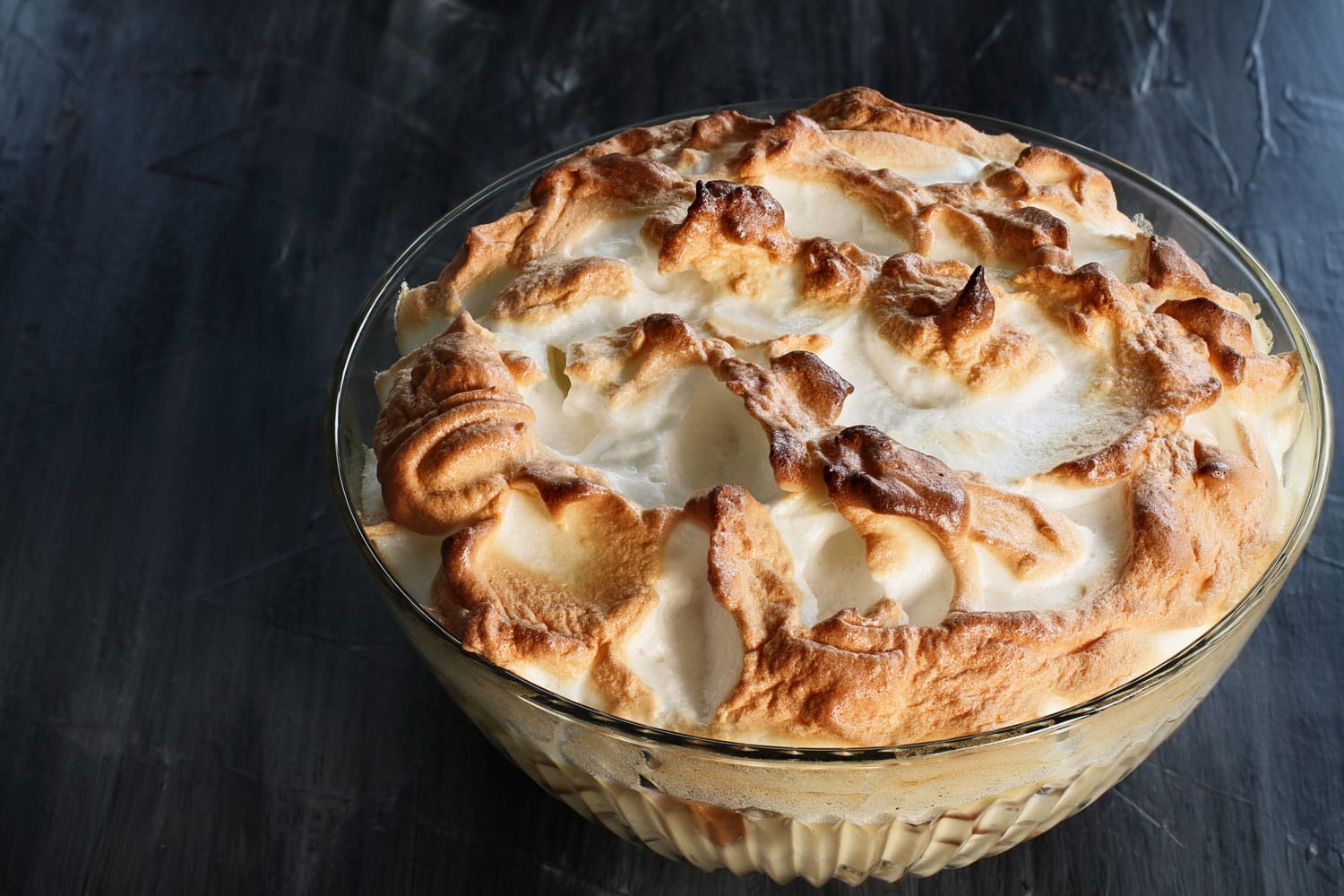 Both whipped cream and meringue make an excellent topping for banana pudding, but they differ in some important ways. Here are a few considerations when choosing which to use:

With meringue, matters get more complicated. There are different kinds of meringue, based on how they're cooked

The most common type of meringue for banana pudding is the French meringue, which is first whisked and then baked. This is the style of meringue used in this great recipe from Back to My Southern Roots.

The Swiss and Italian meringues do not need to be toasted and can stay completely white. However, you can still opt to toast them with a kitchen torch or under the broiler if desired.

This recipe for a boozy banana pudding from The World in Four Days uses the traditional Swiss meringue method.

Do you need whipped cream or meringue for banana pudding?

There is another course of action, unthinkable to some: you could forego a whipped cream or meringue layer entirely. While this may sound like heresy, you may find you enjoy the results.

This recipe from Shugary Sweets fold whipped cream into the pudding mixture but tops the dessert with an extra layer of chessmen cookies instead. It looks great and the top layer of cookies doesn't get as soft as the bottom layer, creating a nice contrast in textures.

Pudding or Custard for Banana Pudding

Living up to its namesake, most banana pudding recipes do call for some variety of pudding or pudding mixture.

But what is in a name? There are many great banana pudding recipes that don't call for pudding at all, and instead use custard.

One other difference between these two is that custard is generally a little thicker than pudding. This is why banana pudding recipes that use pudding often mix it with whipped cream, cream cheese, or some other, thicker ingredient.

How to layer banana pudding in a trifle dish 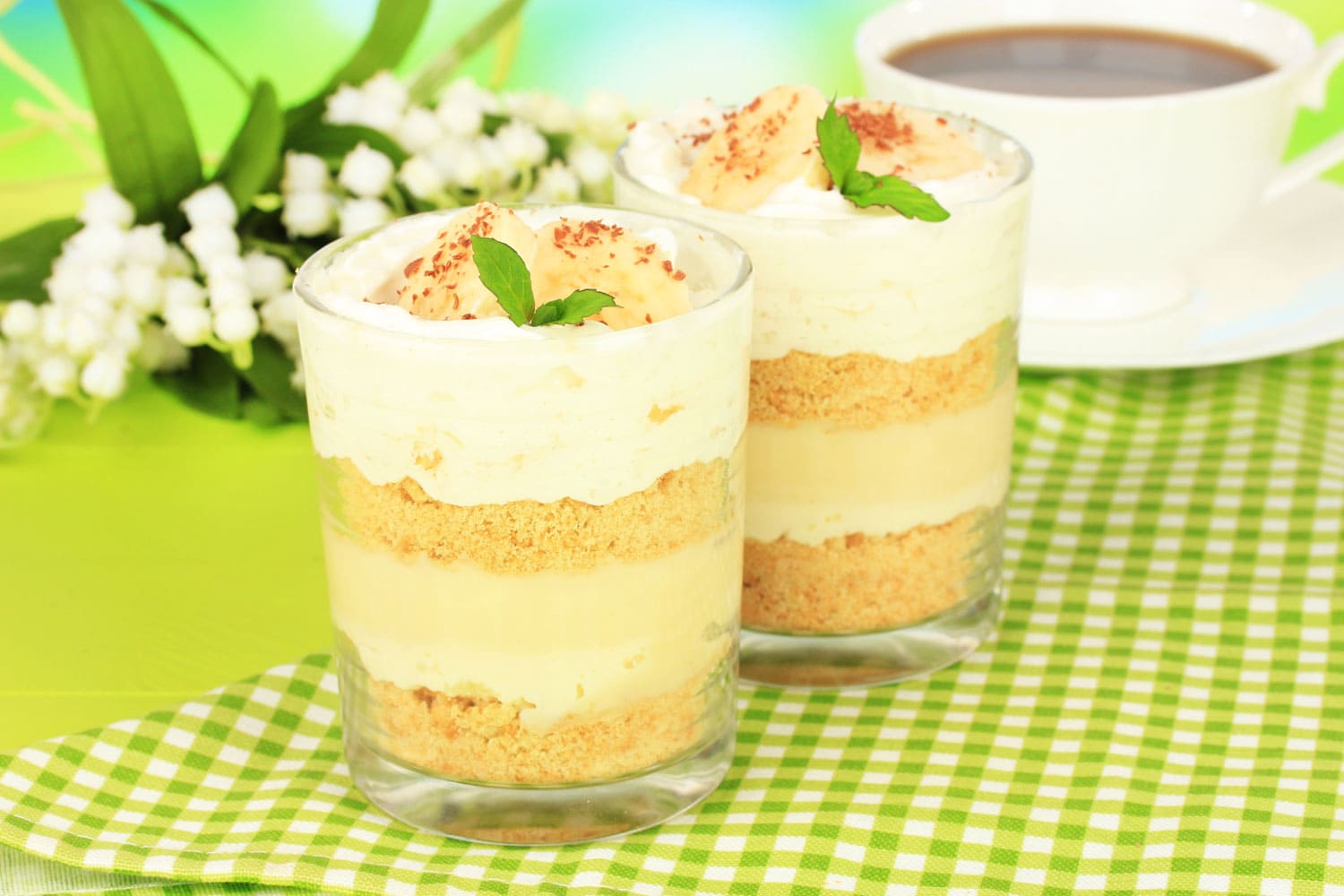 Banana pudding has a few qualities that make it especially popular for large gatherings. Two of these would be that it's relatively easy to make a large portion of it and the layers look lovely enough to be the centerpiece of a dessert spread.

This is especially true if you build your banana pudding in a trifle dish, like the one below.

Click here to see this trifle dish on Amazon.

While the layers that will appear as you put your banana pudding together will be lovely all on their own, there are some ways to up the aesthetic ante.

One way is to add layers of banana slices and cookies facing outward on the glass. You can see this method in the video below from Preppy Kitchen. The video shows a full banana pudding recipe, but the layering begins at 4:28.

How long do you let banana pudding sit?

Banana pudding is traditionally served chilled. Because of this, it's best made ahead of time and kept in the refrigerator until serving.

Generally speaking, you'll want to chill your banana pudding for at least three hours before serving it.

You can keep banana pudding in the refrigerator for three or four days. If you notice any off odors, throw out the pudding.

After the second day, you might notice some browning caused by oxidation. While this isn't dangerous, it does make the dish a bit less lovely to behold. For this reason, we recommend making banana pudding no more than one day before you plan on serving it.

When serving your banana pudding, don't let it sit at room temperature for more than two hours or one hour on a hot day. 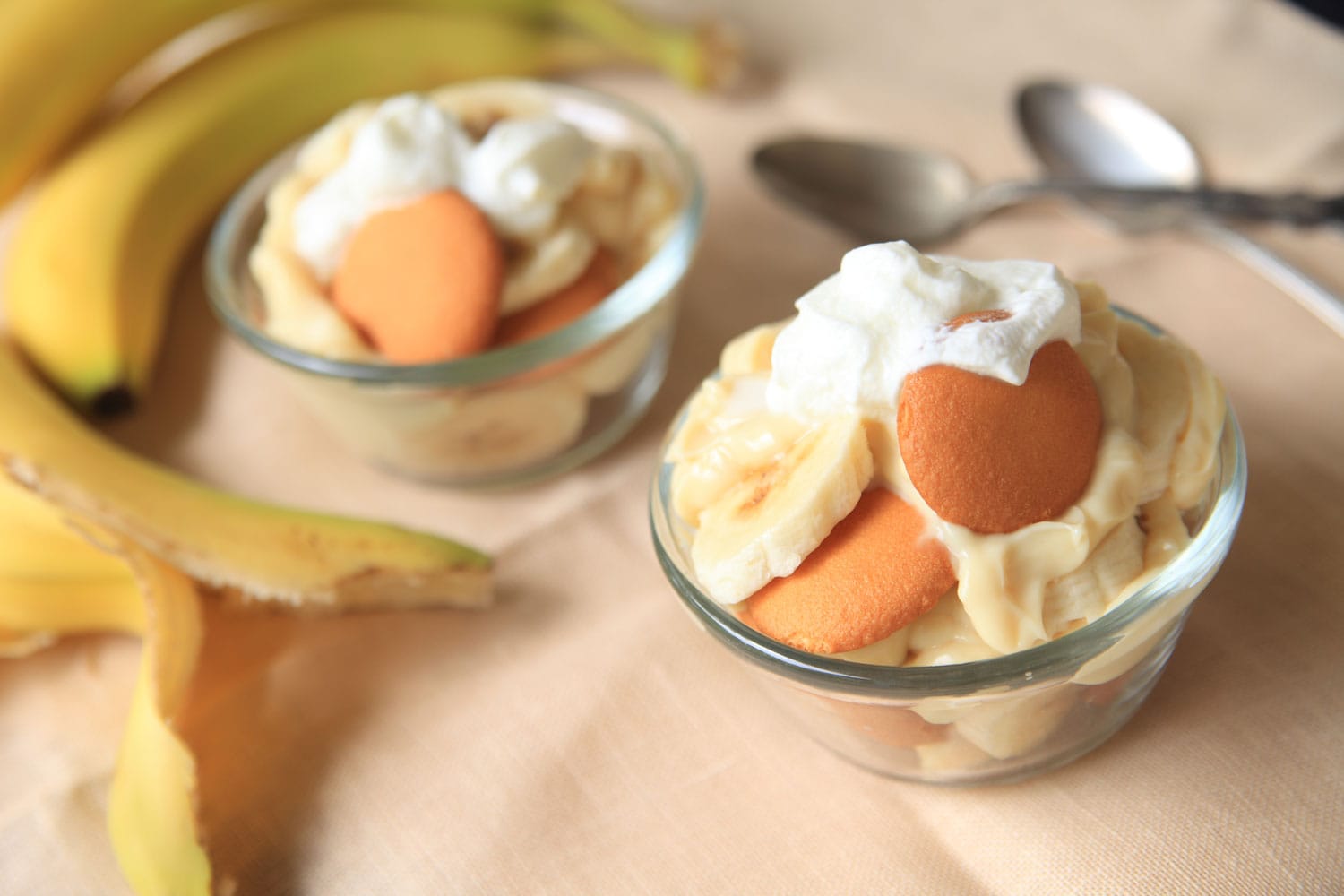 There are many approaches to banana pudding. Some are complex requiring classic techniques for making meringues, custard, and the like.

If you're looking for an easy way to make a layered banana pudding, you only need four ingredients easily found at most supermarkets:

Once you have these, there's only minimal prep involved.

Because the pudding and whipped topping are already cold, you can enjoy this dessert immediately. However, letting it sit for at least thirty minutes will allow the cookies to absorb moisture and flavor, improving the texture and taste of the dish.

You can opt to use a mason jar instead of a bowl when making individual servings. This will allow you to appreciate the appearance of the layers and offers a fun, rustic look. 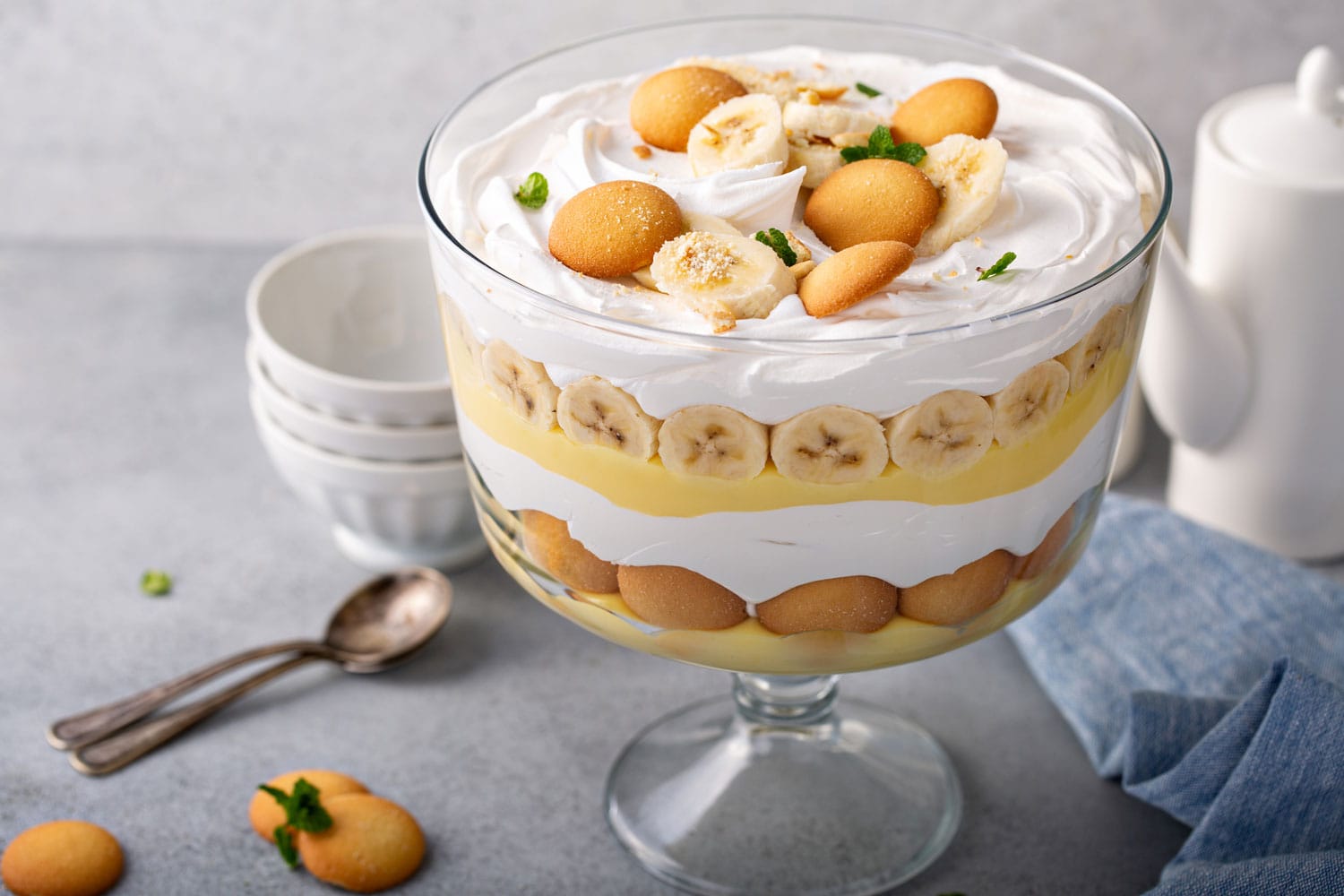 While there are many who will always prefer their grandmother's recipe for banana pudding, we've seen that there are many paths available to reach banana bliss.

Whether you prefer four layers or eight, meringue or whipped cream, custard or pudding, a trifle dish or a mason jar, banana pudding should have a home in your dessert repertoire.

How Many Layers in Tiramisu? [And How to Make One]

What Dessert Goes with Fried Chicken?

Satin Icing Vs Buttercream: Which Frosting To Choose?