Is your French onion soup coming our thicker or thinner than you anticipated? If so, you're probably wondering whether French onion soup should be thick or thin. Well, you've come to the right place, we've done all the research to provide you with guidance on the texture of your soup.

The broth in French onion soup should have a mostly thin consistency with slivers of caramelized onion throughout that make it seem slightly thicker. 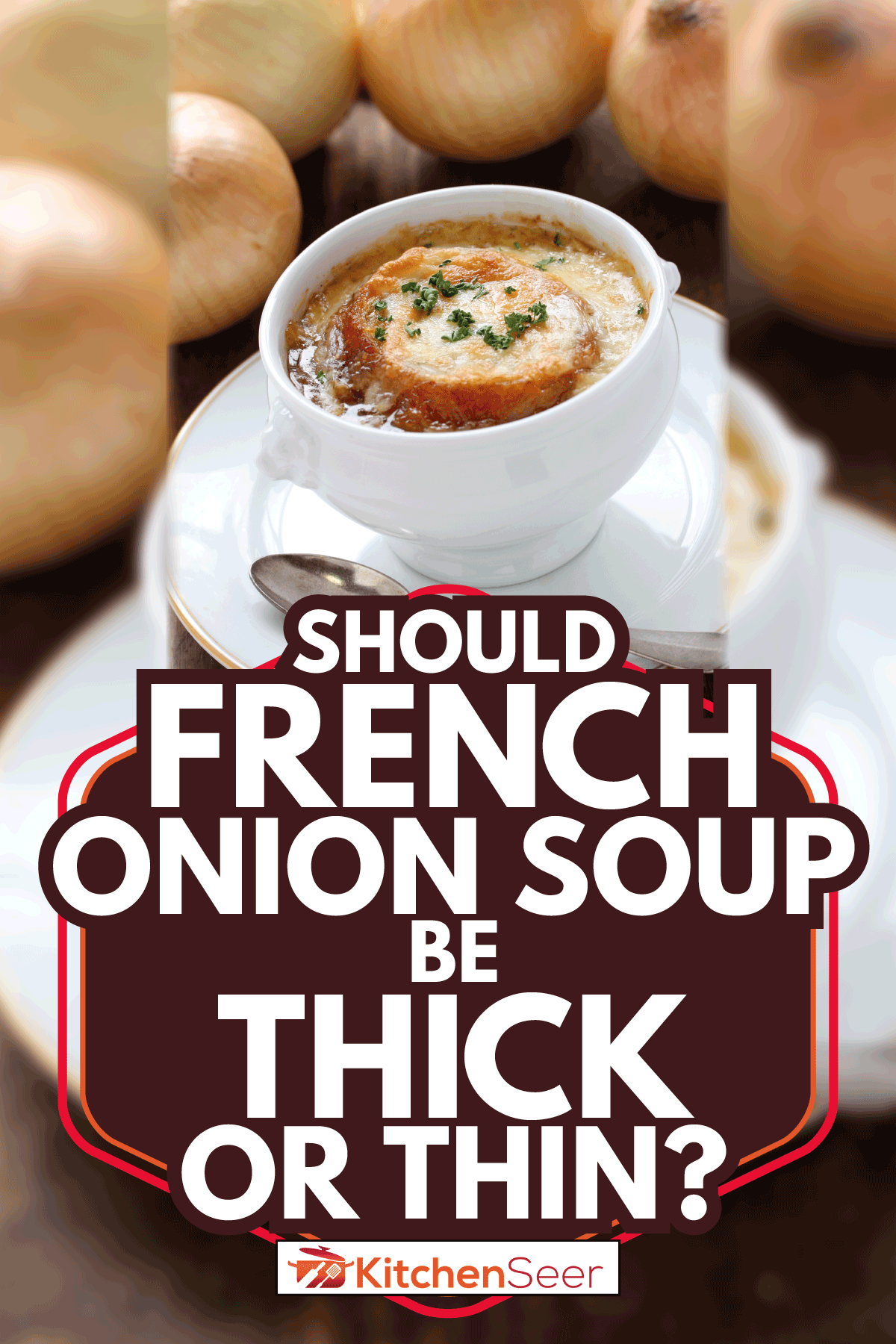 What Texture Should French Onion Soup Have?

The broth in French onion soup will be fairly thin in comparison to cream-based soups. It should have a slightly thicker consistency than chicken noodle soup, but it will be far thinner than a chowder or bisque. The onion will be soft, flavorful, and a bit transparent with a rich brown color.

Although the soup's broth is actually thin, the abundance of tender onion in the soup makes it seem slightly thicker. The amount of onion contained in French onion soup makes it hearty and filling, even with its thin broth. 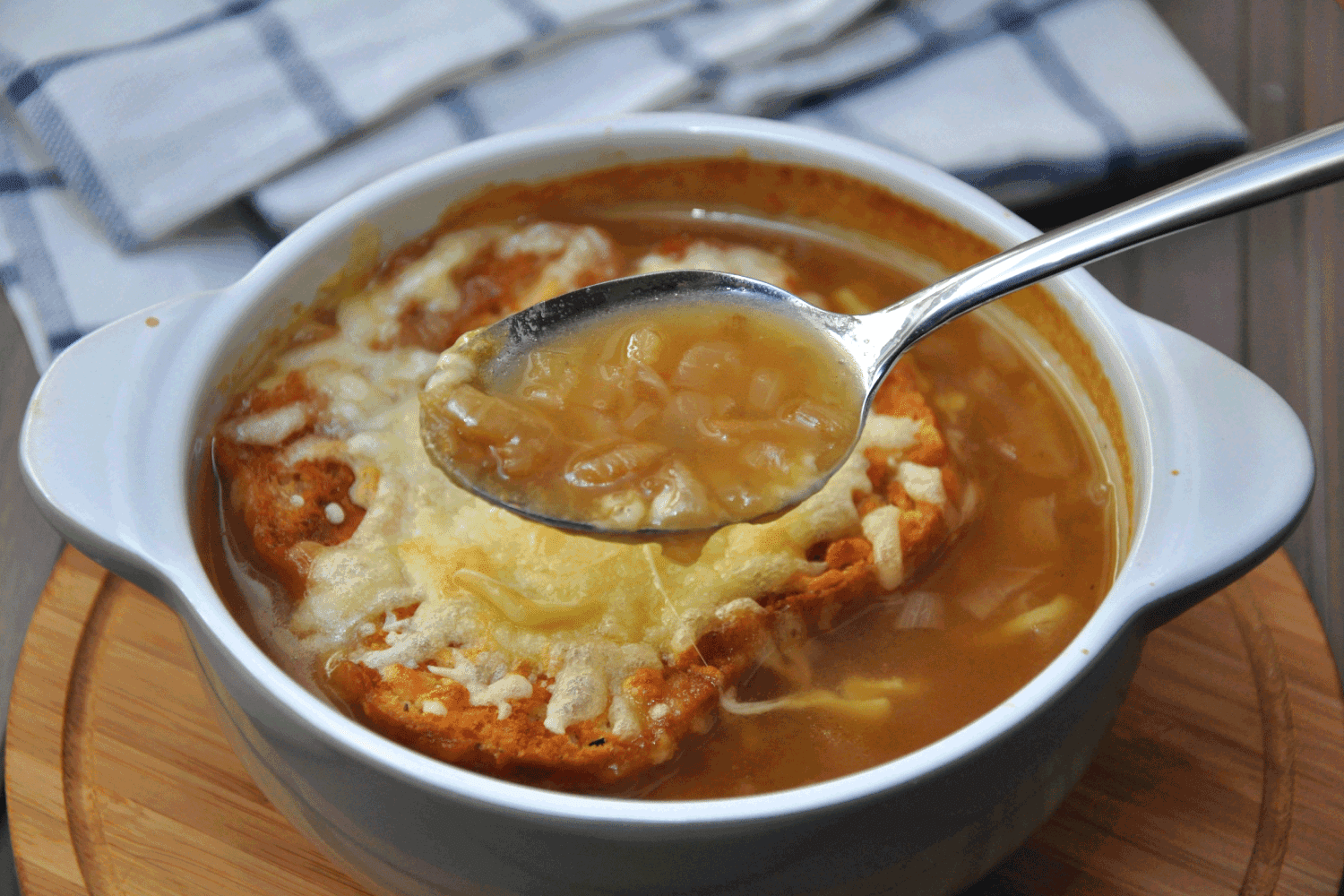 How To Thicken French Onion Soup?

Flour is the best way to thicken French onion soup without affecting the flavor of the soup. Here's a quick step-by-step guide for two methods that will help you thicken your soup effectively:

How To Thin Out French Onion Soup?

For a thinner French onion soup leave out any flour. If you already added flour and it came out a little too thick for your liking, add a little more broth until you find a nice texture and taste. Always add a little at a time to avoid causing more harm to the dish. 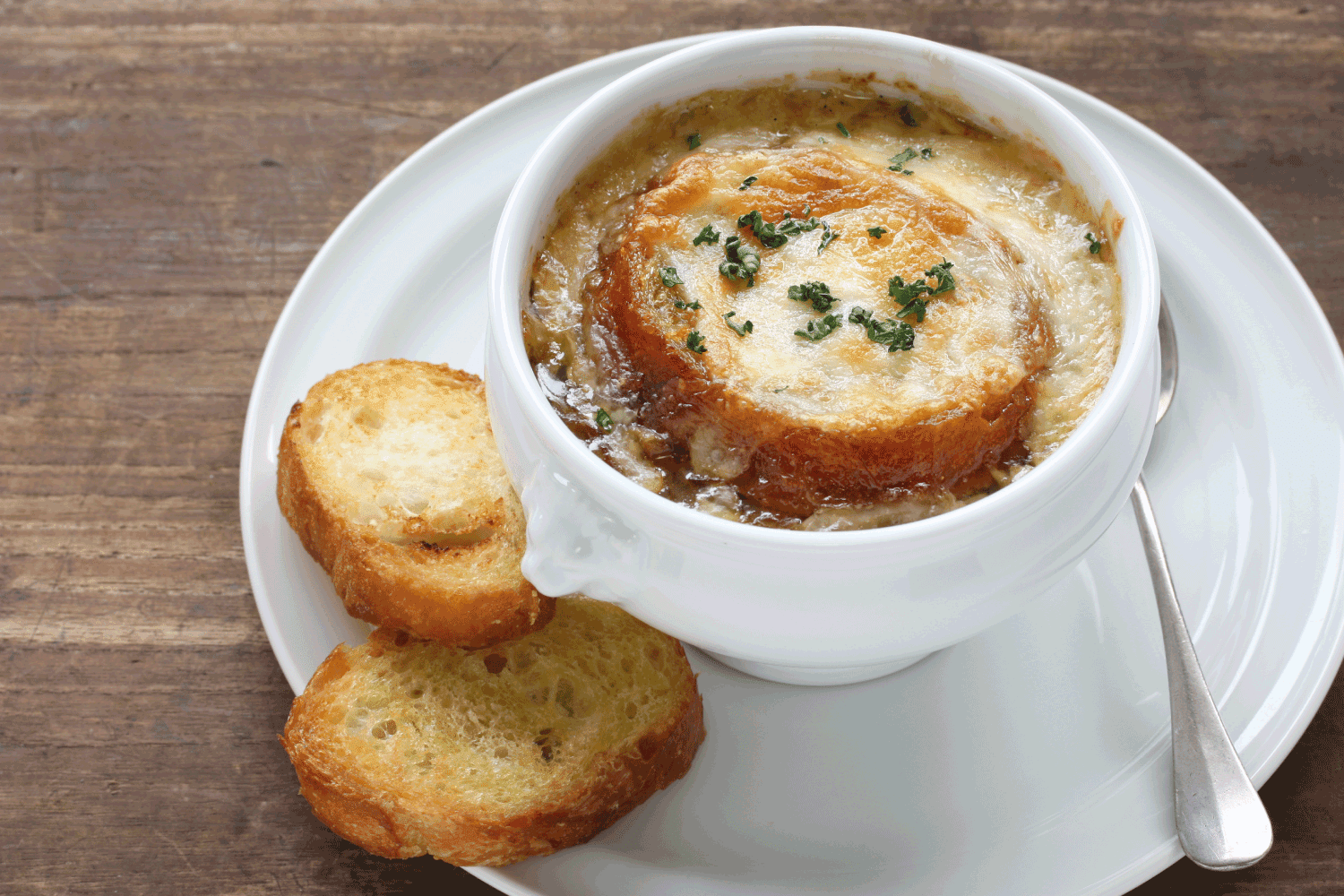 How Do You Fix French Onion Soup That Is Too Sweet?

Most of the ingredients used to create French onion soup contain sugar, which can result in a soup that seems far too sweet. To fix a soup that turned out a little too sweet, try adding salt to the pot, just add a pinch at a time and taste the soup between additions so you don't overdo it. To avoid an overly sweet soup on your next attempt, try using a less sugary wine or stock option.

How Do You Fix French Onion Soup That Is Too Salty?

If your French onion soup came out a little too salty, try adding a squeeze of lemon juice to even out the flavors. Acidic ingredients like lemon, lime, and vinegar will work to balance out the salty taste. Add a little at a time and taste between doses to ensure you don't add too much.

How Do You Fix French Onion Soup That Is Too Bland?

If your French onion soup came out a little too bland, try adding a pinch of parsley and a dash of minced garlic. Let it simmer for a minute to infuse the flavor into the broth and give it a taste before adding more. In future attempts consider caramelizing the onion a bit longer to bring out the full flavor in the soup.

What Can Be Used Instead Of Gruyere Cheese In French Onion Soup?

If you are lacking Gruyere, Swiss cheese is a great substitute. Mozerella and any cheese that melts well, with a slightly stringy texture will work for French onion soup, but the flavor is a factor to keep in mind. For an exciting new twist try using more than one kind of cheese on top.

How Do You Melt The Cheese On Top Of French Onion Soup?

To melt the cheese on top of your soup, you will need oven-safe crocks no larger than 18 ounces. If the crock is too large the cheese will fall to the bottom of the bowl when it melts causing a less desirable appearance. Here is a step-by-step guide to help you melt your cheese perfectly:

These bowls are specifically designed to be the perfect size for French onion soup.

What Kind Of Bread Should Be Used On French Onion Soup?

Traditionally French bread is best on French onion soup, and this is the most common and most popular option. You can try different kinds of bread on top, garlic bread is another popular option that some recipes call for. Try to find a nice crusty bread that can hold up to a little moisture.

Should Bread Be Toasted For French Onion Soup?

Yes, you should lightly toast your bread before placing it on top of the soup and covering it with cheese. Don't brown it otherwise you risk overcooking it when you place it under the broiler later on. Just a minute in the oven should be all it needs, enough to give it a firm feeling on both sides so it holds up well on the soup. 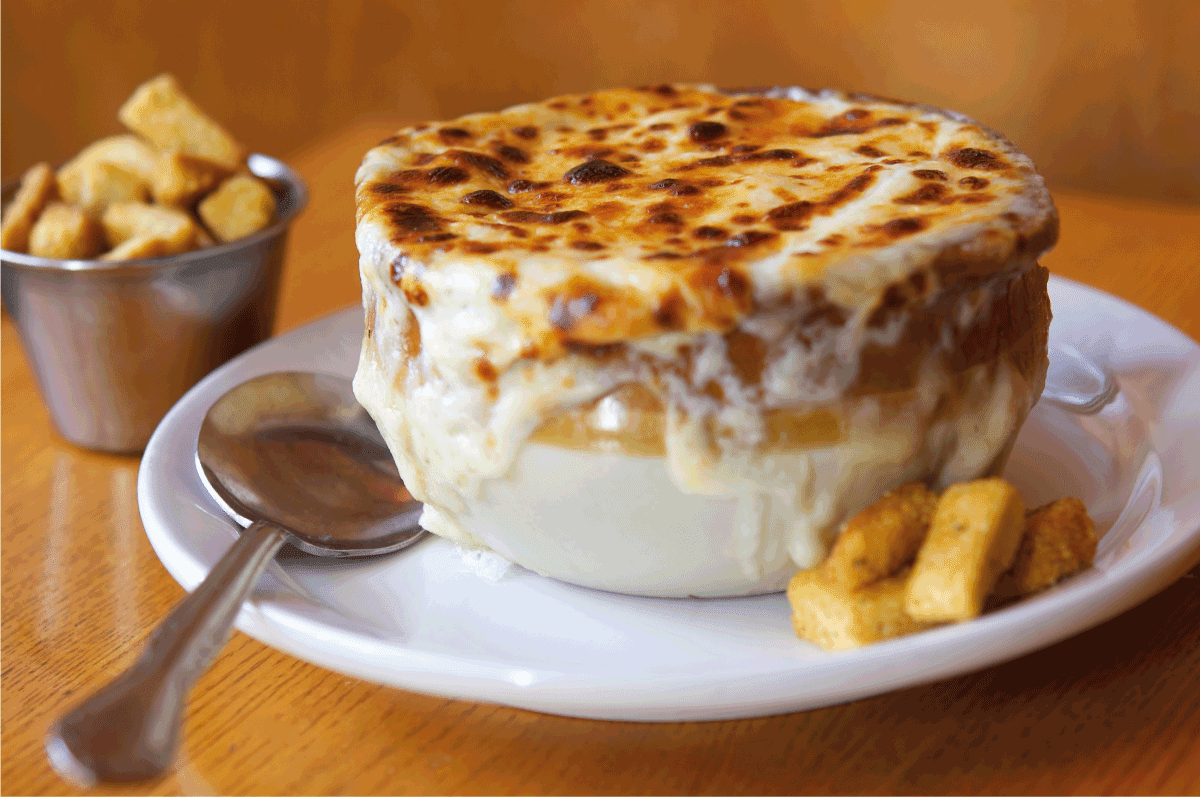 What Is The Difference Between Onion Soup And French Onion Soup?

French onion soup is always made using beef stock or broth, like in this recipe. You can make onion soup with a variety of broth flavors like chicken or vegetable stock, but that is the only difference between the two. Using vegetable broth to make onion soup is a great way to make the recipe fit into vegan and vegetarian diets.

This vegetable stock is certified vegan, making it the perfect choice for a vegan and vegetarian safe French onion soup recipe.

Is Dry Onion Soup Mix The Same As French Onion or Onion Soup?

Dry onion soup mix commonly found in boxes at the supermarket is very similar to onion soups. Lipton's website even has a recipe with instructions on using their boxed onion soup mix to make French onion soup.

What Kind Of Onion Should Be Used For French Onion Soup?

Yellow onion is the most common variety for this recipe, but you can use any type of onion or even a mix. Different onion species will result in different tastes, red onions will result in a stronger onion taste, while white onions will create a mild flavor for your soup. You can even experiment by adding shallots into the mix as well.

How Should The Onion Be Cut?

Start by cutting off both ends of the onion and disposing of them, you can peel them before or after this step. Cut each onion in half lengthwise and place the flat end of each half-onion down against the cutting board. Begin cutting from one end to the other, resulting in long slivers of approximately 1/4-inch thick onion.

Now that you know the perfect texture for French onion soup, you're ready to start cooking.  Don't be afraid to try out new ingredients to make an onion soup, and trying new cheeses can result in new favorite recipes. Enjoy your delicious meal and remember to have fun!

To learn more about the perfect ingredients to use in your soup, read our article "What Onion is Best For Soup?"

For help finding the best tools to make soup with, read our article "Stock Pot vs. Soup Pot – What’s the Difference?"

Can You Place Pizza On Oven Rack?

Should You Peel And Cut Potatoes Before Or After Boiling?

Can You Cook With Red Onions?