Besides the age-old "fruit vs. vegetable debate," a common question in the tomato community is whether to place these plump red gems in the freezer. Considering tomatoes have a relatively short shelf life, it's no wonder people are curious about freezing them at peak freshness. If you're thinking about chilling your fresh tomatoes, then you've got to check out this post. Below, you'll see all the research we've done on how tomatoes fare in the freezer.

It's safe to put tomatoes in the freezer for long-term storage. Whether you want to preserve your tomatoes whole, chopped, or as a sauce, you shouldn't have an issue putting them in the freezer wrapped in Ziploc bags or freezer-approved containers. Just keep in mind that these tomatoes will be extra mushy after they thaw. This makes frozen tomatoes best-suited for cooking applications rather than eating raw.

While it's safe to store tomatoes in the freezer, there are a few caveats worth mentioning. Please keep reading to learn the dos and don'ts of freezing Italy's favorite fruit (or veggie?). 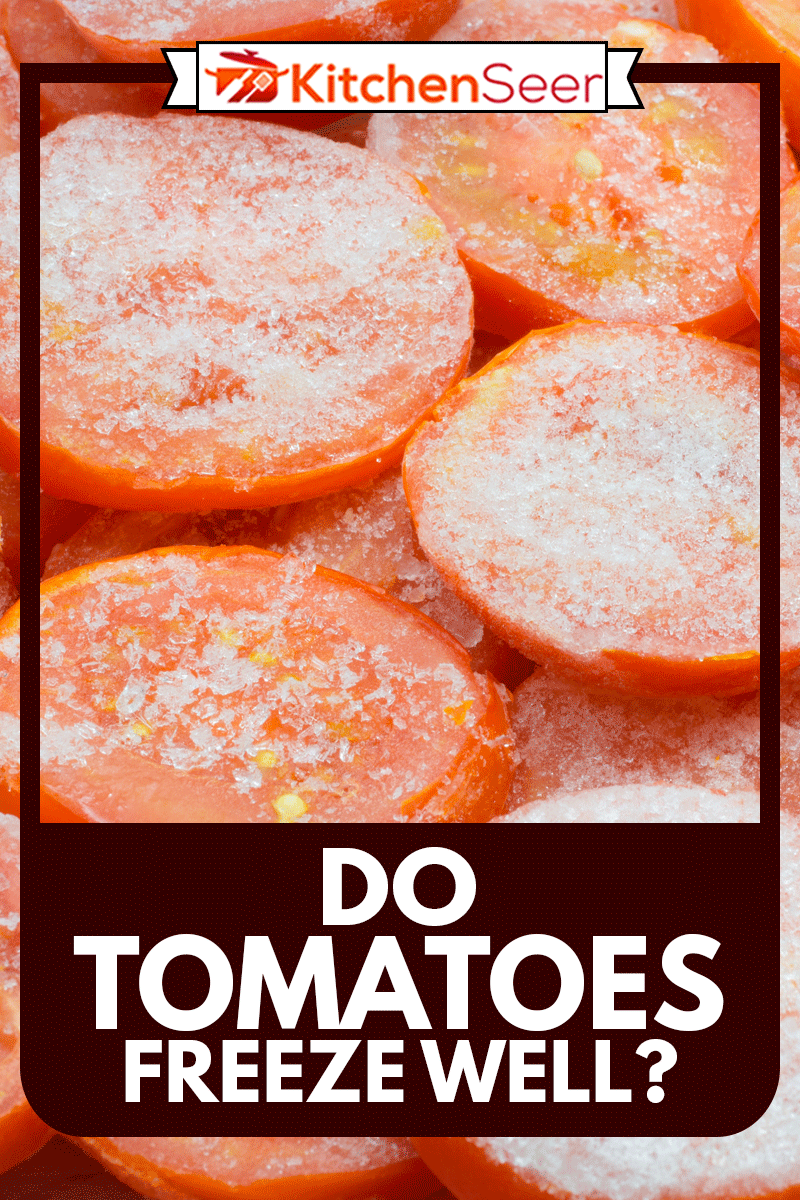 Can You Put Tomatoes In The Freezer?

According to nutritionists at the University of Nebraska, it's safe to freeze tomatoes. It doesn't matter what type of tomato you prefer; as long as you put them in a freezer-safe bag or container, you can place them in your freezer.

Just be sure to wash, dry, and hull your tomatoes before putting them in the freezer. If you don't already have a tomato huller, you should consider buying one to save some time—especially if you buy a boatload of tomatoes. 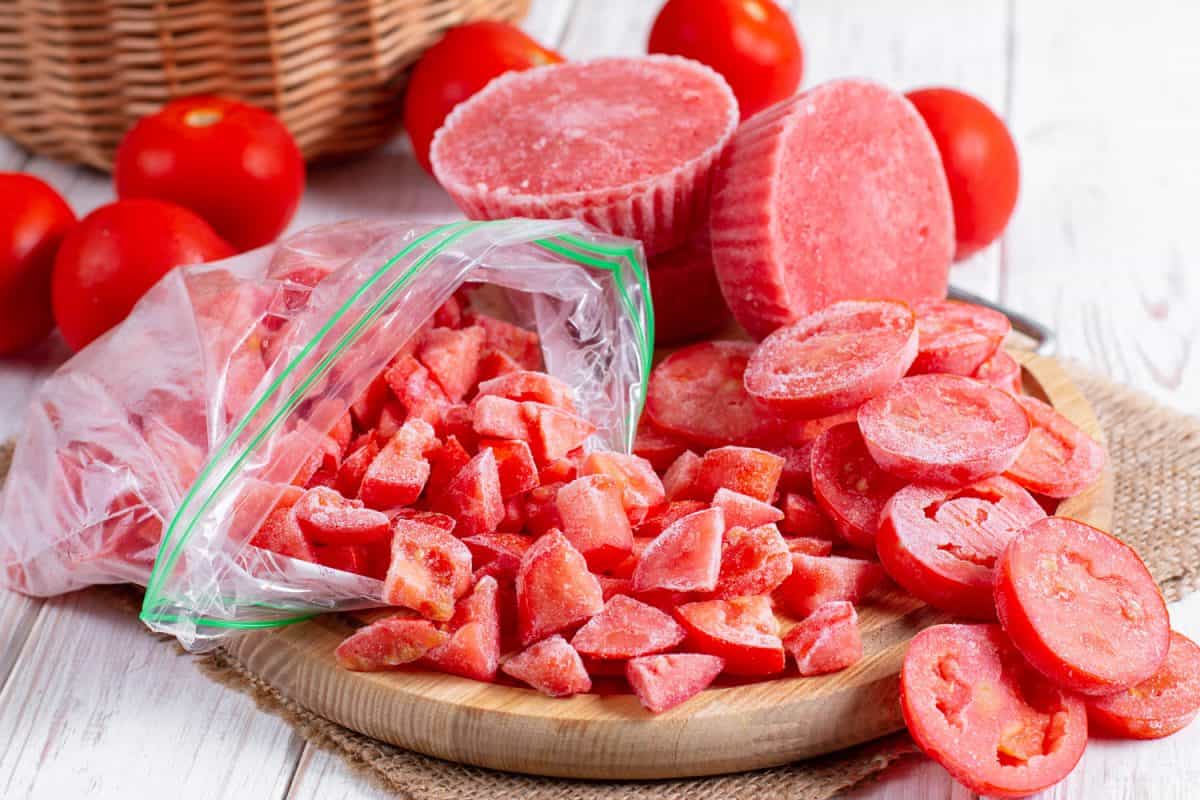 For more tips on how to properly freeze tomatoes, you could watch this video put out by the University of Maine:

Can You Freeze Whole Tomatoes With Skin On? 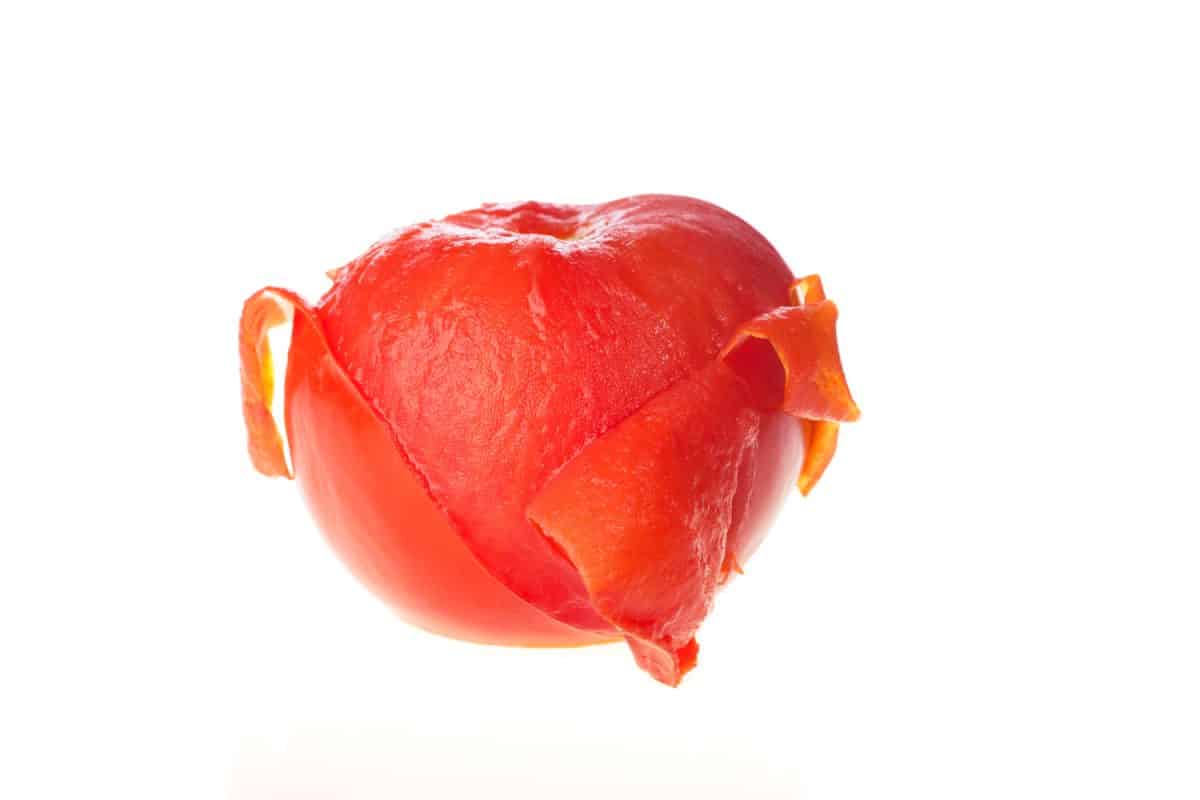 That being said, there's nothing wrong with freezing tomatoes with the skin on or off. Just be sure to wash and dry your tomatoes thoroughly before putting them in the freezer.

Do You Need To Blanch Tomatoes Before Freezing Them?

Although blanching is a requirement when freezing most veggies, it's not necessary with tomatoes. After all, tomatoes are technically fruits!

However, if you like storing tomatoes with their skin off, you may want to consider blanching them in hot water before storing them. The easiest way to blanch cored tomatoes is as follows:

If you'd like a visual explanation on blanching tomatoes, be sure to check out this YouTube video:

What Is The Best Way to Freeze Fresh Tomatoes? 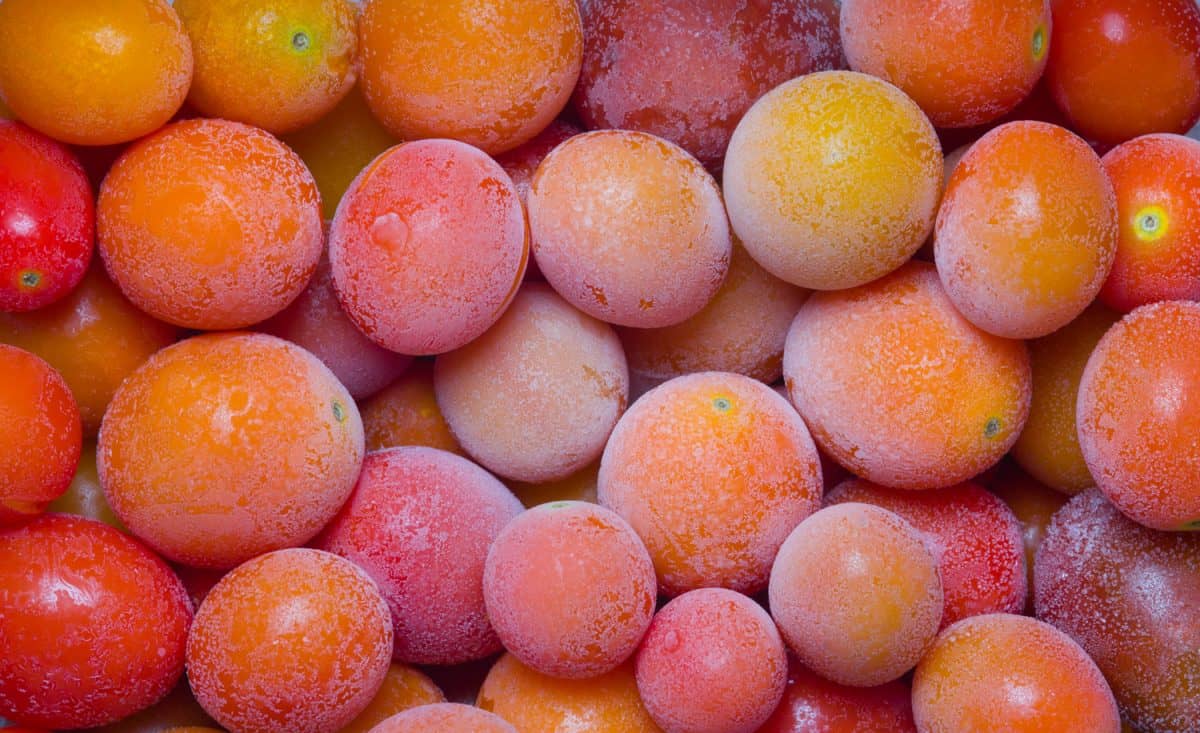 There are many ways you could freeze fresh tomatoes, but the easiest method is as follows:

As hinted above, this is just one of many ways you could safely store fresh tomatoes in the freezer. For instance, some people prefer using freezer-safe glass containers for their tomatoes. Other people like to chop, dice, or puree their tomatoes before they freeze them. All of these methods are acceptable, provided you're using freezer-approved bags or containers.

If you need a refresher on using Ziploc bags in the freezer, then be sure to read this KitchenSeer post on "Ziploc Bags For Food Storage."

What Are The Best Uses For Frozen Tomatoes? 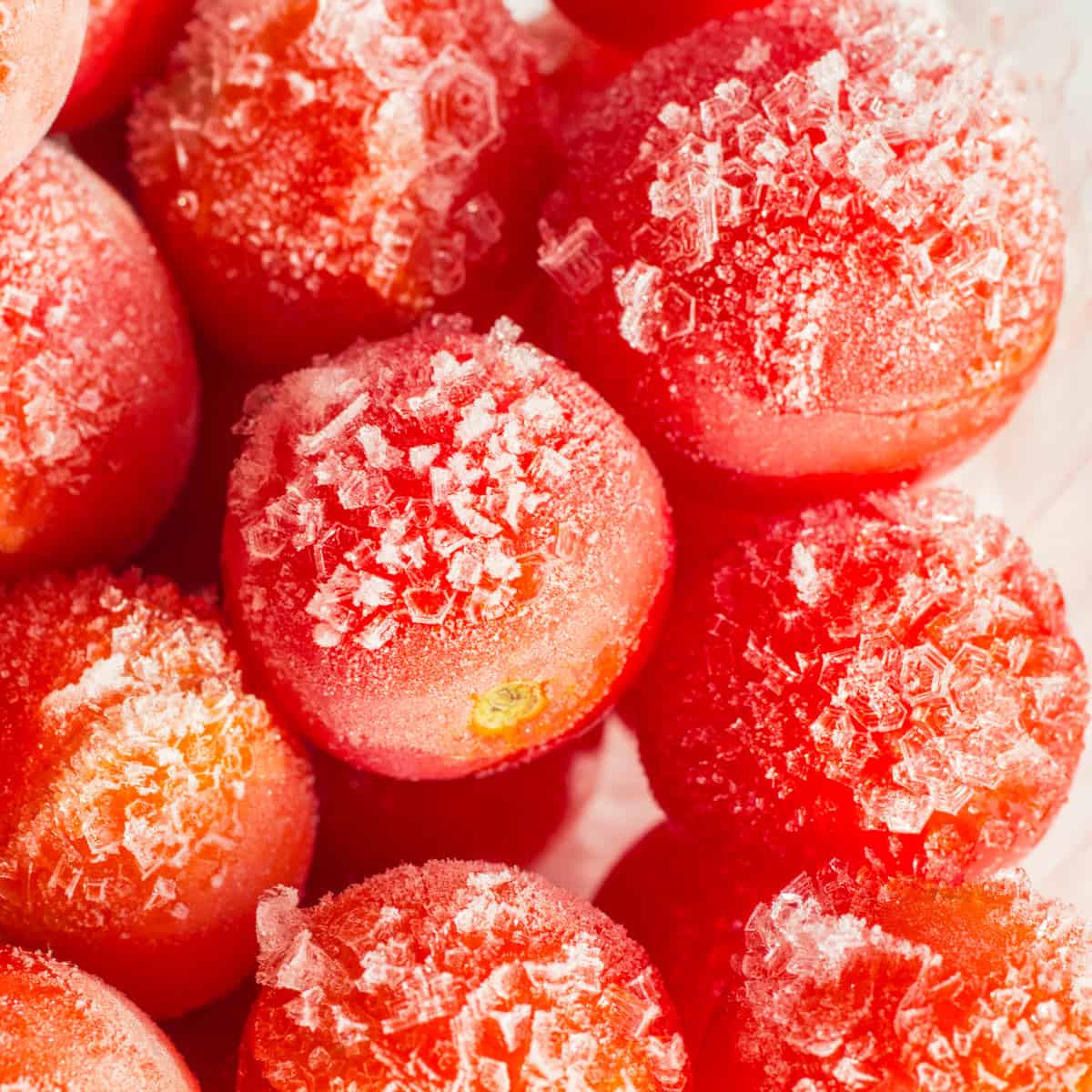 The best way to put frozen tomatoes to good use is to cook with them. Whether you like soups, stews, or sauces, frozen tomatoes are a great way to create a flavorful dish with little fuss.

The reason frozen tomatoes are best in cooked applications has to do with their texture. After they thaw, your tomatoes will be mushy and extra watery. While this may not look as tasty as a plump, fresh-picked tomato, it still has plenty of flavors to impart in many hot recipes.

By the way, if you're going to use your frozen tomatoes in a delicious red sauce, you've got to check out our post on "Putting Tomato Sauce In Stainless Steel Bowls."

Can You Eat Frozen Tomatoes Raw? 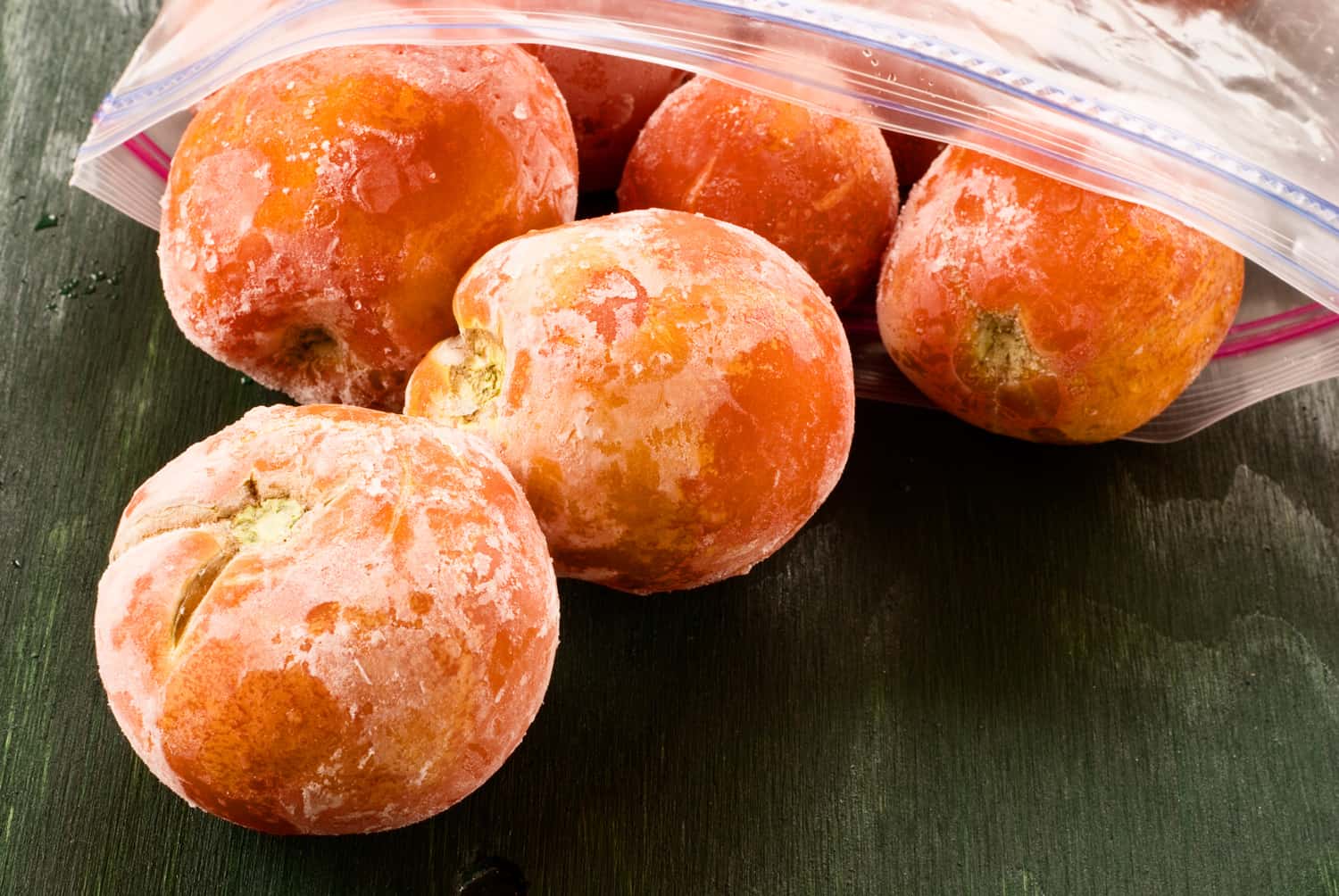 Please only use the freshest tomatoes at your grocery store if you want to eat them raw.

Can You Freeze Tomatoes Before Making Salsa?

You could see how one YouTuber uses frozen tomatoes to make salsa in this video:

According to most produce experts, freezing tomatoes diminishes their flavor profile. When tomatoes are stored at temps below 50° F, it tends to deactivate all of their naturally-occurring enzymes. These compounds are most responsible for the tomato's acidic flavor, which is why your frozen tomato may taste a bit dull compared with a fresh-picked cultivar.

However, these flavor effects aren't as pronounced if you mix your frozen tomatoes with other seasonings and spices. Plus, since you won't be eating these tomatoes raw, it's unlikely you'll notice a significant impact in whatever soups or sauces you whip up.

Just be sure to use frozen tomatoes within about eight months to enjoy their peak flavor profile.

How Long Can You Keep Fresh Tomatoes In The Freezer? 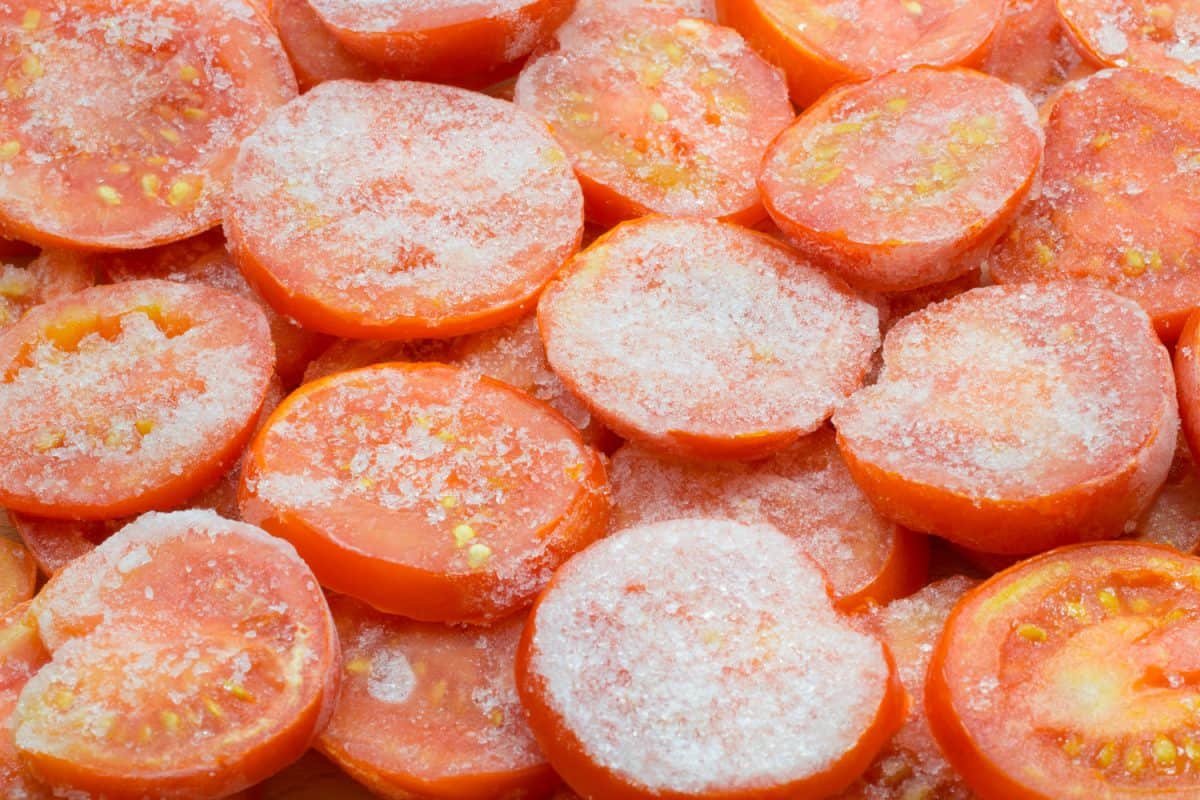 Now that you've got your tomatoes in the freezer, you may be wondering how long they'll last. In general, frozen tomatoes should retain their peak flavor for about six to eight months.

To keep track of your tomatoes' freshness, be sure to label your Ziploc bags with the date you put them in your freezer. Alternatively, you could buy a handy kitchen pad to record all of the items currently in your freezer.

While freezing tomatoes has some tradeoffs, it's a great option if you've got too many of these red guys lying around. True, freezing may dampen your tomatoes' flavors, but that doesn't mean you can't use these frozen goodies to make red sauces, stews, and salsas. Just be sure to wash, dry, and core your tomatoes before putting them in a freezer-safe bag. As long as you follow these tips, you can enjoy these frozen tomatoes months after storing them.

How Long To Fry French Fries?

Can I Grind Cocoa Beans In A Coffee Grinder?