Roasted tomatoes add an extra special flavor to nearly any dishes they are paired with. Tomato sauces, salads, and hot dishes all exude a bit more flavor from the zesty undertones of roasted tomatoes. Perhaps you have wondered how to roast tomatoes in your kitchen. What methods are best for home cooks? We've researched these questions and have found helpful answers for you.

When roasting tomatoes, there are several variables to consider: the variety of tomato, roasting method, and type of oven. Generally, it takes about 20-25 minutes to fully roast tomatoes in a conventional oven. However, caramelized tomatoes or recipes with additional ingredients will require approximately 30-35 minutes.

Are you interested in learning more about roasting tomatoes? Curious about the array of options that exist to accomplish this tasty culinary task? Ever wondered if you have to core the tomatoes or remove their skins? Are cherry tomatoes a viable option for roasting? Please continue reading as we delve further into these interesting culinary topics! 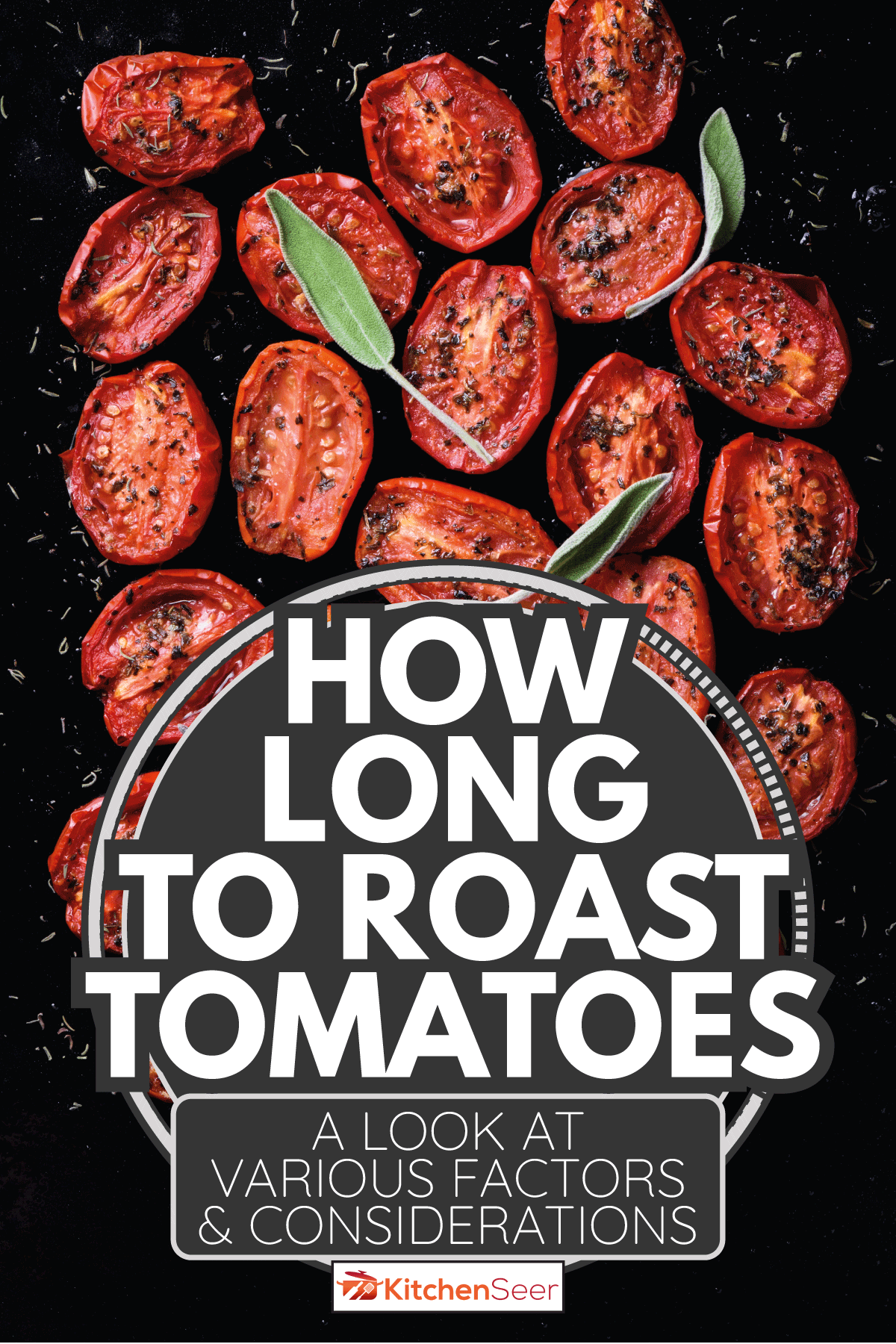 How long do you roast tomatoes to roast the skins?

Roasting tomatoes is an art, and like most arts, it requires a bit of practice to master. However, there are several guidelines to follow that will ensure a successful batch of oven-roasted tomatoes. The amount of time required to roast the skins will vary between varieties of tomatoes and oven temperatures. 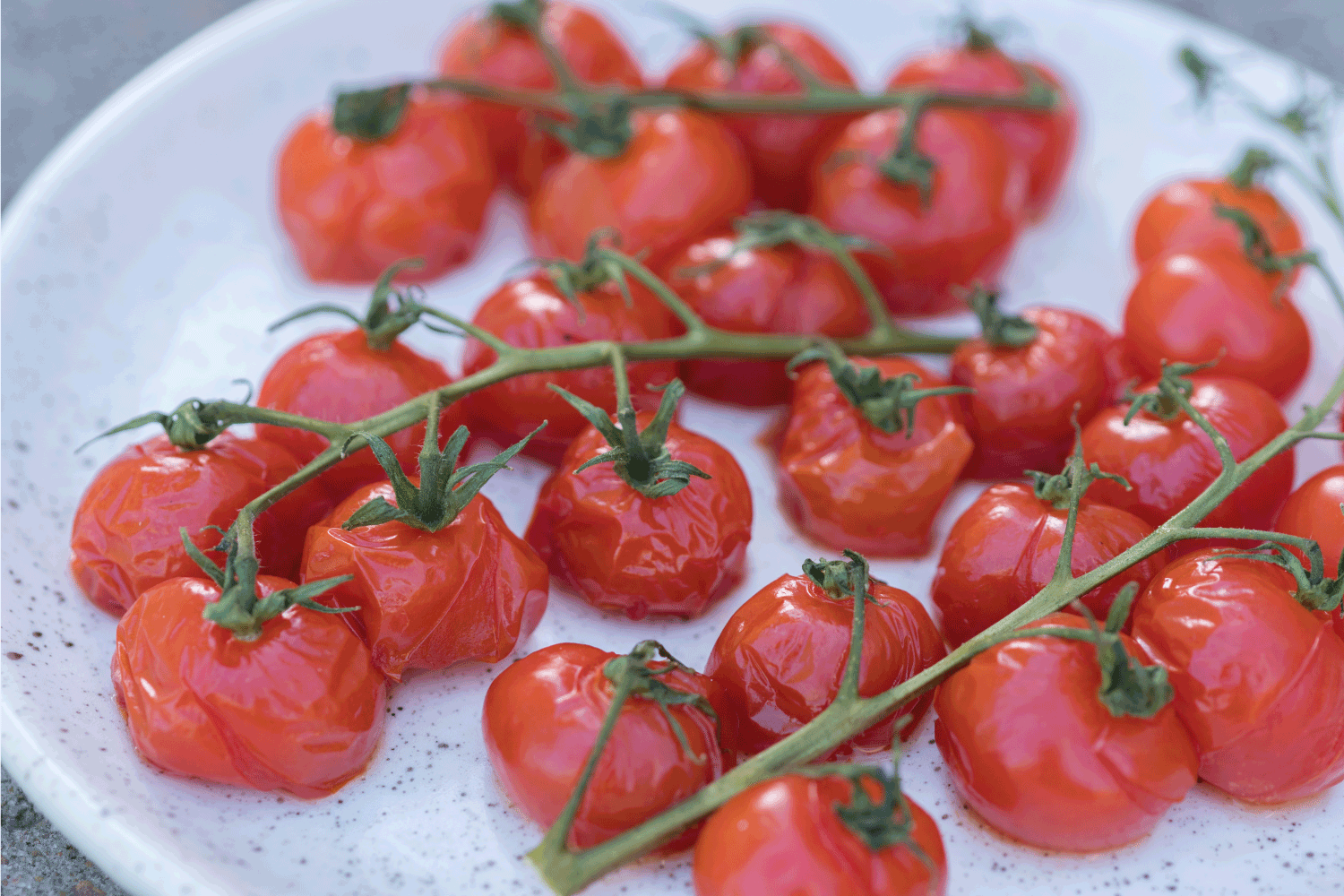 Roasting time will vary depending on the size of the tomatoes and the level of water they contain. Tomatoes containing ample seeds and water will need more time to roast. For example, roasting medium to large tomatoes cut into slices will require about ten to fifteen minutes at 350 degrees Fahrenheit. Roma tomatoes have fairly tough skins, and these usually require 40-45 minutes at 400 to roast in the oven. 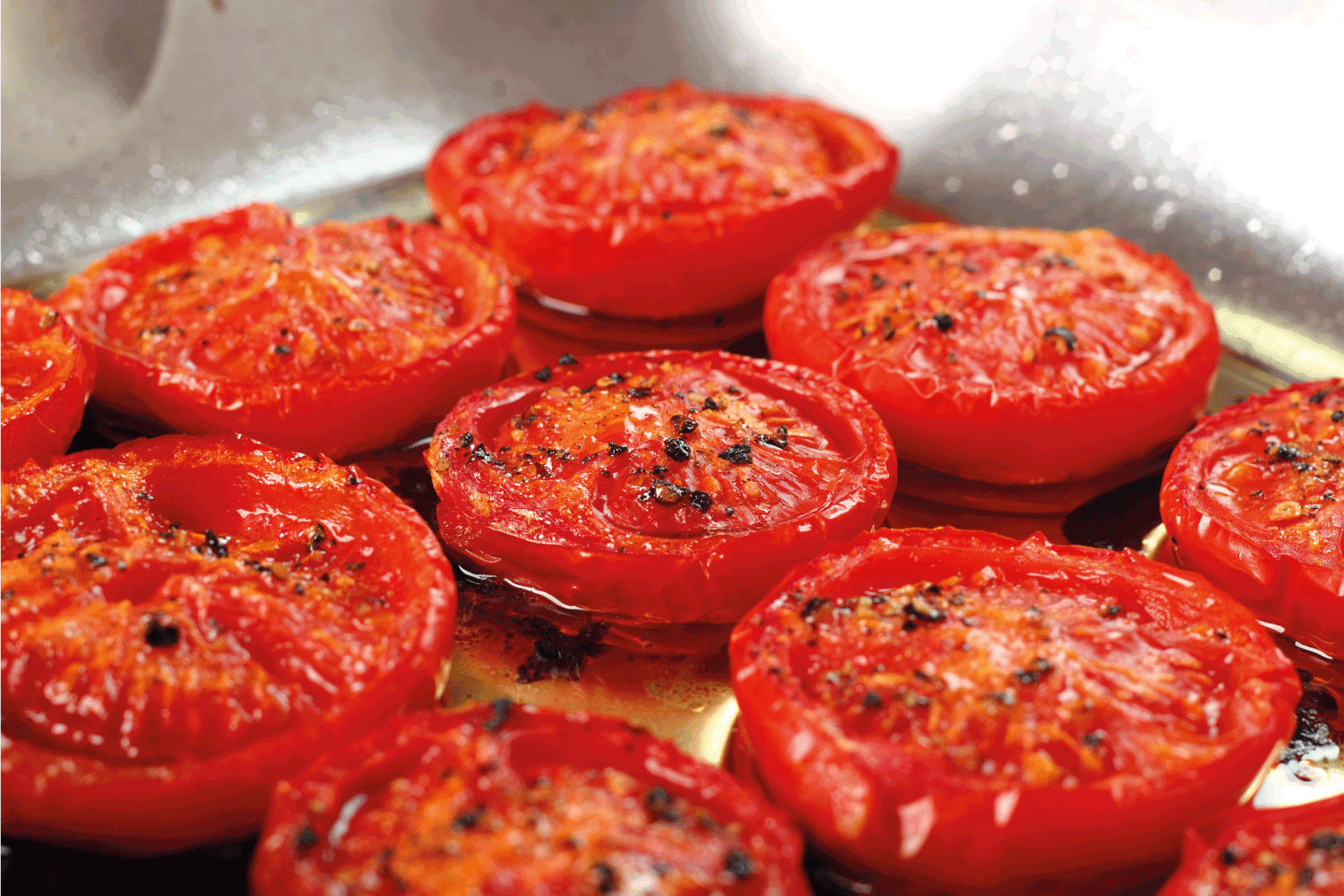 Word of advice: if the tomatoes are watery, roast for the suggested amount of time. Then, remove the tomatoes from the oven and cut one of the tomatoes, let it cool for a bit and taste it. This will help you determine if the tomatoes need a few more minutes in the oven or if they are ready to go!

Wondering how tomatoes differ between varieties? Click here to read our article that delves into this topic.

How long to roast cherry tomatoes? 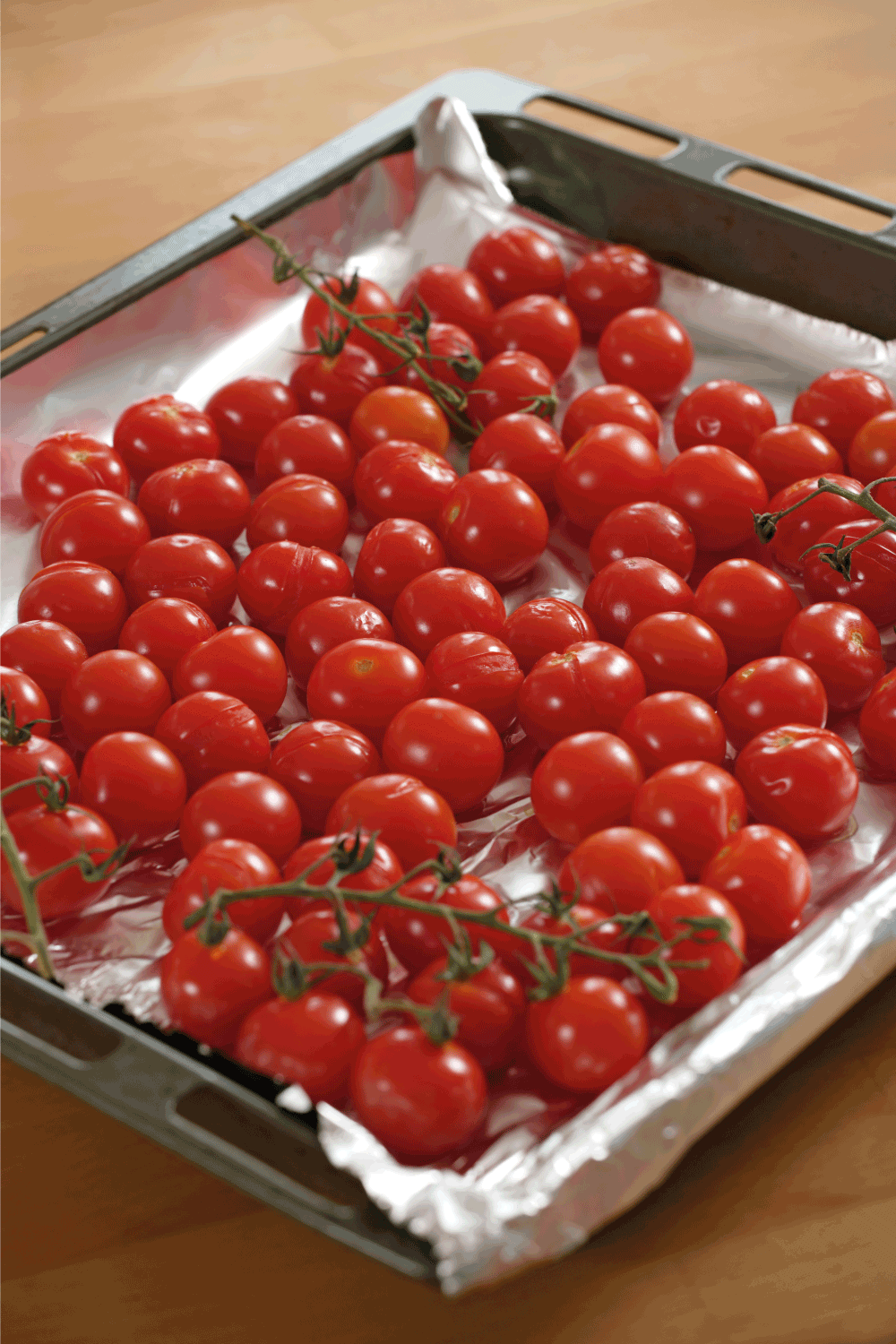 Roasting cherry tomatoes are great for adding to dishes, such as Italian pasta, chef salad, tomato sauce, and more. The process is comparable to roasting larger tomatoes. Start with washing the cherry tomatoes with cold water and remove the stems. Then, set them in a colander to drip dry for about five to ten minutes before moving on to the next steps.

Place the washed cherry tomatoes into a large mixing bowl and add one tablespoon of olive oil per pint of cherry tomatoes. Add herbs and spices for taste if you so choose. Next, place the cherry tomatoes onto a rimmed baking sheet to prevent them from rolling off the sheet in the oven.

Roasting cherry tomatoes at 450 degrees Fahrenheit requires about 20-25 minutes of baking time. Once the cherry tomatoes are ready to be removed from the oven, they will start to burst and the skins will show visual signs of blistering and roasting. Remove from the oven and allow the tomatoes to cool in a well-ventilated area in the kitchen.

How to roast tomatoes on the stove?

Begin with allowing an iron skillet to heat to the point of smoking on the high heat setting on the stovetop. Next, add the tomatoes to the dry, hot pan and cook for three to four minutes while turning the tomatoes at least once per minute to char each side of the tomatoes. Then add onions, spices, salt, and vinegar. Allow the ingredients to cook for about four to five minutes or until the onions are fully cooked and soft. Remove from the stove and enjoy.

Have you wondered how long tomatoes can last in the refrigerator? Check out this post: Do Tomatoes Last Longer In The Fridge?

Can I roast canned tomatoes?

Absolutely. In fact, there are several Italian or American-Italian recipes that call for roasted canned tomatoes. The process is fairly simple. Start by draining the canned tomatoes. Empty the can of tomatoes into a colander and allow the tomatoes a few minutes to drain into the sink.

Line a baking sheet with aluminum foil or parchment paper. Add spices and olive oil if inclined and place the tomatoes onto the sheet. Do not stack the tomatoes, single layer only. The tomatoes need ample airflow to roast. Bake at 300 degrees F for two to two and a half hours. Turn the tomatoes at least every half hour to ensure even baking.

Are you interested in learning a few new methods for dicing tomatoes? Click here to read our article solely devoted to this topic.

Should you core tomatoes to remove the skins?

Suppose you are making sauces or soups, then removing the inner seeds and exterior skins is paramount for creating a robust flavor with a smooth consistency. However, if you are roasting tomatoes for adding to a pot roast, goulash, or pasta dish, leaving the core and skins would add flavor and texture to the dish. Also, leaving those vital parts of the tomatoes adds nutritional value and reduces food waste.

To remove the core and skins, start this process by filling a large pot with water on the stovetop to boil while you wash and remove the cores of the tomatoes.

How do you know when tomatoes are done cooking?

There are a few variables to consider when examining roasted tomatoes. These include the type of tomatoes, cooking medium, and the other ingredients added. Also, if you are roasting tomatoes in a conventional or convection oven. Convection baking will reduce the roasting time by about ten to fifteen minutes.

Oven-roasted tomatoes are ready when the skins show signs of blistering, caramelization, crispy edges, or the skins are removed from the tomatoes' inner pulp. Also, cherry tomatoes will blister and burst when they are fully roasted.

Stove-top roasted tomatoes will show signs of completion when all the sides of the tomatoes show visual signs of caramelization or the edges are browned or charred. Also, another great indication is when the skins start to remove themselves from the inner pulp and seeds of the tomatoes.

Suppose you are using garden fresh tomatoes for the methods listed above. Always thoroughly wash each tomato with cold water and carefully inspect each one to ensure that there are no bugs or trapped bits of dirt hiding in the cracks or crevices of the tomatoes. Failure to wash the tomatoes could lead to a batch of poor quality roasted tomatoes that could cause upset stomachs or illnesses for those who are immunocompromised.

If you are using canned tomatoes- always check the expiration dates! If the can is expired, do not use it for roasting purposes. Consuming expired foods can cause serious harm. Never use any cans showing signs of botulism-- bloating, dented, or leaking cans are all signs of botulism and should be discarded immediately. 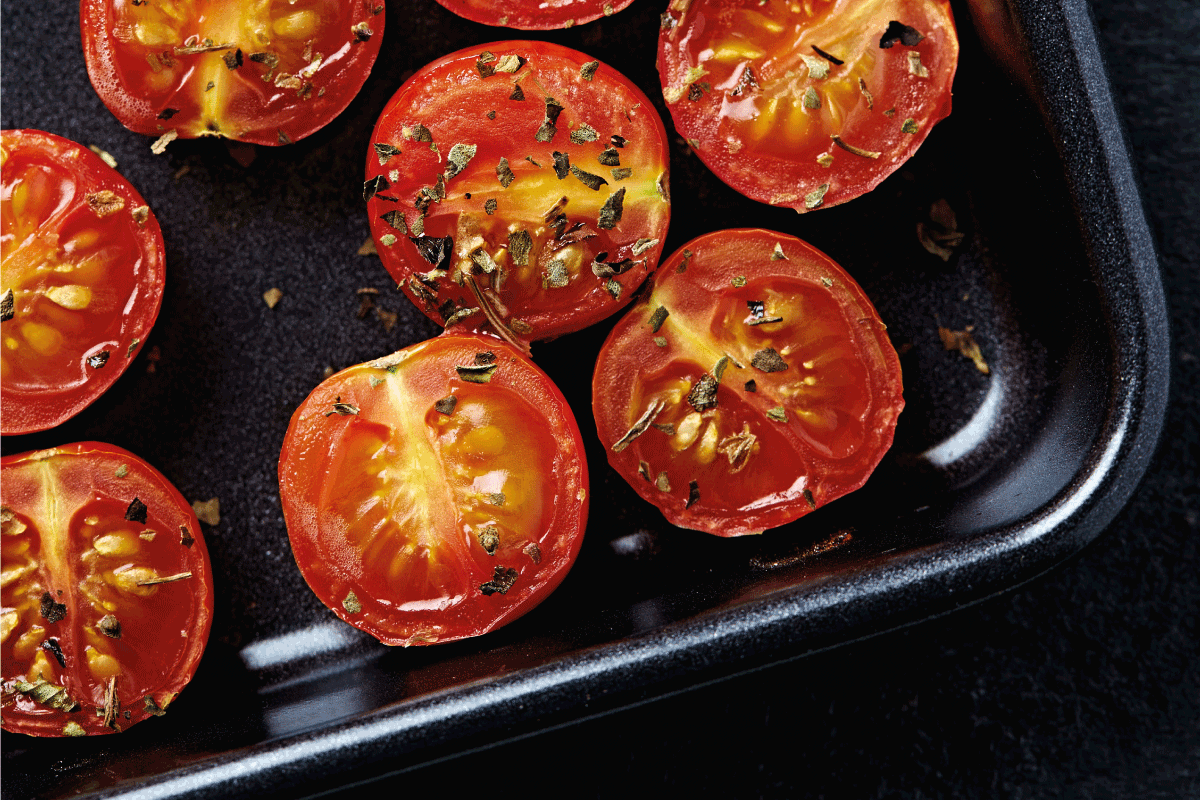 Roasting tomatoes straight from the farmers' market or your home garden is a great way to have cost-effective and nutritious tomatoes for dinner or a snack. We sincerely hope this article has helped you gain a few new culinary skills and tips. Please visit Kitchenseer.com soon for more exciting and useful content to further assist your culinary journey!

Should You Bake Potatoes In Foil?

How Long Do You Let A Lasagna Sit?

Should You Peel Yukon Gold Potatoes?