Jell-O is a fast, jiggly, fruity treat, but if you don’t have the time or the means to boil water, you might wonder if the gelatin will still come out the same way. Can you make Jell-O without boiling water?

You can use warm water to make Jell-O instead of boiling water, but the water will take longer to dissolve the gelatin powder and sugar. If you don’t allow the powder and sugar to fully dissolve, then the Jell-O could come out cloudy, chunky, rubbery, or gritty.

Ahead, we’ll further explore the implications of making Jell-O in warm water instead of boiling water. By the time you’re done reading, you’ll know what to expect if you stray from the traditional Jell-O recipe. 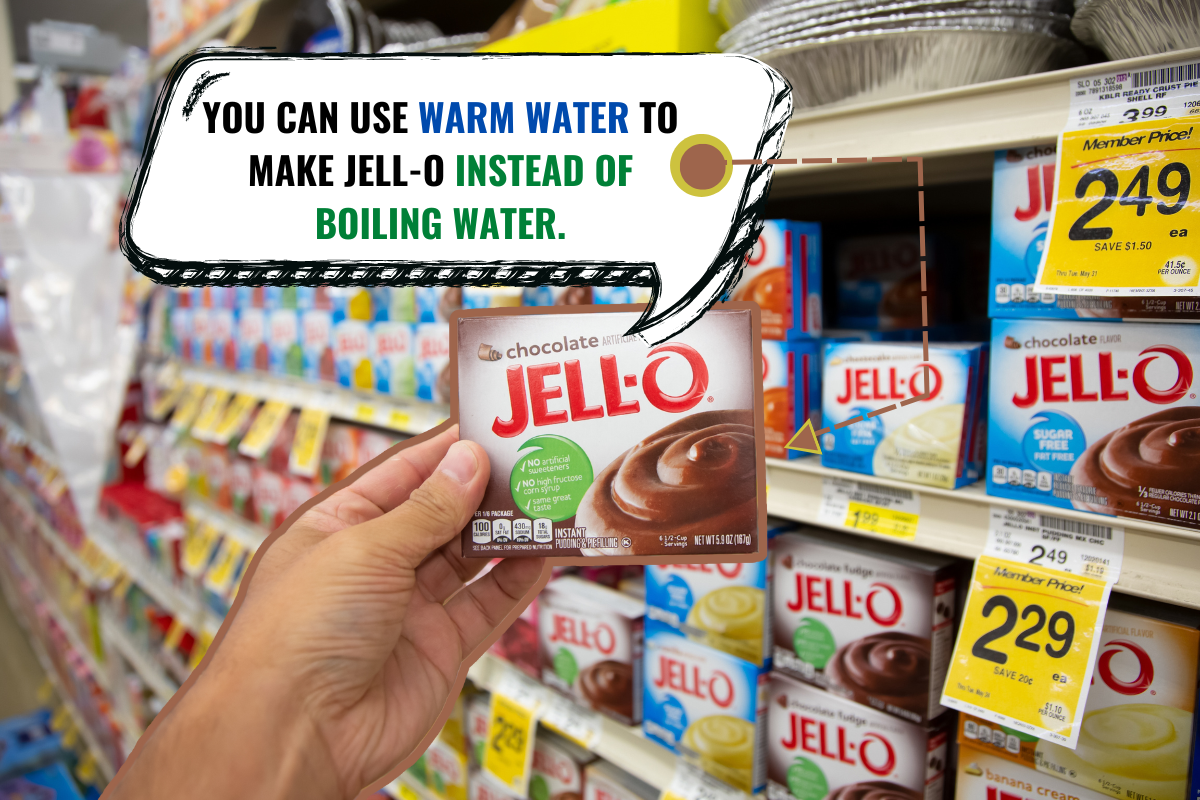 Why Does Jell-O Require Boiling Water?

Jell-O, when made from the box, requires only three ingredients: cold water, boiling water, and the Jell-O powdered mixture. Although sugar isn’t a required part of the recipe, it does help to mix the gelatin with the sugar to help it set.

The hot temperature of the water, which is approximately 212 degrees Fahrenheit, will dissolve both the gelatin powder and the sugar.

You’re supposed to help it along by stirring the Jell-O mix for about two minutes until you don’t see any clumps or lumps.

Can You Make Jell-O With Warm Or Hot Water Instead?

There are plenty of situations in which you might not have access to boiling hot water. Perhaps you’re in a hotel trying to make Jell-O (usually for Jell-O shots, although not exclusively!).

Maybe the power went out and yours is an electric stovetop, but you still have running water. You want to make Jell-O by candlelight. In the case of young children making Jell-O, they might be scared to handle boiling water.

In these cases and more, you can make Jell-O using warm water that’s at least 98 to 105 degrees, which is considered by many to be lukewarm. However, you have to keep in mind that some issues will arise, so let’s discuss them.

It Will Take Longer To Dissolve The Gelatin Powder 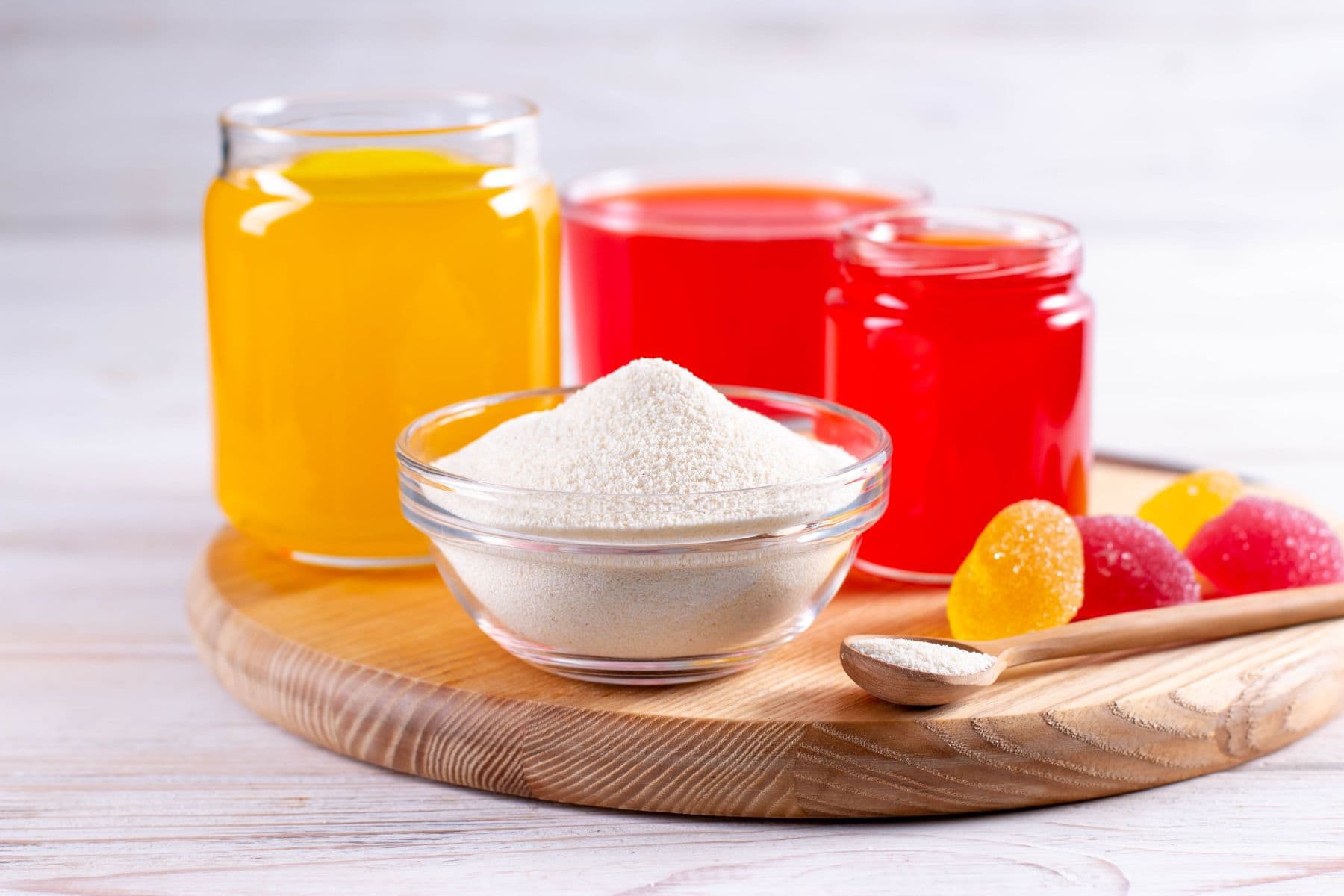 If you’re making Jell-O with warm rather than boiling water, you cannot follow the timeframe from the section prior to stirring the mixture for two minutes after pouring the water in. The gelatin powder on its own will take longer to dissolve in warm water, and that’s true for sugar as well.

You might have to double the stirring time, but it could possibly be even longer still. Make sure you’re eyeballing the mixture so you know when to stop stirring.

If you don’t properly mix the ingredients before continuing with the Jell-O recipe, then the first issue you’re going to notice is that your Jell-O doesn’t come out crystal clear the way it’s supposed to. Sure, you can see into it, but it’s more opaque than translucent.

Jell-O is not supposed to have a cloudy appearance, as it detracts from what Jell-O is—fruity, jiggly, and glass-like.

If your Jell-O is cloudy, it’s because the powder and sugar didn’t dissolve. The granules likely contributed to the appearance of the fruity treat.

The smoothness of jelly that you’re expecting when you make Jell-O can escape you if you fail to let the ingredients dissolve all the way. A lack of hot water can also contribute to the rubbery feel.

Rather than sliding effortlessly down the throat the way that Jell-O should, trying to nosh on your dessert would be more like chewing on a car tire, so it’s not pleasant at all!

It’s not only that partially dissolved gelatin and sugar are going to affect the look and texture of the Jell-O but the mouthfeel as well. Have you ever had gritty Jell-O before? Hopefully, you answered no!

Now is no time to start, but the gelatin granules and loose sugar granules will make their presence known in every unpleasant bite if you don’t dissolve them thoroughly enough.

Can You Make Jell-O in Cold Water?

Going back to the basic Jell-O recipe, cold water is required as well as boiling water. When you’re dissolving the powdered gelatin in boiling water, you’re supposed to mix in cold water and then refrigerate the Jell-O for at least four hours.

Why the cold water? It soaks through the gelatin granules and allows them to bloom. You should give the gelatin at least five minutes to bloom before proceeding with the recipe.

While cold water is a critical part of the Jell-O recipe, you can’t make Jell-O only with cold water. Yes, it’s part of the blooming process, but cold water does nothing to dissolve sugar or powdered gelatin. When the gelatin blooms in cold water, it’s not dissolving. The granules are swelling due to absorbing the water.

If you only used cold water to make Jell-O, you’d likely end up with the gritty, chunky, cloudy Jell-O mess we described in the last section.

Some form of hot water is required as part of the Jell-O recipe, ideally boiling water.

Can You Eat Jell-O Without Cooking It? 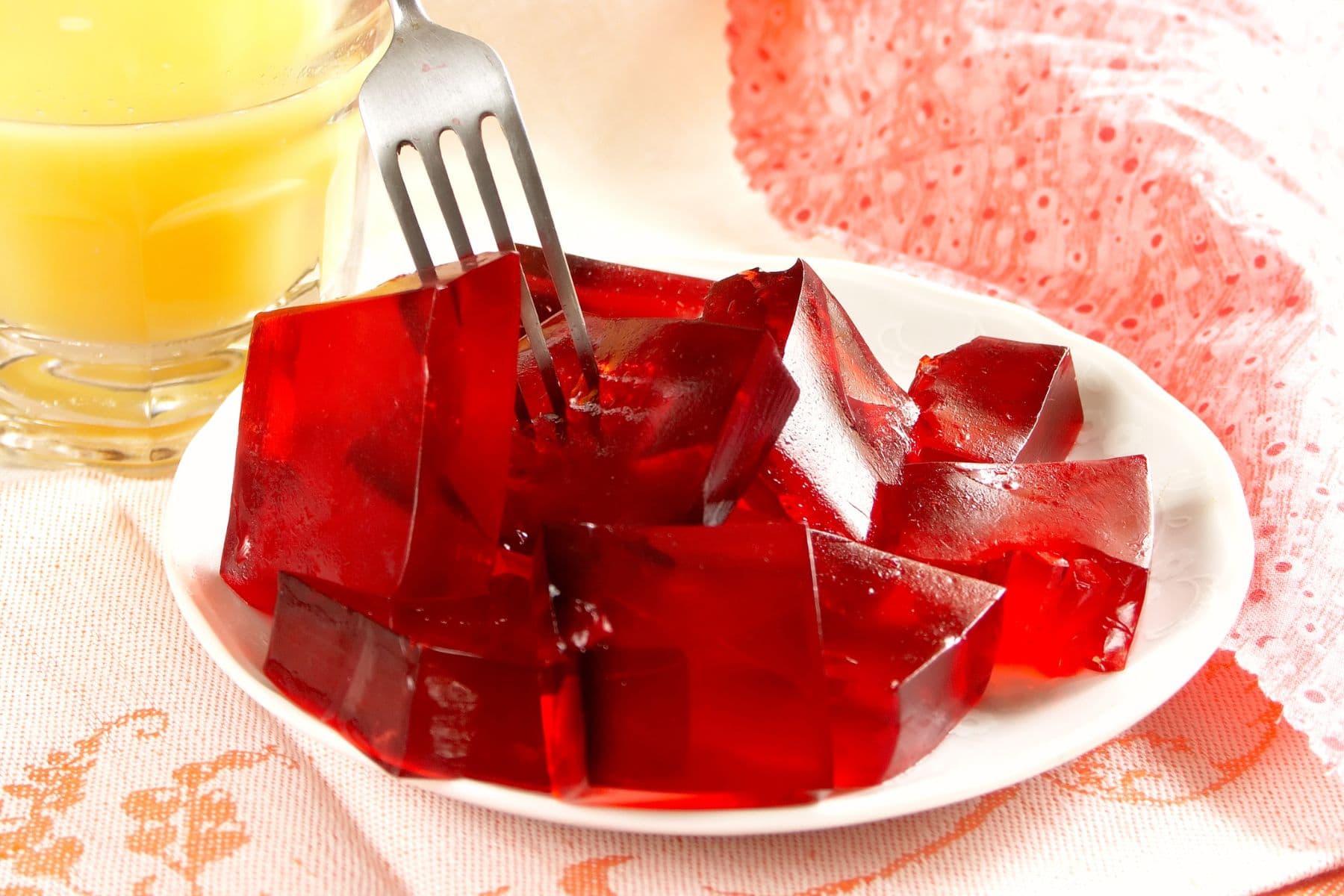 One of the reasons that Jell-O is such a popular dessert is that you don’t have to cook or bake it. As we discussed earlier, you do have to give the Jell-O several hours to chill and firm up in the fridge, but it’s essentially no-muss, no-fuss.

Jell-O makes for a very presentable dessert made on short notice, and it’s always good to have some of those recipes in your back pocket.

Let’s break it down a little further here. What if you made Jell-O but didn’t let it harden all the way in the fridge? It’s a cool liquid that’s definitely not set.

That’s edible as well. After all, the ingredients in Jell-O do not change by refrigerating them—merely the form of the Jell-O does.

Hospitals frequently serve liquid Jell-O to patients to get some calories in them since the liquid is easy to eat and tastes yummy.

Breaking it down a little bit further still, what if you ingested Jell-O in its pure powder form without any sugar or water? We can’t really think of any reason to do this other than curiosity, but let’s address it anyway.

The answer is not too much. Making the powdered gelatin congeal requires a much hotter temperature than your own body temperature. Your body would process the Jell-O powder, and you might get some calories out of it, but that’s about it.

What Prevents Jell-O From Setting?

Perhaps you’re having a different issue with your Jell-O. You were able to dissolve the gelatin powder and sugar easily enough, but the Jell-O just isn’t setting.

Jell-O is one of those desserts you cannot rush. If fewer than four hours have elapsed, then it’s not been long enough for the Jell-O to fully set.

In its partially set state, it might be jiggly but watery. If so, then give it another couple of hours and see what happens. It should be set by then. 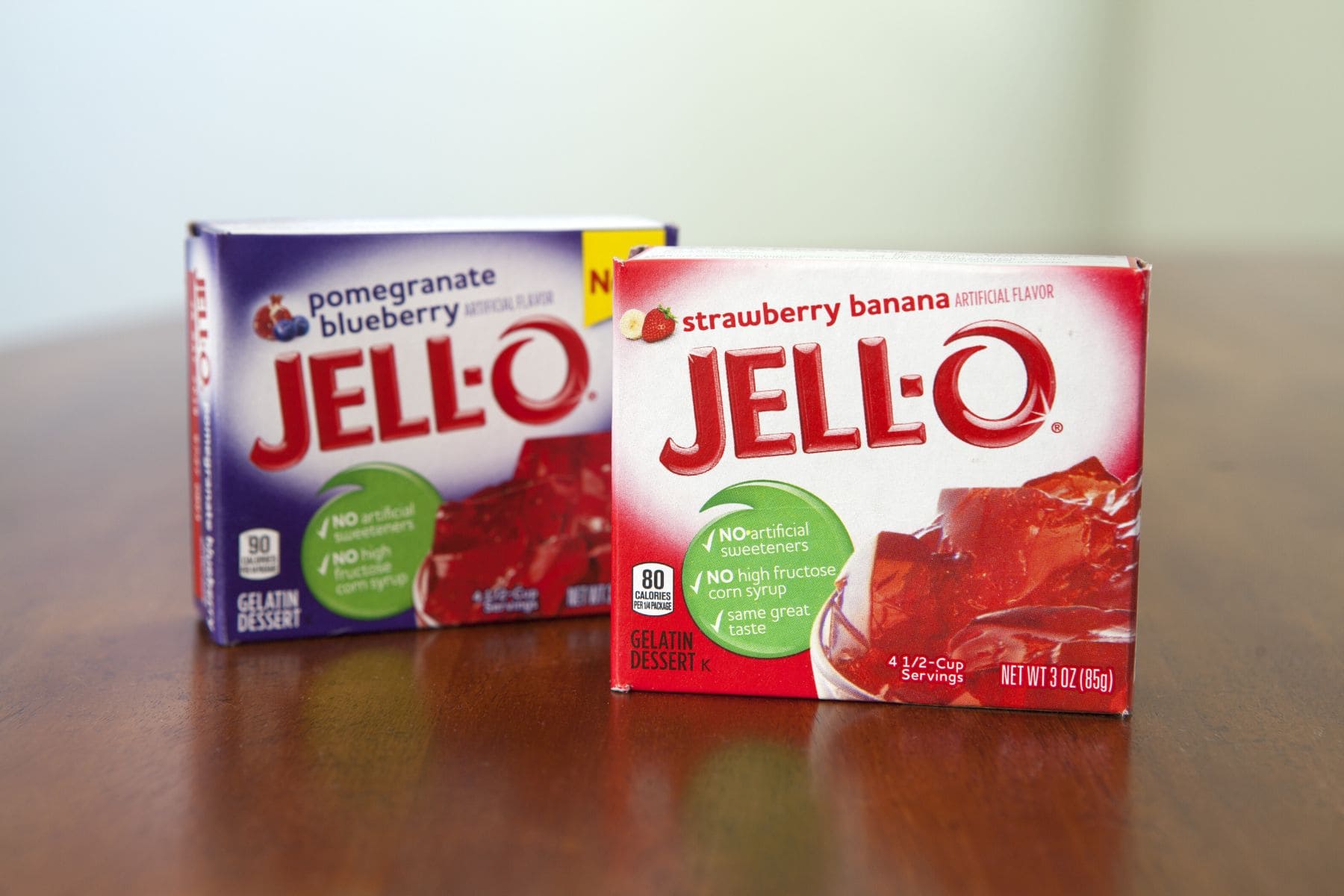 If the temperatures in your fridge surpass 70 degrees, then the Jell-O will never set. This fruity dessert needs colder temps to properly harden, so check your fridge thermostat and adjust from there.

Adding chunks of fruit is a great way to dress up Jell-O, but depending on which fruits you chose, the treat might not set properly.

The enzymes in fruits like pineapple, papaya, kiwi, guava, and mango disrupt the chemical bonds in the gelatin.

Using canned instead of fresh fruit eliminates this issue. You can also skip the above fruits, as other fruits, when fresh, will not cause the same Jell-O setting issue.

Making Jell-O without boiling water is doable but not advised. The boiling water ensures the gelatin powder and sugar can fully dissolve, which prevents cloudiness, a rubbery texture, and grittiness.

How Long Is Homemade Cheesecake Good For?

Gravy Too Thick? Here’s How To Thin It Out

How Long Does It Take To Cook Meatloaf?

What’s The Best Mozzarella For A Pizza?