You have heard that putting a knife or fork in the toaster is dangerous, and you are wondering if it is dangerous enough to be fatal. This is a good and important question that will be answered thoroughly in this post. You probably wonder what would cause someone to get injured when sticking silverware into the toaster, and this post will give you all of the details.

Sticking a metal object into the toaster can in fact kill you. If a person's feet are in contact with the ground, then the electricity will flow through the body and can cause the heart to stop. Sticking metal into the toaster is very dangerous and should always be avoided.

Now that you know sticking a knife or fork in the toaster can kill you, you probably have more questions. You might wonder whether it is dangerous to stick metal in the toaster when the toaster is off or unplugged. In addition, you might wonder how many volts of electricity is enough to kill a person. You might also wonder if there are any other safety hazards in your kitchen. Keep reading to learn more! 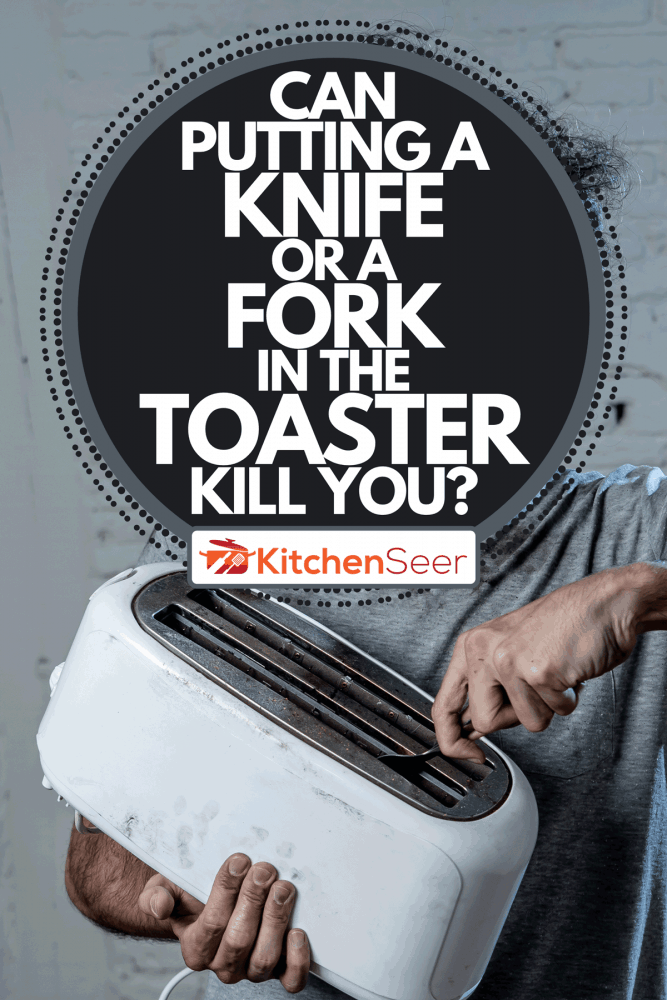 Can Putting A Knife Or A Fork In The Toaster Kill You?

Putting any kind of metal object into the toaster can kill you. The metal conducts electricity and can send voltage through your body if your feet are in contact with the ground. Some may falsely believe that once the toast has popped up, no electric voltage can be sent through the metal utensil, but this is misleading.

The only way to stay safe from electrocution is to not stick metal into the toaster while it is plugged in. However, that doesn't mean that it is a good idea to put the utensil into the toaster even when the device is unplugged. 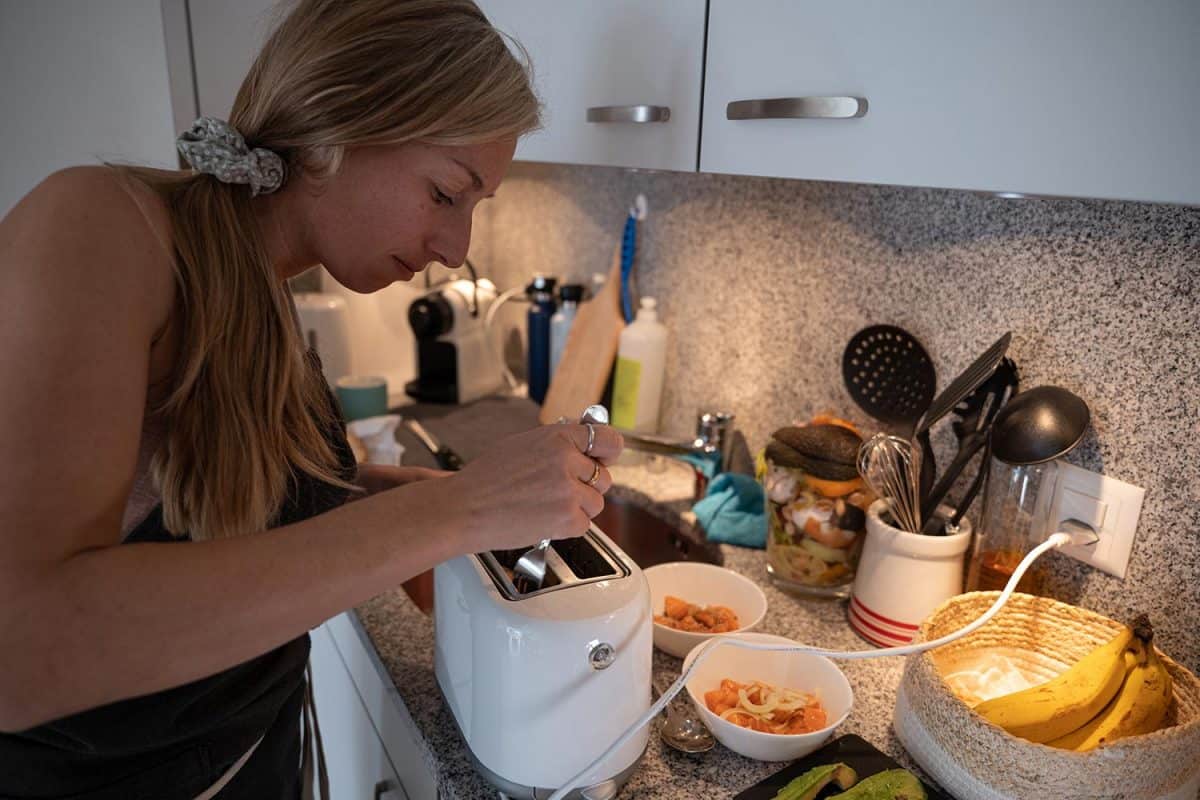 Can You Stick A Fork In The Toaster If It Is Unplugged?

Sticking a fork in an unplugged toaster will not cause electrocution, but it could cause a potential hazard in the future. The knife or fork could damage components in the toaster, which could cause fires in the future when you use this appliance.

If you are trying to remove stuck bread, then it is better to stick the fork in the bread that is above the toaster and pull it out. In this way, you are not sticking the utensil into the toaster, which could cause damage to the appliance. Always make sure the toaster is unplugged.

Why Is Putting A Fork In The Toaster Dangerous?

The coils of the toaster can send voltage through any conductor such as a metal utensil (i.e. a fork). If the toaster is plugged in, then you risk electrocution should the fork come in contact with electrical components inside the toaster.

This is always true, even if the toaster button is not pushed down. The coils may still be sending voltage that can be transferred from the fork into your body. As this voltage may run through your body, it has the potential to severely injure or even kill you.

For a detailed breakdown of how toasters work and their potential fire hazards, check out this article: Do Toasters Have Capacitors?

Can You Get Electrocuted If The Toaster Is Off?

How Many People Have Died From Putting A Fork In The Toaster?

The statistics tell us the number of people that die from toasters every year. However, it does not divide these deaths into specific causes (such as putting a fork into the toaster). Toasters cause 700 fatalities worldwide each year. In the United States, there are 300 deaths by toaster every year. The possible causes are fire and electrocution.

How To Safely Remove Stuck Bread From Toaster?

Make sure the toaster is turned off and unplugged. You can first try to push up the toaster lever to see if the stuck bread becomes more accessible. If that doesn't work, you may try tipping the toaster and gently shaking to get the toast out.

If this doesn't work, you can carefully use bamboo sticks or wooden tongs. In a situation where you must stick something in the toaster to get the bread removed, be sure that you don't shove the utensil into the electrical components of the toaster.

Click here to see this set of bamboo toaster tongs on Amazon.

How Likely Is It To Die From A Toaster?

Perhaps you have used a fork or knife to fish out broken pieces of bread at the bottom of the toaster. You don't remember getting shocked and are thinking toaster dangers are overstated. A toaster can kill you when you put a metal utensil inside, but that doesn't mean everyone that does this will end in shock or death.

Kitchen and home appliances have come a long way in providing safer devices that work to prevent electrocution. Electrical outlets also have safety features to prevent fatalities from electrocution. A ground fault circuit interrupter is often used where outlets could come into contact with water. This safety feature will cut off the power as soon as an imbalance is recognized. This should prevent any kind of fatality from electrocution when working properly.

A 120-volt outlet can kill you if the current travels through your nerves and reaches your heart. This can only happen when you latch on. In most cases when people get an electric shock, they are able to release grip on the conductor which minimizes bodily harm. However, there are instances where you can become a conductor for the electrical current to pass through. When this happens, it is often difficult to let go, and severe injury or death can occur.

How To Prevent Fires From Toasters

The first thing to remember is that you should not stick anything into the toaster to remove stuck bread, because it can damage the electrical components of the appliance. When using your toaster, only put items that are meant to go in the toaster. Only use bread or items that are narrow enough to fit in the slots without getting stuck. This will prevent the temptation to stick a utensil into the slot which may cause a fire hazard at a later time. 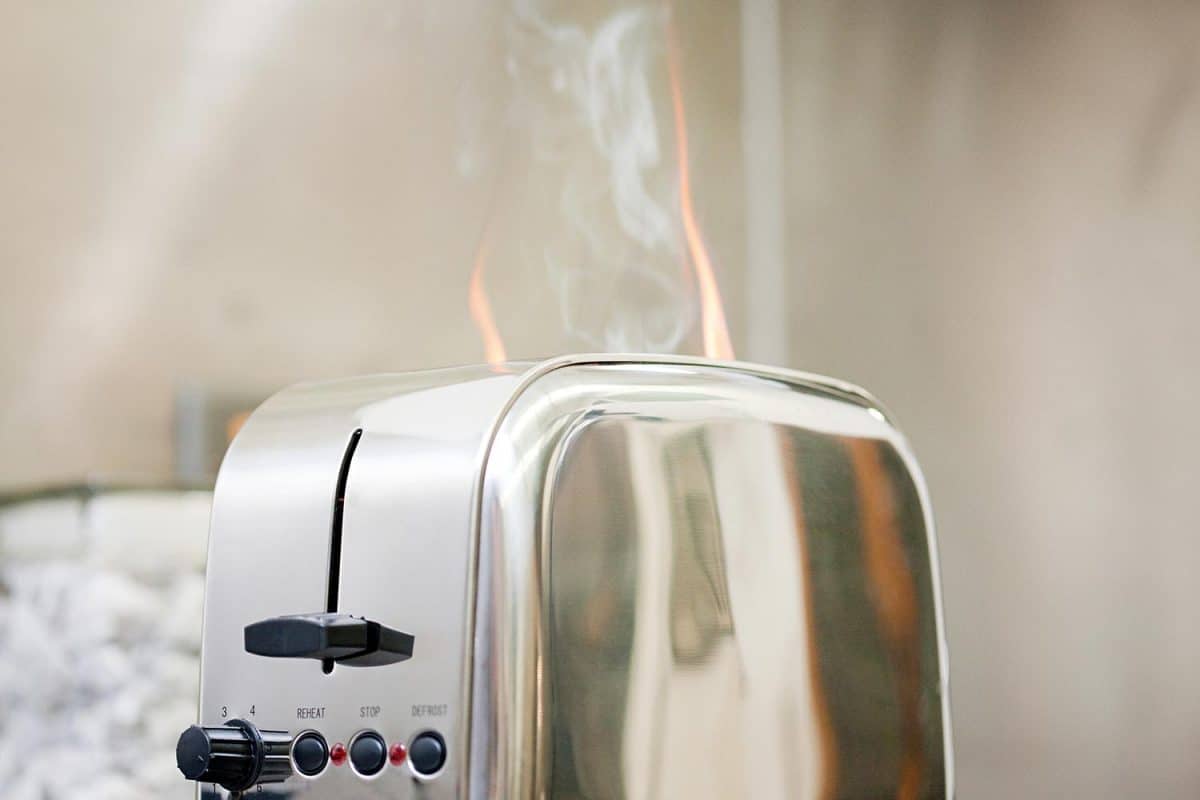 Make sure your toaster is far away from any water source, such as your kitchen sink. Make sure it is not placed in the splash zone or any area where you might spill liquids. Remove any flammable items that are near the toaster to prevent fires.

Toasters are very quick to complete the job, so it is recommended that you do not leave your toaster unattended while in use. A toaster timer can fail which can cause the heating elements to be on for several minutes and possibly cause a house fire.

For fire a fire safety fact sheet regarding toaster ovens and similar kitchen appliances, check out this sheet from the Yale University Fire Marshall.

Click here to see this toaster shield on Amazon.

How To Clean A Toaster To Prevent Fires

Cleaning out the inside of your toaster must be done correctly to prevent any fire hazards. For a detailed explanation on how to clean your toaster for more efficiency and to reduce fire hazards, check out this post:  How To Clean A Toaster [6 Steps]

How To Get Rid Of Pantry Bugs Naturally [5 Crucial Tips]

How Often Should A Pressure Cooker Vent?