As you're roaming around the kitchen, you might take a special interest in your toaster. It's so simple to operate it makes you wonder how it works. What parts make up this magical tool? More specifically, does it have capacitors? If that's what you'd like to know, let's find out!

Toasters do, in fact, contain a capacitor. Though, not all toasters are the same. Some use alternative measures to generate enough heat for your toast. Regardless, capacitor toasters work in unison with other parts in a circuit board. As the bread toasts, the capacitor charges until it reaches a voltage which signals it to cut off power.

Although they might seem like simple appliances, there's a lot that goes in a toaster. As mentioned, not all toasters are the same. Finding out which applies to you can be beneficial in your toasting endeavors. So, if you'd like to learn about the process, keep reading ahead. 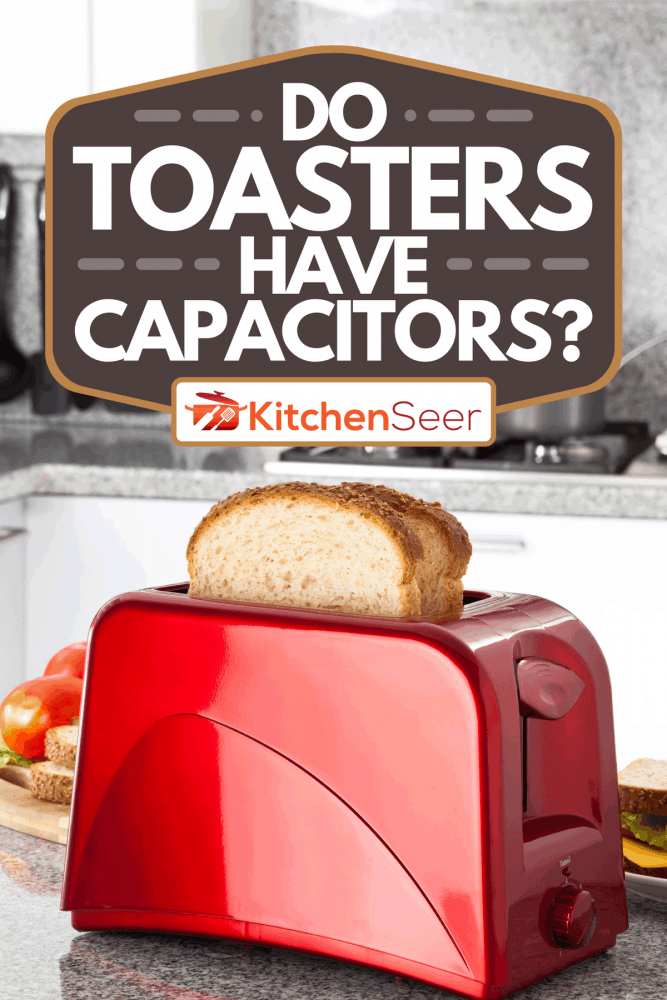 How Does an Electric Toaster Work?

So, if you're curious about how modern toasters work, let's first start at the beginning. When you pull down the handle, it presses against electrical contacts. The electrical contacts apply electricity to the circuit board. Here, it comes in contact with another component. 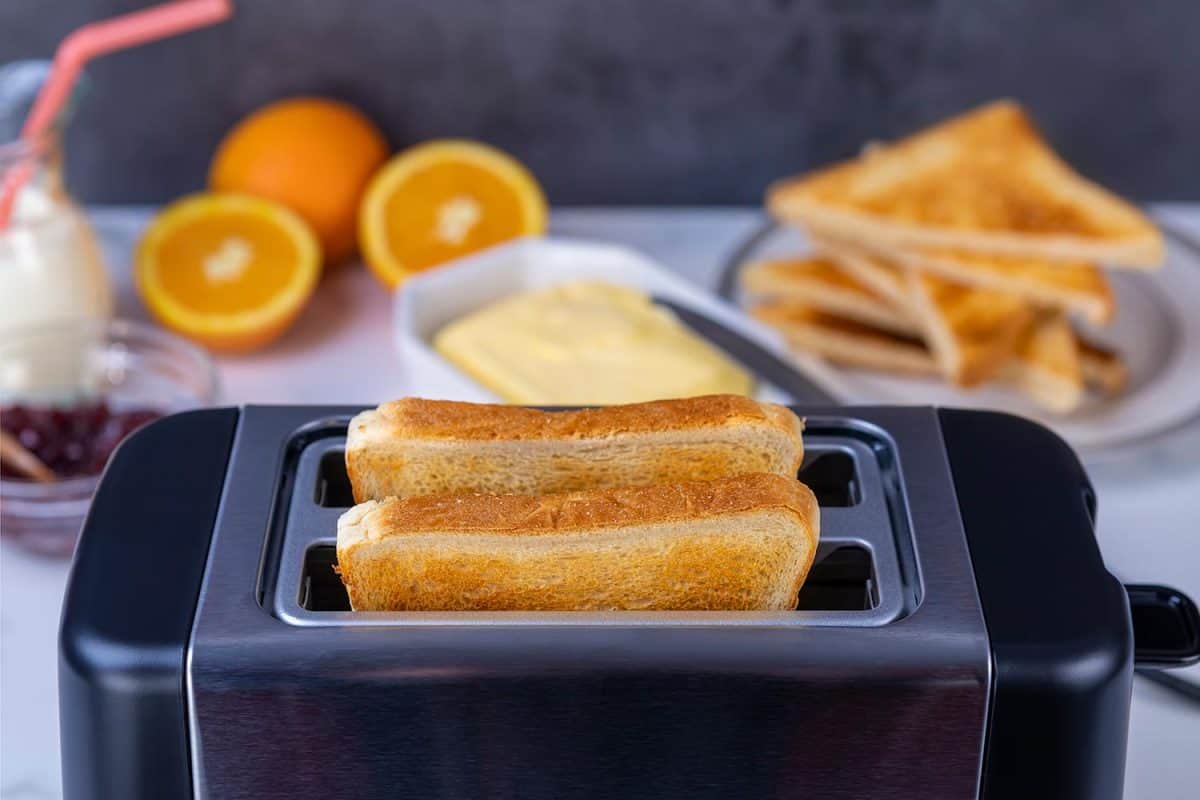 Do Toasters Use Nichrome Wire?

If you wonder if toasters work with nichrome wires, they do! For those that don't know, nichrome wire is an alloy composed of nickel and chromium. The reason it's present in a toaster is because of its resistance to heat, corrosion, and electricity. Toasters use coils of nichrome wire to generate enough heat to toast your bread. They're even present in toaster ovens and storage heaters.

Now, let's bring it back to how toasters work. Once you press down on the handle of a toaster, you send 120 volts of power through the electrical contacts into the nichrome wires. Here, it generates heat to start toasting the bread.

The capacitors come into play along with other parts like the transistors and resistors. They work together on a circuit to supply power to an electromagnet. The electromagnet holds the bread in place by attracting the piece of metal on the handle.

From this step onward, the circuit begins to act as a timer. During this process, the resistor charges the capacitor. As it charges, it will reach a point where the capacitor will shut off the power. Once it meets a certain voltage, the power to the electromagnet goes off.

At this point, the electromagnet cannot hold the toast in place. So, two springs immediately shoot the bread up. The handle also releases. On the way up, the handle cuts off the power to the toaster.

Ding! You have your toast!

Since you are curious to know if toasters have capacitors, are there toasters that do not use them? Yes, this pertains more to older models. They work differently than modern toasters. These heat up and cuts off electricity using a bimetallic strip.

As the strip heats up, it begins to expand and bend. It bends enough to disconnect the circuit. In the end, this process cuts off the power and makes the toast pop up.

In these toasters, the dial also controls the amount of electricity. The difference being, a lower number indicates a higher current resulting in turning the off-switch quickly.

In general, toasters use a capacitor as a timer to toast bread. However, as we mentioned, not all toasters are the same. Some brands like Dualit use mechanical timers instead of capacitors to do the job.

For a quick recap on capacitor toasters, the dial indicates the darkness of the toast. So, once you set it on a number, one component determines how fast the current travels to the capacitor. Once the capacitor reaches a certain amount of volts, it shuts off power.

Timer toasters function differently. As Dualit claims, the dial on their toasters indicates minutes, not current. It's a combined effort of the toaster and you! It includes an ejector knob so you can raise the bread when you want.

How Do Toasters Use Resistors?

As you have read, modern toasters use a circuit board that holds a capacitor, transistor, and resistors. But, how do toasters use a resistor? The resistor charges the capacitor. Still, it does more than just charge.

When you adjust how dark you want your toast to be, you do so by turning a dial. This dial connects to a variable resistor. In essence, the resistor controls how fast a current travels to the capacitor. So, when you turn the dial for a darker toast, you increase the resistance.

All in all, you increase the resistance, which generates more heat resulting in a darker toast.

Does a Toaster Use Radiation? 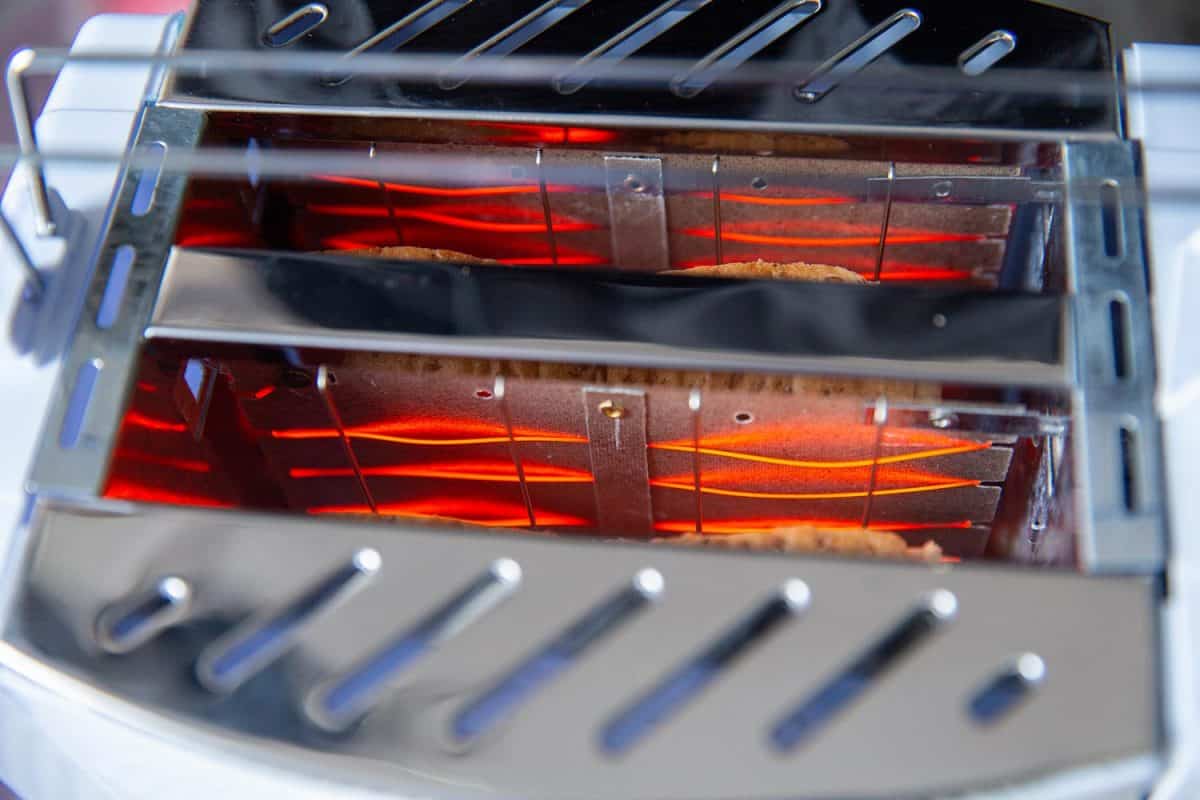 The way it works is by using the nichrome wire. If you have ever looked inside a toaster while it's doing its job, you might have seen a red glow. It's the nichrome wire wrapped on a mica sheet producing infrared radiation. It dries and chars the surface to toast your bread.

How Much Electricity Does a Toaster Use per Month?

The amount of electricity a toaster uses depends on the brand and model. You can check the toasters manual to get an accurate picture of the wattage is uses. In general, toasters will use around 800-1500 watts of power.

There are two types of models that you will come across when choosing a toaster: 2-slice or 4-slice. The 2-slice variant consumes between 700-1100 watts. Four-slice toasters reach the higher end of the range. They can use up to 2500 watts of power. Though, it will typically use around 1500 watts.

If we want to get an accurate reading of your specific situation, you'll need to look for the wattage usage in the manual. From here, we will need to do a bit of math to get our results. Using the wattage you've found in the manual, we'll have to plug it into this formula: Watts x Hours / 1000.

This gives us a result of 0.6 kWh daily. Assuming you use the toaster every day, you will spend $2.34 per month. Of course, this amount you spend may vary depending on the model of your toaster and the electricity rates of your state.

Is It OK To Leave a Toaster Plugged In All the Time? 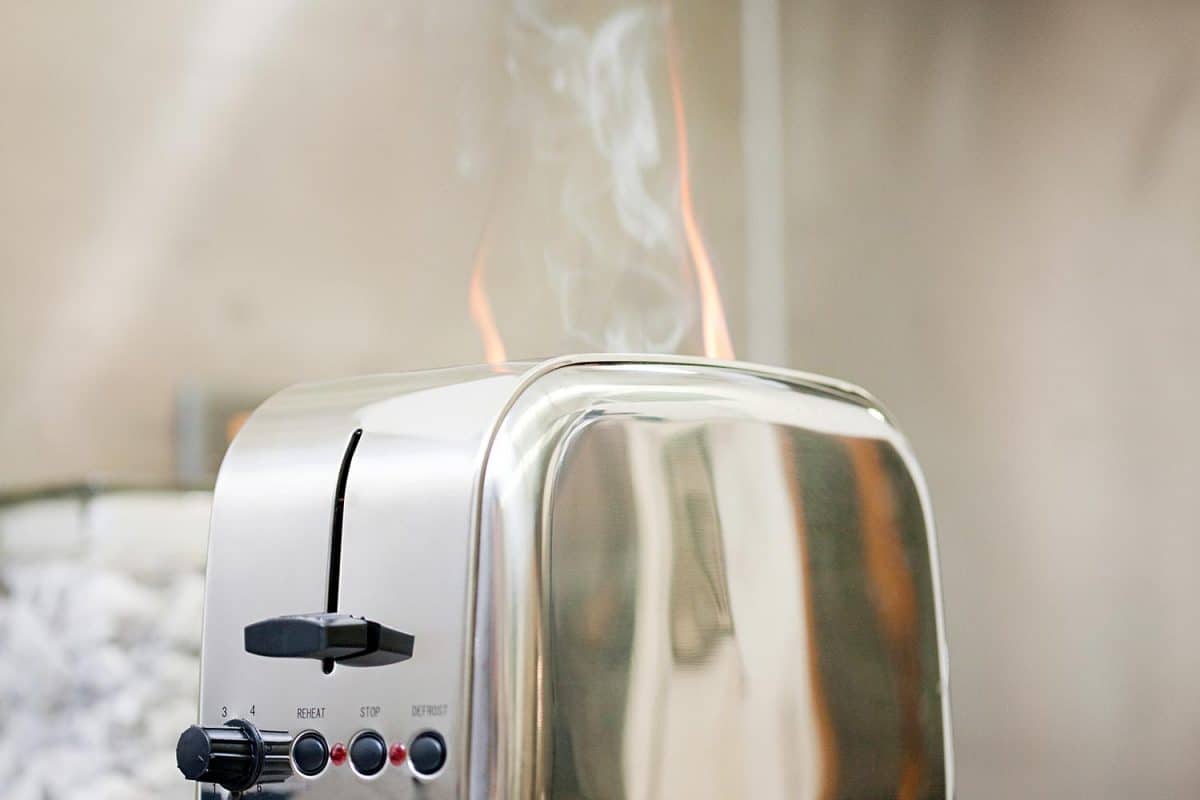 When we're in a rush, it's tough to justify unplugging an appliance because we want to save time. It's much easier to leave it plugged in and ready to use whenever we want. However, that is not the case with toasters. There's a reason manufacturers recommend unplugging the machine once you finish using it.

The reason being that it can malfunction at any point. When you least expect it, it can spark and produce flames. As some suggest, it happens because the heating element was energized even with the handle up. This situation causes the toaster to overheat.

In some cases, users have reported that the toaster did not stop heating up after finishing the cycle. In addition to unplugging your toaster, there are other safety practices you should follow. For example, the crumbs that the bread leaves behind.

It might seem like a trivial task. But, too much buildup of crumbs can catch fire. This situation applies during and after the toasting operation. So, after unplugging the toaster, make sure to clean out the crumb tray.

Is It Cheaper To Use a Toaster or Grill? 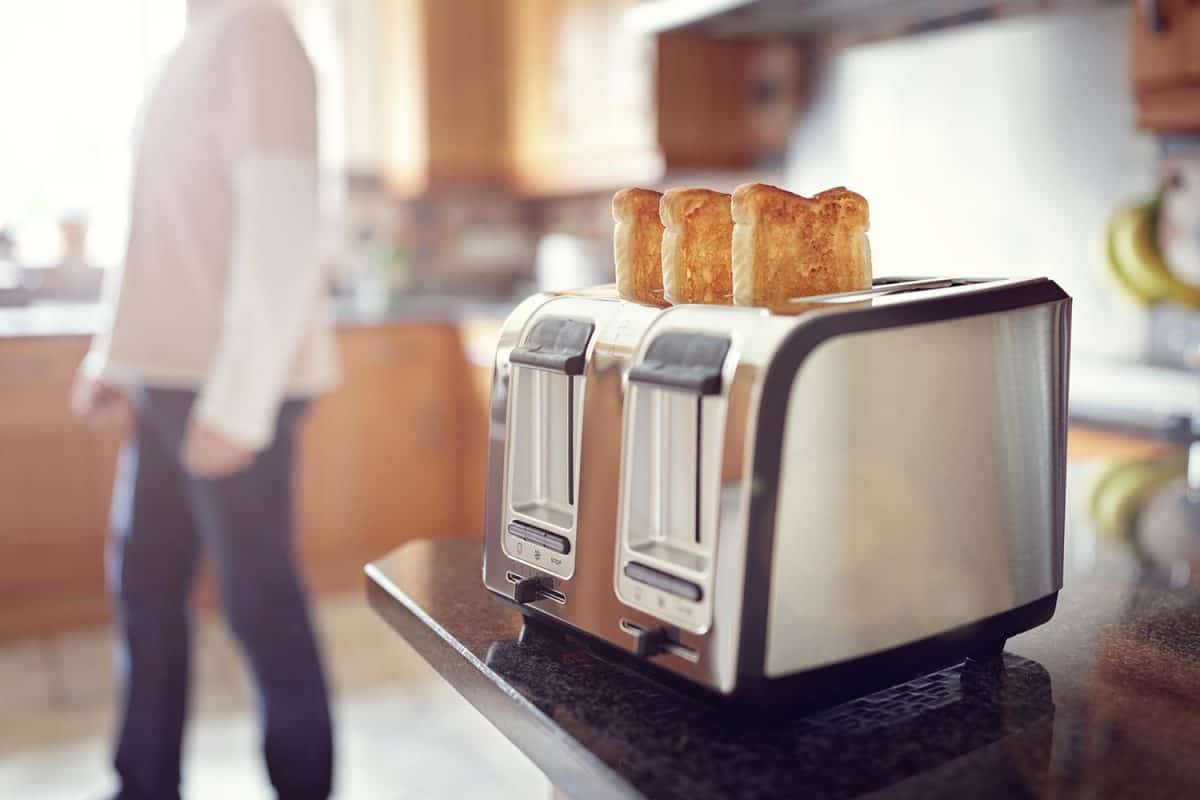 If you have a tough time choosing between a toaster and a grill regarding costs, the answer is simple. A toaster is more energy-efficient than a grill. Some forum users had found it costs around 3/4ths of a penny to toast bread using a toaster.

Learning about how an appliance works is always an interesting topic! In the case of toasters, there are signs of the evolution of how it works. While old models used a bimetallic strip, modern toasters use a capacitor as a timer. And now, some variations use a mechanical timer instead. We hope you found the article above insightful!

Before you go, do you have other toaster concerns? It's crucial that you maintain your toaster to prevent fire hazards. If you'd like to know how to do so, check out our post here.

Additionally, if you own a Keurig, you might also be curious if it's safe to leave plugged in. We have the answer! To find out more, check out our post here. Until next time!

Can Corelle Dishes Go In The Microwave?

Can Paper Plates Go In The Microwave?