Enchiladas can be a dish that wows the crowd. But, for some, it's a complex dish to execute. In some attempts, the enchiladas might come out soggy. So, we look for ways to ensure they come out in a way that would please everyone! If you're wondering if you should fry flour tortillas for enchiladas, let's take a look.

Frying flour tortillas beforehand is a common practice when making enchiladas. It's how they're traditionally made in Mexico! Lightly frying the tortilla before preparing the enchiladas will prevent it from soaking up too much sauce. So, as a result, you'll end up with enchiladas that aren't soggy and are less susceptible to falling apart. Additionally, it adds a bit more flavor to the dish.

Now that you know to fry tortillas before embarking on preparing enchiladas, there might be more you want to know. As we mentioned, lightly frying them is a step from how they traditionally make in Mexico. Learning how authentic enchiladas are made can help you improve yours! You might want to know what type of tortilla is best for the dish. If you'd like to up your enchilada game, let's in our quest for greatness. 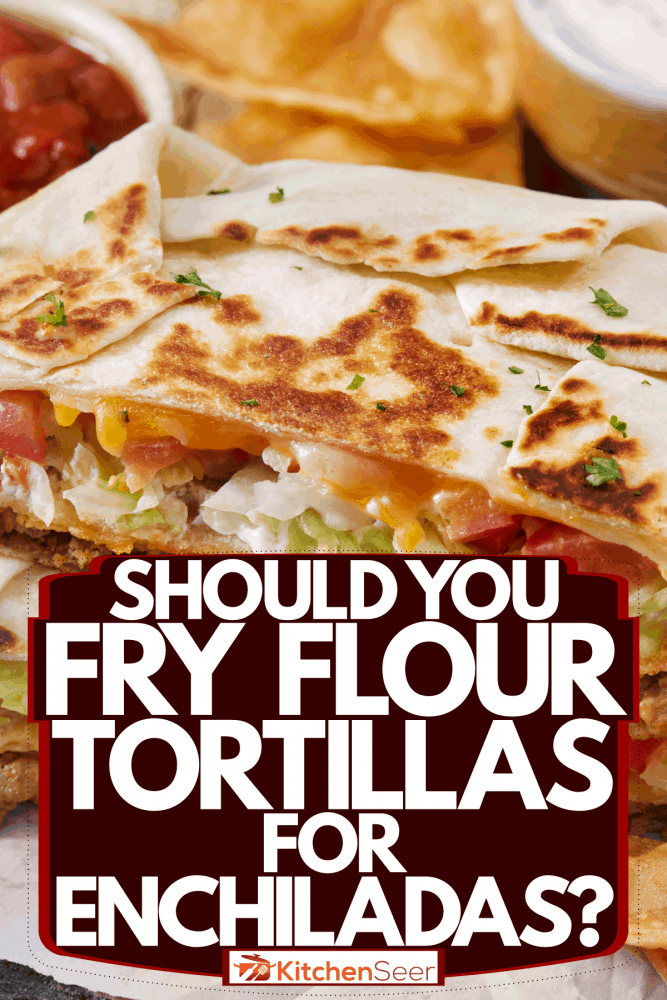 How Do You Keep Flour Tortillas From Getting Soggy in Enchiladas?

Enchiladas are great when they don't fall apart easily. When they do, it becomes way too much of a mess to eat. Instead of enchilada, it becomes an entirely new dish! It won't have the same experience as eating authentic enchiladas.

So, what can we do to prevent them from getting soggy in the first place? You can start by lightly frying the tortillas before preparing the enchiladas. The trick you must understand here is, we're not frying it to make it crispy. 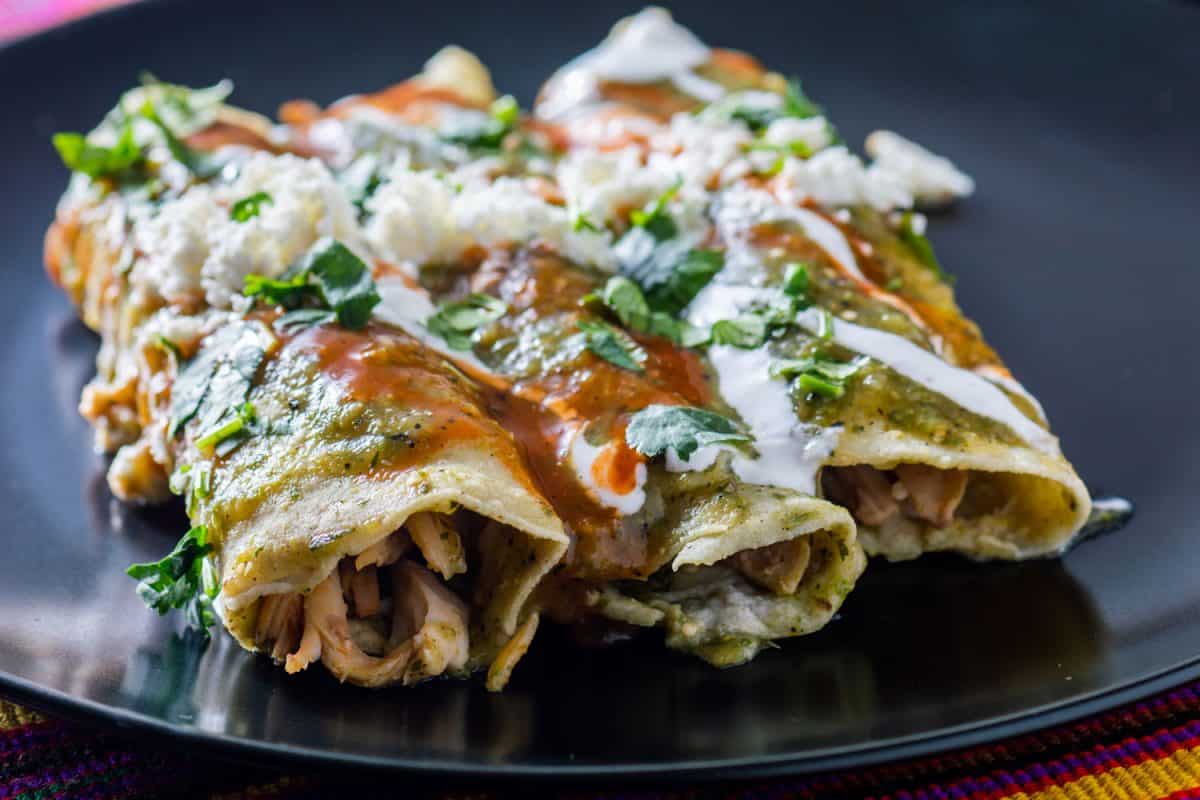 What we mean is that they should not be as crispy as a tortilla chip. Instead, the goal is to let it slightly crisp and darken in color. Overall, we're trying to make the tortilla easy to roll.

So, in Mexico, cooks fry the tortilla for 8-10 seconds on each side. They flip it often until it darkens in color and crisps up. Here the goal is to create a better structure that holds up when you roll it.

When you try to roll it without frying, it will most likely break down the middle. Additionally, it might soak up too much sauce. So, it weakens the structure of the tortilla.

All in all, lightly frying the tortilla brings three benefits to the enchilada. First, it provides a firm coat to prevent it from soaking too much sauce. Second, it adds flavor. Since you're crisping it slightly, the sugars present in the tortilla will begin to caramelize and break down proteins.

Lastly, rolling is more simple this way. The most common problem when dealing with tortillas is the structure. Sometimes it's too rigid to stay intact. So, frying them for a couple of seconds allows them to soften and stretch better than they typically would.

How Do You Fry Flour Tortillas for Enchiladas? 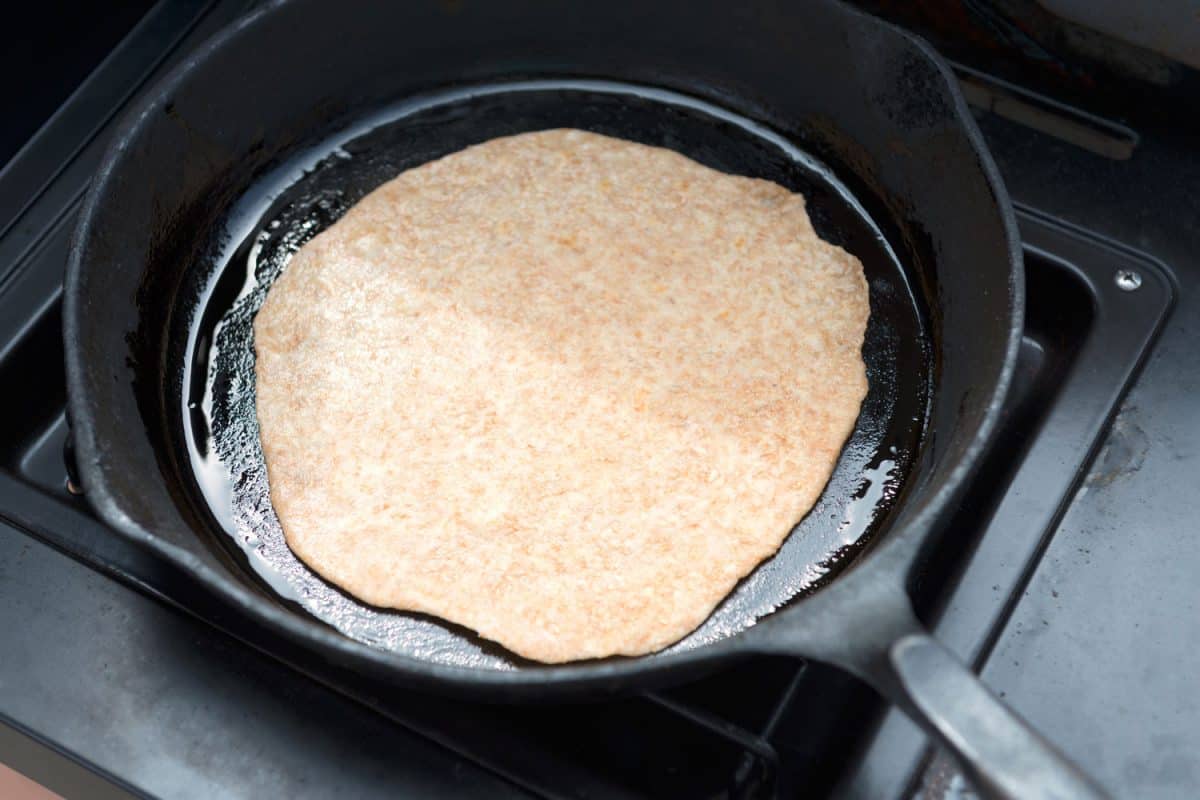 Although we mentioned how authentic Mexican enchiladas are cooked, you still might need more details. For example, how exactly do you fry the tortilla for enchiladas? What do cooks mean by quick frying? Quick can be subjective. So, it might be challenging to know when it's ready to go!

Let's go over how to fry the flour tortillas in detail! To fry the tortillas, you'll need to:

Again, it's hard to have a guideline that applies to every situation. So, you must look at all the possible options before deciding which one works for you. As mentioned above, the frying time will vary. So, you might have to do some testing on a couple of tortillas to find the correct timeframe.

Should Enchiladas Be Made With Corn or Flour Tortillas? 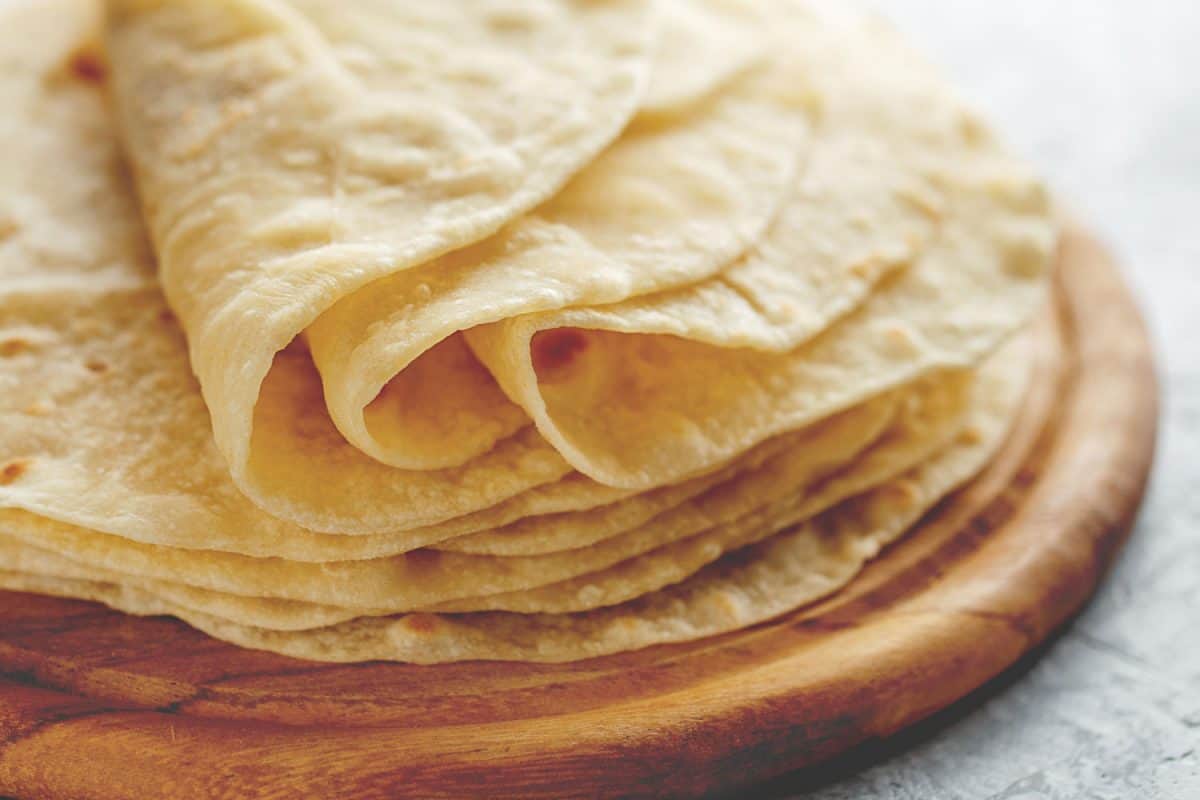 Choosing the type of tortilla depends on what taste you want to get out of it. Corn and flour tortillas will present different flavors to the dish. Additionally, both hold benefits for the other.

If you're following an enchilada recipe, it's best to use the tortilla it calls for. Otherwise, if you're choosing between a corn and flour tortilla for another reason, let's see how they stack up.

Regarding calories, corn tortillas tend to have less than flour ones. In general, each corn tortilla will have 159 calories compared to the 304 of a flour tortilla.

On the nutritional side, corn tortillas are made with whole grains, less sodium, fewer carbs, and more fiber. Structurally, some suggest they can break down quickly. Again, your experience will vary. Some recipes will call for corn tortillas over flour even if they don't hold up too well!

On the other hand, flour tortillas hold almost twice the amount of fat than corn ones. They contain less fiber too. On the more positive side of things, flour tortillas have more calcium and iron. Aside from being fluffier, they also hold rather well under lots of toppings. Therefore, they're an ideal option to use for enchiladas.

Which One To Choose

Lastly, they both present a size difference between each other. Corn tortillas are smaller than their flour counterparts. So, it might require more prep work than a flour one.

Why Do My Tortillas Fall Apart When I Make Enchiladas?

Regardless of the frying technique, there might be more reasons why your enchiladas are falling apart. The crucial aspect that you should address is the temperature. You want to soften the tortilla by warming it up before you roll it.

Still, even if you employ the frying technique, it might not be enough to warm up the tortilla. So, you might want to try an extra step to ensure your enchiladas don't fall apart. To do this, you might have to warm it in a comal first!

If you're not familiar with what's a comal, it's a flat cast-iron disc with a handle. You will want to warm the comal at medium-high heat. Then, take your tortilla and place it on it. Again, the goal is to warm up the tortilla. So, to ensure the heat spreads evenly, occasionally flip them.

However, if you want to employ both strategies, you will only need to warm the tortilla on the comal first. As some suggest, after making the tortilla pliable on the comal, you can also fry it. Though, it won't be for 10 seconds like the steps above. Instead, it will be for a short amount of time.

Let it fry for 3 seconds or less on each side. Then, transfer it onto a paper towel and dab off the excess oil. As a result, the tortillas should have a soft yet, crunchy texture. However, it should not be too crunchy. Regardless, this strategy might take some practice before you pull it off.

If you have time, you can try making the tortilla pliable through the comal first. Depending on the results, you should then opt to use the frying method. Finally, if neither strategy works independently, combine them both. This way, you explore what option works the best for the tortillas you are using.

Like most dishes, enchiladas can be a difficult meal to prepare. Since you have to coat them in sauce, it might seem impossible to prevent them from falling apart and becoming a soggy mess! Though, with some research and a bit of strategizing, you can prepare enchiladas anyone can be proud of. We hope you found the information above helpful.

Are you planning on using a microwave instead of a stove? You can also use a tortilla warmer inside a microwave! If you'd like to learn how to do so, check out our post here. Until next time!

Can You Place Pizza On Oven Rack?